We're visiting Petrified Forest National Park! We've already explored the visitor's center and a small trail behind it. Now let's go check out a bit more of the park! 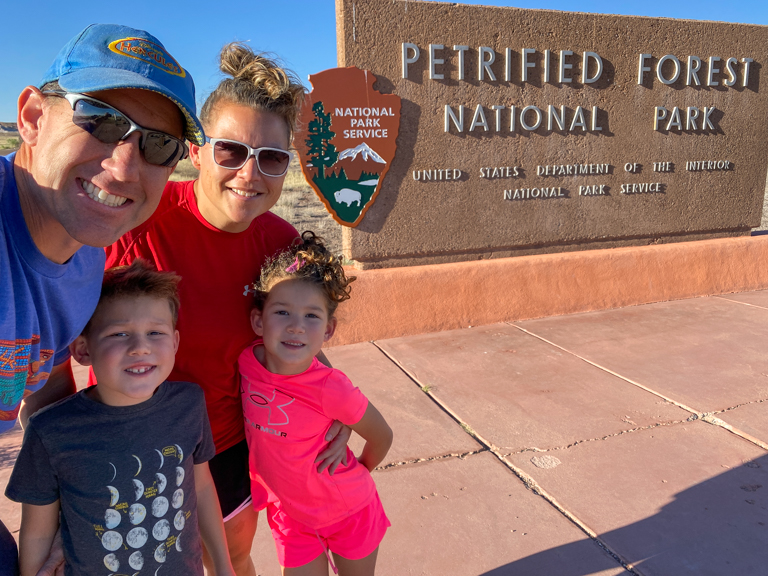 This park actually has gates that close, not letting people in after a certain time. Perhaps they don't want anyone coming in and taking off with their petrified wood in the night. They make sure to remind you to be on your way out so you don't get trapped inside. We later spoke to an employee at the store that said they are automatic gates though, so they'll open from the inside. 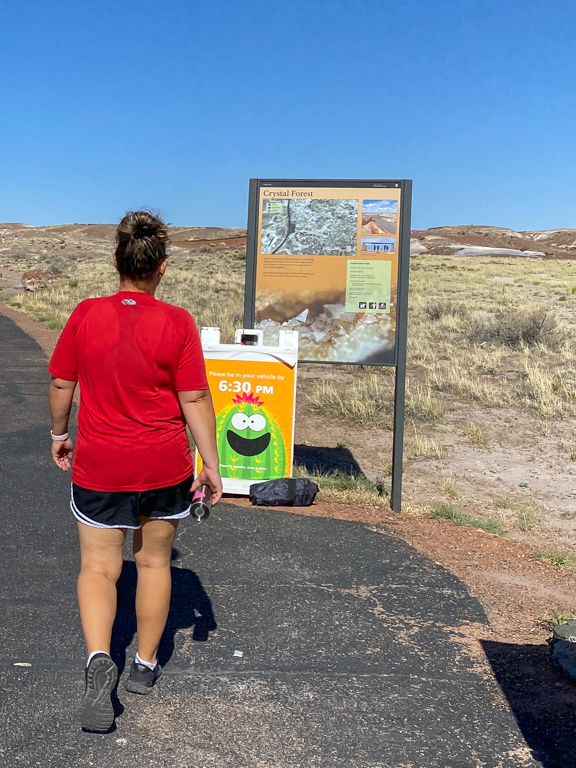 First we're going to hike along the Crystal Forest trail. It's less than a mile, but it's hot outside! Good thing I'm carrying lots of water. 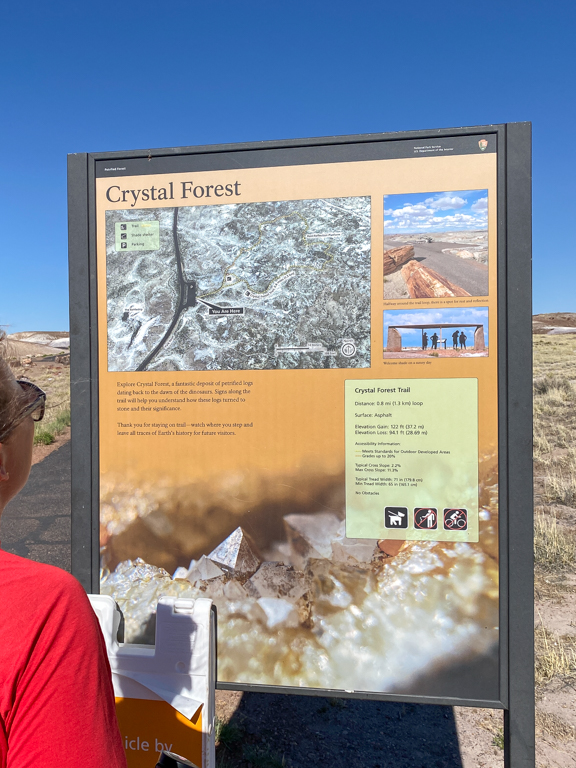 There's a whole bunch of these giant petrified logs along the way. 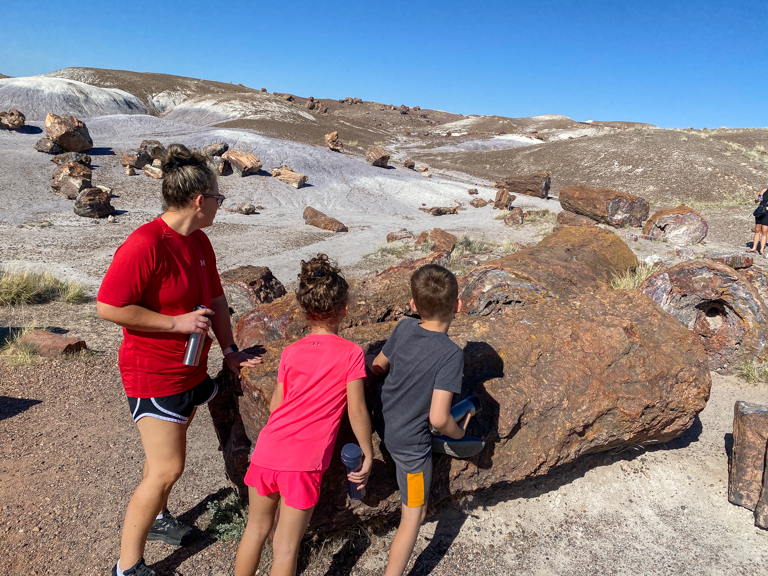 Who is cutting these logs?
Actually it's Mother Nature. The rocks get buried in the earth, and then sometimes the earth shifts. If it was wood it might bend or break, but since it's rock, it fractures, forming these nice disks. 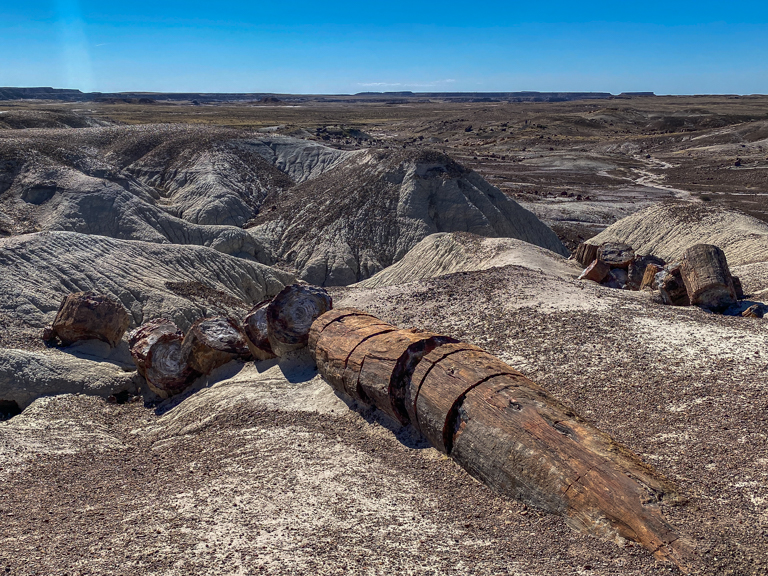 You can see the valleys. 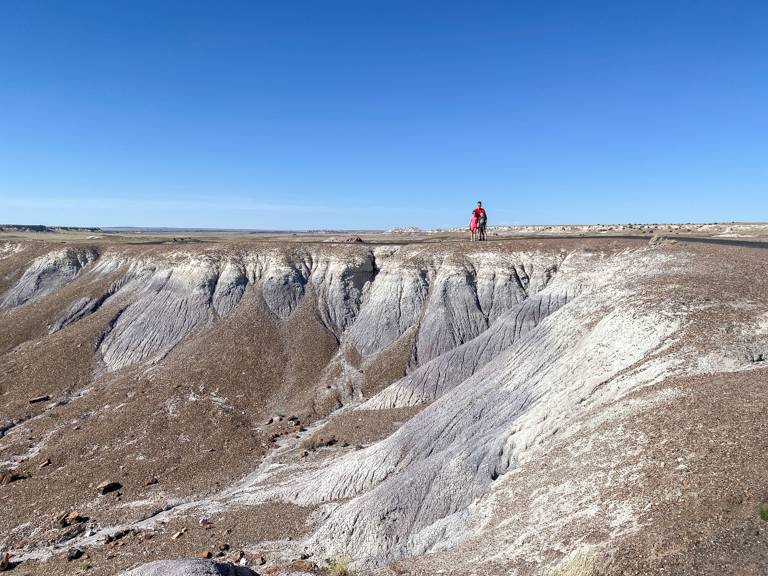 Some of these logs have amazingly saturated and brilliant colors. 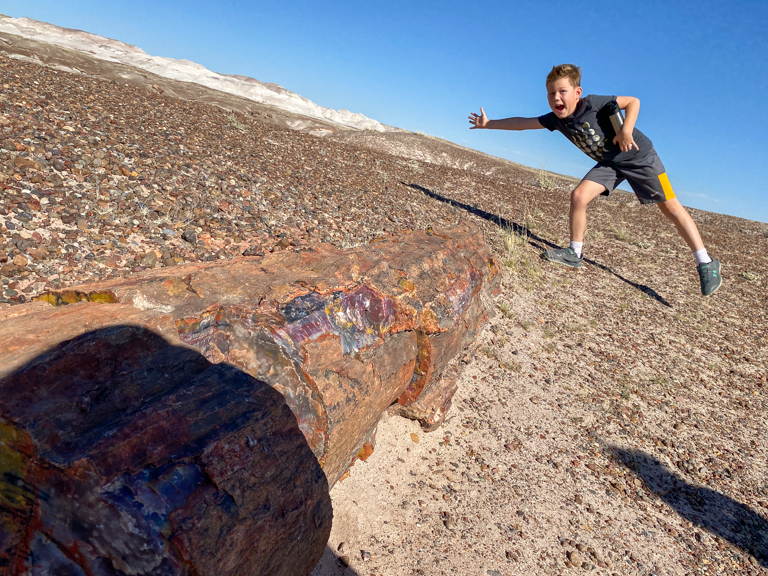 Golds for the boy, his favorite color. 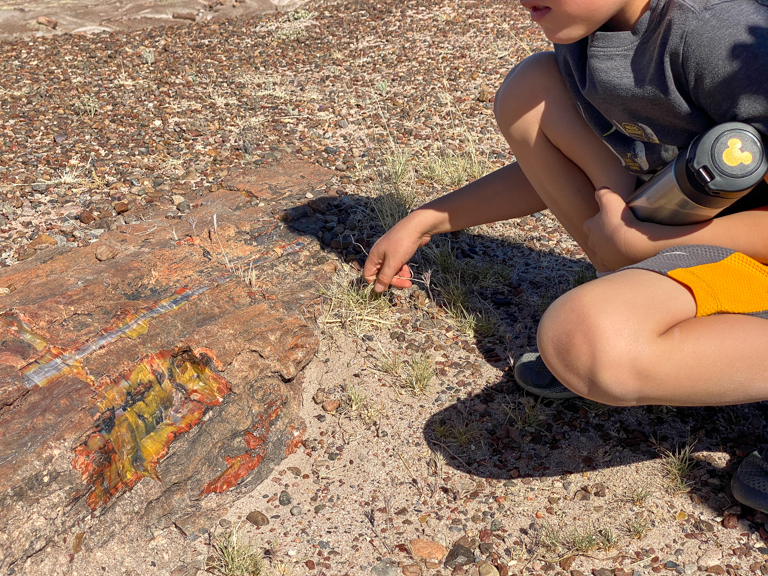 And Theresa and Alli like the rainbow of colors, especially the purples. 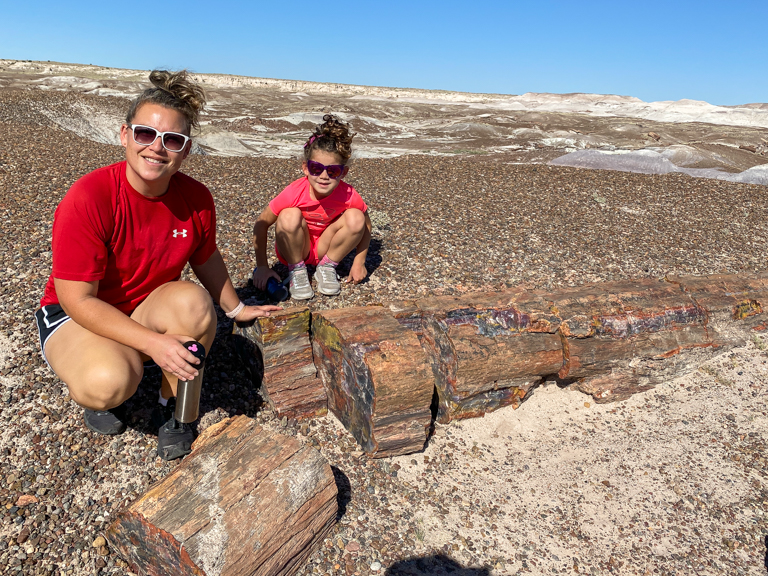 This tree used to be a monster! That bark totally looks like wood, but no, still a rock. 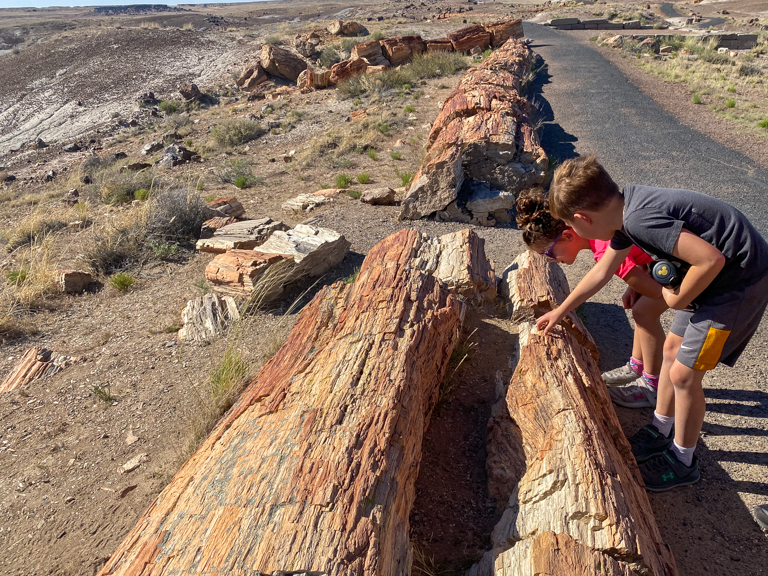 An extra colorful rock.
Ian - Everything here is crazy. Like a dream, but it's not. 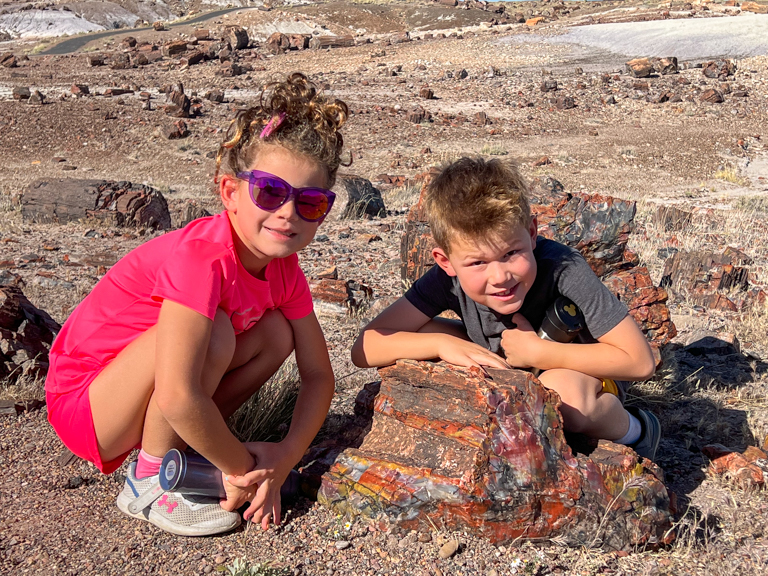 Alli - Daddy, take a picture of this one that looks like an arrowhead.
Joe - You'll have to get in the picture to show us how big it is. 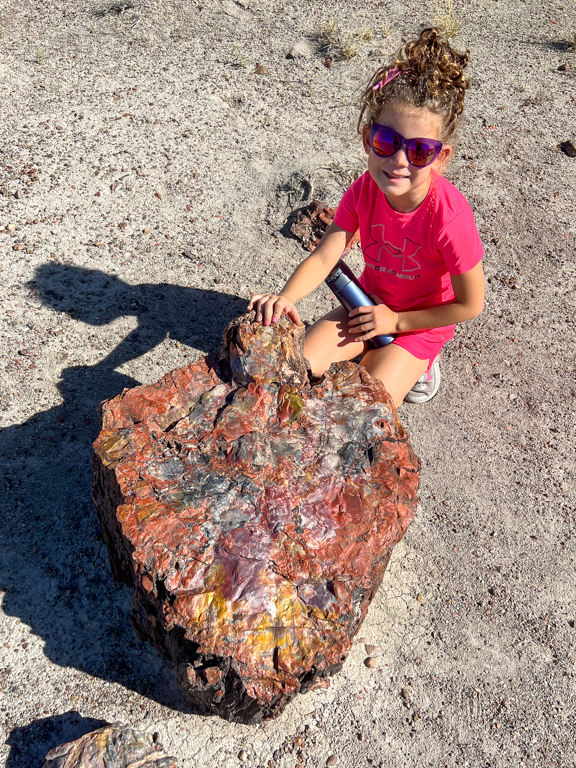 Wow. The outside kept the color of the bark. The next layer looks like what's under the bark, and then the regular tree in the middle. Just wow. And it's over 200 million years old! 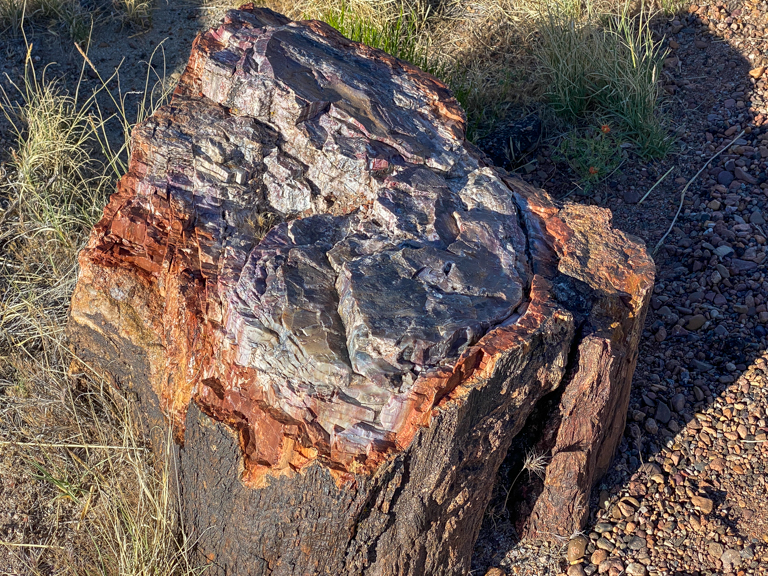 You can almost count the rings still on this slice of tree. 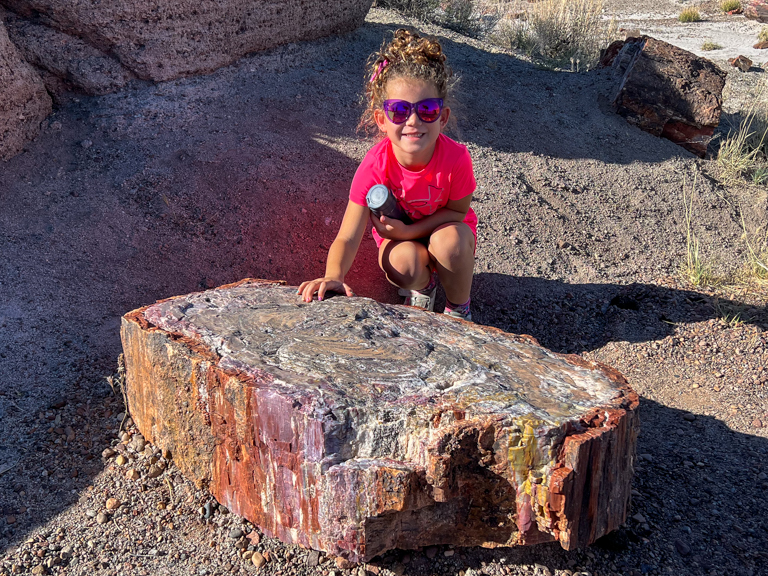 A collared lizard! That's one of the animals on the kids' Junior Ranger bingo. There weren't too many animals here in this desert landscape. 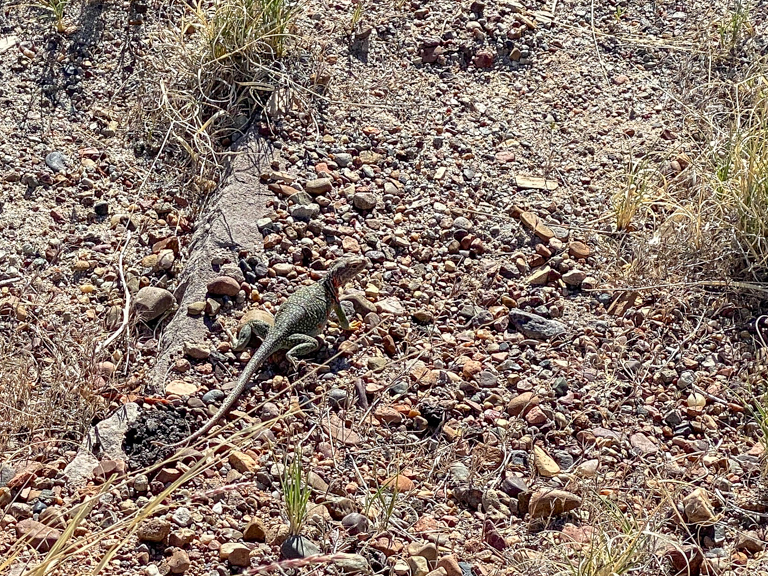 The next stop down the road is the Jasper Forest. This is a wide expanse of nothingness, dotted with petrified trees. 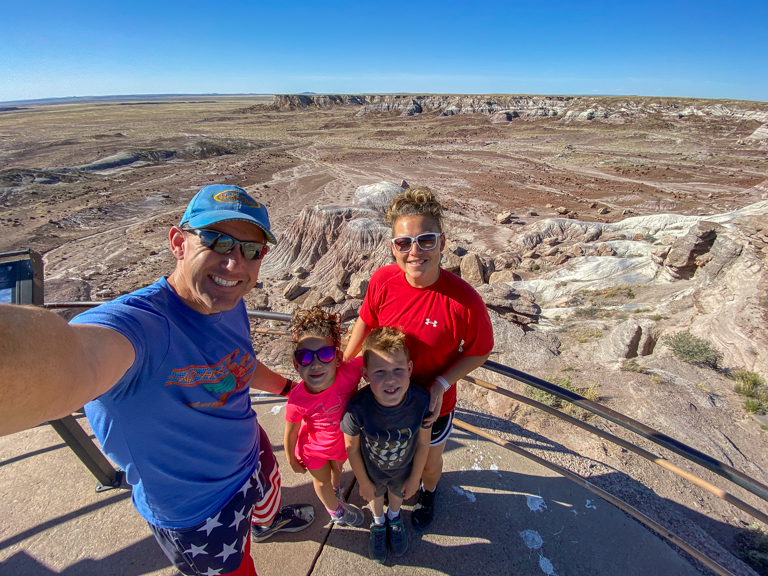 Theresa says that this park is the most unbelievable/fantastical park that we've been to so far.

Some of those trees are poking out of the hillside still. 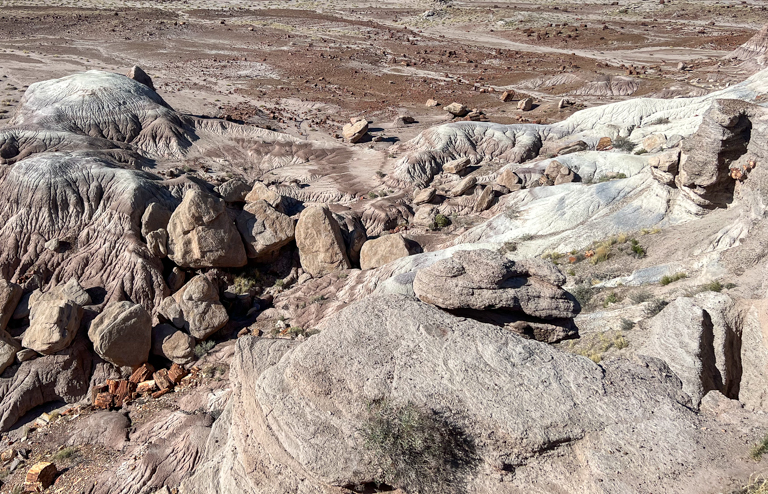 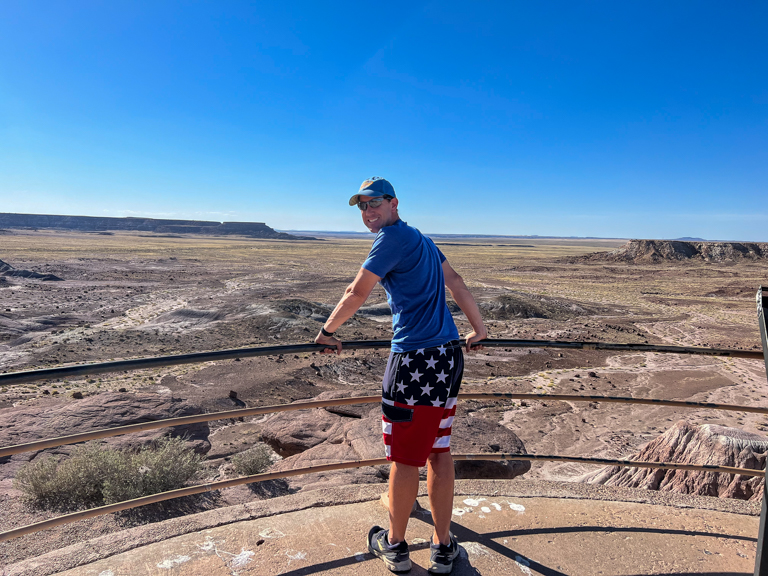 The Agate Bridge was a little underwhelming. It's a petrified tree that is across a ravine, but it's been supported by very visible concrete beams. 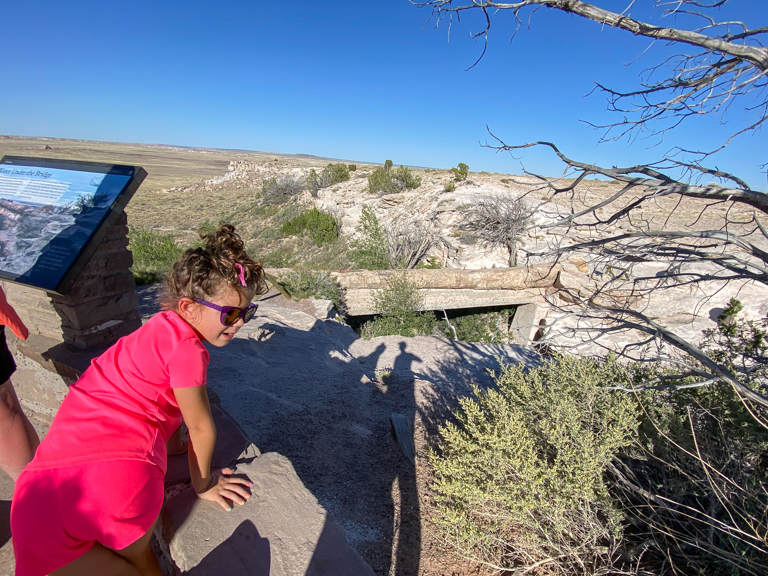 Newspaper Rock is a collection of petrogylphs by the Puebloan people who lived here 600 to 2000 years ago. 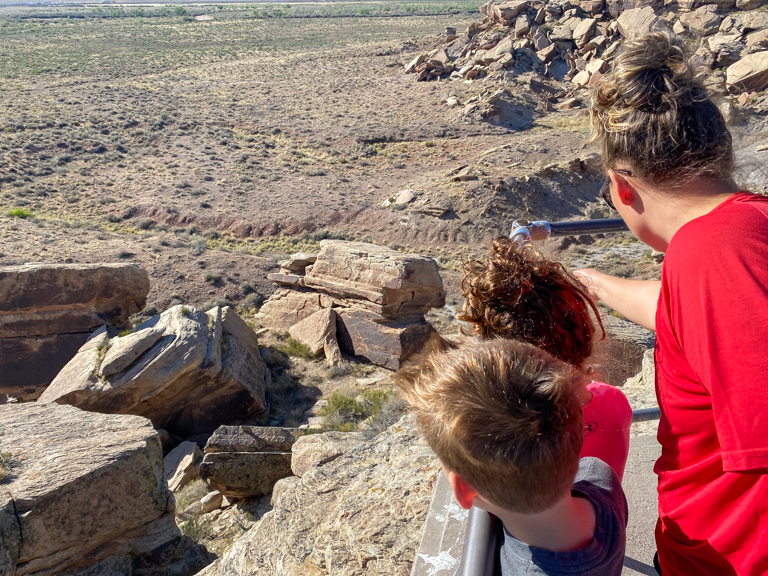 The viewing area above had free telescopes to let people get a closer view of all the detail. 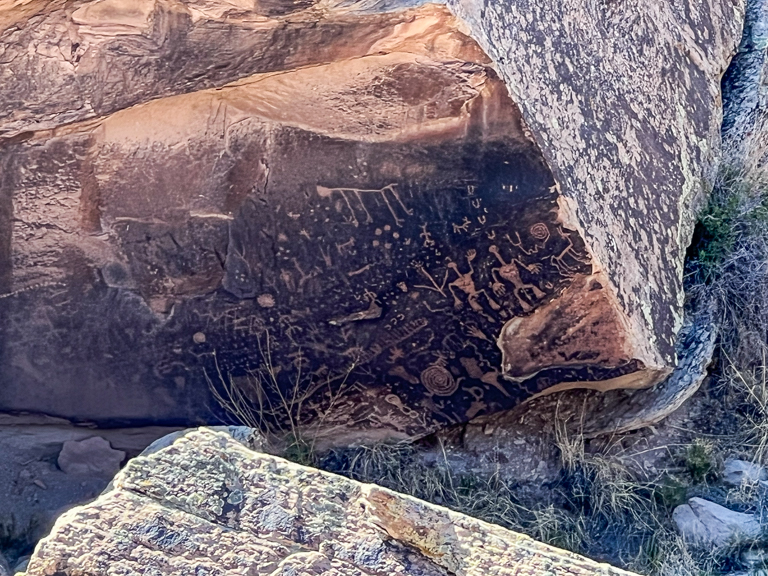 These petroglyphs were made by artists "picking off" the dark desert varnish areas of the rock and exposing the lighter rock underneath. This style of art lasts much longer than art that has been painted on. 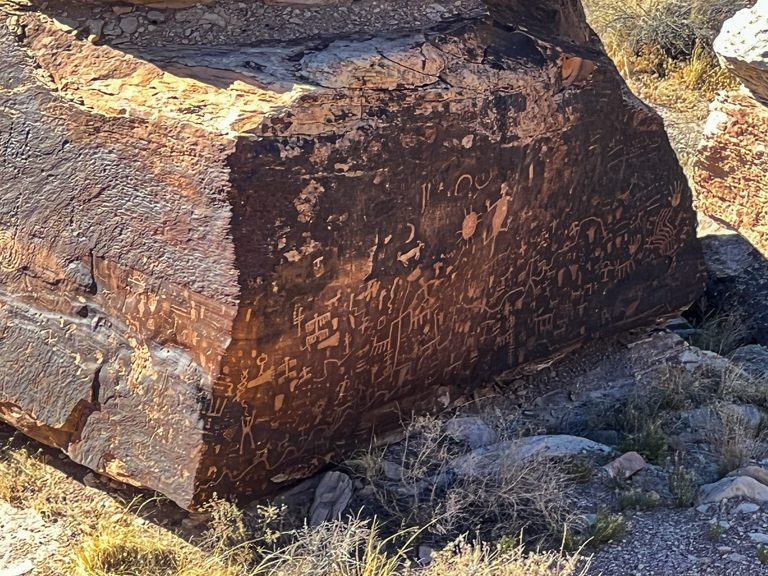 It's nearing 6pm and the visitor's centers are all closed, so we'll have to stop back by tomorrow. We've seen a lot though today! This place is a national treasure! 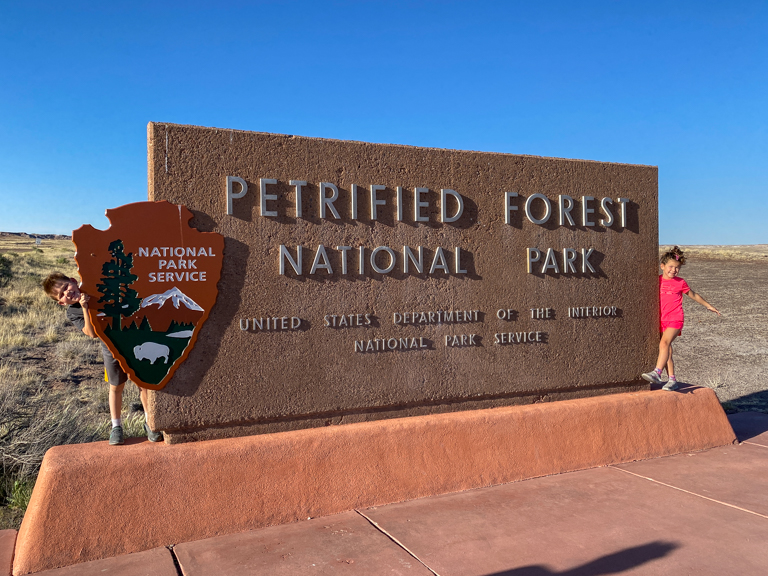