Take us out to the ballgame! We're visiting Palm Springs and there's lots of things to do! We don't have too much planned and were pretty open for pretty anything. 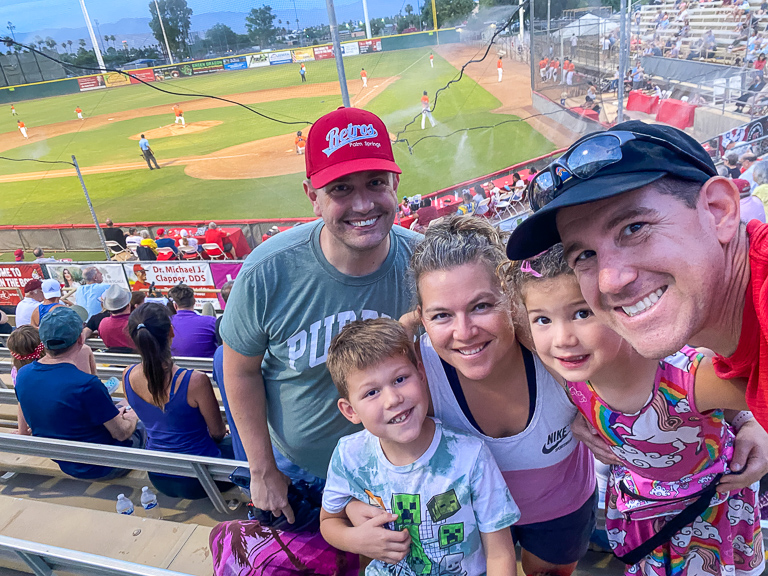 The day before, while we were visiting the Palm Springs street fair and Ian won a stack of tickets to the opening day! 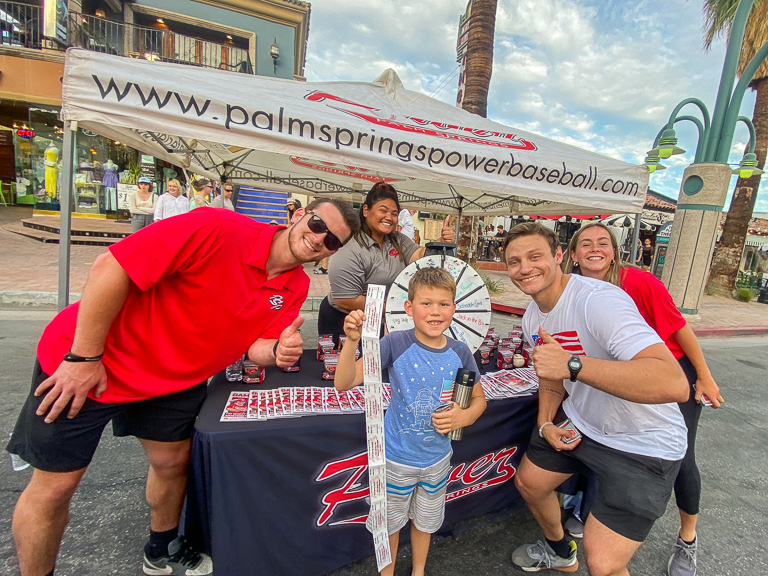 The Stadium wasn't all that far away from our RV park. There is free parking next to the stadium, but I didn't want to do that for a couple reasons. First, the Beast is a beast to maneuver around tight spots. Second, I know that foul balls sometimes leave the stadium, and I don't need any more repairs on this trip. I found street parking not far away and we walked over. 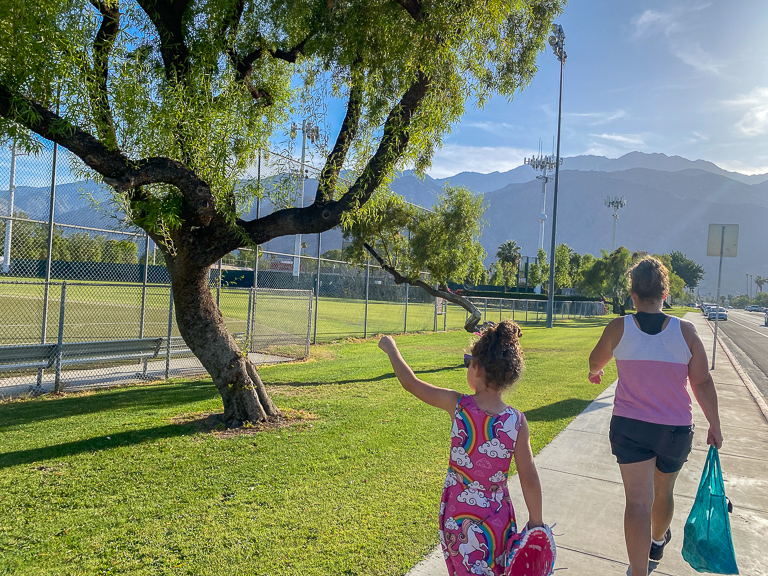 Hey! It's Noah! And he remembers us from yesterday.
Noah - You made it!
Sure did! 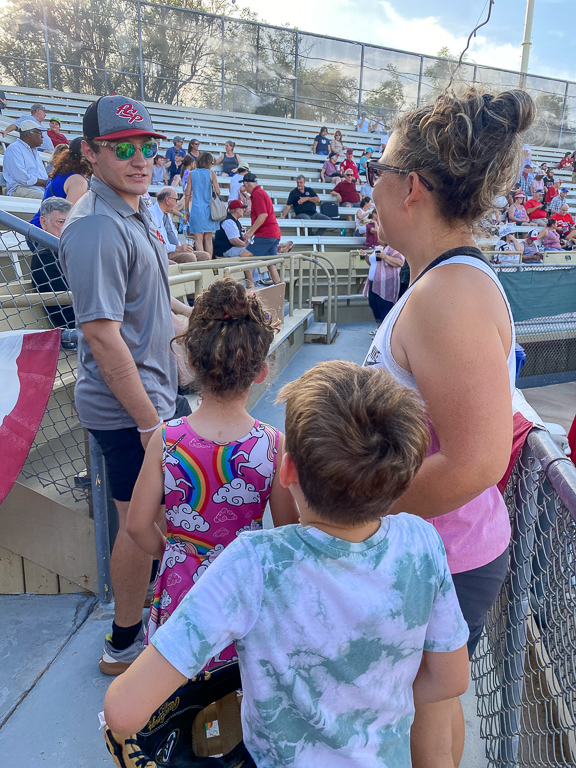 It's open seating here at the stadium. We found a place in the shade on the home team's side. We're ready with our baseball gloves just in case anything comes our way.
Thank goodness the game started at 6:30pm when the sun is starting to go down and the temperatures are starting to reduce just a little. 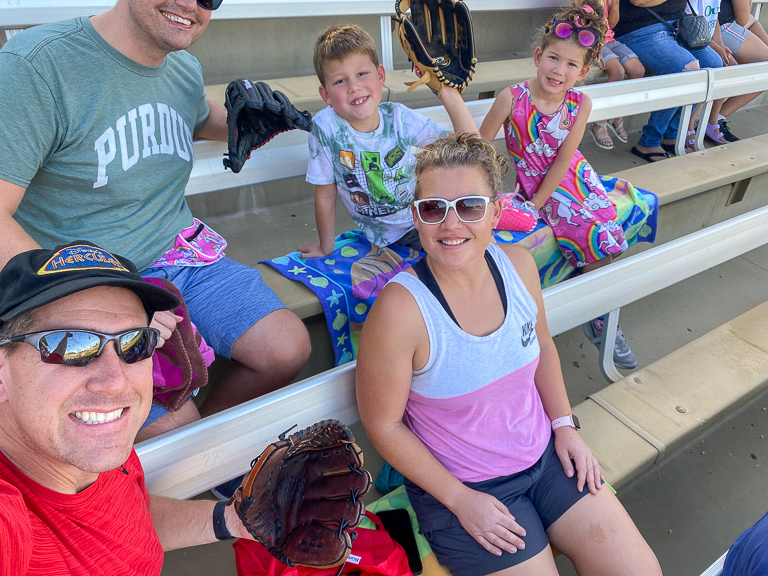 Before the game begins, the kids were looking for a treat. There's burgers, pretzels, and the like, but with the heat, they wanted something cold. How about a snowcone! 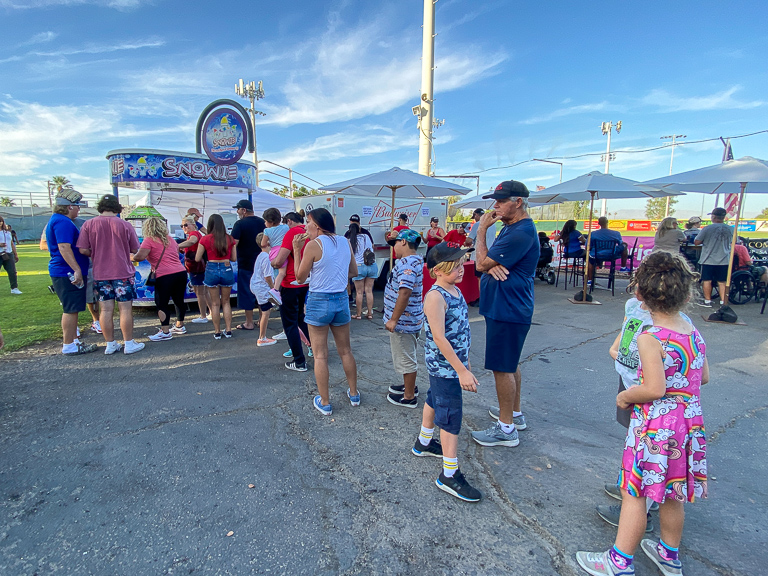 And they've got a flavor station where you can add your own syrup! As much as you want! 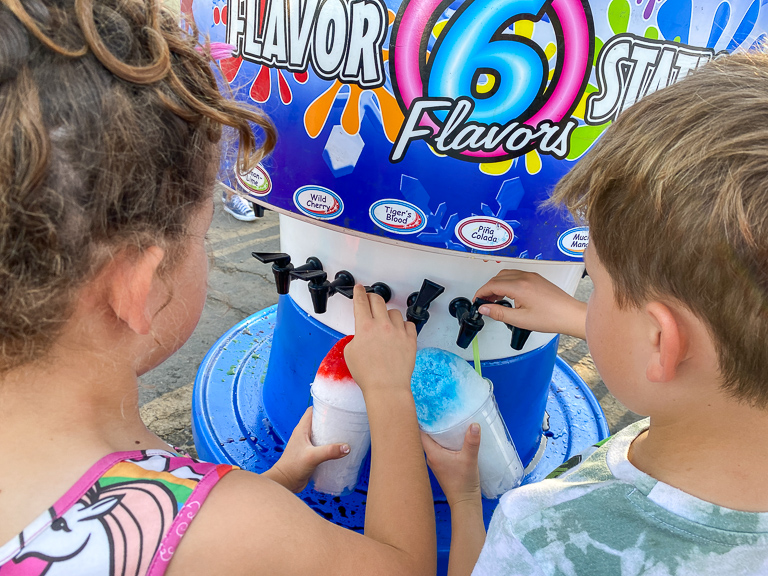 Score! That was a big draw! 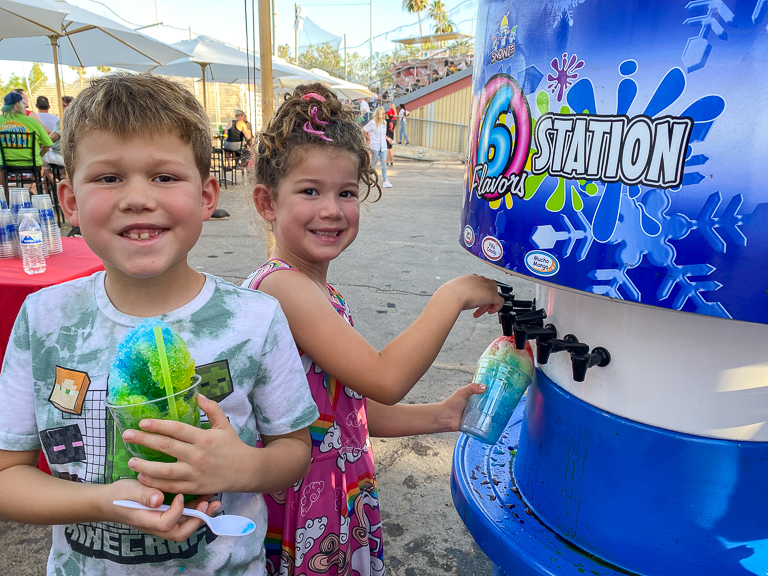 At 6:30pm, it was time to sing the Star Spangled Banner. 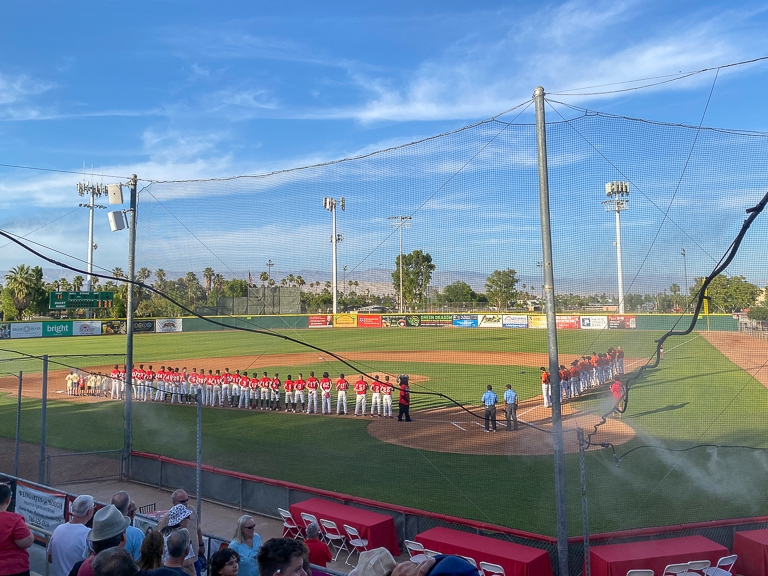 We're always thankful for our military and other service members. 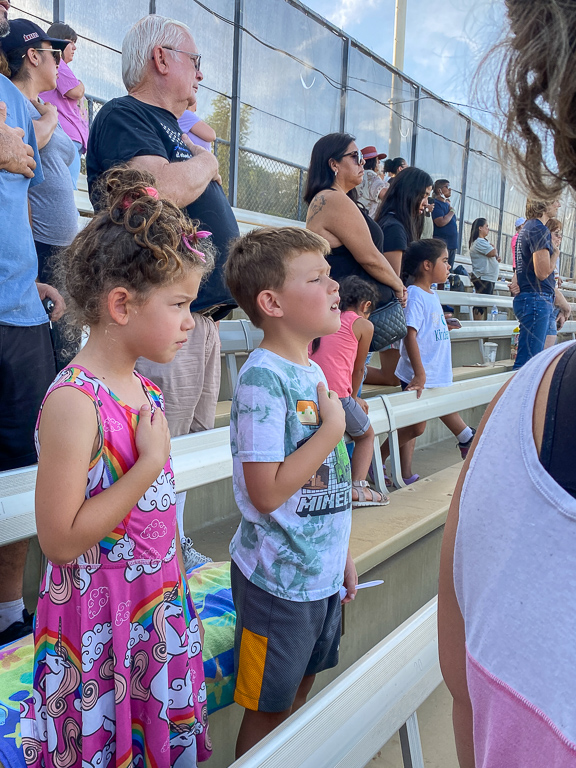 Jacob has an interesting bit of clothing tonight that Alli has noticed, but hasn't really said anything about. He found this a few weeks ago and sent Theresa and I a text about it. We made sure she wore her unicorn dress tonight. 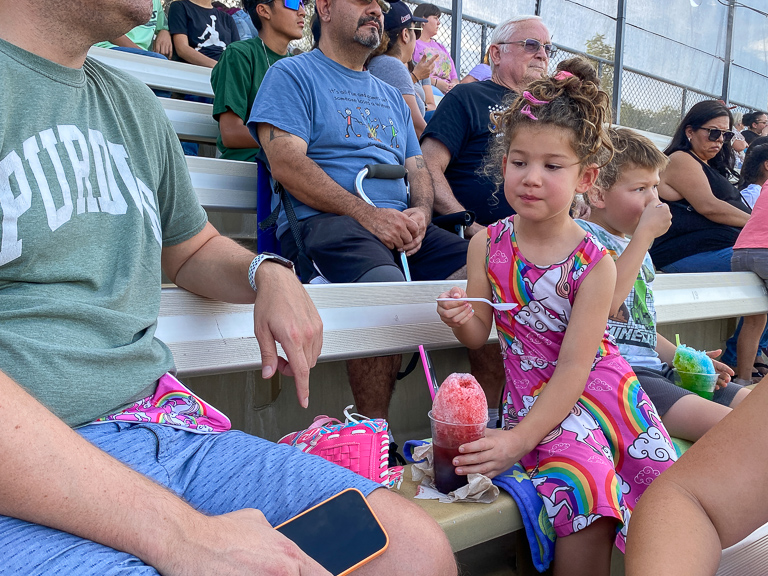 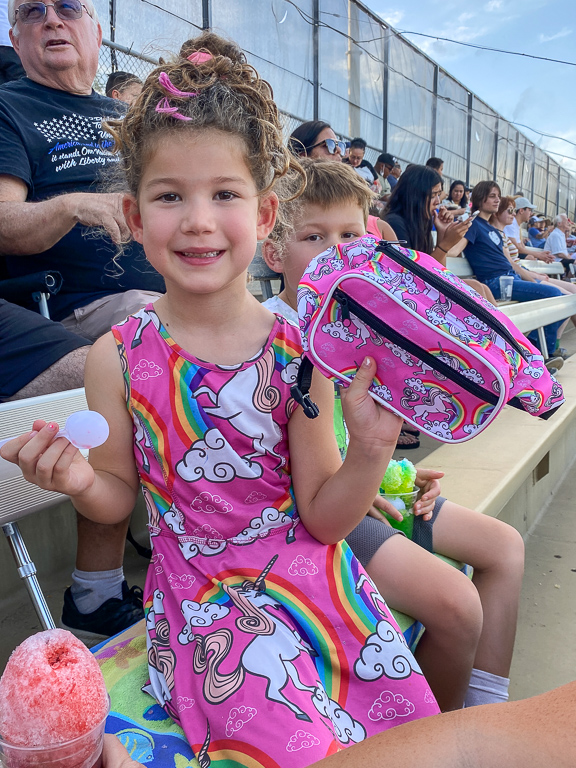 It's warm, but still pleasant this evening. Plus the stadium has a water misters all over to keep you cool. Some places got a little bit more wet than others. 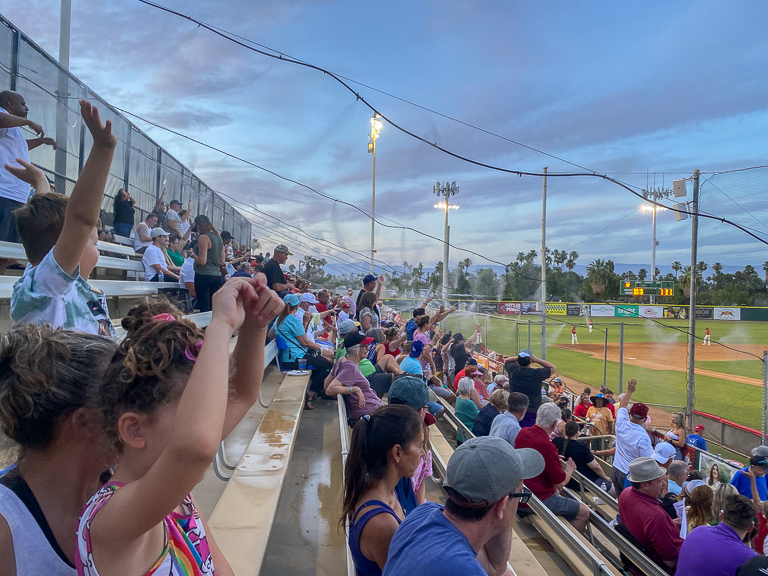 It was an interesting start. One of the first batters in the Power's order swung a little too hard and threw his bat all the way from the plate back into the dugout! Hope everyone is paying attention!
We also had a foul ball come over our heads, bounce off the fence on the top of the stands, and roll near this lady. She generously offered the ball to Alli. 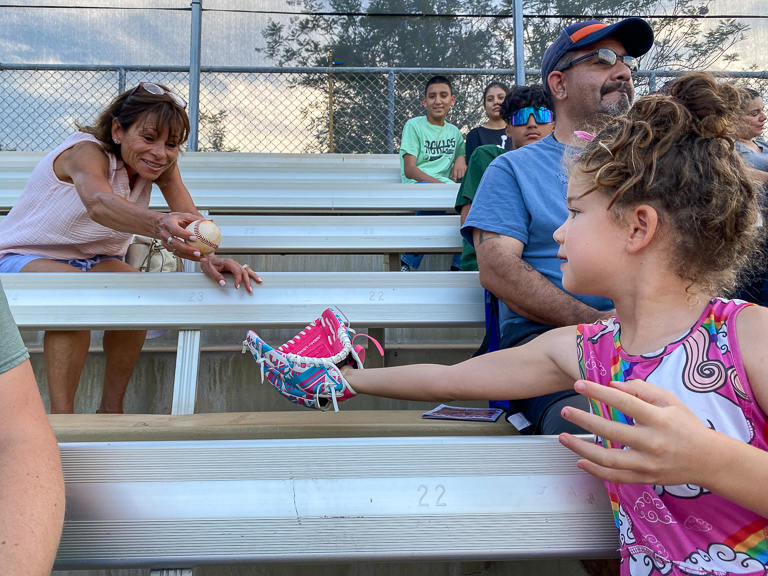 Awesome! Congratulations Alli!
Regularly the announcer would tell the stadium that "Foul balls can be traded for an Ice Cream Bar at the snack stand." The kids were having none of that. They wanted to keep this ball. 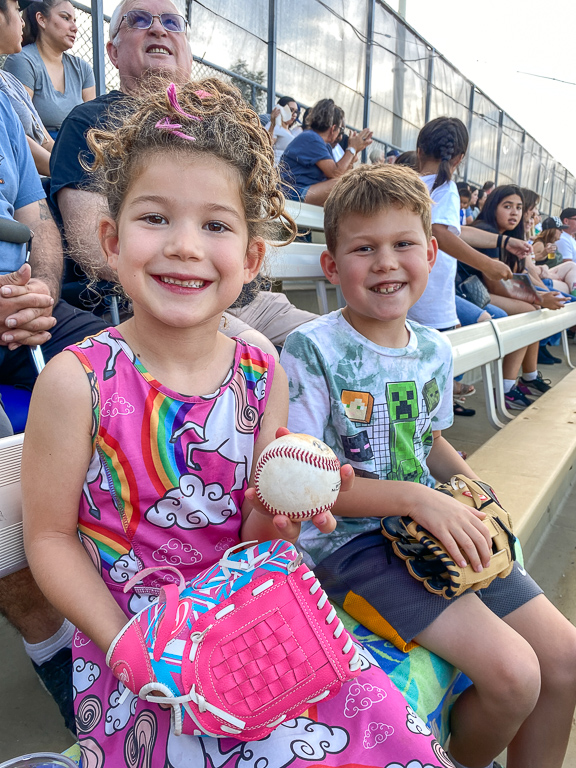 Theresa just wanted to get a good picture with Alli. Who are those jokers photobombing them. Eventually she got one. 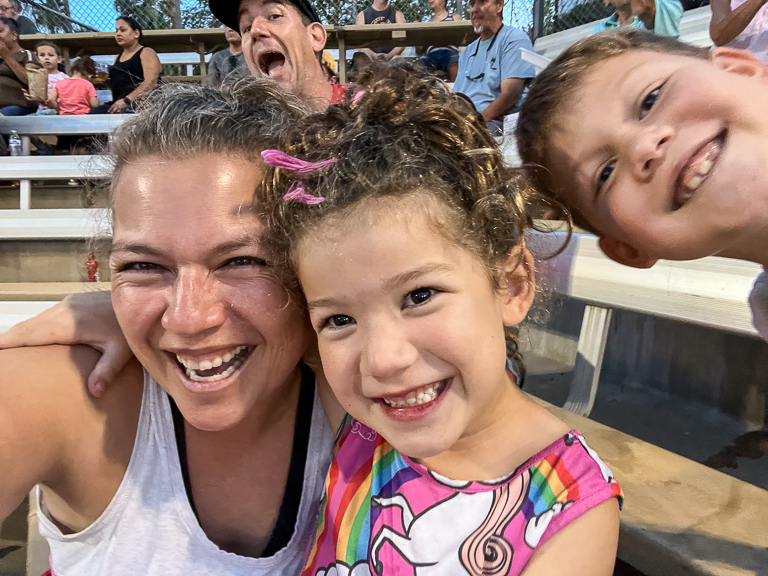 Right behind home plate there were tables set up for a VIP section. Once it reached the 5th inning, an announcement was made that it was all open seating going forward. Ian and I went down and snagged a seat right behind the plate. 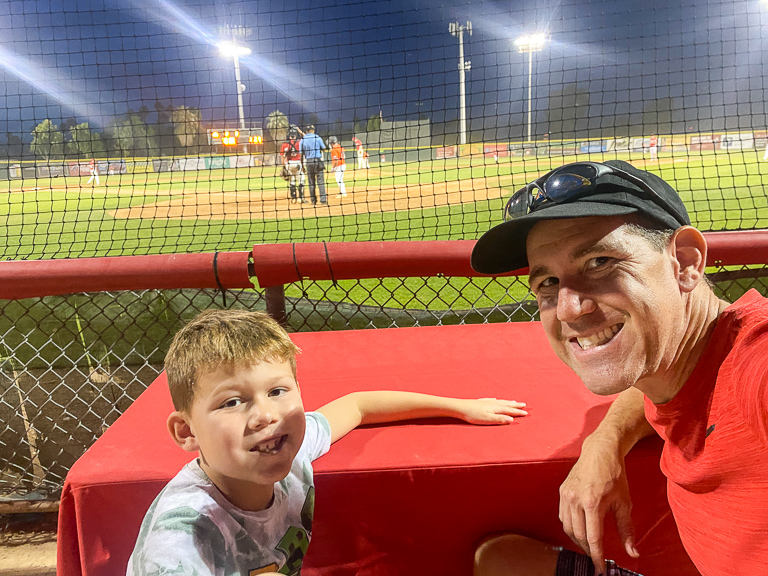 You don't get a good view of the field, but you do get a sense of the speed of everything. Foul balls and wild pitches banged against the wood and wow, was it fast. 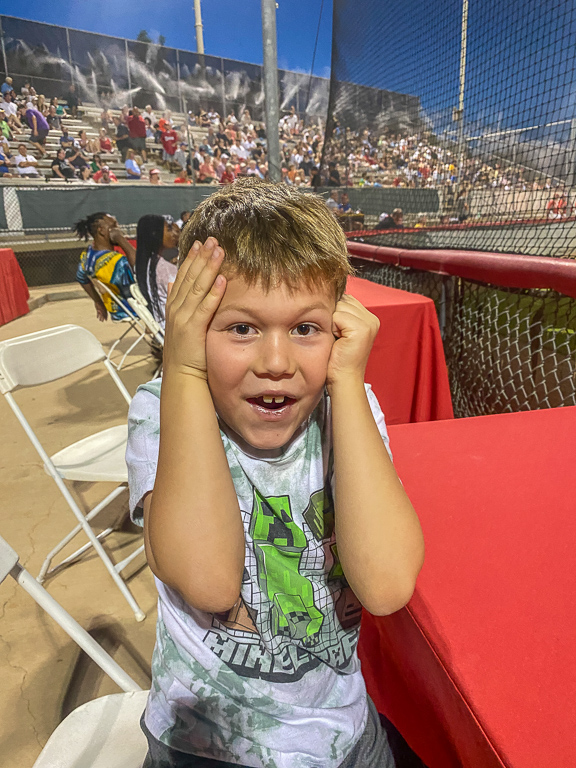 Theresa and Alli joined us a short time later. It was fun seeing the game close up. 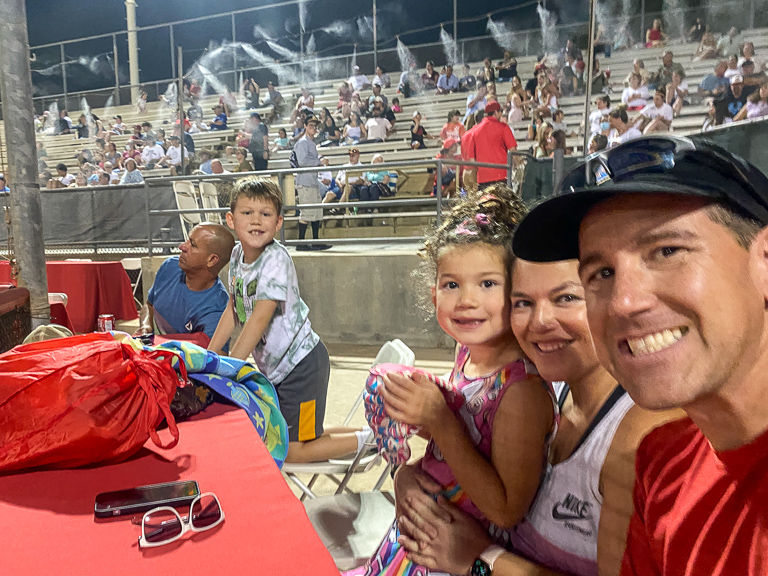 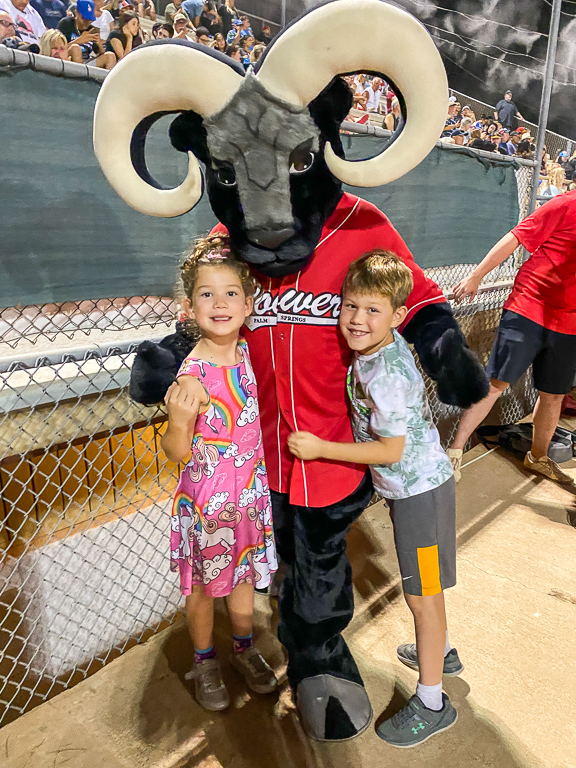 An announcement was made that all kids were invited to help sing during the seventh inning stretch. Ian and Alli headed over with all the other children. Eh, they are a little close to that net though... I had them stay a few feet away. A foul ball into that net at head height could be bad news. There were even kids lifting the net up, and I did have to say something at that point. 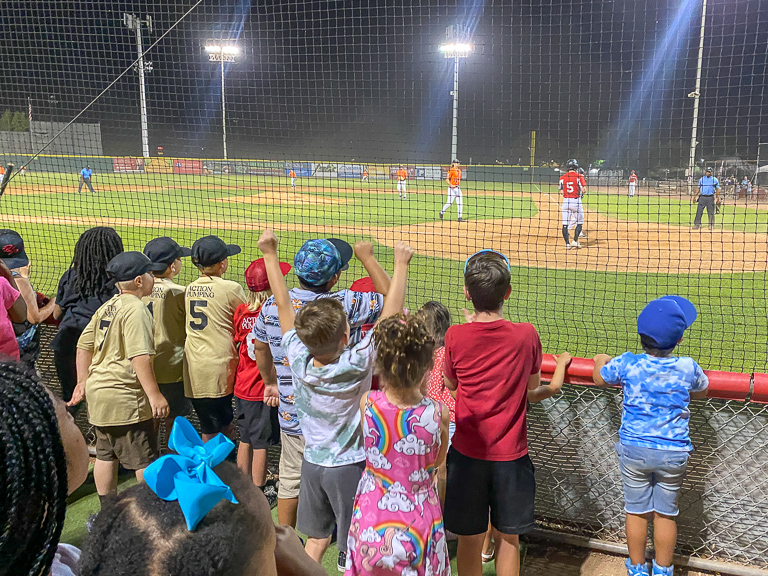 During the seventh inning stretch, a whole chorus of kids singing "Take Me Out To The Ballgame".
All the kids who participated got a coupon booklet for one of the sponsors of the Power, Jack in the Box! 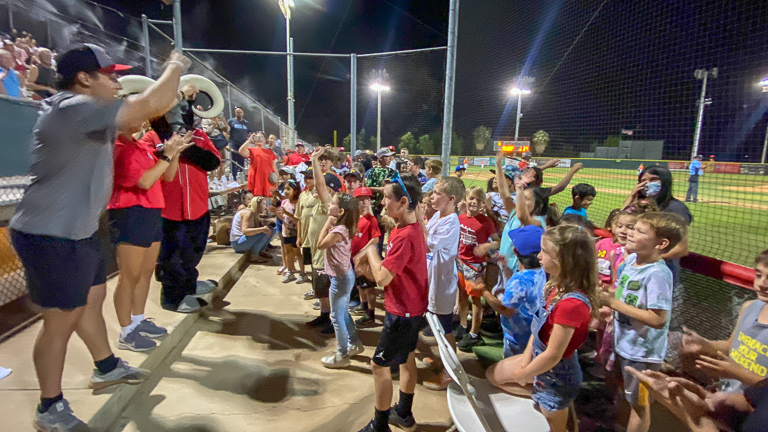 But wait! There's more! They've got a whole army of kids here. Let's put them to work!
Each kid who wanted one was given a small grocery bag. "Fill this up with trash and we'll give you a coupon for a free burger!"
Oh boy. The stadium was suddenly swarming with kids picking up used food trays, beer cups, wrappers, etc, and even asking people for their trash (no gloves or anything else mind you).
My kids were towards the back of the pack receiving their trash bags, so by the time they started scouring the stadium there wasn't a whole lot left. I went with them and checked. 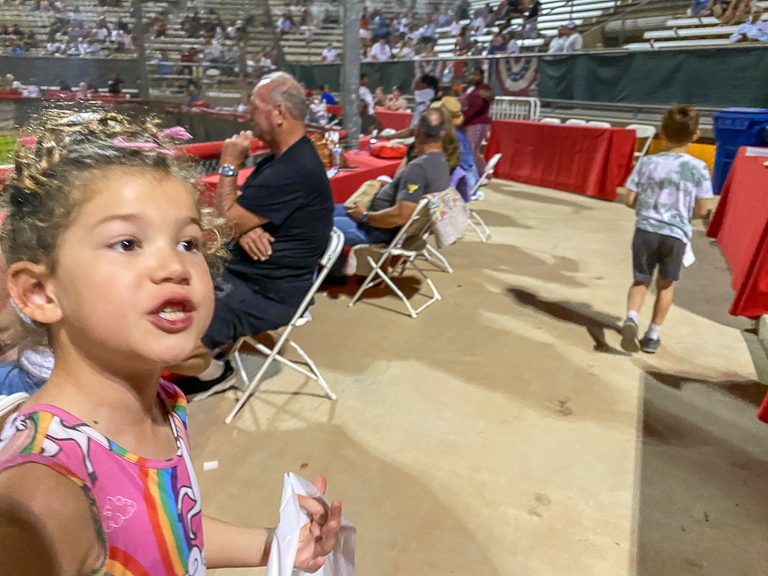 Alli - Daddy, can you drink some water bottles so I can have some trash?
Ian helped out too. 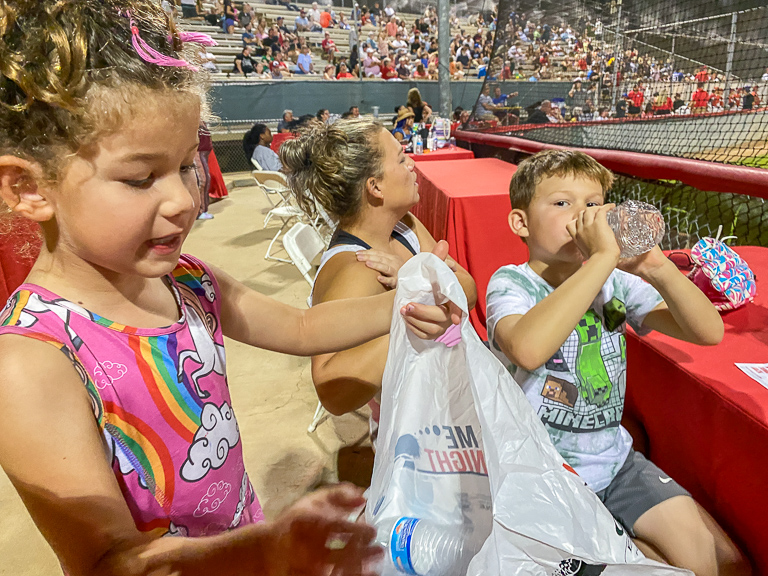 Here's a look at what their army of janitors were able to pick up from the whole stadium. 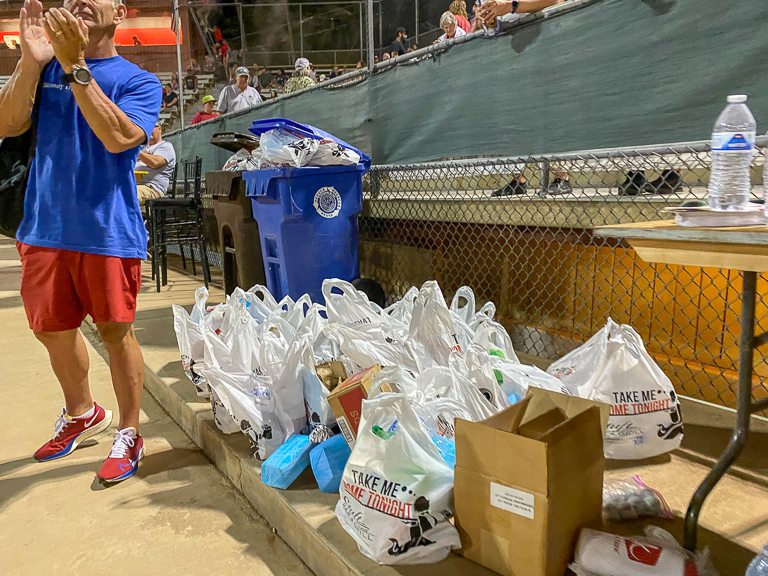 Alli and Ian brought their bags of "trash" over to get their coupon and found their buddy Noah again. He asked if they wanted even more prizes, and of course they did! A Jack in the Box prize pack, including a beach ball, squirt bottle, and a plate (that's a frisbee Alli). 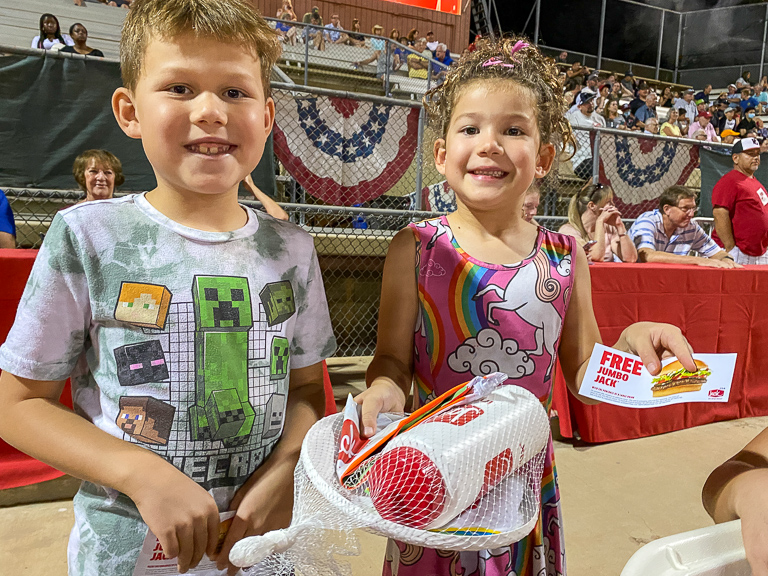 It was a very exciting game to watch, especially in the fifth and sixth inning. Lots of wild pitches and lots of runs! And in the end, the Palm Springs Power won! Congratulations! 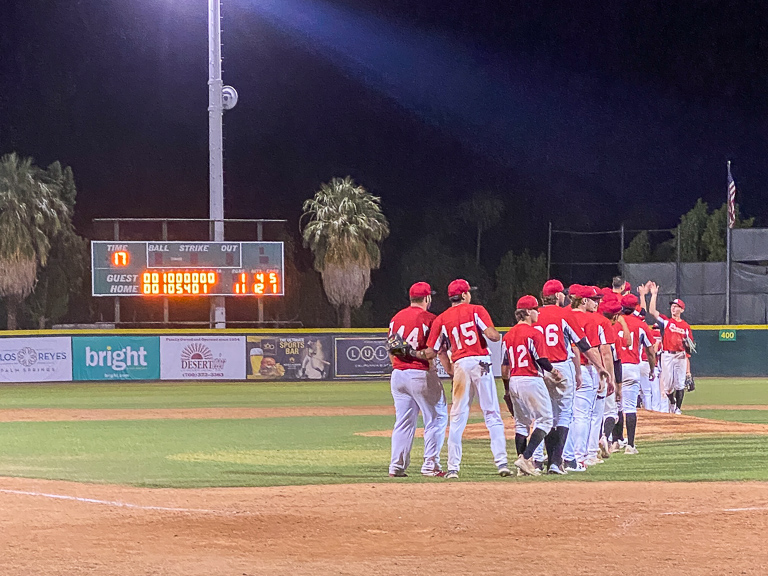 And because it was the opening day, after the game there was a pretty decent fireworks show too!
Ian, thank you for winning us tickets to the baseball game! 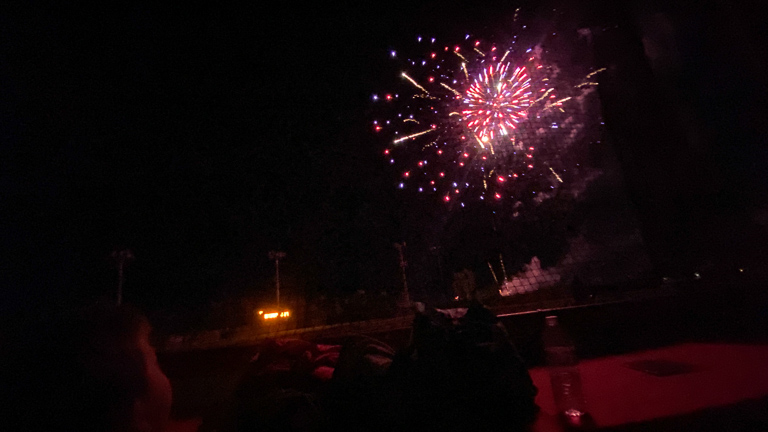