Our first couple days and getting into Palm Springs was a little difficult, but can it get better? Yes it can! Why? Because Palm Springs is home to our very good friend Jacob! And we're lucky enough that even though he's a big traveler himself that he's home for the whole week that we're here! Let's go out to dinner together! There's a Peruvian place in Palm Springs that we all wanted to try, hoping it would be like the place we all loved back in the South Bay called El Pollo Inka. 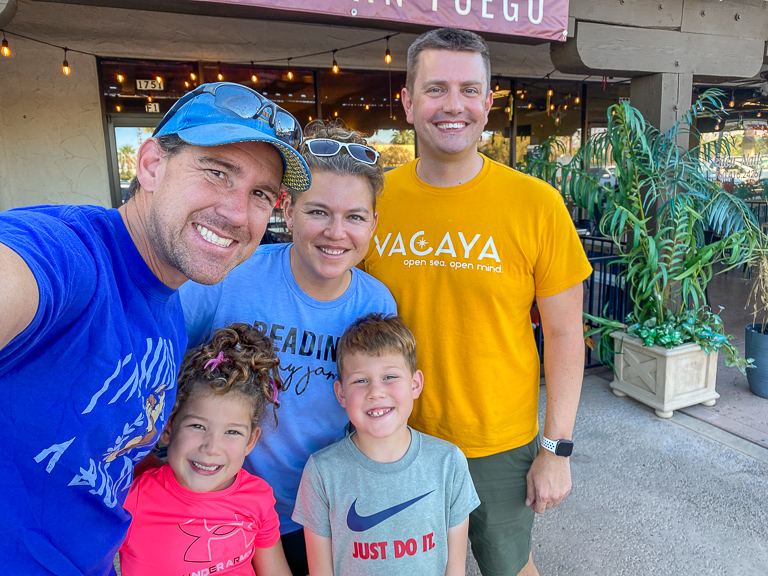 We placed our order at the counter and grabbed some water.
Alli - This water tastes like popsicle sticks.
Haha, it really does Alli. 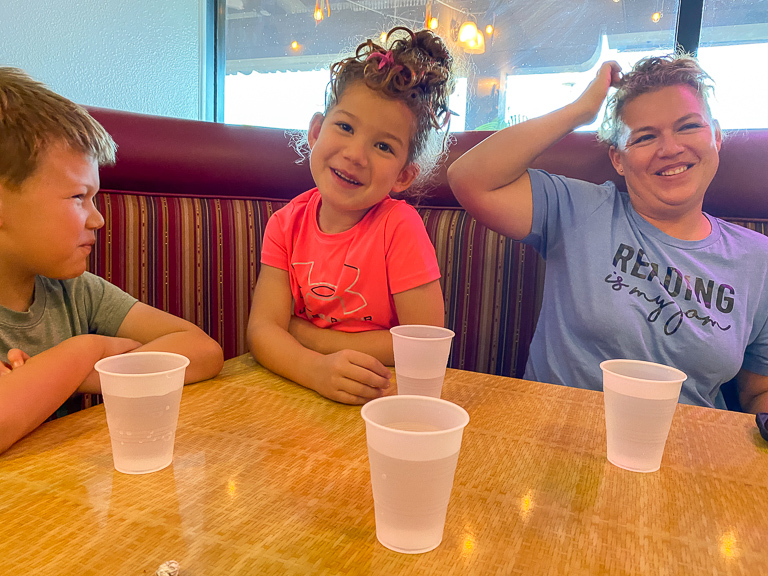 Our dinner was tasty, but not quite up to the level of El Pollo Inka. 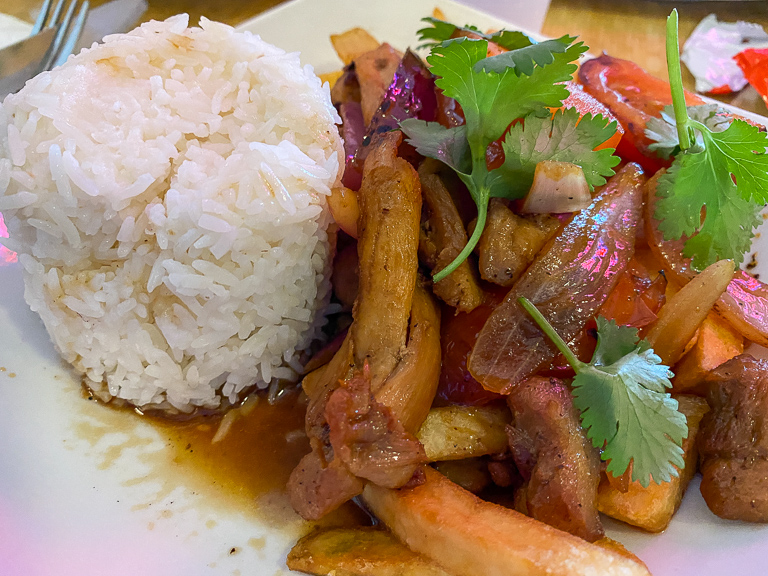 Afterwards Jacob came back to the RV but with a surprise. His Rice Krispy Treats! We love them! 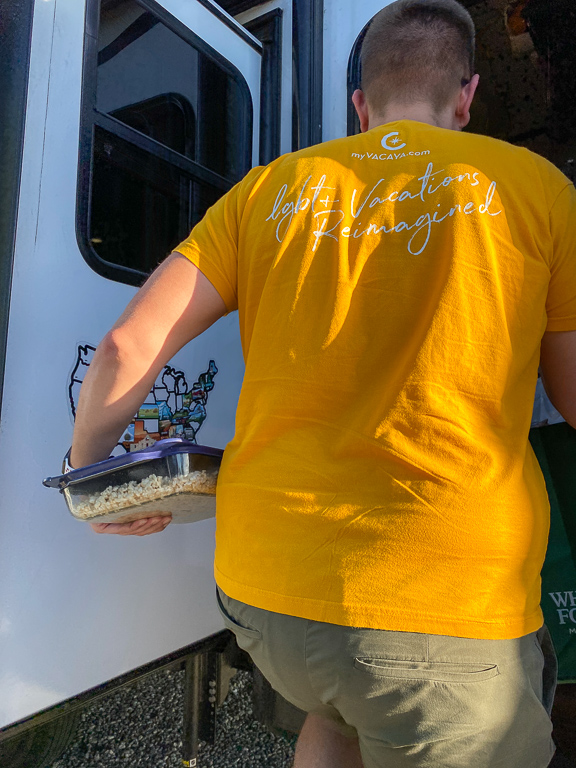 We spent the rest of the night playing table games together. Like Racko! This is not a good starting hand. 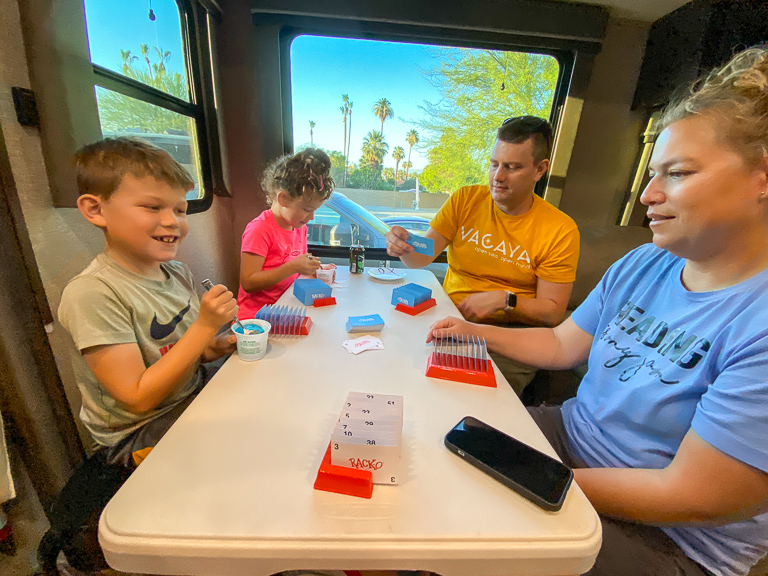 And we love having lots of games because after a couple rounds, we can swap out to a new one and keep things interesting. Like moving on to Phase 10! 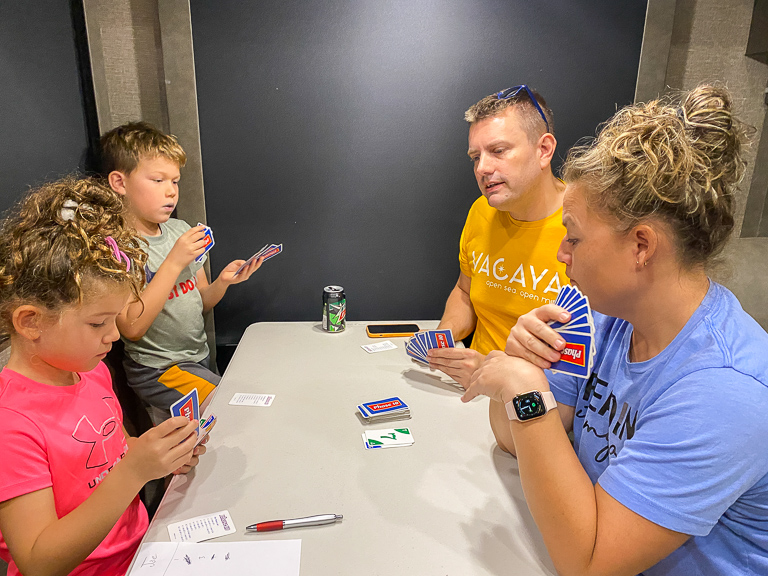 Yahtzee late at night is a little more difficult. 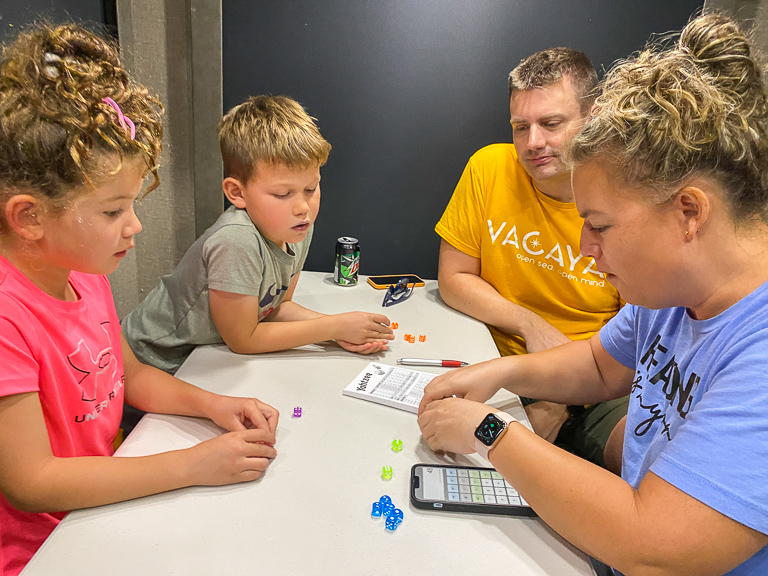 Congratulations to our big winner Ian! Both he and Alli rolled a Yahtzee, but he did really well on the upper section, getting that bonus, and coming away with 308 points. 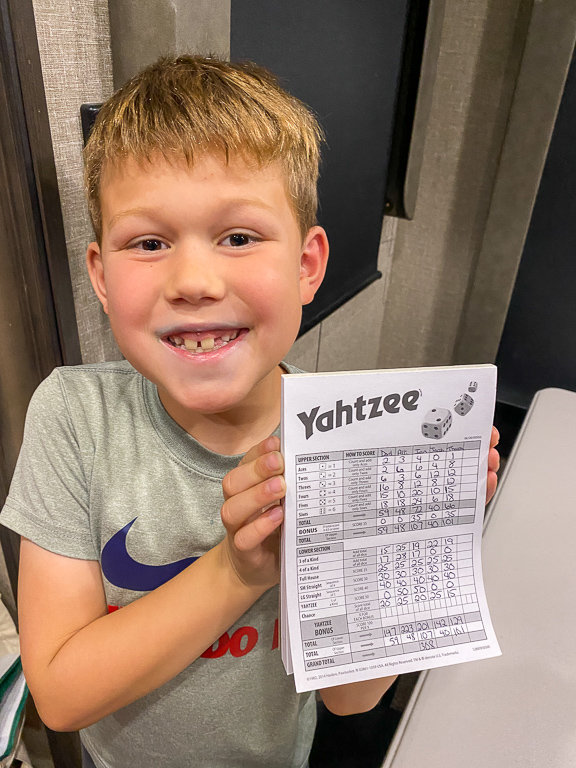 Back when Jacob lived in Long Beach, we would often go to the Belmont Shore Stroll and Savor. In Palm Springs they have a weekly street fair with lots of different vendors that we all wanted to go check out together. 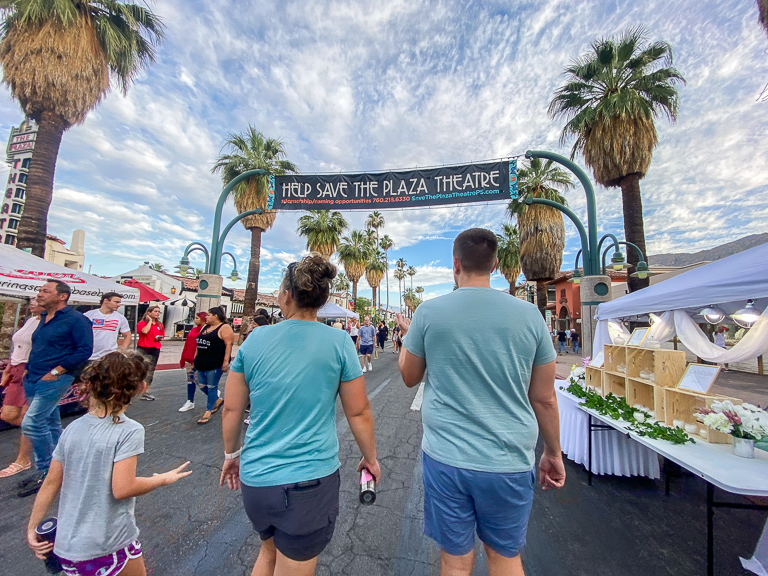 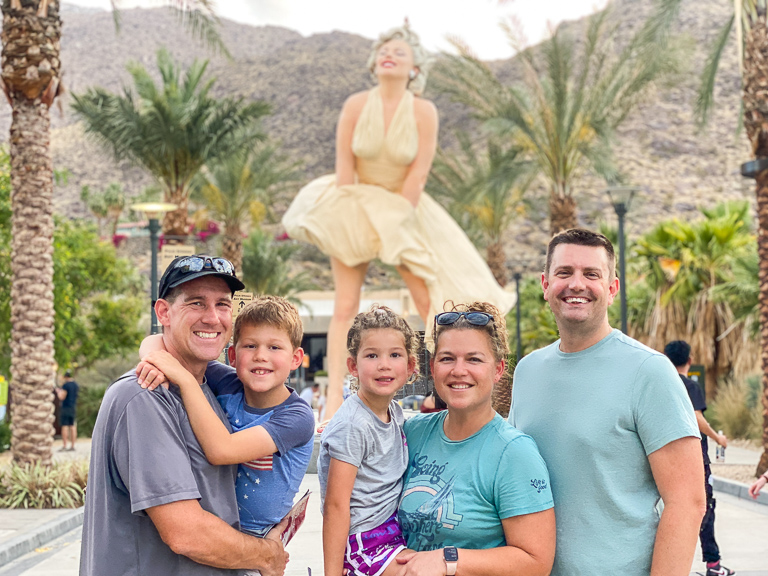 Ian - What's a Rabbee?
That's a good question for him Ian! He was keeping busy though with others, so we didn't stop. 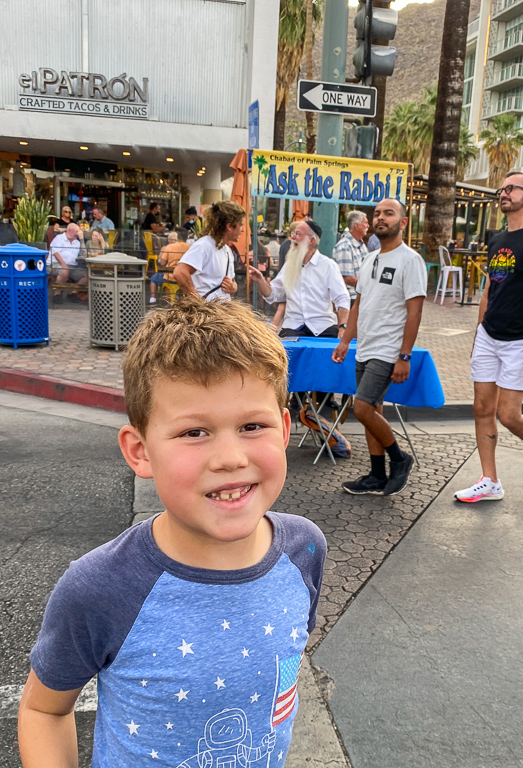 Jacob picked up a some cookies from a favorite bakery of his for us to enjoy later. 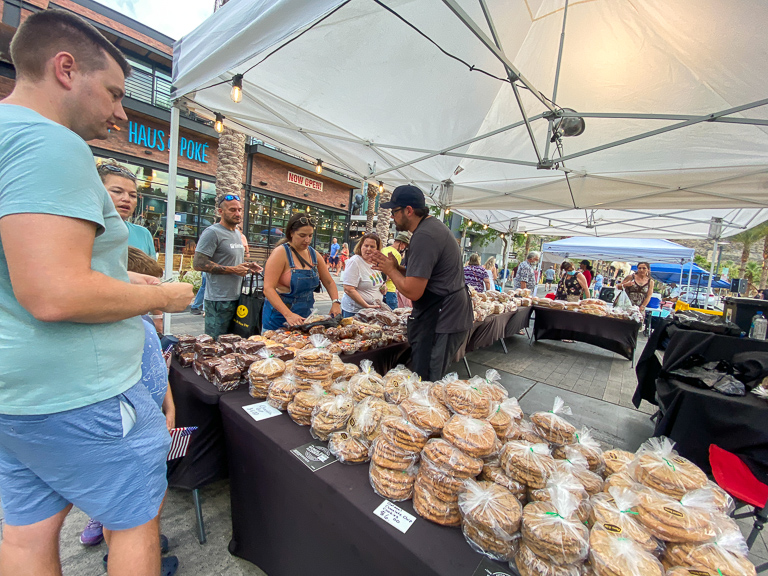 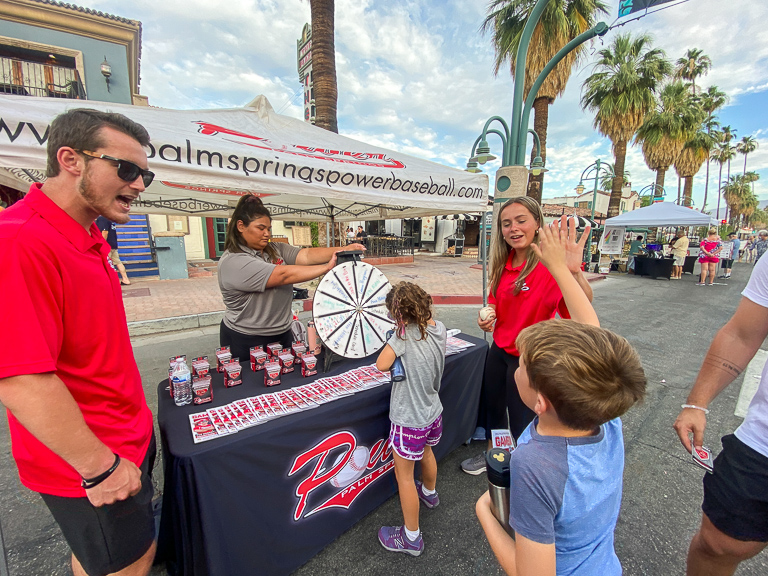 Every person got 1 spin, usually winning a game program or a schedule card. Ian was super excited to play though, so they decided to apply a 3 strikes rule. Three separate spins to try to win the big prize!
Like I said, Ian was really excited and that excitement is contagious, drawing a bigger crowd. On his third spin, a gust of wind (or maybe it was Marketing Director Noah giving it a nudge) pushed the wheel over to the grand prize. A free ticket to the game!
And if one free ticket wasn't exciting enough, Noah asked if he wanted to just go by himself, or if he wanted his family to come with him too. Of course Ian wanted everyone to come, so they ripped off a stack of tickets and handed it over to him. Great job Ian! Now I know what we're doing tomorrow! 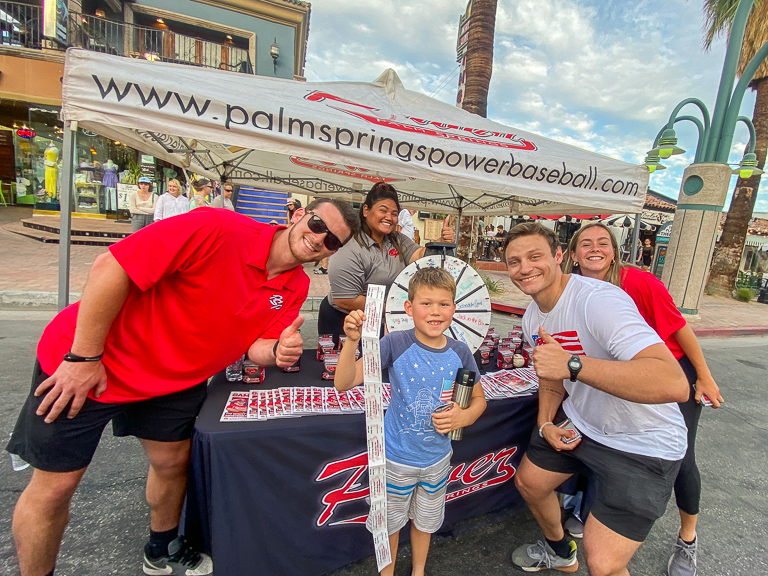 It wasn't quite the same at the Belmont Shore Stroll and Savor with a lot less food options, but it was fun. 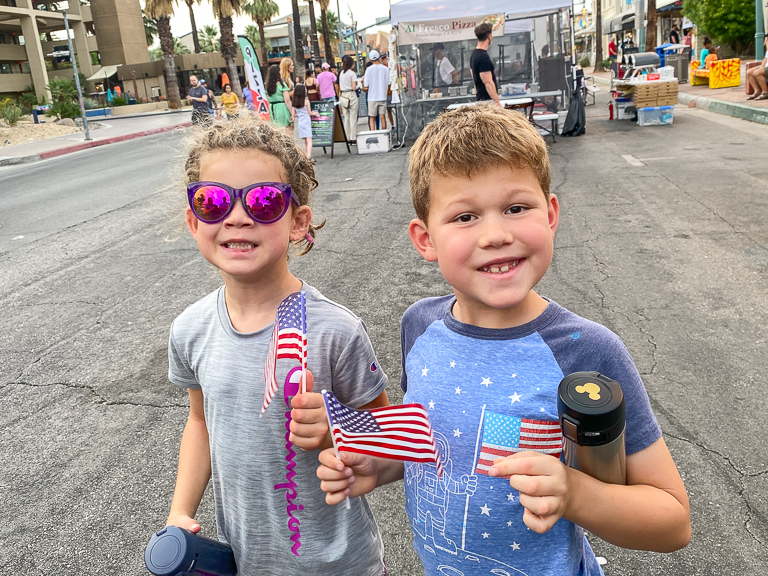 Afterwards we all headed back to Jacob's place for more games. I've told Ian about making your own soda at home, and we were really interested to see Jacob's soda stream. Add syrup to cold water, then inject CO2 into that bottle to make it fizzy! We could make so many different soda syrups with our own flavors! 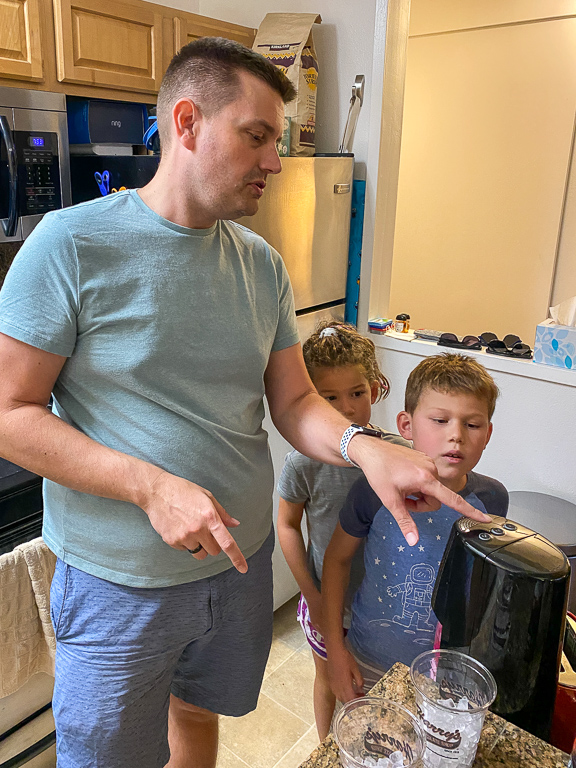 The kids know all about Uno and a few of its variations, but Jacob introduced us to a new version. Dos!
After reading through a confusing set of rules, we eventually figured it out. It's a pretty fun game that actually moves pretty fast, and having to yell DOS instead of UNO is a different mindset. 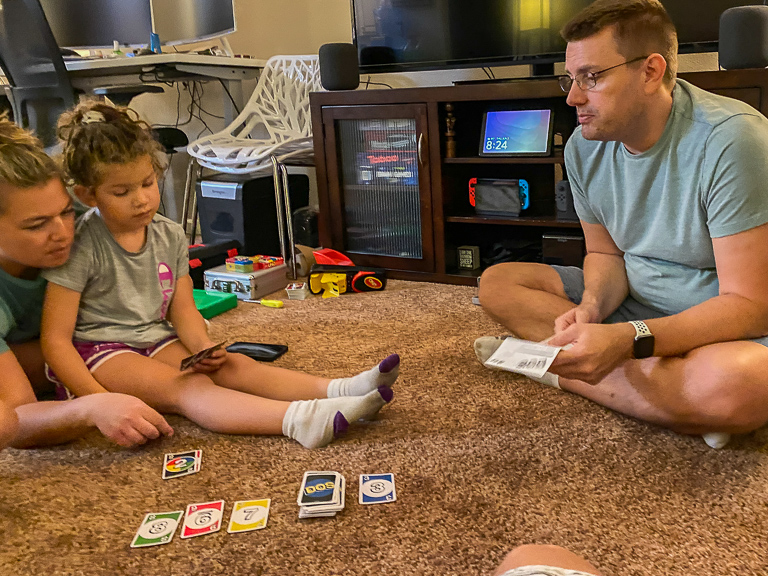 Back at the RV park, do you want to go swimming? No, it feels like a hot tub! 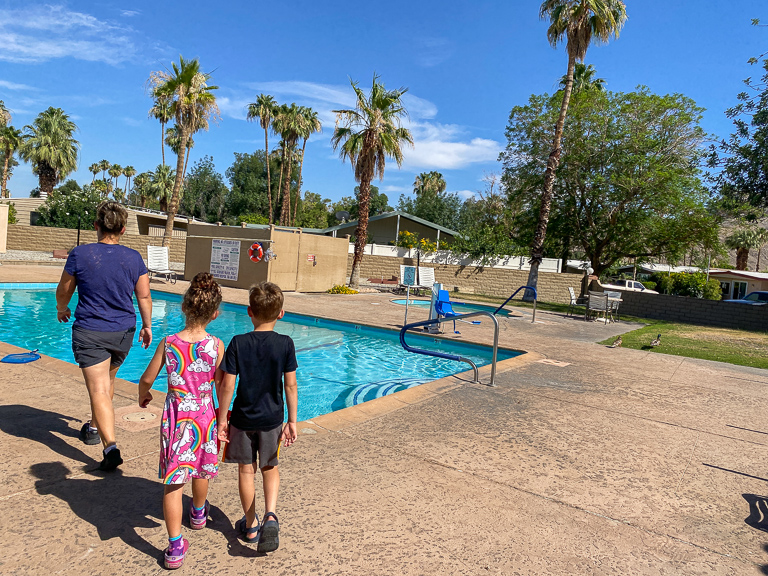 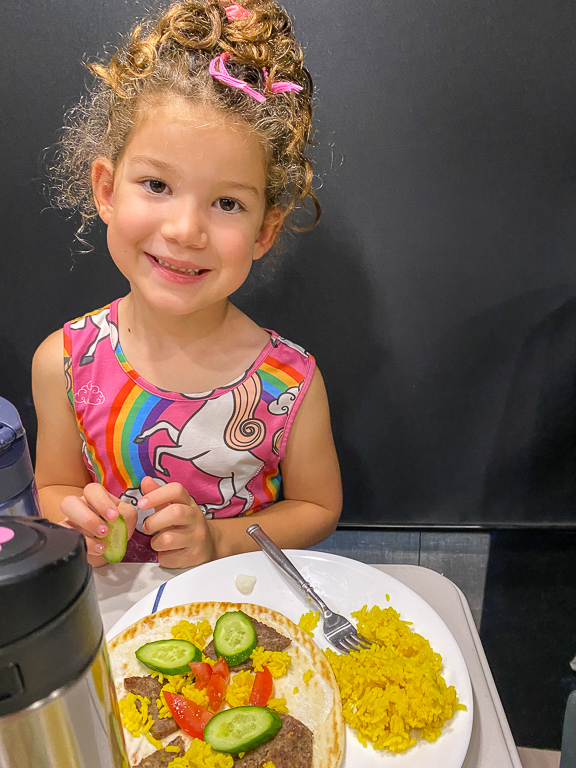 For our week here, I think we got to see Jacob every single day, which we loved!
We ended up doing lots of things together, and hanging out in the evenings playing games. 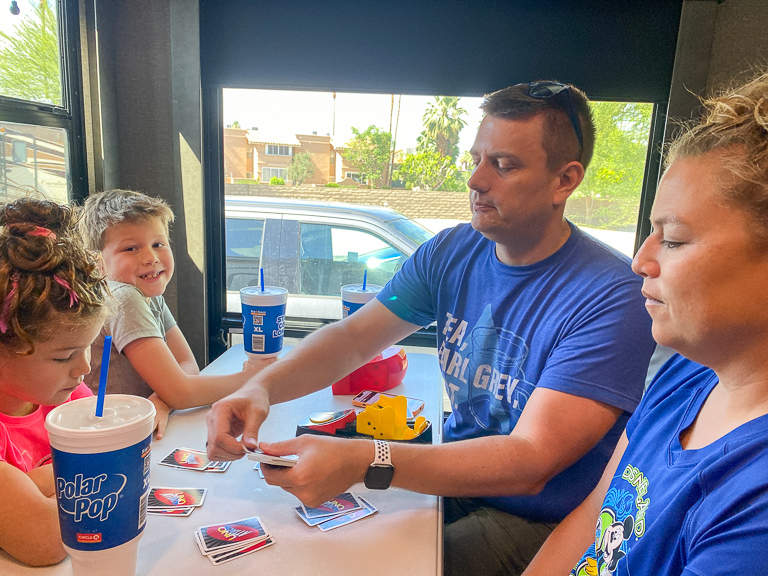 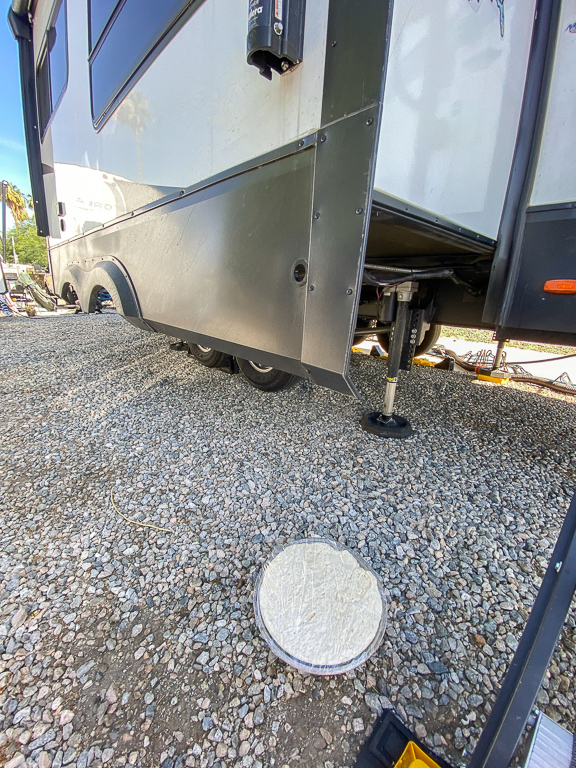 And go well with our homemade alfredo sauce and paste e fagioli. 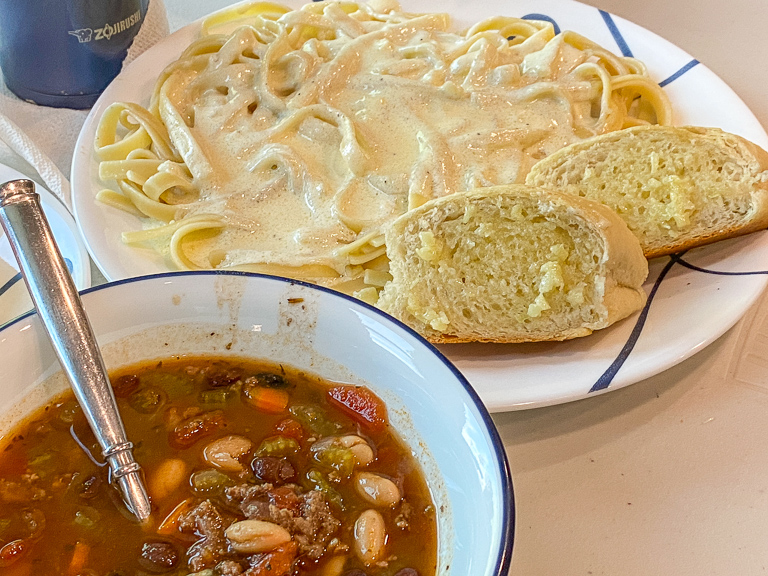 Alli having a monster run in Yahtzee tonight, hitting it twice! 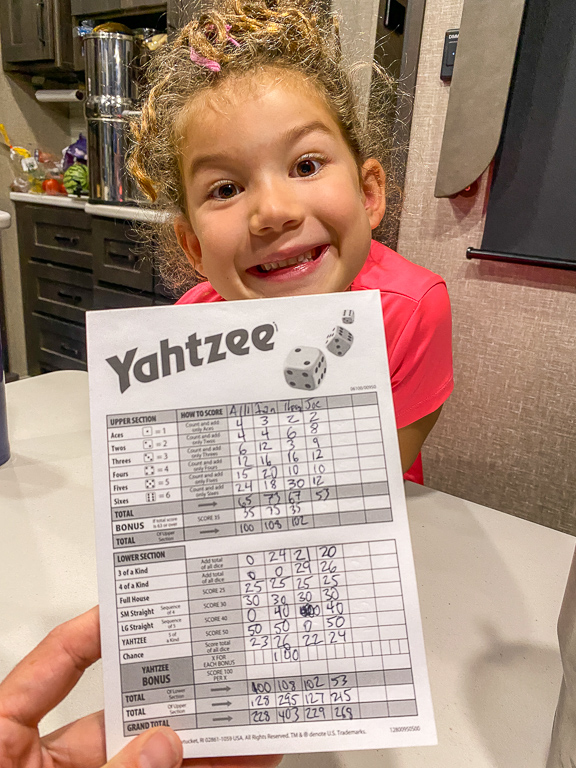 We bought our own copy of Dos now! 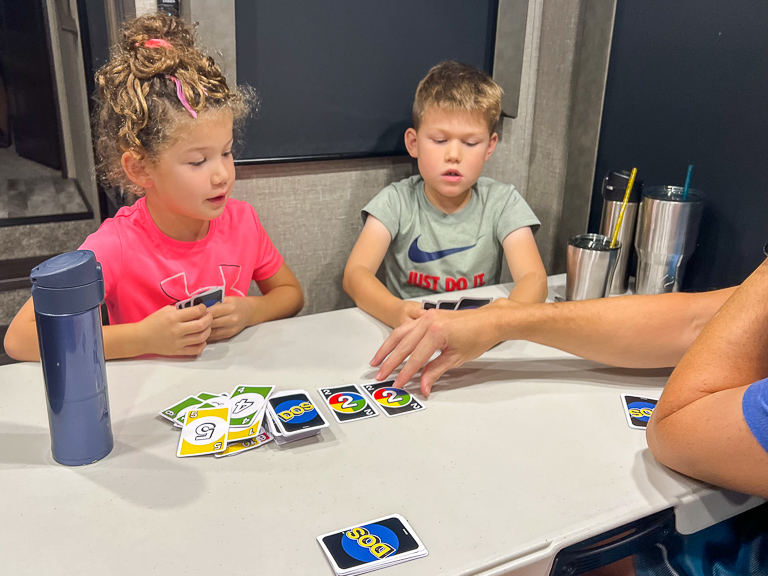 Our new variation of Phase 10 where we each pick a Phase to complete, and you can make them in any order! It makes the game interesting, with people able to go out at any time. We like it because even if you get behind in the beginning of the game, it's still possible to come back and still win. 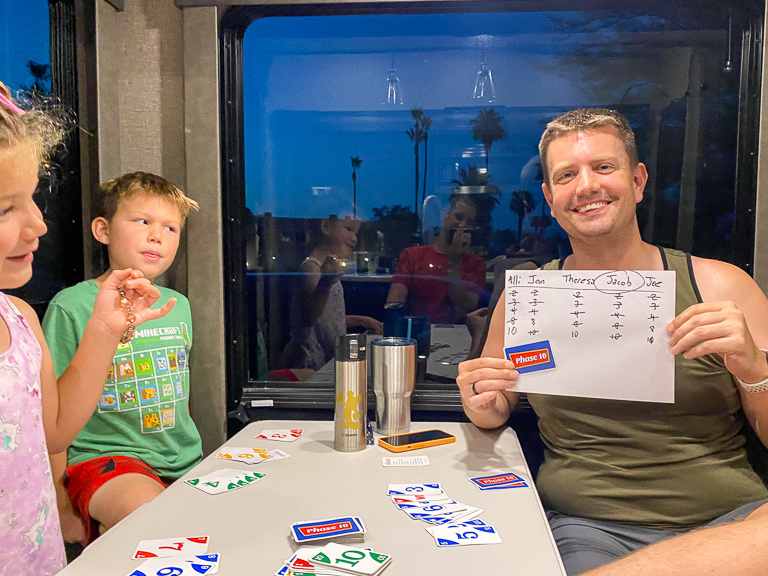 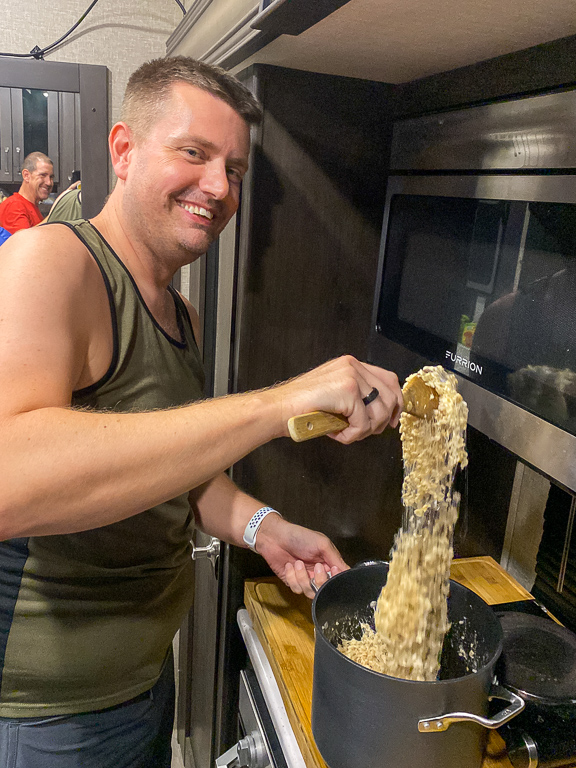 Which we get to enjoy while we play Uno Attack! 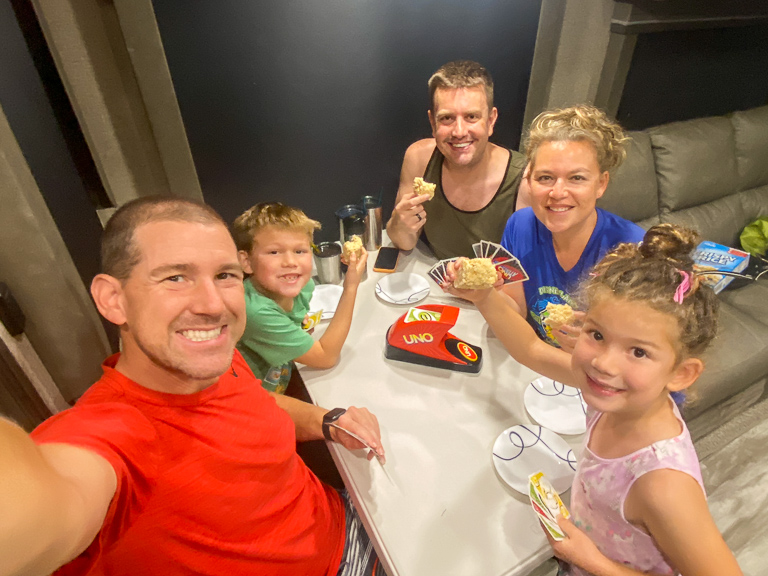 We had a lot of fun with Jacob and got to do a lot of things together. Those adventures will be coming next! 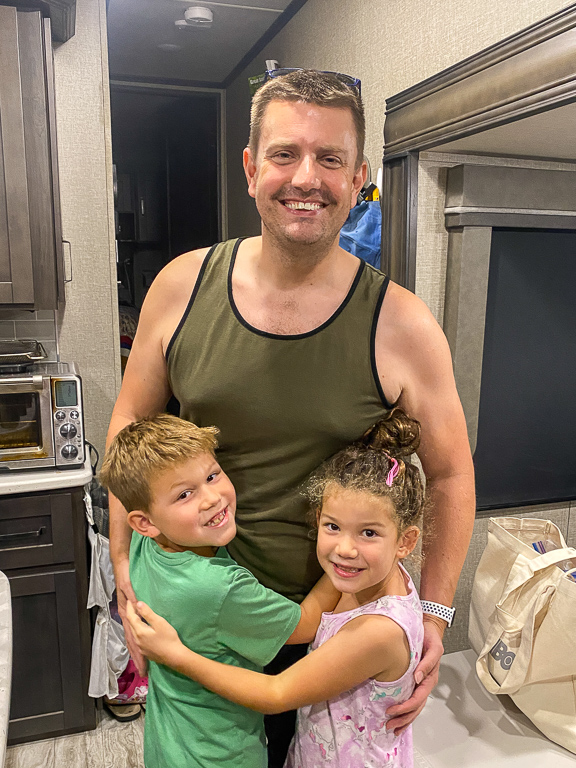