Continuing our stay at the Verde Valley Resort in Arizona. We were fortunate to be able to meet up with some old Disney friends! I met Armand and Robbin years ago as we both shared a love for Disney's Candlelight Processional. 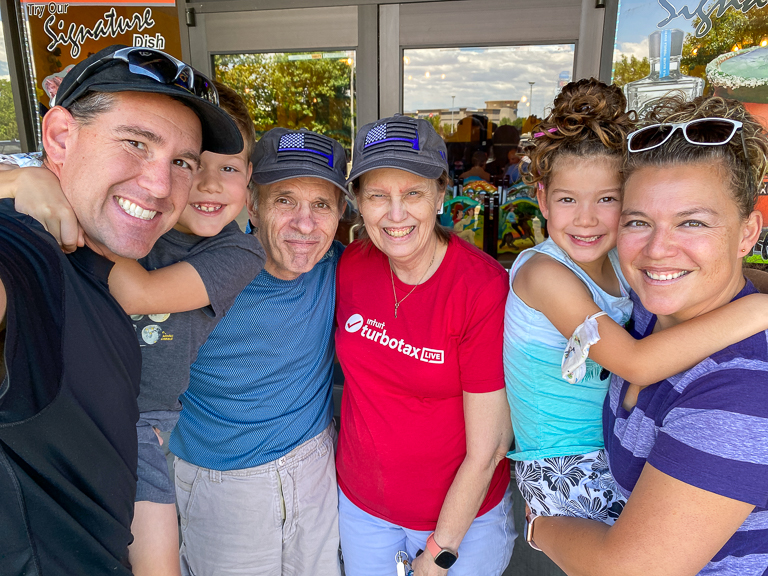 They've moved out to Arizona, and we were lucky enough to be able to join them for lunch. We met at a unique Mexican restaurant up in their neighborhood. They surprised us all with Disney pins and even treated us to lunch. Aww, thank you both! 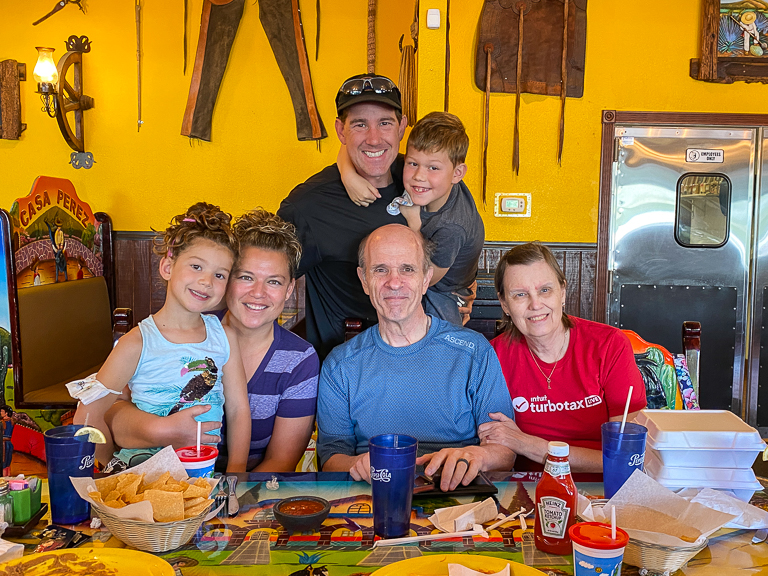 It's always fun to see friends who you haven't seen in a long time. 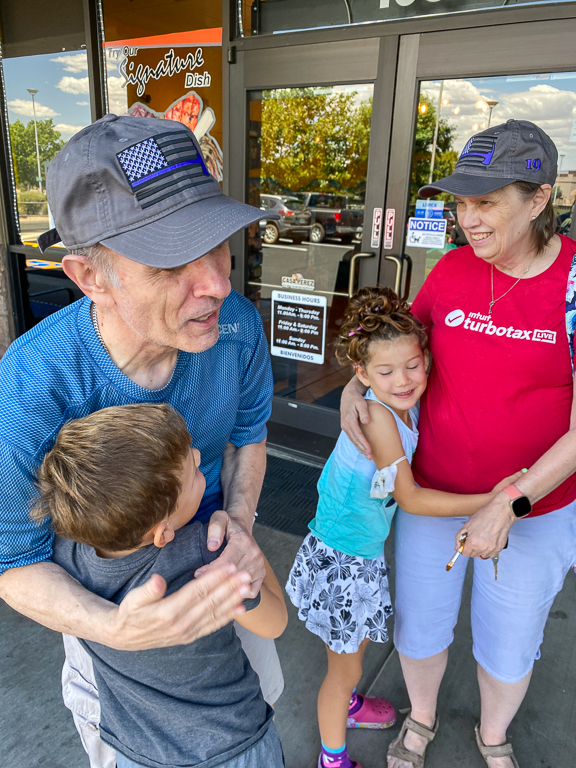 Back at the RV, one morning while Theresa was out and about, the kids wanted to help make bread again, but this time we decided to try to make different shapes. 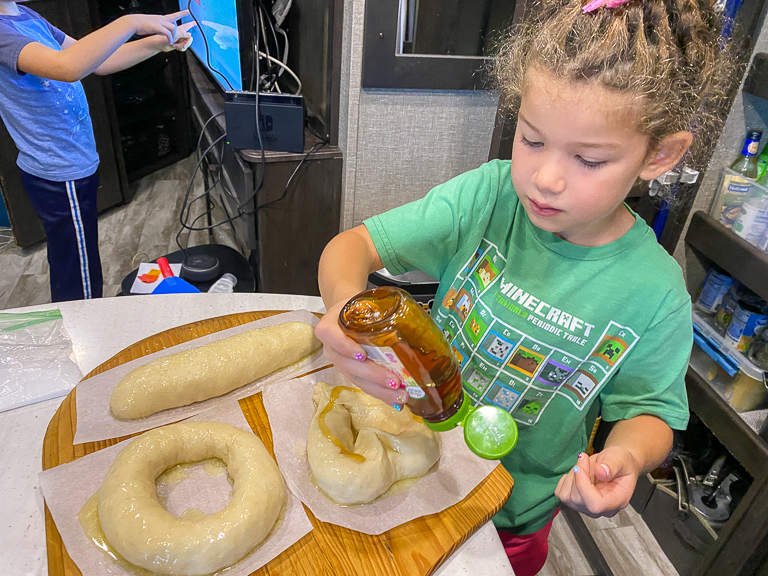 A heart for Alli with a honey glaze, a nice round circle for Ian, and a regular loaf for me. They all were tasty no matter what shape they were. 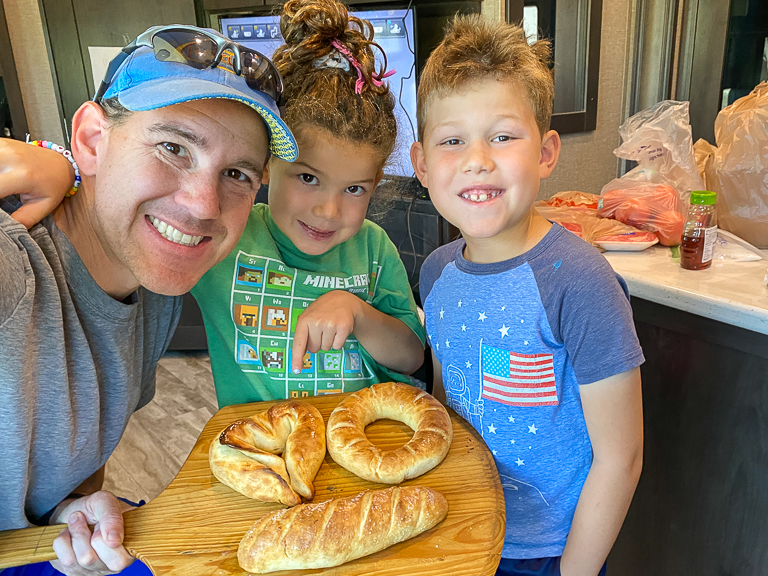 It's summertime so we play a few more video games than we might during the year. Right now we're really focusing on Mario Kart. The kids are getting good too! There was a time when I'd easily take first place. Can you guess who was Pink Yoshi, Gold Yoshi, and Blue Yoshi? Alli took 1st, Ian 2nd, and me 3rd in a team race. 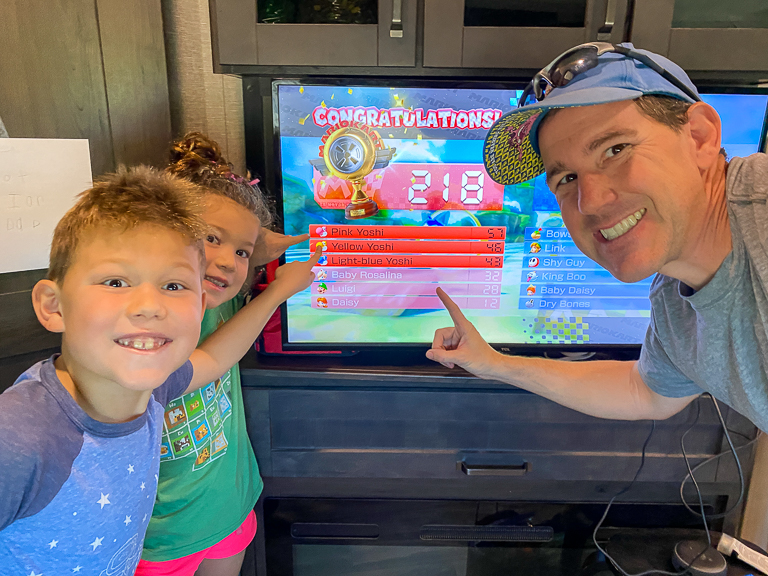 When Theresa got home, we went for a hike to the clubhouse. It's hot outside! 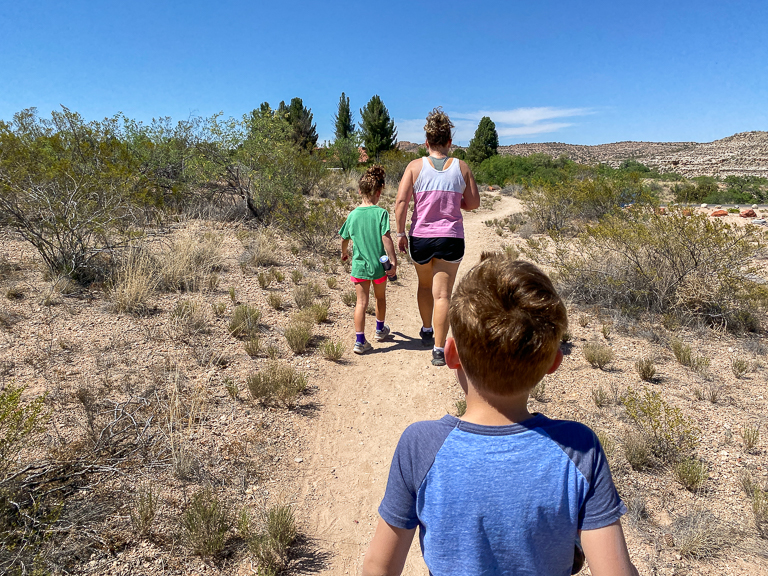 Let's check out their mini golf! 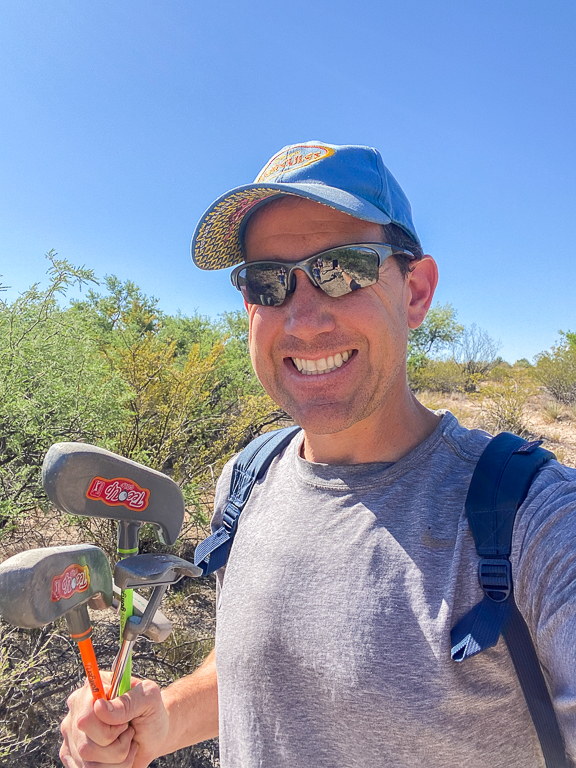 It was a short 9 hole course, and Ian was the only one to nab a hole-in-one. It was neck and neck between me and Theresa but in the end, I took the win by 1 stroke. 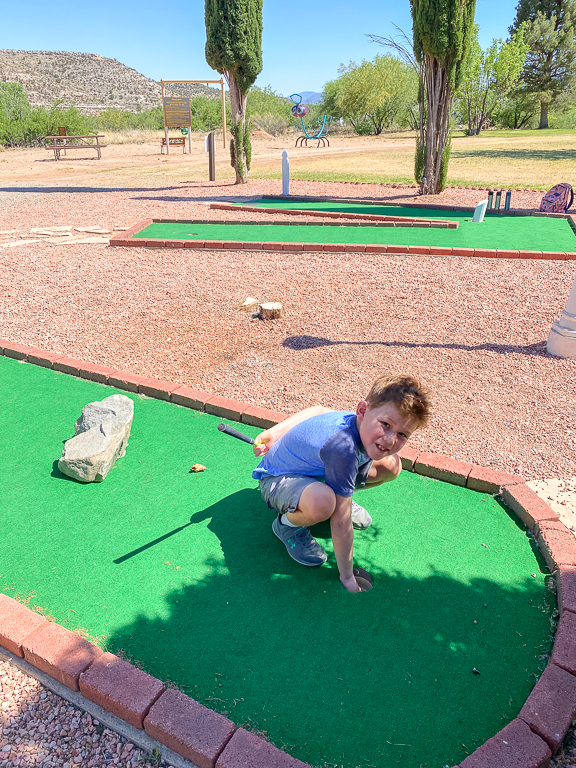 Looking at a map of the campground, we're supposed to be near the Verde River. I bet we could hike to it and find it. 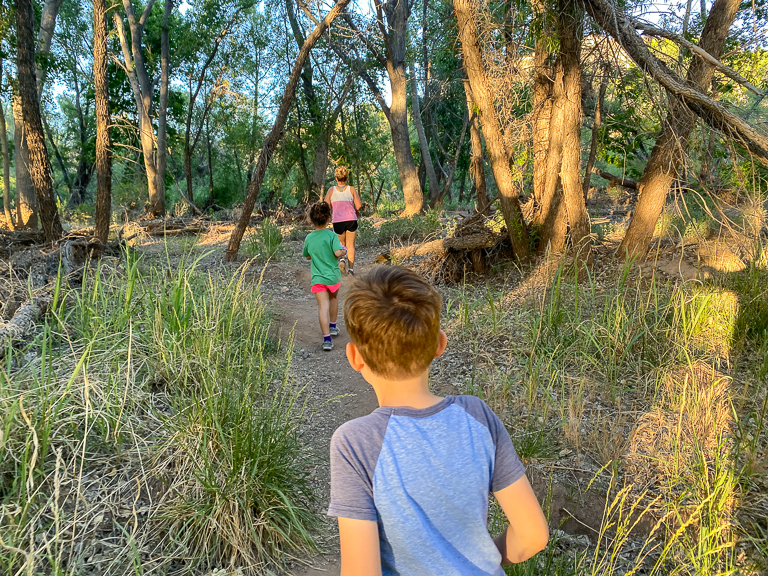 There it is. We enjoyed chucking rocks into it and trying to aim for things on the other side. 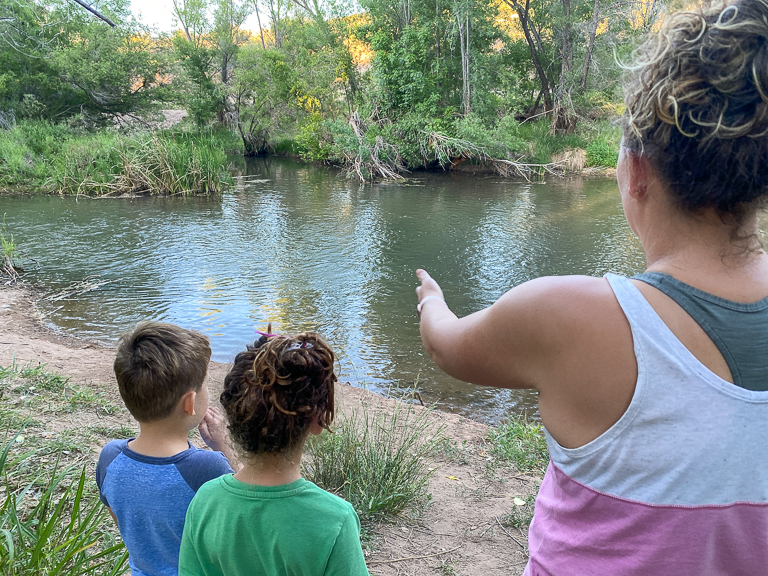 Alli found a cactus that was special and wanted a picture. 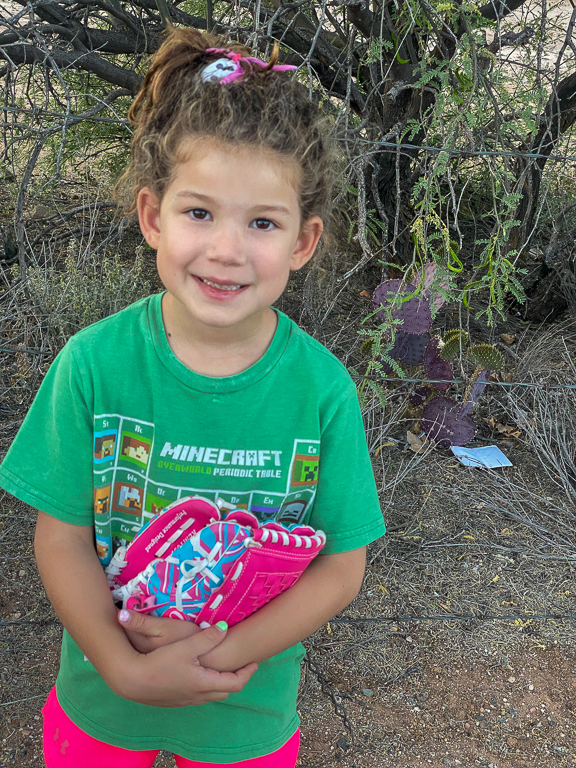 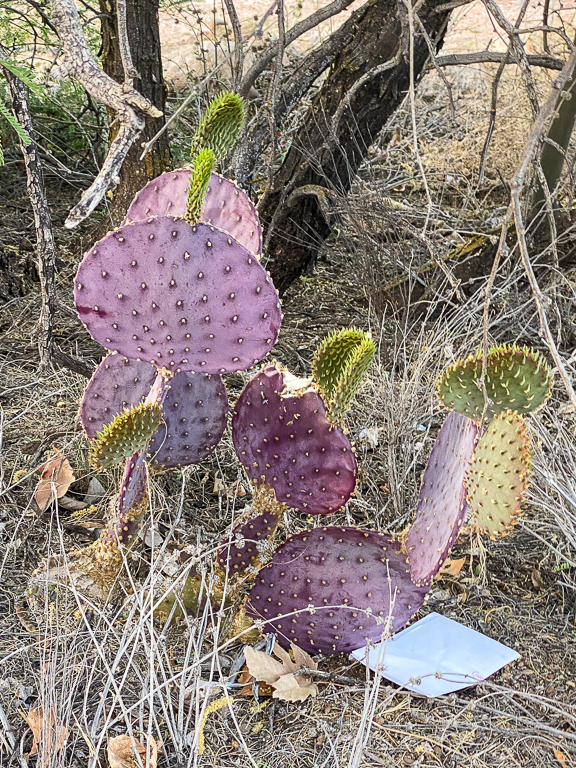 Did I mention that it was hot in Arizona? A few times? Good. Just a reminder, it is hot, even after the sun starts to set. Many times the resort had sprinklers set up to keep the grass green. After our evening walk and before showers, they decided to go have fun with one. 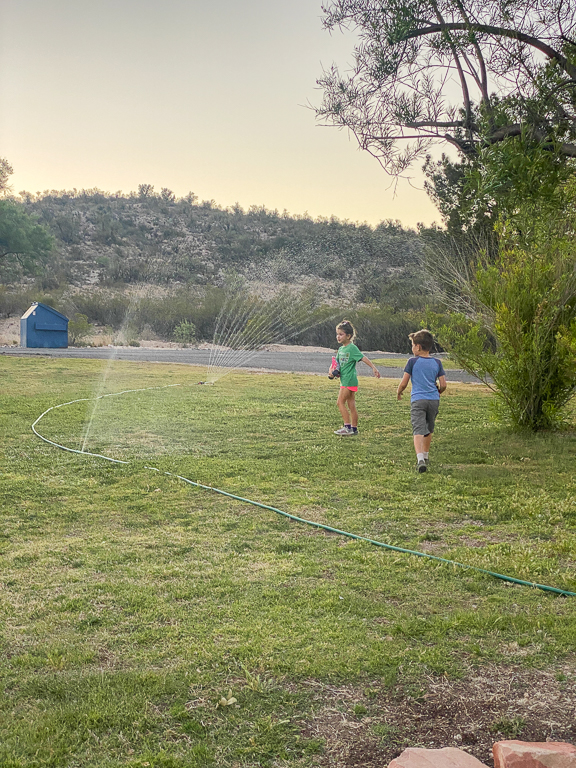 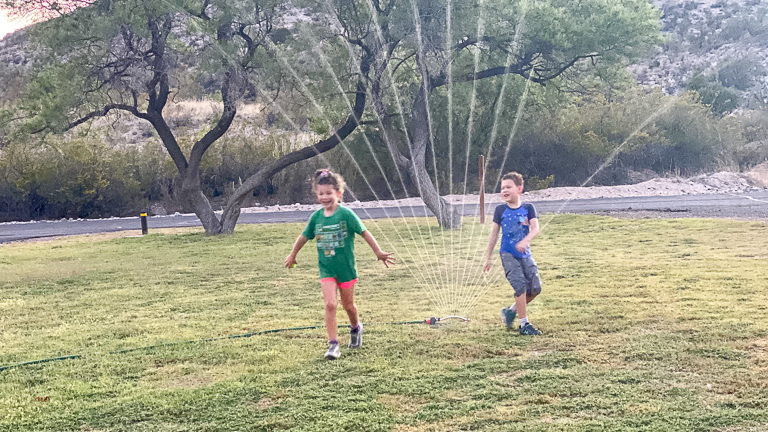 But they had a lot of fun. 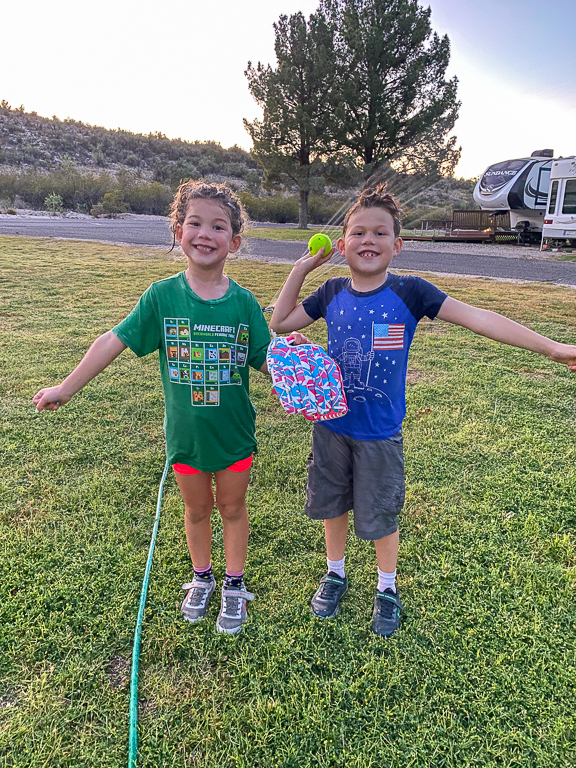 They called it Wetball.
I think it was Theresa who mentioned pretzels, so while she was out and about, the kids and I decided to make that happen. 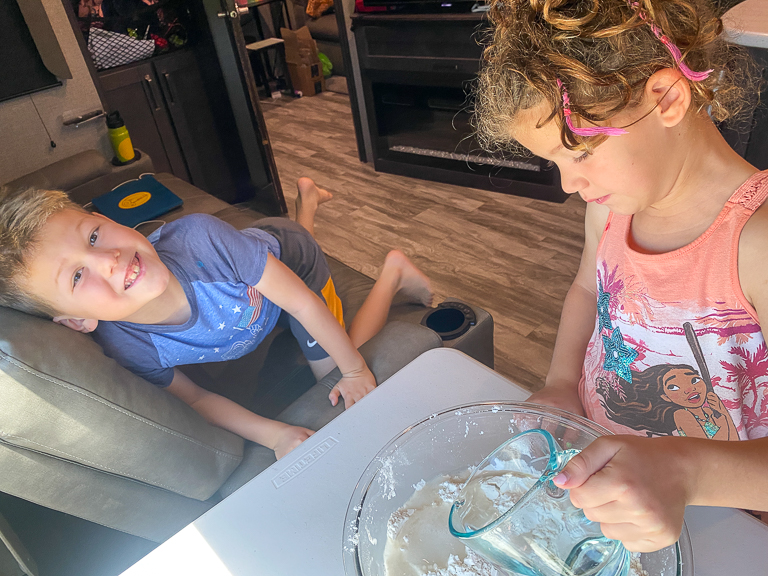 I helped mix up the dough. 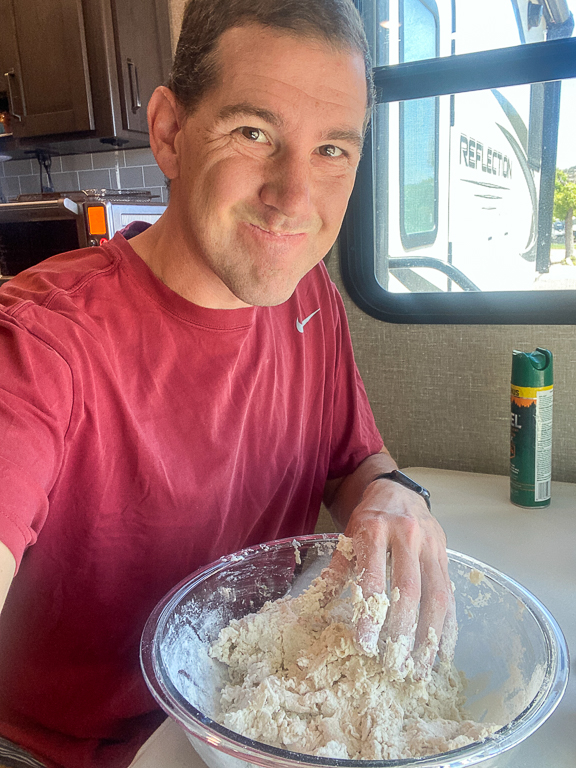 Now we've got to knead it. A stand mixer would be nice, but we'll make do. 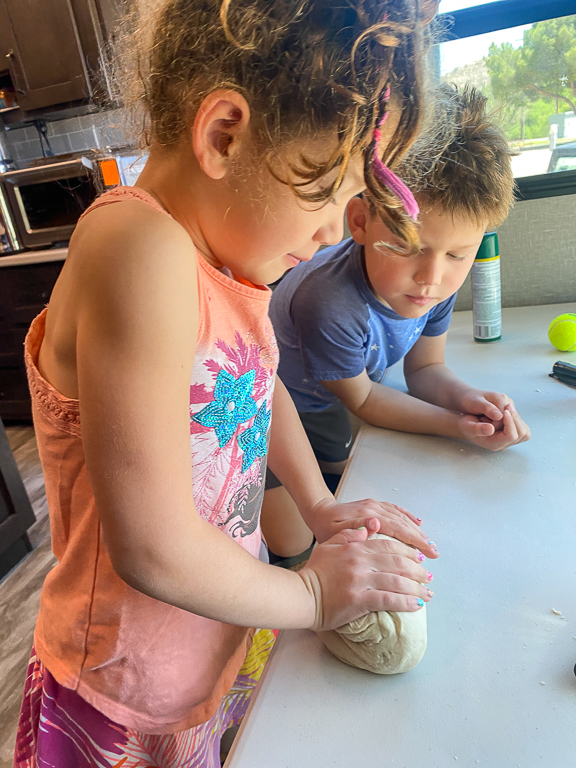 Using all their force, up on their tip-toes, and even off the ground to work that dough. 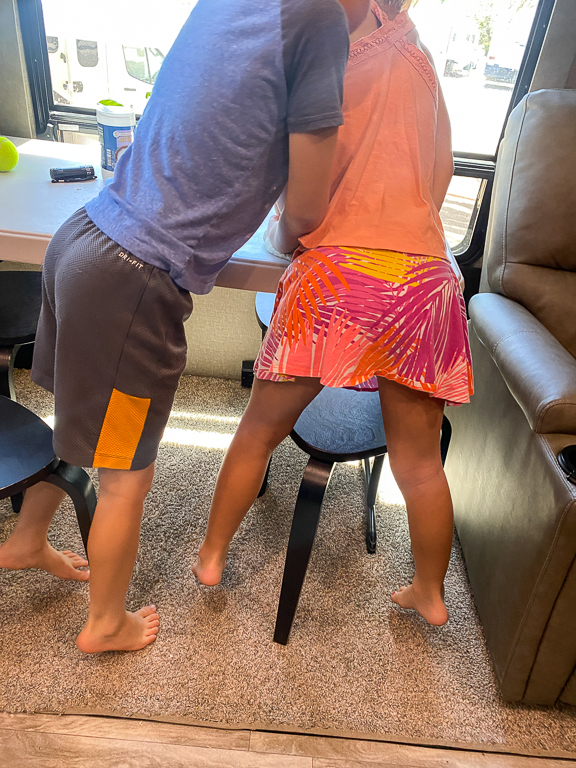 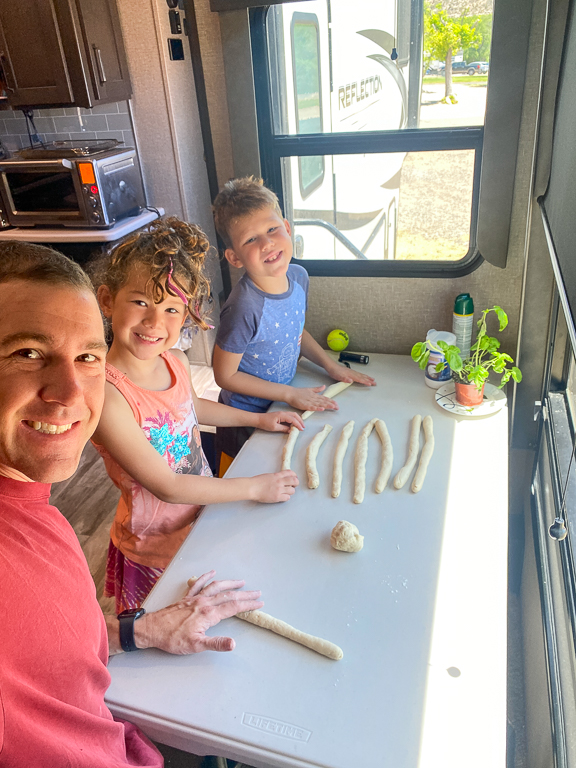 Then I showed them how to twist and tie them into a pretzel shape. 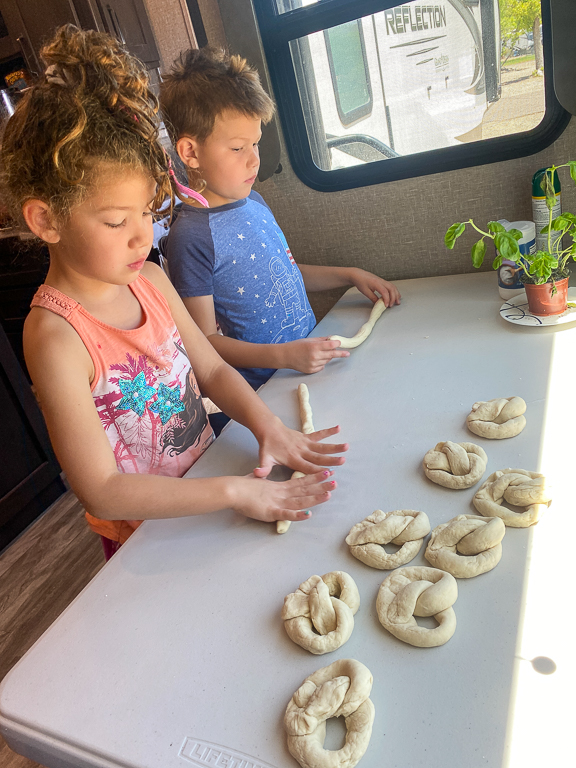 Toss them into boiling water with baking soda. 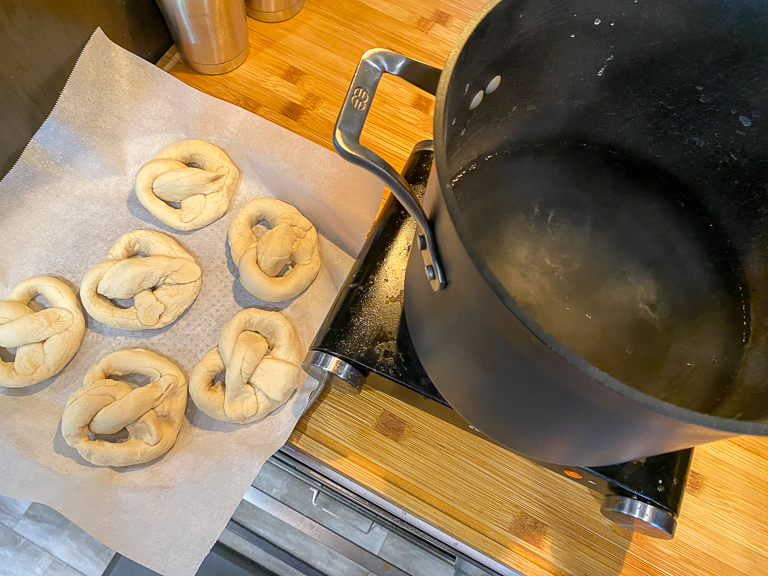 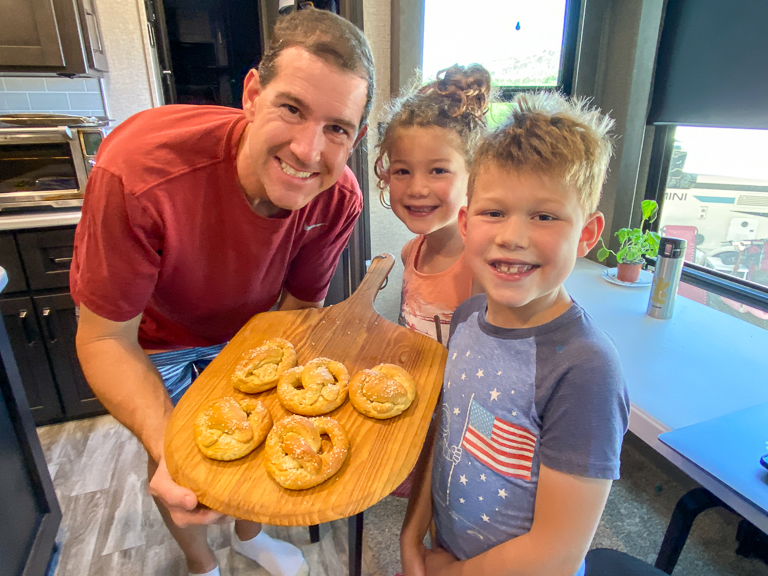 And they come out fantastic! 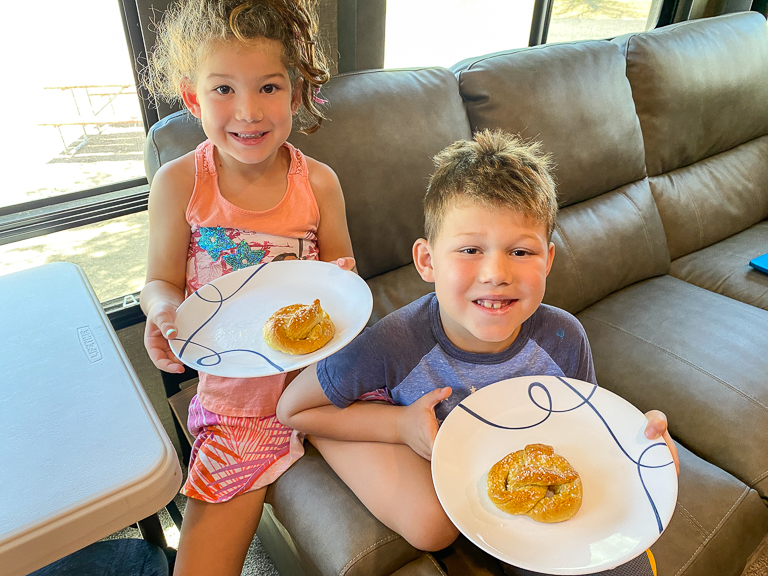 There's not too much of a playground here, but they have fun. Anyone remember that old Milton Bradley game called Cooties? This reminds me of that. The kids called him Mister Fuzzy. 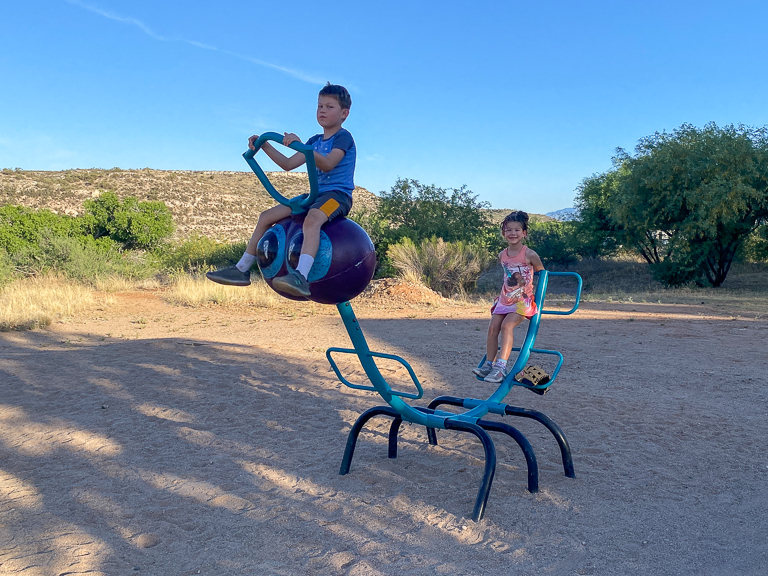 Another trip to the river to chuck rocks. 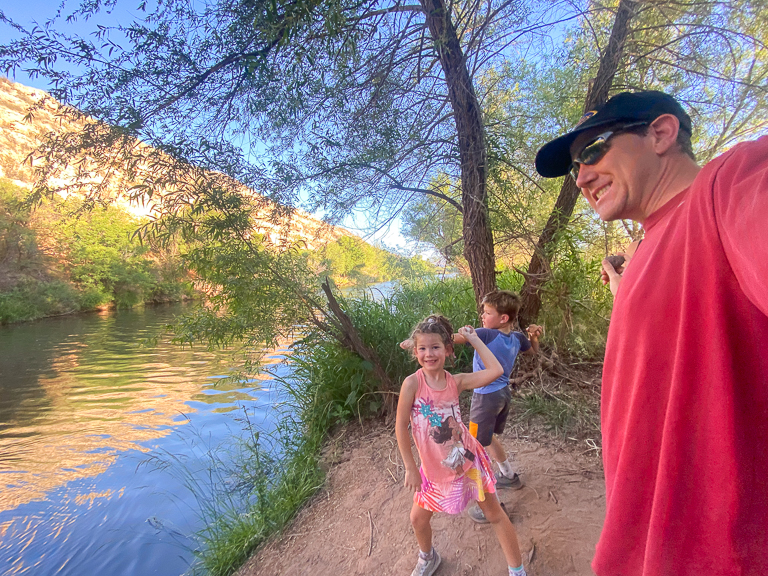 Ian has been wanting to play ping pong since he saw the table. We're working on it. Gotta practice a bit more. 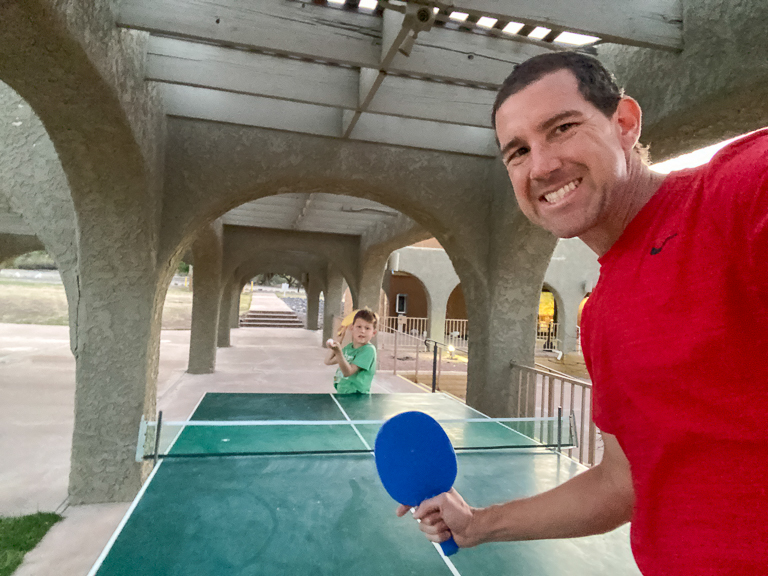 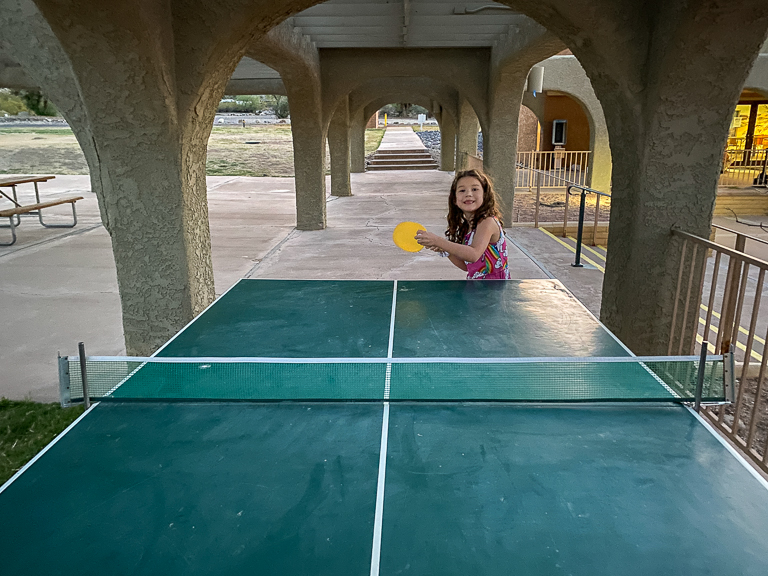 The way in and out of the valley had this super steep section. I was glad we started taking the stabilizer pads off the RV on travel days because I'm worried they might have scraped! I measured in the truck one time and it was a 9% grade!
Verde Valley, it's been fun! Next we're headed to Phoenix! 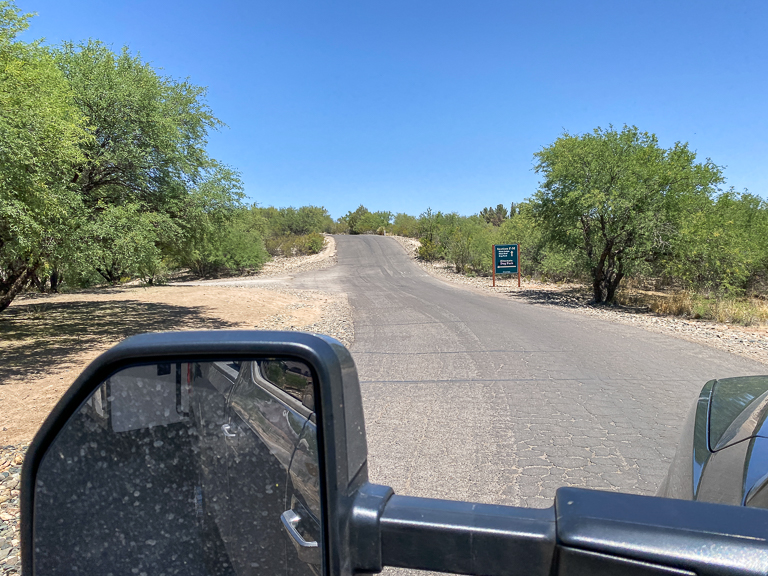