Happy Sunday! We are back to traveling again and today we're in Arizona! I've been enjoying doing pizzas that are themed to the state we're visiting, and I think I can come up with something for Arizona. My main ingredient is something I have no experience cooking with, but I'm excited to give it a try. 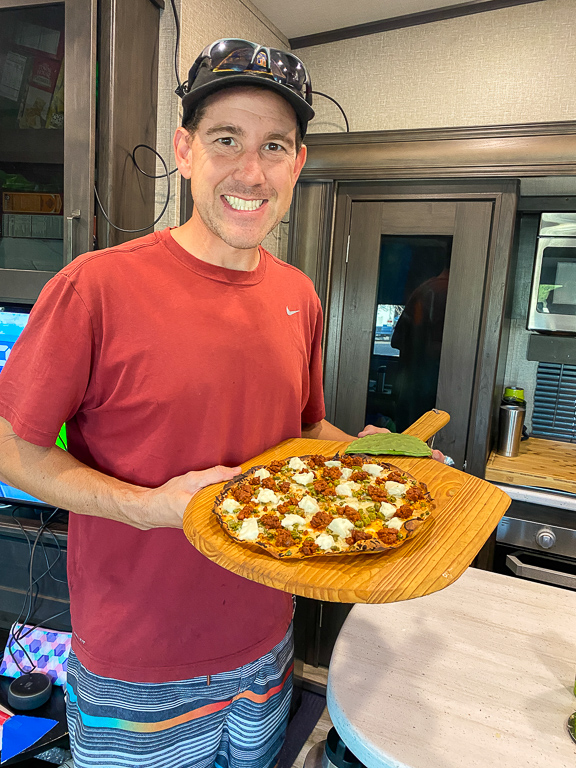 Today's special pizza ingredient is... Cactus Paddles, also known as Nopalas. We've gone on a few hikes while we've been here in Arizona and we have seen plenty of these Prickly Pear Cactuses. 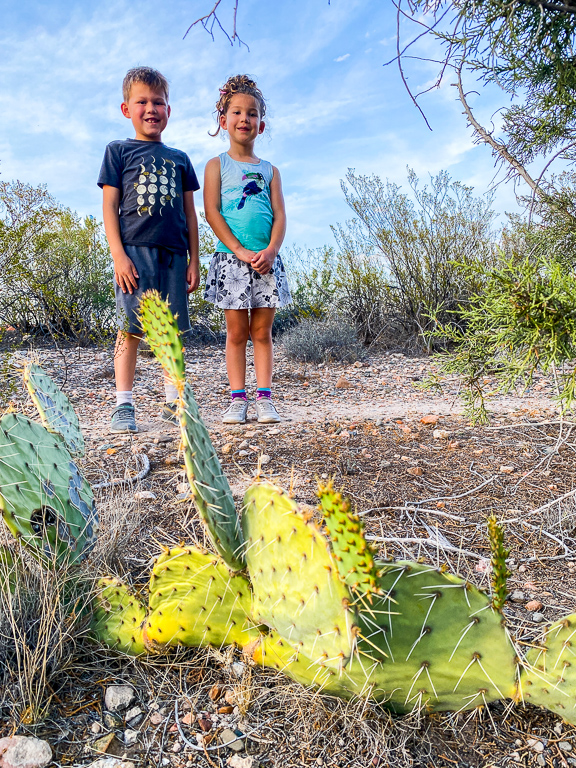 These today though came from a local Mexican Market. 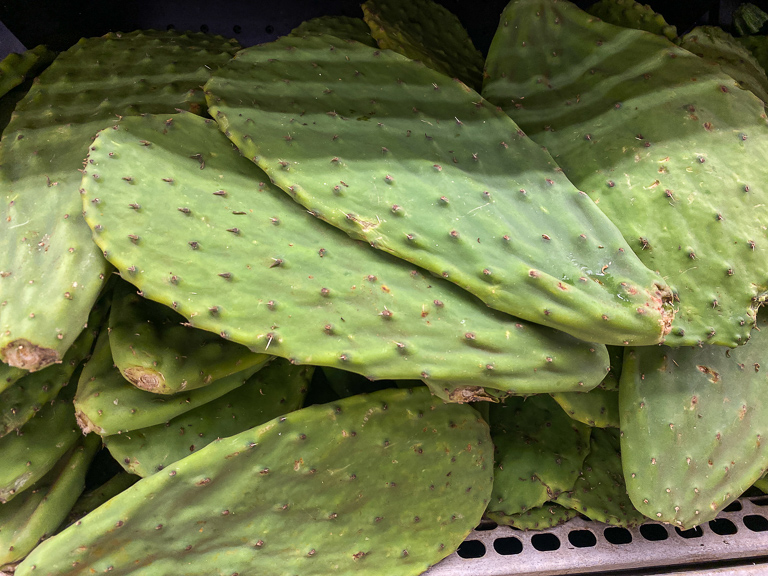 While I'm there I also picked up a few more ingredients for my pizza tonight. Like a little bit of Queso Fresco and Chorizo. 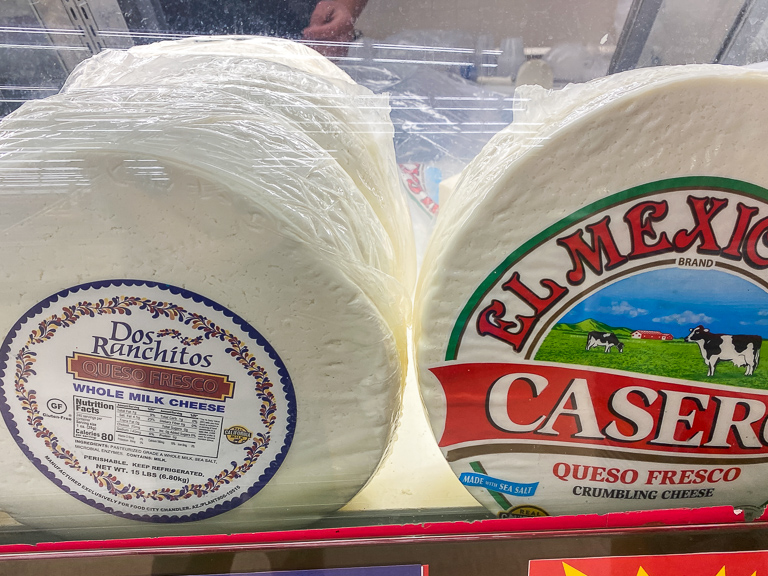 My main ingredients for my pizza tonight. 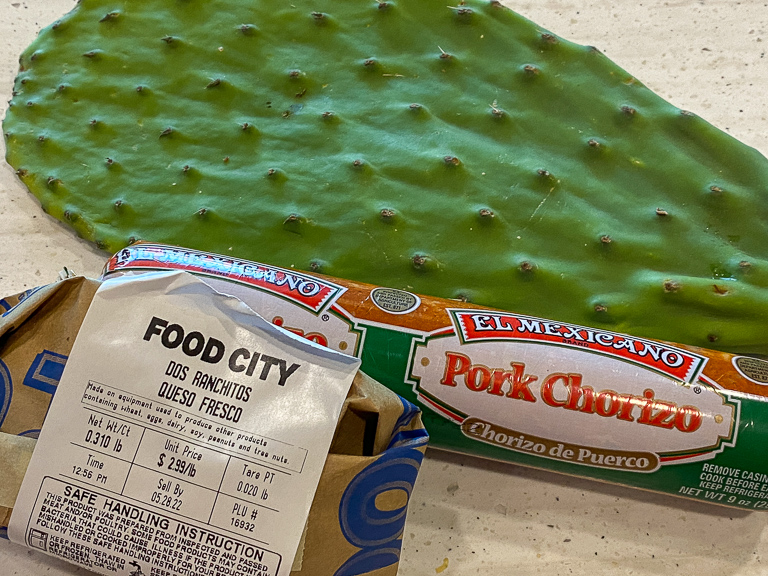 Whoever provided these to the grocery store took care of most of the cactus spikes, but not all of them. Indeed, I felt a couple prickles, and even after I was done prepping everything I pulled a spike out of my finger. 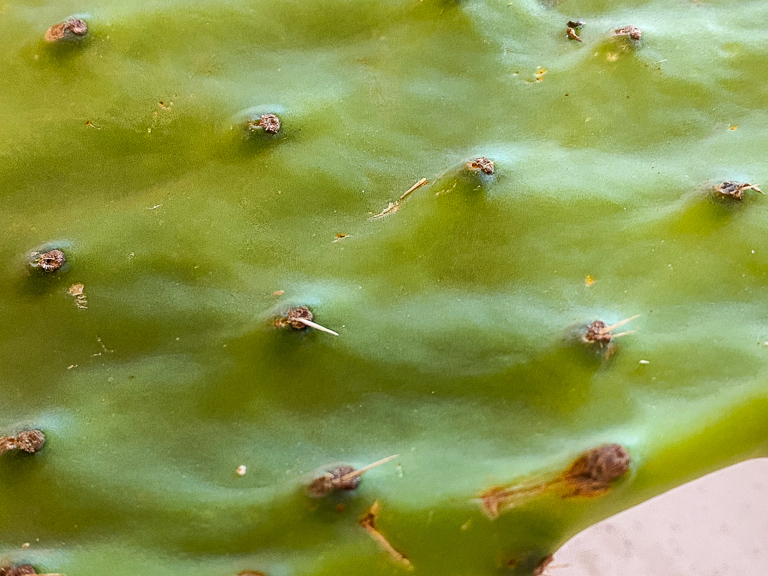 Those spikes and brown bumps won't be good eats, so I took care of all those with a vegetable peeler, trying to leave as much of the green skin as I could. Something has to hold all this together after it cooks.
I diced the cactus paddle into tiny bite sized bits that would work well on a pizza. Nothing too big or chewy. Next it's time to cook them! What's your guess, will these sink or float in water? 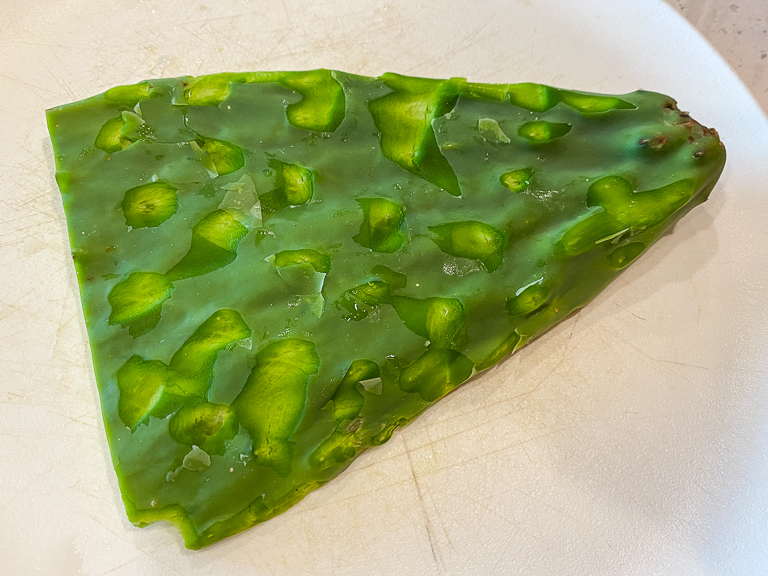 Turns out they float! Along with a little bit of salt, these boiled in water for about 10 minutes. 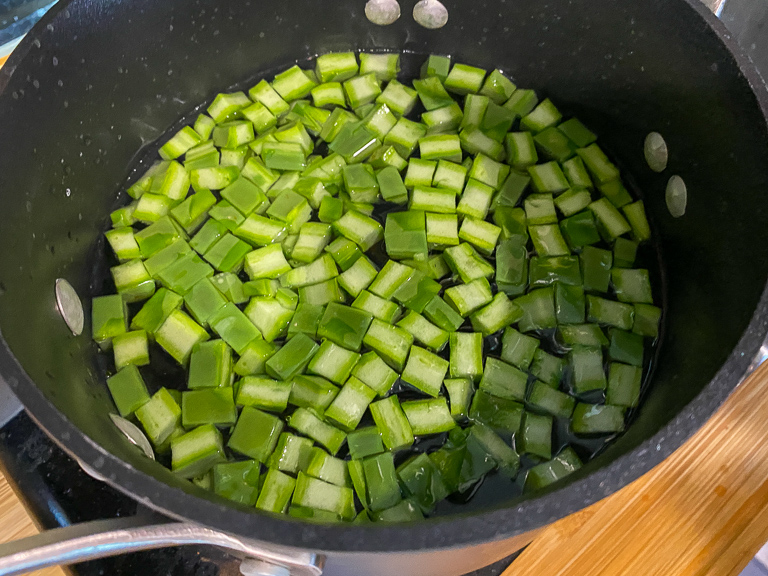 In my research ahead of time, I learned that cooking these is similar to cooking Okra. They release a gelatinous "slime" that you want to get rid of. I rinsed off the cooked cactus bits a few times and that seemed to do the trick. 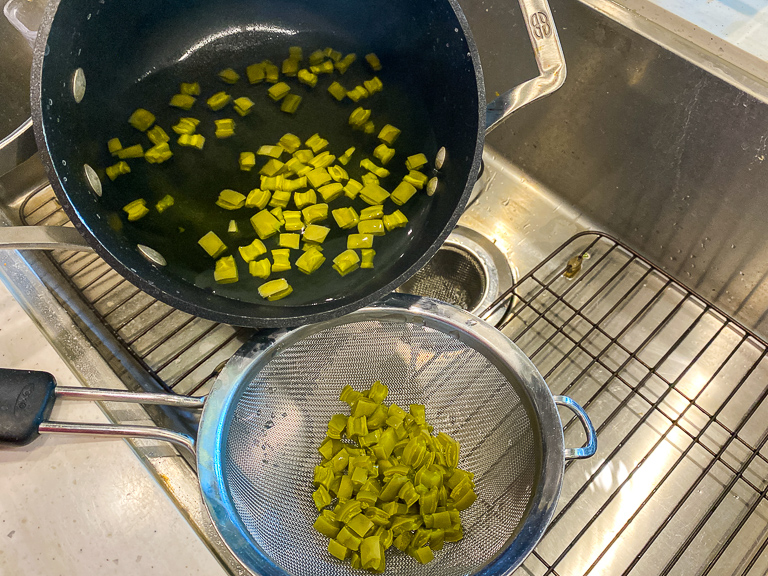 Next up is the Chorizo. I don't think I've ever cooked chorizo either. I've eaten it, but never made it myself. It's a lot more liquid and wet than I was expecting. What's in chorizo anyway? 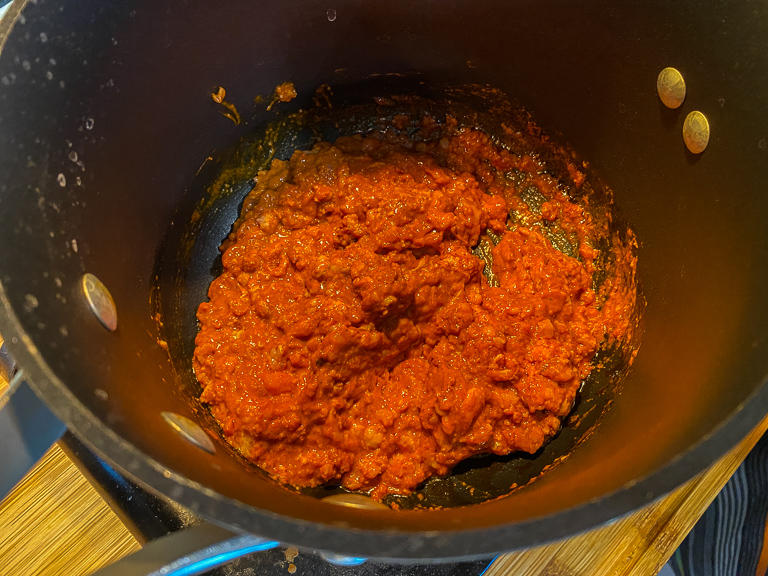 Huh. Well I guess it's like hot dogs. Just eat it and don't ask what is in it.
So it's pork byproducts, including pork salivary glands, lymph nodes, and fat. Well... it still tastes good. 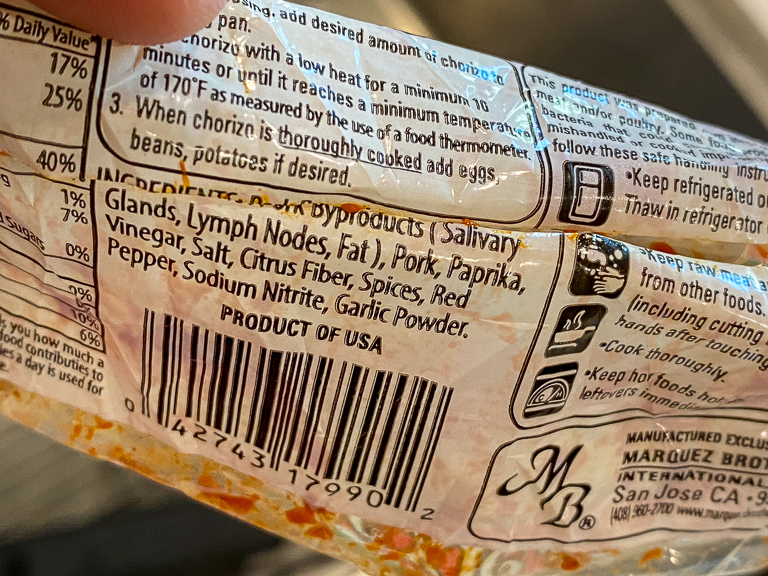 Next I heated some oil in a pan and tossed my cactus bits and some onion in to get a little bit of color on them. 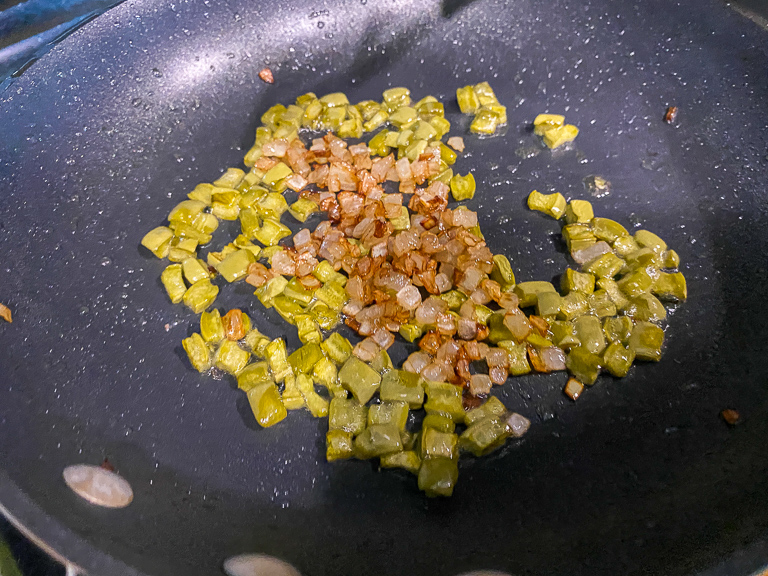 The main toppings for my pizza tonight. I tried to drain what fat I could off the chorizo. 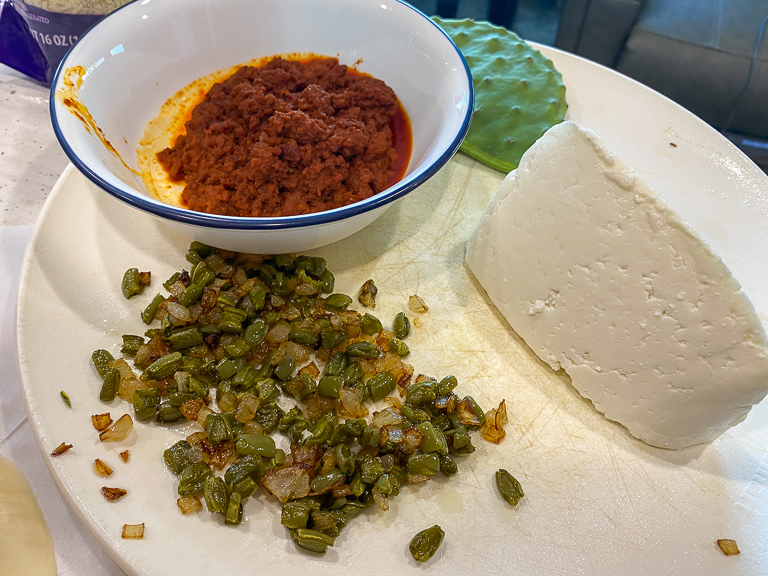 Assembling my pizza tonight. Thin crust again. Of course it's thin crust. All this year I've made thin crust because the family likes it so much. 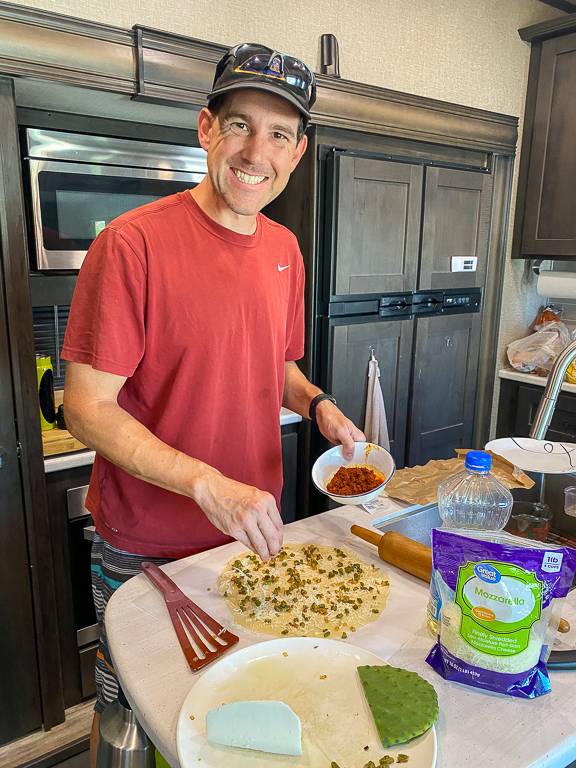 No sauce underneath. Just a light coating of oil, then topped with a little mozzarella cheese, followed by the rest of the toppings. 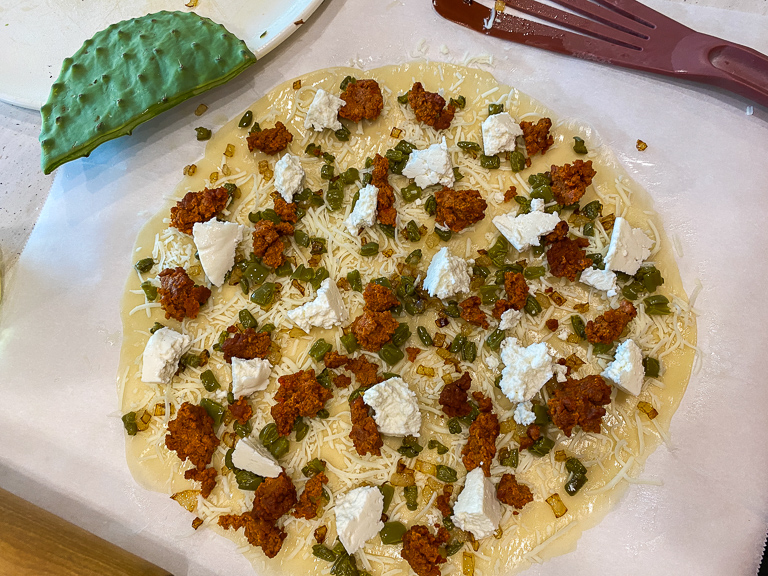 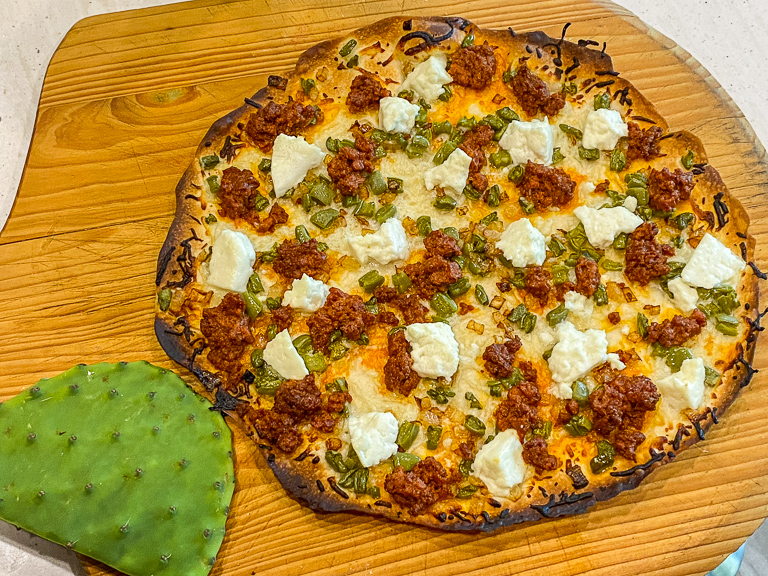 The kids got their own pizza with pepperoni, plus mushrooms and olives (they're liking more and more things now). We also made a meat pizza, with Theresa taking a quarter of it and piling the olives and mushrooms high on it. Plus we always like to make a Therizza pizza because it's so delicious. 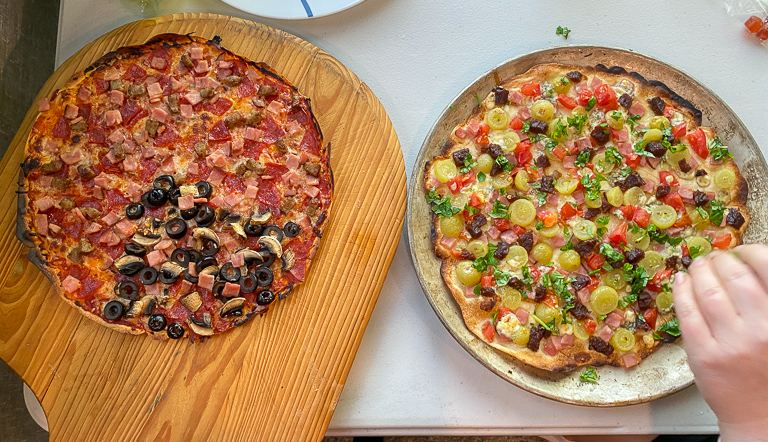 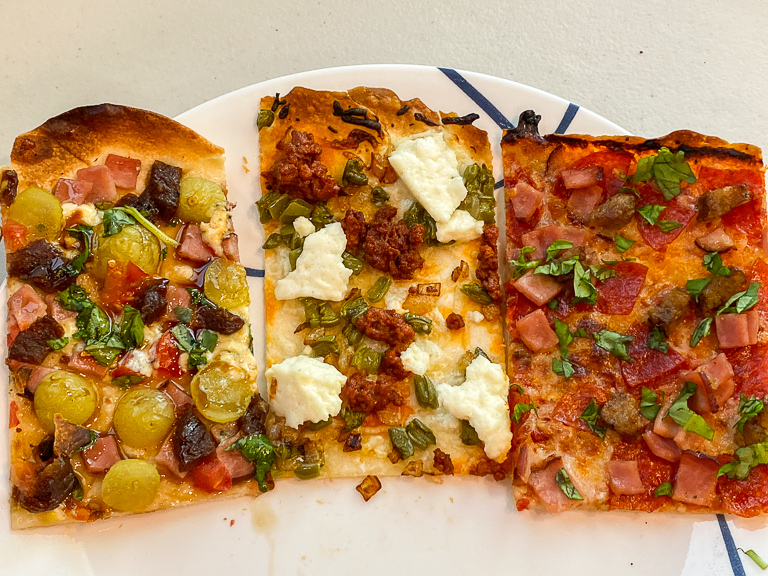 How was the Cactus Pizza? Truthfully I was just going for "interesting" when I came up with this one, but it was actually tasty! The Cactus Paddles really remind me of what jalapeños taste like, but with none of the heat. The queso fresco is a fresh squeaky cheese which I thought worked pretty well with this one. If I had to do something different, I would cut down on the amount of chorizo. The flavor of the chorizo is very strong and a bit overpowering. A little less chorizo would let the cactus and onion come through a little better.
Still, this was a fun pizza to make for Arizona! 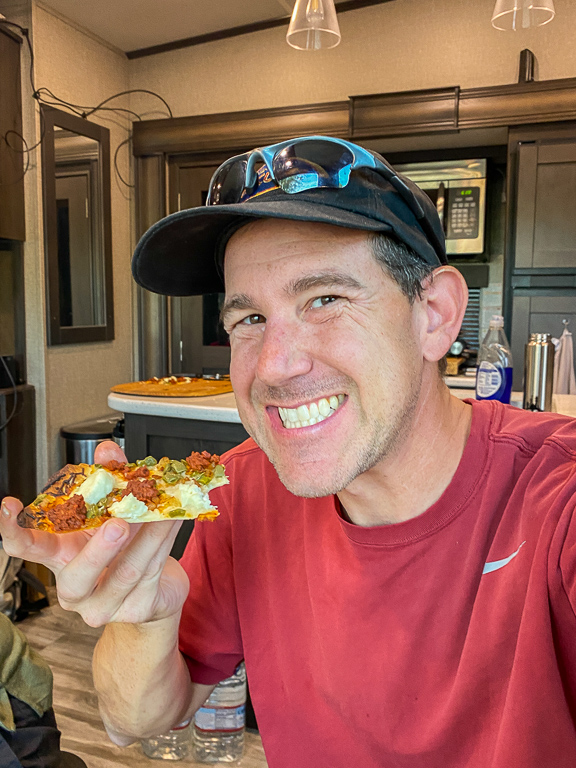