A lookback at our time participating in the Pasadena Chalk Festival

After years of watching from the sidelines, in 2015, Ruston and I decided to try to participate in the Pasadena Chalk Festival! Read on for our experiences each year! 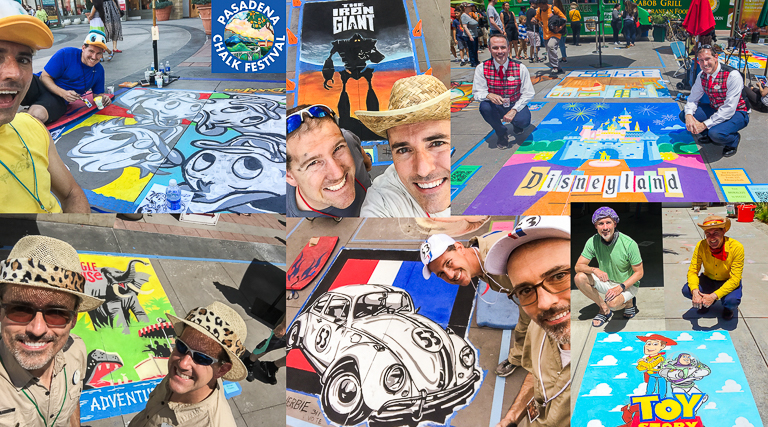 2015 was our very first year participating.
We made sure to practice in my driveway. And then attended the Practice session with Randall Williams the week before the event. The first part of the day was very frustrating. The pavement wasn't at all like the pavement in my driveway. It wouldn't take the chalk in the same way. By lunchtime we were thinking we were in over our heads and thought about giving up. But with the encouragement of fellow artists, we pushed through the rest of the day. When we got back the next morning, our mural was in rough shape. Footprints, bike tires, and all sorts of things ran over it last night. Good lesson for next time. Things need to be taped off overnight. We pushed on through the rest of the day and when the time came for judging, we were floored when it was announced that the "Best New Artists" were Ruston and Joe! Wow, talk about a rollercoaster of emotions over just a few days. 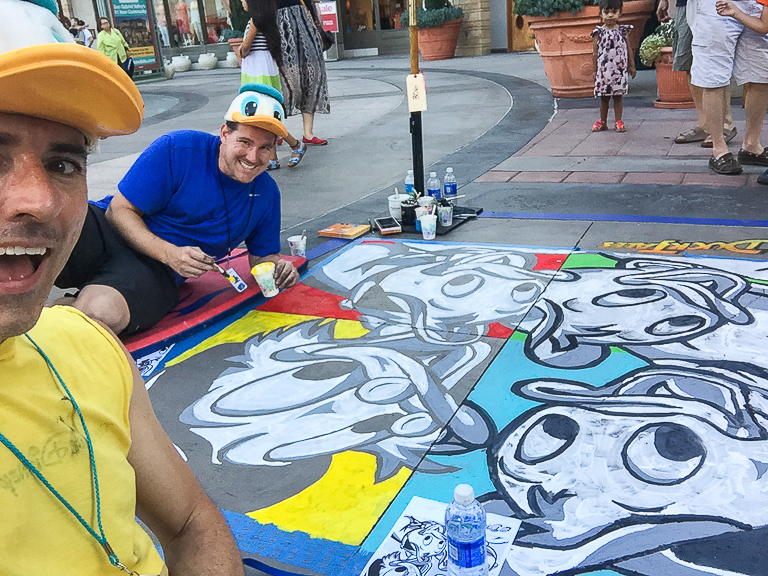 After that crazy year of 2015, we decided to go again in 2016. This year's theme was the Iron Giant. I remember that with all the lessons we learned from our first year, this year went a whole lot better. And I remember it was super hot! 106F in Pasadena! 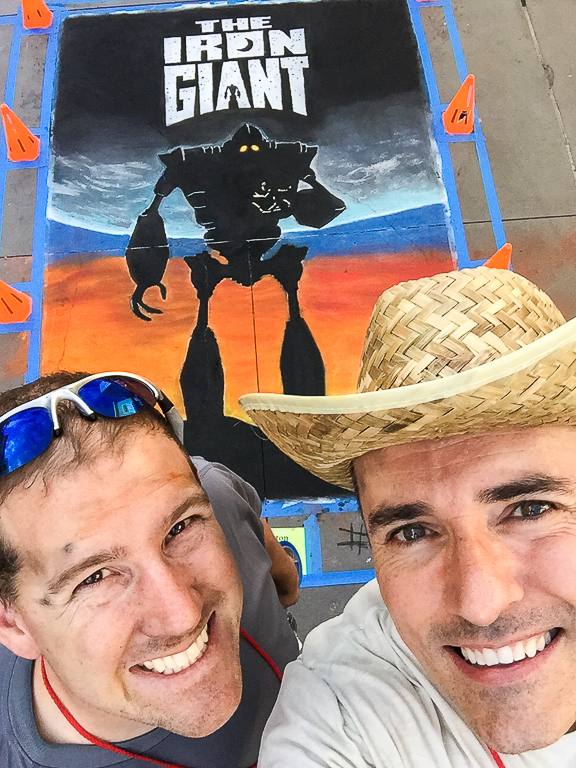 For 2017, we really kicked off our dress-up game. Along with our mural on the ground, we're also Jungle Cruise Skippers! Practice in my driveway helped us feel confident we could complete this one in time. And it was fun dressing as skippers, because we could joke around with guests as they walked by. No awards this year, but we had a good time. And my 1'x1' canvas I donated sold for $135! Awesome! 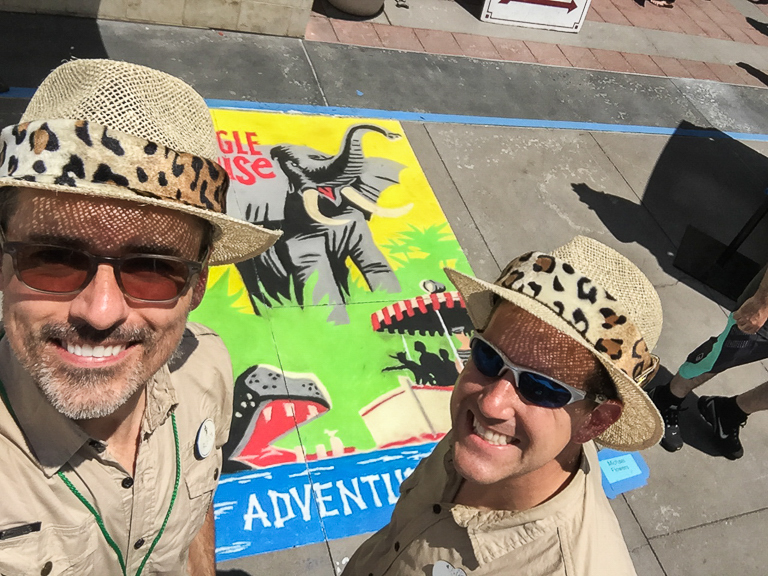 Who doesn't love Herbie? He's the Love Bug after all. In 2018, we paid tribute to him and the 50th anniversary of The Love Bug. Practice in my driveway was good. Day 1 went really well with us completing almost all of it. And Day 2 was easy going. I loved our Mechanic jumpsuits. And at the end of the day when awards were being given out, ours was voted "Most Humorous!" Awesome! 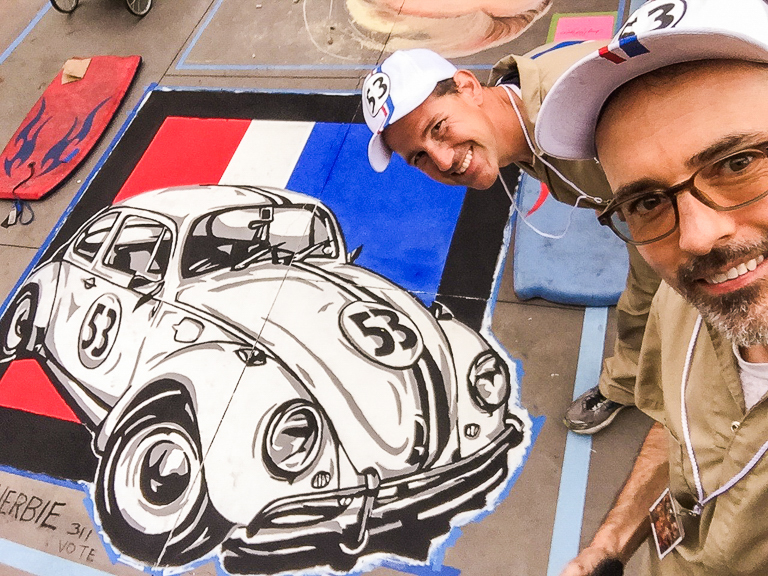 I love incorporating the costumes with our mural. In 2019 we went for something really ambitious. The super clean Disney Plaid costumes that the tour guides wear around Disneyland. Could we chalk all day and still come away clean? We did! And it looked so bright and vibrant! In the end, we were voted "Most Colorful". 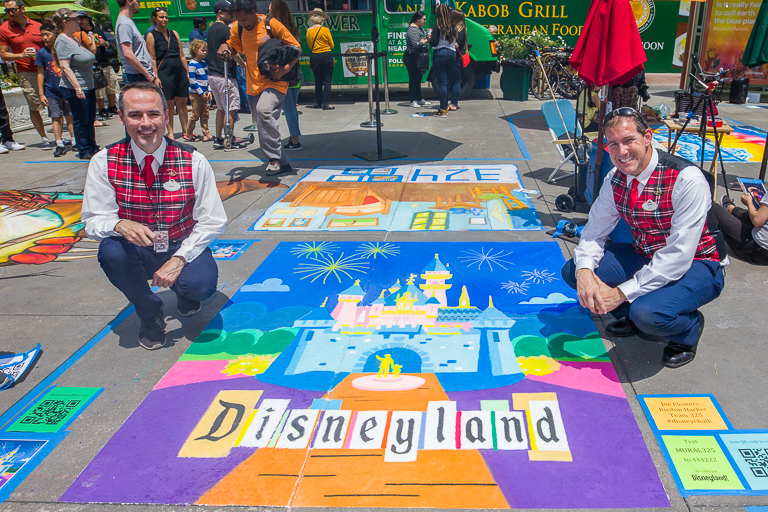 In 2020, because of Covid, the chalk festival went virtual. Ruston and I are a great team, and even though we're separated, we still wanted to do something together. A buddy-buddy film was the perfect inspiration. And how would we do it together? I took my half and chalked it in my driveway in Redondo Beach. Ruston had his half and did it in his driveway in Pasadena. Through the magic of Photoshop, they combine into a single mural. 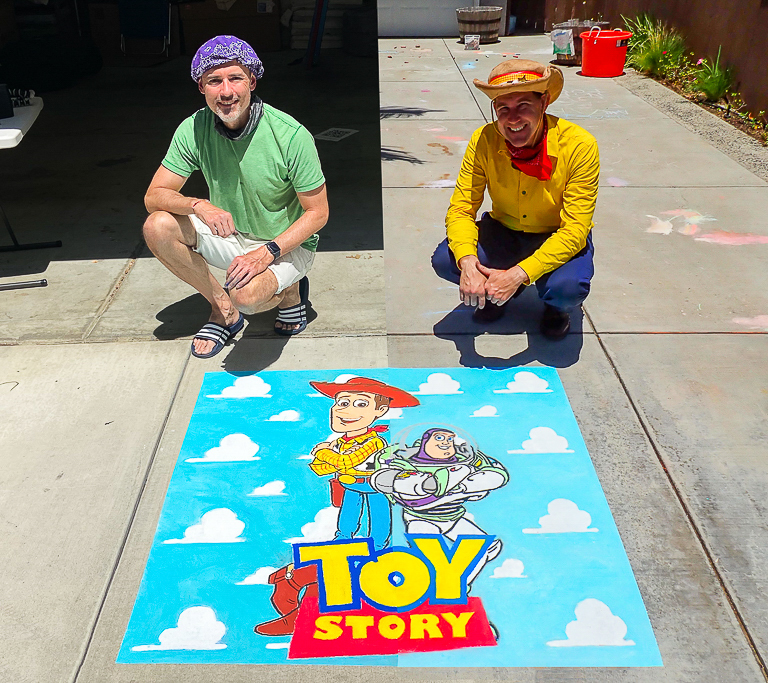