Time for us to head back to Colorado from Michigan. We'll be spending a couple more weeks here before we get back onto the road in our quest to make it to the West Coast.

Remember those cookies Rita made that were just for me? Just for me. They came out a short time later on the plane, with many of them going to the kids and Theresa. Thanks for picking us up from the airport Pop Pop! When we got home, we delivered a sack of White Castle from Chi to my mother. Mom does love Krystal burgers, and White Castles are a pretty close substitute. 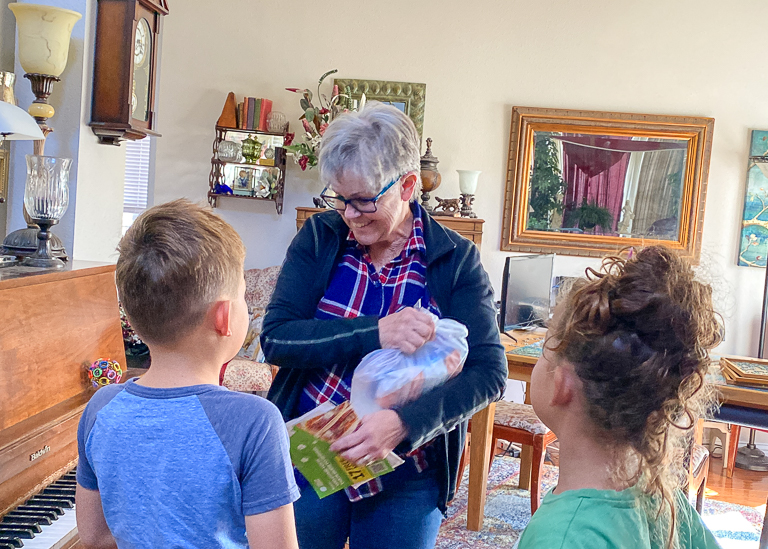 The kids love doing things with their cousin Avery. They love making crafts and somehow Ian got the idea to build a raft. The best place to test it is in a big tub. 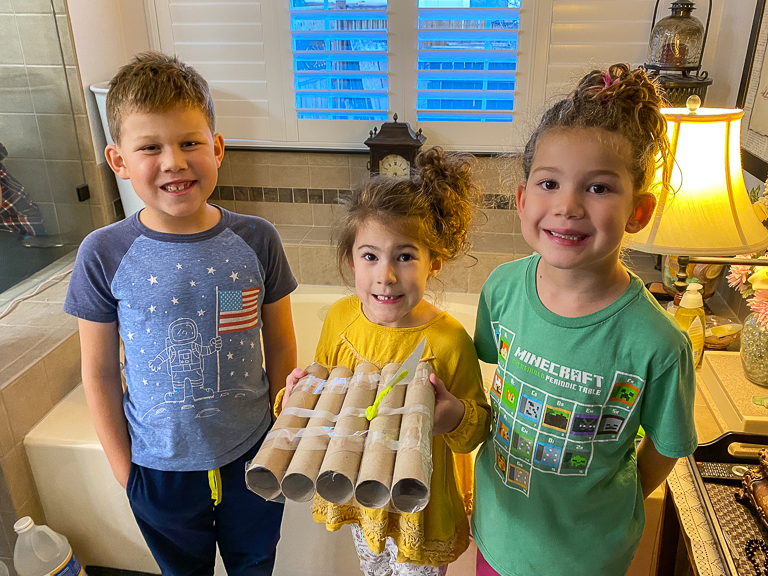 Let's see how it did.
I was very happy to see this puzzle almost complete when we got back. These types of scenes take me forever to assemble. Once they got it completed we were free to move on to the next one. 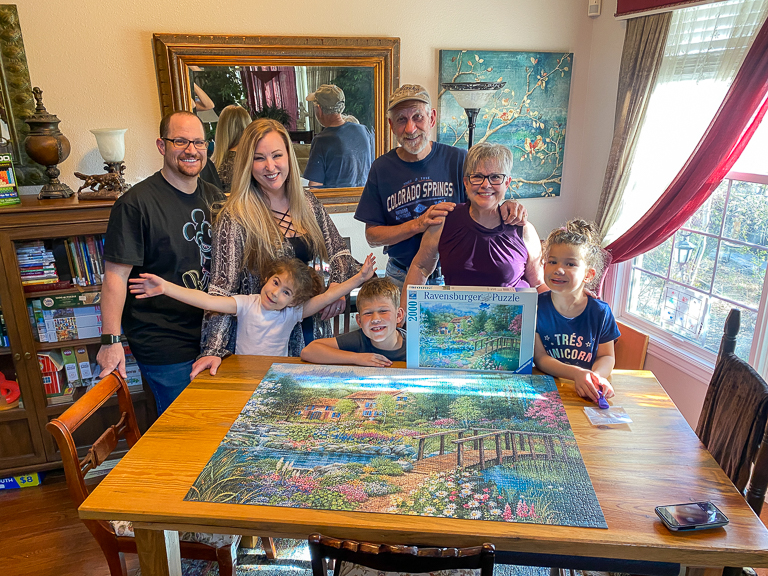 Like this periodic table of elements puzzle. It was a lot more simple and straightforward to put together. 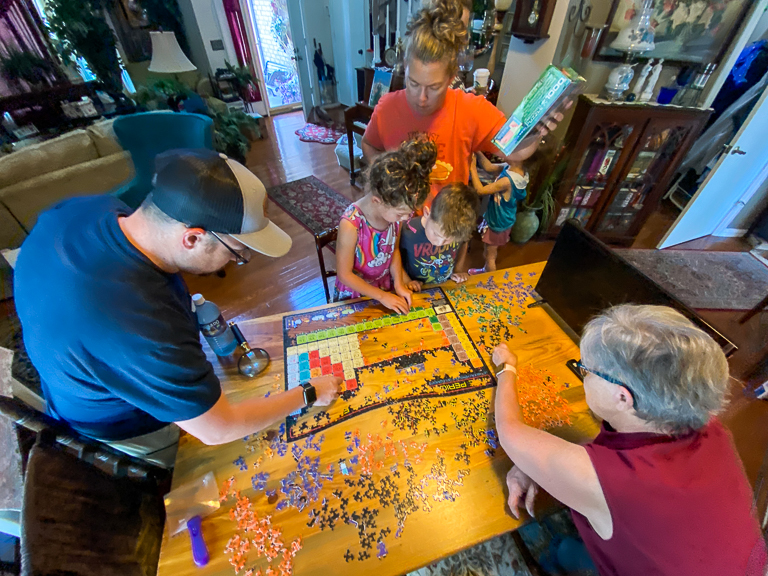 Done in just a few hours! 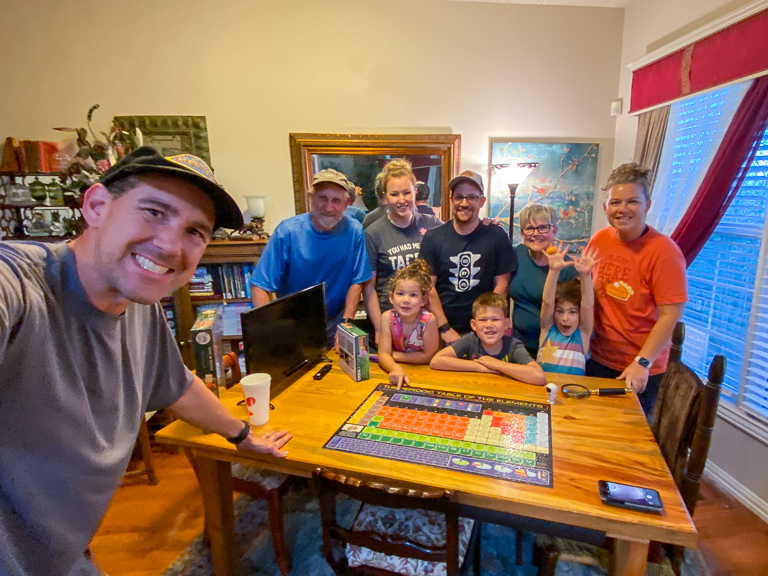 Our next door neighbor dropped off some chocolate covered strawberries for all the mothers to enjoy on Mother's Day. 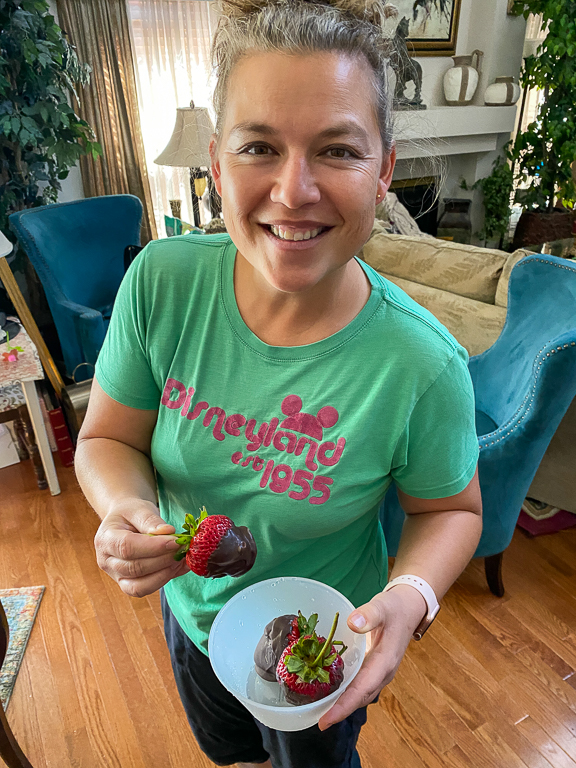 The kids do love playing together. 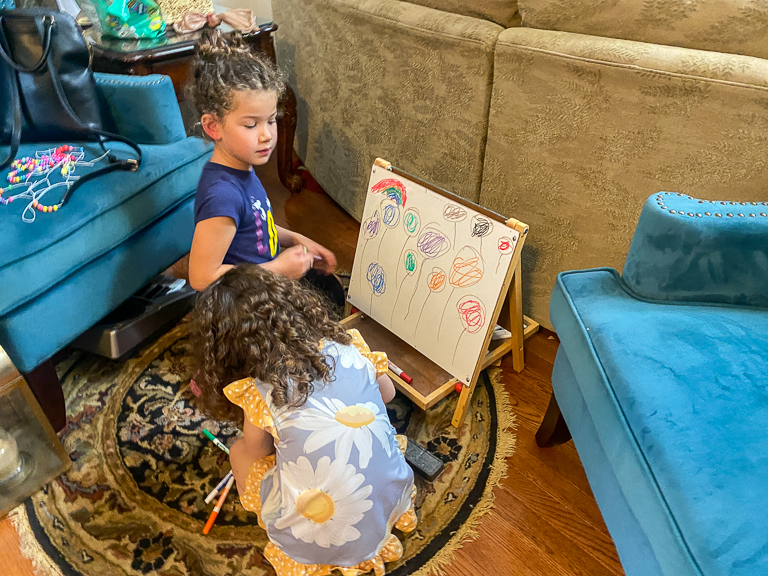 Time for a healthy lunch! 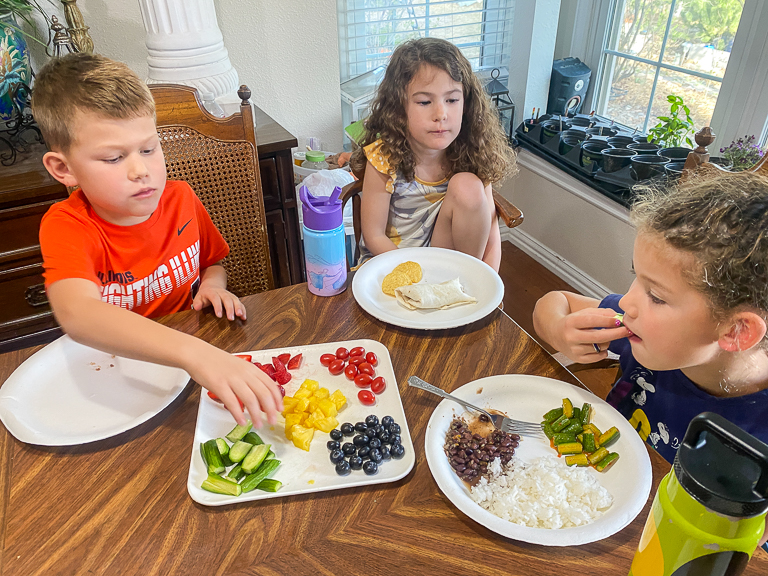 The kids would spend hours playing games if they could. Here in Colorado, with Pop Pop and Gram they can! They got through a round of Life on Saturday. 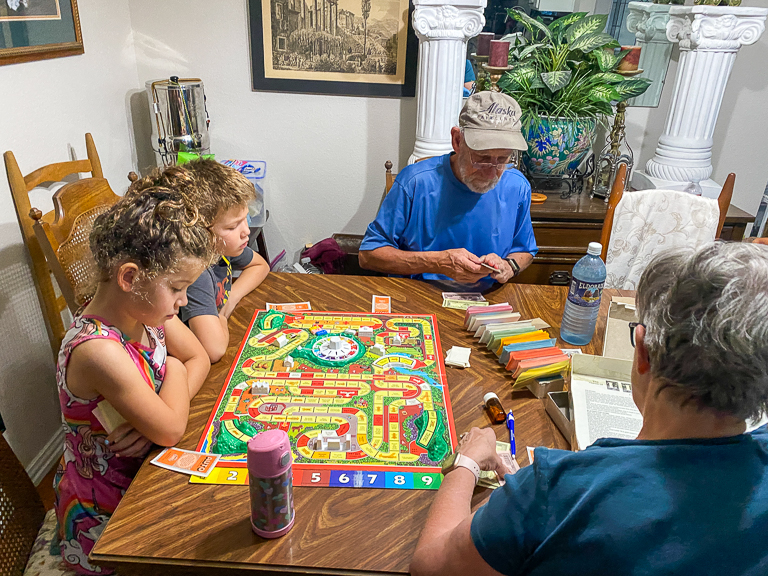 And then somehow worked a late game in, which pushed out their bedtime. Alli was doing great, and was very lucky around the board. 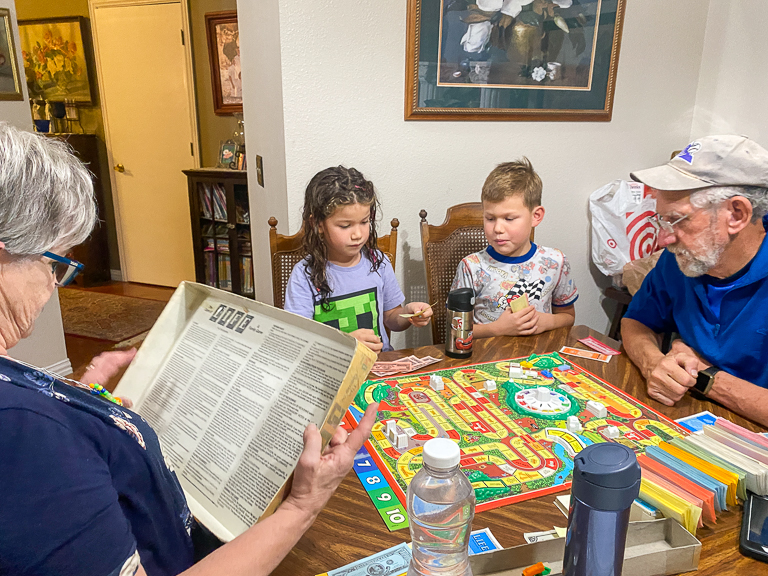 Well with this version of Life, if you get to the end and know that you don't have enough money, you get to risk it all on a single number. If you hit it, the game is over and you automatically win!
You know, something when you're playing the Game of Life, you have kids. You can name those kids anything you want. Silly names, funny names. Whatever. Names like Lucky and Charms. Or Sparkle and Spike. Or Swoop. Or maybe you're like Pop Pop and name them something that will get a laugh out of the kids any time they hear it.
Despite having 2 weeks, it seemed like we were always busy. We were able to tag up with Theresa's cousin and the rest of his family. 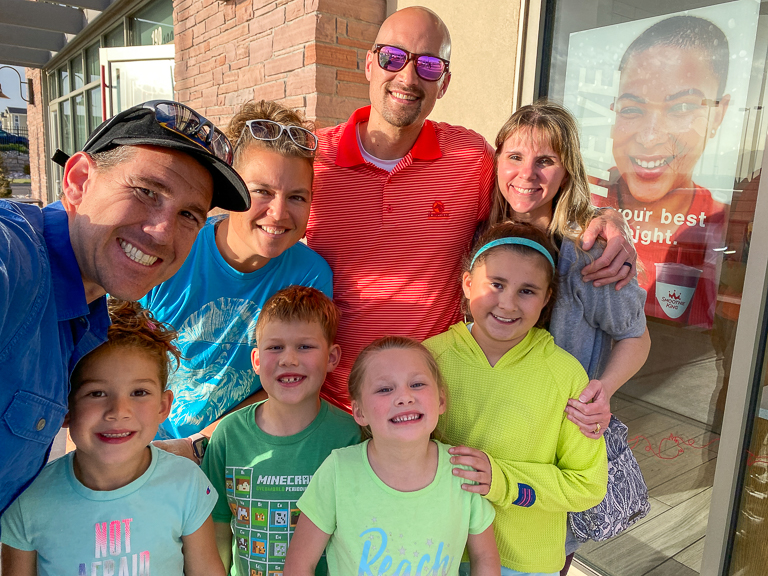 The kids all squeezing together for a big hug. 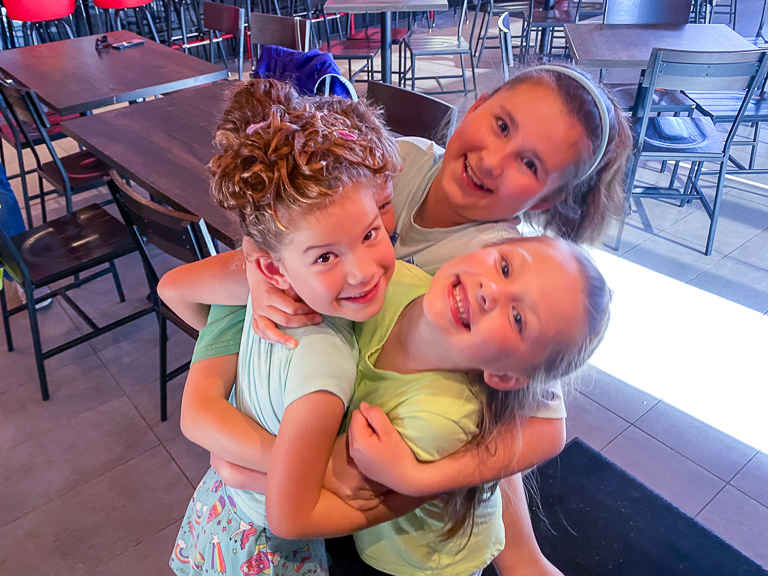 We all met up at a new taco place called Torchy's. Their Hillbilly Queso & Chips was quite tasty. 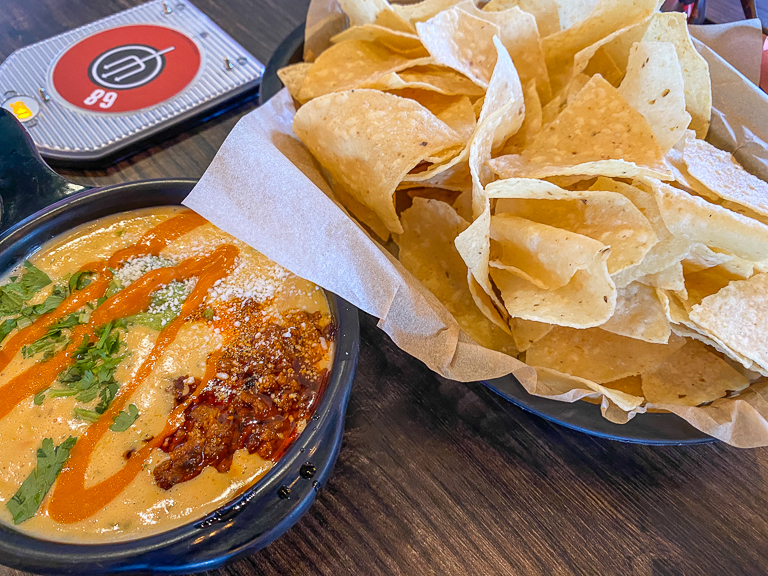 The tacos though left a bit to be desired. First was the price. ~$5 for a single taco stung. You'd need 2-3 for a meal. And then the second disappointment was that the tacos weren't hot! It was a room temperature chicken strip with room temperature cheese that didn't even melt. The flavors were good, but I was not particularly impressed. 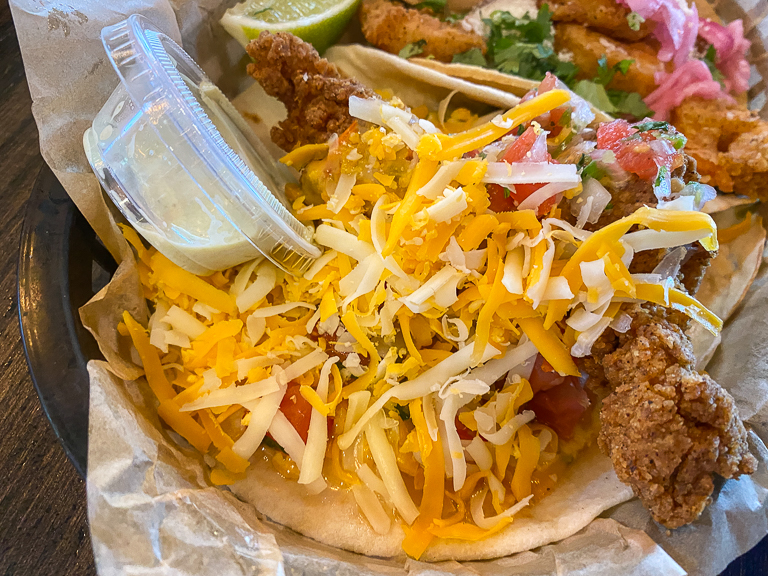 For dessert we stopped right next door at the Smoothie King to chat and catch up. We've been missing our smoothies. It was good to see them. 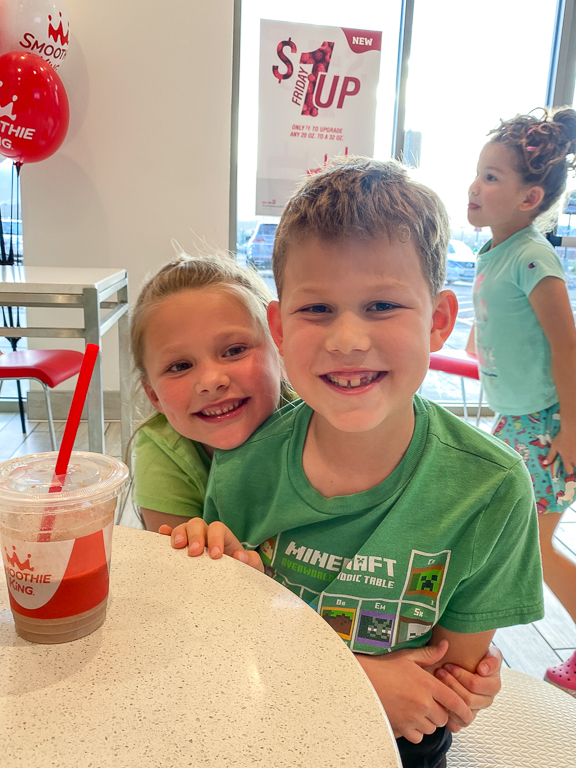 Our night with them ended early, and so Pat and Megan invited us over for a game night. 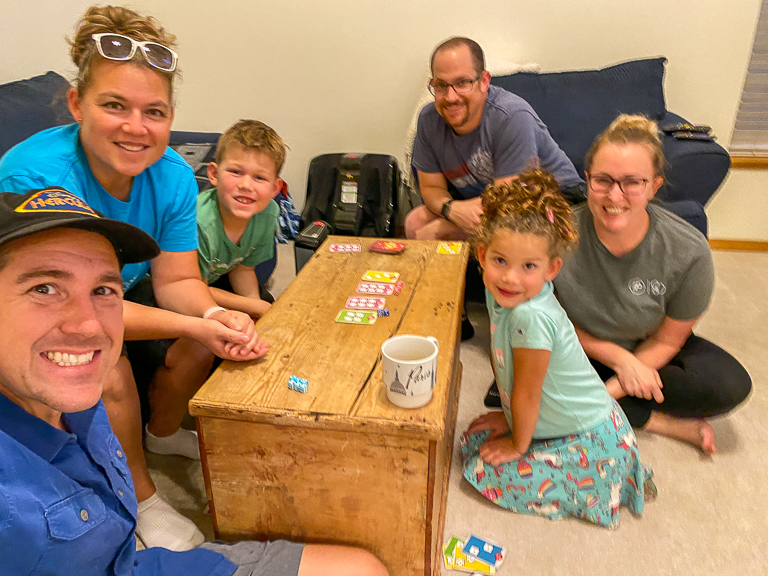 Yes Alli. That pink die does match your pink fingernail. 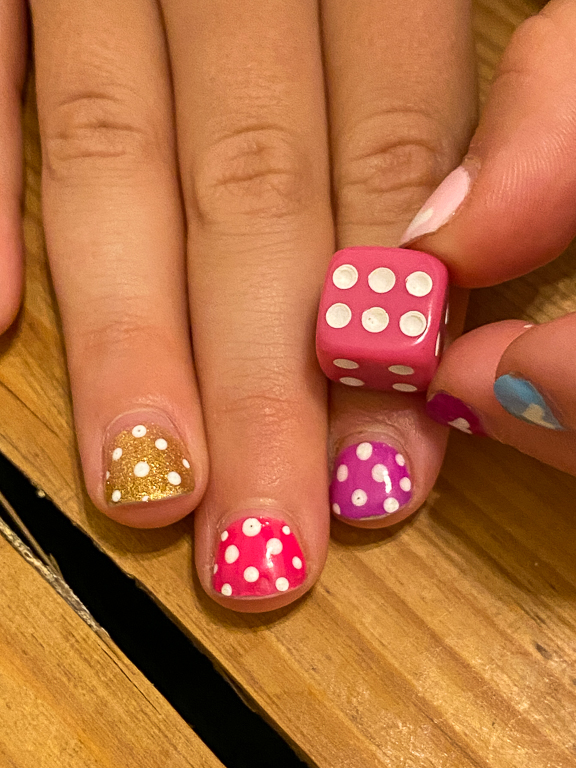 One of the things that's always been on my mind and on the backburner was digitizing my mom's entire collection of photos. Growing up, she was always taking pictures. It's probably where I get it from.
Anyway, there are so many photos just in a box that needed to be scanned into a computer. My sister-in-law Megan and I were in a competition, and fortunately I won! My reward was her help/time getting all these photos scanned. I bought a top feed scanner (so much better than a flatbed scanner), and I pulled photos out of the albums, while she scanned them, then I put them back in.
I didn't know how much time I was really getting. There were so many photos! After multiple hours, covering multiple nights, we had scanned 10911 different files. And Megan was a trooper through it all. It was fun going back and seeing photos from my parents in their teens, growing up, having kids, and seeing old memories in photos again. 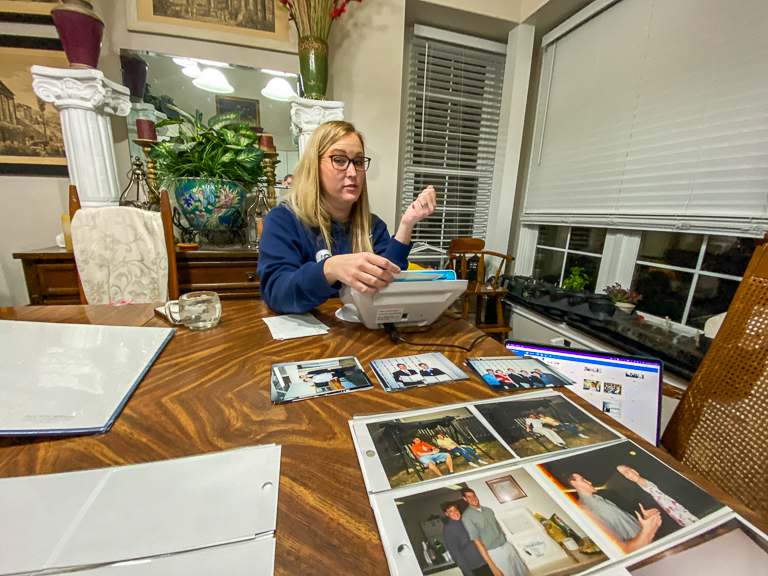 Gram volunteers at the library, and the kids and I decided to bring her lunch. 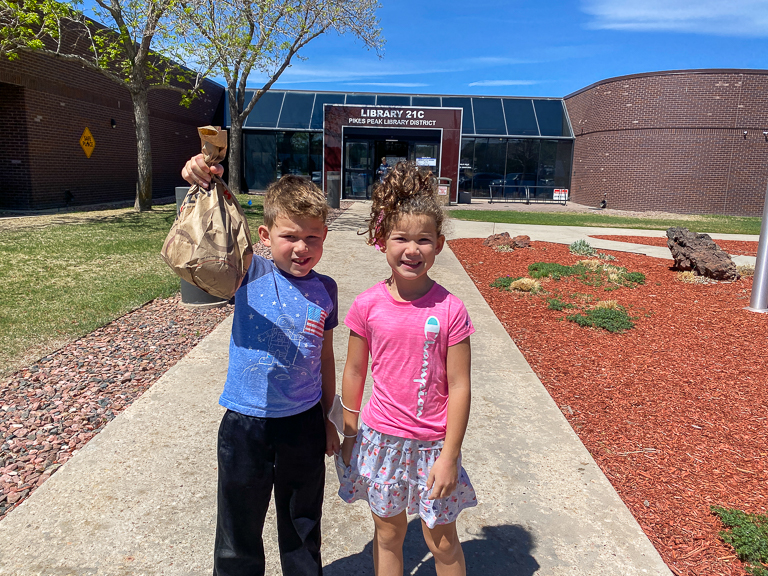 Good to see you Gram! 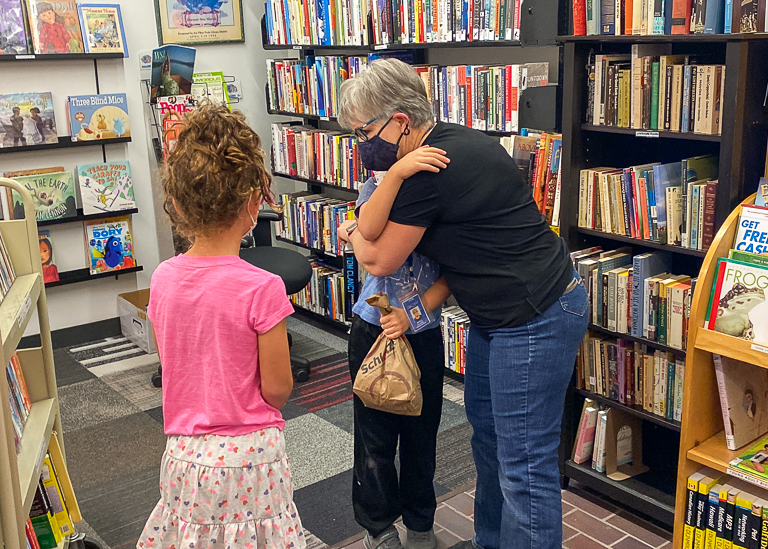 Pop Pop heard how much the kids enjoyed fishing in Michigan and told them there was also fishing here in Colorado too. There's a local lake that was recently stocked, so hopefully they can pull something out of it. Ian and Alli spent 3 hours there fishing with Pop Pop. 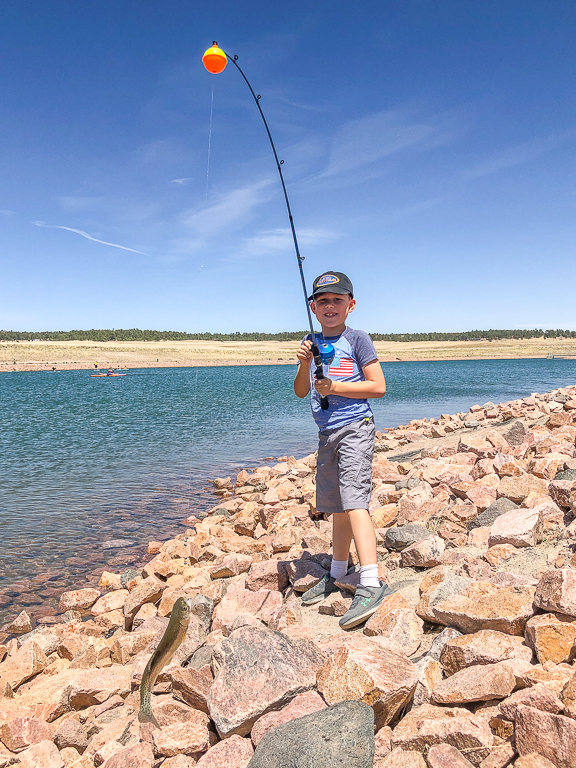 And in the end, came away with two fish. He's a little bit happier to have caught them than I was around that same age. The story I remember is that after we caught them and was supposed to pose with them, I was expecting them to be dead. When I went to pick them up, one of their mouths flopped open and it freaked me out.
There's lots more to share, which will come in future posts. 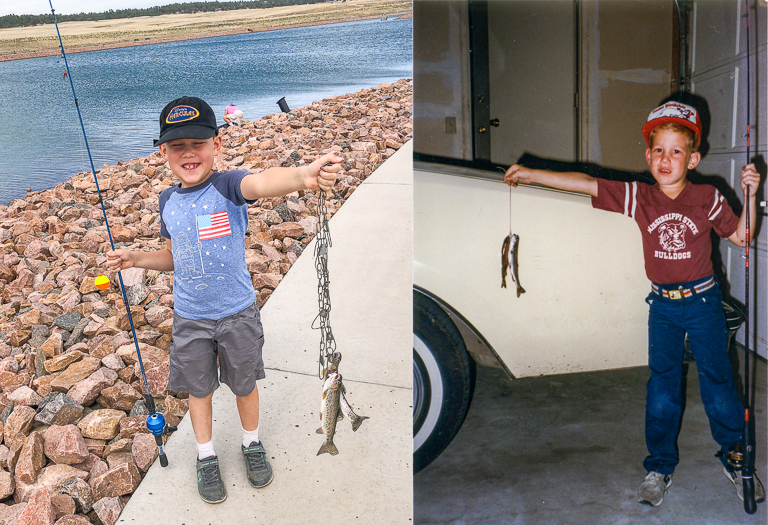