<I'm a bit behind on posting. Trying to play catch-up!>

We're in Colorado, having returned from a weeklong trip to Michigan. When Theresa's Emo (Korean Aunt - Mom's Sister) heard we were in town, she was quick to bring us dinner! 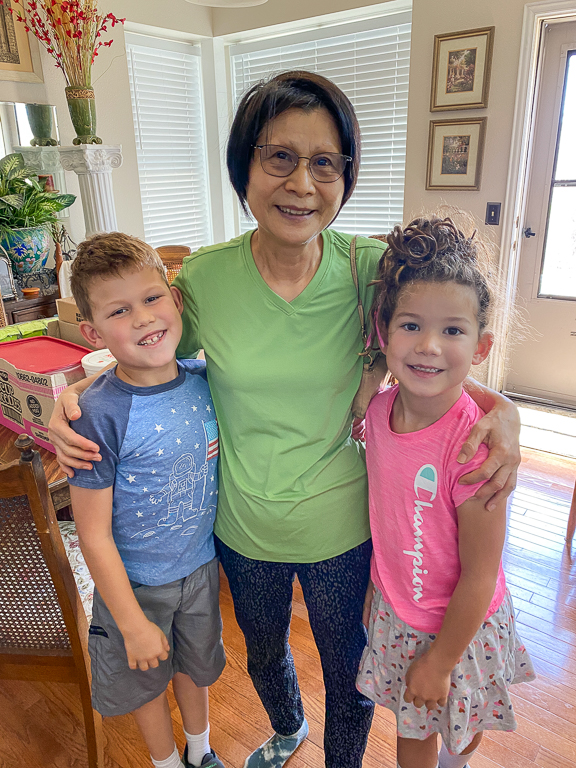 Emo is always so thoughtful and generous, and always makes so much food! 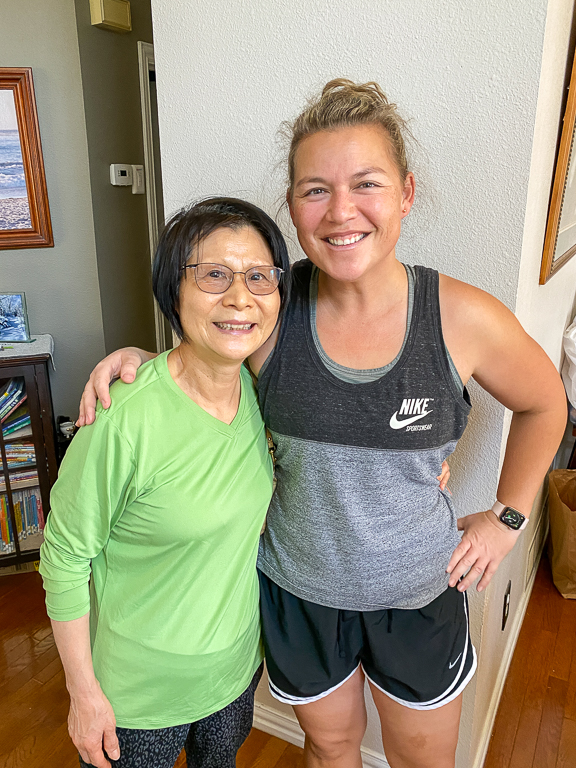 There was food for lunch. 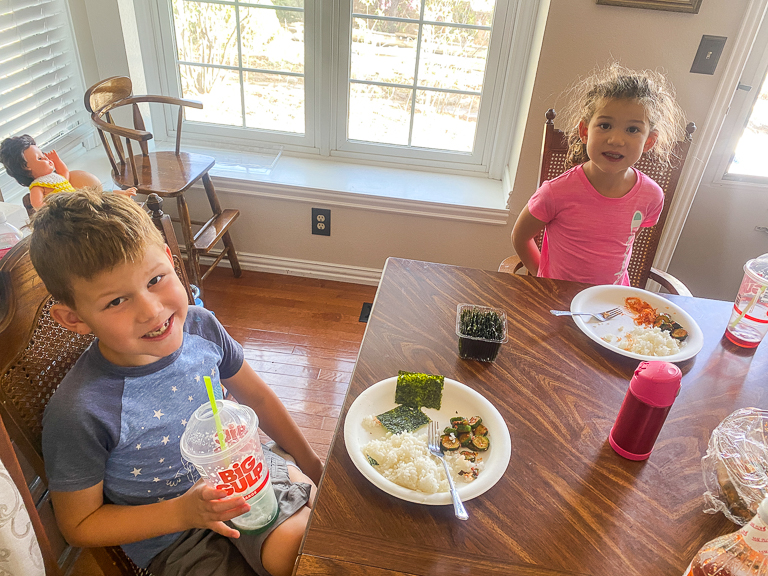 And more than enough wontons, beef bulgolgi, rice, soup, kimchi, seaweed, noodles, and other veggies to have dinner and many more meals after that. No one was hungry after that. 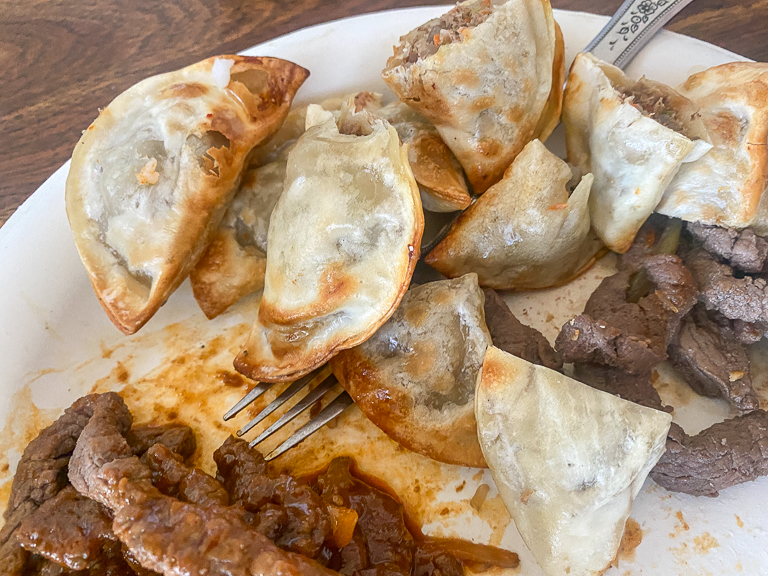 I think a walk over to the Merry-Go-Round park is in order. 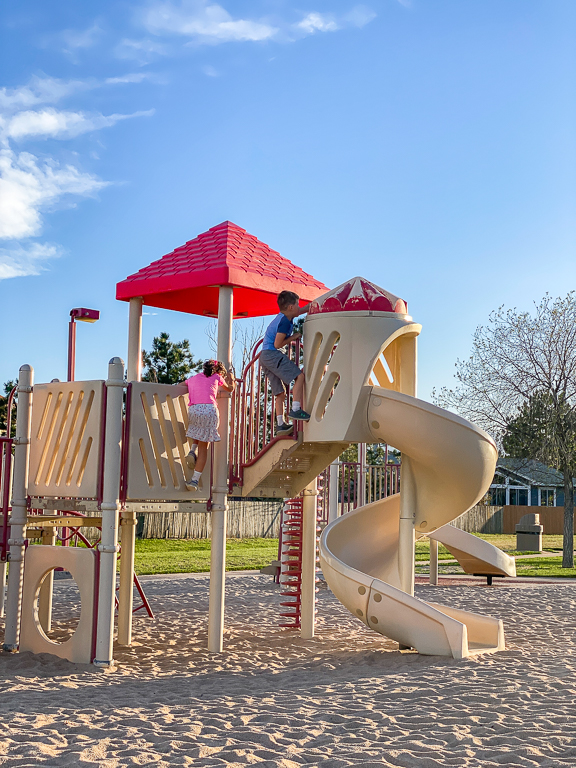 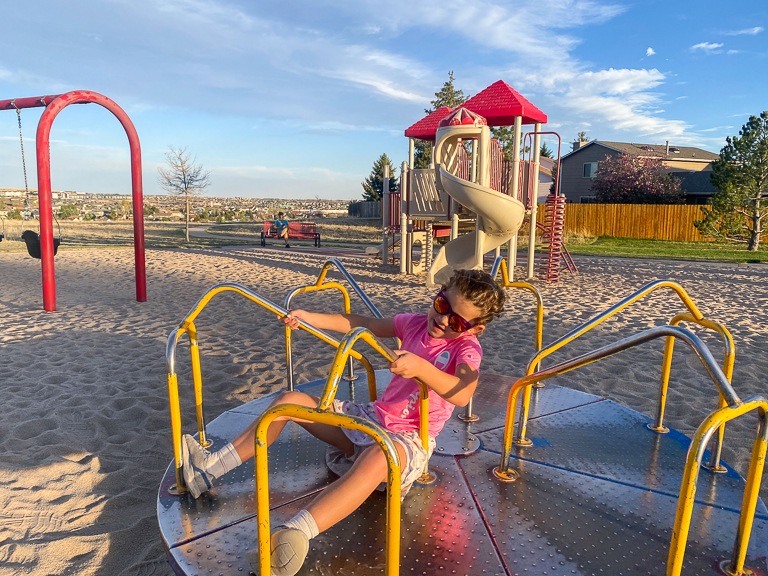 Then I schooled Ian in how to jump out of a swing. I like the swings here with the thick chain links. I don't feel like they'll break like some cheaper chain links might. 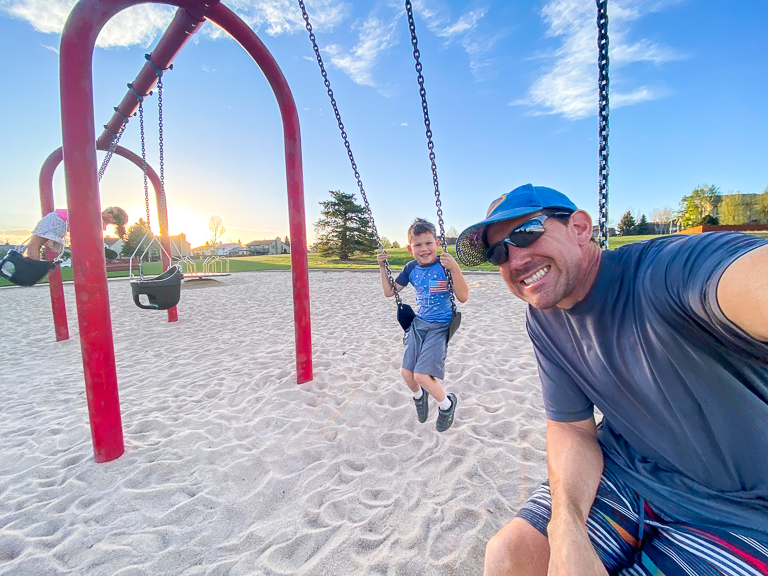 Theresa and Alli getting their workouts on. Gotta build some muscles. 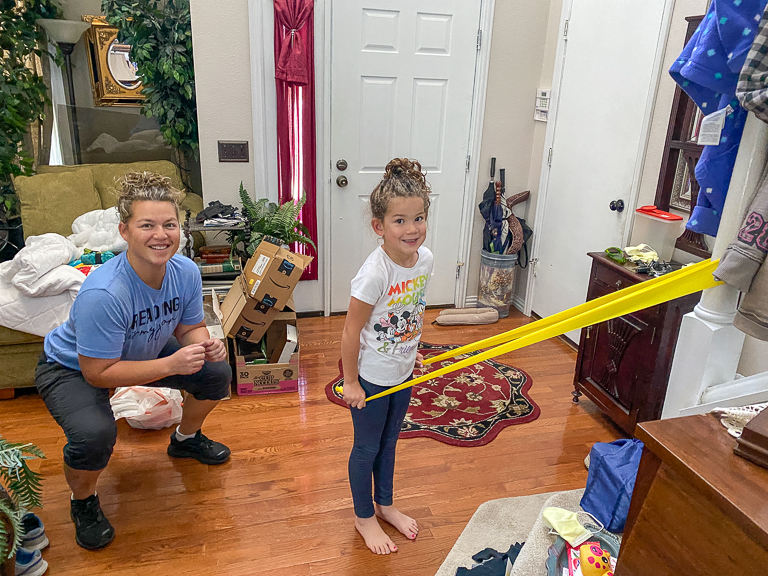 And here I go contributing to gaining weight. 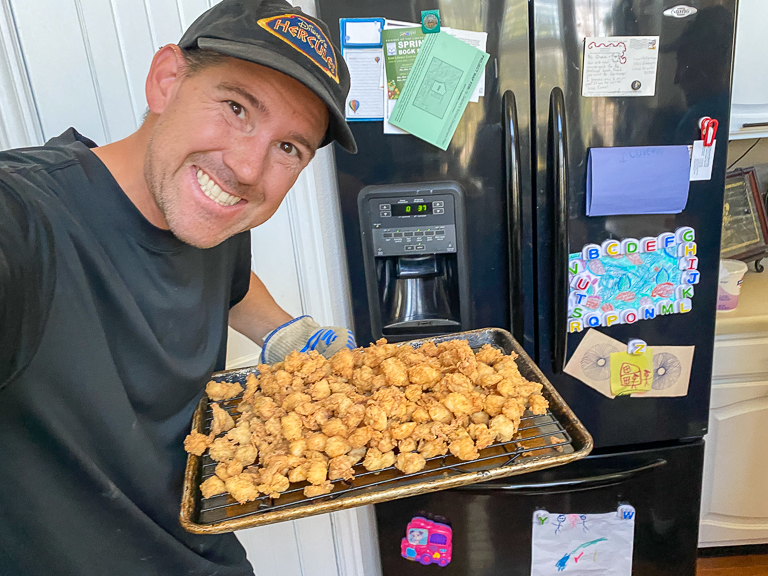 It's difficult to resist Grammy's chicken nugget recipe. And with this many it's almost all you can eat. Almost. 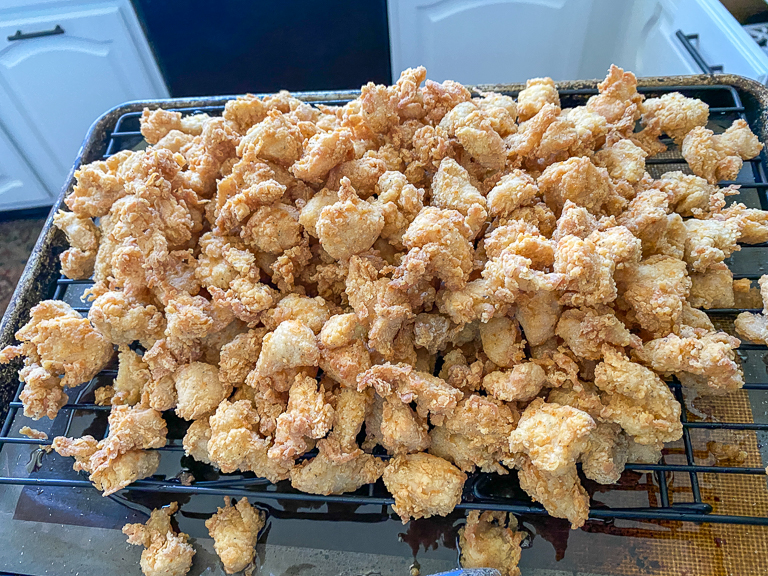 We had a quick dinner because we were all rushing to see Avery perform in her school's music recital. We've got a waver! 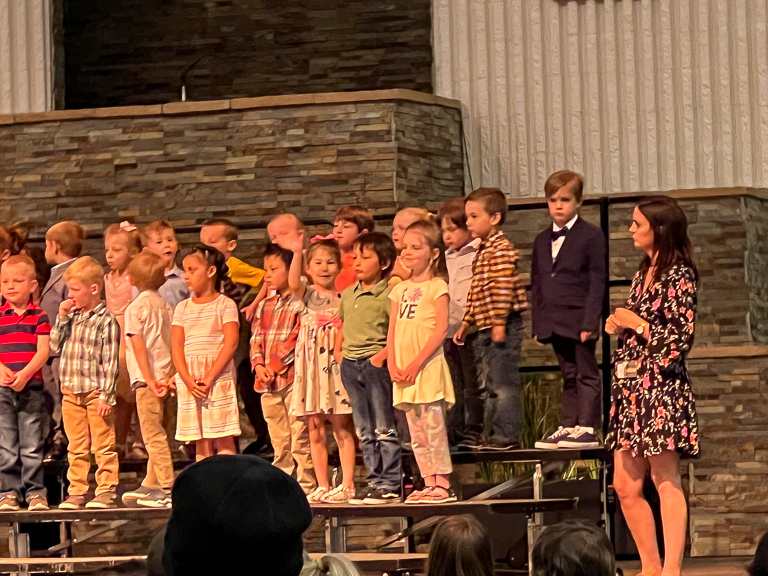 The kids praised her for doing such a good job. 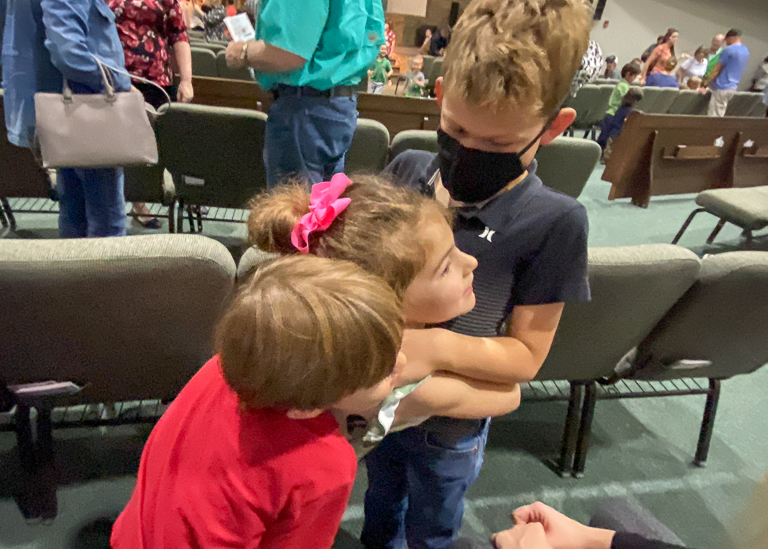 Ian - That was Mind Blowing!
Avery - Did I do a good job Ian?
Ian - It was SOOOO GOOOOD! SOOO GOOOD!
Now that that watercolor puzzle is gone, we can start working on a new one. This puzzle based on movies was a great one! While working on it, you could see a piece with a character and swear you've never seen that despite having looked at the box dozens of times over the last hour.
There was one piece I just couldn't find, despite all my searching. It's a pretty obvious piece. It's The One Ring from the Lord of the Rings. 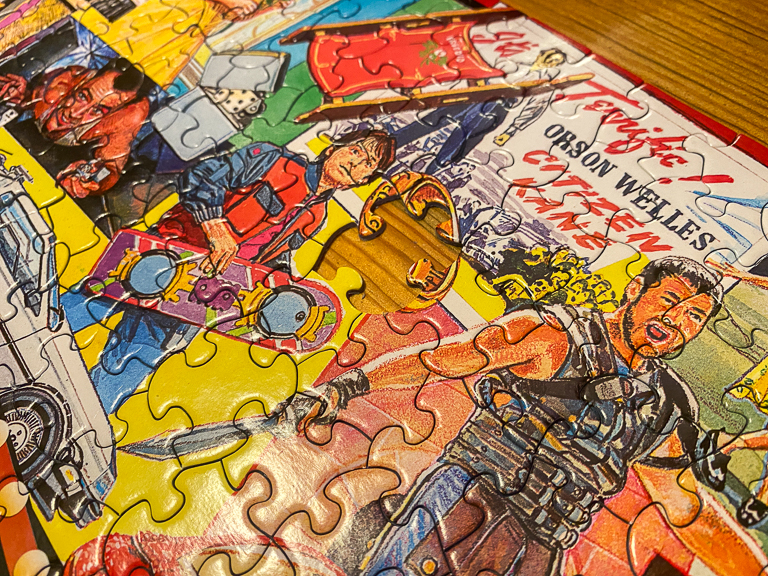 Imagine my surprise when we got all the pieces completed except the one and Theresa told me that my brother had put it in his pocket before he left.
He is a super Lord of the Rings fan, and I guess the power of the One Ring was too much for him. It called to him to take it.

He brought it back the next day. Done! 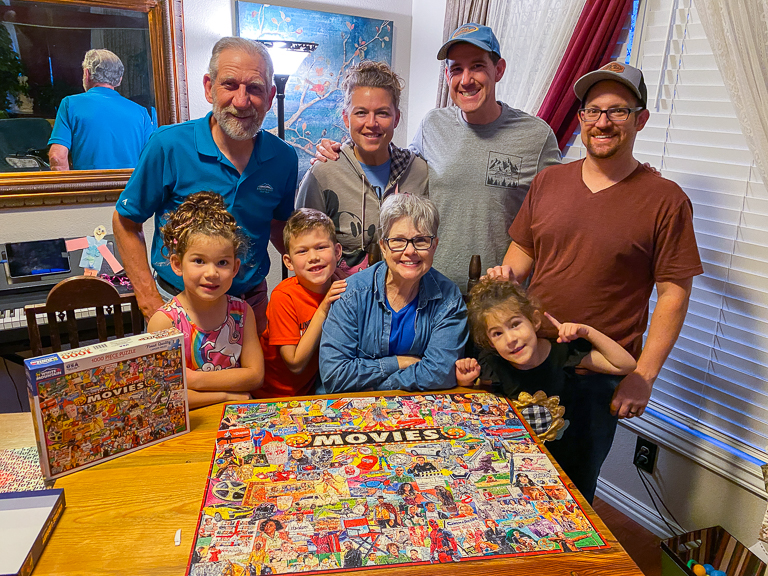 And then another puzzle completed too. It's tradition to wait until everyone who has worked on it arrives to then take a picture and then tear it apart. 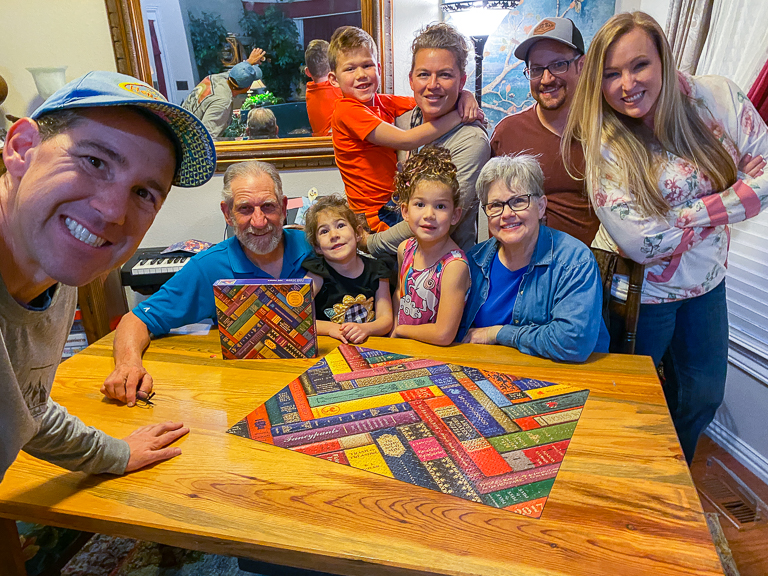 Some puzzles are manufactured really well and the pieces are nice and tight! 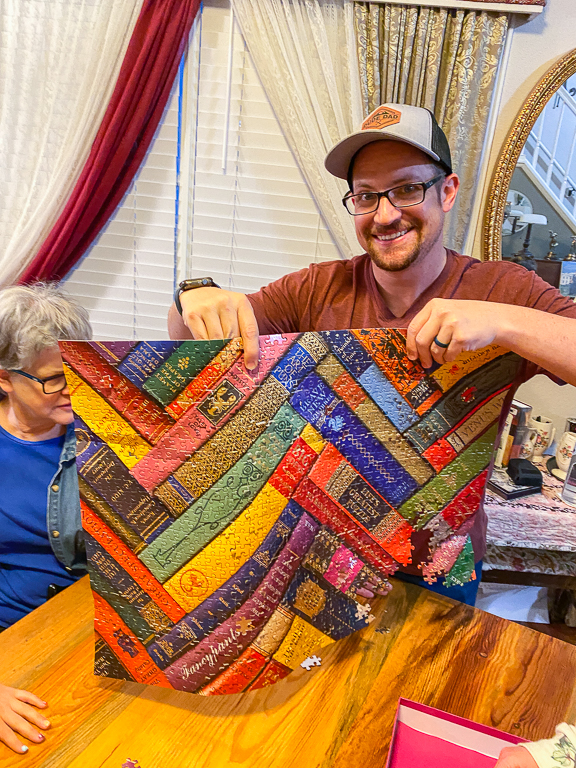 To earn our stay, Theresa and I like to take over dinners. We've asked many people what they'd like us to make. Megan remembered when we made Molasses Bread and Loaded Potato Soup and really wanted that. I was in charge of the molasses bread. She helped by scoring the top with a razor, carving an "M" in one to designate it as hers. 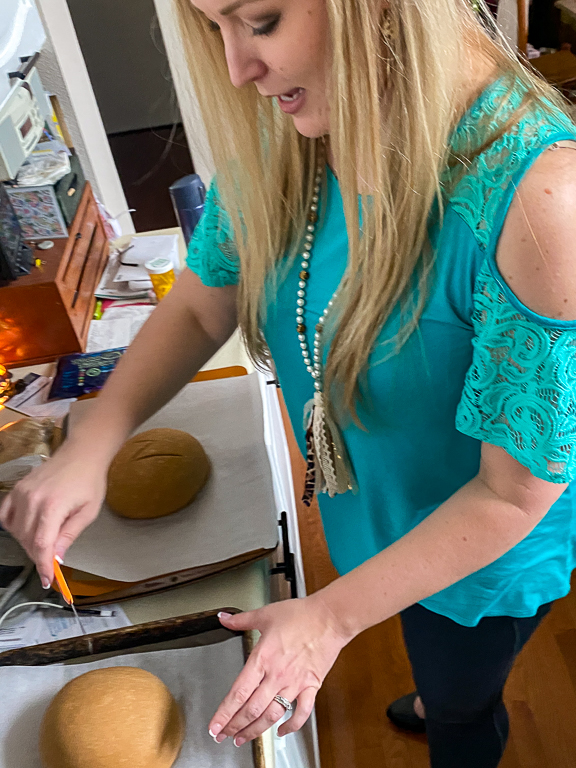 I didn't have to raid my oatmeal packets this time. My mother had quick oats available in the pantry. 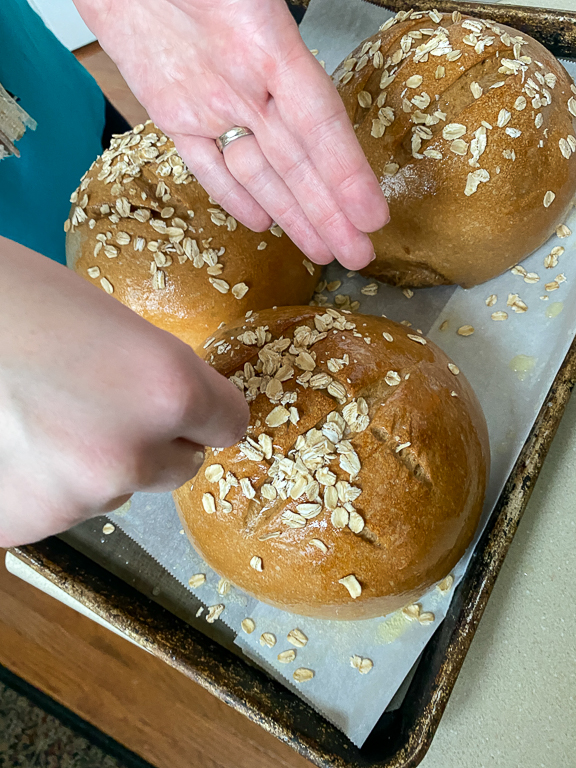 They puffed up perfectly and smelled divine. 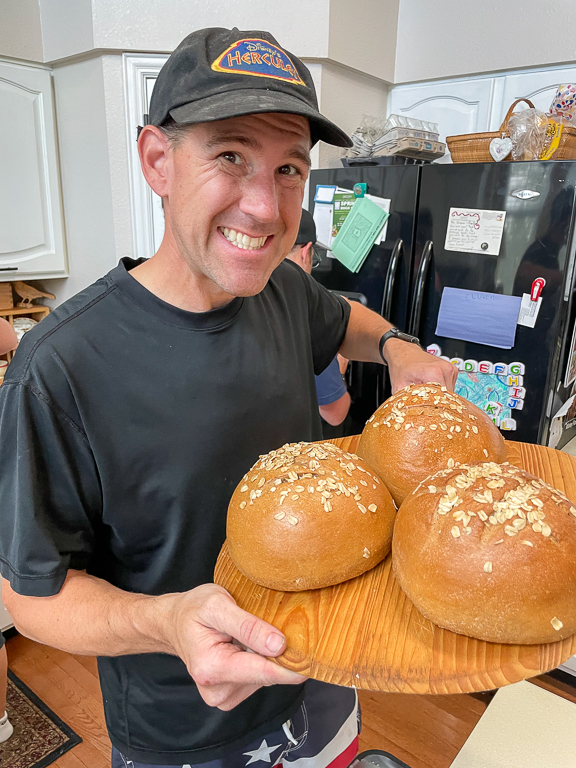 Theresa took care of the soup. I think I could get just a little more in that bowl, don't you? 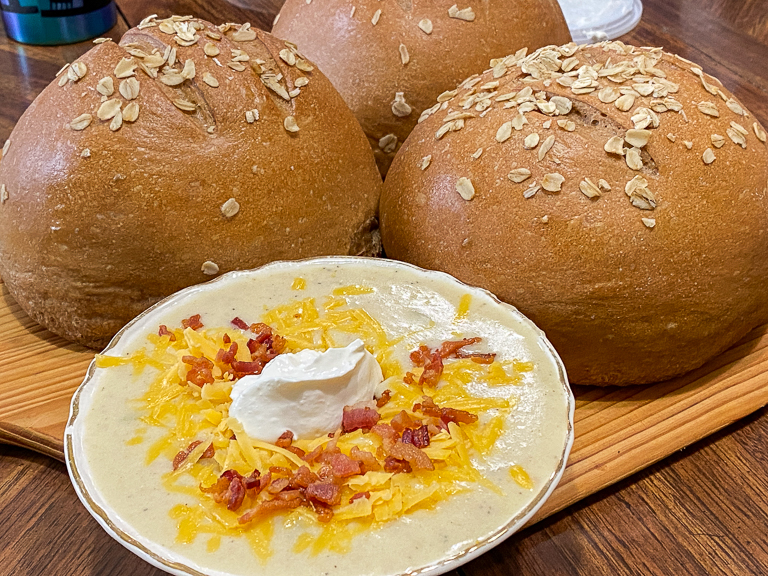 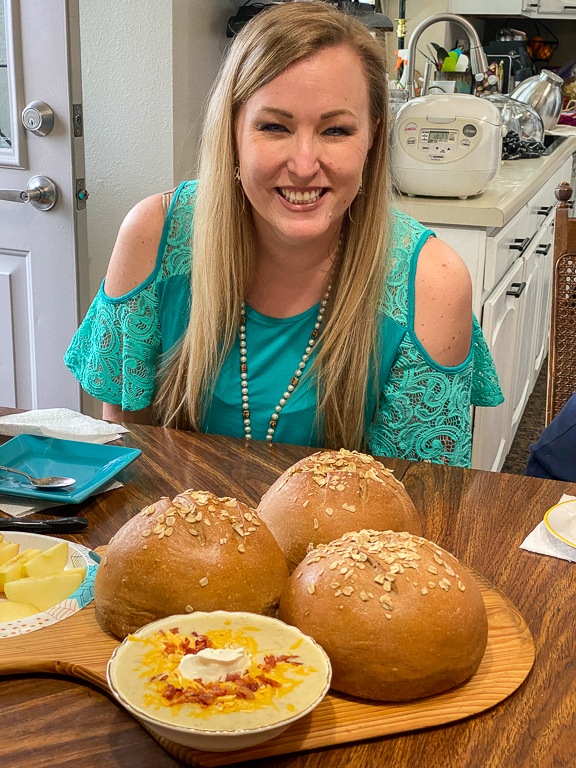 It was a very tasty meal. And somehow the extra loaf of bread disappeared, but would later reappear at Megan's house. 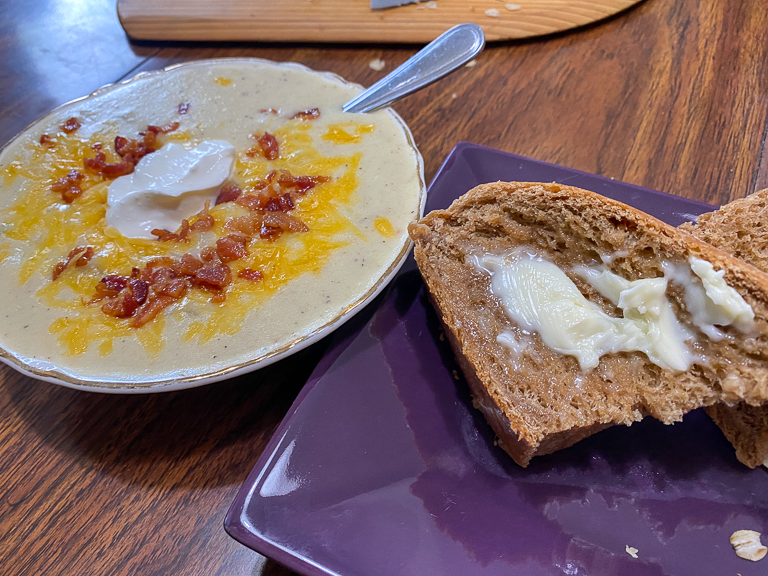 I make some pretty delicious biscuits too. 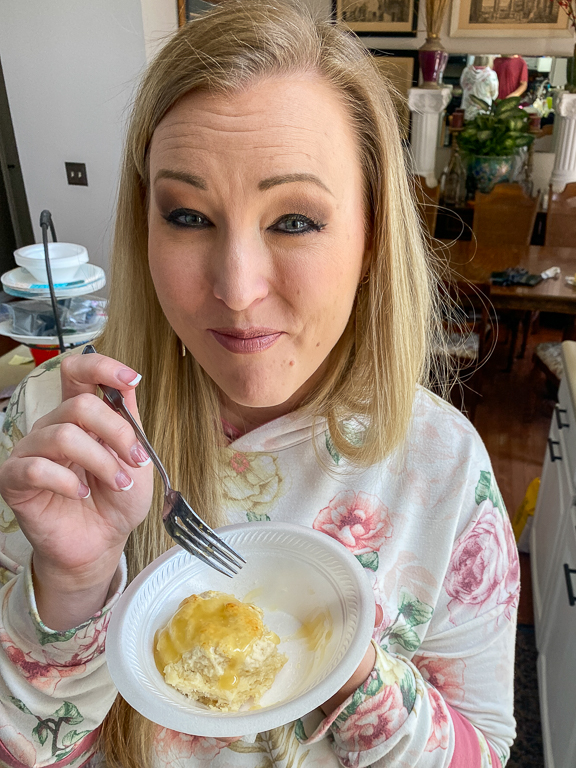 And there's always a taste test going on. Here, Patrick is trying the Sour Patch Kids Snack Packs that we tried with the rest of the family in Mississippi. He felt largely the same as we did. The Redberry is the best, but both could use some chewy Sour Patch Kids bits in them.
I think we did over a dozen taste tests while we were there in Colorado, but I'll save those and sprinkle them in between posts about our travels out West.
More to come soon! 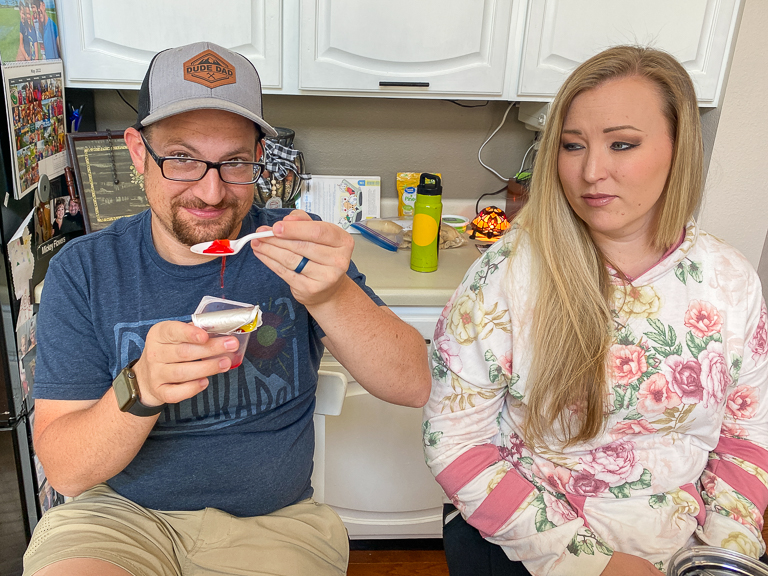