It's been a chilly few days here in Florida. Theresa said that for dinner we should have soup.
Theresa - Which soup would you like?
Joe - Any soup is good.
Theresa - No, really, pick any soup and I'll make it for you.
Joe - Well I really like those creamy potato soups. Like the Loaded Baked Potato one from Stuart Anderson's Black Angus.
Theresa - Okay! I can make that. We should have something to go with it.
Joe - I can make bread!
Theresa - Yes! Make their Molasses Bread! I can't believe we haven't made that one yet! 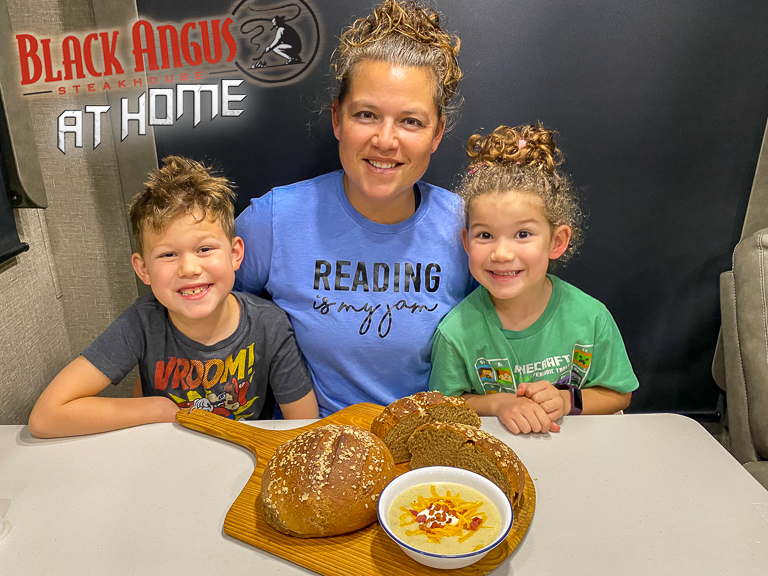 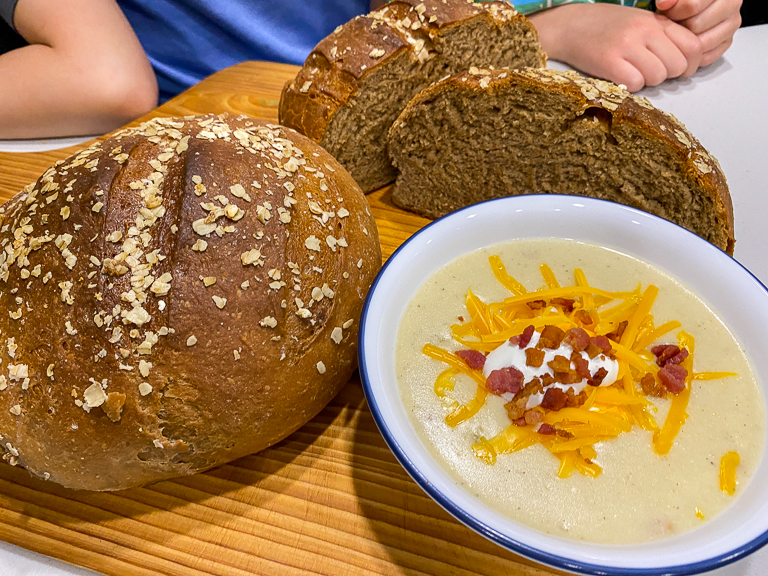 For myself, I'll be following along with the recipe from HouseOfNashEats.com for their Sweet Molasses Brown Bread. It starts with yeast, salt, honey, molasses, oil, and cocoa powder (for color I'm assuming). 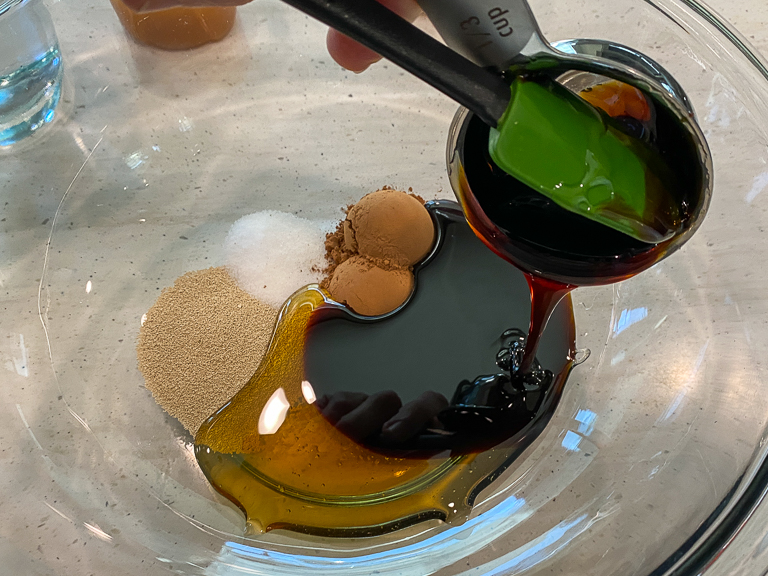 Then it's time to add the flour. I should have read the ingredients a little better ahead of time and made a half-batch. There will be 7 cups of flour in total making 4 large loaves of bread! I didn't have the whole wheat flour or bread flour on hand, so AP flour will have to do. 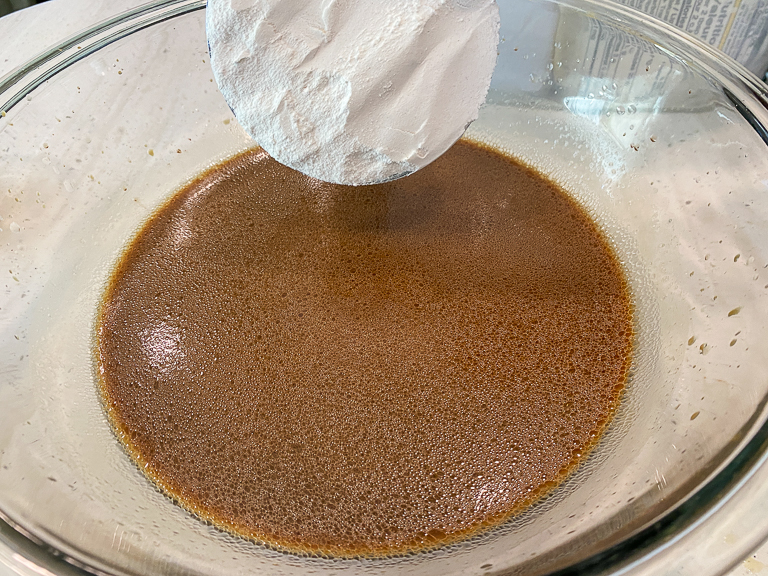 And instead of having a stand mixer, I'm going to have to go at this by hand. 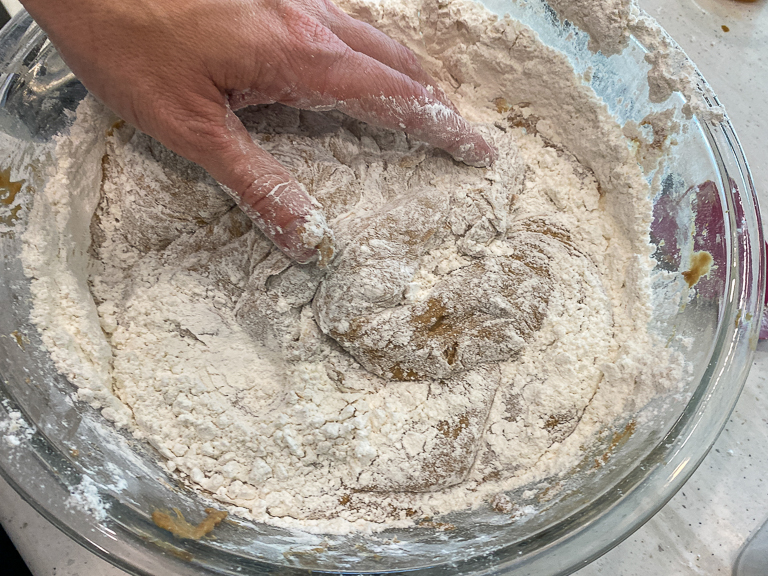 It's a very sticky dough. This was a little too sticky. I ended up adding a bit more flour. 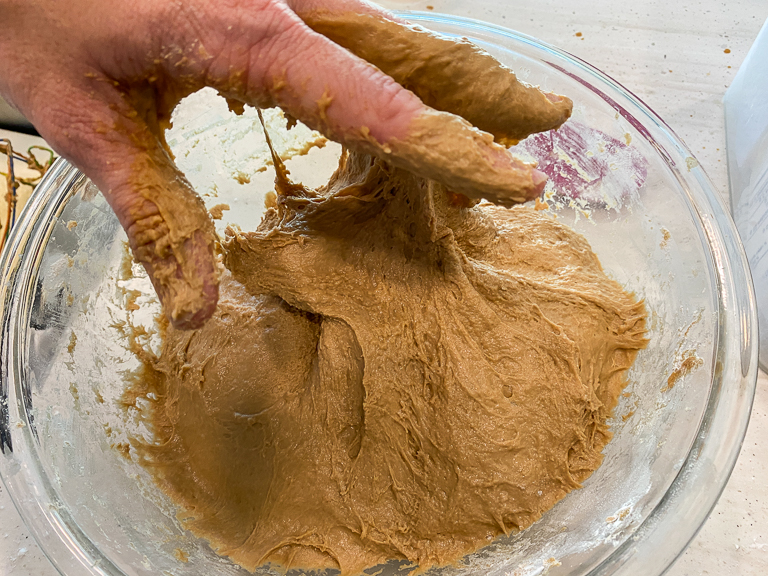 Being so cold outside, the truck is not a good option for proofing the dough. Luckily my oven has a "proof" setting for dough. The yeast got warm and happy and made lots of air bubbles. 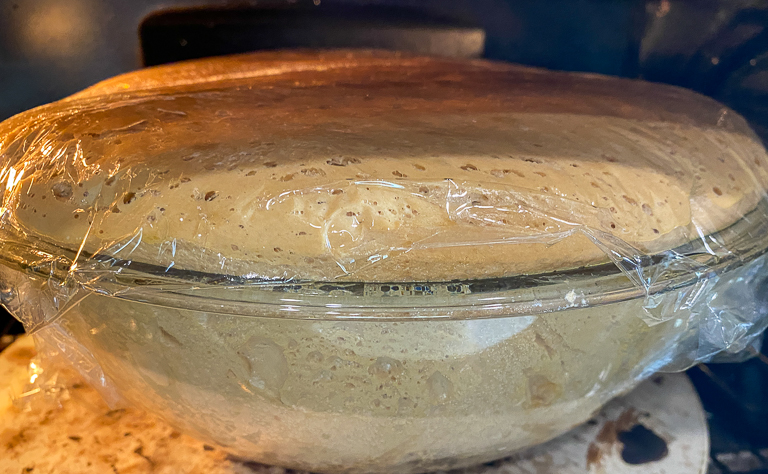 I punched down the dough and made two round loaves to rise for their second proof. The rest of the dough went into the freezer. We'll have to see if the frozen dough will rise or not.

After 30 minutes, these loaves are looking beautiful! 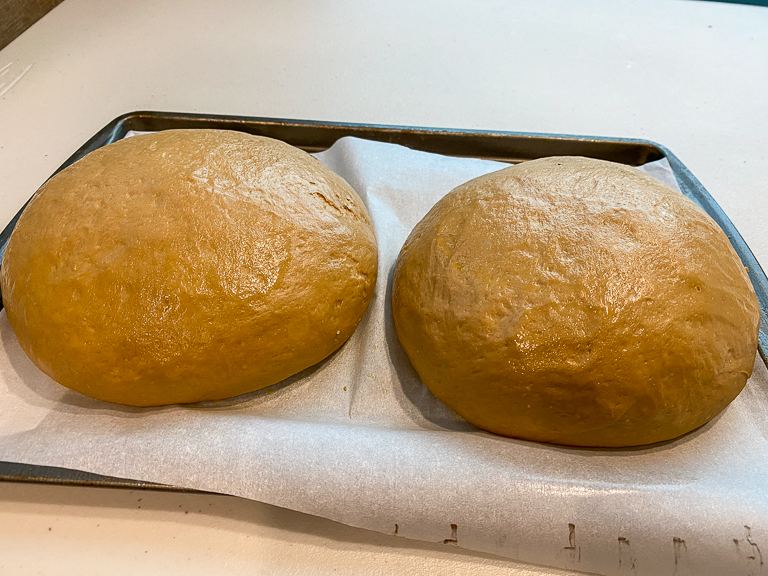 I used a razor to score the top of the loaves, then it was back into the oven at 375F for 25 minutes. 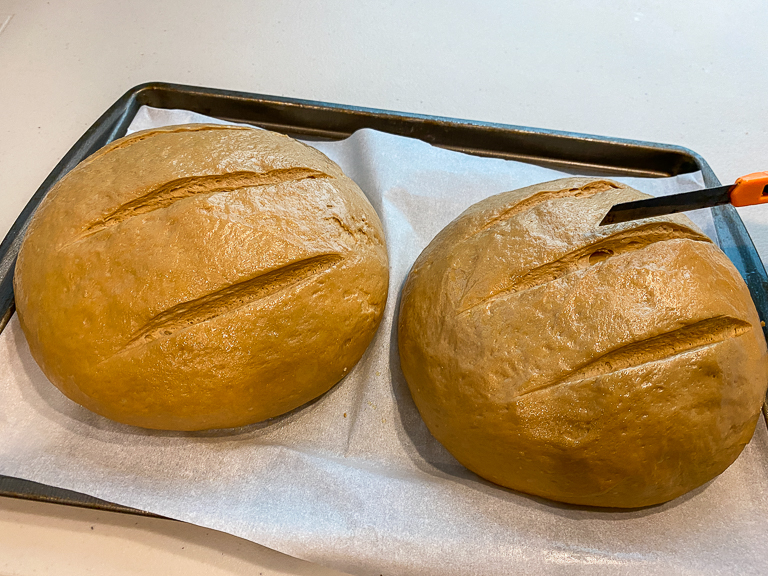 They're almost done, but not quite. There's one more thing the Stuart Anderson's molasses loaves have on top of them. Rolled oats! 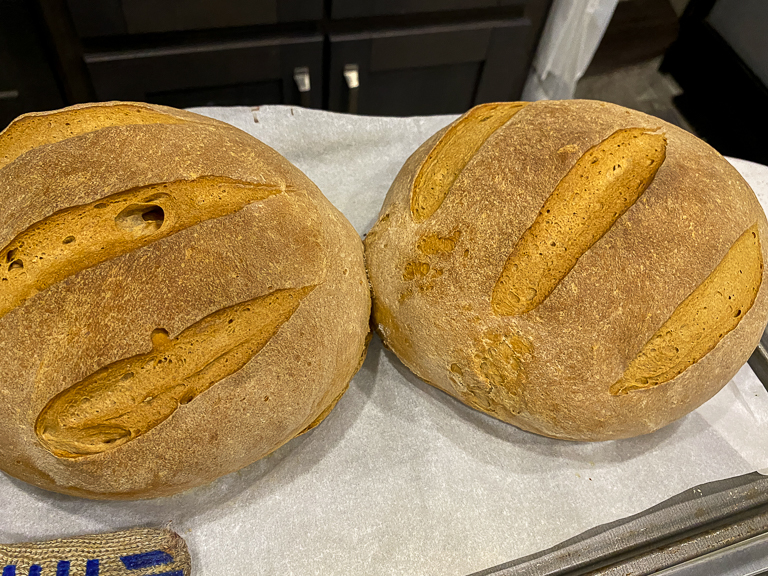 I don't have a whole container of oatmeal, and I don't plan on buying one just for this. What I do have is a package of instant oatmeal. I sifted out the brown sugar and salt until I was left with just the oats. 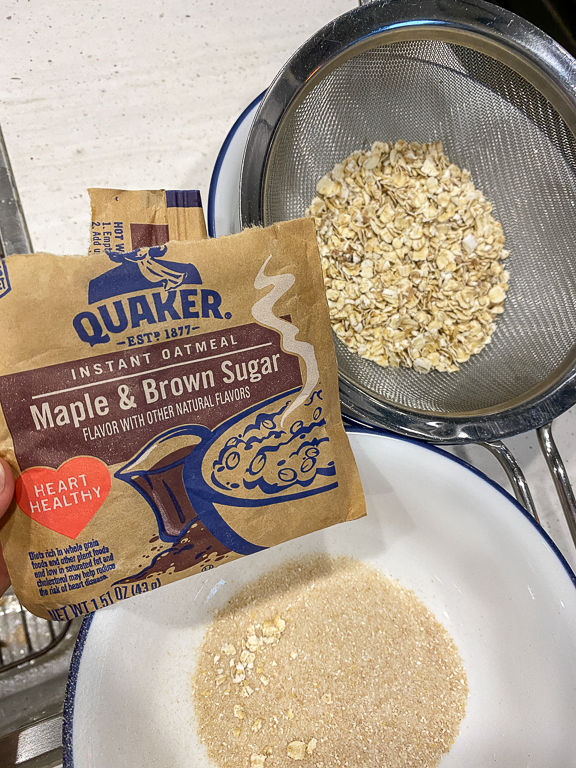 After brushing the loaves with melted butter, I then sprinkled the oats on top. 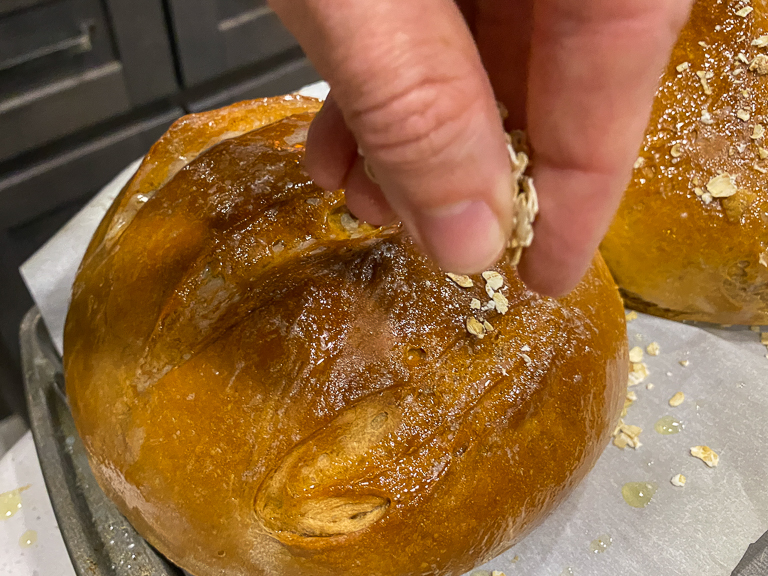 After 5 more minutes in the oven, they came out looking and smelling beautifully. 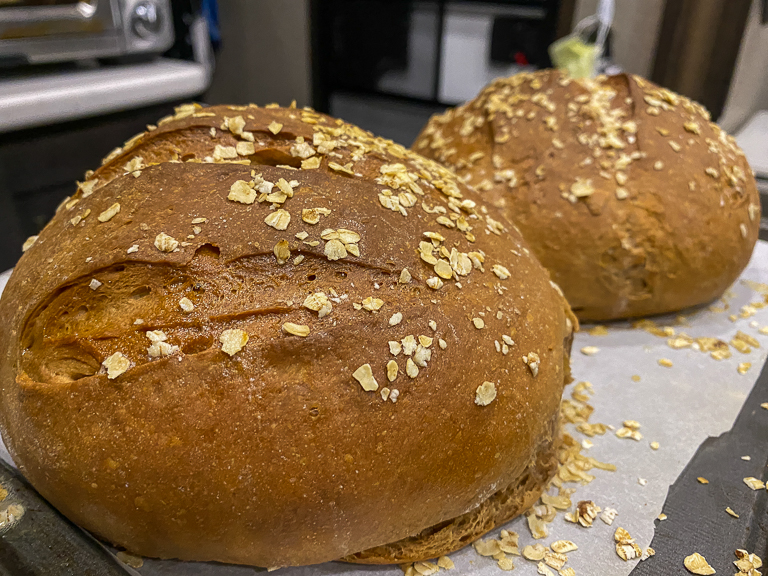 We waited a couple minutes, but not too long before cutting into them. The bread was still steaming as I cut into it. 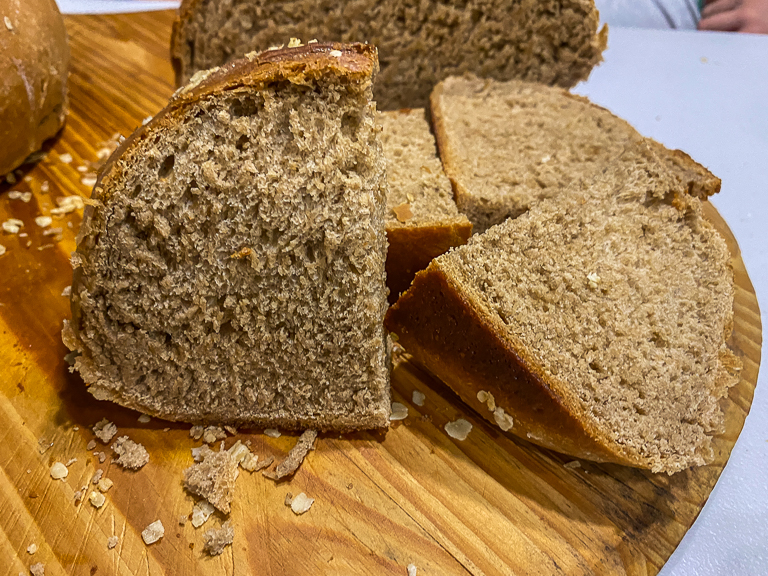 Theresa has been working on the Baked Potato Soup, but she doesn't take nearly the number of photos that I do. She will be following SugarSpunRun.com and their recipe for The Ultimate Creamy Potato Soup.
She crisped up pieces of bacon, cooked onions and garlic in the bacon fat and butter, then mixed in flour to thicken it. Next potatoes, chicken broth, milk, cream, and spices went into the pot. After boiling, she took half of the soup out and used the immersion blender to puree everything in the pot until smooth. 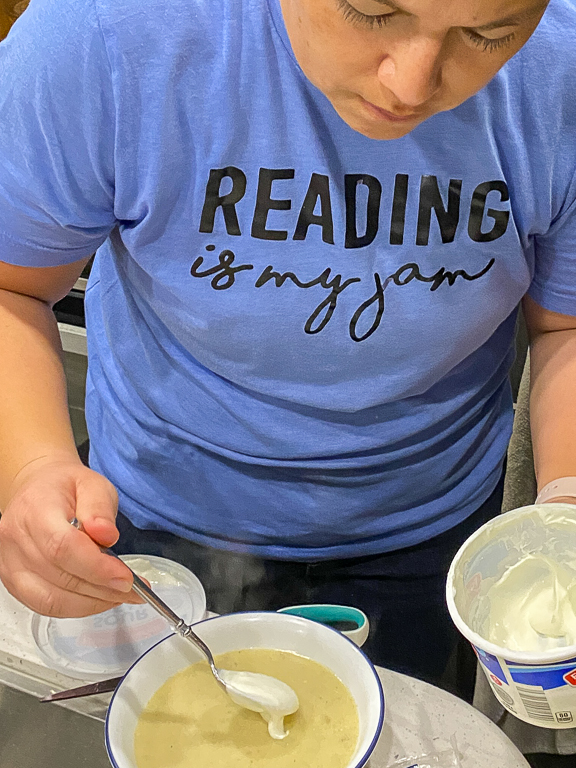 After simmer a little longer, each bowl was served, then topped with sour cream, cheddar, and bacon pieces. Honestly we looked for the green onion too, but the store was out of them. They would have added a nice color, but I actually ask for them to be left off my soup when I eat at the restaurant. 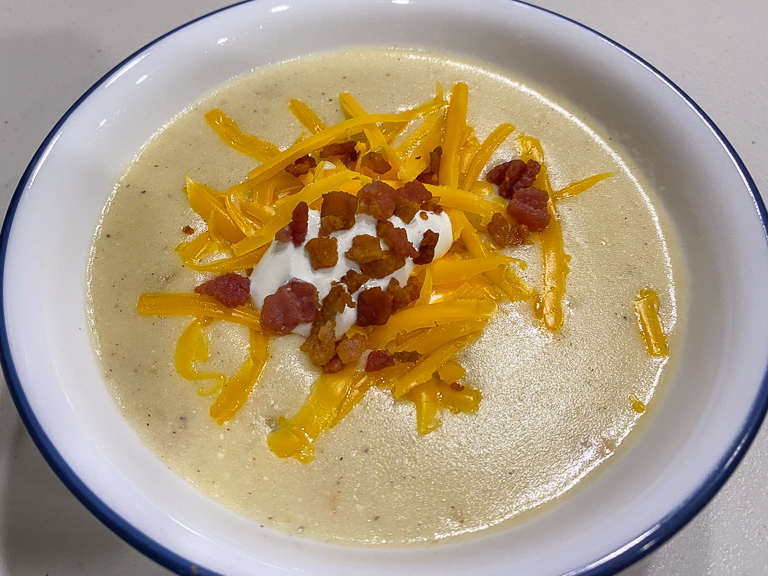 The bread was so good. Especially when slathered with creamy butter. I think Stuart Anderson's bread is a little bit sweeter than ours, but that's okay. Ours is hot and delicious! 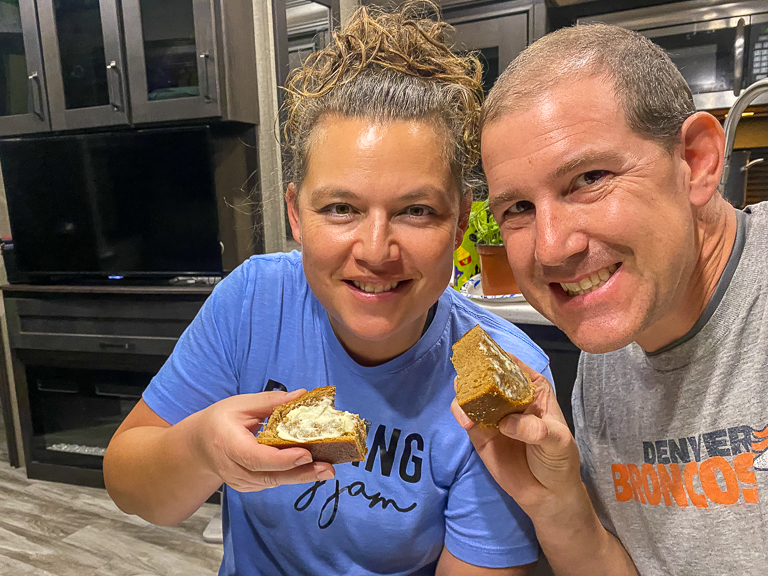 But did the kids like it?
Ian - This is a great meal! Normally we make good food, but this is really good food!
Alli loves the bread and kept wanting more and more.
Ian said he has a new favorite soup. When can we have this again?
I'd say that's a definite success! We will have to make this again! 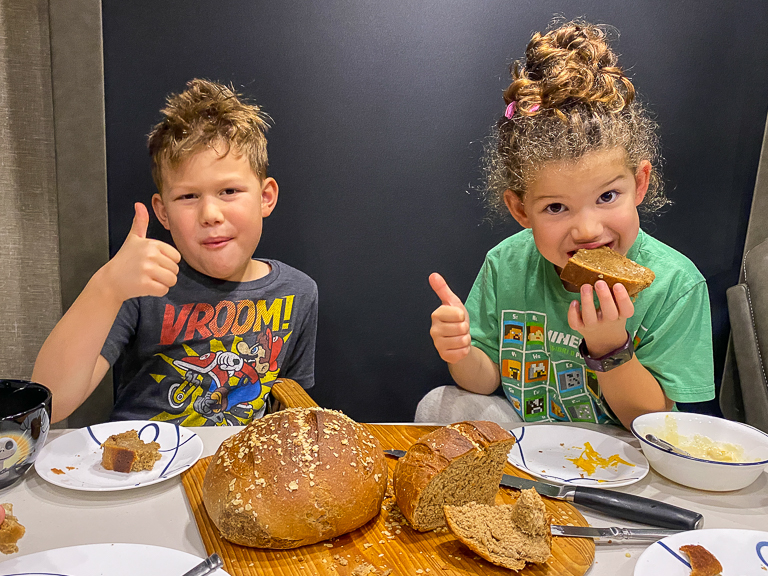