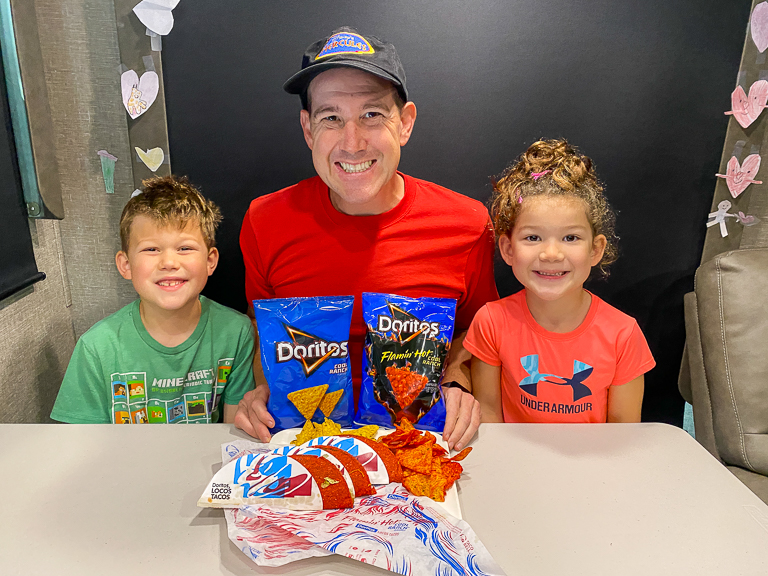 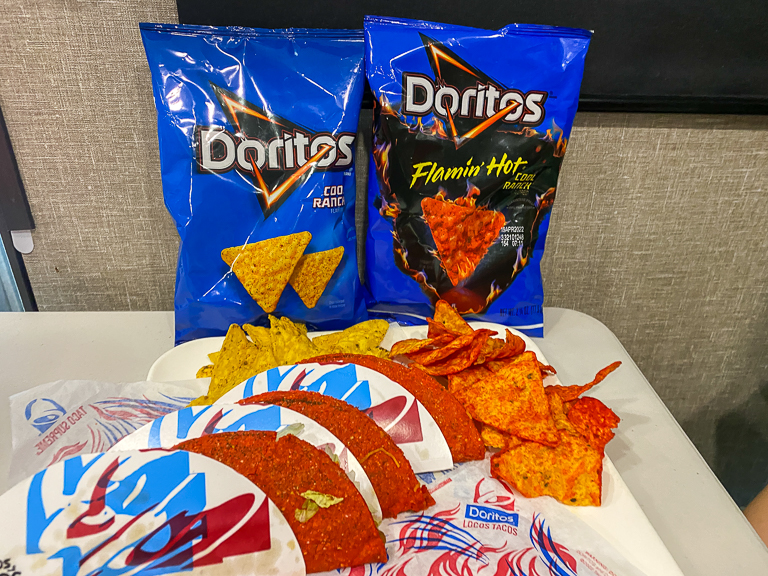 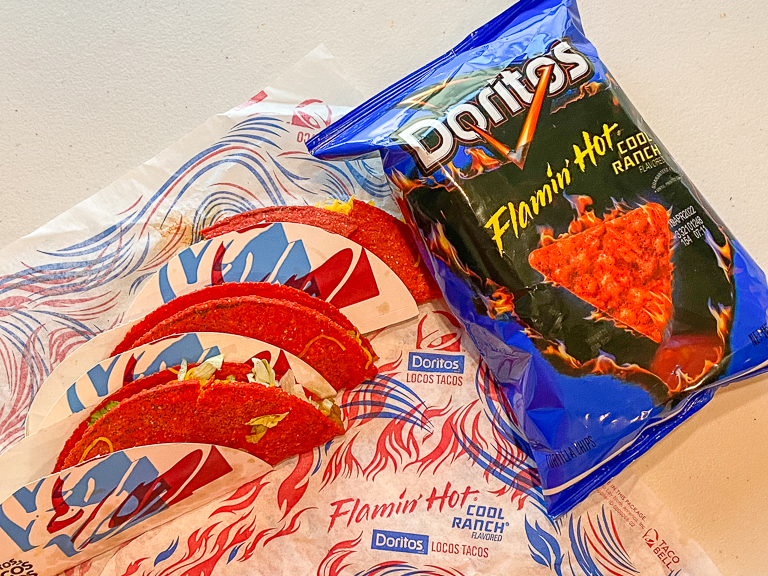 Alli is excited. I certainly am too. This little boy who tries his best to avoid spicy foods is not super thrilled. 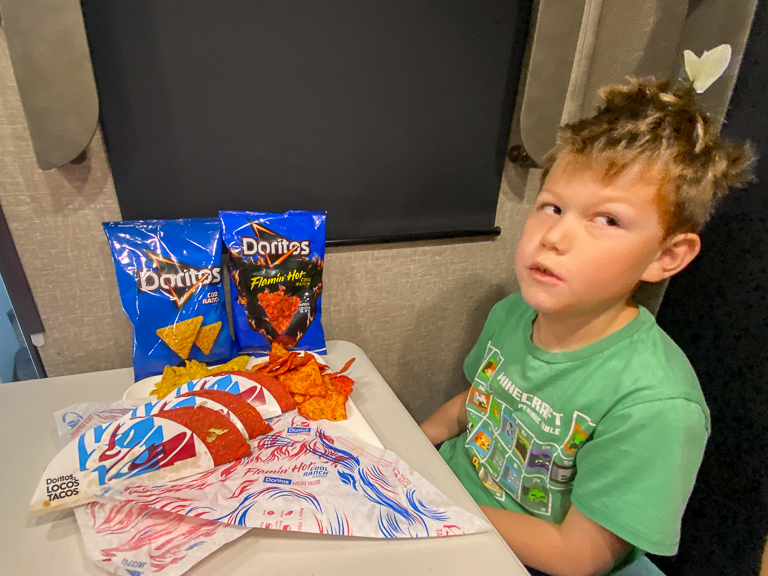 Let's give the Flamin' Hot chips a try first. They don't have the same deep red color as the taco shells, but they do have that bright red color that's consistent among Flamin' Hot flavors. 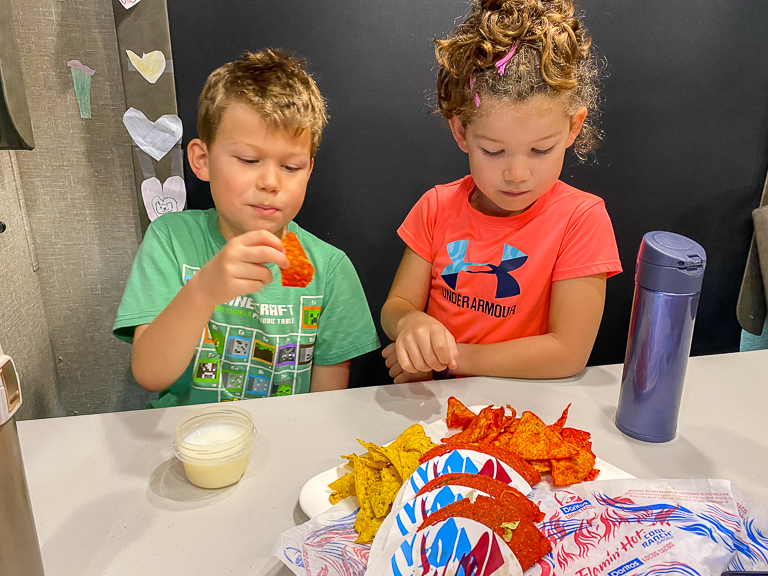 How is the flavor though?
A few weeks ago, I gathered a bunch of the family and we tried 11 different Doritos flavors to find our favorite. My favorite of all 11 was the Cool Ranch Doritos. These though. These are better. They still have that Cool Ranch flavor that I love, but they also bring a little bit of heat to the party. I love that! It's not like those Scorchin' Sour Cream and Onion Pringles that didn't have any Sour Cream and Onion flavor. 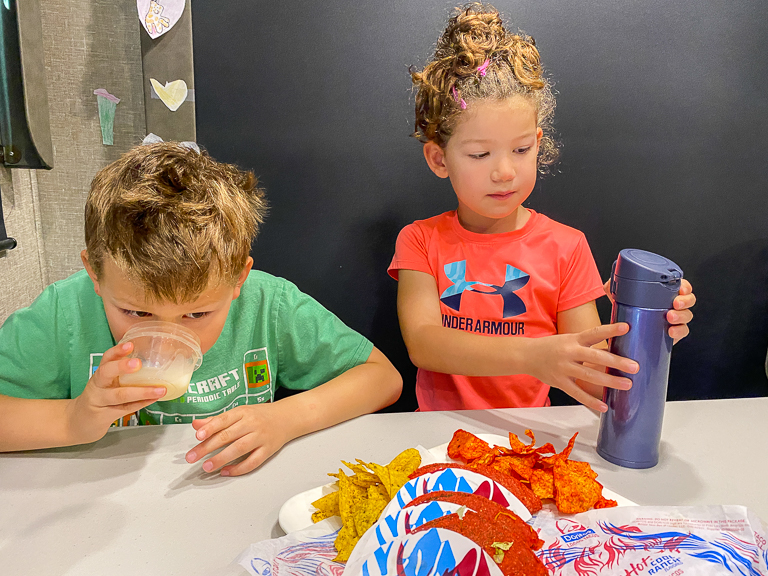 Ian of course gives them a thumbs down. Alli thinks they are a 9 out of 10. Theresa thinks they're okay, but regular Cool Ranch is better. I would give them a 10 out of 10. 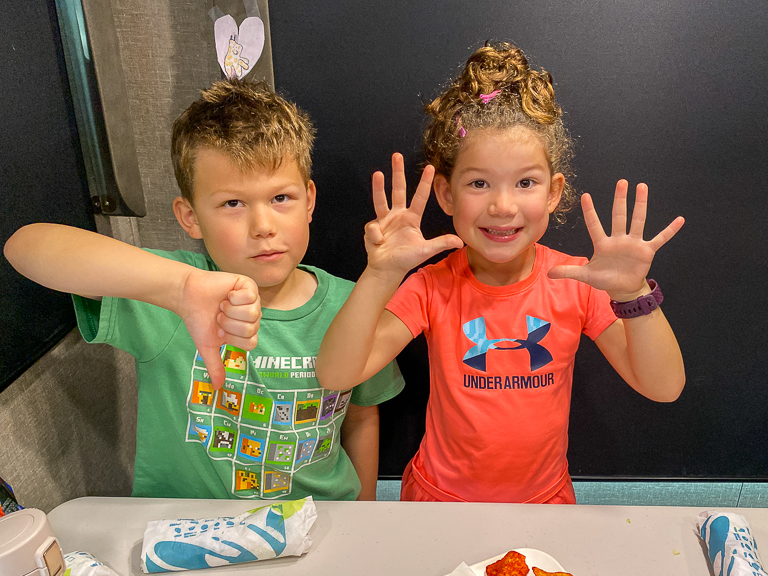 Time to enjoy some tacos! Instead of being dusted with red flavor, Taco Bell must have added dye to the corn meal because this is super deep red. You can see some of the spices on the shell, but if there's any of the Flamin' Hot powder, it's difficult to see. 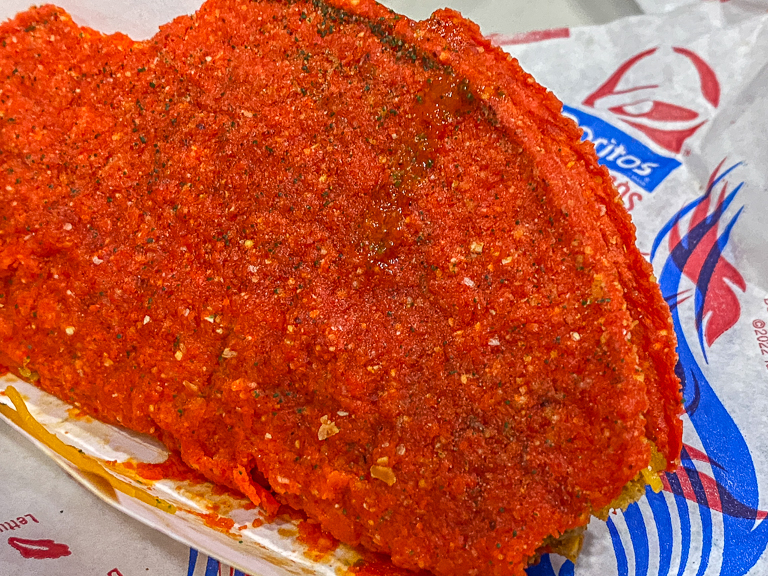 How is the taco? First off, it's way better than a regular crunchy taco shell. It adds a different dynamic to the taco. 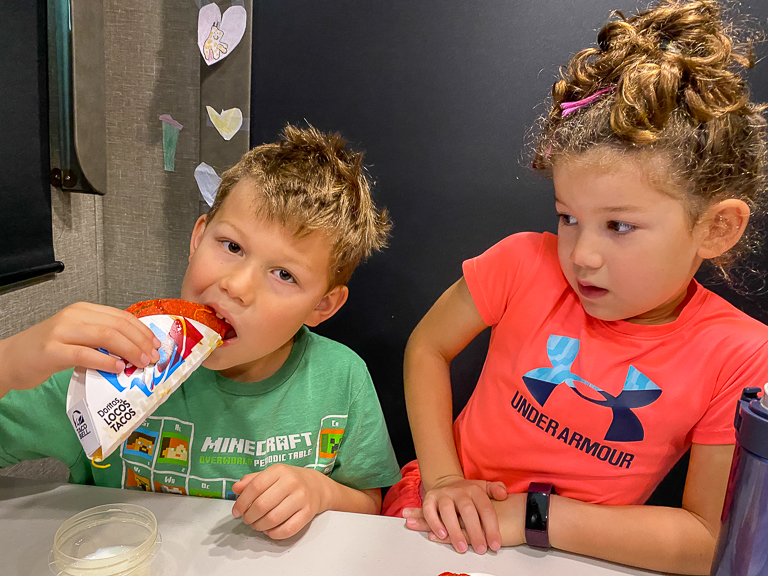 There's some spice to the taco shell, but not to the level of the chips.
Ian - It wasn't as bad as I thought it would be. 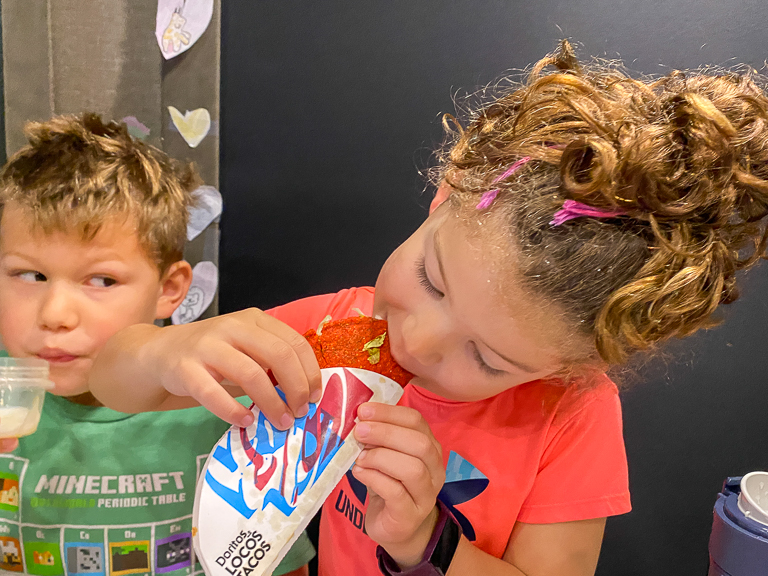 Theresa was surprised at how good it was. She thinks it's a lot better tasting, but has a hard time paying the extra $0.60 for a different taco shell. 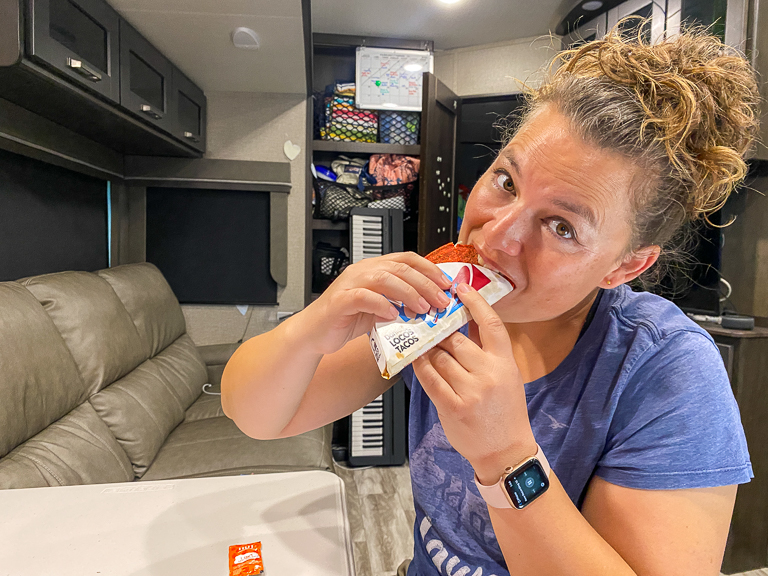 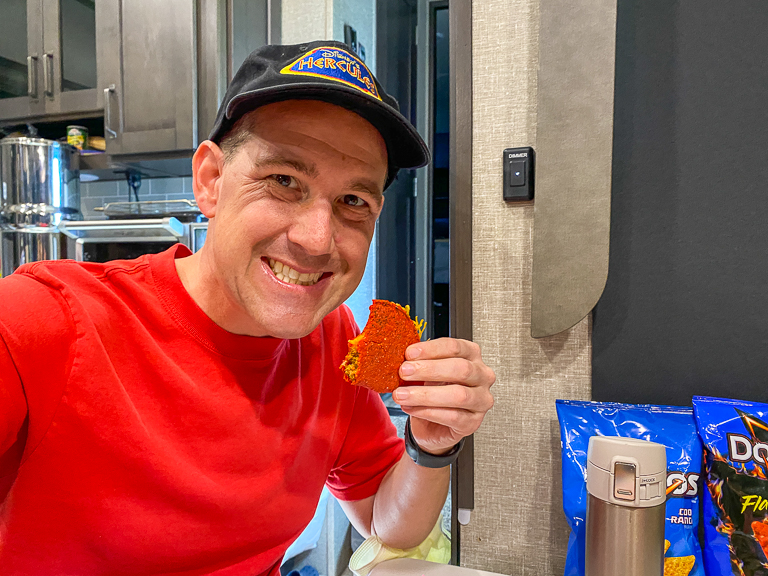 They get a 10 out of 10 from Alli. Ian didn't put his thumb straight down this time. He's like 25% maybe.
I'm glad Taco Bell brought back a version of the Cool Ranch Doritos taco! I know what I'll be ordering for as long as they're available. 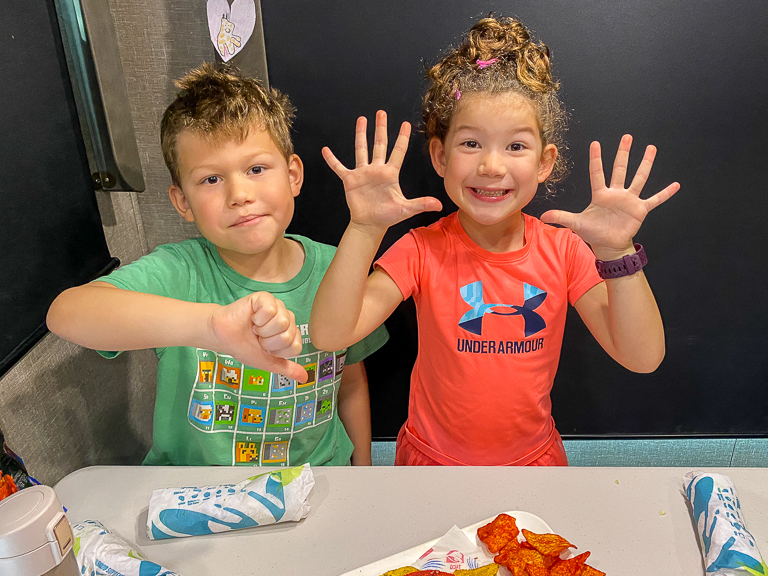