Happy Sunday! And today is a special day because it's Super Bowl Sunday! Hmm, what kind of pizza would go well with the Super Bowl? How about a loaded chicken nachos pizza? Sounds tasty to me! 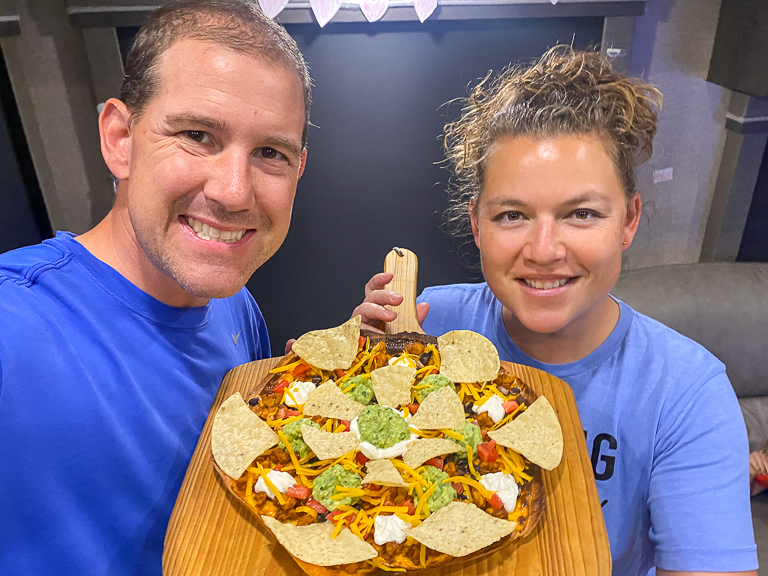 It all starts with the pizza crust. So far I've made thin crust pizza every week this year, might as well continue it this week. I like to make the dough up a little ahead of time and let it sit on the counter wrapped in plastic wrap. 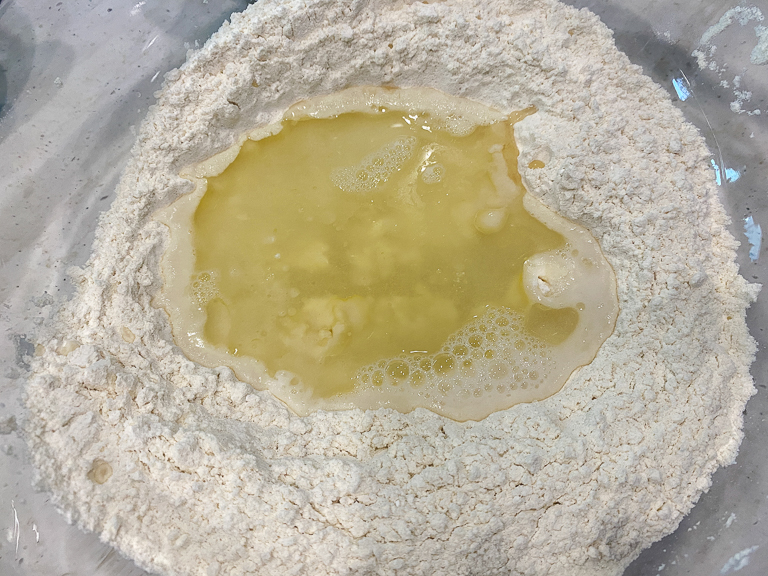 If this is going to be a loaded nacho pizza I need to make some toppings to go on it. For the last 6 months on Tuesday, when I make tacos, I have made guacamole to go with it. I have my favorite recipe (based on the Chipotle recipe) with Avocados, sweet onion, cilantro, jalapenos, lemon and lime juice, and salt. 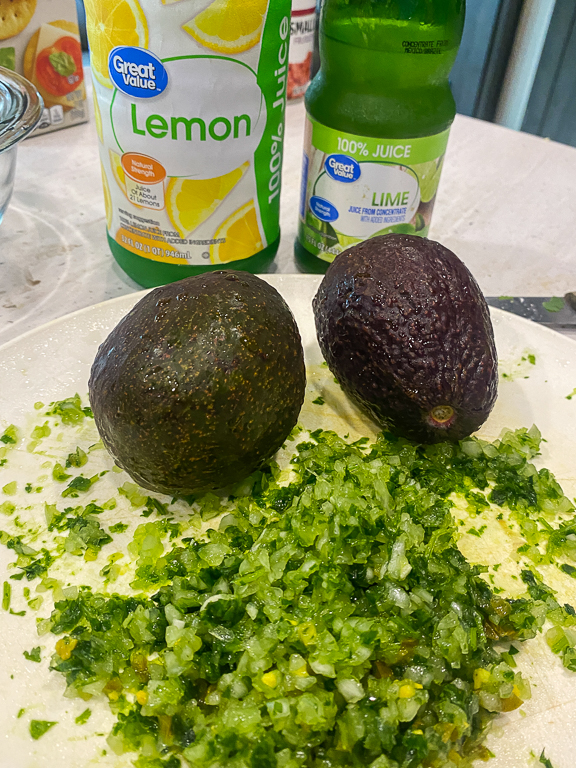 The flavors are a little strong when it's first made, so it's always nice to let it mellow in the fridge for an hour or two. Plus chilled guac is always better than room temperature guac. 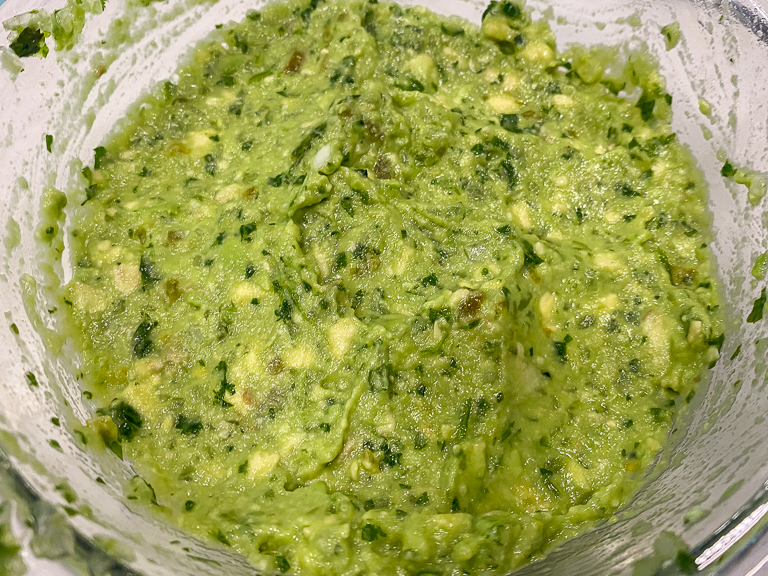 Instead of ground beef, we're kicking it up a notch with diced chicken pieces. I cooked them up with a heavy pour of taco seasoning. 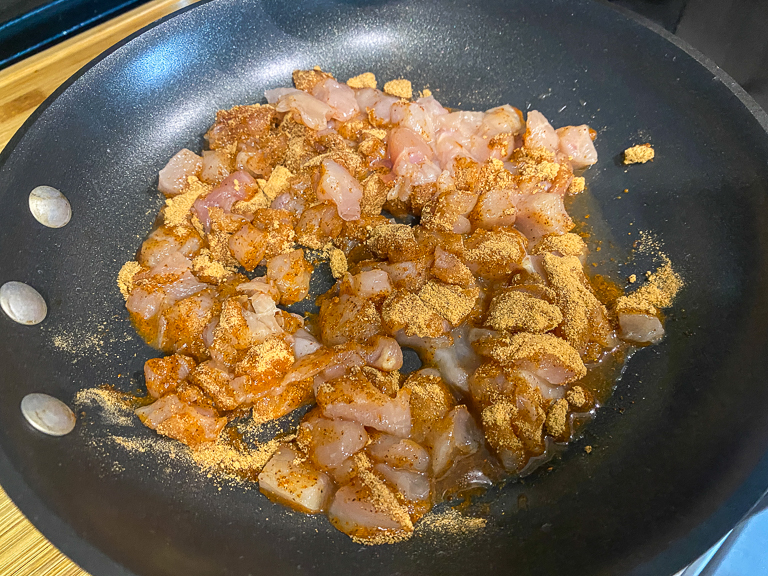 Instead of tomato sauce, I think a little bit of nacho cheese sauce will be even better as a base. 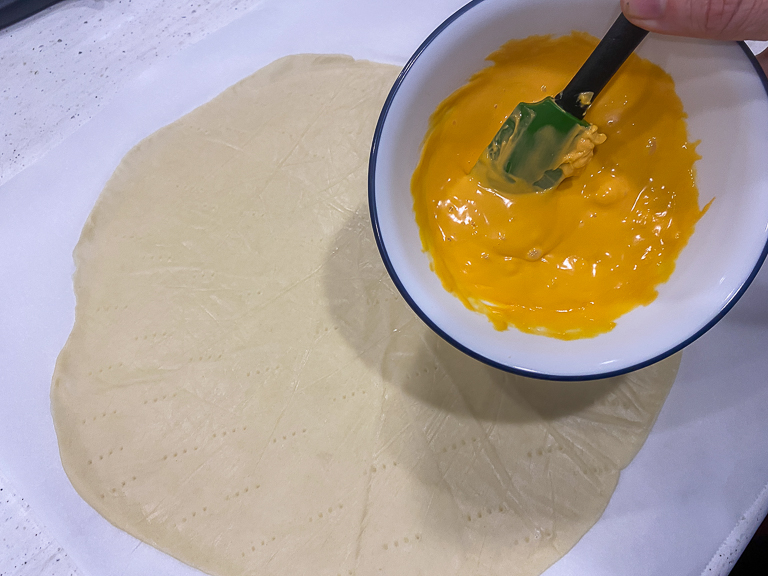 The pizza got topped with my cooked taco chicken and black beans. 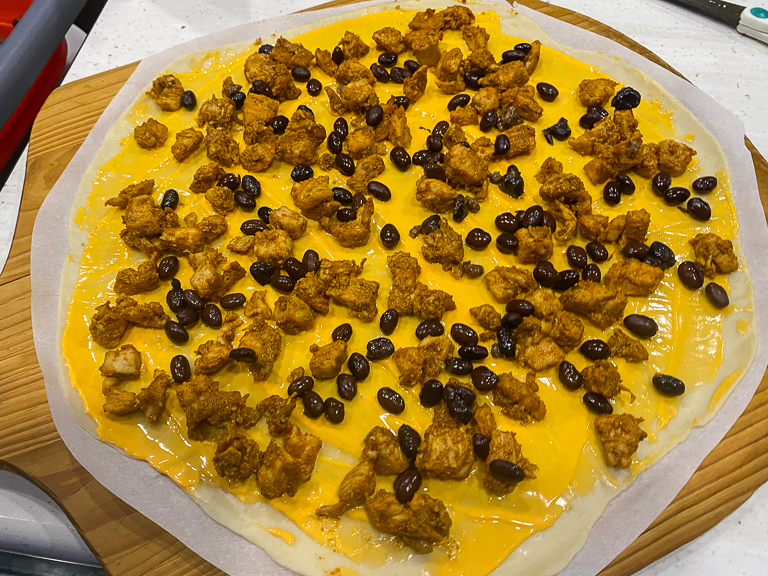 Coming out of the oven it looked like this. We're getting there, but there's still a ways to go before I'd considered it to be loaded nachos. 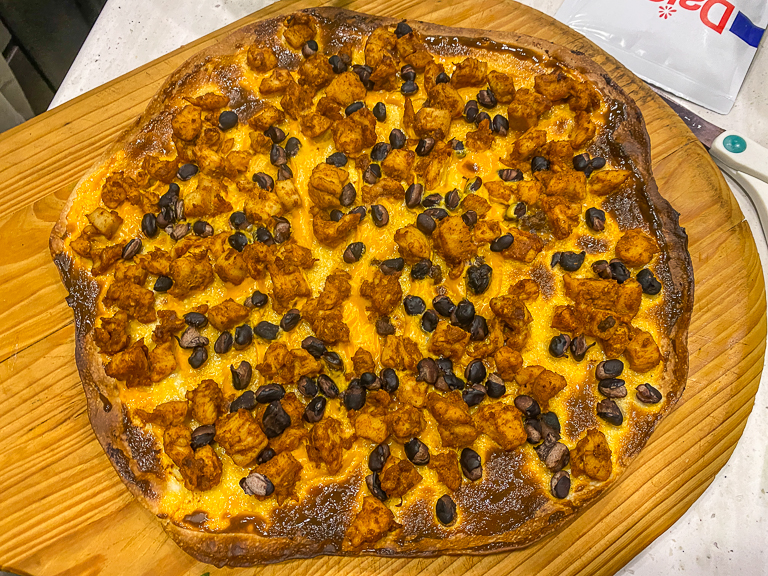 Theresa diced some tomatoes to spread over it. I piped sour cream and guacamole on top of that. 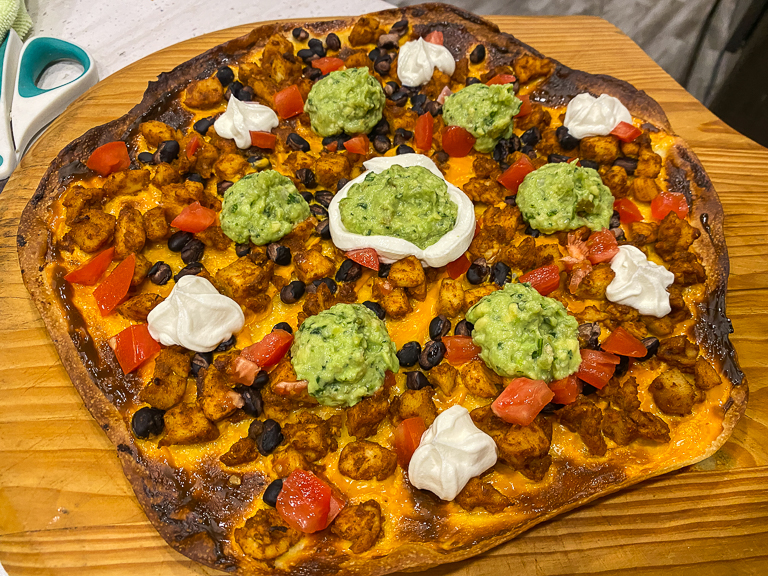 Finally we'll add some shredded cheese and then a few tortilla chips on top of that. That's perfect! 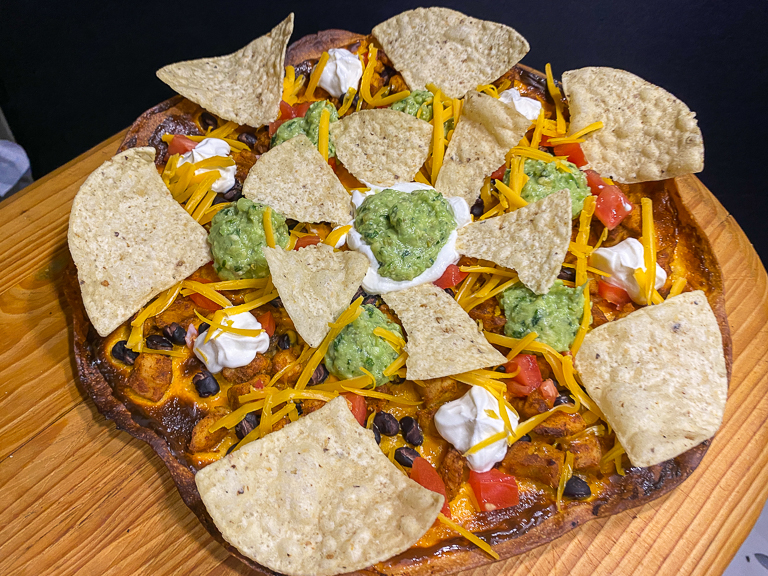 I don't see how this could be anything but delicious. 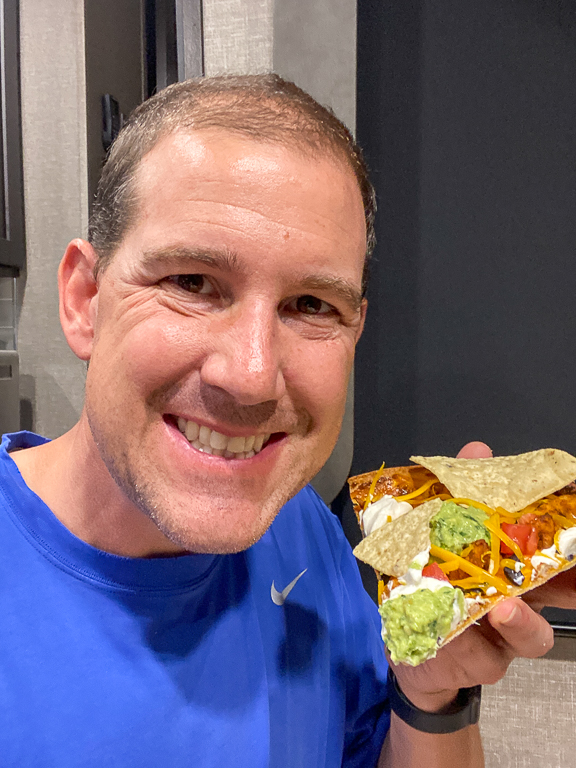 Just needs a little hot sauce on top. Thankfully Taco Bell has me covered. Give me the Hot sauce for the flavor and the Diablo to bring the heat! 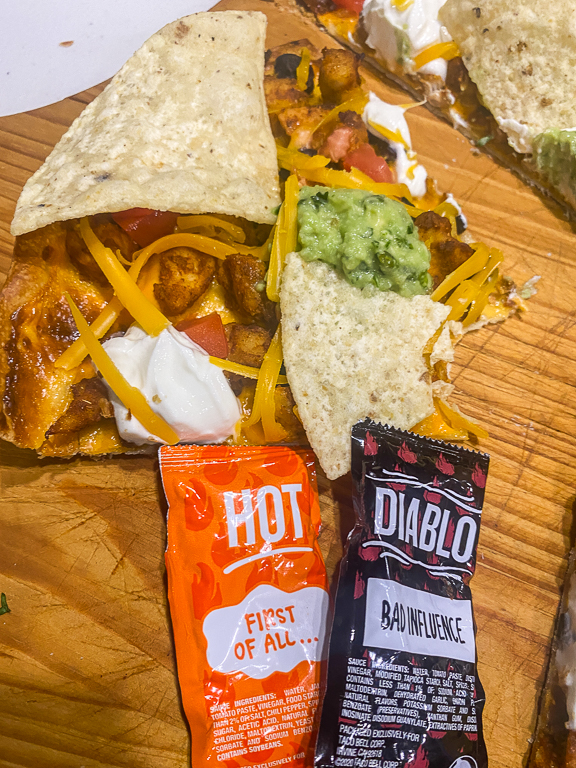 Theresa likes to have consistency in her pizza, so she's spreading her toppings around. 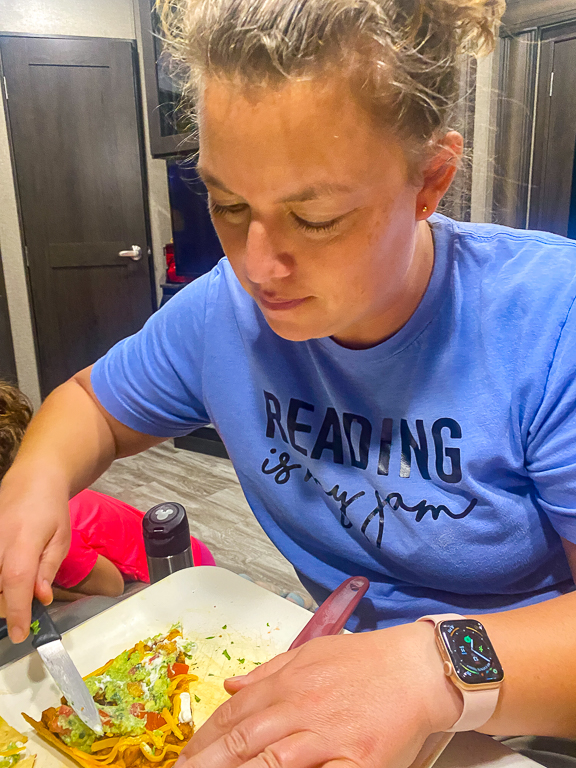 And she's also crushed the chips to give every bite a bit of crunch.
Yum! That looks fantastic! 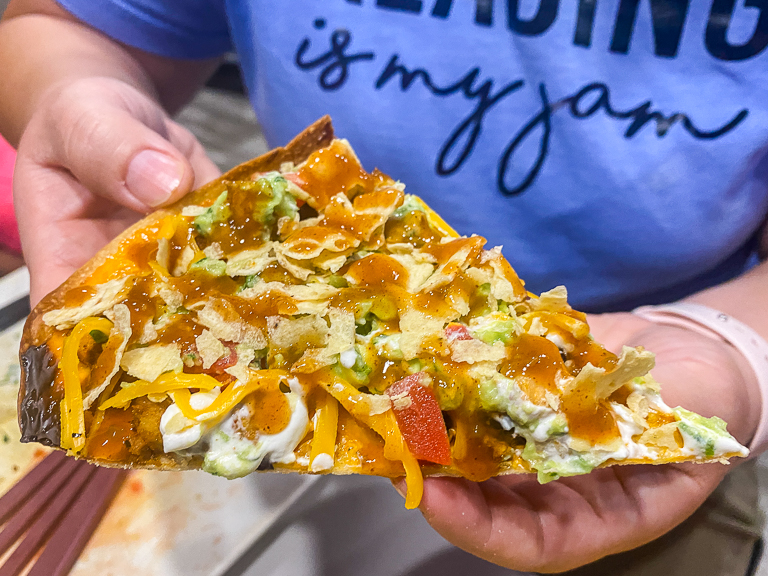 And my thin crust recipe and baking process is on point! This is crispy and holding up to a few toppings. Theresa was impressed. The Loaded Chicken Nachos pizza was a big success tonight! Theresa and I agreed that the thin crust lets the toppings shine through more than a bready crust. And the crackery thin crust had a great crunch to it, just like the tortilla chips. It went together very well. 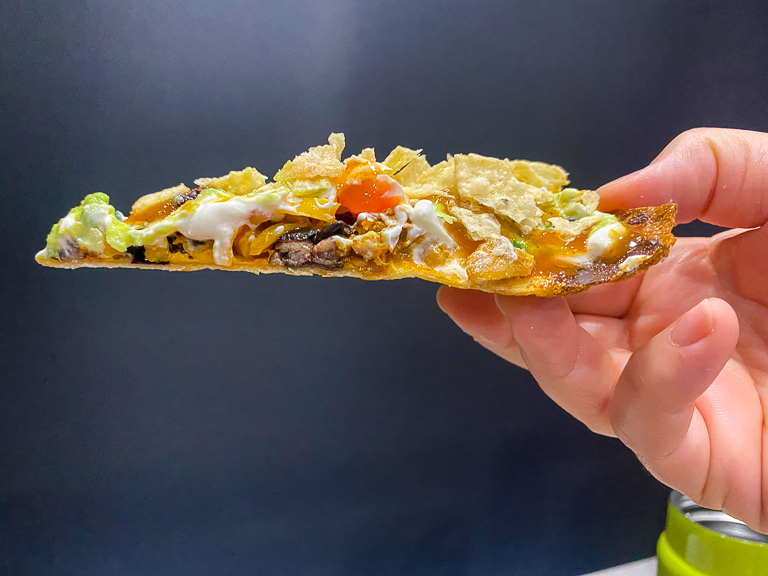 Alli and Ian both gave it a try. 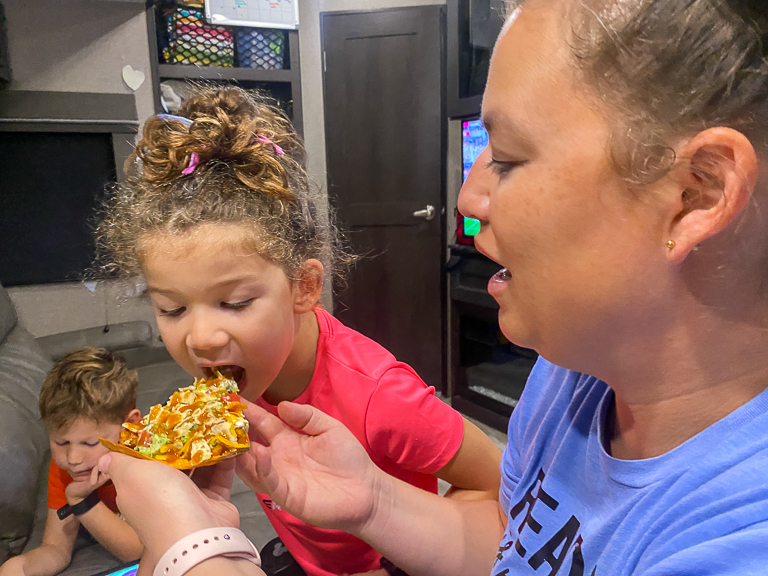 They thought it was tasty... 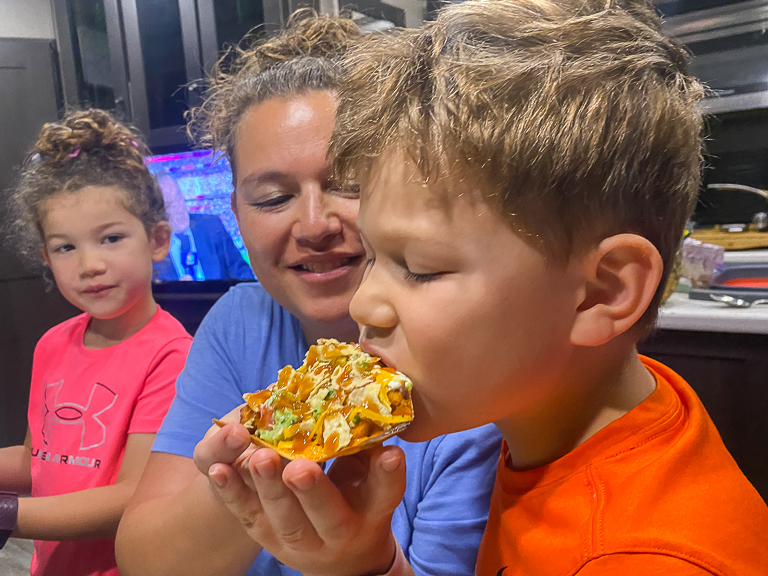 But they prefer their own pizzas. I went ahead and made them an extra pizza so they'll definitely have leftovers this week. 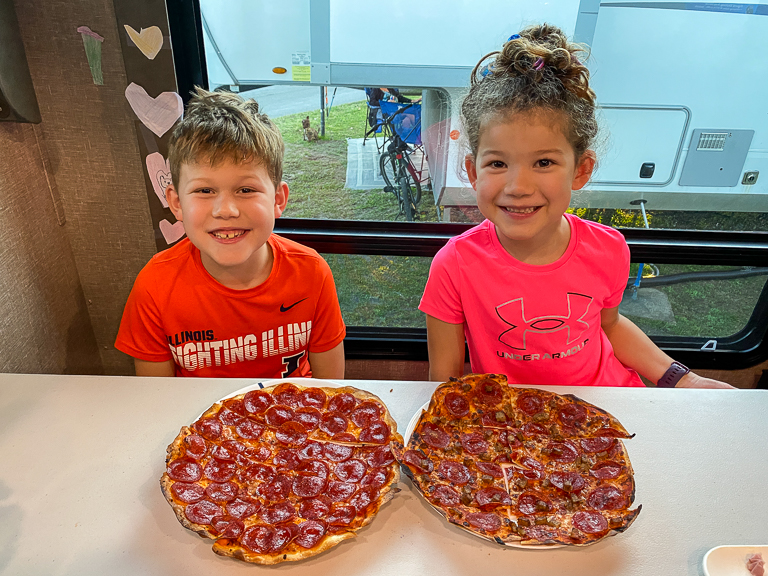 And since it's thin crust, one pizza isn't all that filling. I made Theresa and I each another pizza so we can have leftovers too. Theresa went with her standard toppings. She enjoying pizza night more and more these days. 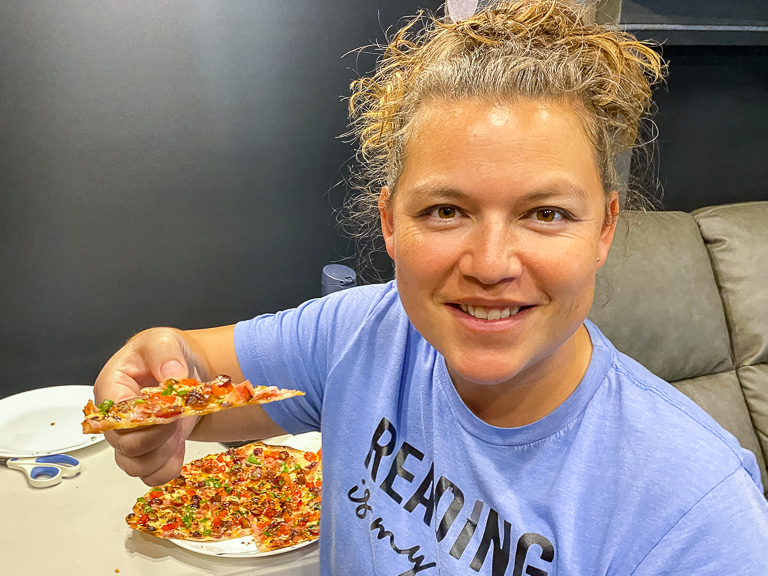 I went with similar toppings, but a little bit more meat.
Pizza nights are always tasty! 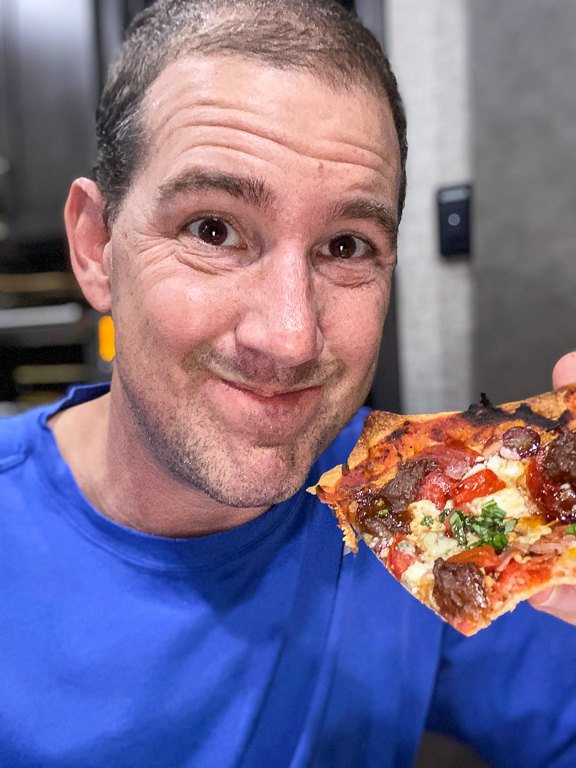