Honestly, I've been holding on to these Jelly Beans for a long time. There wasn't a nearby Krispy Kreme to compare them against, so these sat in my taste test cabinet for a few years... 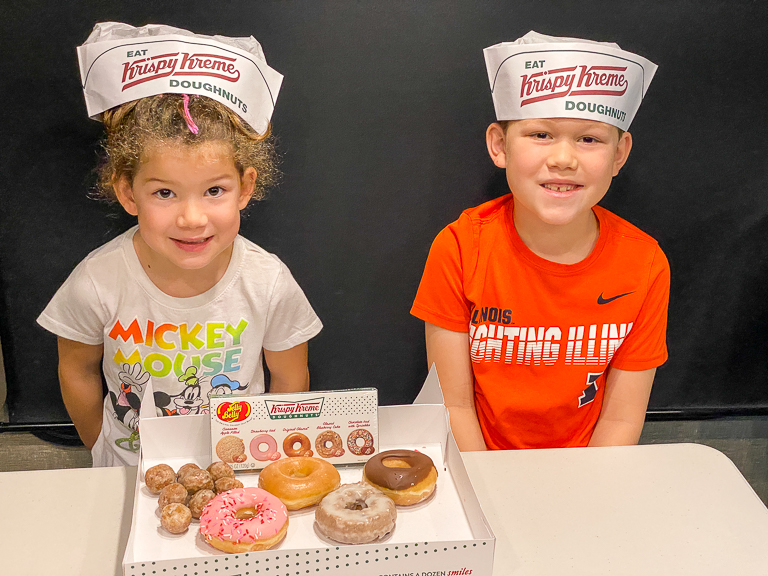 But they're Jelly Beans, so they should still be good, right? Finally in Florida, just down the street from our campground is a Krispy Kreme! There's 5 different Jelly Belly flavors! Cinnamon Apple Filled, Strawberry Iced, Original Glazed, Glazed Blueberry Cake, and Chocolate Iced with Sprinkles. 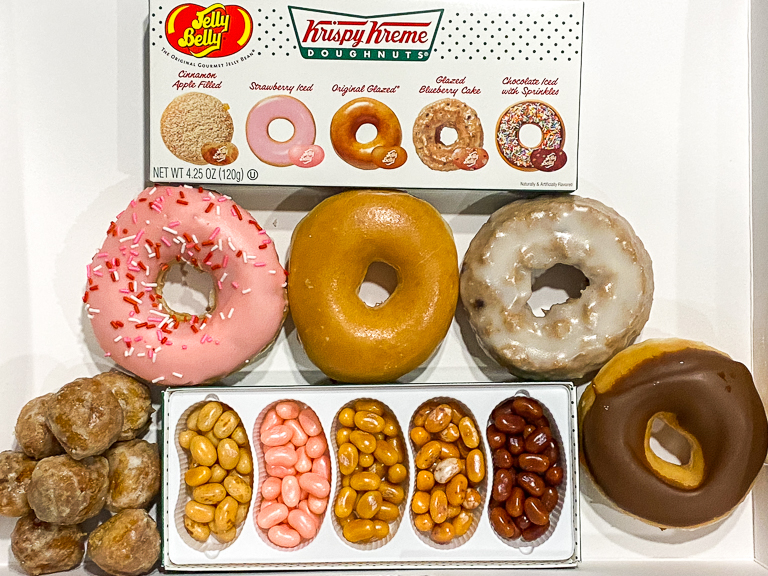 I used the Krispy Kreme app to keep an eye out for when they had "Hot Doughnuts Now". 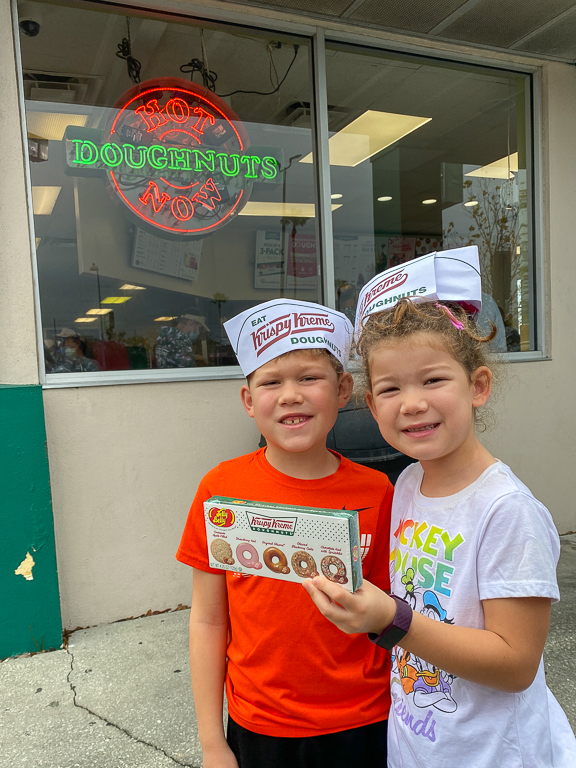 The kids were excited. They have great memories of going into a Krispy Kreme when the sign is lit and getting a free donut. They weren't giving any away today though. I read later that they're saying it's due to Covid. 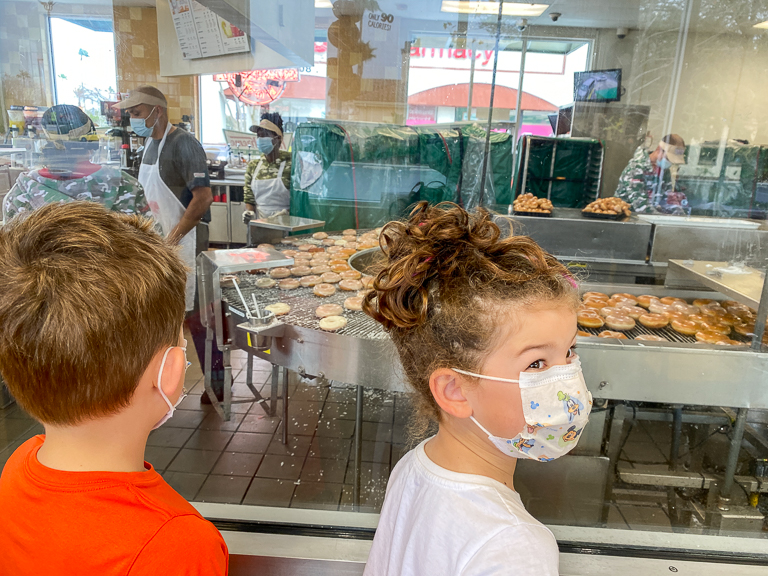 Their donut machine is having problems too. Donuts that are stuck together, didn't get flipped correctly, fried on one side, missing icing entirely, or having way way too much icing. The workers had trays and trays of donuts that went into the trashcan. 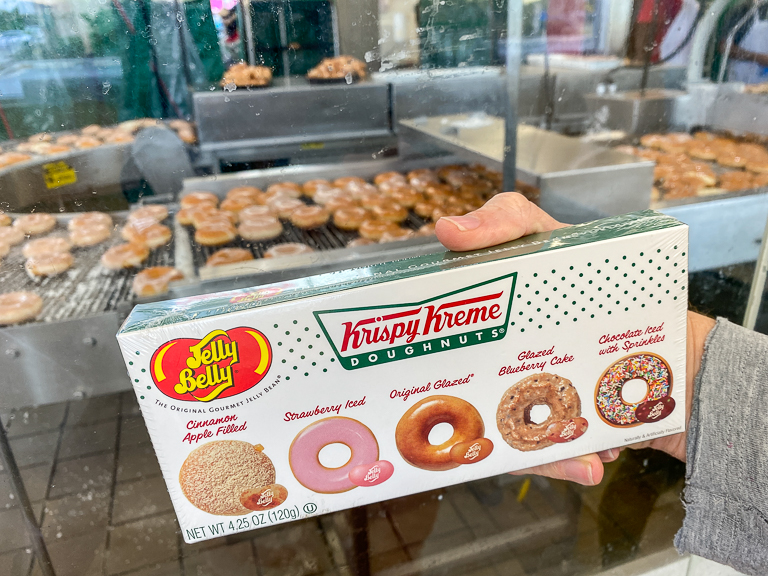 We were able to get four of the five donuts there, but were missing the fifth. I hate not having a complete taste test. Luckily Theresa saw that Krispy Kreme sells "Bites" in grocery stores, and Apple Cinnamon is one of the flavors. That'll have to do! 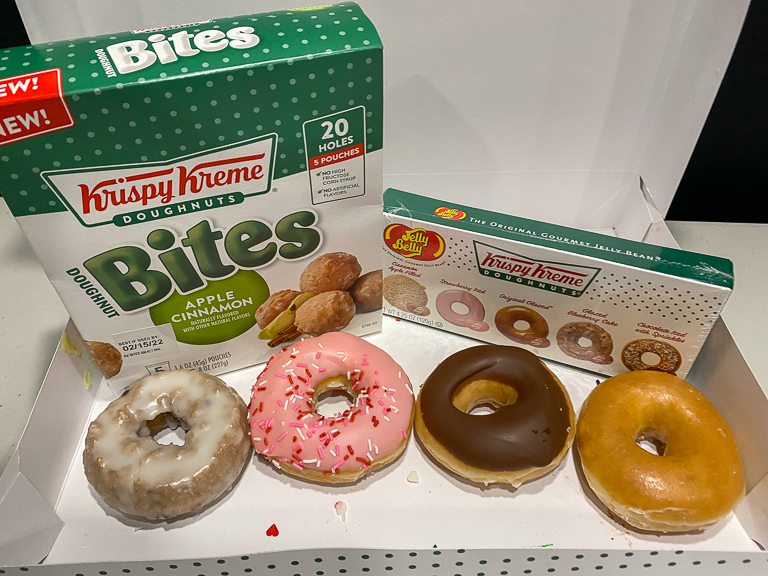 The current Krispy Kreme menu doesn't quite match what's in the package of Jelly Bellys. The Strawberry Iced has sprinkles, while the Chocolate Iced does not. 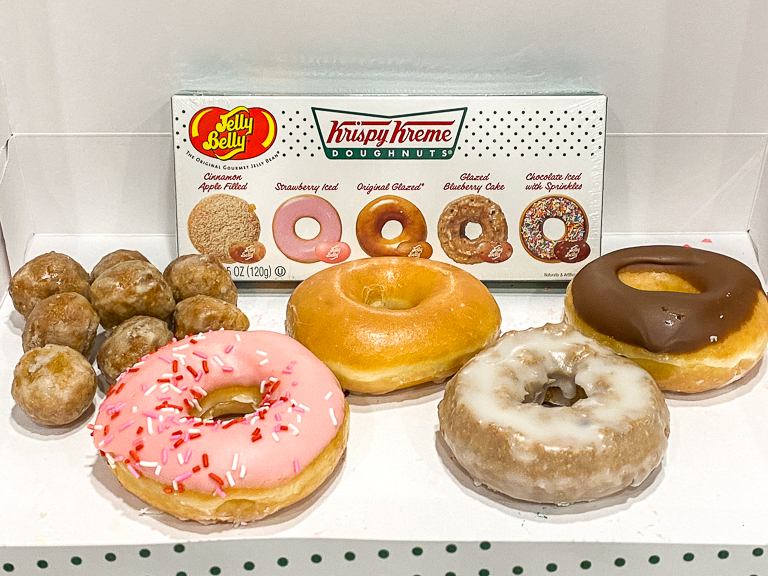 A look at the Krispy Kreme Jelly Belly jelly beans. The Apple Cinnamon, Blueberry, and Chocolate Sprinkle beans have speckles in them. 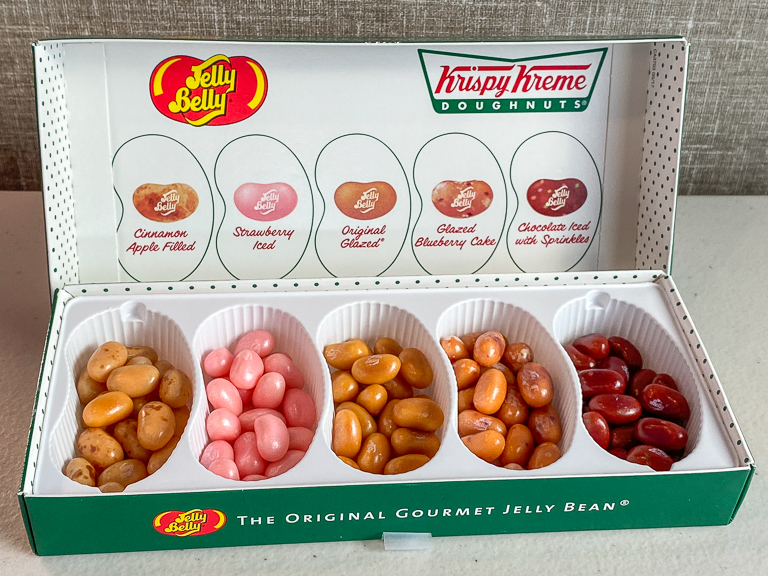 We opted to give the Jelly Beans the first try. We had mixed thoughts.
Apple Cinnamon Jelly Bean - Ian said they tasted bad. Rita could taste a little bit of cinnamon flavor, and I can pick out some apple.
Strawberry Iced Jelly Bean - Theresa thought they tasted like a strawberry candle would. It's less of the artificial strawberry flavor, but more of the Tokyo strawberry flavor.
Original Glazed Jelly Bean - Ian thinks it tastes like pure sugar. Theresa agrees that it's just sweet. I do get a hint of "baked" flavor.
Glazed Blueberry Cake Jelly Bean - Mmm, that is a good blueberry. It's got a tasty blueberry muffin flavor.
Chocolate Iced with Sprinkles Jelly Bean - Alli thought it tasted like hot chocolate. Theresa said that chocolate shouldn't have that texture. It's a bit like a Tootsie Roll. 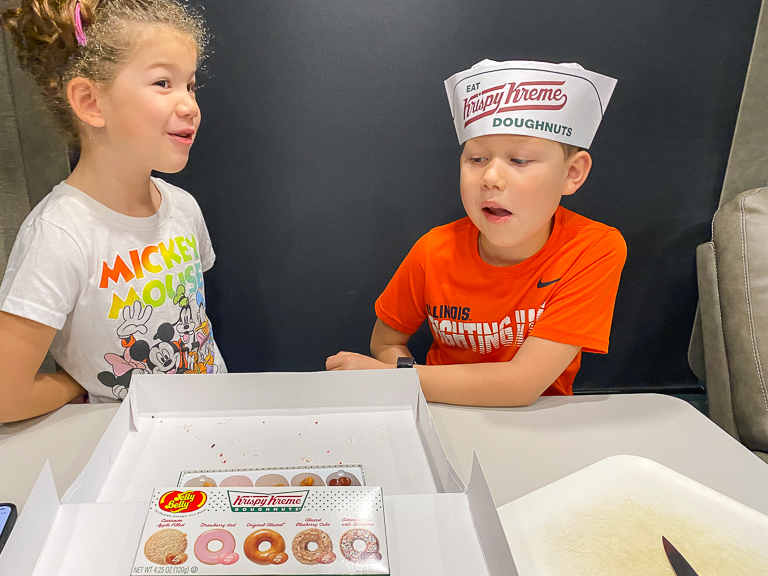 Well, let's give all the Krispy Kreme donuts a try. I cut them into pieces so we're not eating too much.
Apple Cinnamon Bites - Bleh! Not a single person liked these. I'm sure the real donuts from Krispy Kreme would have been much better. Despite the packaging saying there were no artificial flavors, they have a very strong artificial flavor to them. I think being a cake style donut wasn't helping it. Alli and Ian liked them though.
Strawberry Iced with Sprinkles - Theresa thought the regular donut was much better than the Jelly Bean. Rita thought so too, but it's not a donut she'd ever buy. Despite being pink, Alli hated it.
Original Glazed - I mean, this is what Krispy Kreme is known for. They are really good, especially when they're warm.
Glazed Blueberry Cake - I like the blueberry muffin flavor that this one has.
Chocolate Iced - Theresa doesn't care for chocolate glazed donuts. Ian says it's his favorite out of all the donuts. 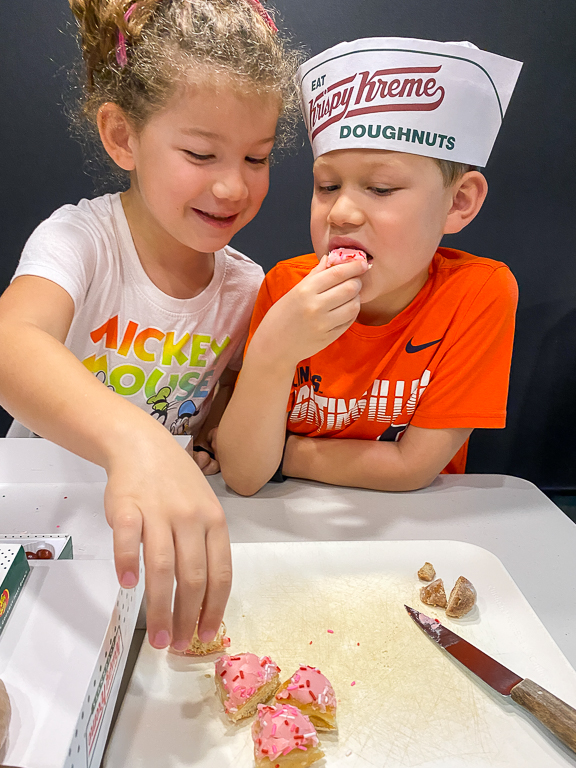 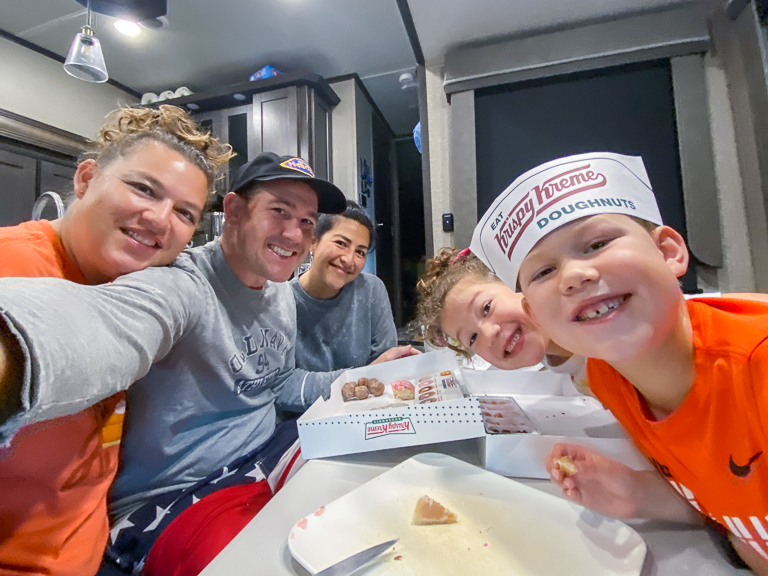 Now we can continue to eat some of the specialty donuts we bought. It's near Valentines, so they have cute decorated shapes!
Alli - I think it's a reindeer.
Joe - Are you sure it's not a bear?
Alli - It has a red nose. I think it's Rudolph. 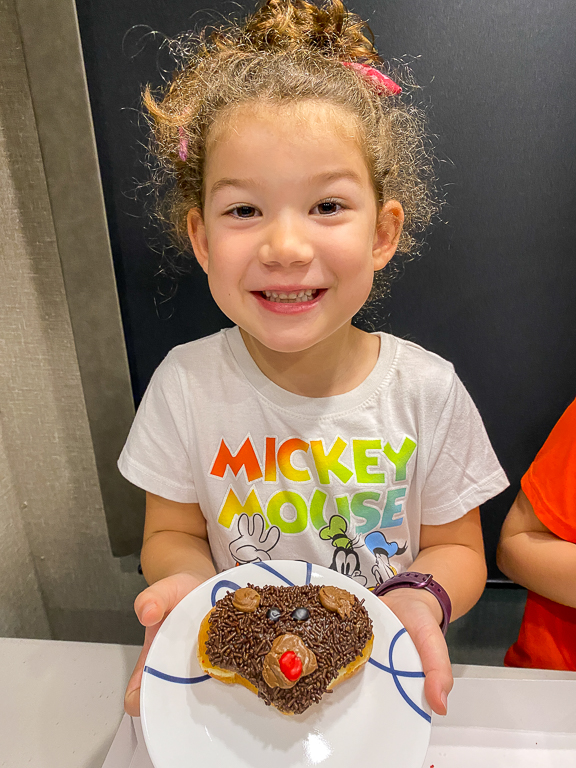 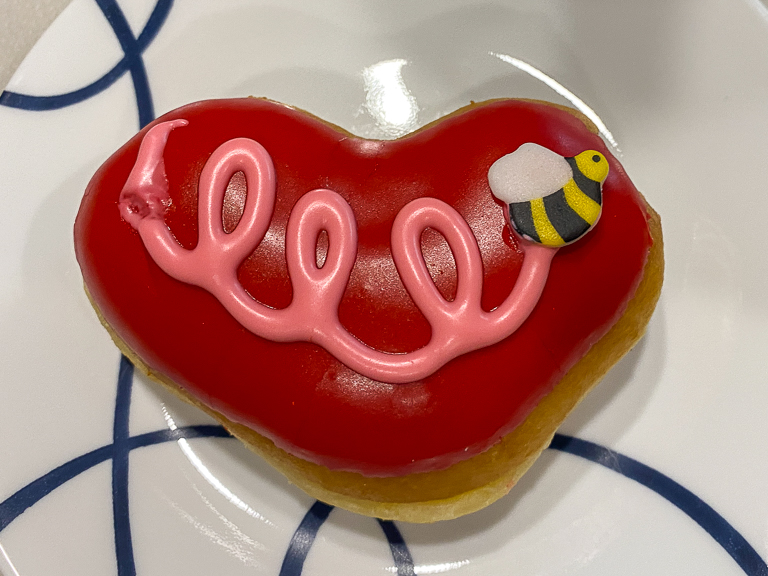 Theresa and Rita enjoyed the Lemon filled donut.
Why did I wait so long for this one? Krispy Kreme donuts are delicious! 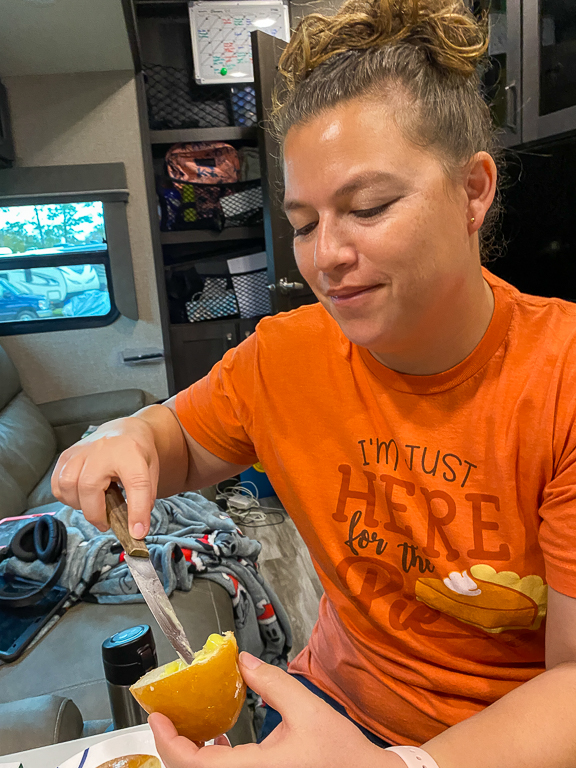