Does Oreo know me or what?
For my traditional Christmas treat this year, I decided to make English Toffee for the very first time while I was visiting Colorado. It was a huge hit! A few weeks later, someone sent me a link to the Oreo flavors coming out in January, and look at that, Toffee Crunch Oreo!
Since making that first batch of toffee in Colorado, I've made it nearly a dozen times now. My sister-in-law Megan thinks it's especially delicious, so I was thrilled she was out visiting so she could join us for this taste test! 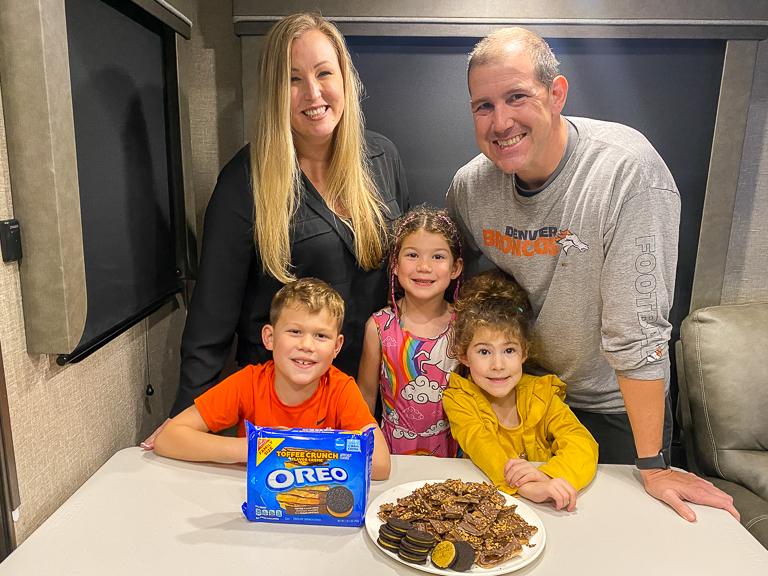 Like usual, we'll try the Toffee Crunch Oreos, and then compare them to the real thing and see what we like best. 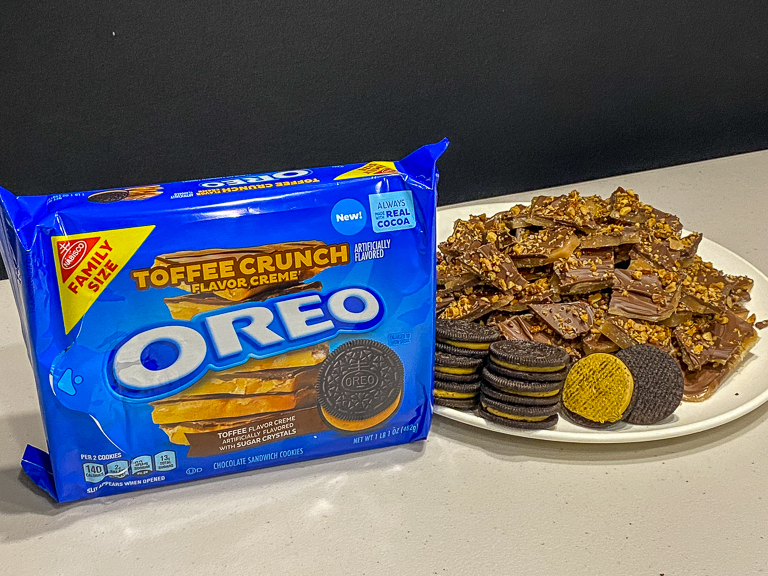 First things first, we've got to make some toffee. I chopped and toasted the almonds with some butter over the stove. 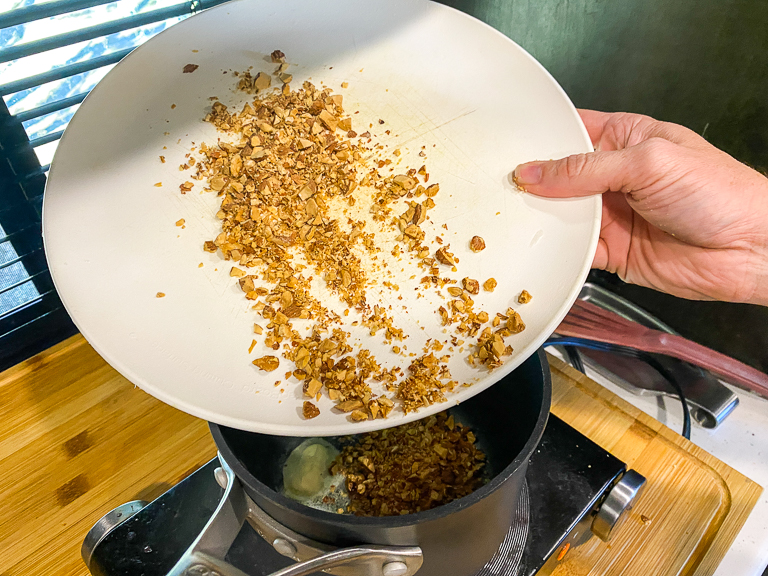 Then we measured the rest of the ingredients into a heavy saucepan. 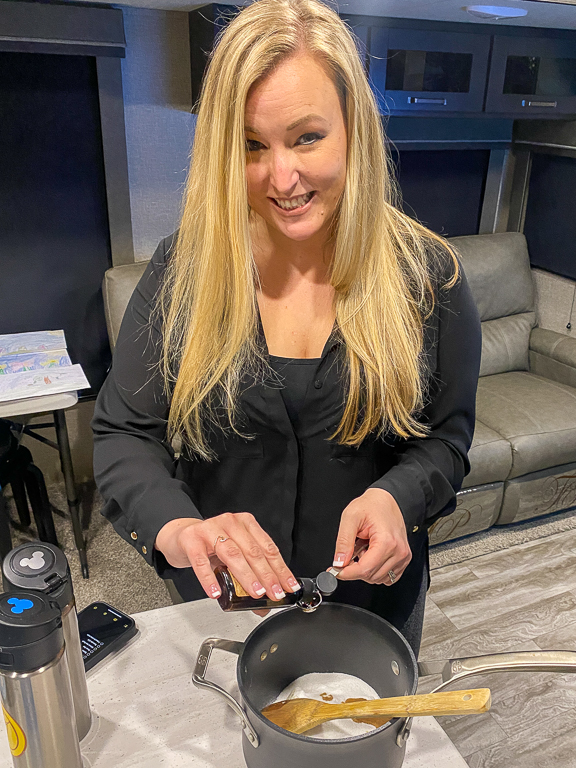 That's going onto the stovetop burner on low until everything melts together and gets up to temperature. 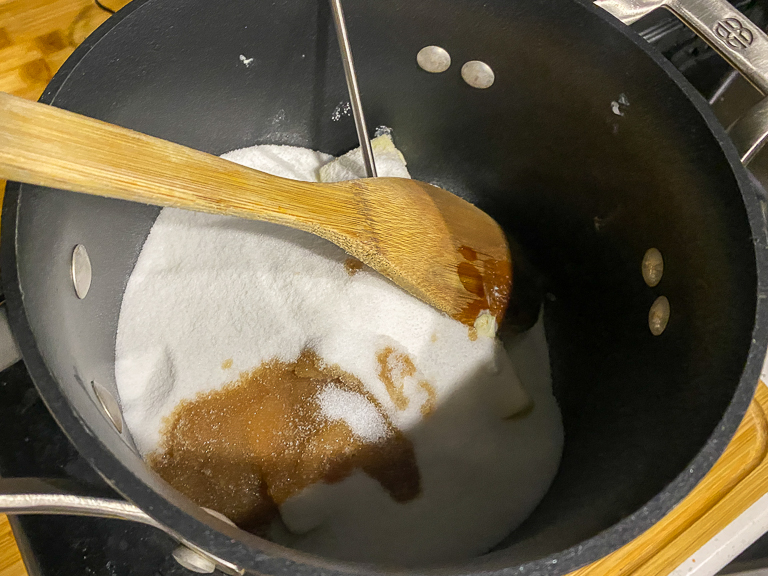 When I was in Colorado, I made toffee 5 or 6 times. Every batch came together perfectly and I thought it was just that easy.
Then I got to Florida and tried again. My first attempt was a failure, the toffee didn't set hard. My second attempt, the butter split and pooled separate from the sugar. My third try was better, but still wasn't right. What's going on?
Theresa and I researched it and found multiple things it could be. Different butter, too little stirring, too much stirring, not hot enough, temperature changing too quickly (due to the cold spoon being out of the pot and stirring the hot candy), high humidity, and high ambient temperatures. After many attempts, finally I got it to a place where I was happy with it again. 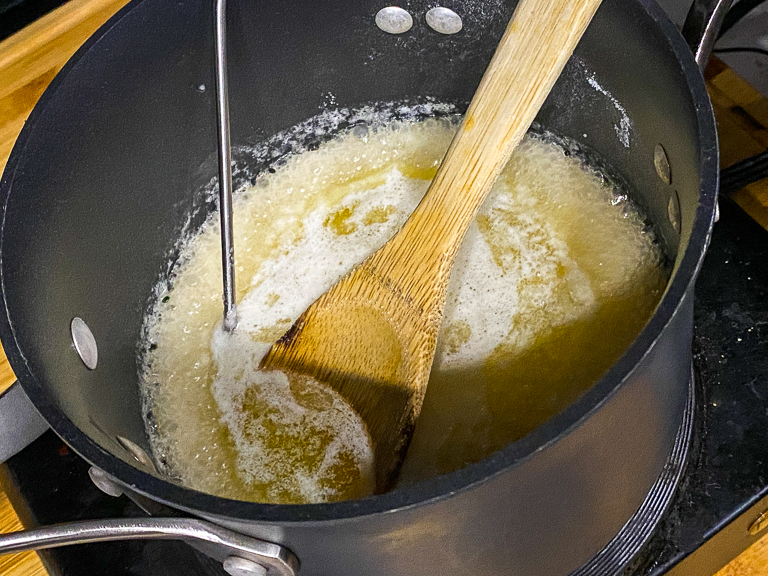 The ingredients are the same as before, but this time I only stirred things as the butter melted to incorporate the sugar. I left the spoon in the pot the entire time. For the whole time that the toffee was coming up to temperature, I only gave it a light stir one time. Otherwise, I let it boil away with no intervention. Being at sea-level, I also found that I had to take the whole mixture up to at least 295F, at least 10 degrees hotter than what I was doing in Colorado. 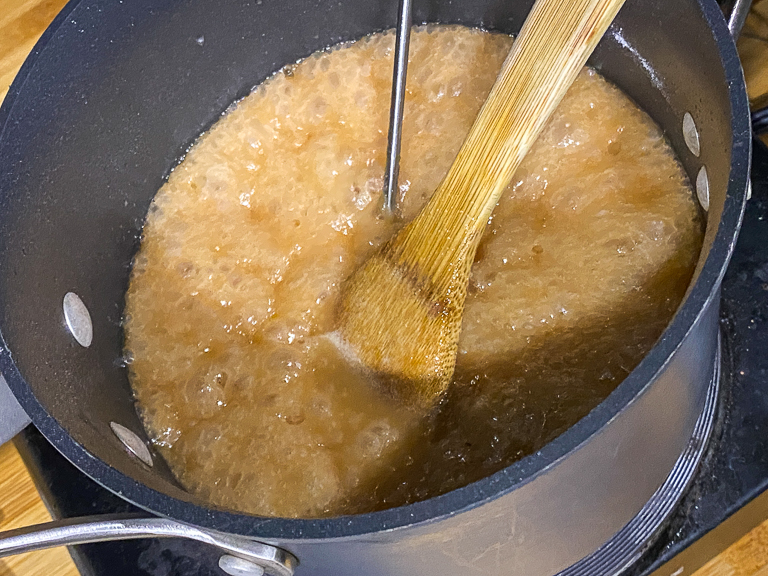 When the toffee looks like the color of peanut butter, it's ready to come off the heat and pour. 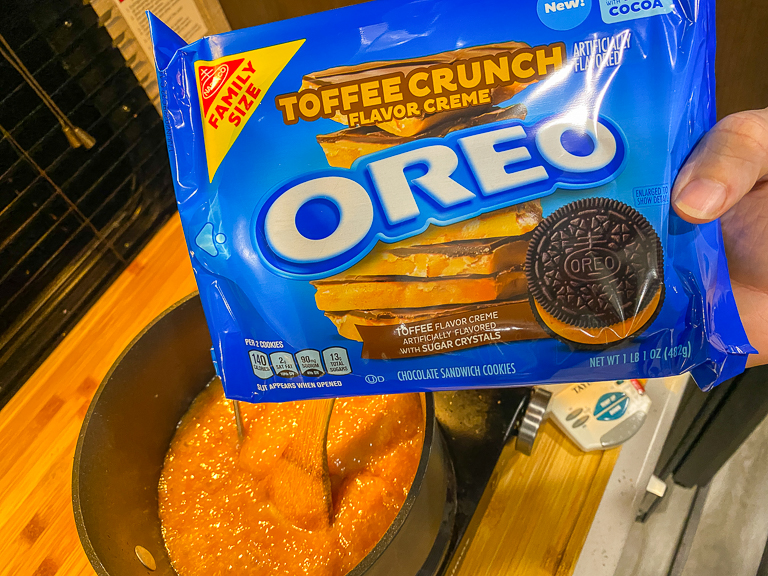 Right on a parchment lined baking sheet. Otherwise we'd be in for quite a sticky situation. 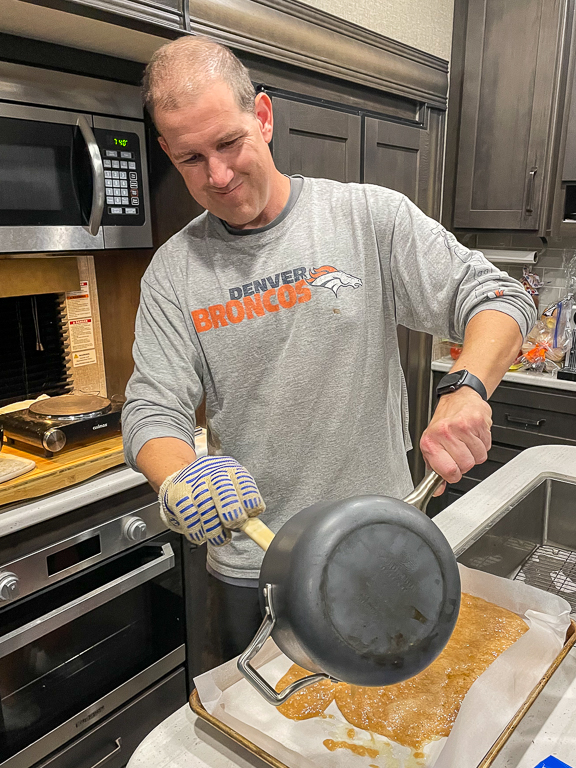 I left it to cool for just a couple minutes. 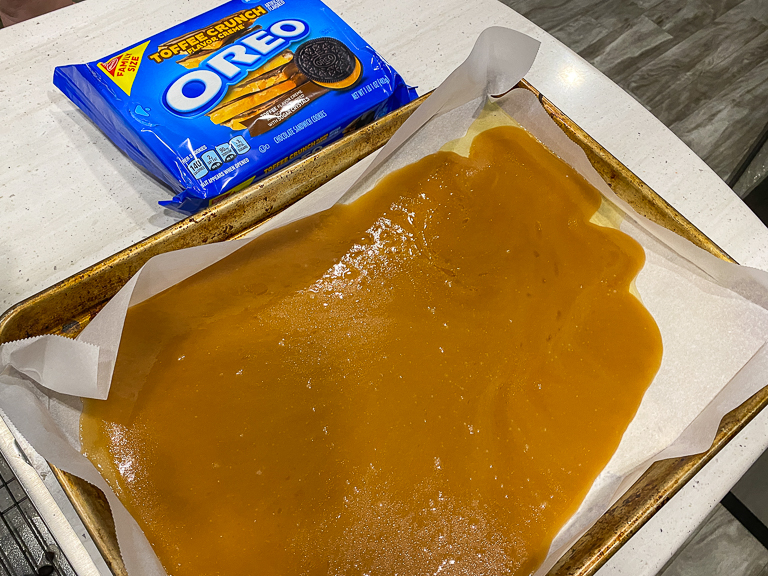 Then I spread chocolate over the top of the hot toffee. The heat from it is enough to melt the chocolate chips, without having to use a double-boiler to melt them separately. 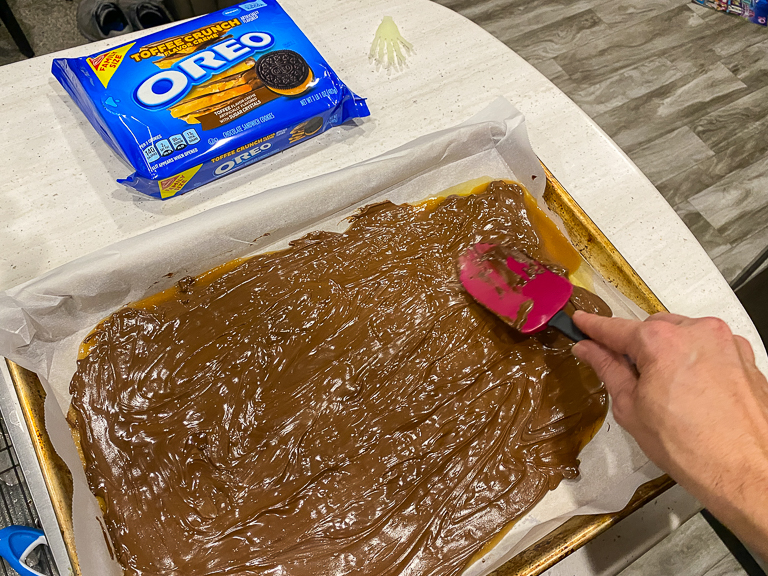 Megan called dibs on the spatula. 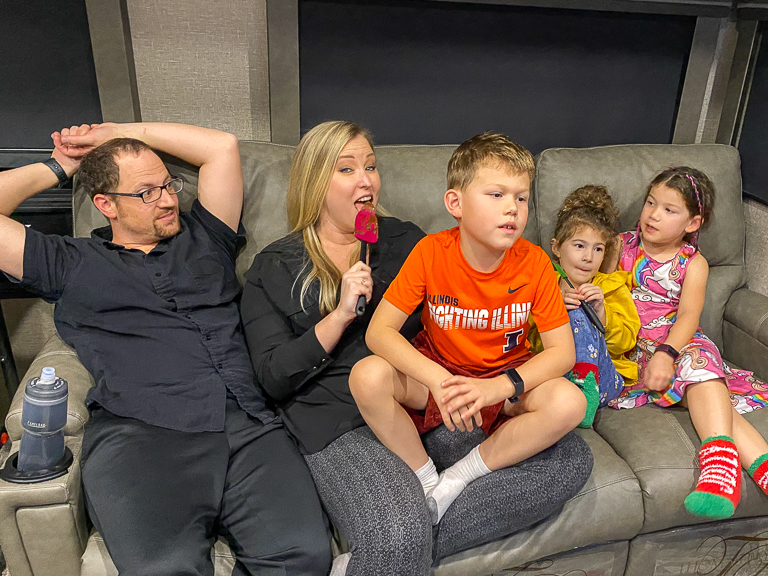 The chocolate needs to set so this needs to cool down. My RV fridge would have a hard time with that, but luckily (I guess) the nights are starting to get cold in Florida. Temperatures are down in the 40s! I put it outside, but to keep any critters away, I put it in the bed of my truck and put the bed cover on. 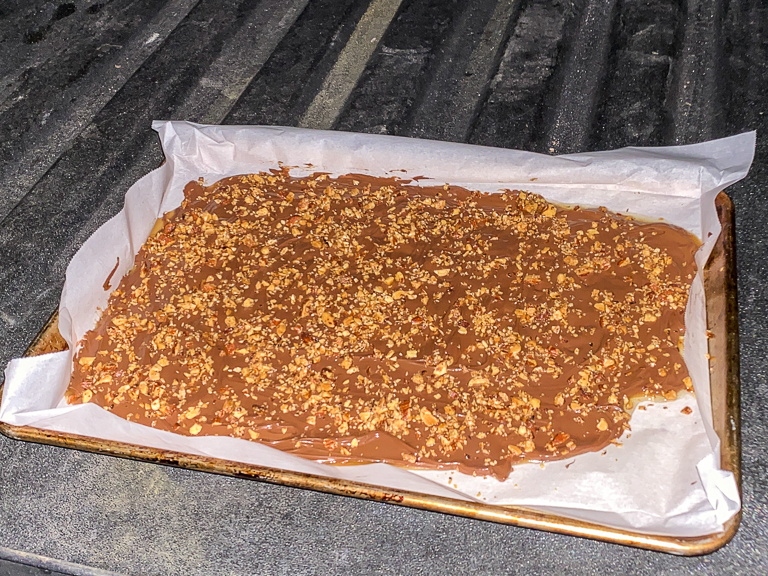 About an hour later, it was ready! 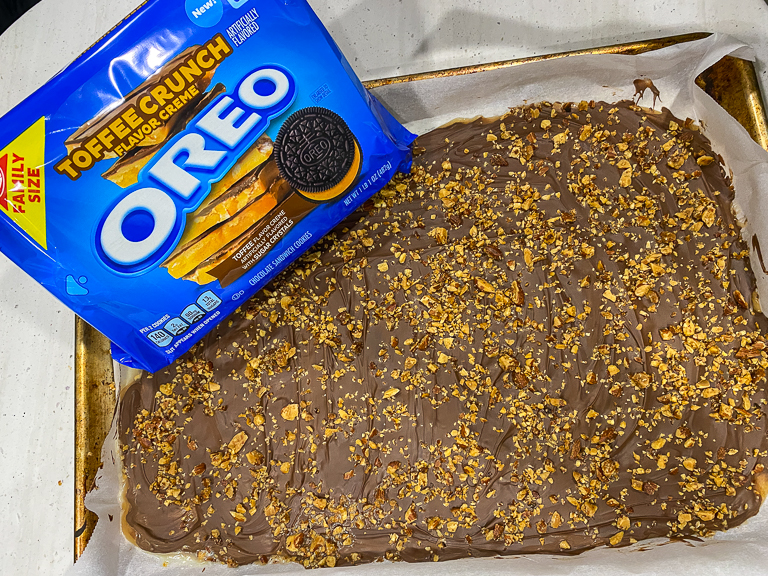 I cut the entire slab into bite-sized pieces. 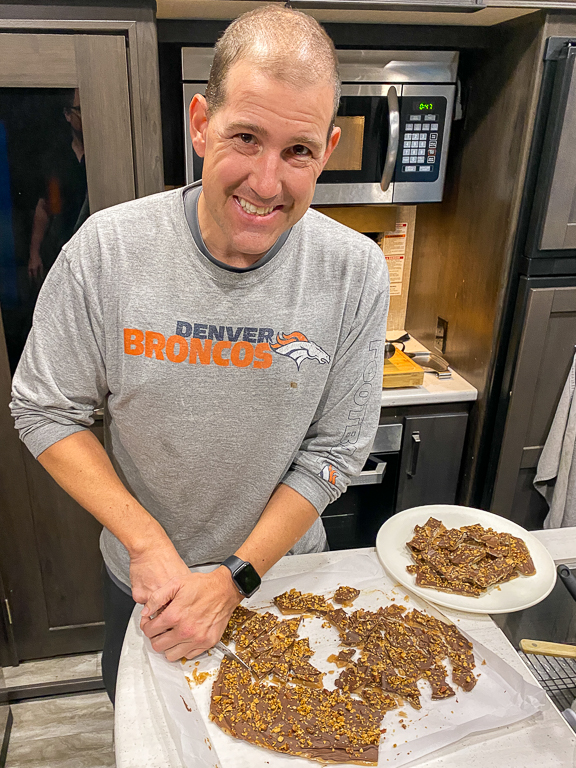 I mocked throwing all these bits away, and was immediately stopped. Theresa likes these bits even better than the chocolate and almond covered pieces.
Alright, let's give these a taste and compare them with the Oreos! 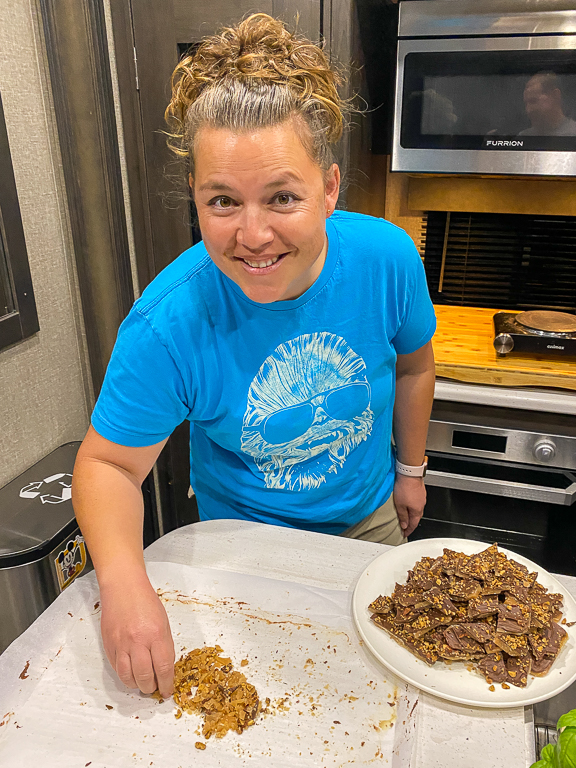 After I finished cutting the toffee, Avery said "that piece is for me" and she kept her eye on it through all the other pictures I took. Any guesses why? Because I didn't cut it down like I should have! It's 3x bigger than any other piece! 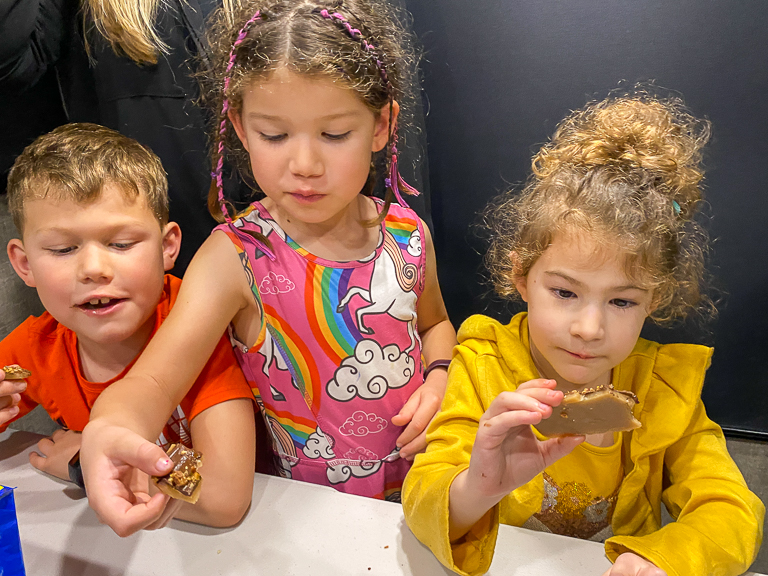 And how does it taste? 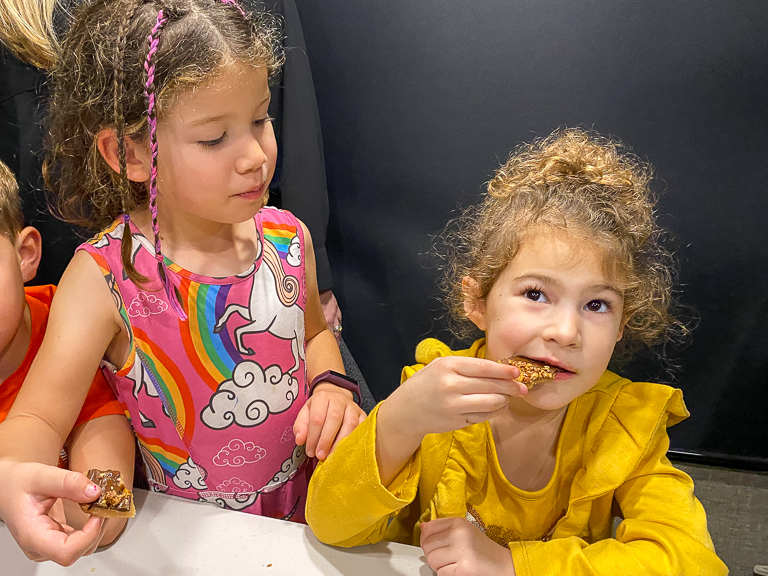 It's getting a 10 out of 10 from Megan and all the others who are trying it. I made it good this time. The toffee shatters when you bite it, and the chocolate and toasted almonds are pretty great too. This will be a tasty treat to take to the Disney. 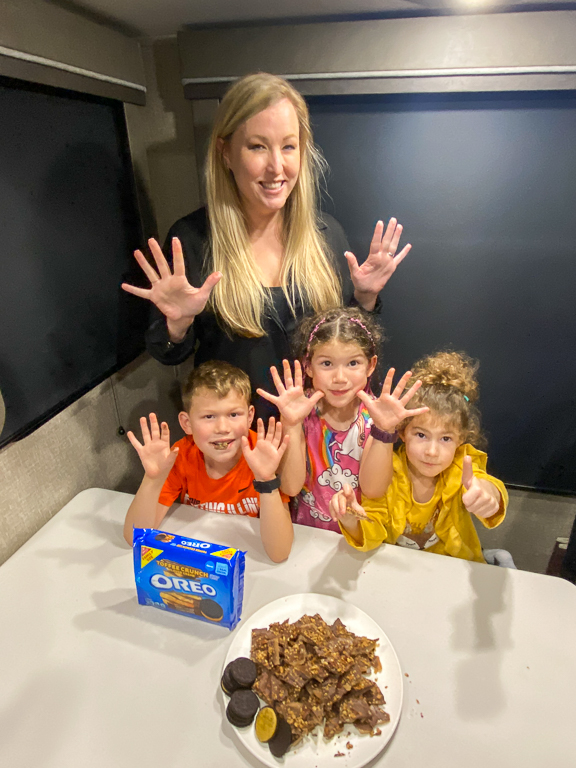 How about the Toffee Crunch Oreos? They are made with your regular chocolate Oreo cookie, but the creme filling is supposed to be Toffee flavored, and it has sugar crystals in it to give it a crunch. 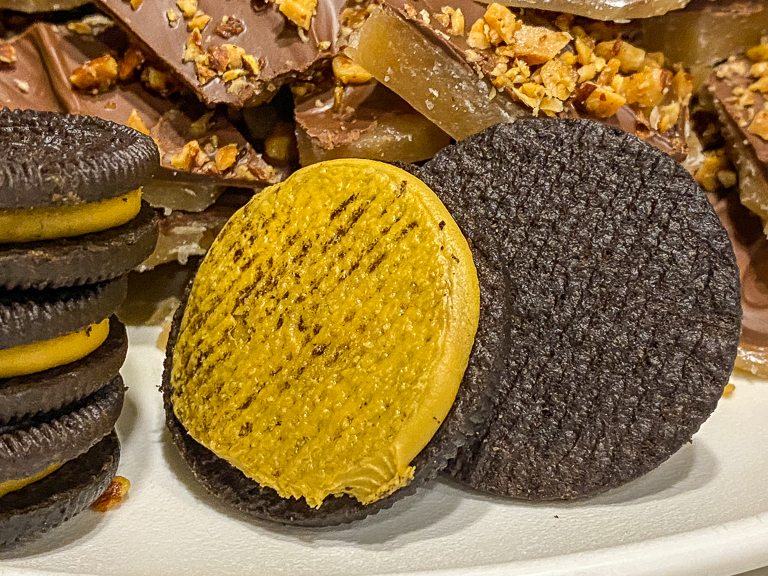 Theresa swears we've tasted something like this before. She thinks it's very similar to the Maple Creme Oreos we tried before. Smelling them, they do have a hint of maple coming from them. She doesn't think it tastes very much like Toffee. And the cookie is too dark. Maybe these would be better with a golden Oreo cookie instead? 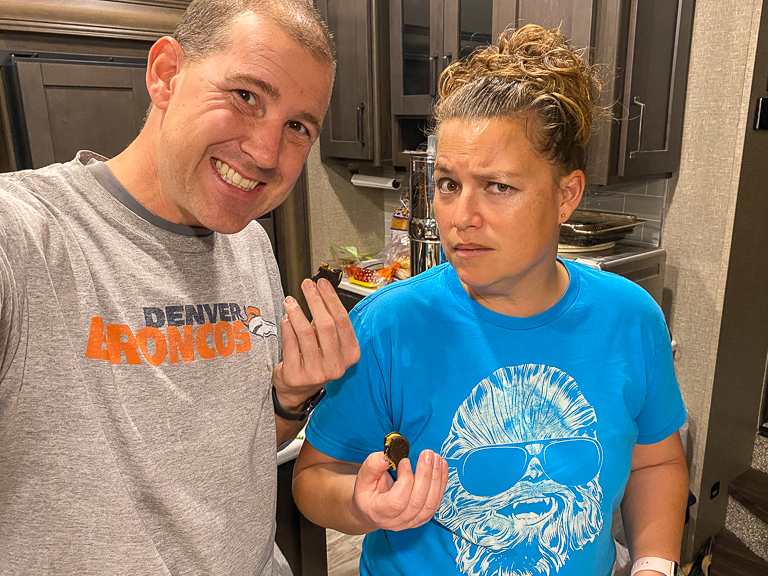 The rest of us thought the Oreos tasted good, but having the real toffee right beside it, these don't taste that similar. Still, they aren't bad. Nine out of ten from Ian. He said they're one of his favorite Oreo cookies. Alli gives them a seven. Avery is just licking her fingers and eyeballing another piece of that toffee. Yum! 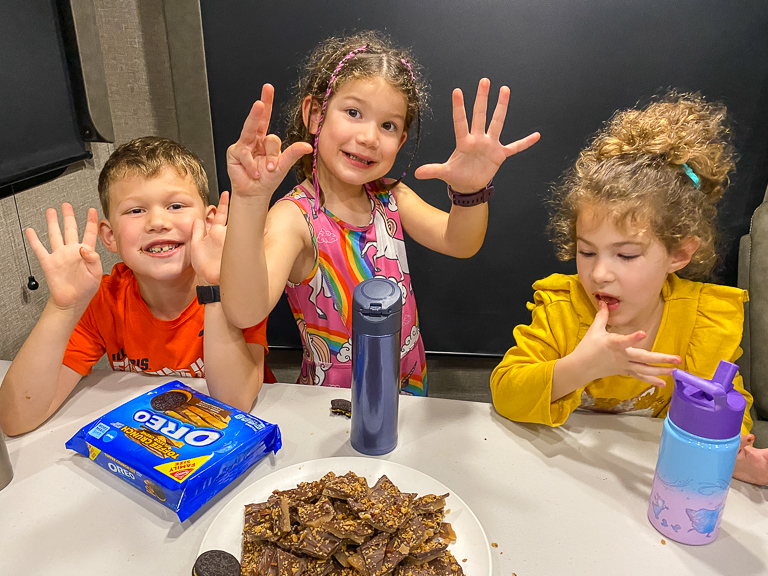