Let's have another Mountain Dew taste test! This time we're going to try Thrashed Apple Mountain Dew! And I'm glad I have my brother here with me to taste these. He loves Mountain Dew! 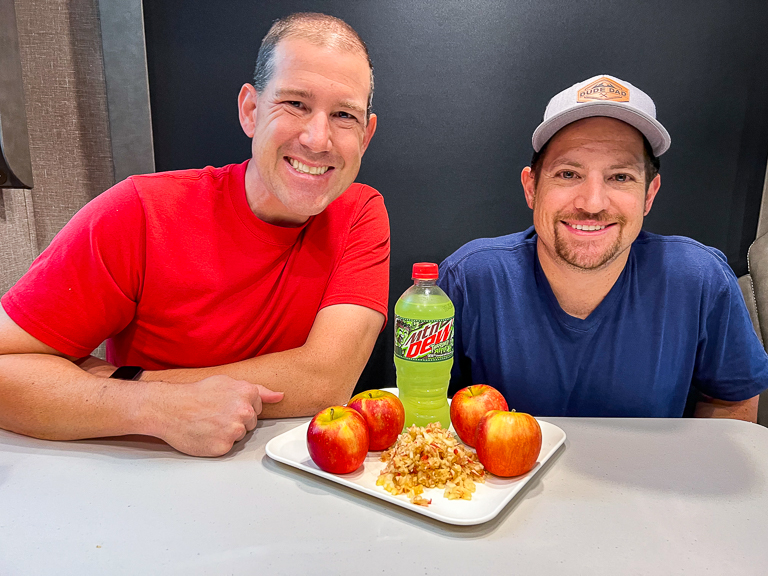 And we have to have something to compare this to. Why not a thrashed apple? 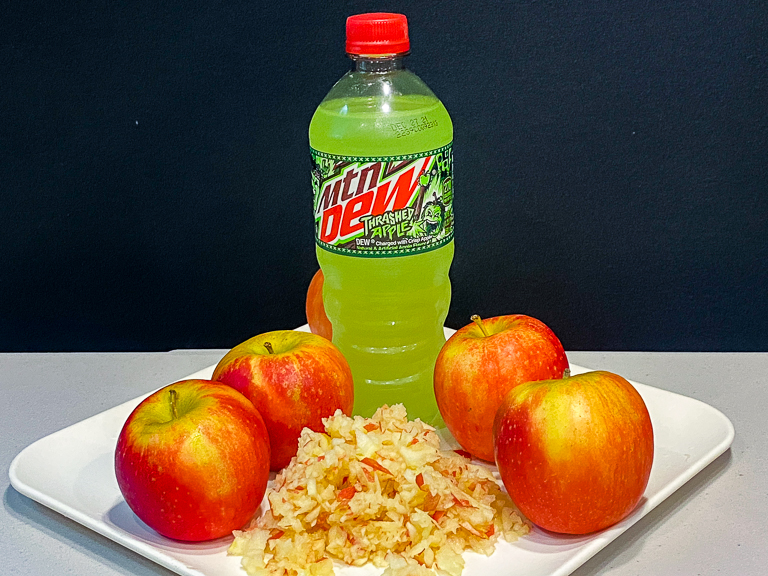 While wandering around Kroger while we were grocery shopping, Ian spotted a display and said that we had to get it for a taste test. 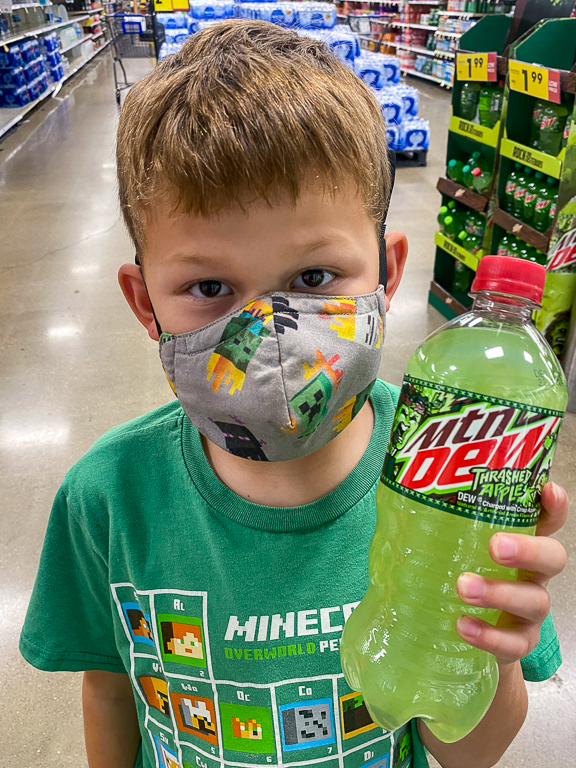 A Kroger exclusive flavor? You're right buddy! We've definitely got to try this.
The display invites us to "Rock Your Tastebuds" and we can see apples dressed like rockstars and playing heavy metal. There's a lead singer on the microphone, an apple drummer, and an apple tree on lead guitar. 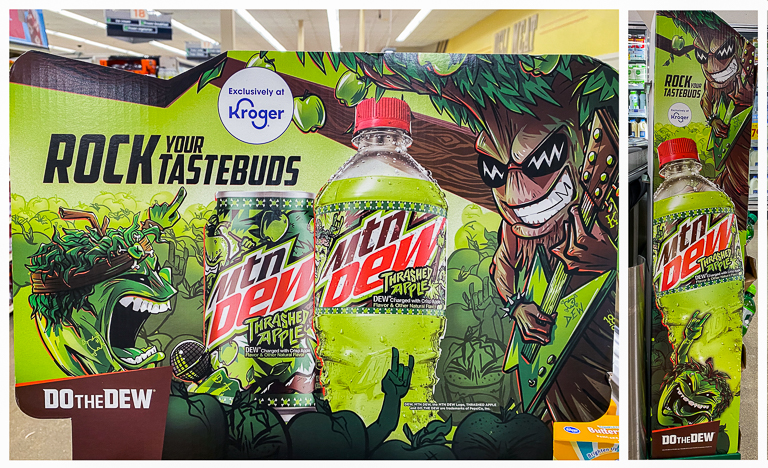 The label has similar rocking characters.

Earlier this year, when we were in New York, we stopped by Abbott Farms. There we tried my favorite cultivar of apple ever. The SnapDragon. It was developed by New York's Cornell University and they control who can grow them. When we left New York, I thought that would be the last I'd get to taste that delicious apple. Imagine my surprise and Theresa's delight when we were shopping in Orlando Florida and saw these at our local Aldi! These are the real thing! Awesome! 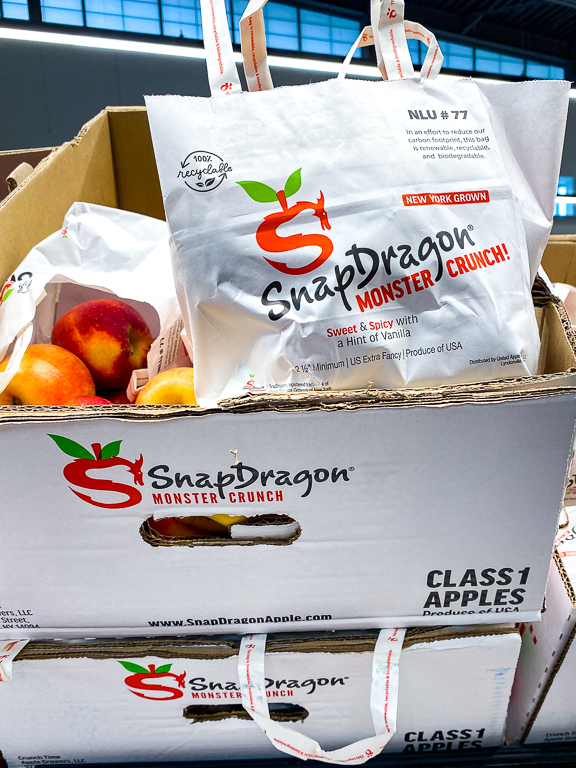 But how do you thrash an apple? I cored it, using Theresa's apple cutter. 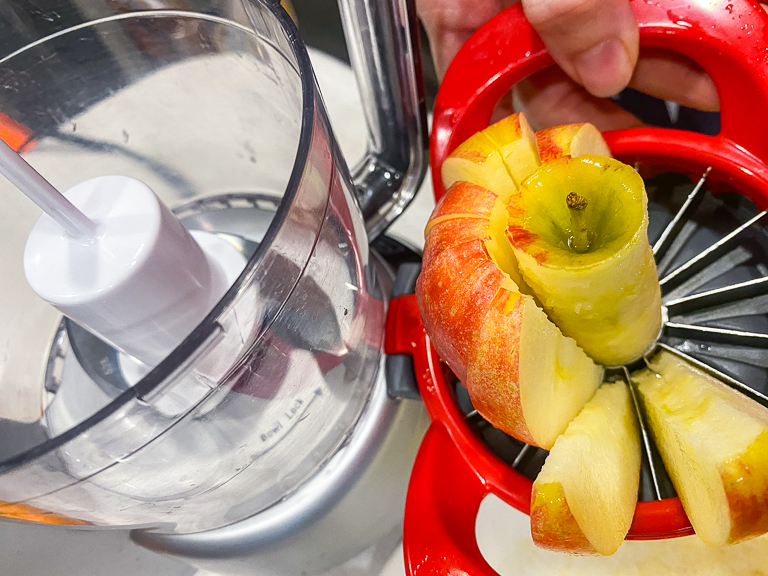 Then I put it through the food processor until it looked sufficiently thrashed. 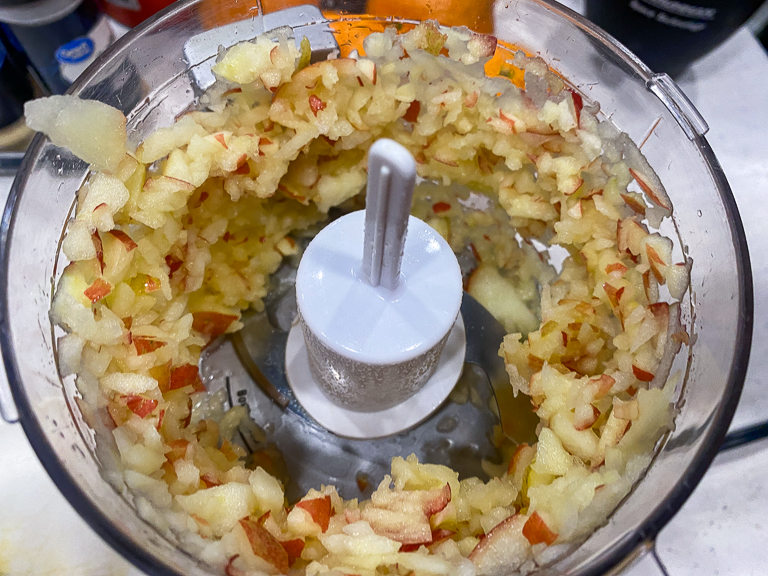 Let's get this taste test started! We'll start with the real apples. 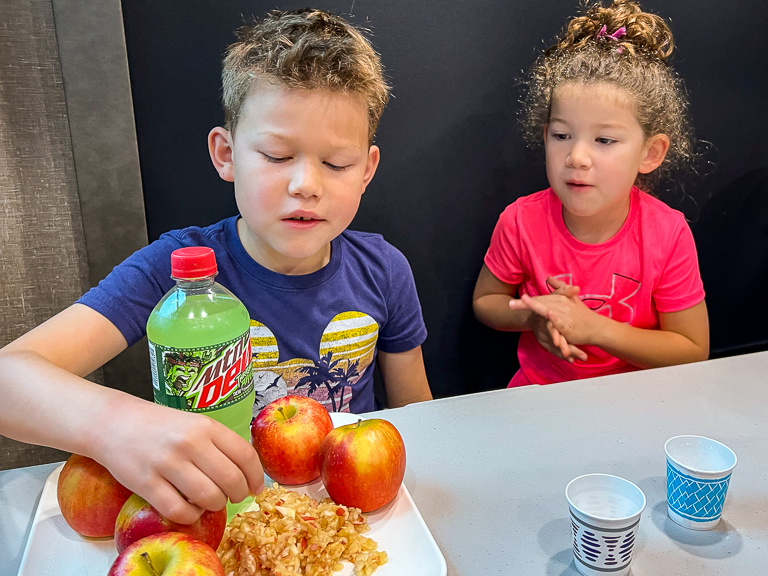 Yeah, I agree with you Ian. I don't so much like these when they are this texture. It's not apple sauce. It's not a real slice of apple. It a disappointing place in between.
Megan - I don't like that.
Patrick - Just imagine it's the inside of a McDonald's apple pie.
Nope. Not even then. 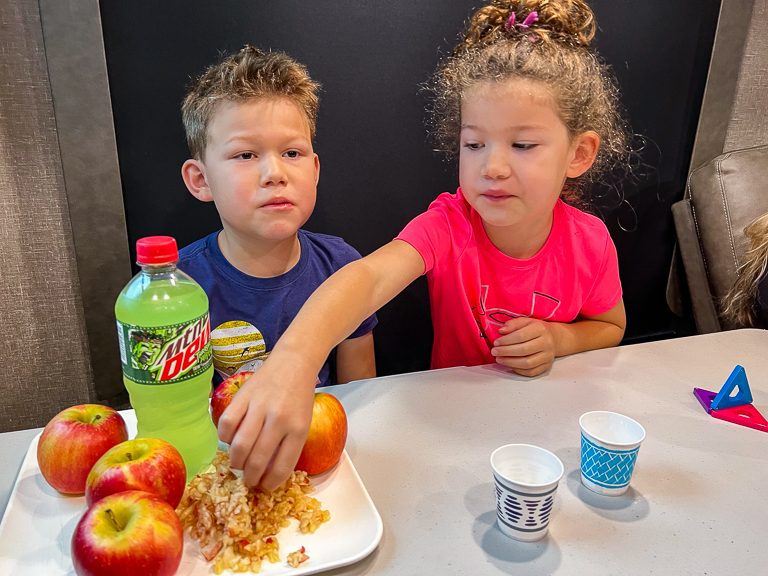 How about the Thrashed Apple Mountain Dew? I bet it's going to taste like fake apple. Ian's going to love it.
Ian - Oh yes! It taste's like the Skittles! That's the best one so far!
Alli - I like that! Yum! Yum! Yum!
Patrick - I think it tastes a little more like Green Apple Jolly Ranchers. 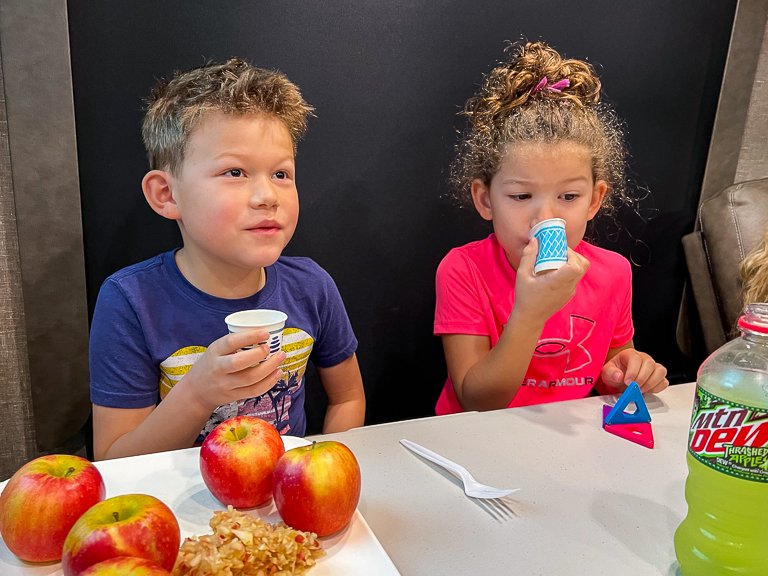 Ooh, big thumbs up from Avery. 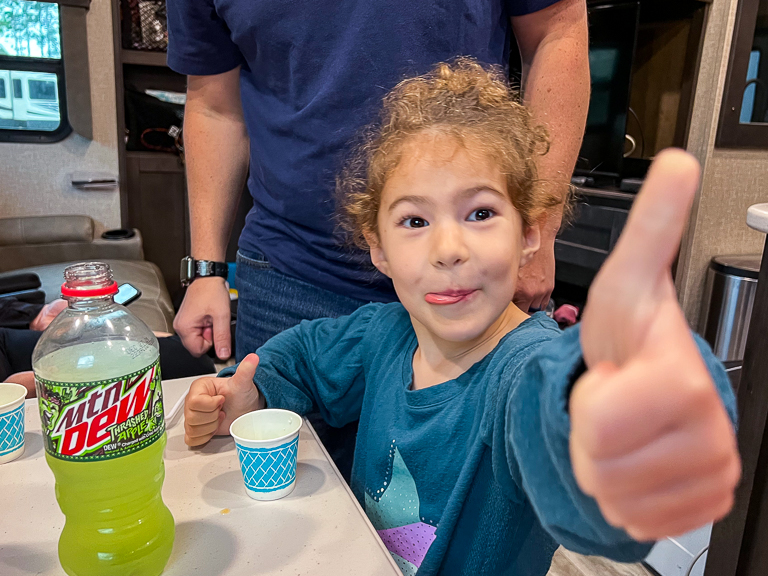 Theresa?
Oh my. That is not a happy face.
So Thrashed Apple Mountain Dew tastes like liquid green apple Jolly Ranchers. If you're a green apple fan, maybe you'll like this one. If you're not a fan, well...
Megan - This is the worst.
Theresa - And it tastes like medicine too! Why do they make Mountain Dew taste like medicine? It's like high calorie medicine!
Megan - I wonder how many calories are actually in medicine? 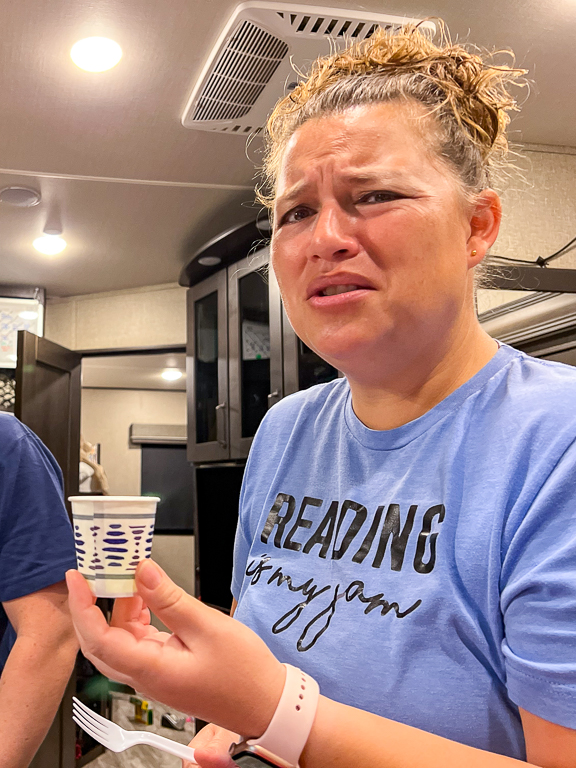 The kids loved this candy flavored soda. The SnapDragon apple, we're not going to try thrashing them again, but we'll be eating slices of them for as long as we can find them in the grocery stores. 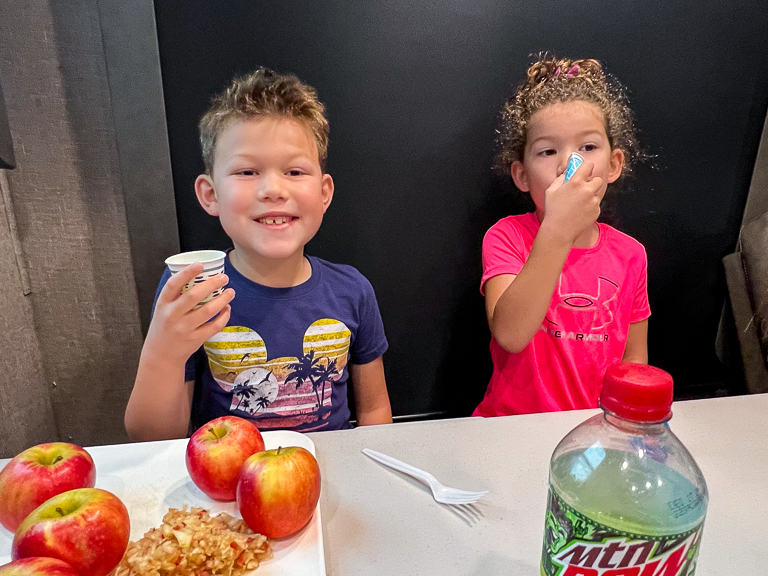 This is the second out of three Mountain Dew taste tests I'll be doing while my brother is visiting. 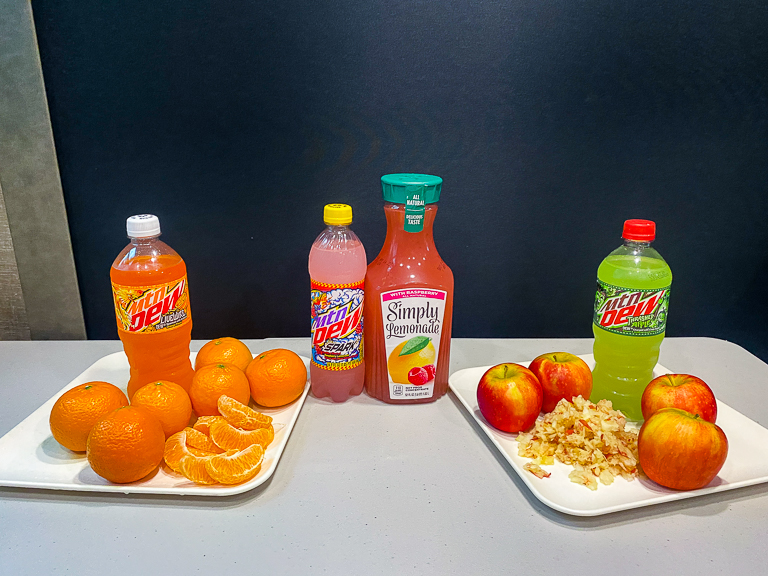