Yesterday Theresa made me a delicious Loaded Baked Potato Soup trying to recreate the soup from Stuart Anderson's Black Angus. It was so good! Now it's Sunday and it's pizza day and I need inspiration for what I can make this week that is new and exciting. Well, why not make a pizza inspired by that same soup? 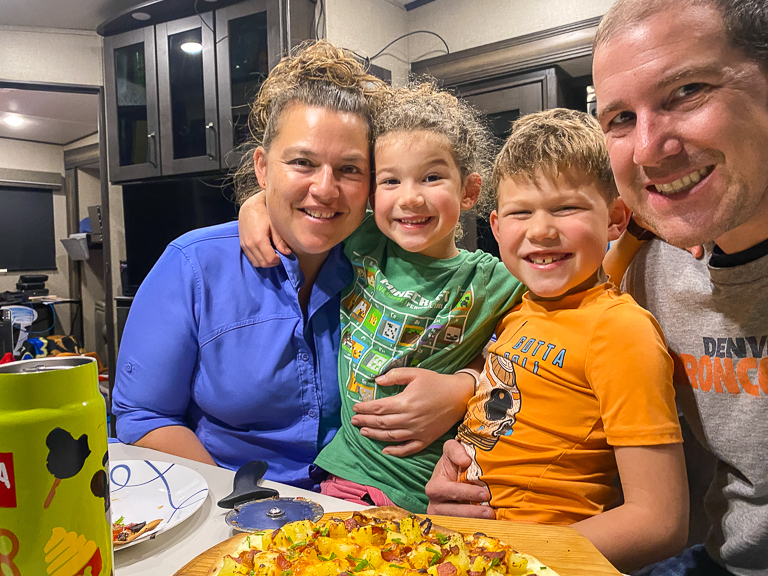 Today's pizza has all the flavors you're looking for when you get a warm hearty bowl of Loaded Baked Potato Soup. Sour cream, potatoes, bacon, cheddar, and even chives. 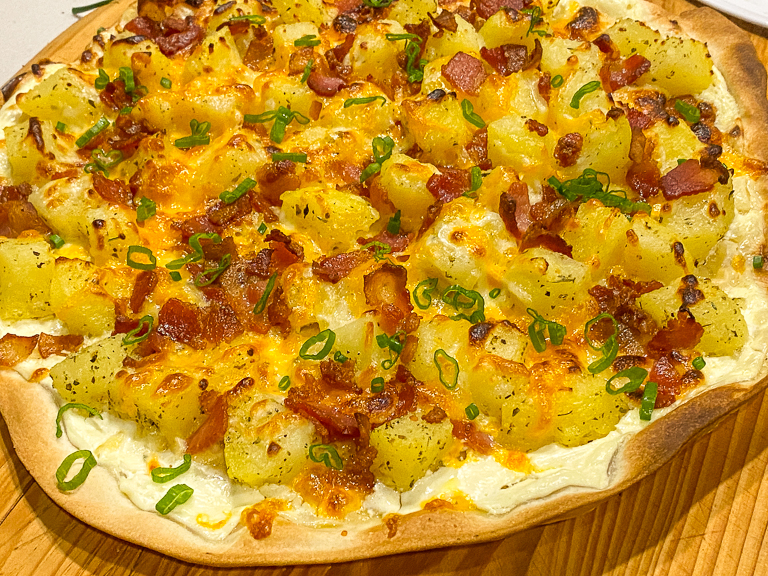 It starts with the thin crust dough. I think that's week 4 in a row of Thin Crust pizza. After making it per the recipe a few times, now I'm starting to experiment. Today, I'm making it a little more dry, in the hopes that it will crisp up faster and be easier to slide off the parchment paper. 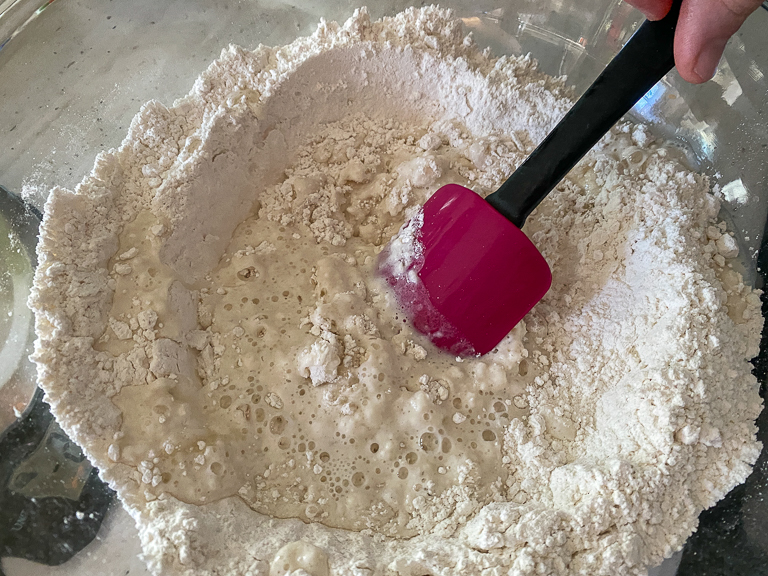 If it's loaded baked potato soup pizza, of course I'm going to need to start with baked potatoes. I cooked a couple, peeled the skins, cubed them, and set them aside to cool. 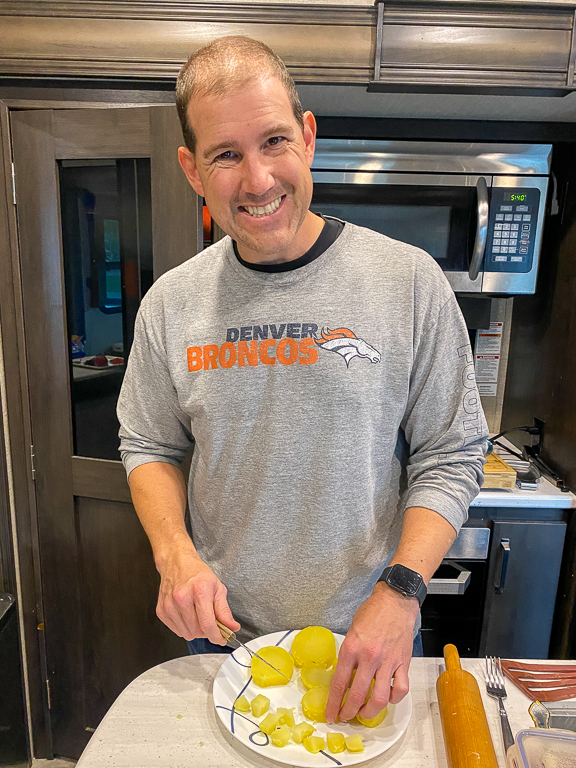 These are getting tossed in a bowl with butter, garlic, and Italian seasoning. 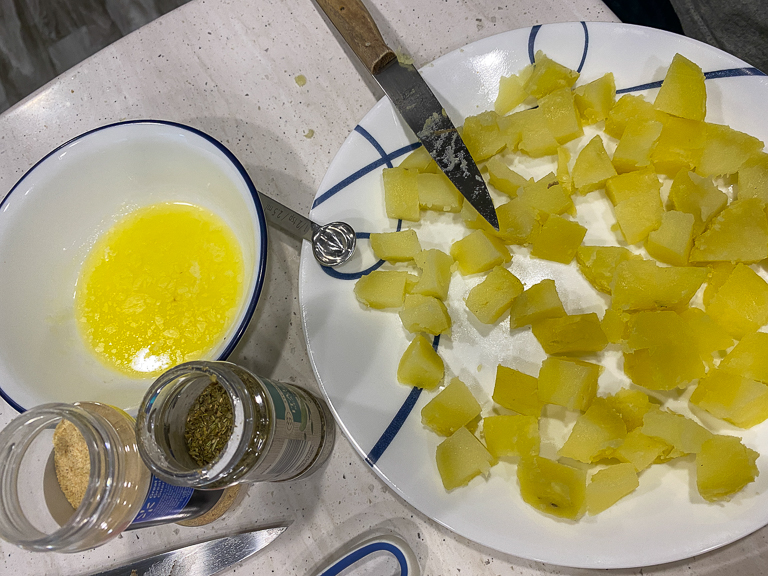 And no bowl of potato soup would be complete without crispy bacon to go on top of it. 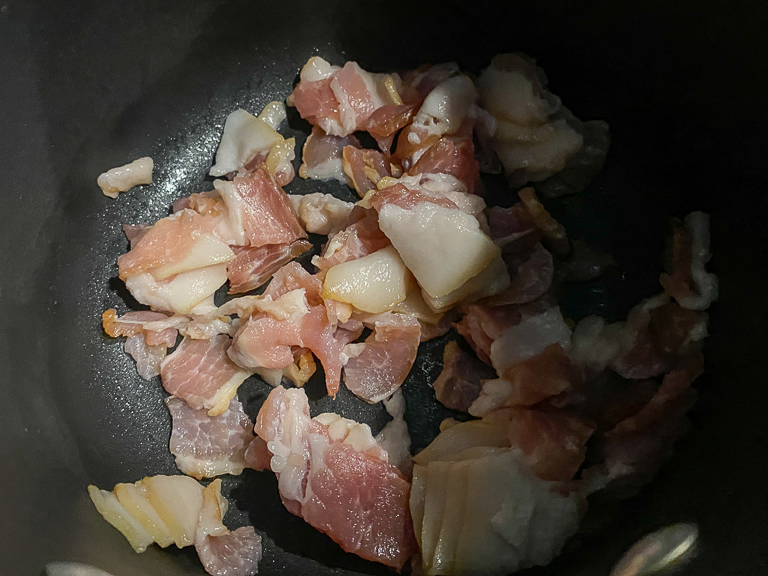 I rolled out my thin crust pizza dough as thin as I dared. This week, I'm using a base of sour cream. I've never used a sour cream base before, so I hope it can hold up to the high oven temperatures. 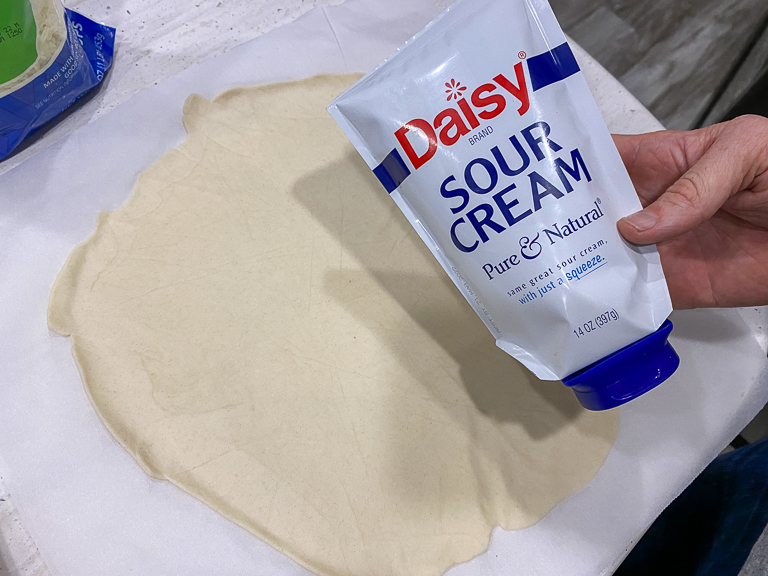 That gets topped with my seasoned potatoes. 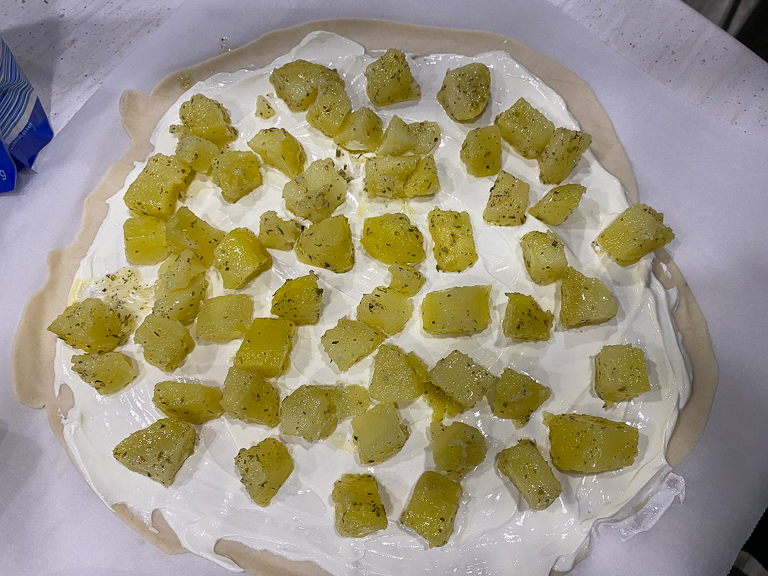 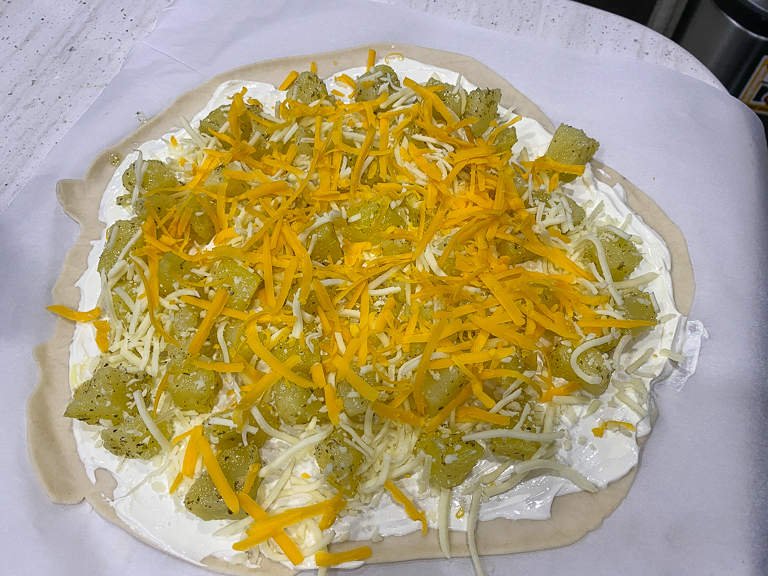 And finally the bacon. I don't know how this couldn't be delicious. 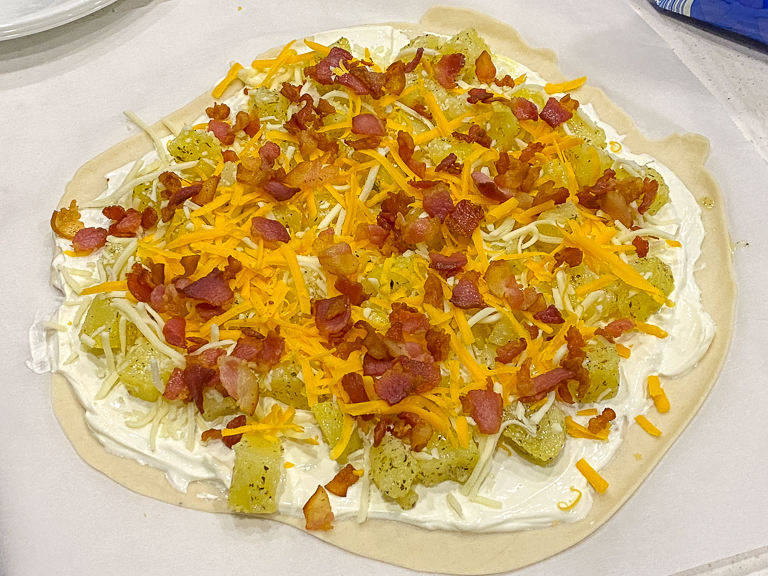 After an 8 minute bake at 480F on a pizza stone in the oven, this pizza is ready to eat! I topped it with chives for decorative purposes. It smells awesome. 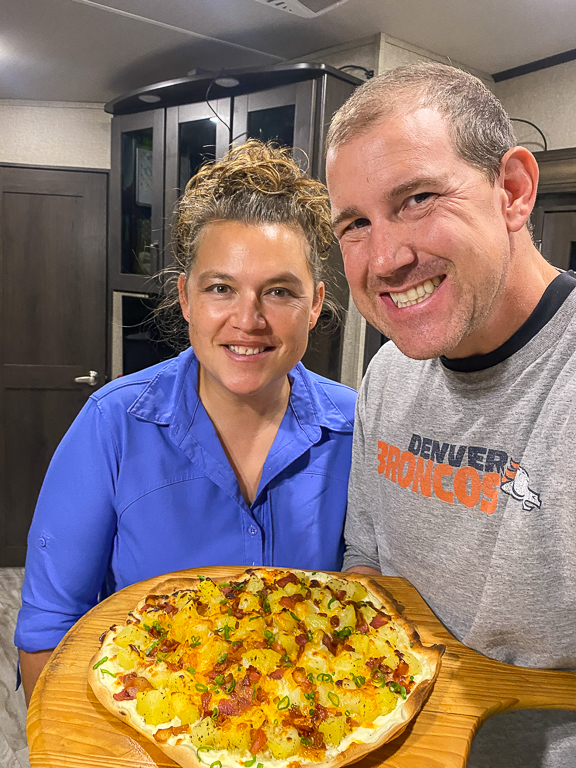 But that's not the only pizza I made. The kids love Thin Crust pizza so much that they each get their own.
Ian, are you sneaking pepperonis when you've got a whole pepperoni pizza right in front of you? 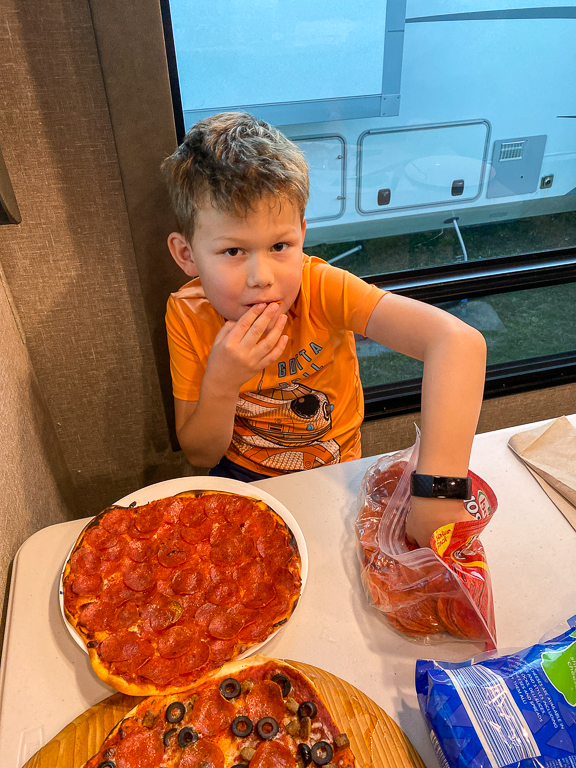 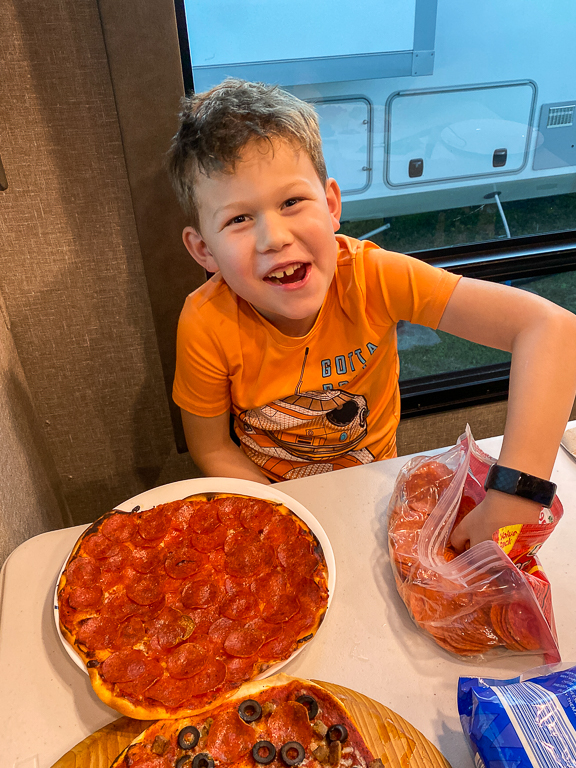 They both did a great job of demolishing their pizzas. Alli is experimenting with toppings again, going for pepperoni, sausage, and olives. She was sad we didn't have any mushrooms in the fridge. They both liked basil on top of their pizzas. 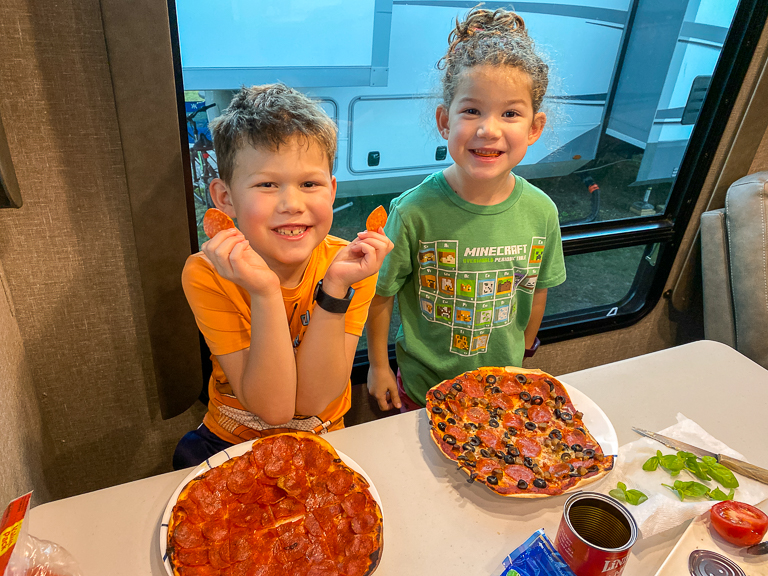 Our poor basil plant is having a hard time keeping up. I think we're going to have to give it a rest, or at least get it a friend, if we're going to continue having basil on our pizzas each week. 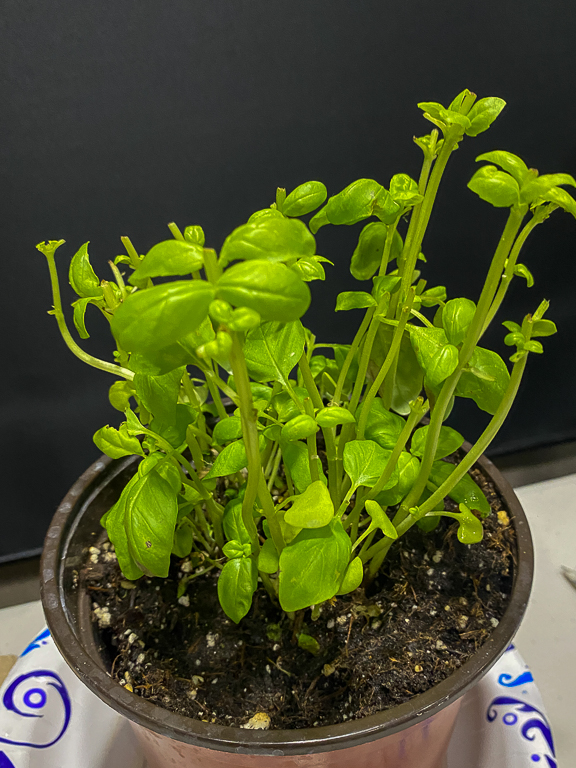 Speaking of our pizzas. 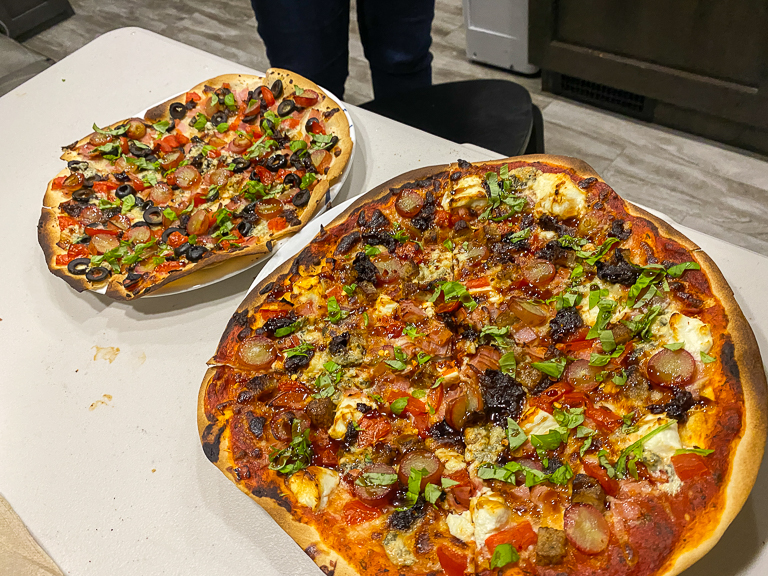 When it's thin crust pizza, it's really all about the toppings. These aren't your standard pepperoni pizzas. They have lots of bold, flavorful toppings. 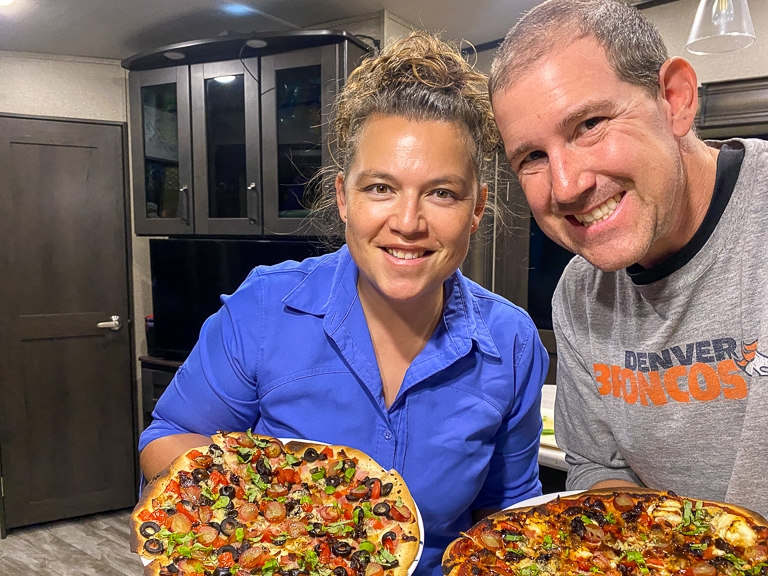 Theresa said "Check this out". That's an impressive pizza slice. Theresa was starting to get tired of the regular pizzas, but these thin crust pizzas have rekindled her love of pizza nights. 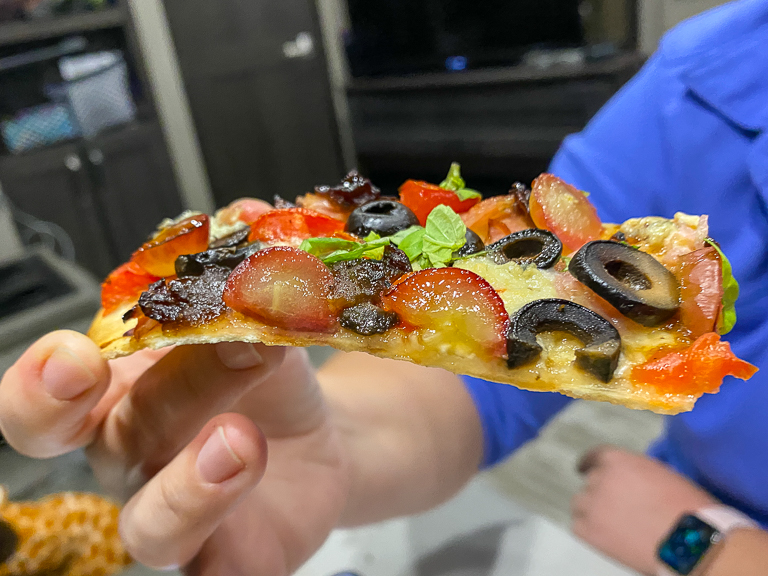 And the Loaded Baked Potato Soup pizza was delicious! It's got all the flavors I was looking for. Those potatoes can hold the heat! They were almost burning my mouth as I ate them.
Theresa suggested maybe adding a layer of scrambled eggs to the bottom to make an awesome breakfast pizza. Maybe we'll have to try that in the future, but this one was great! 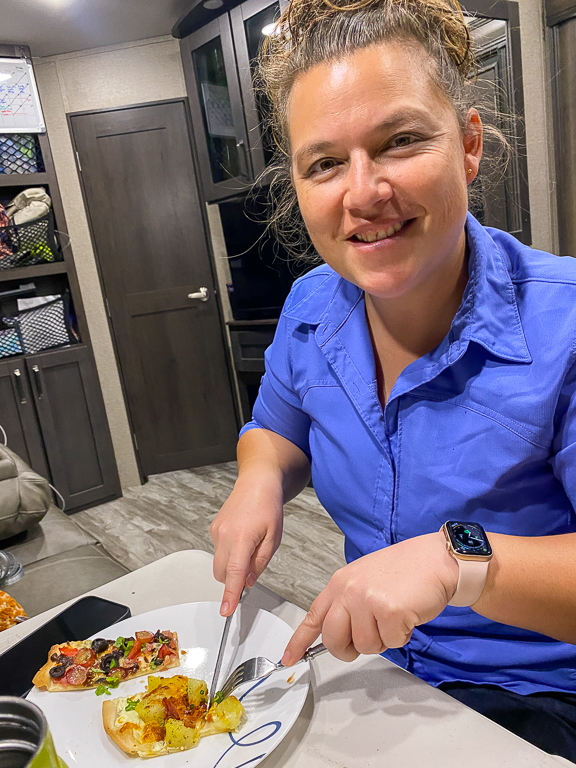