Today we're taking a trip over to the Magic Kingdom! It doesn't matter that we're starting our day here after 1pm. We'll still get plenty of fun stuff in. We enjoyed taking the ferry over the last time, and it was just about to leave this time. As soon as we boarded, they pulled the ramp and we were off! 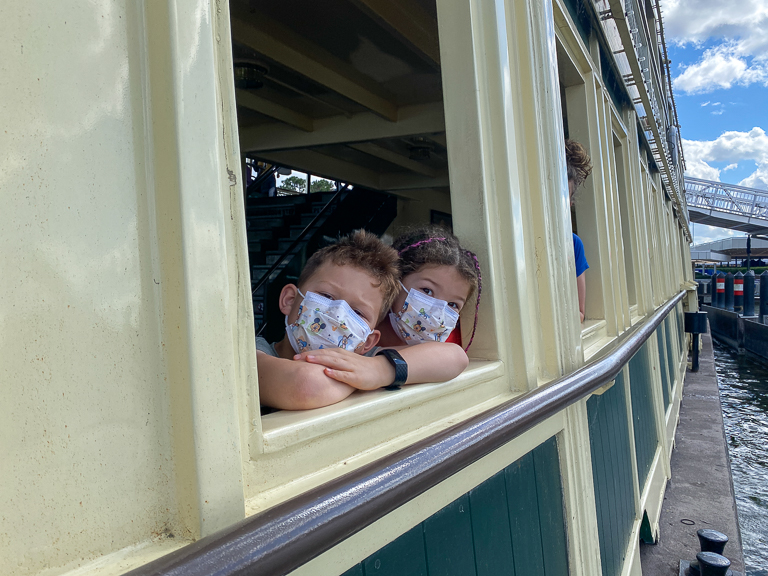 Despite being a Thursday when it's not supposed to be busy, the park was really busy. We started by riding the Carousel of Progress, and when we got off, Buzz Lightyear had just returned from an extended down time. The wait time showed 25 minutes, but we walked right on! Hooray! 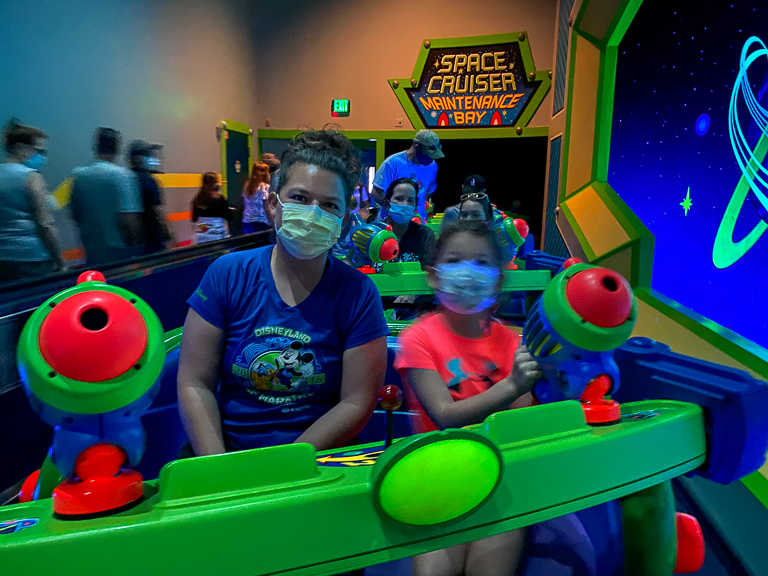 The version is unfortunately inferior to the Disneyland version. The guns are fixed, so it's a lot harder to aim them. Also, the targets are all identical. There's no shapes that indicate which targets are worth more points. 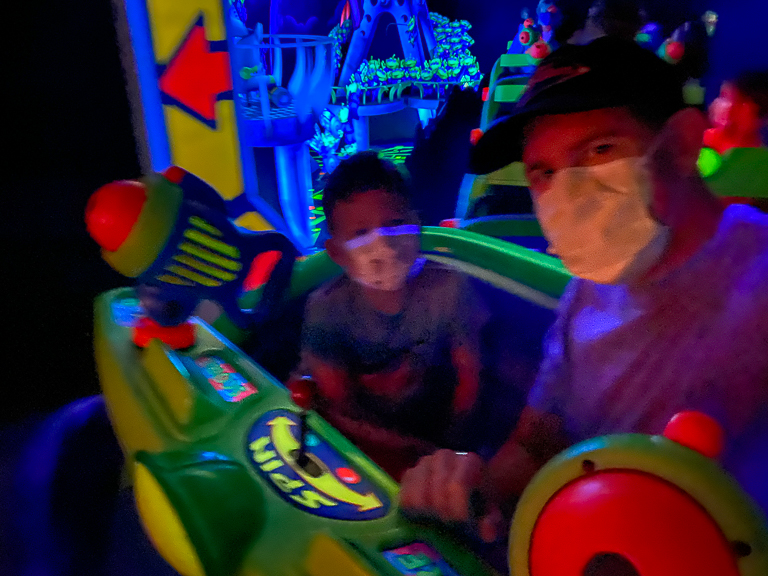 I'm glad we caught this when the line was short. Many other times, we've seen it pushing 50+ minutes! 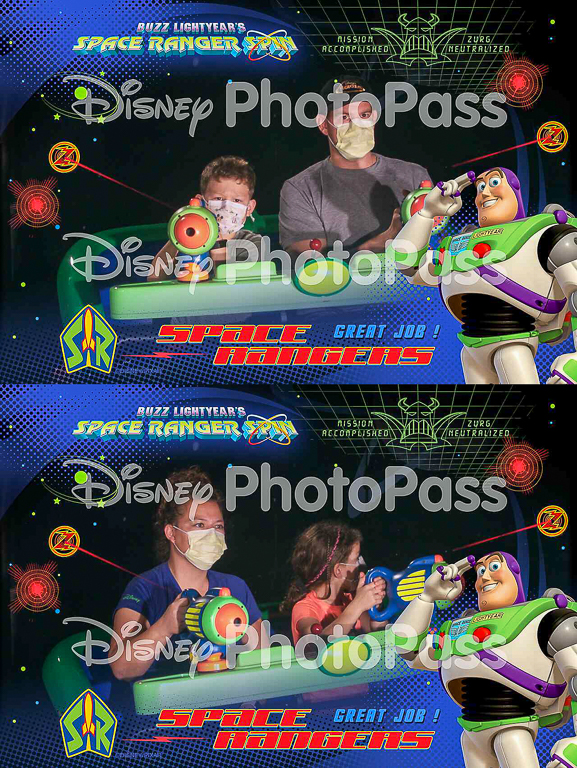 Since things are busy, we chose to do things that wouldn't be much of a line. We'll be exploring Tom Sawyer's island for the first time with the kids. We packed onto a raft and motored our way over to the island. 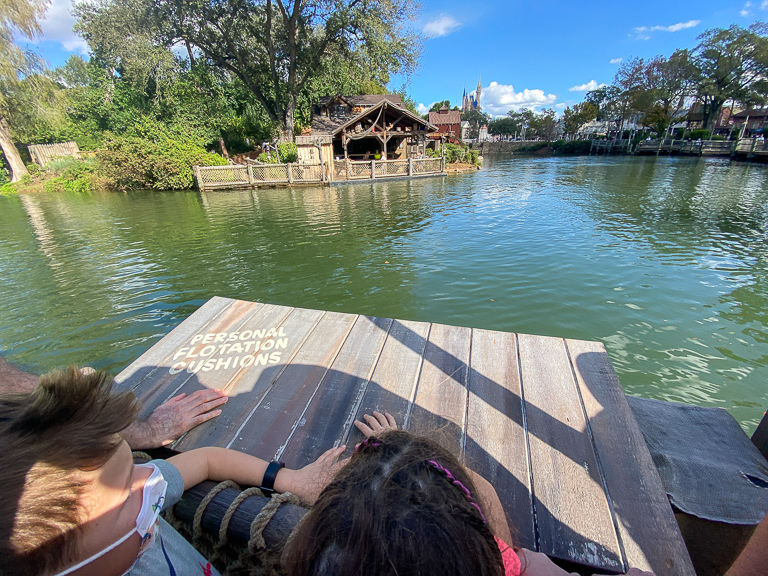 Checking out the map to see all the different places to explore. There's caves, mills, bridges, and a fort! We explored the caves to see what all we could see. They aren't good for those afraid of the dark, or those who are claustrophobic. In one of them, we even found jewels! 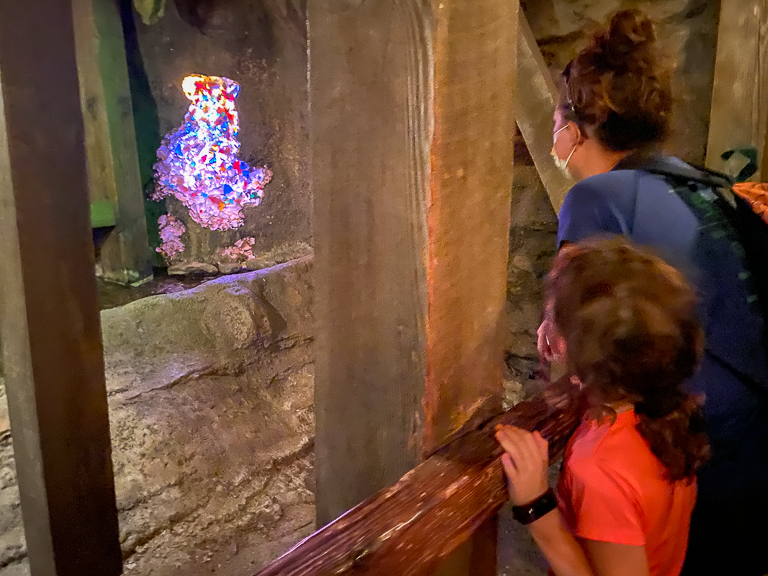 Over at the fort, the bottom level has different animatronic animals, like horses. There's an entire upper level with different gun nests where you can look out at the Rivers of America and fire guns towards it. 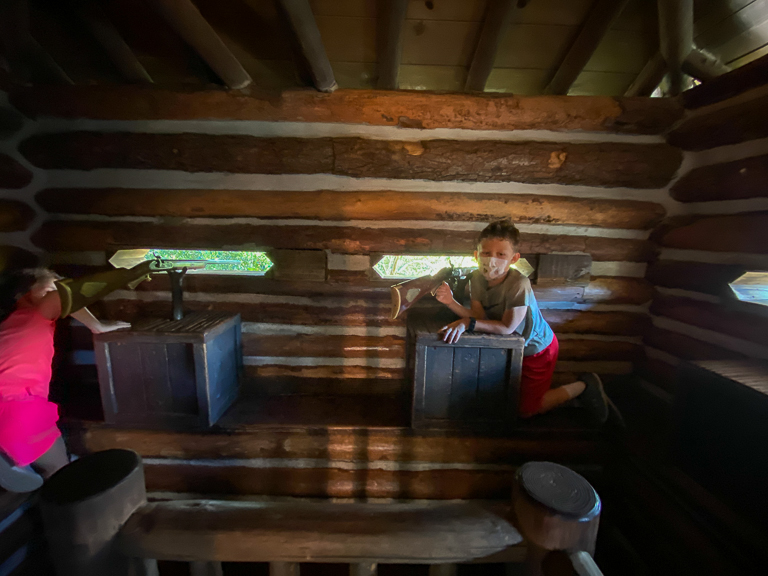 These kids must have been naughty. They belong in the stocks. 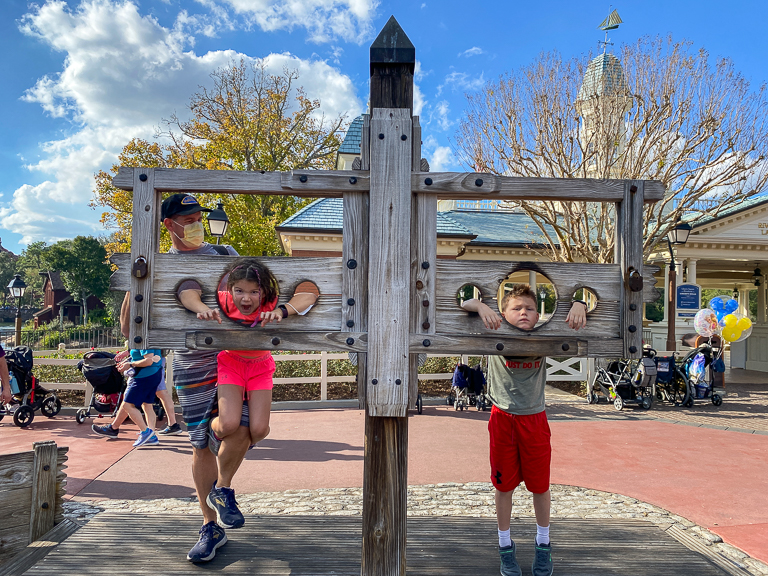 Looks kind-of similar to another kid I recognize in that same position. (Yes, that's me) 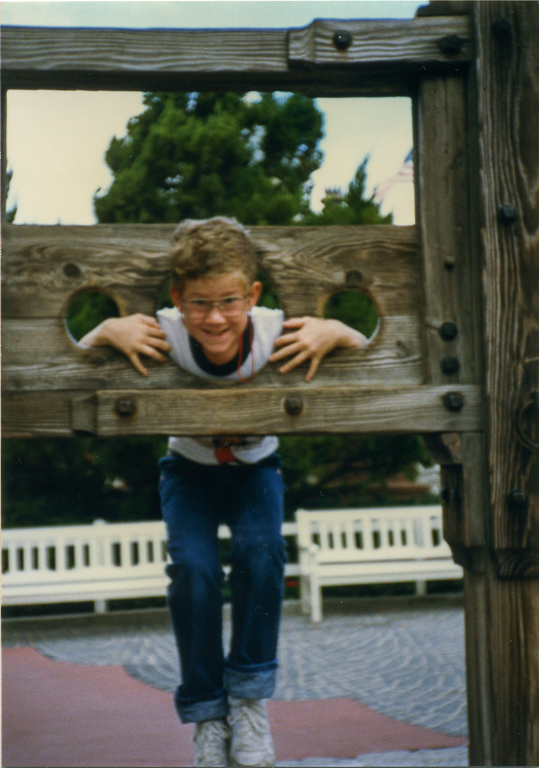 The Flowers look beautiful. Gotta take the time to smell them. 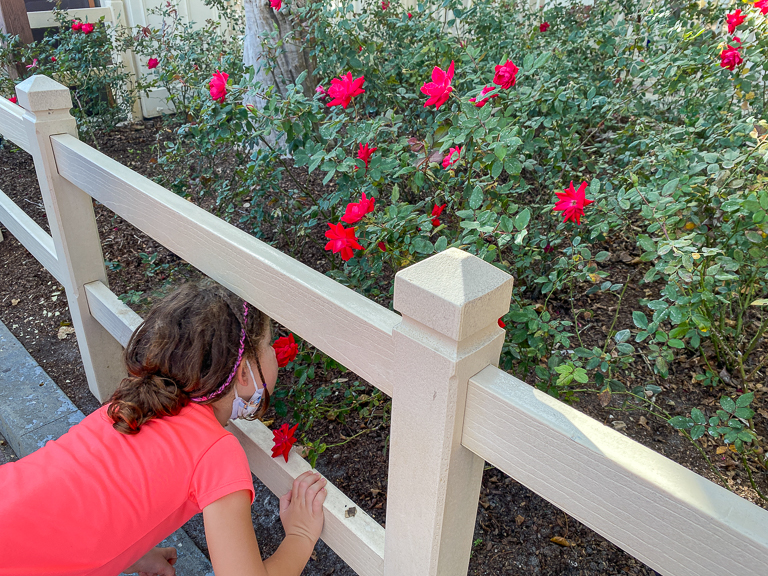 The carrousel wasn't too long of a line. We found an inside horse and took a ride on it. 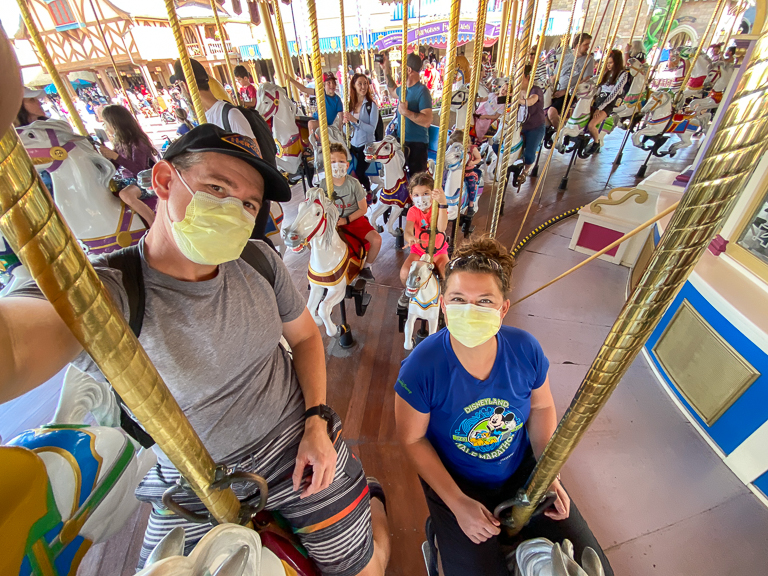 Time for a treat. We stopped for popcorn, but while we were in line, Alli and Theresa saw someone walking with this massive pretzel! They asked where they bought it, and heard it was just around the corner.
They're using their Christmas money from Aunt Megan and Uncle Patrick to buy some tasty snacks. Ian got a Mermaid Slushy because it has two of his favorite flavors mixed together, blue raspberry and green apple. Plus there's a chocolate mermaid tail and whipped cream on top.
Alli got a giant pretzel that's bigger than her head! 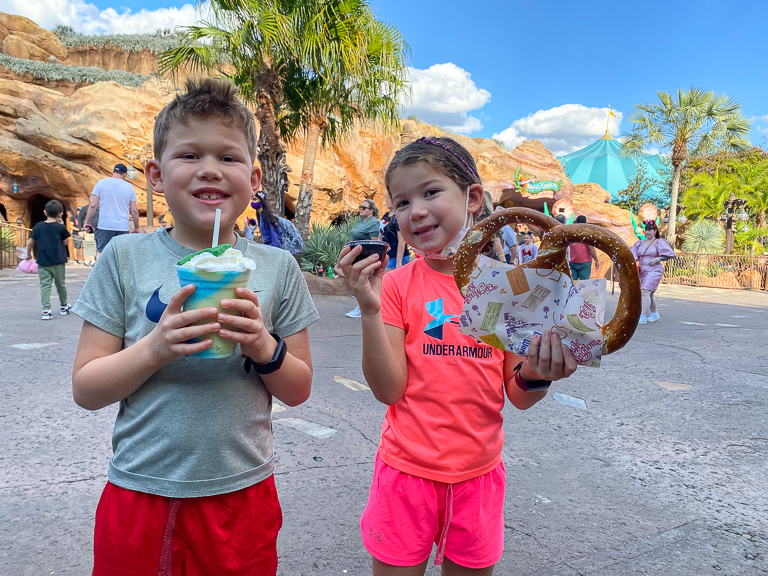 The cheese sauce we paid extra for was a bit weird though. Though the flavor was okay, the texture was really grainy. We were expecting the plastic nacho cheese sauce, so this was odd. 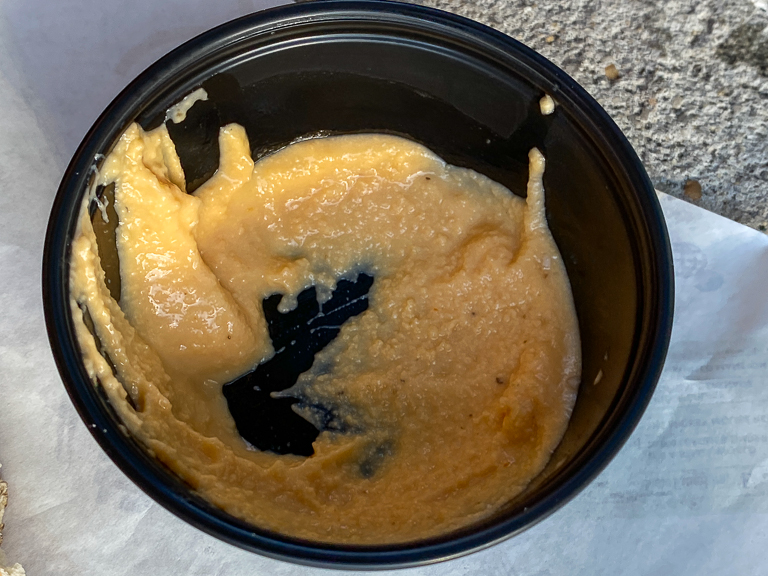 There's still long lines everywhere? At some point while we're here, I'm going to get the family to the Hall of Presidents. We were one of the last to enter the theater, so that was really good timing on our part. 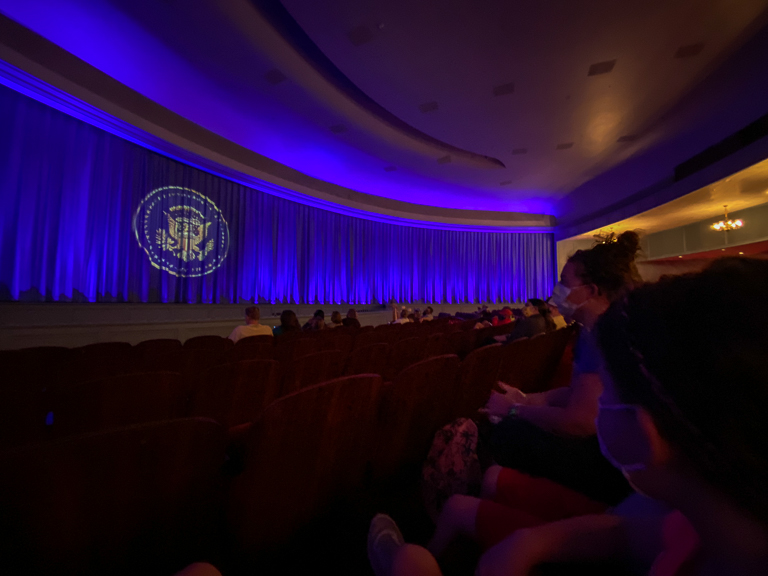 Theresa says she's seen the whole thing before, but I'm not so sure. Usually she falls asleep. 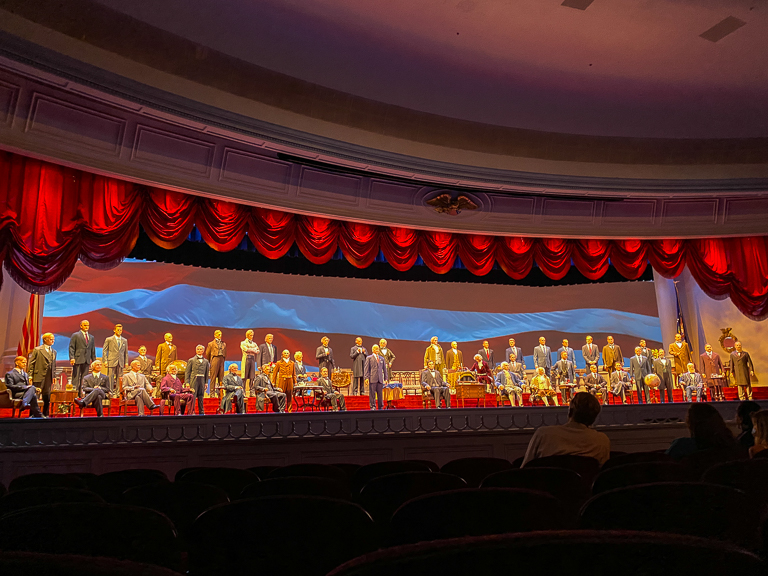 The Big Thunder Mountain Railroad posted a 45 minute wait. Might as well go for a ride, then have some dinner. Hopefully after dinner things will have settled down a bit and lines won't be so long. 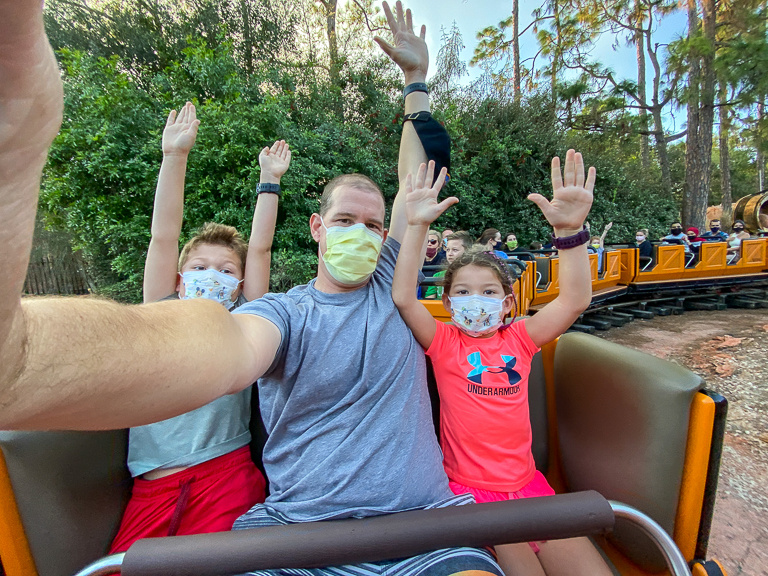 After a dinner of chili dogs, it's time to go on as many rides as can before the park closes! We'll start with Goofy's Barnstormer! 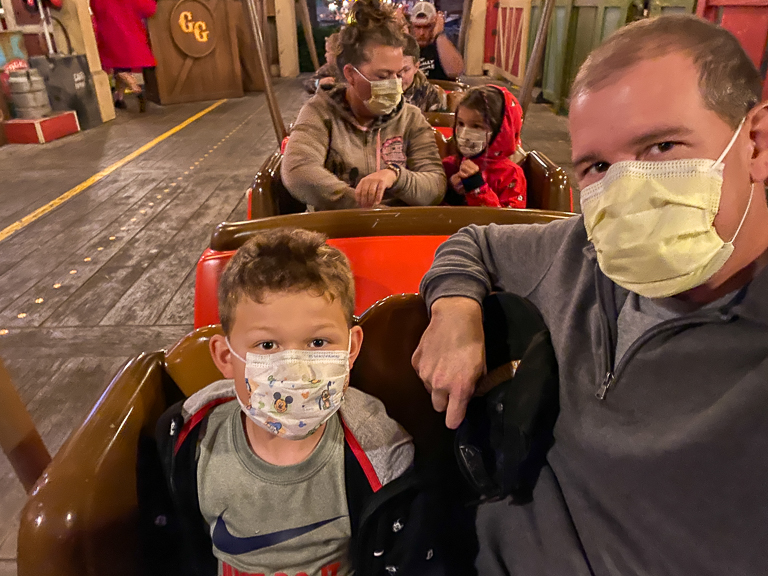 Then take a ride on it's a small world. And can you believe we haven't gone on The Haunted Mansion yet? Usually the line for it would move pretty fast, but this whole Genie+ thing has messed things up. I regularly see the line stretching outside the queue to the Hall of Presidents and wait times at 60+ minutes. This time though people have started lining up for fireworks, so wait times are starting to get better. 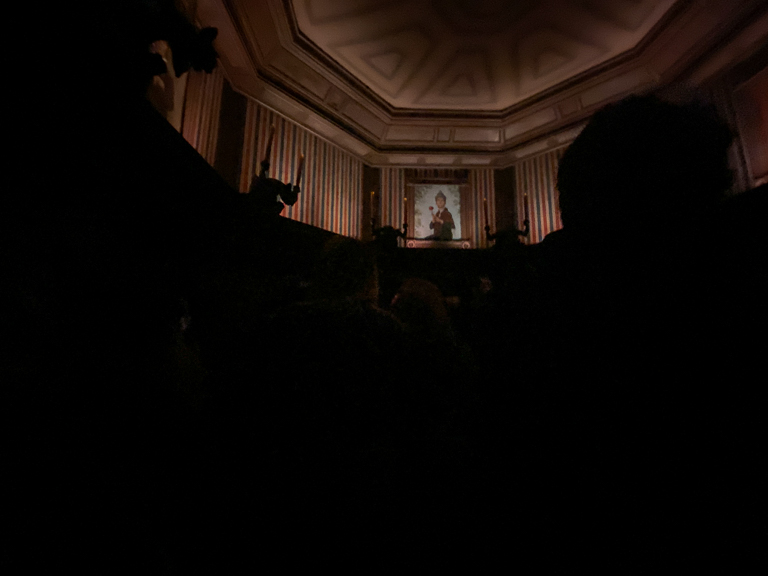 And we can also go on rides like Space Mountain! 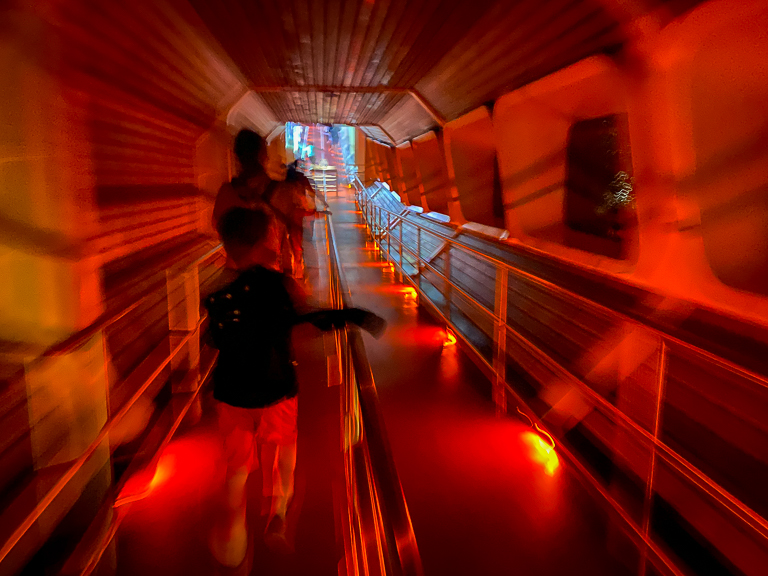 The kids are loving the coasters. I'm glad I have buddies that are tall enough to ride now! 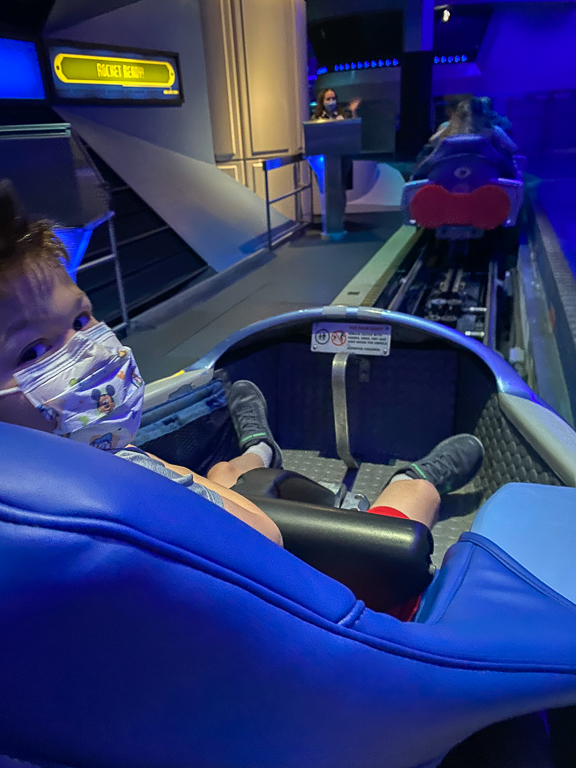 As the fireworks were going off, we hoofed it over to Peter Pan. 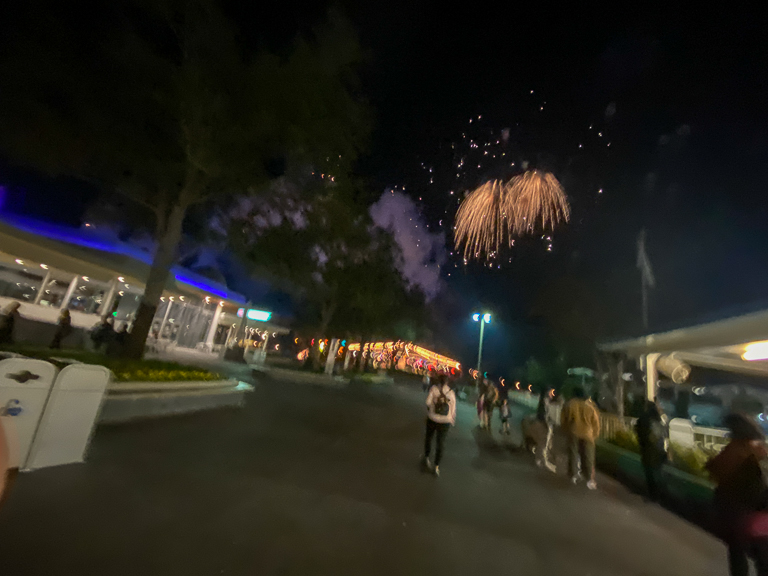 We arrived just as the fireworks ended. The wait time on the front of the building was still showing 65 minutes. 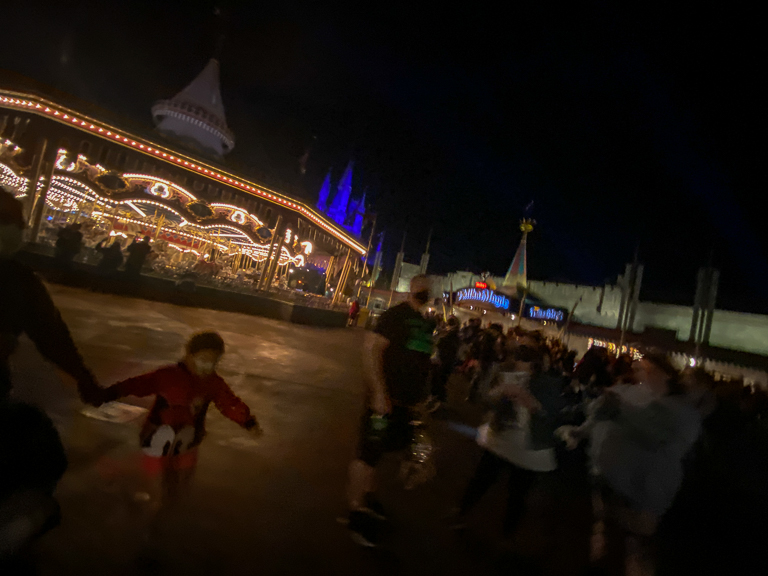 But as we walked through the queue, it was clear there wasn't much of a line. In fact, we walked all the way to the front without stopping! That's as good as we're ever going to get here! Right when we got off, the fireworks were over and the Peter Pan queue was still trying to absorb all the extra people. The line was backed up to Mickey's Philharmagic. This was a great time to go! 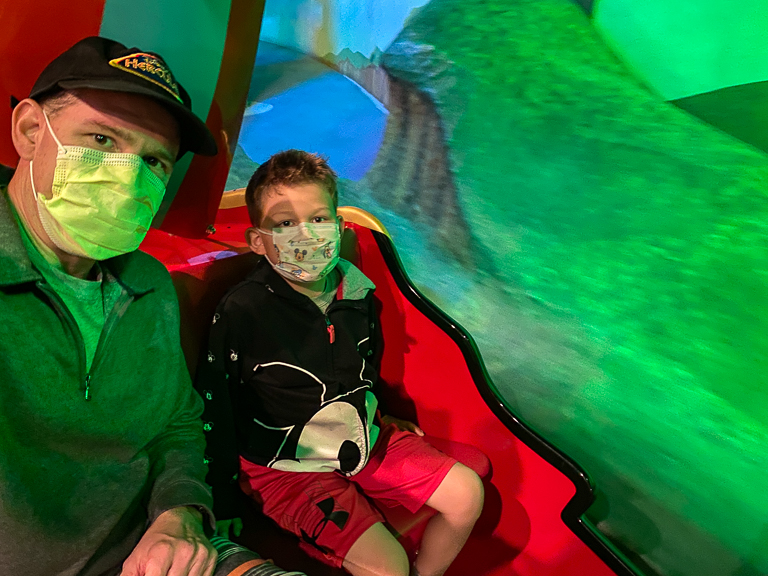 With short lines and under an hour before the park closes, we rode Mommy's favorite ride if we were in California, Winnie the Pooh. 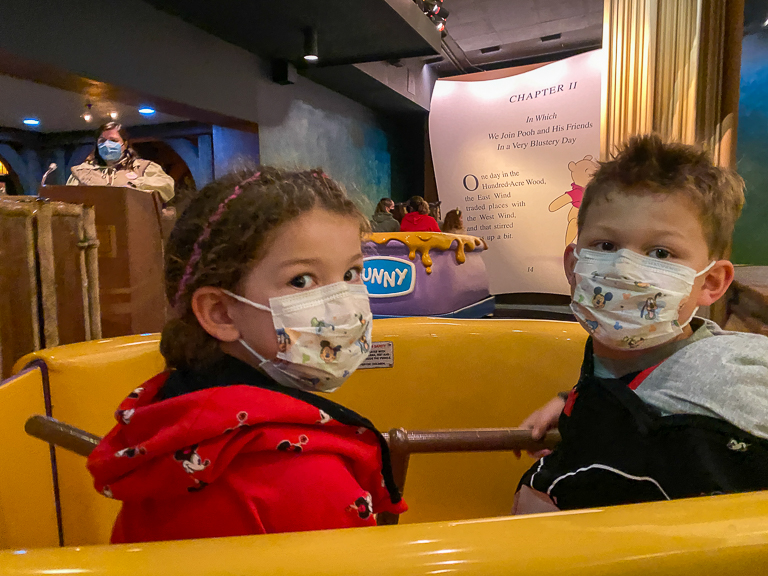 Then took a couple rides on the teacups. 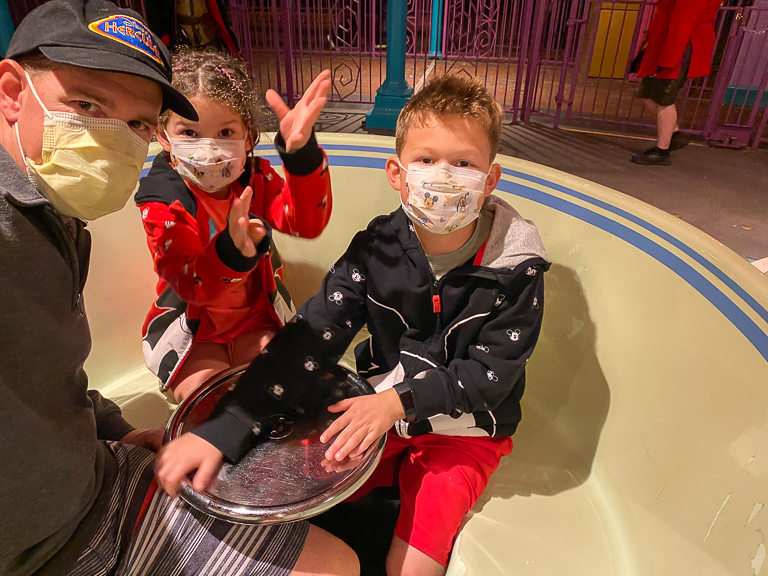 All so that right at 8:50pm we could get in line for Theresa's new favorite ride, the Seven Dwarfs Mine Train! With the park closing at 9pm, the line will be short and no more Lightning Lane guests will be able to cut us off! After 20 minutes, we were riding! 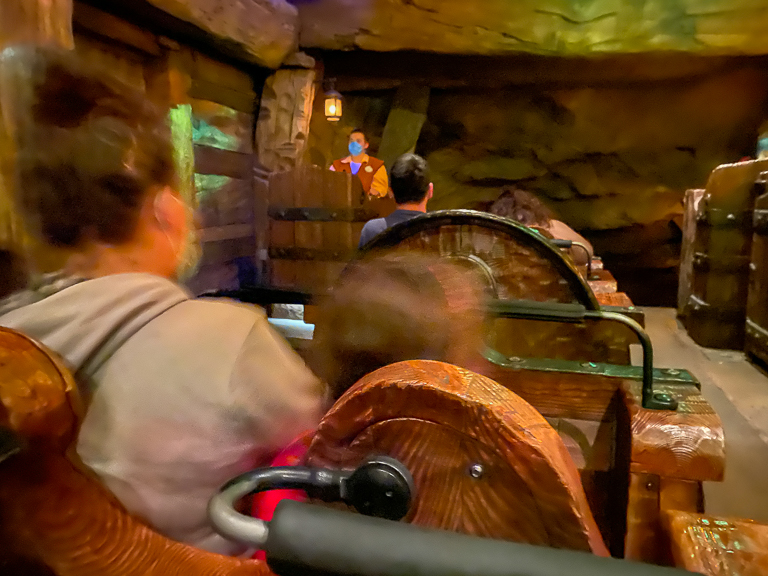 After dinner, in less than three hours, we rode 8 attractions with many that command long waits during the day.

Today was a good day for going to the Magic Kingdom! 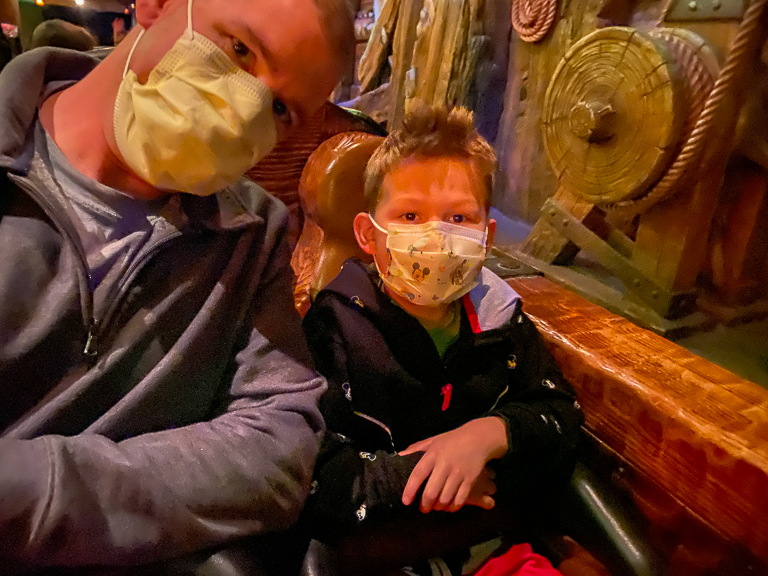