Who doesn't love Doritos! When I announced this taste test to the family in Michigan, many were excited to try them.

But I myself was a little disappointed in how many different flavors I was able to find. I know there's over 20 different kinds, so being able to find only 11 was not my best work. It might be supply chain issues, because though I visited 8 different stores, I was finding repeats of many of the flavors, but nothing new. 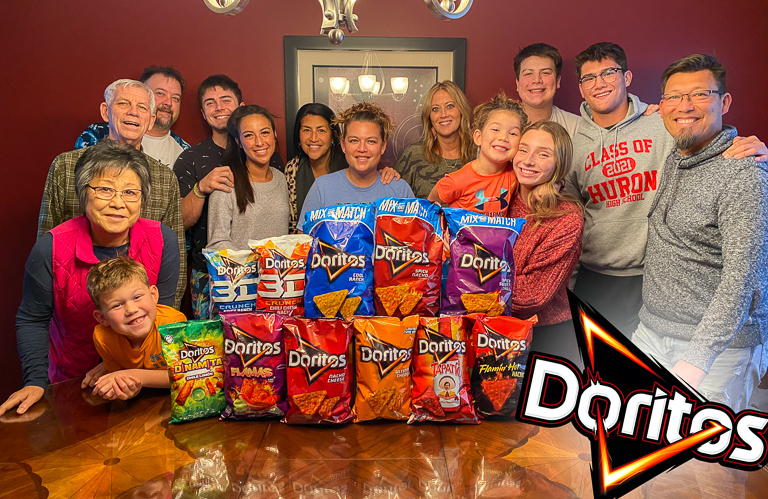 Did you know that Doritos and Disneyland have a history? In the 1960s, at the Casa de Fritos restaurant inside Disneyland (Rancho del Zocalo today) surplus tortillas were cut up, fried, and seasoned. They were so popular that eventually Frito-Lay released them nationally in 1966 as the first tortilla chip in the USA.

Toasted Corn (1966) was the first flavor released, but it was not so popular because it lacked much seasoning. Taco flavored Doritos (1967) came next and were much more successful. Finally in 1972, the flavor I think about when I think of Doritos was born. Nacho Cheese! 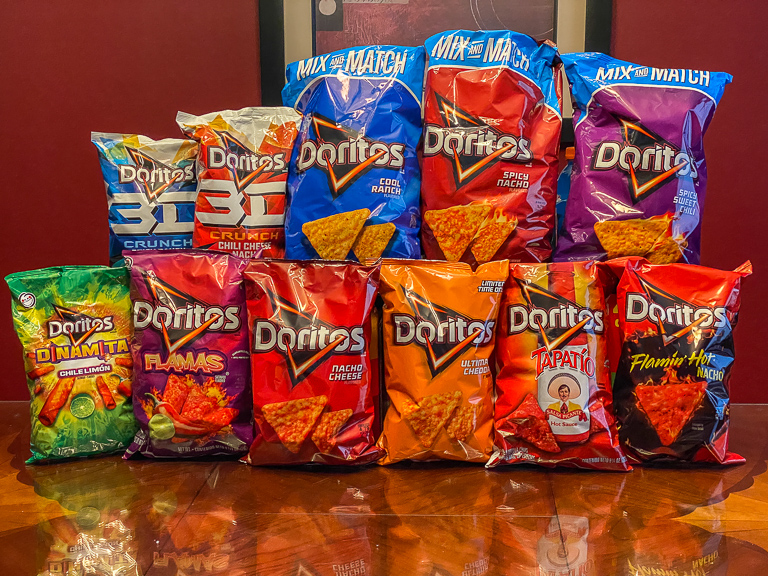 With only a day left in our Michigan visit, I've done what I could to gather all the flavors I could and we've got to get this taste test underway. That's a lot of chips on the table! 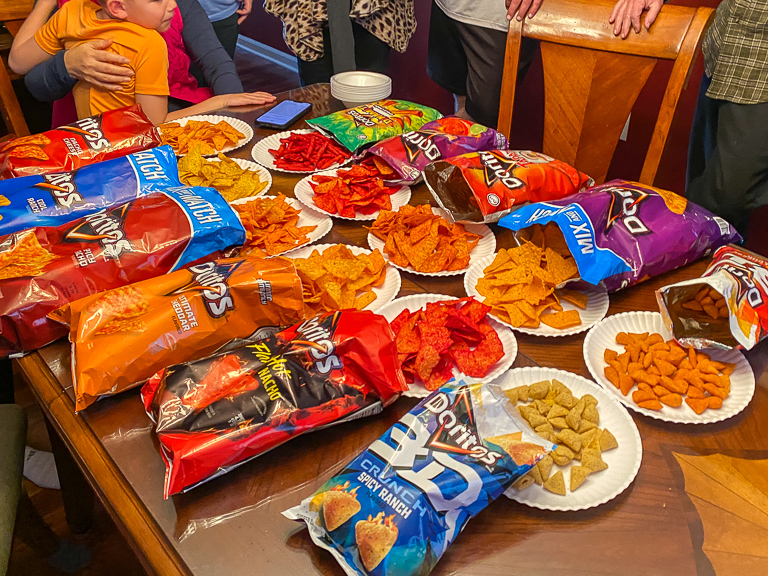 Someone is not looking forward to the spicy ones.
Ian - I'm not doing all of these. 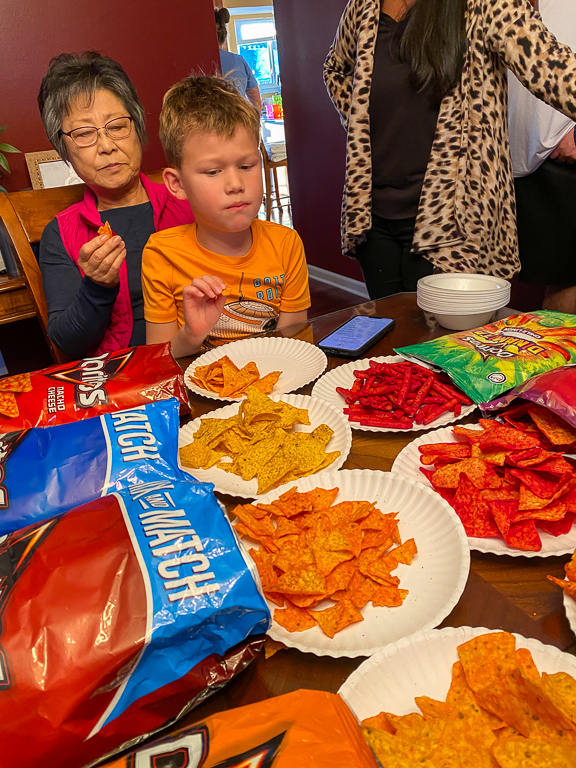 Doritos Nacho Cheese
Good thing we're starting with the classic Nacho Cheese Doritos.
Ethan - It's been a minute since I've had just a regular one.
Donald - The regular one hits good.
Theresa - You can't fault that one.
Rita - When I think of Dorito, that's it!
Tyler - Those are fantastic in taco salad. 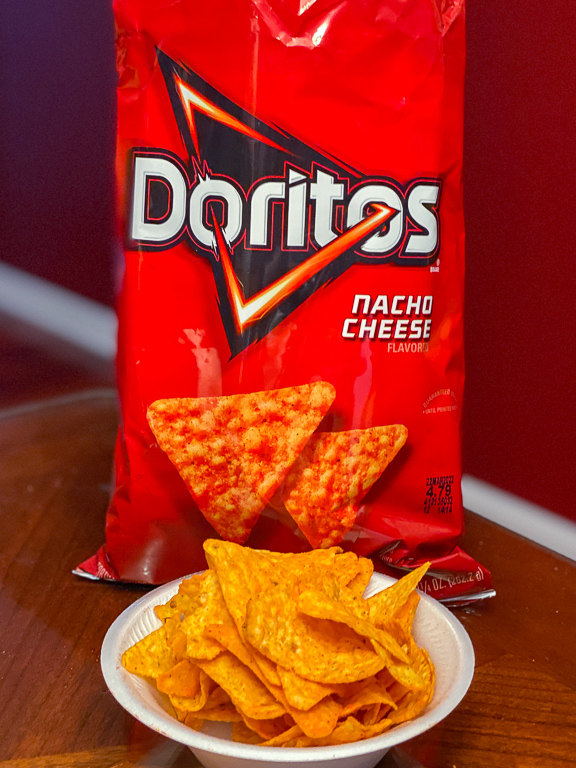 Doritos Cool Ranch
Mmm. There's something about this Cool Ranch Flavor that makes them so easy to snack on.
Ian - This is good. This is Ian Flowers and this is a very good Dorito. (I do audio recording during these and ask people to speak their opinions out loud so I can recall them later)
Payton - Definitely tastes like ranch.
Ethan - Defintely Ranchy.
Aubrey - Delish.
Amy - They're yummy.
Richard - Those are both good. 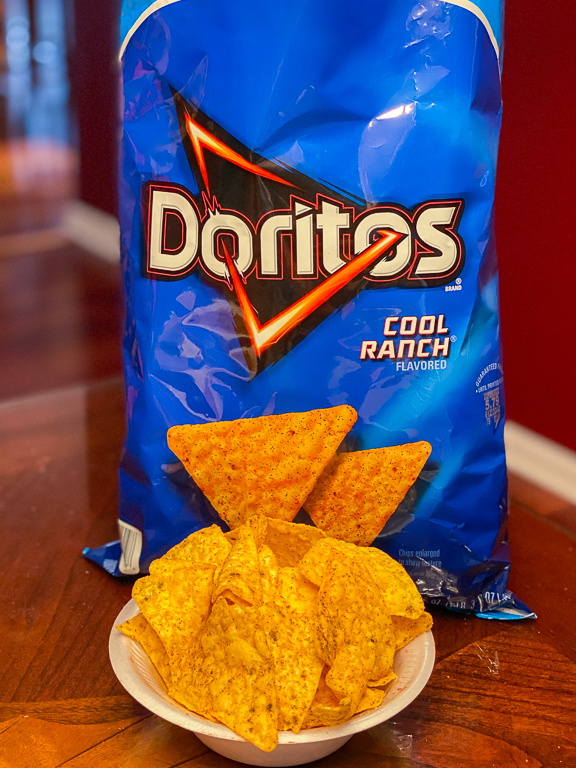 Time to try something a little bit spicier. 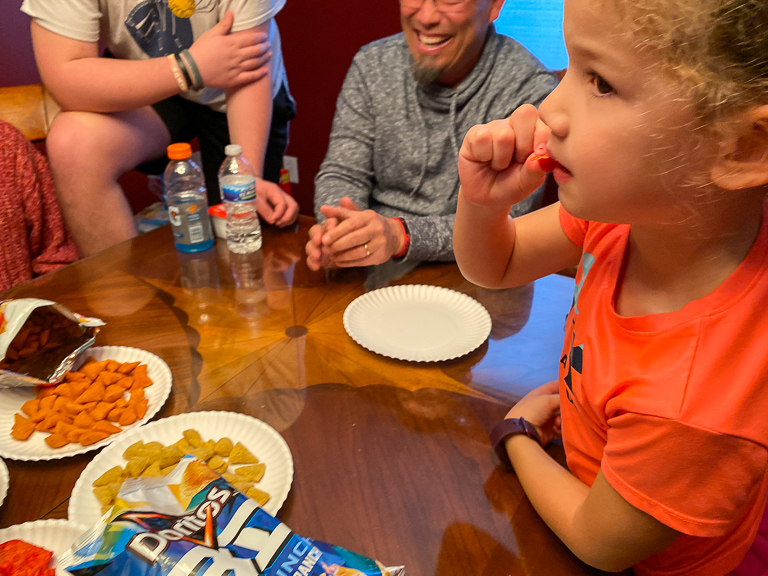 Doritos Spicy Nacho
Theresa - This one has a little bit of spice to it, but it's not too bad. It's just a little bit of heat. A little bit of oomph.
Ian - This one Ian is not trying.
Ethan - It's not spicy at all.
Austin - I'm not getting a ton of flavor from it.
Payton - It kind of tastes like the Nacho Cheese.
Eventually Ian was convinced to try it.
Ian - It's too spicy.
He was not a fan. 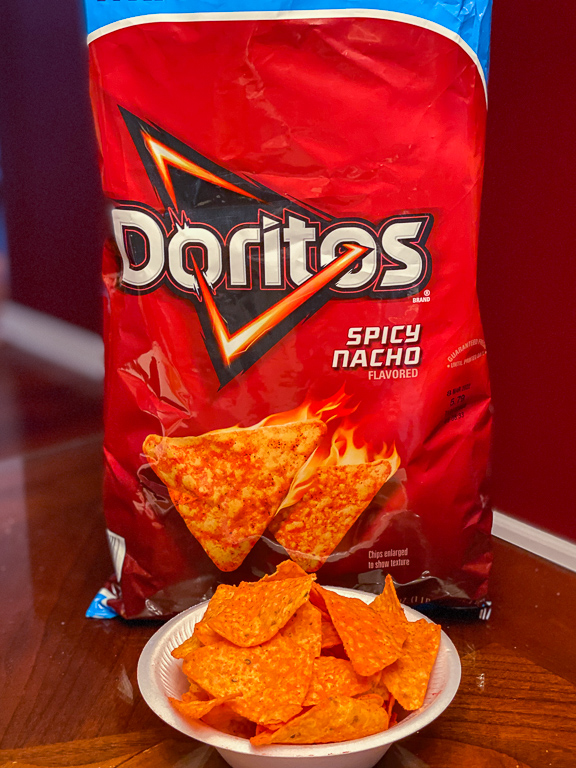 Doritos Ultimate Cheddar
Ultimate Cheddar? Could they be better than Nacho Cheese?
Austin - It kinda tastes like Cheddar Cheese Popcorn.
Joe - It's like the Cheddar Jack Cheez-Its with the powder on them.
Rita - Not a fan.
Donald - That's so disappointing.
Payton - That's a no from me.
Aubrey - It tastes like fake cheese. Like from a spray can.
Ian - Definitely no from me.
Payton - They taste like Cheese Rice Cakes.
Joe - Who eats cheese rice cakes? That sounds terrible.
Theresa - I mean, if they were the only Dorito around, I would still probably eat them. 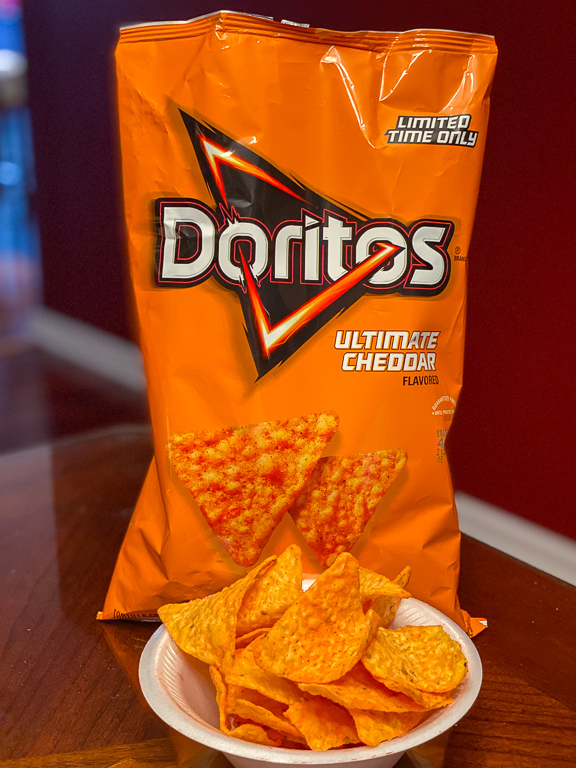 Time to get hot! That has a lot of red powder on it! 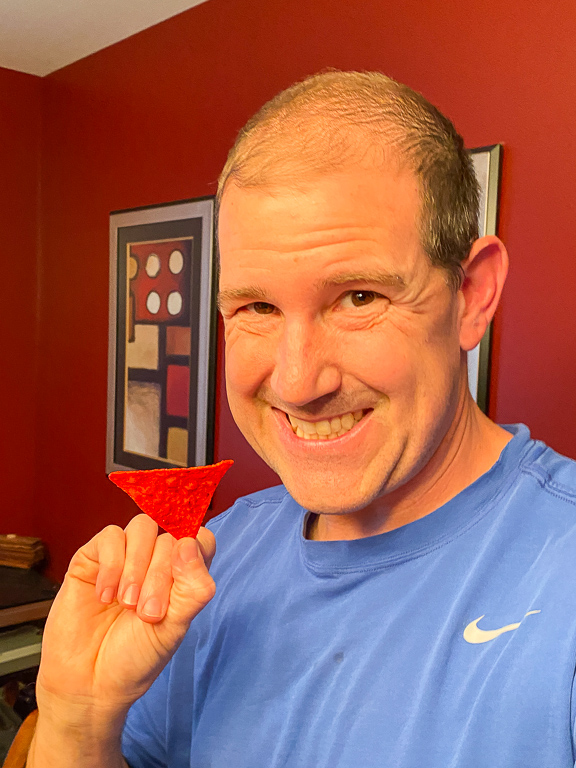 Doritos Flamin' Hot Nacho
There were lots of people only taking a small piece of chip.
Donald - These are going to be hot!
Aubrey - They don't have a very good flavor though. It's hot, but there's just not a flavor to go with it.
Payton - No, not good flavor, just spice.
Theresa - I like Flamin' Hot. They are hot, but I like the hot flavor. I'd rather have them than Nacho Cheese.
Rita - I don't like it.
Richard - They are pretty warm.
Joe - I like it spicy. These could use a little more flavor of something else, but I like them. 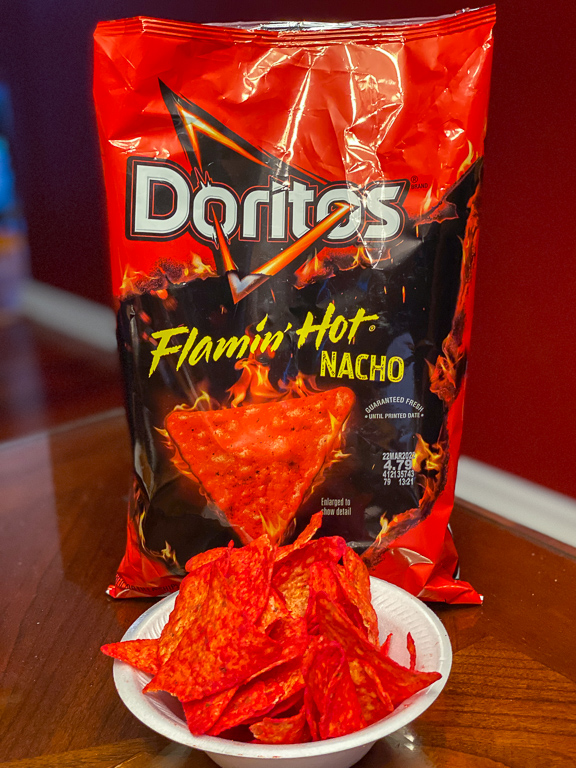 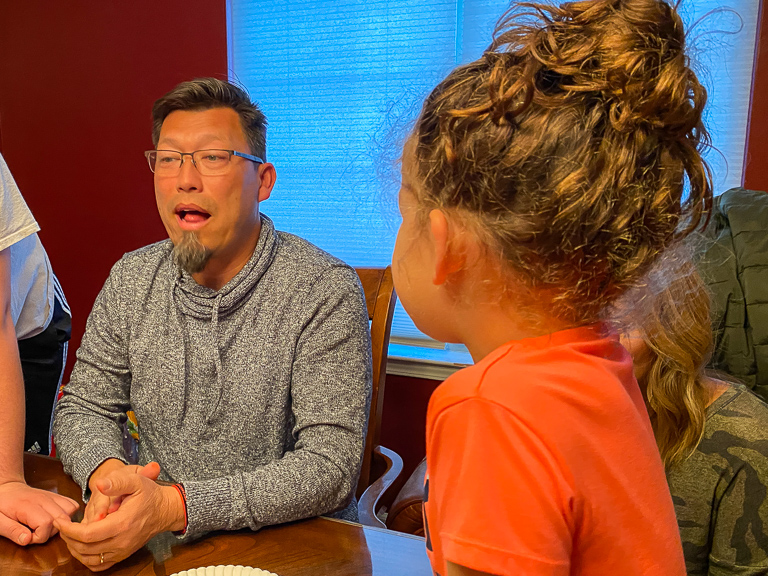 Even armed with milk, Ian is not a fan of anything spicy. 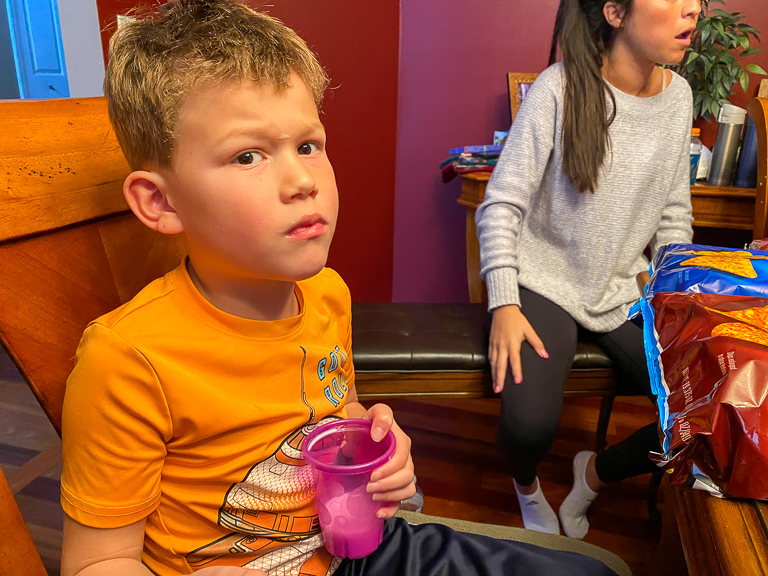 Doritos 3D Crunch Spicy Ranch
Time for some Doritos 3D chips. These are something different. Instead of a tortilla chip, these are puffed up.
Amy - I like the flavor, but to my teeth it feels like a Bugle and I don't like it.
Payton - I'm not a fan. That's not a Dorito.
Ethan - I kind of like it.
Richard - It doesn't have a Dorito kind of taste, does it.
Tyler - I like the flavor, but the texture is not
Ian - It isn't spicy, but the flavor is horrible.
Theresa - I like the texture. It has a jalapeno flavor, and I don't like that. I don't like the jalapeno flavor in any of my chips. Sadness.
Donald - Ooh, I love Ruffles Jalapeno Chips. We should do a taste test with all jalapeno flavors.
Theresa - I just said I thought they were all disgusting. Why would I want to do that? 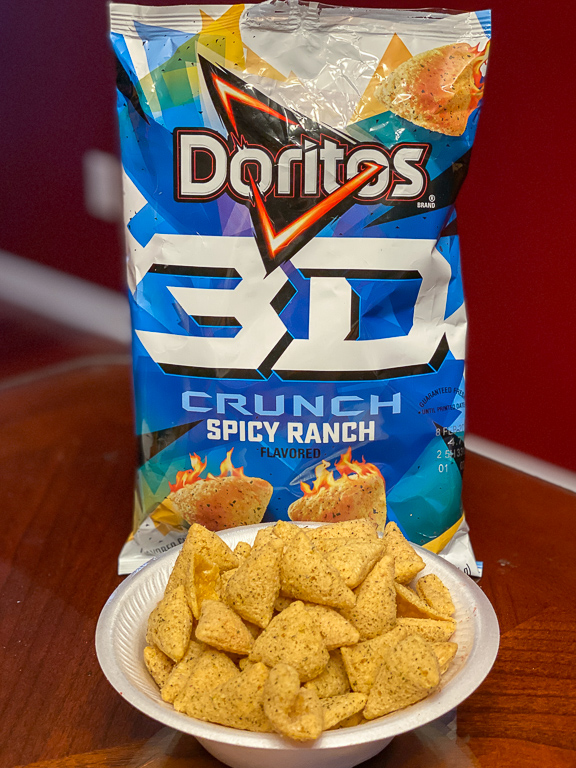 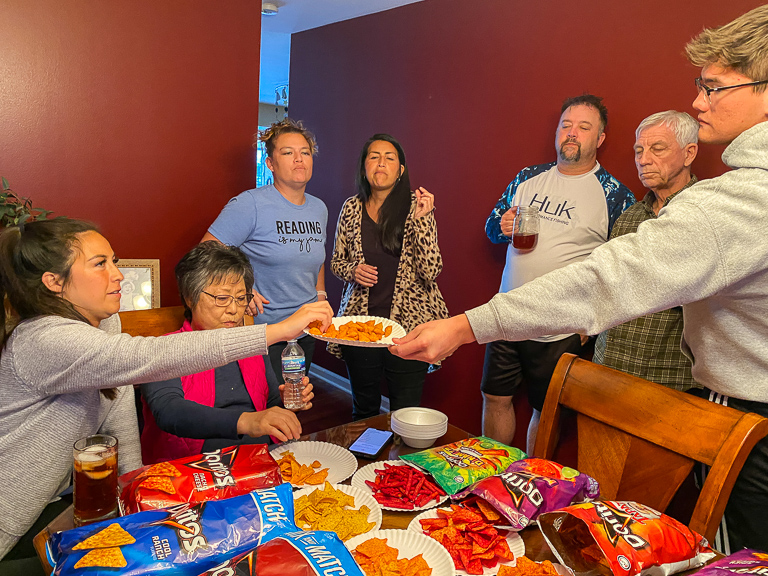 Doritos 3D Crunch Chili Cheese Nacho
Theresa - Is that like hot chilis? Or is it like stovetop chili?
Ethan - The second one. These taste like Chili Cheese Fritos.
Theresa - Mmm, I like those.
Donald - These are good, but not nearly as good as Chili Cheese Fritos.
Payton - I'm not a fan of this texture at all. They're a failure for me.
Tyler - It's kind of like they put the flavor on a cereal texture.
Rita - I wouldn't consider that a Dorito, but I like it okay for a snack. 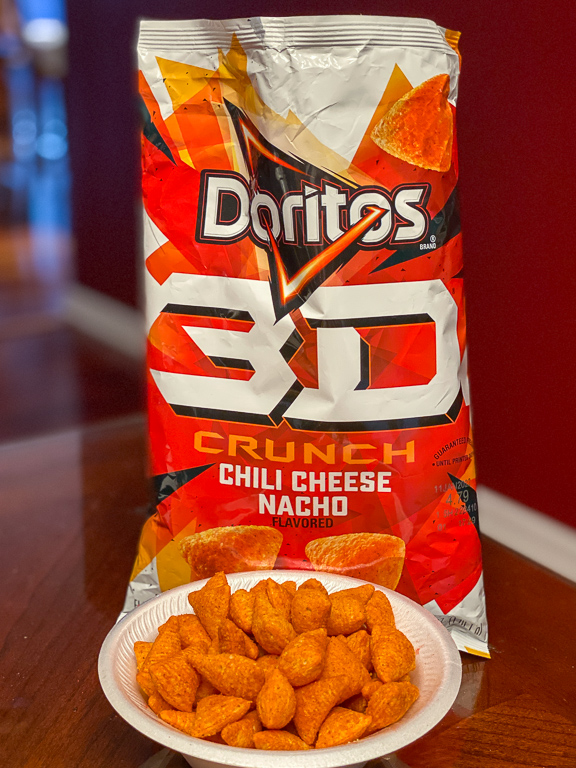 Doritos Spicy Sweet Chili
Theresa - This one reminds me of that Asian sweet sauce.
Payton - These are going to be the best ones.
Jared - These are my favorite. I will crunch these up and put them on my sandwich.
Aubrey - I used to hate them, but now I love them.
Amy - Those are yummy. I don't think I've ever tried those before. I love those. They're very flavorful.
Ethan - They're more sweet than spicy.
Payton - They get a 100 out of 10.
Tyler - I don't like them. We get them all the time, but I'd much rather have Spicy Nacho. 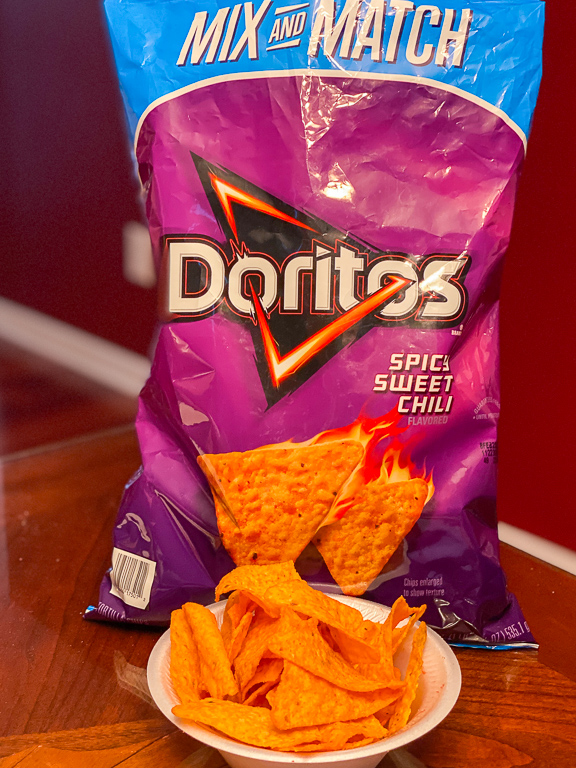 This is going to be interesting when it comes time for the favorite. There's a lot of people liking different things. 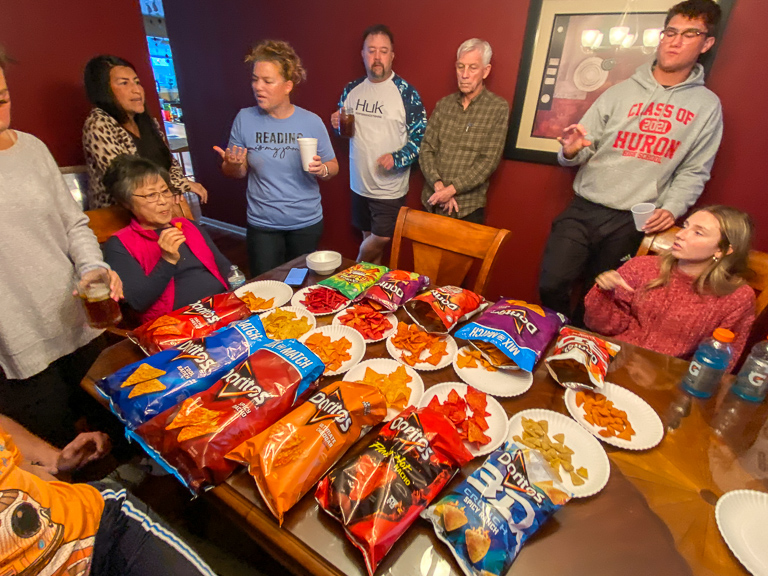 Doritos Tapatio
Rita - Isn't that that Mexican hot sauce?
Donald - Whoa!
Jared - It tastes like the cheddar.
Aubrey - It's not actually that hot.
Alli - That's actually pretty good!
Rita - It tastes like a burrito.
Theresa - It's got like a mexican flavor along with the hot sauce.
Donald - It's a Mexican party in a bag!
Tyler - We've got to try those with taco salad. That would be good! That may be my new favorite.
Austin - I love the Tapatio! 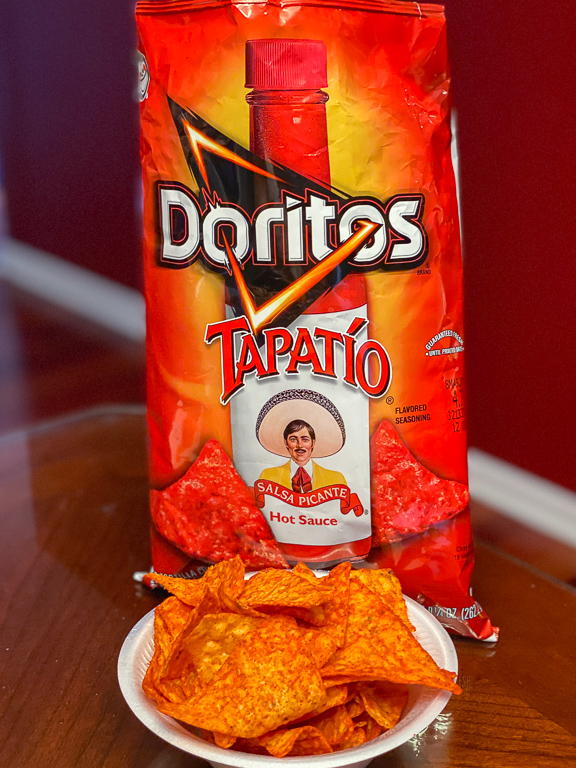 Doritos Flamas
Joe - It looks like Chili and Lime. They're not as hot as Flamin' Hot.
Donald - I'm not grabbing a dark one.
Aubrey - It's got a really limey flavor.
Ethan - That's sour.
Theresa - That is a lot of lime. These are like the Flamin' Hot but with adding a bunch of lime to it.
Jared - I'm not a lime guy.
Tyler - We should probably try those on taco salad. 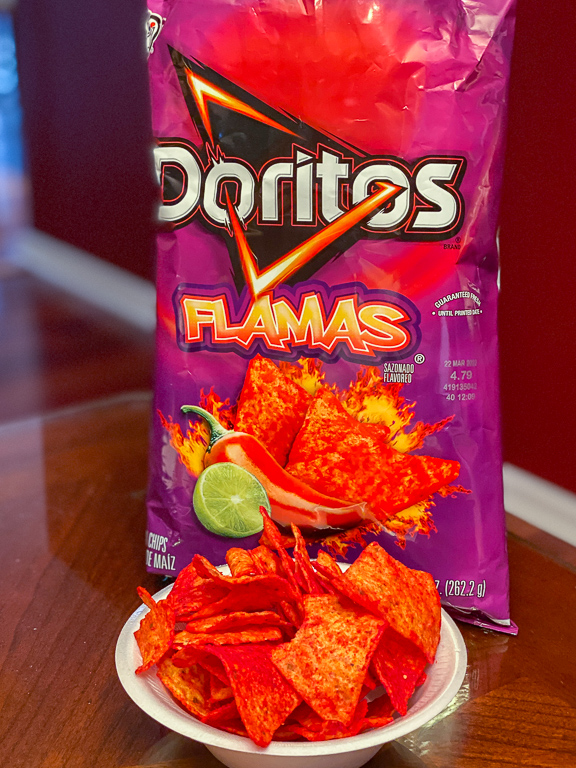 They do have some heat. Alli was doing so good up to this point, but finally got some iced tea to cool things down. 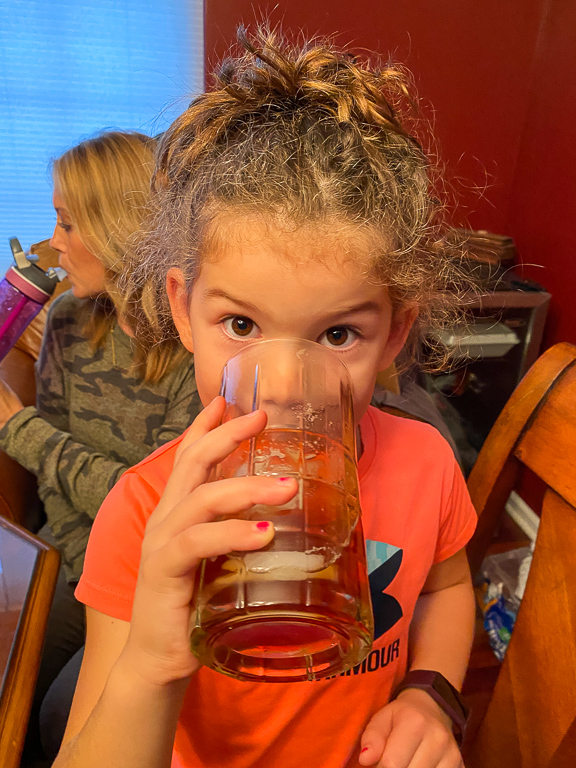 Doritos Dinamita
Aubrey - These ones taste like the Flamas ones, but rolled up. My mouth starts bleeding, but I can't stop.
Tyler - These are fantastic.
Joe - I love the texture of these. The best Doritos chips are the ones that are curled, and these ones are all curled.
Ethan - These have much more lime flavor. 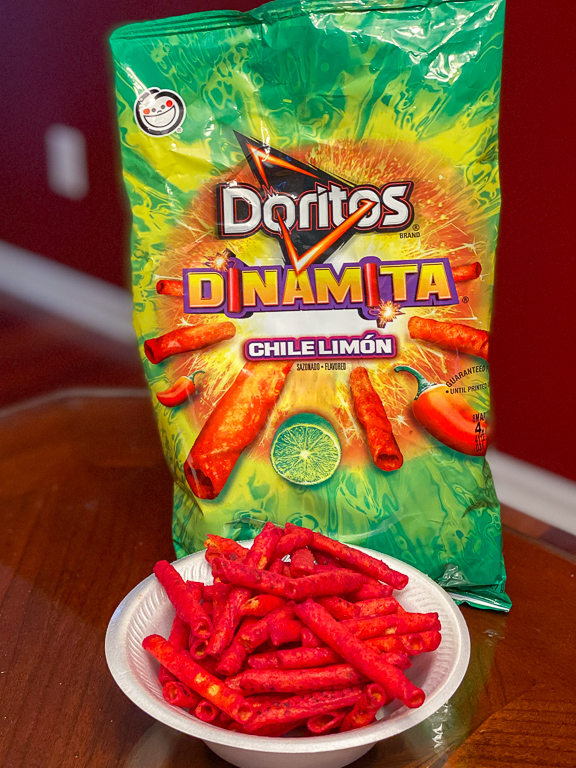 Anyone need to go back and try some of the flavors again before picking your favorite? All good?
Donald - I'm glad we did this taste test. Now I know what I really like. Tapatio is my surprise.
Alli - I ate every single one!
Tyler - I thought the lime ones were fantastic.
Aubrey - Those were delish.
Rita - This was a great taste test. I love this one.
Donald - I agree. My "Reese's" taste buds still have not recovered. My most favorite candy bar became my least favorite candy bar after that one. 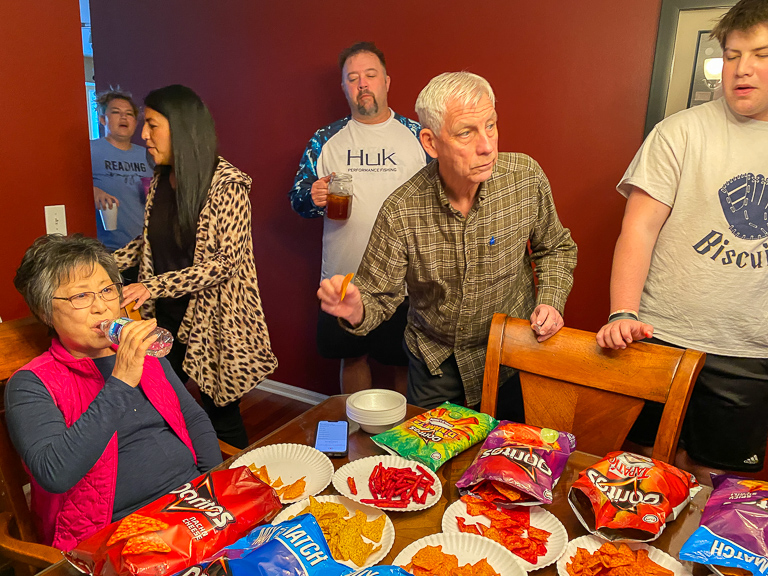 There's a tie for the favorite overall Doritos flavor!
Wow! The three siblings and their mother all like the same thing?
Spicy Nacho Doritos! 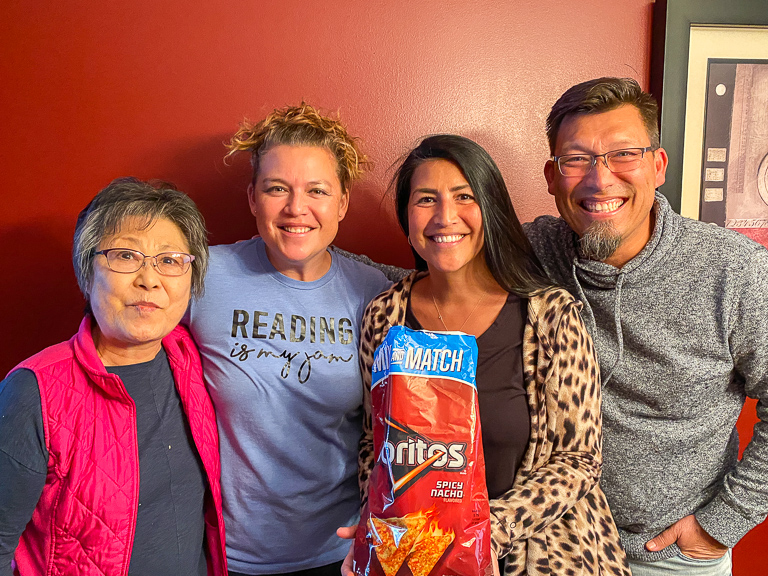 Also with four votes are the Spicy Sweet Chili Doritos.
Amy - I've never had them before today. They were so good! 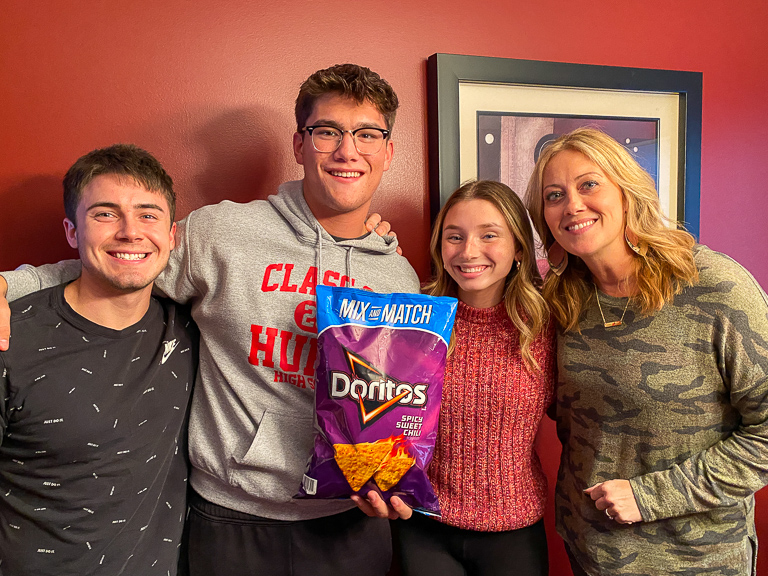 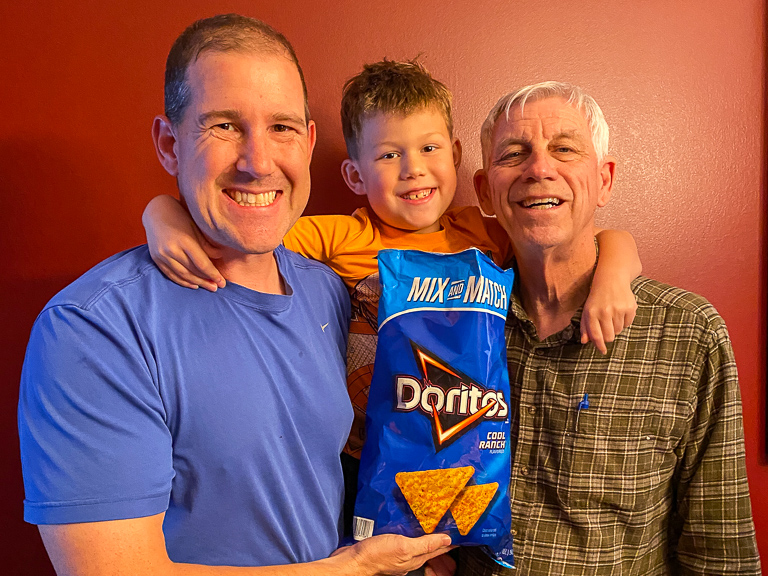 These two siblings like the spicy lime flavor of Dinamita Doritos. 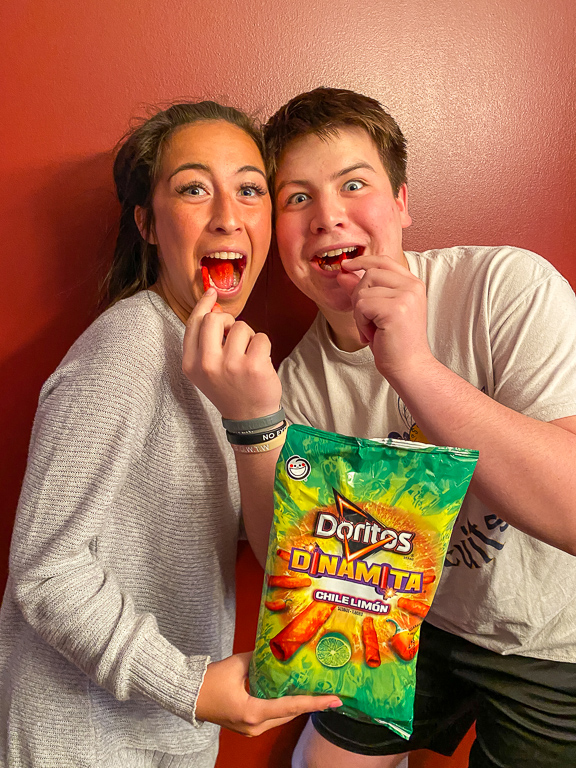 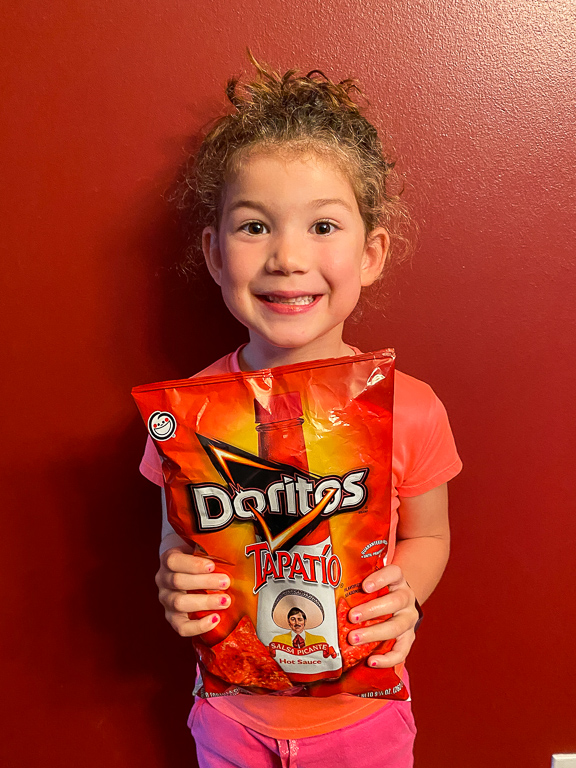 And Tyler wraps things up with Flamas Doritos. 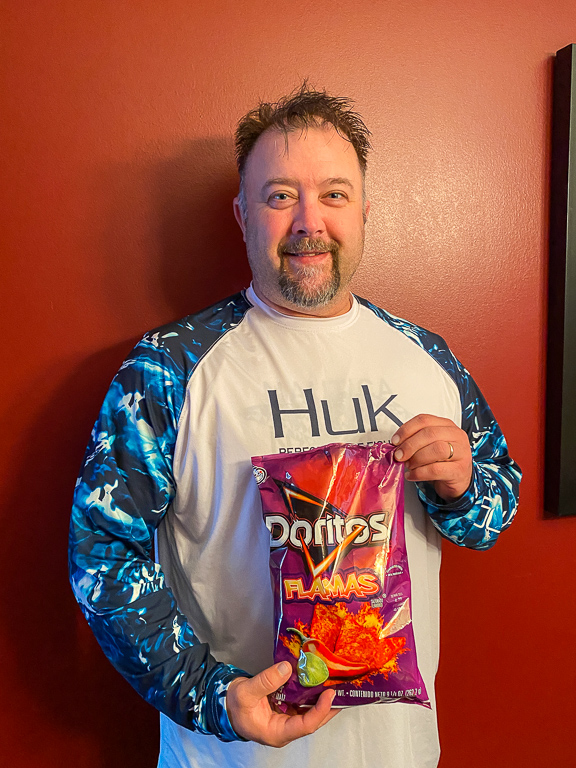 Well that was fun! Now we get to eat all these! And tonight's dinner is tacos which means we can make an awesome taco salad with whatever chips we like! Tyler should be happy! 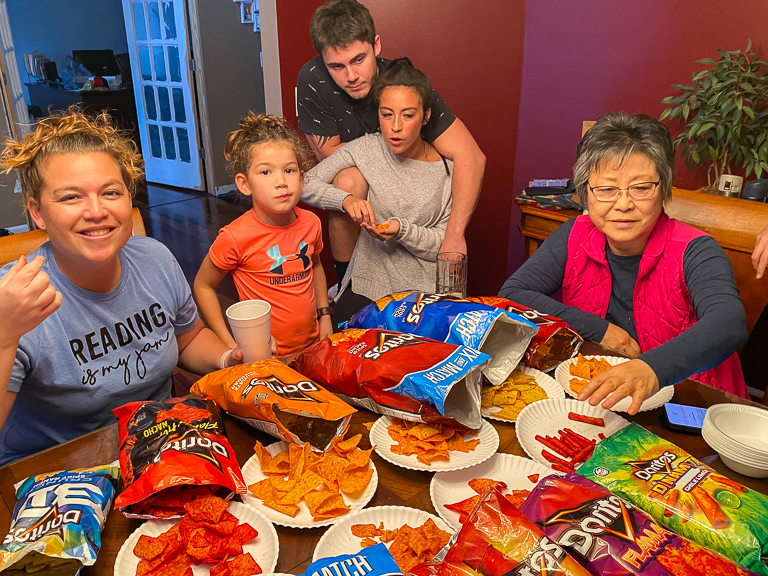