December Animal Kingdom and Epcot - plus a visit with friends

Looking back to our Disney trips in December.

Today we're visiting a couple parks, Disney's Animal Kingdom and Epcot, plus we get to meet up with friends! 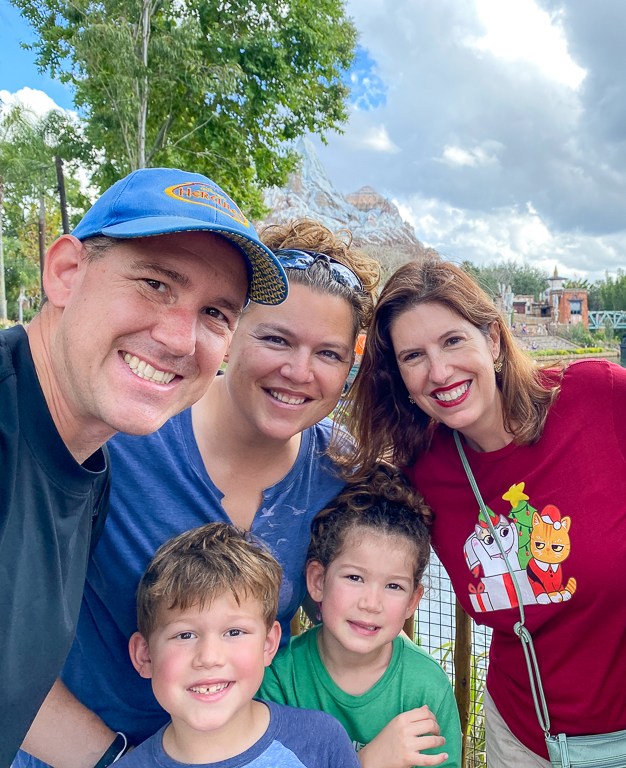 The kids don't particularly care for breakfast foods, especially if it's something like cereal.
Ian - Can I have tacos?
We happened to be making tacos to bring for dinner tonight, so sure, you can have tacos for breakfast. There's no rules against that. 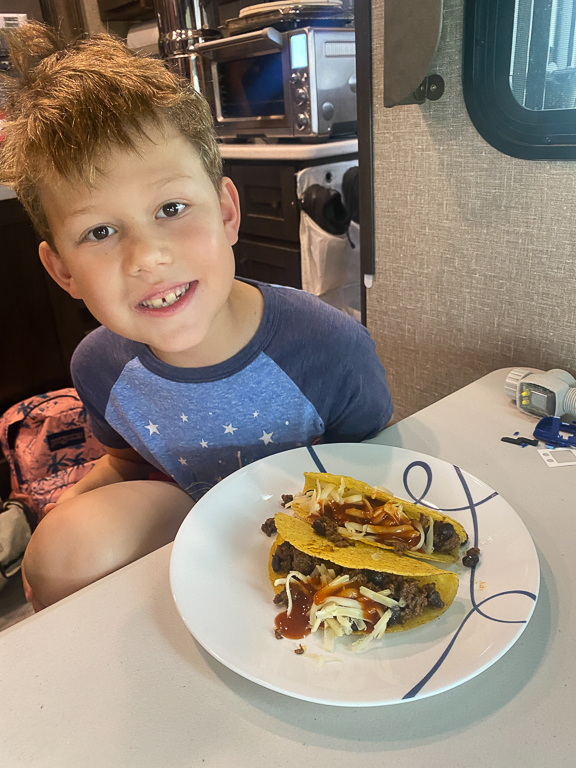 Today we're meeting up with Nicole, Jacob's sister-in-law, and her mom. We've met up with her at Disney World before, back in 2017, when the kids were a lot smaller.
We've only got a little bit of time together and we can't do anything too crazy, so let's see what is available. 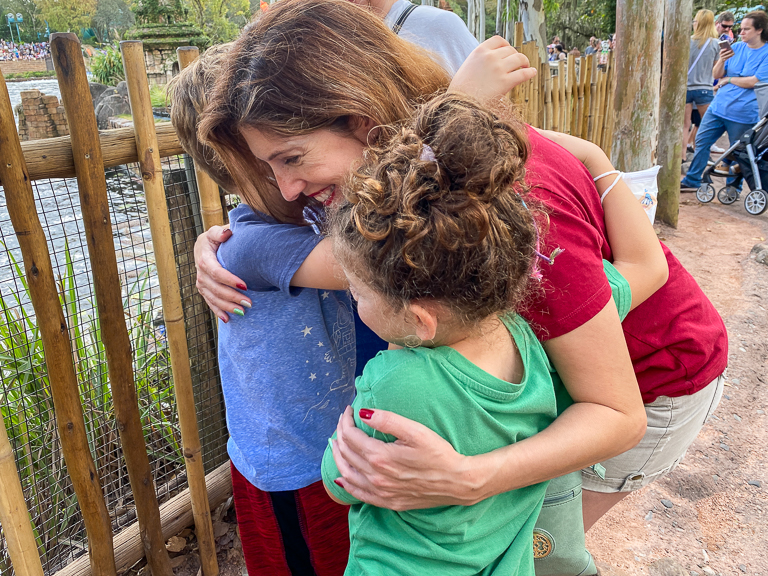 How about the Festival of the Lion King? I've heard that they were having issues getting performers, due to Covid, but it's up and running again. We were able to get into the next showing and had a view from the very top row of the bleachers. 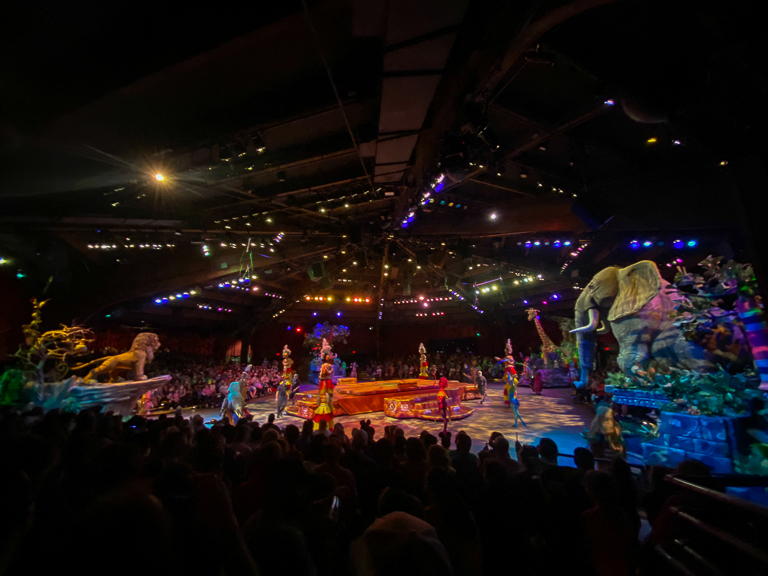 The singing is great. We love the songs from this movie, and the performers did a great job.
When the fire dancer lit the torches and started twirling them, Ian said "I will never do that. That is dangerous." 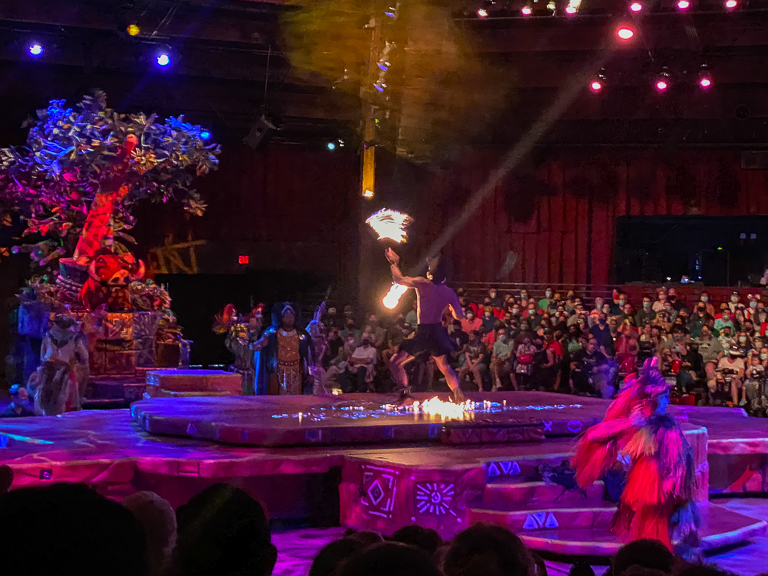 The show was good, but missing a lot of the fun elements we were used to seeing from previous shows. Gone are the Tumble Monkey acrobats who jump on trampolines and play on the high bars. And the "bird" performers instead of swinging through the air on ropes, did more of an interpretive dance in the middle of the stage. So yes, it's back, but it's missing a few of the things that made it really great. 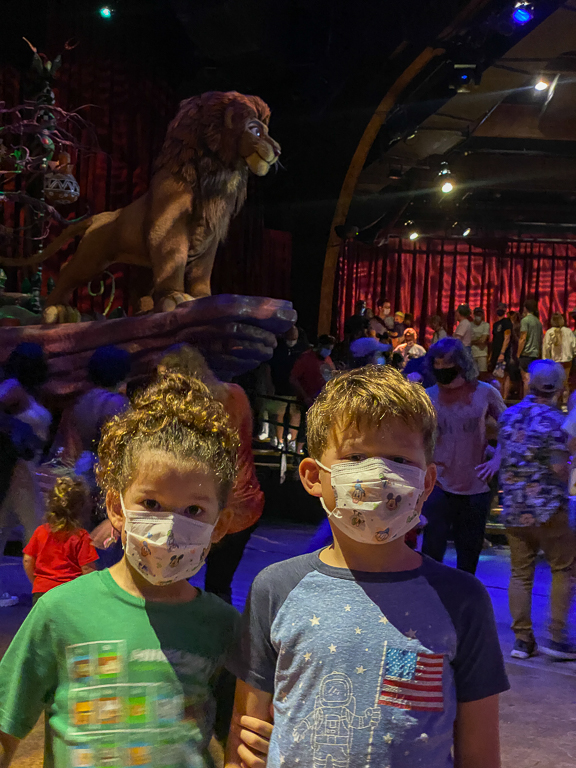 With just a little bit of time left with Nicole and her mom, let's go check out another new show, KiteTails. 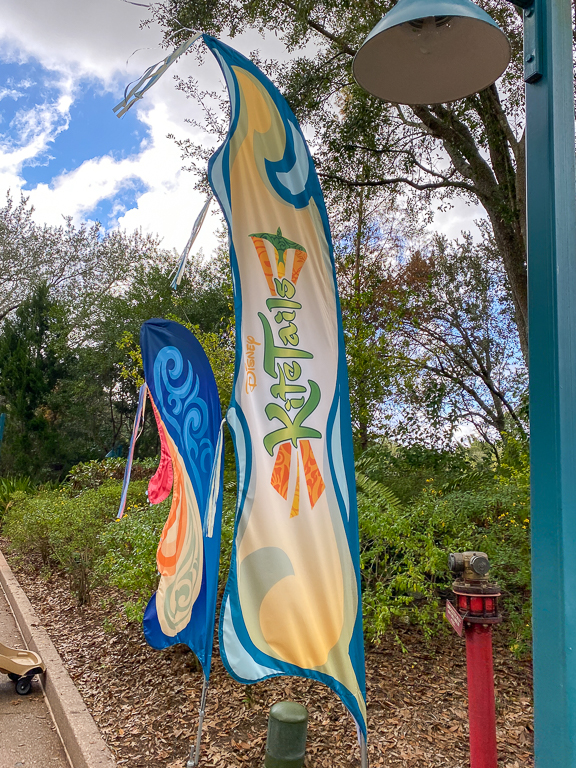 It was... a little odd. Jet skis are going around the water here with different kites behind them. Some are characters, others are regular kites. 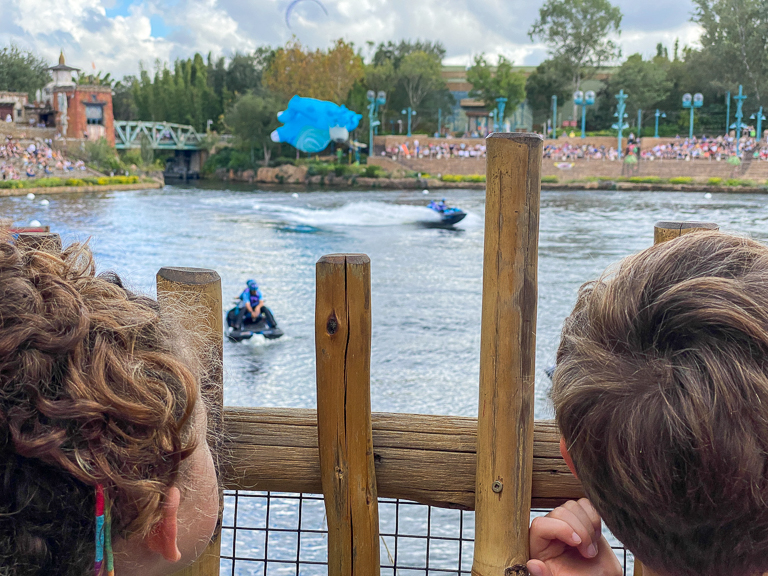 The "kite" characters look like they're being dragged around by their heads. And I think we were all hoping to see one crash to add a little excitement. 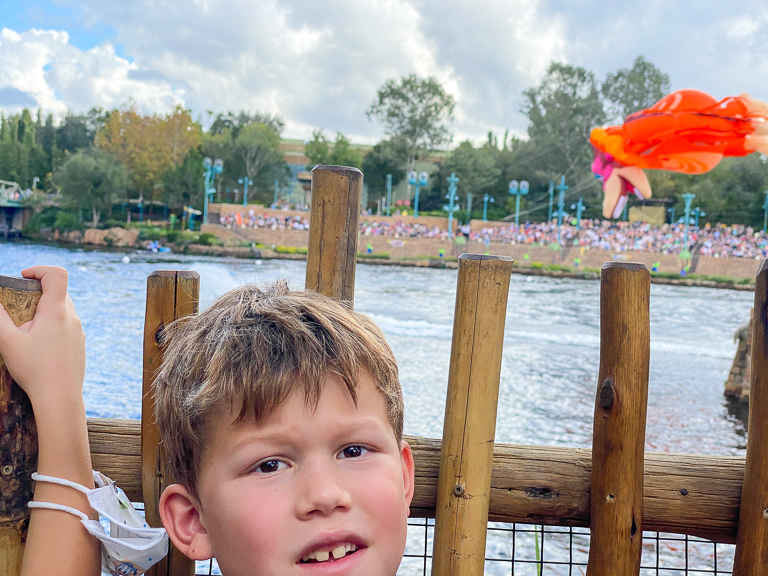 Great to see you Nicole! Hopefully we can hang out again while we're still in Florida! 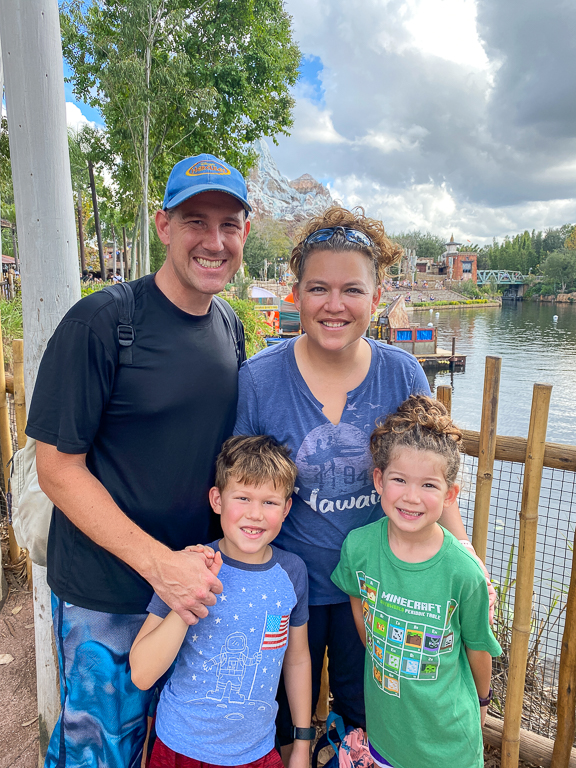 Let's find a ride to go on. How about Expedition Everest?
I asked the kids if they were going to keep their hands in the air this time, and Alli really took that to heart. She's keeping her hands raised before we board. 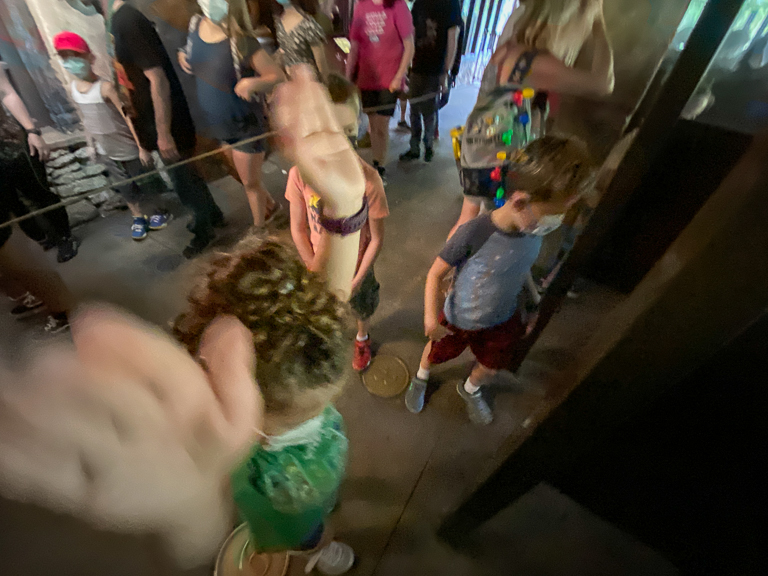 In the air at the station. 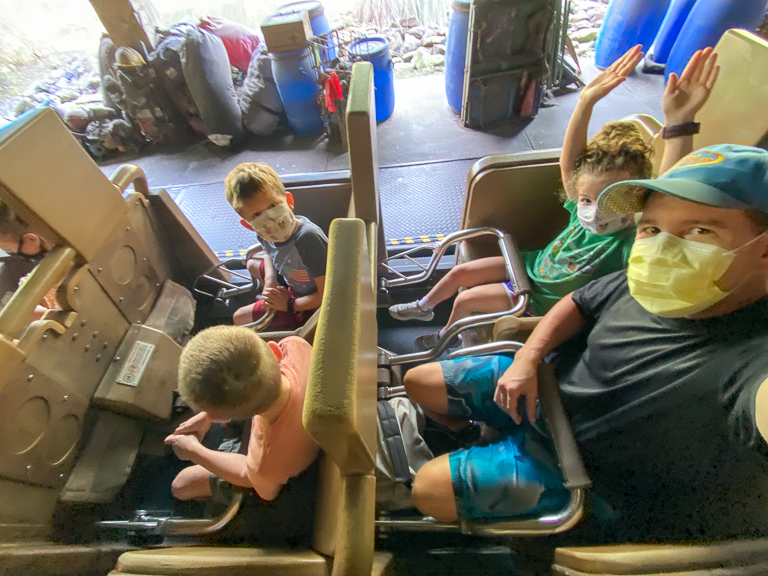 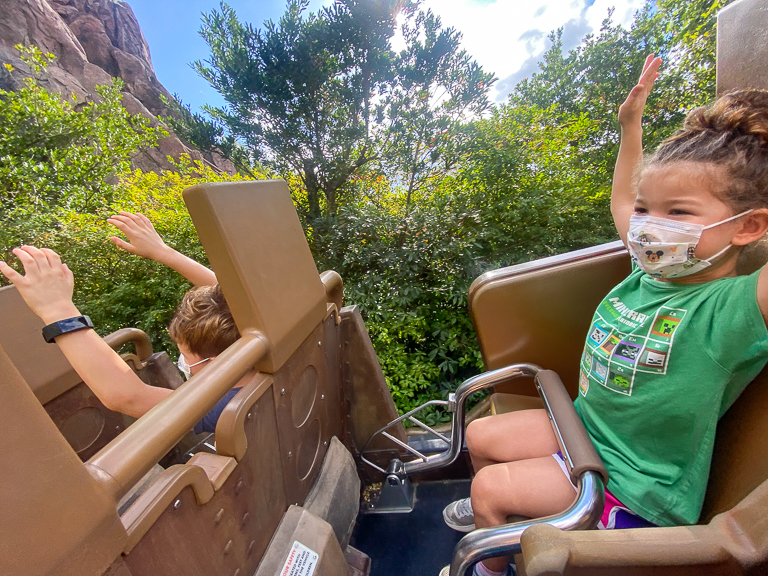 When you go in reverse. 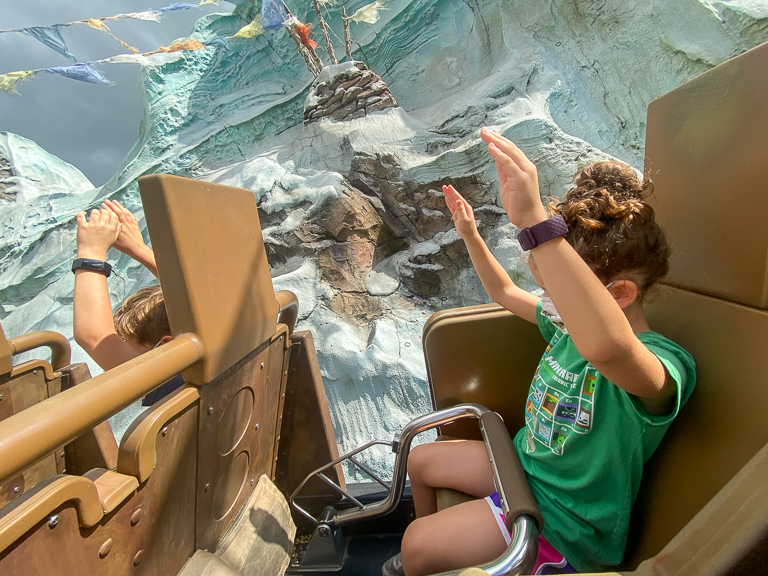 And Theresa caught us on camera as we were going down the big drop. Yep, her hands are still in the air there too! Great job Alli! I'm glad you love the big coasters! 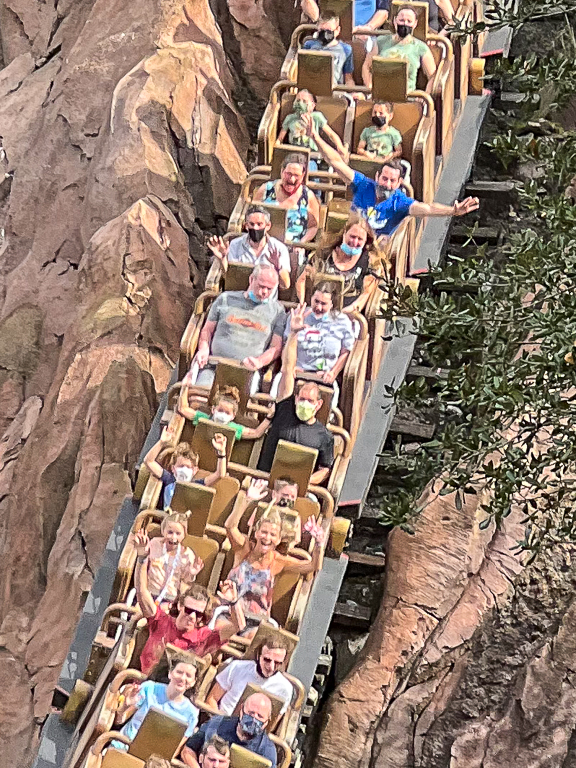 Walking out of Asia, Santa was going by on a boat.
Hi Santa! 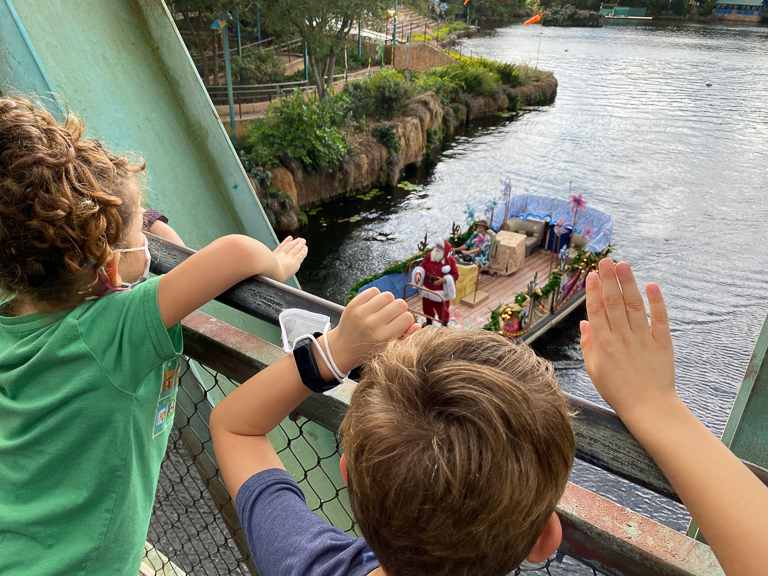 <then running to the other side of the bridge>
Bye Santa! 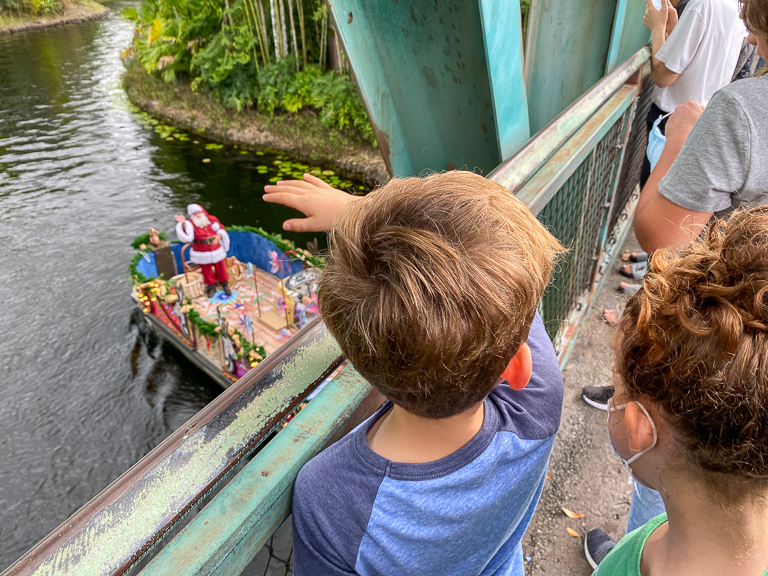 After our time in the Animal Kingdom, we took a trip to Epcot. That'll be a good place to end our night.
This white backpack has some years on it. 20+ years is our best guess. After loading it heavy with water bottles and other things, it's finally starting to rip at the seams. One of the shoulder straps gave up, after a few weeks of hanging on by threads. I improvised a quick solution. This will have to suffice until we can get it repaired. 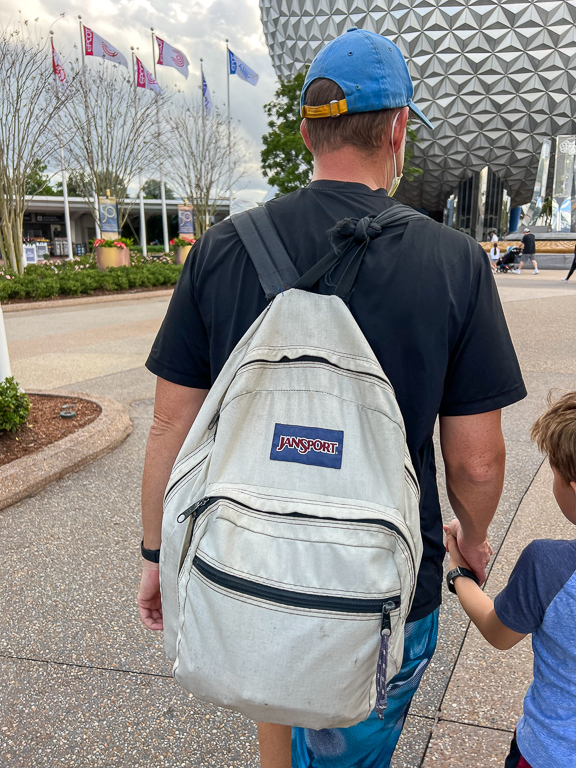 The kids loved taking a ride on Test Track. 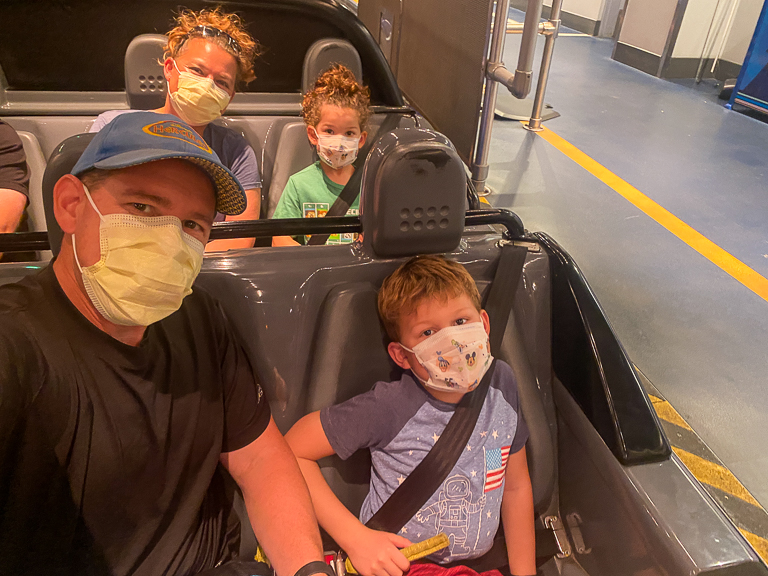 The kids have been wanting to go on this playground inside Epcot near the Creations Shop. So after spending lots of money on tickets, with access to lots of rides and characters, the kids just want to climb and jump off playground equipment. Ha! 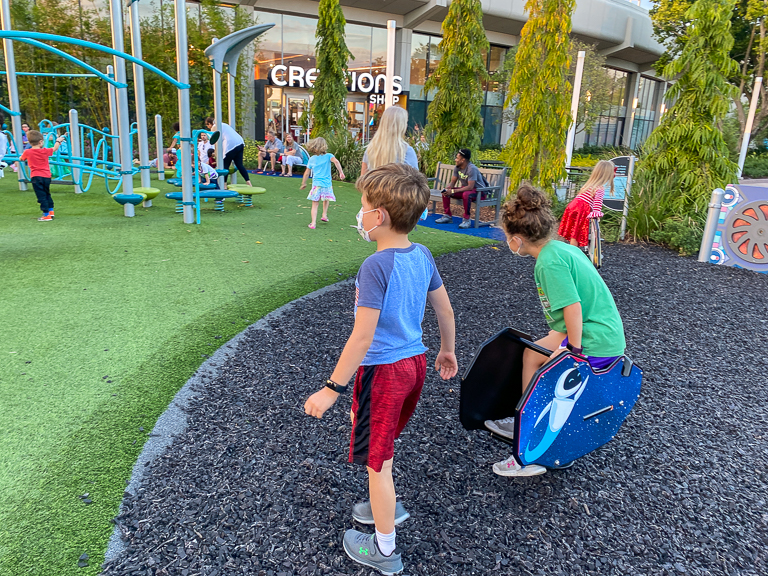 Here's something you won't find on a playground! Mission Space: Orange! The kids love it and so do I. 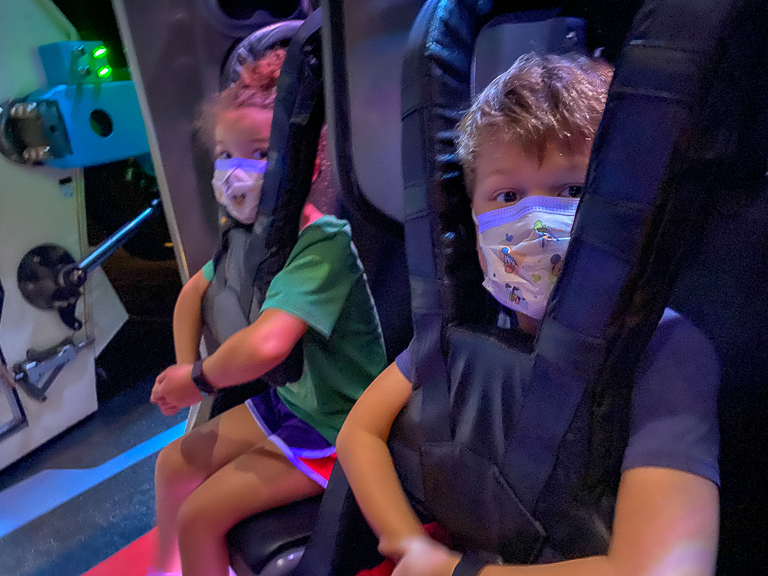 The Land pavilion is a great place to eat dinner. We find an out of the way table, break out the thermoses and cooler packs, and enjoyed a fantastic meal. Look at all those veggies on my burrito. I'm practically a vegetarian. 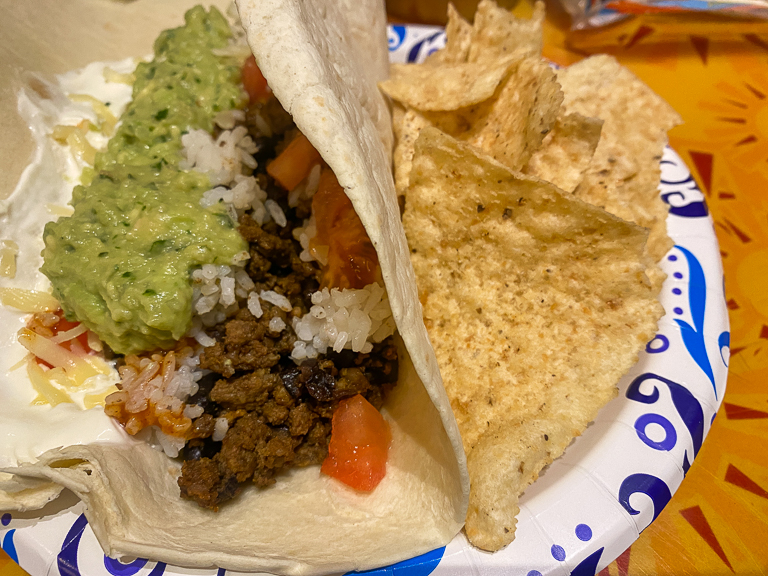 From our table down on the lower level, Ian has been eyeballing the "Next Show In X Minutes" sign for the "Awesome Planet" show. After eating, we found our seats. In the wide open theater, Ian wanted to sit in the very front row. And in this theater, that works just fine! The screen is far enough back that it is okay. Theresa and Alli sat a few rows back. They loved hearing things about the earth and space. 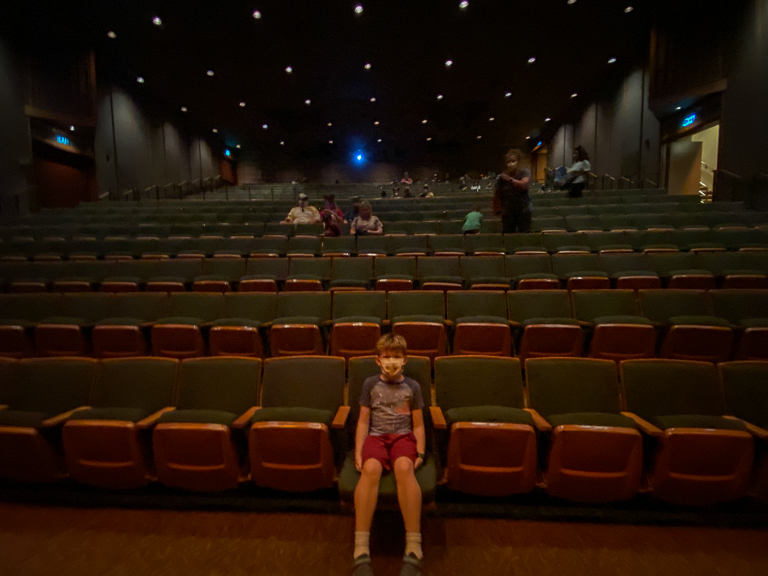 To finish the night, let's take a ride through Living with the Land. With front row seats, you have a great view of the decorations. 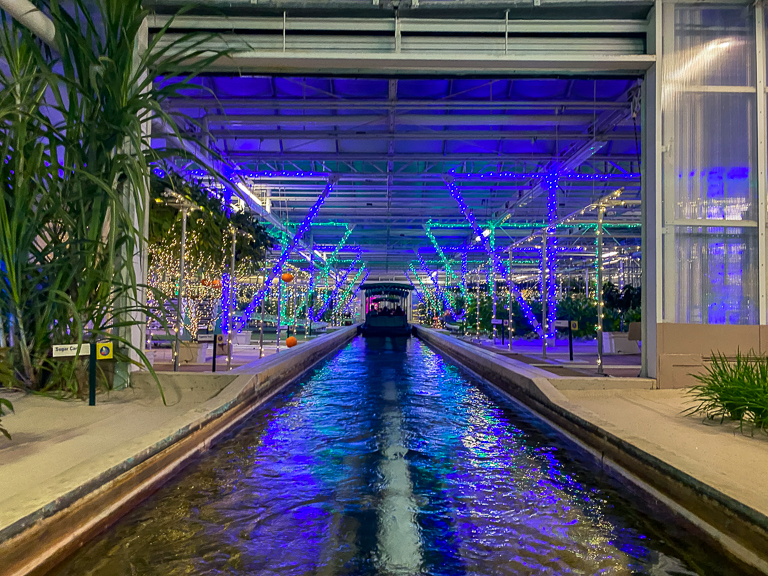 Ooh, The Land has boxes of fresh produce? I wonder how you go about getting one of those. I wouldn't mind a few handfuls of tomatoes, and I know Theresa wants to eat those fresh cucumbers they grow. 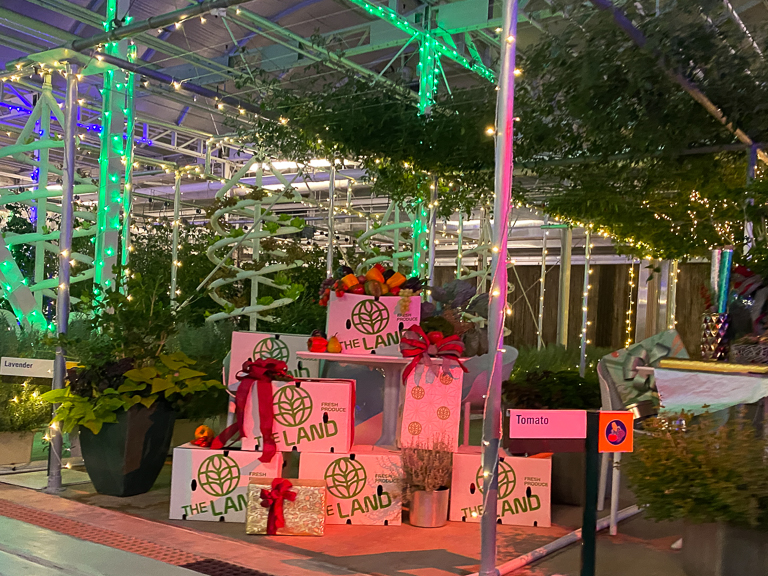 Just as we were leaving, Ian spotted a Christmas stocking. He wanted to make sure we sent a picture to Nicole to let her know she has her own stocking on this ride.
Today was a great day being in the parks! 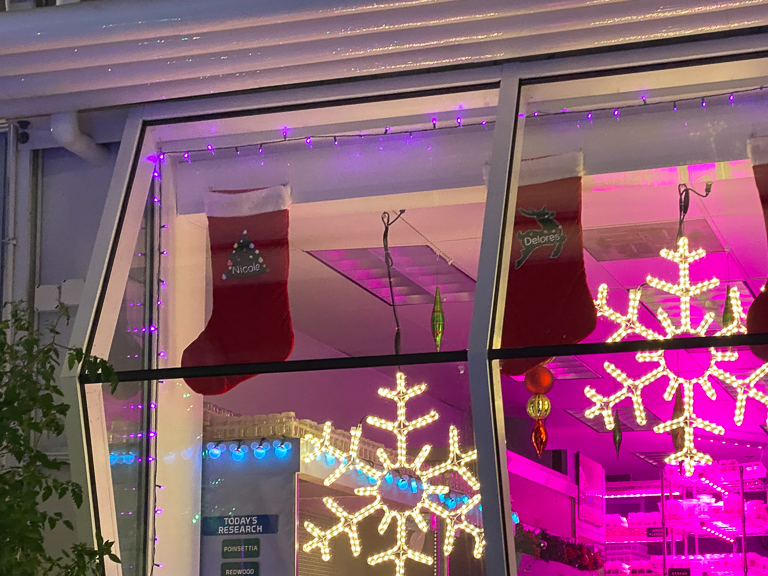