Catching up on some older Disney visits. Today we're going to the Magic Kingdom. 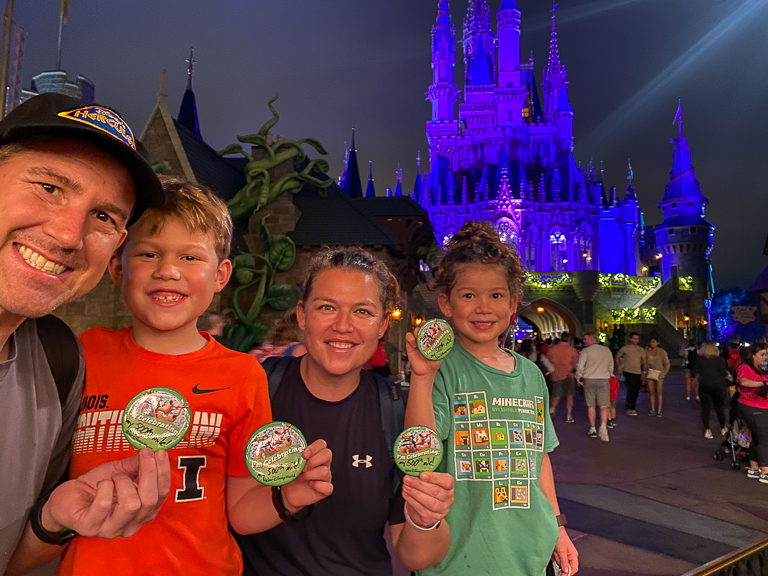 During December, McDonalds was giving away freebies through their mobile app. We stopped there for lunch on the way in to the park. Today's free item was a Big Mac.
Alli - How do I pick this up?
Ian thought they were delicious. Even better than the regular hamburgers from McDonalds. 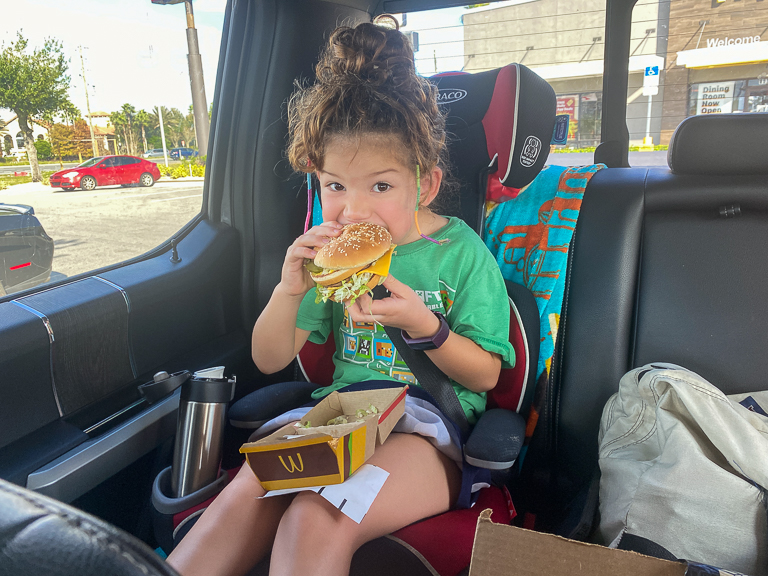 I can count on one hand the number of times I have taken the ferry to Disney World. It's always the monorail. Today though, Ian saw it was an option and wanted to go check it out. 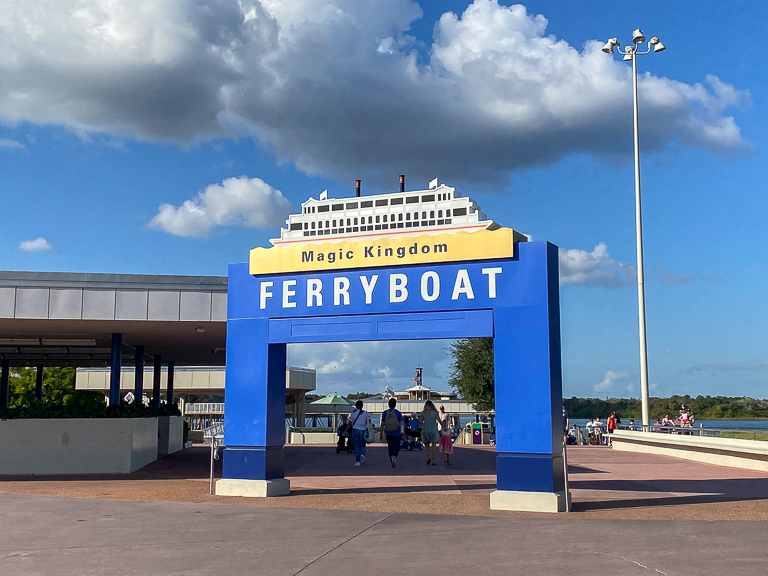 At the end of the night, you always hear the cast members say that the ferry is faster than the monorail. I wonder if that's true, and how much faster it really is.
We are showing up late today, not arriving until 3pm. 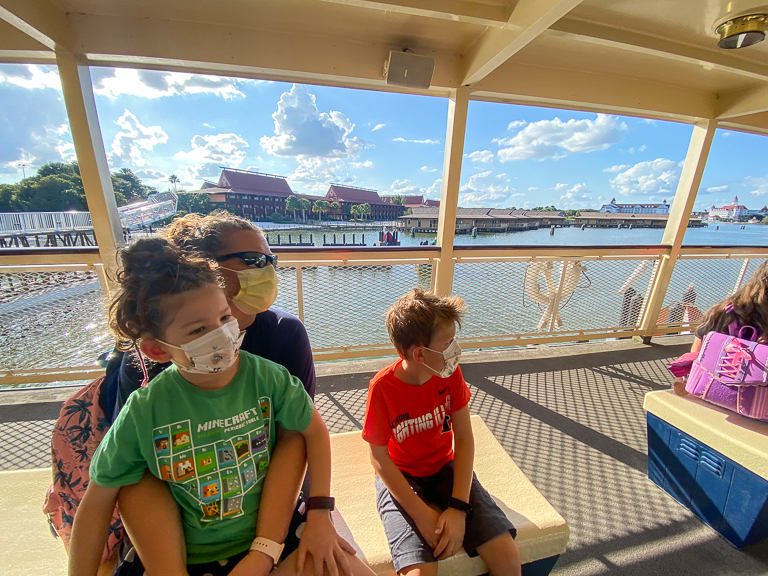 The kids are looking to spend birthday money. We walked into the confectionary shop on Main Street and waved at the people making the treats. They opted to save their money for something else a little later though. 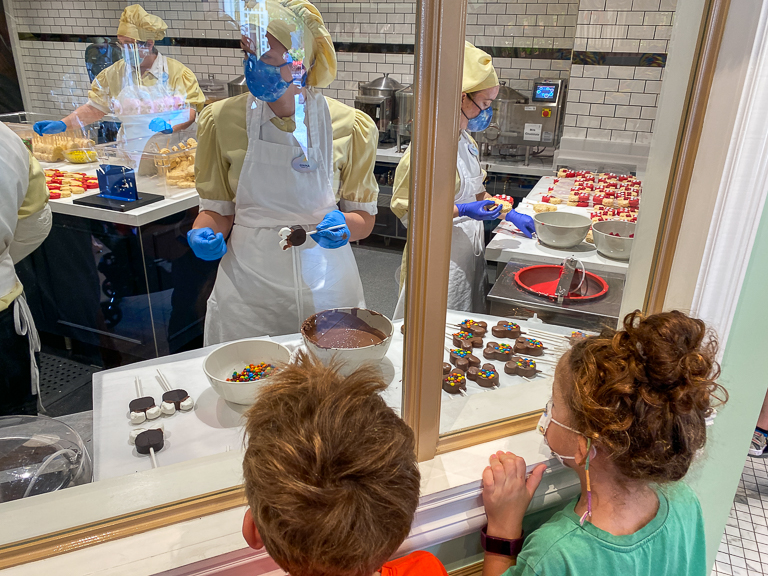 The kids have been wanting to see what the Monsters Inc Laugh Floor is all about. It was only a 15 minute wait. While we were in line, the kids tried to come up with jokes that we could text in to the show. 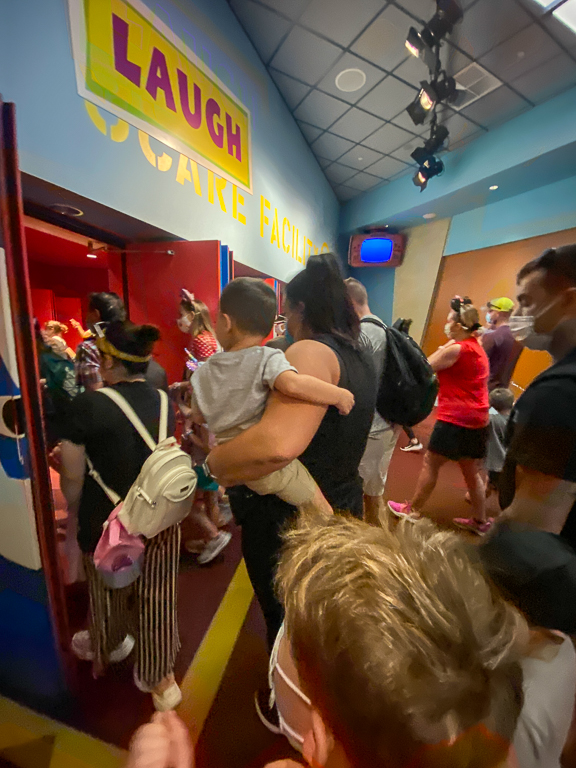 When we got to the scare laugh floor, they even caught me and Ian on the camera. They didn't pick our joke, but the kids had a good time laughing at all the other jokes. 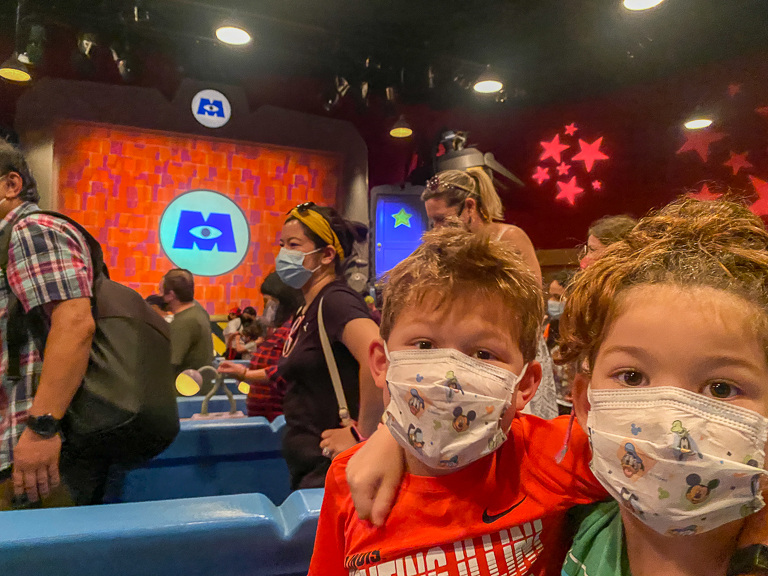 Since it was so close by and had a short wait, the kids wanted to drive around the Tomorrowland Speedway. 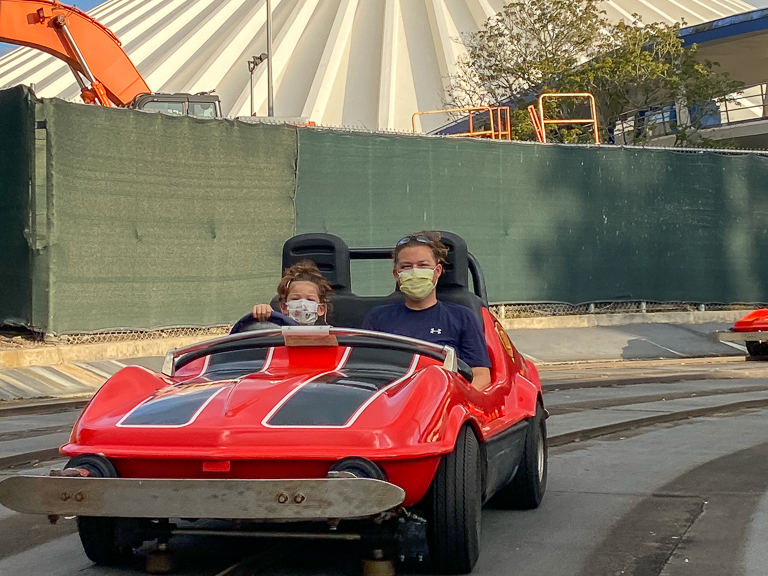 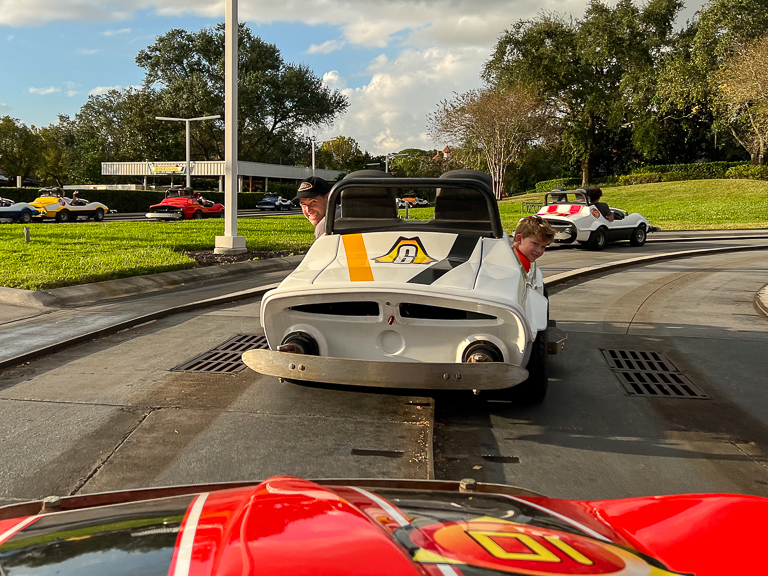 The popcorn doesn't get any more fresh than this. 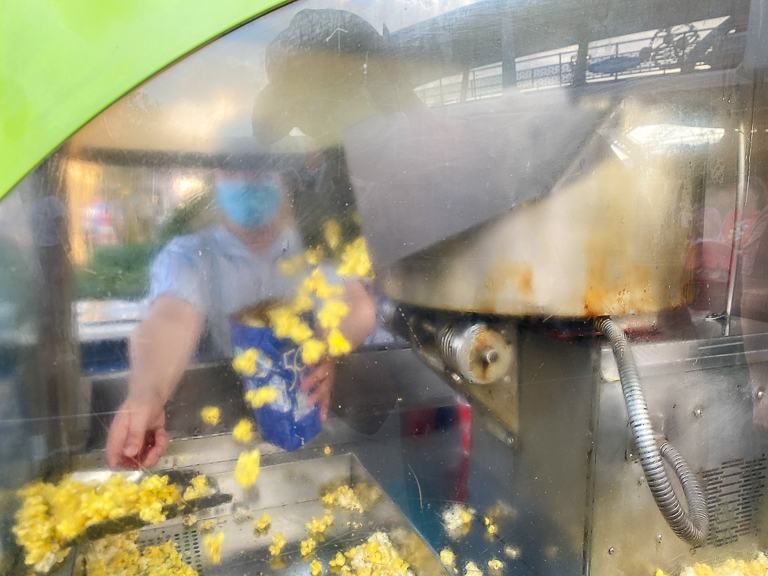 Before dinner, we're pretty much just looking for rides that have a short line. It's busy at the parks, but as the nights go on, it will get better. 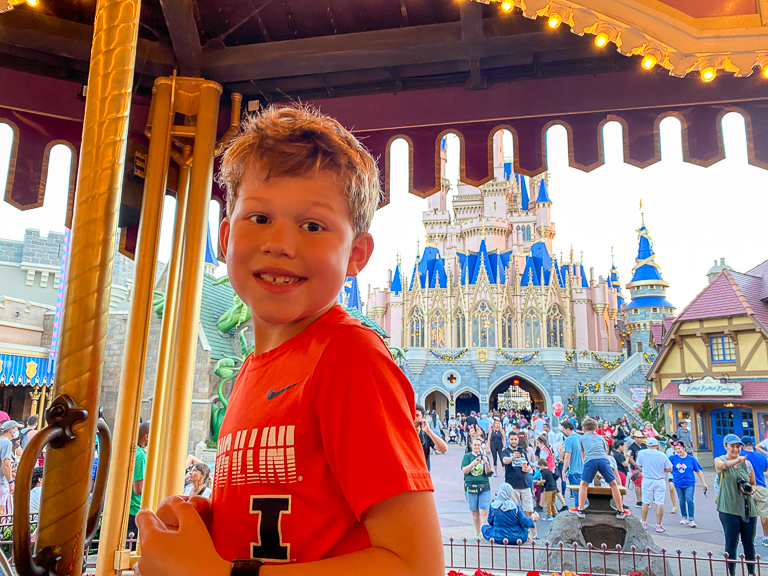 I think we're going to start changing our strategy for going to Disney World. Rope drop in the morning is always crazy busy, and short ride lines don't stay short for very long. At the end of the night though, since the kids can stay awake, we can get in a lot more of the good rides. 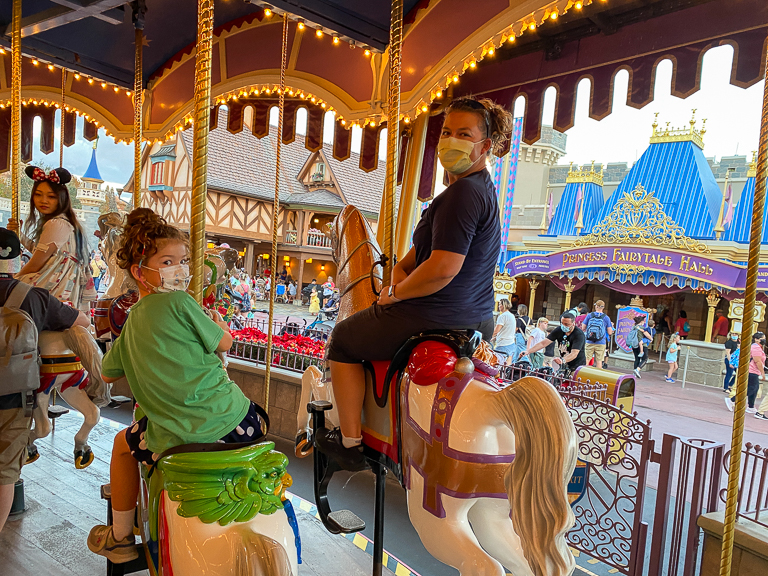 After dinner, the four of us rode on Goofy's Barnstormer. It's short, but so is the line. 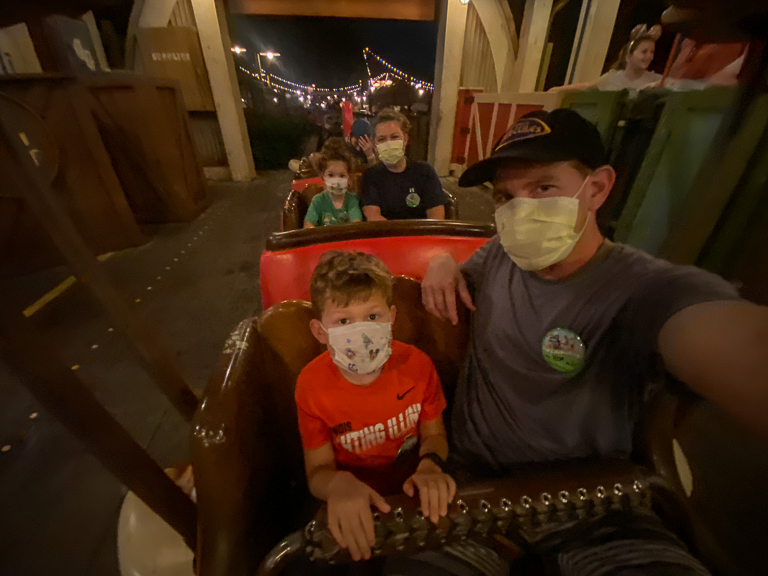 I had to get the kids over to the Country Bear Jamboree. They love The Enchanted Tiki Room with singing birds, so why wouldn't they like to see singing bears? For some reason though, they weren't as in love with it as I was hoping. Maybe it was "Blood on the Saddle" by Big Al, or "Mama don't Whip Little Buford". I bet the problem is that they haven't seen it enough. A few dozen more times in here and they'll start to love it. 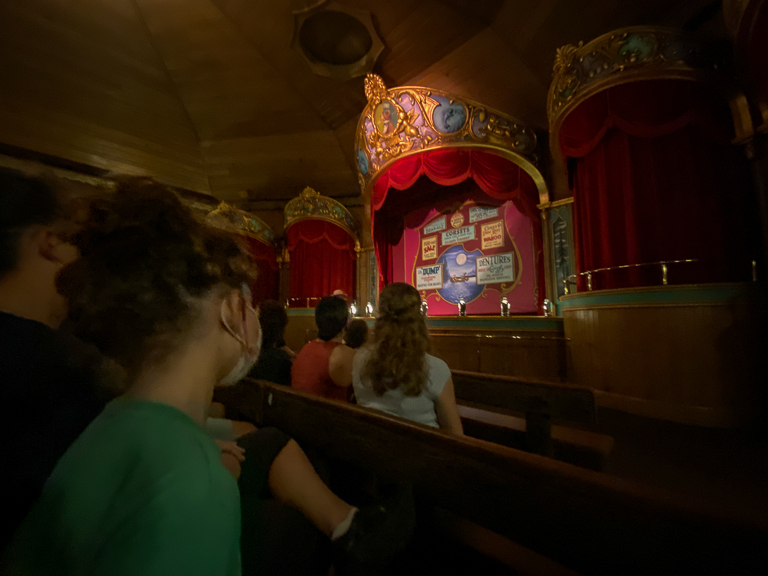 Now this is something worth spending birthday money on. Dole Whip! The kids opted for a Raspberry-Pineapple swirl. 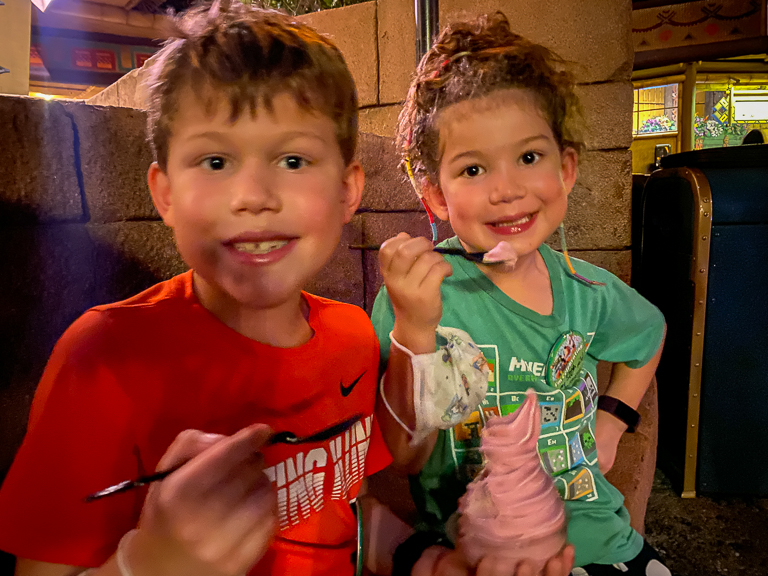 Ugh. It's not in focus, but you can still see the shock and horror when they found the ever-present "Void of Disappointment" in their Dole Whip.
Alli - Rude!
Ian - So rude! 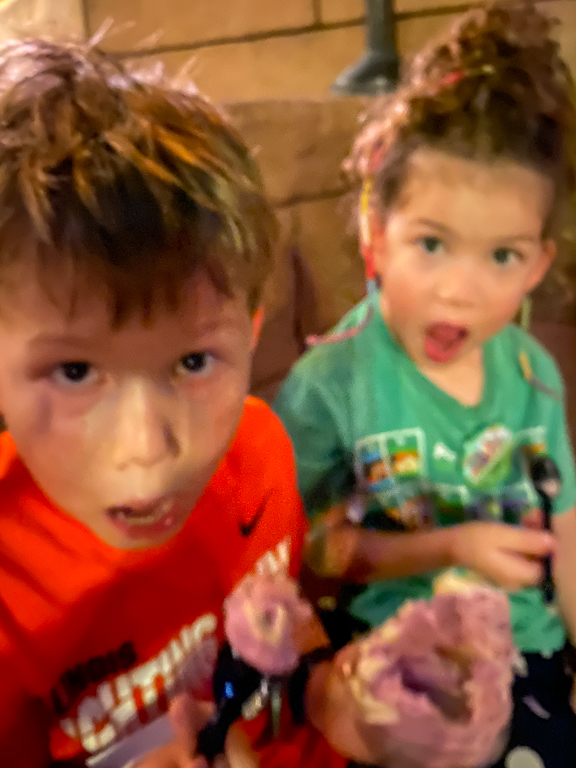 Theresa and I tried the Pineapple and Coconut Swirl. It was tasty! 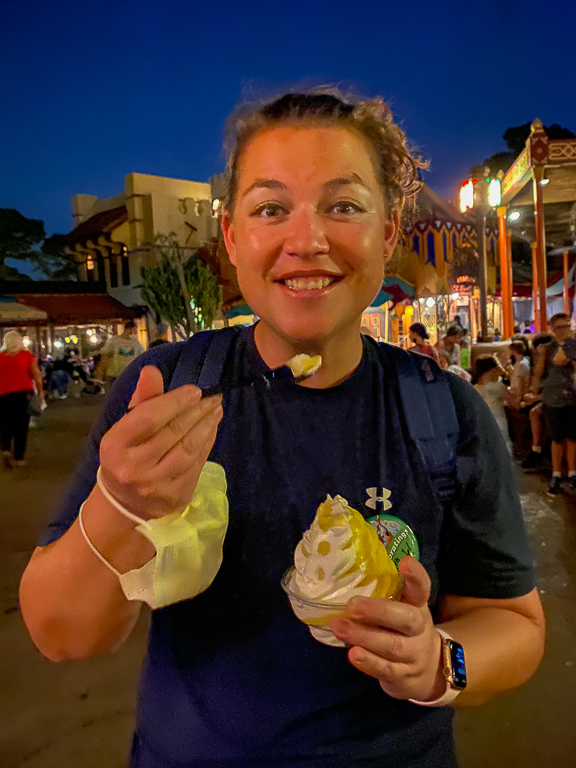 When the fireworks are going off, the wait times for the rides goes way down, even if Disney's signs don't change to show it. We've seen the fireworks already in front of the castle, so we're just happy to be riding something with a short line. 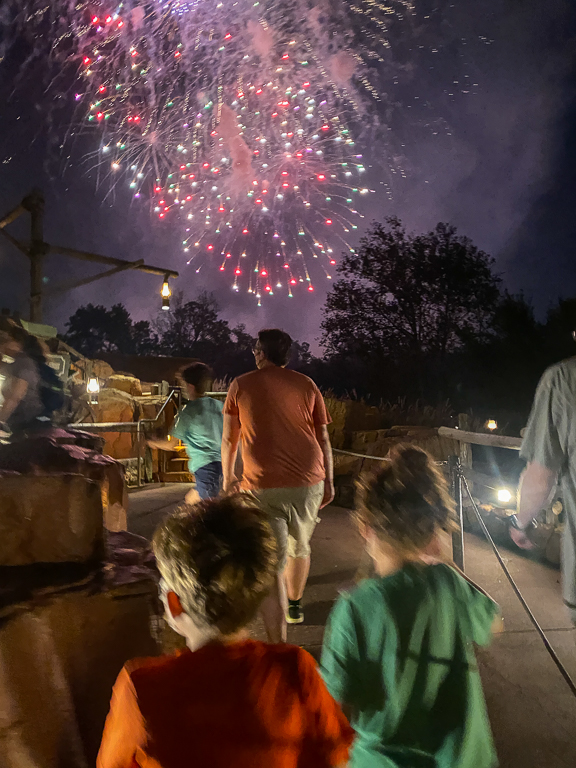 And it's pretty cool to watch the fireworks from the roller coaster tracks. 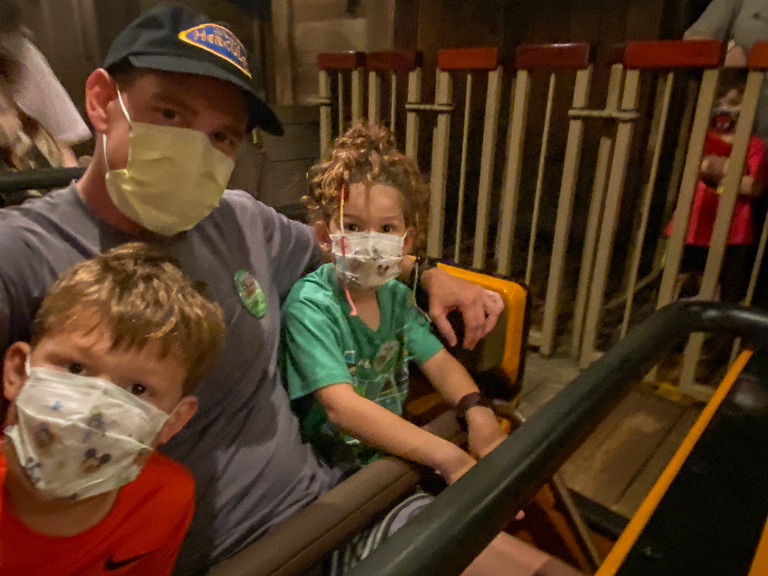 Afterwards, the four of us rode it's a small world. 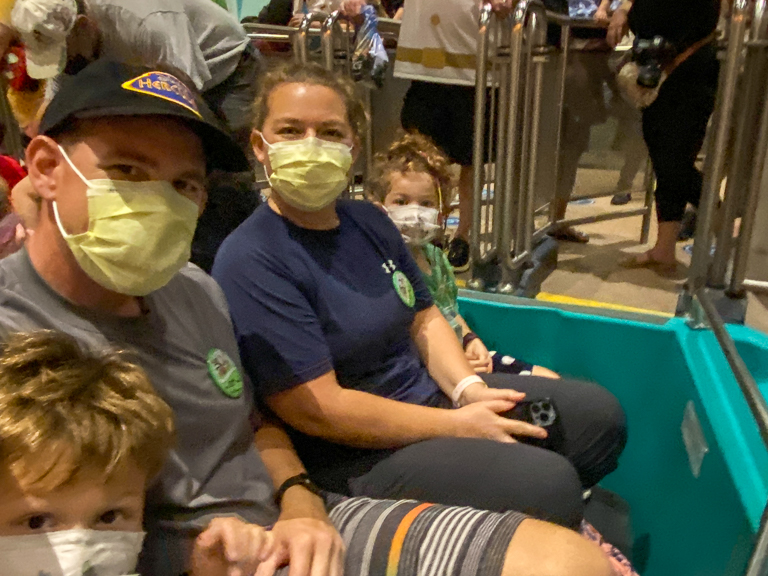 Then the Tea Cups. 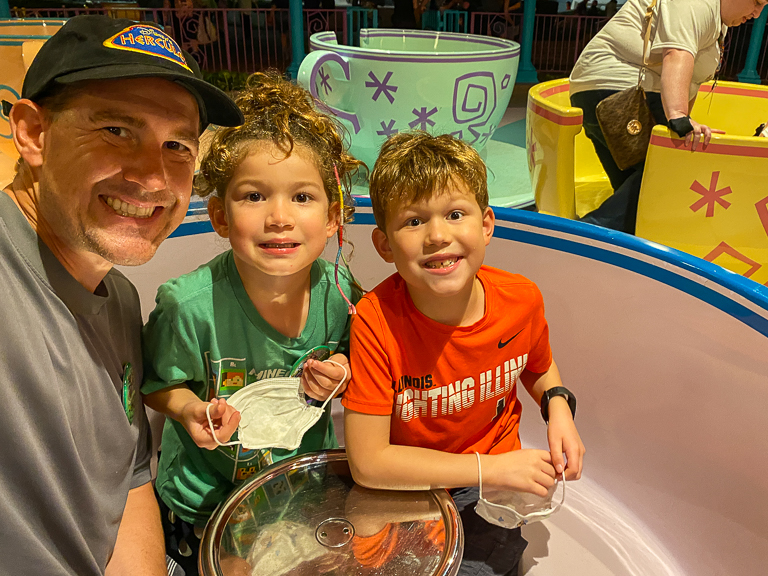 I took the kids on Dumbo. Ian loves that he's old enough to ride all by himself now. It's come in handy a few times on roller coasters. 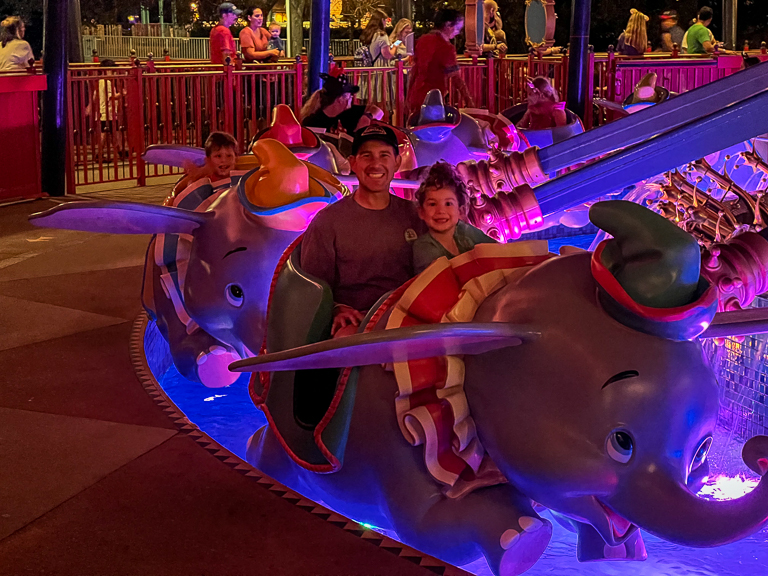 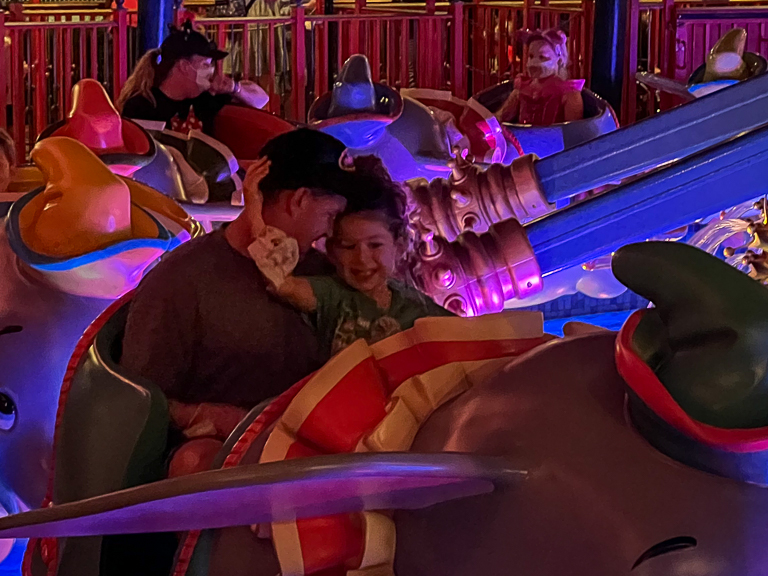 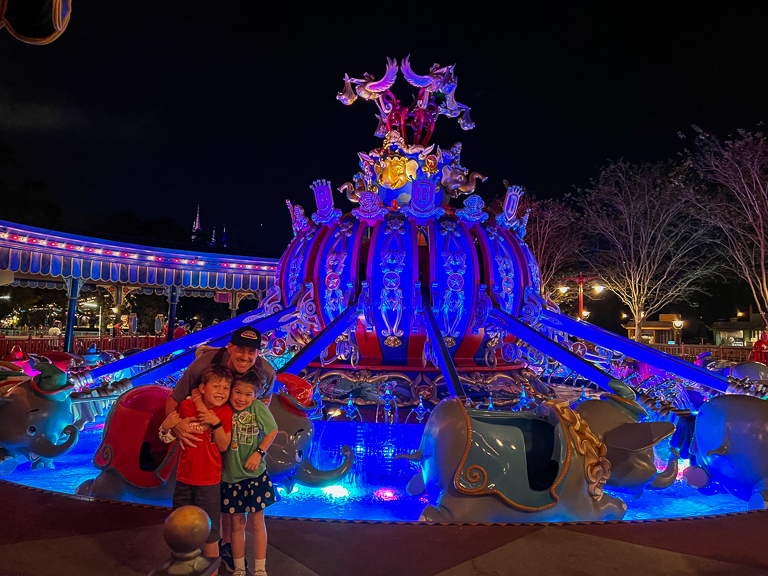 The park closes in 5 minutes, which is the perfect time to jump in line for a ride that always has a crazy wait time. Throughout the day, the Seven Dwarfs Mine Train posts wait times over 100 minutes. Now, at the end of the night, the posted wait time is still 65 minutes, but I think that's just to discourage people from getting in line. 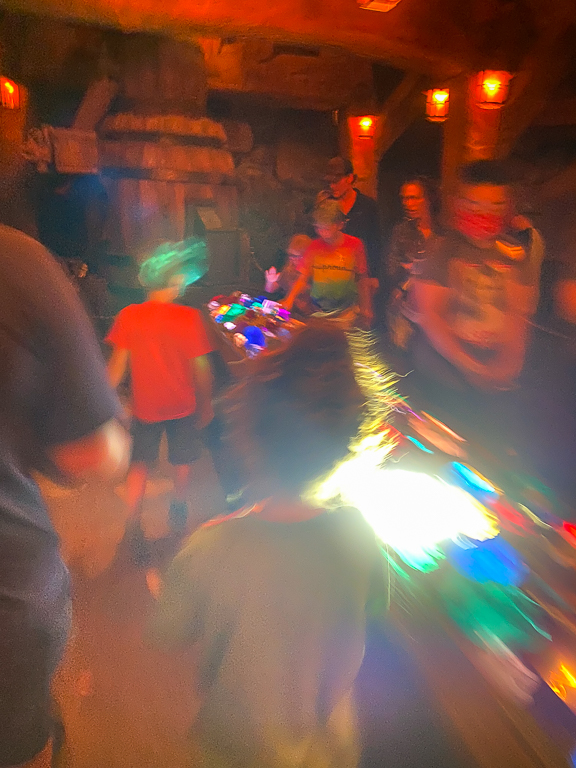 Because just 15 minutes later, all four of us were riding! We're going to close the park out from now on! 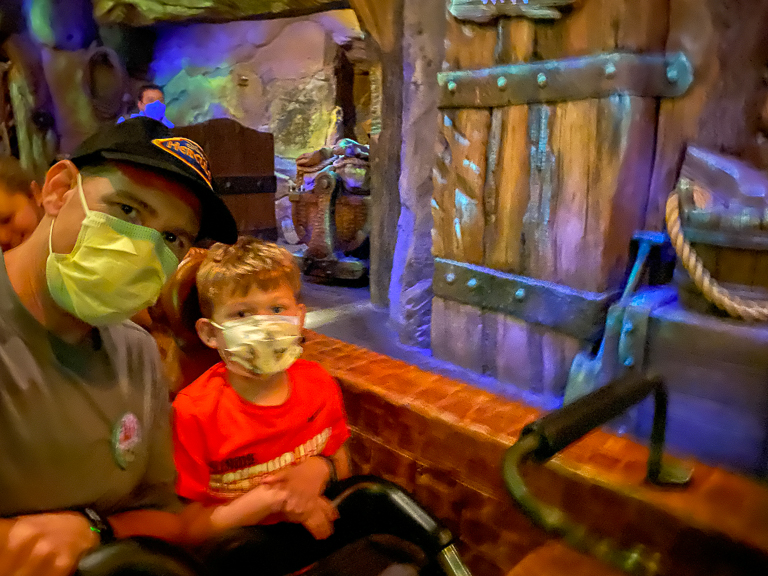 It's been a short, but fun day at the park. Let's do it again tomorrow! 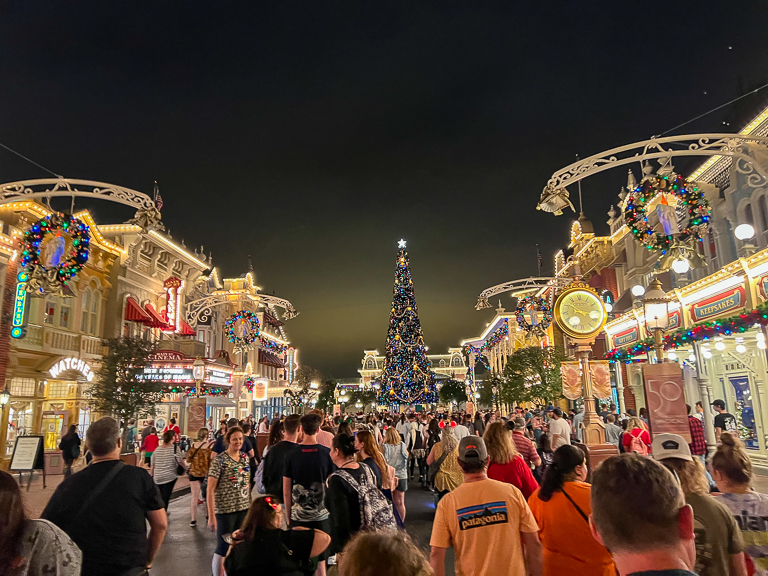