Do you like cheese? Sharp Cheddar Cheese? Then stay tuned to what 3 people called "the best taste test I've done so far." I've done a ridiculous number of taste tests, so that's high praise!

Cabot is a big name in Cheese, and they're located in Vermont! While they don't give factory tours, they do have a farmers store with all the different cheeses they make! Theresa and I had thoughts to do one of our bigger taste tests here, and were amazed by all the different types of cheeses available. In the end, we decided to focus on Vermont and the Sharp Cheddar Cheeses. 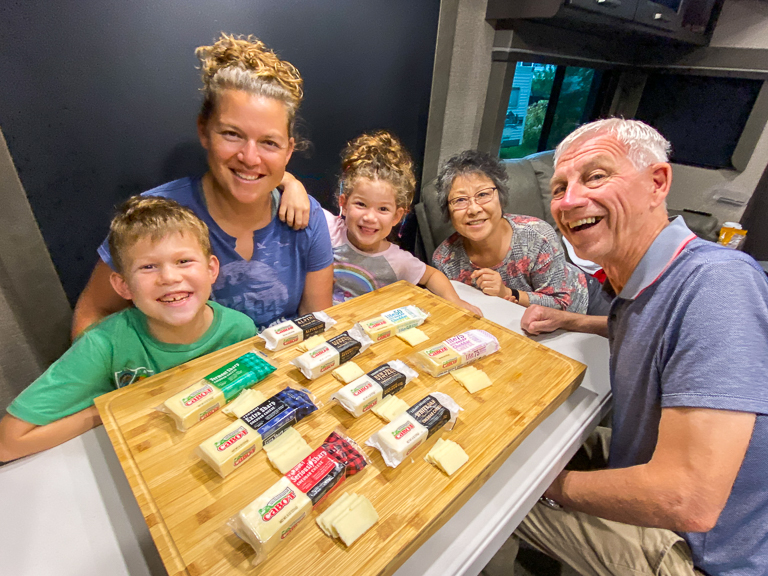 And this time, we're seeing so many people in such a short period, that we get to do this taste test with a whole bunch of people! 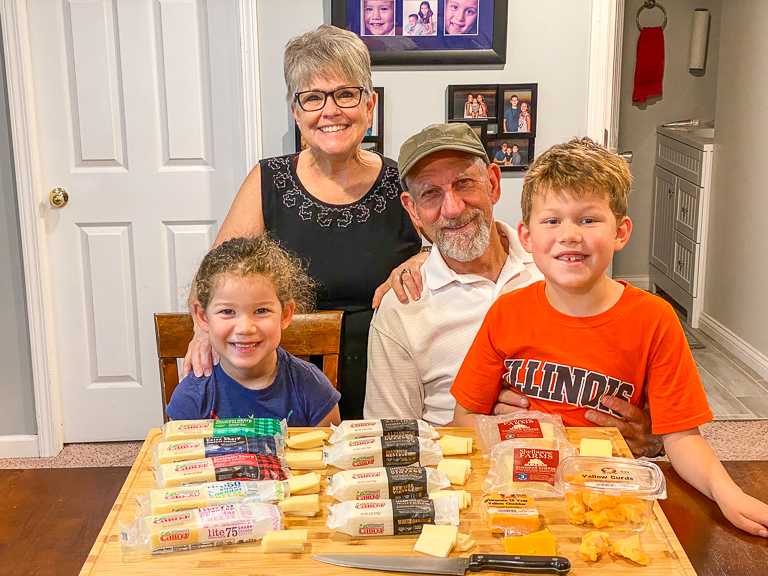 Who knew how different all these different sharp cheddar cheeses could taste compared to each other. 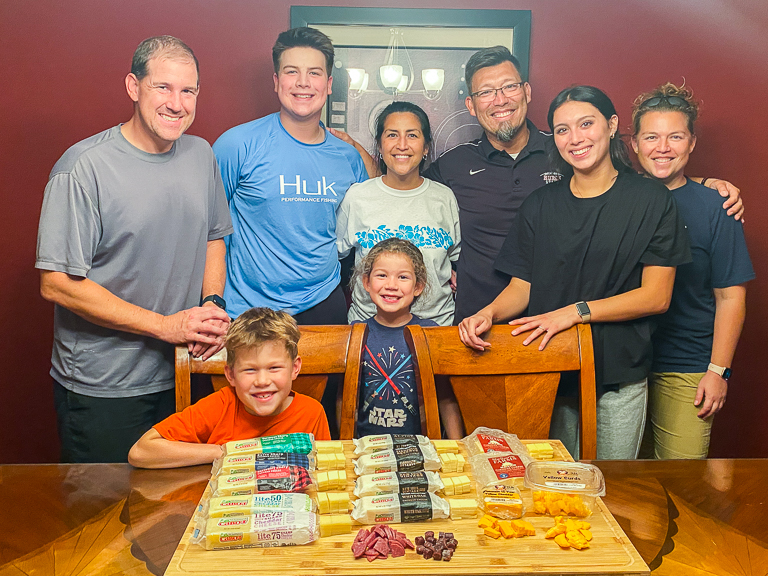 Cabot's normal Farmers store is only open Wednesday through Saturday, and we weren't in the area during that time (2 hours away from our campground). Good thing the Quechee General Store is only an hour away and is open 7 days a week! 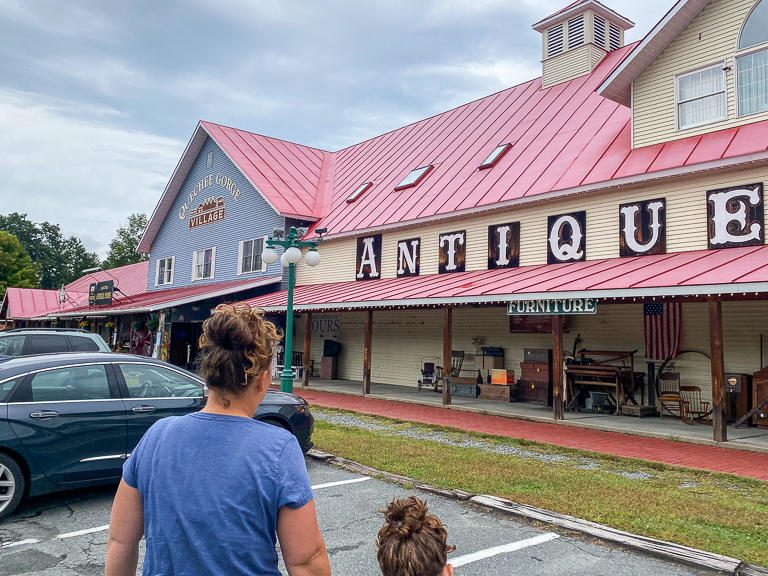 They are the first independently owned Cabot affiliate, and they claim to have "the complete collection of Cabot cheeses". Both the Cabot Farmers Market and the Quechee General Store advertise free samples, and when Theresa and I were here many years ago, it was awesome trying little bits of so many different cheeses. Sadly with Covid, sampling has been suspended in both locations. 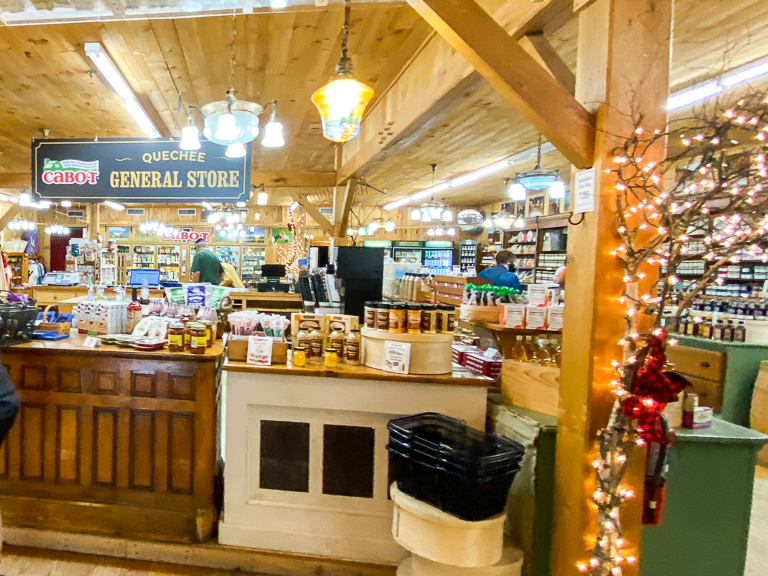 Hey! It's our friends the Coutures! Cabot Creamery is a co-op, owned by hundred of farms throughout New England and New York. The Couture's dairy cows are among the many that provide the milk that makes Cabot's delicious cheeses. 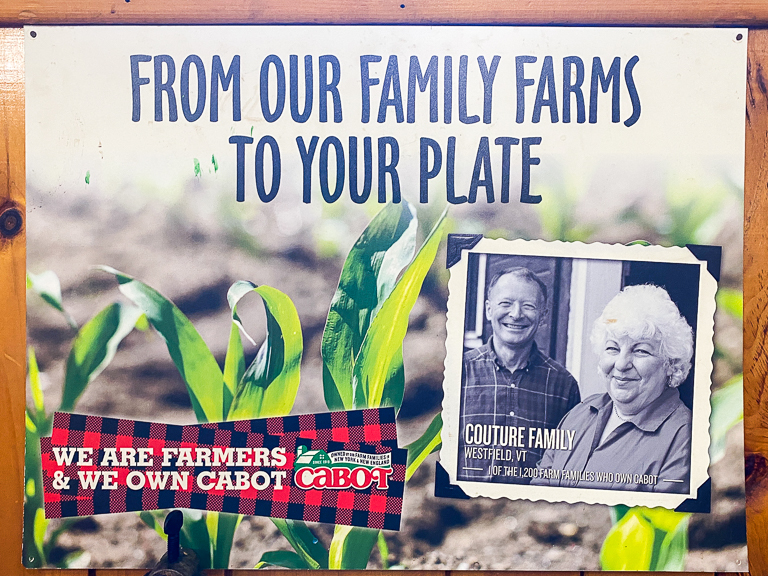 And boy are there a whole lot of different cheeses. There's a ton of different cheddars, flavored cheeses, and non-cheddars like swiss and mozzarella. While that might be fun, it would probably start to be too much to try them all. 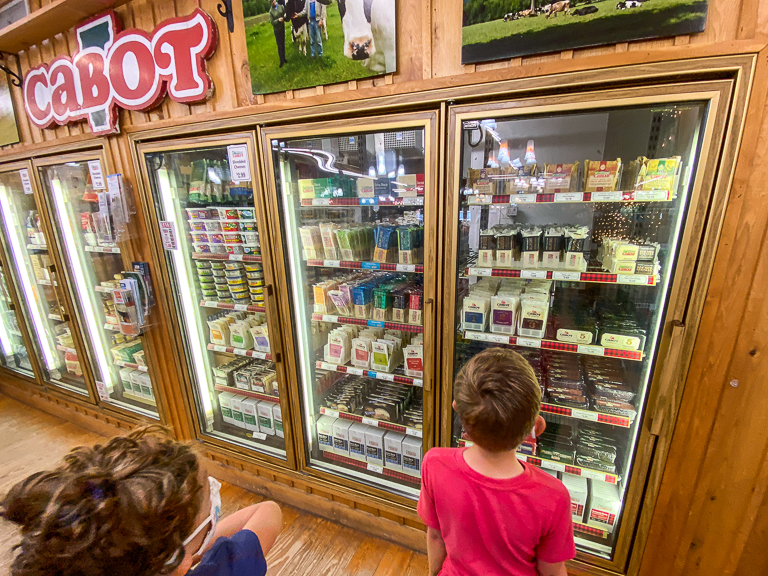 Instead of branching out to the different flavors of cheese or non-cheddars, Theresa thought it would be good to go with a sampling of her favorite cheese. Sharp Cheddar. Of the different kinds that Cabot makes, that are available relatively everywhere, we picked 9 different packages that all stated they were Sharp Cheddar Cheese. Are they going to be that different from each other? We shall see! 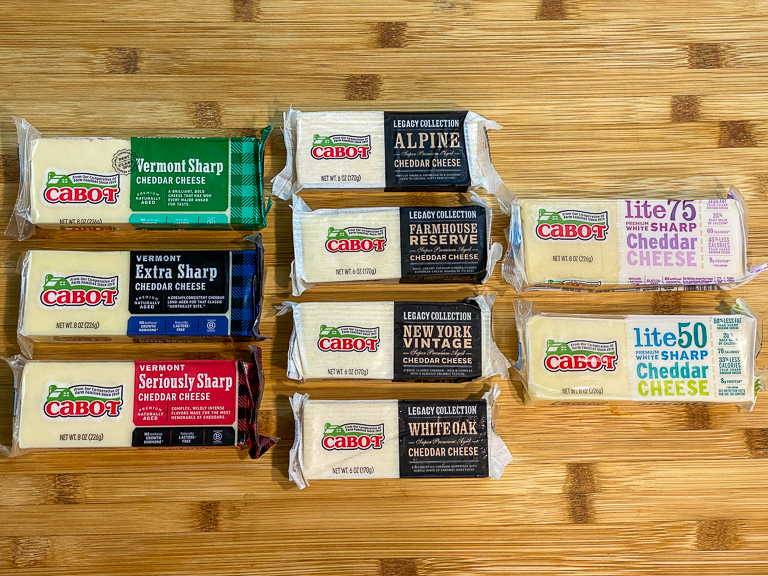 I'm always wanting to get a good photo for the blog, so Theresa helped me open the packages cleanly. 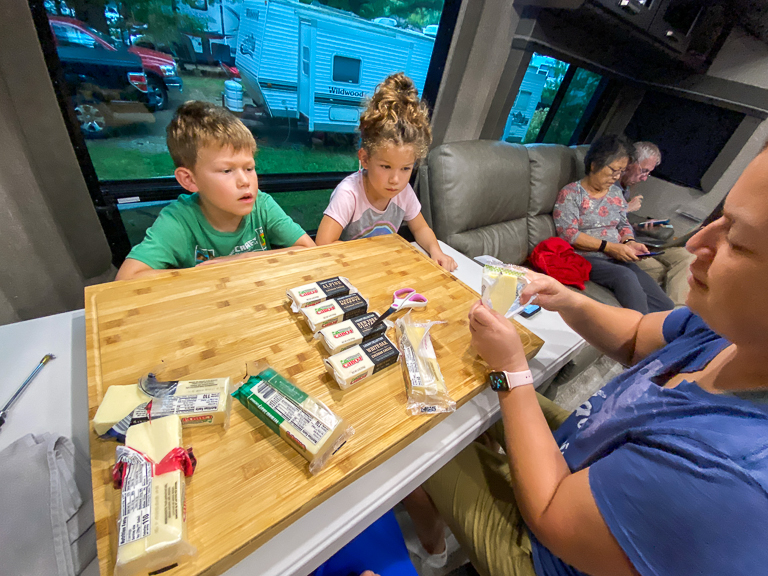 And then I used the Cheese Wire cutter to get slices of sharp cheddar for everyone. 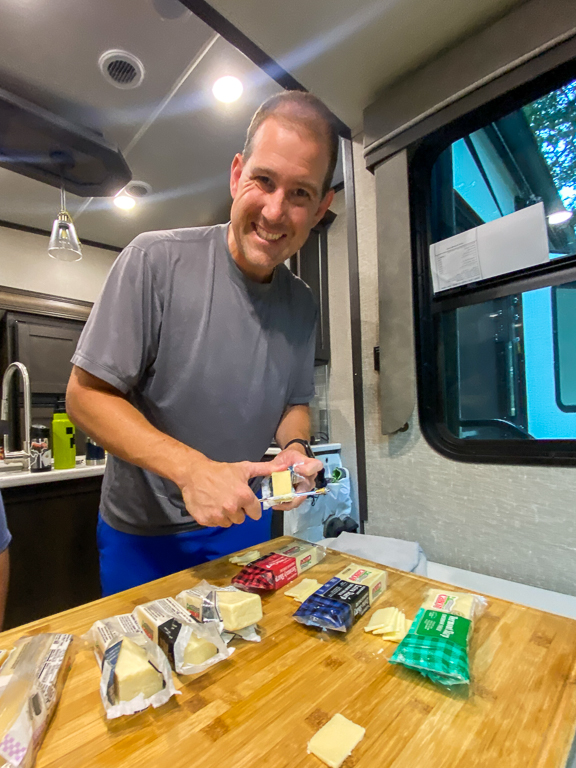 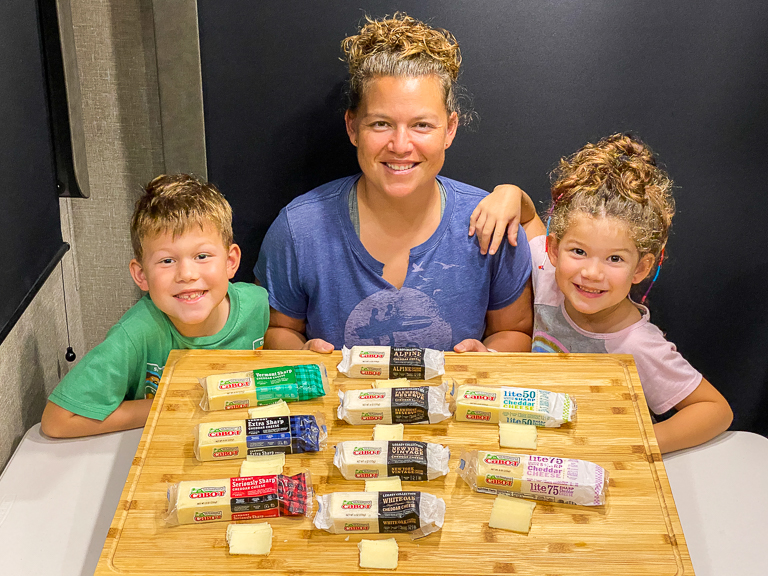 Which Sharp Cheddar Cheeses are we trying today? 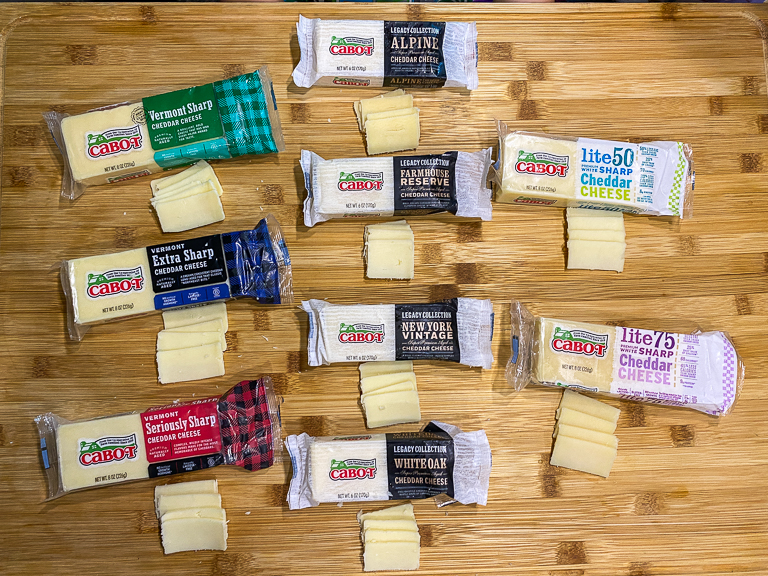 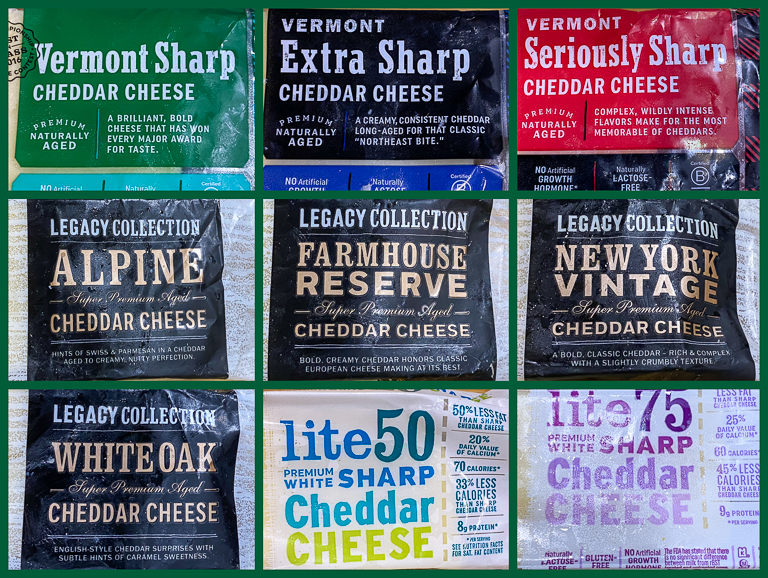 We tried all the different cheeses one by one, and were surprised at the flavor differences between them.
The ingredients in everything, with the exception of the lite cheeses, are: Pasteurized Milk, Cheese Cultures, Salt, Enzymes. That's it! Not even the coloring that turns cheddar orange (it's naturally white). So how can there be such a big difference in flavors? I know aging concentrates the flavors, but it's got to be more than that. 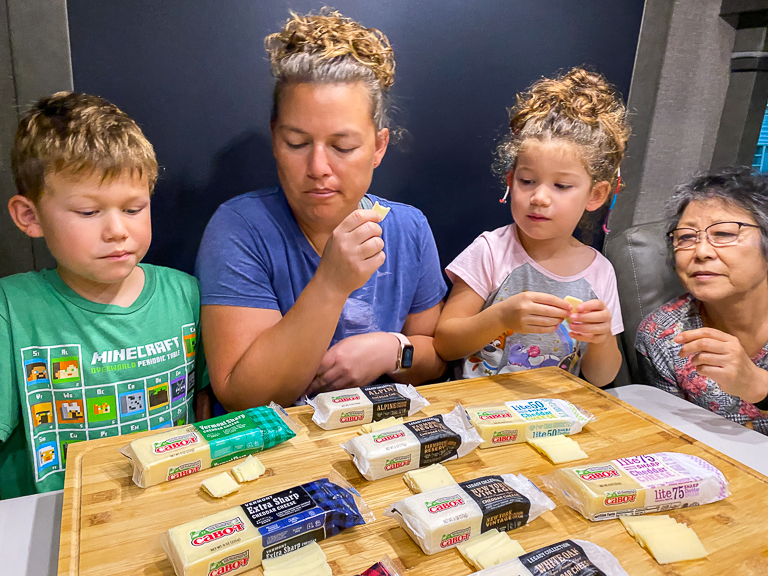 Texture was one other major difference. Some were more creamy and others were more crumbly. 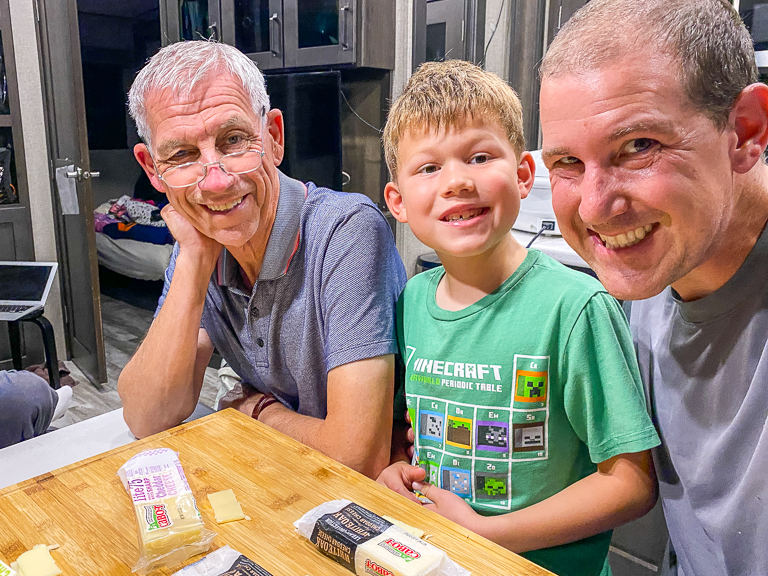 The Lite Cheeses seemed to suffer the most from texture differences. Theresa was hoping one of them might be a good substitute when you're trying to watch your calories. But when you take away the fat, things just don't go well. Fat is flavor and we were missing a lot of that flavor from the Lite Cheeses. 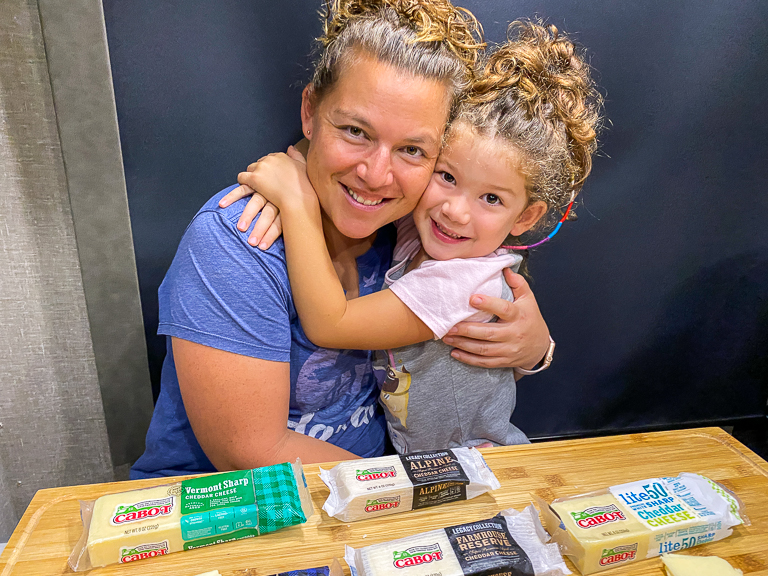 Our travels took us to other farms in Vermont, and while we were at Shelburne Farms, we picked up two more sharp cheddar cheeses.
10. Shelburne Farms Extra Sharp 2 year old Cheddar Cheese
11. Shelburne Farms Reserve 3 year old Cheddar Cheese
Further travels into Michigan to the Frankenmuth Cheese Haus brought us 2 more cheeses, though only one of them is a sharp cheddar.
12. Wisconsin 15 year Yellow Cheddar - Aged for 15 years to develop rich and complex flavors. Forms crunchy pockets of calcium lactate. $79.99 per pound!
There's also Yellow Cheese Curds, with bits of cheese that are quite fresh, squeaky, and haven't had any time to age. It'll be a good comparison to the differences between the freshest cheddar you can get, and all these sharp cheddars. 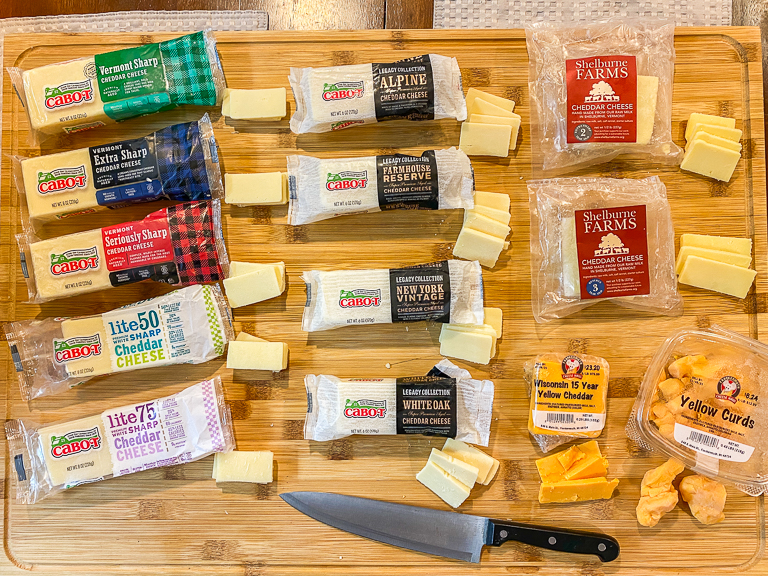 My family, especially my mother, are big cheese lovers. At dinners growing up, it wasn't uncommon to have a block of cheese on the table with dinner. 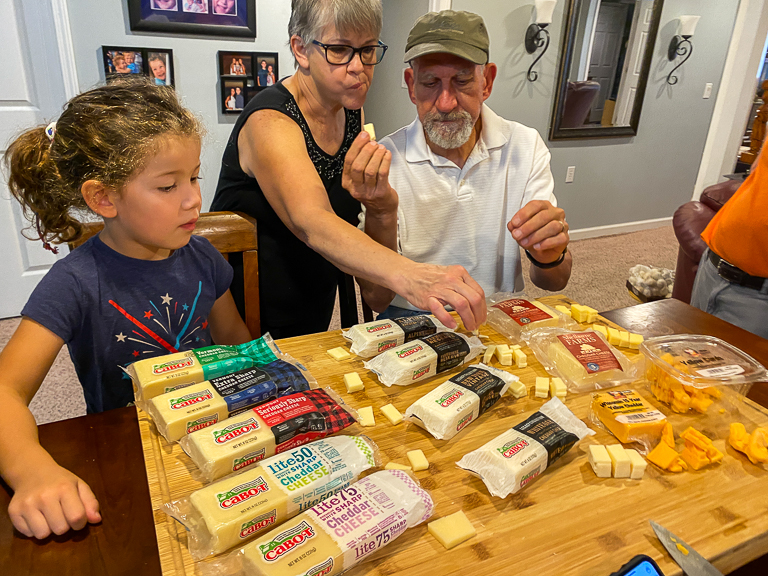 The Michigan crew loves cheeses too! We had a fun taste test back in 2014 with them with lots of different aged cheeses from the Frankenmuth Cheese Haus. 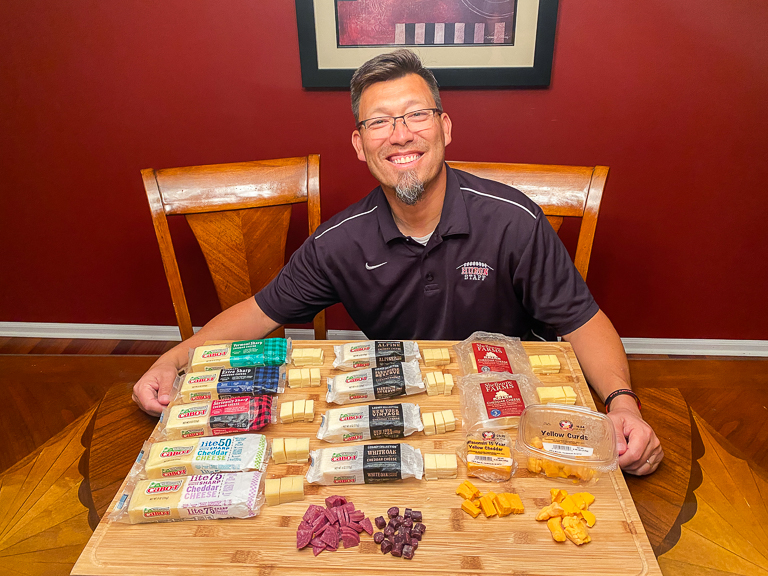 So with so many different people tasting, what are everyone's thoughts?
1. Vermont Sharp Cheddar - Ian likes it, though it isn't as good as Tillamook. It's a sharp cheese that is very tasty. We can see why it won awards. It just tastes like a sharp cheese. Nothing extra and no special flavor notes.
2. Vermont Extra Sharp Cheddar - Tastes a little more creamy than the Sharp Cheddar. Not Theresa's favorite since she wants more crumbly than creamy. It does have a sharper flavor.
3. Vermont Seriously Sharp Cheddar - It just gets better and better! Going from Sharp to Extra Sharp to Seriously Sharp, this one is great! Many people liked tasting the progression from Sharp, Extra Sharp, and Seriously Sharp.
4. Alpine Cheddar - Yum! There is a Swiss and Parmesan flavor to it! It's different, and tastes delicious! It has a good crumble. It's a dryer cheese. Theresa said that Alpine is like Switzerland in her mouth.
5. Farmhouse Reserve Cheddar - It's another creamy cheese. Not like we'd turn down someone giving you some. There's a little bit of a bitter or acid taste at the end. It's a little sour.
6. New York Vintage Cheddar - This one also has an acid flavor at the end. It almost tastes like you're going to get one of those calcium crystals in it that you typically get with aged cheeses. It's got a lot more "bite" than some of these other ones, but a lot of people didn't like it.
7. White Oak Cheddar - It has a sweetness to it and has a great flavor. It just tastes different than your typical sharp cheddar. Love it! 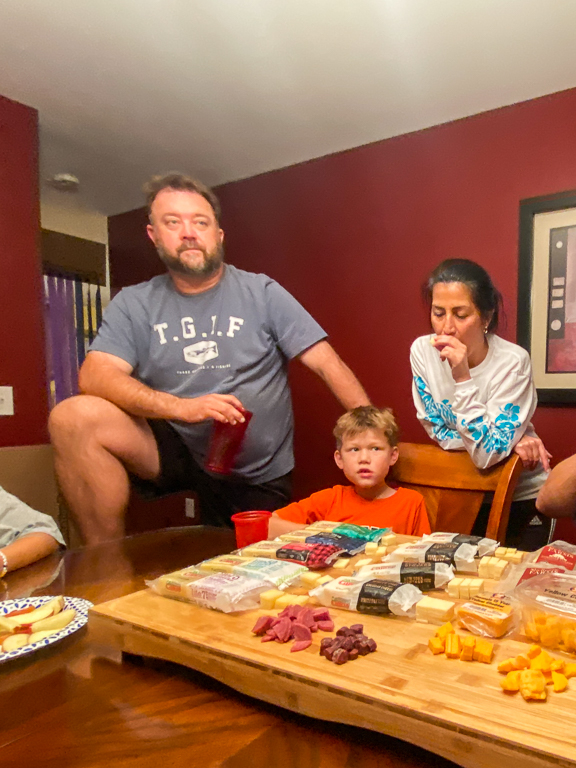 8. Lite 50 Cheddar - Not much flavor to it. Despite saying it's a sharp cheese, it does not taste like a sharp cheese. Especially since we're comparing it to the others. Ian couldn't taste it. Sheila thinks it's just okay cheese, but it's not a sharp cheese. The texture is a bit rubbery.
9. Lite 75 Cheddar - After all the other sharp cheeses, it tastes like nothing. It's a little better than string cheese. The texture is a bit waxy and dry. Between the Lite cheeses, I prefer the 75 over the 50 for texture. It's more firm than the Lite 50. As far as flavor goes though, the 50 has more taste.
10. Shelburne Farms 2 Year Cheddar - Too sour. Totally don't like it. Donald compared it to a stinky cheese. If you like those, maybe you'll like this one a little better.
11. Shelburne Farms 3 Year Cheddar - Don't like these. Sheila wants to rinse her mouth out. It might be okay shredded on something, but not by itself. Why are these so sour compared to the other cheeses? That's really odd.
12. Wisconsin 15 Year Cheddar - Whoa! It's strong! Very pungent, but good for some. You can't eat too much of it. Others thought it was just too strong to the point of not being pleasant anymore. I think it's good, but not head and shoulders above the Alpine. For $80 per pound, I think I'd prefer something else. 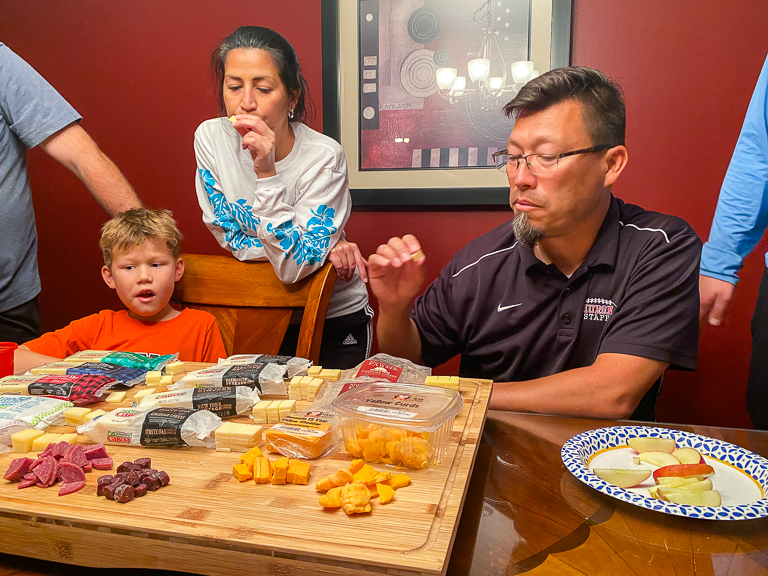 What are everyone's favorites? With so many palates, there's a lot of different opinions. No one flavor was a run-away favorite, but there were a few that topped everyone's list.
1. Alpine Cheddar - Theresa, Joe, Ethan, Alli, Rita
2. Vermont Sharp - Chi, Ian, Mickey, Sheila
3. Vermont Seriously Sharp - Abby, Tyler
4. Wisconsin 15 year - Donald
5. Lite 50 Cheddar - Jared liked this the best out of all the different cheeses. I don't know why.
6. White Oak Cheddar - It wasn't anyone's favorite, but it was the 2nd or 3rd choice of many.
Theresa said if you just gave her one type of cheese, she might get tired of it, but give her all four (Vermont Sharp, Seriously Sharp, Alpine, and White Oak), and she could just eat them in rounds, going from one to another and not stop.
We figured out that we don't like sour cheeses. Texture matters too. Crumbly is better than creamy or rubbery. It's amazing that all these cheeses have the title "Sharp Cheddar" but they all taste so different! 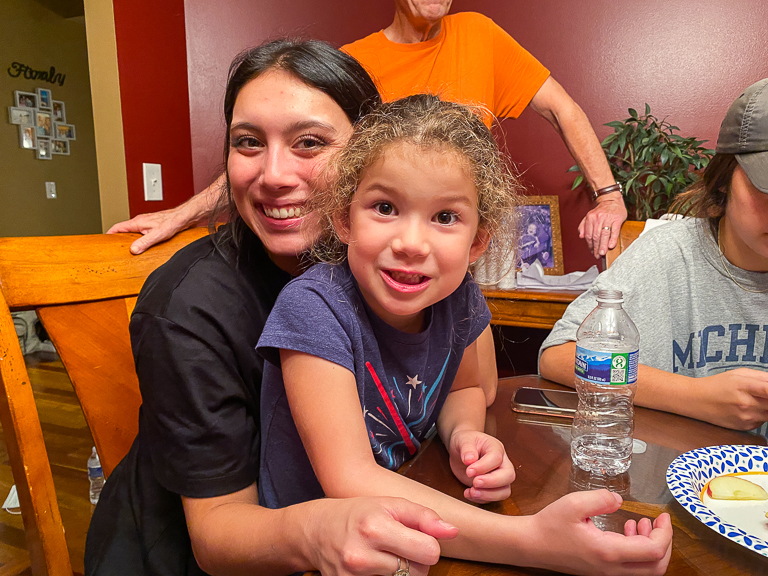