The family has started to mutiny on Sunday Pizza Nights.

See what I'm up against? I enjoy the regular pizza dough most, but it's 3 against 1. Well let's go ahead and make thin crust again this week.

And since I'm making thin crust pizza, I asked everyone to think about their perfect pizza. What toppings would you put on it? Today's pizzas are each person's attempt at making something that will drive their taste buds to sing and dance! 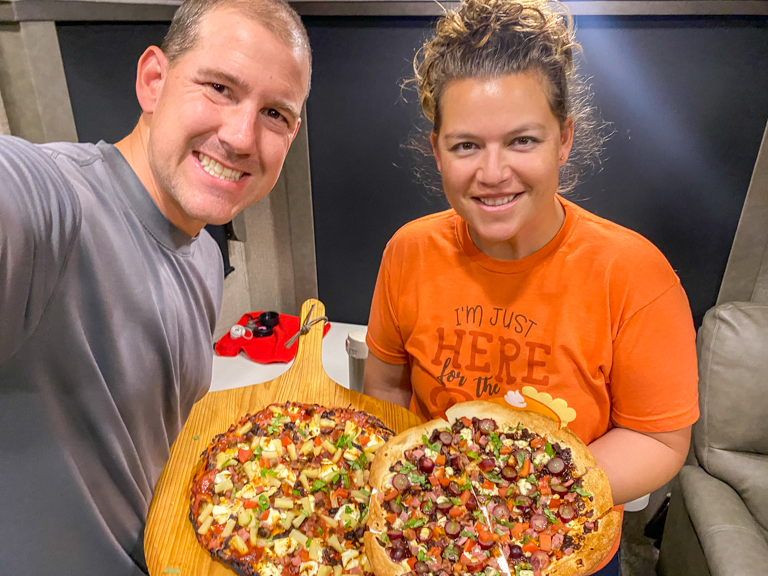 I do like that homemade thin crust pizza dough doesn't take much time to come together. There's no "waiting for it to rise". 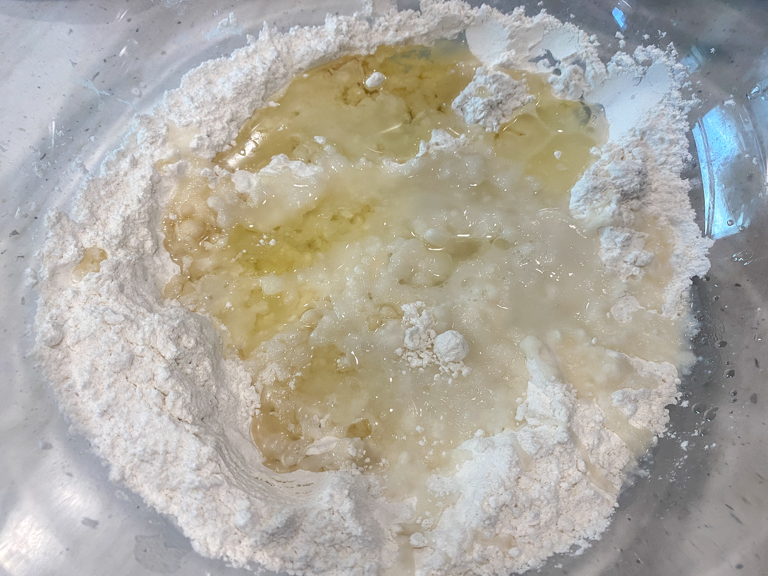 The kids will start us off. They're pretty easy to please. They both sauced it as much as they liked. 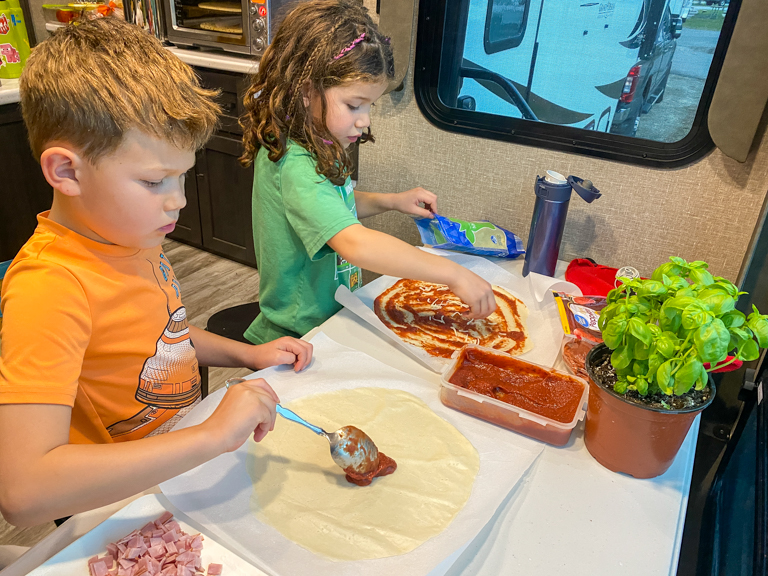 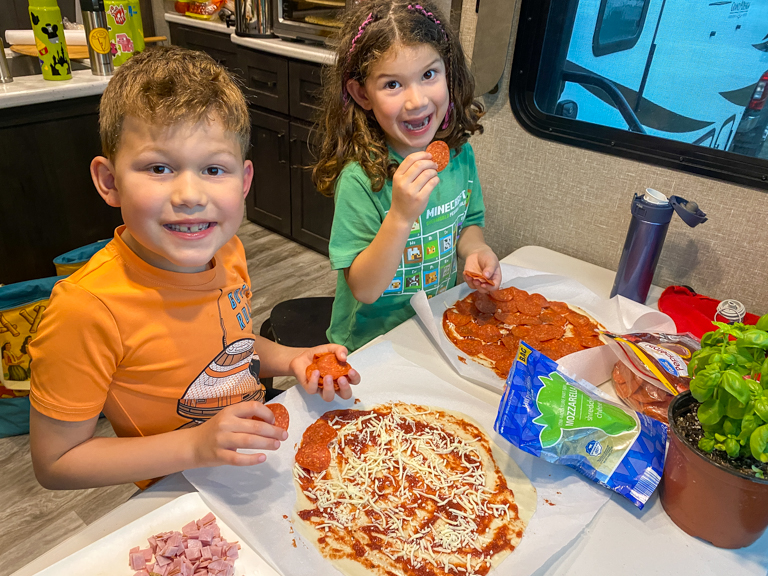 Alli likes hers with a little bit of sausage. She made a "surprise" with a layer of sausage covered by pepperonis.
Ian just likes pepperonis. 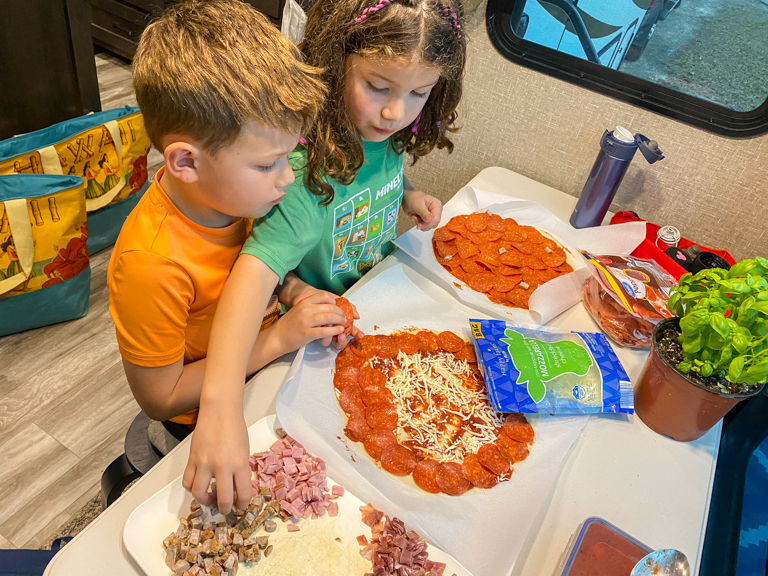 Joe - Are you guys done yet?
Ian - No. I'm still on my first layer of pepperonis. 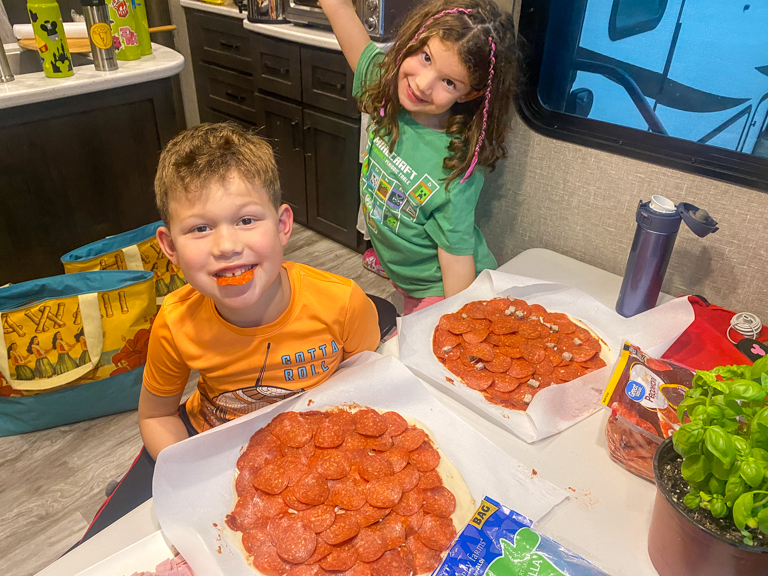 They both cooked well in the toaster oven on 480F and super convection. Alli finished hers off with a little bit of fresh basil. Both of them devoured their dinners. 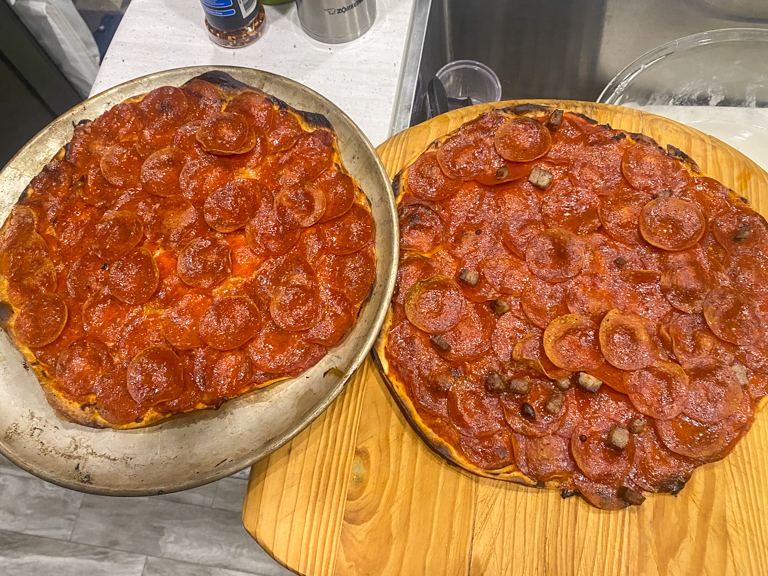 Theresa and I like toppings that are less conventional. While I was getting everything else ready, I spent an hour making a large pot of caramelized onions. When they were done, Theresa went after them with a fork. I had some too. They're so good. 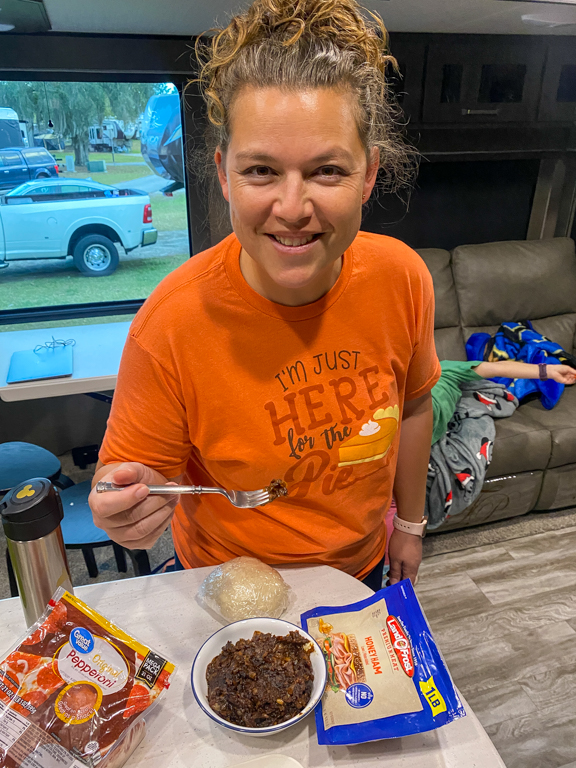 Theresa really likes the Napa Rose pizza that I make, but she also loves the margherita pizza. Why not combine elements of both! 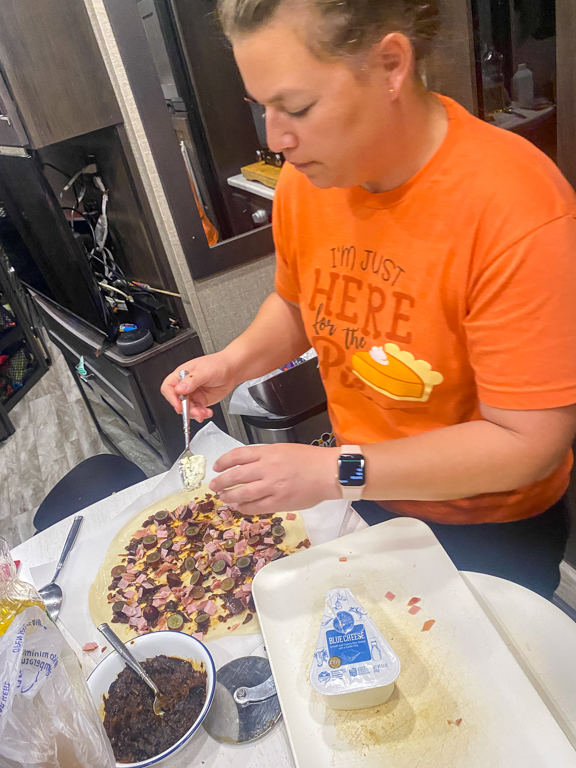 It starts with no tomato sauce, but a lightly oiled crust. Caramelized onions are spread on top, along with prosciutto, ham, grapes, and blue cheese. 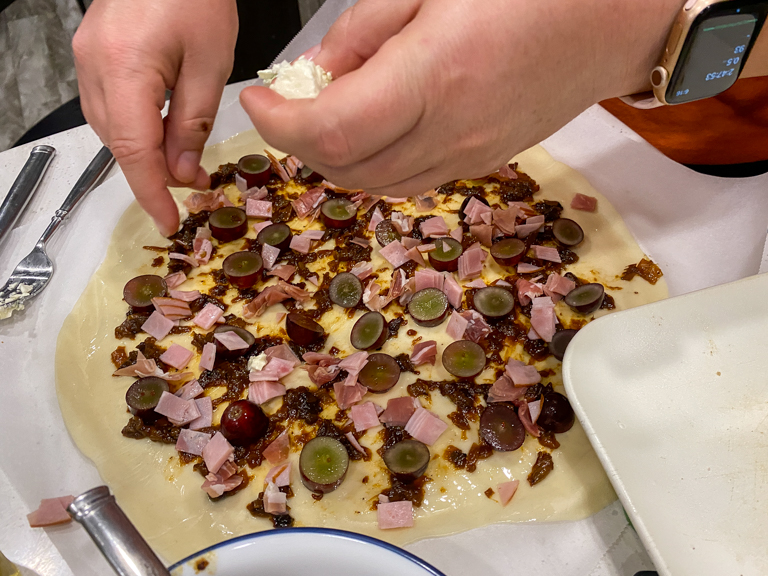 Then freshly diced tomatoes will cook on top of that. 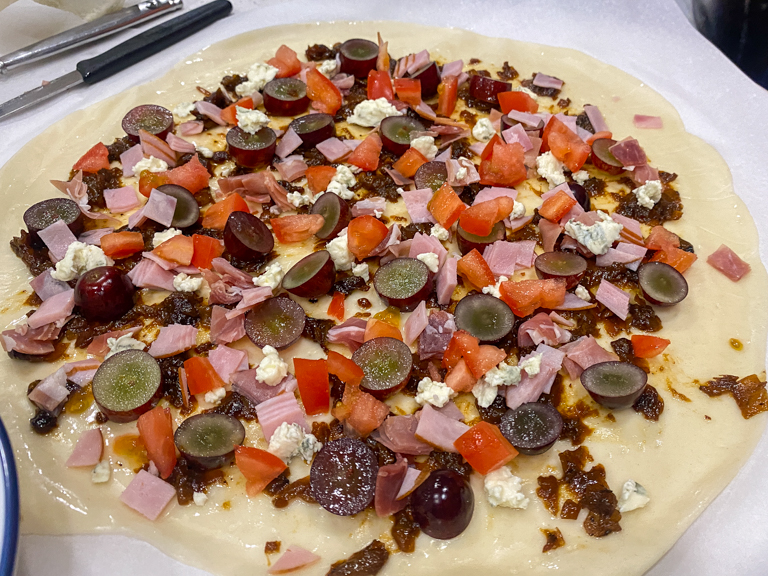 People have asked me what my perfect pizza would look like.
I've always liked lots of meat, so I combined pepperoni, sausage, ham, and prosciutto, along with mozzarella, blue cheese, and big dollops of goat cheese. I like a little heat, so I added red pepper flakes, and for some sweetness, a bit of pineapple. 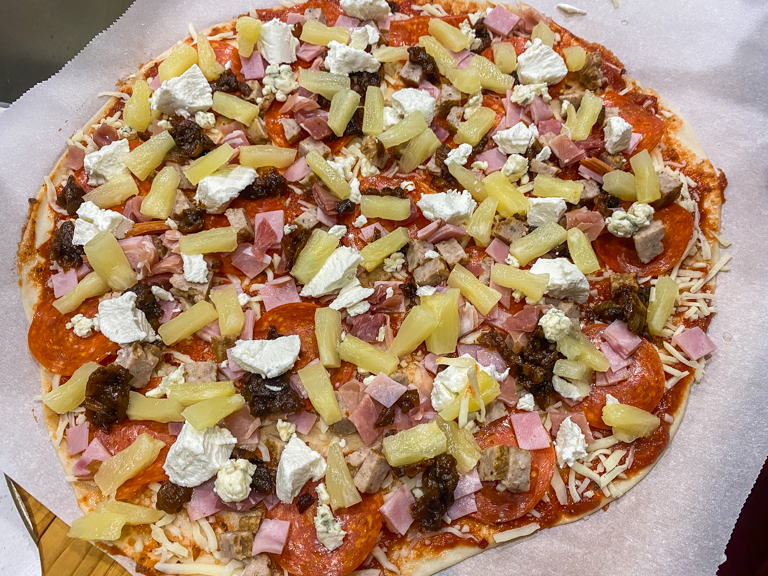 Once the pizzas were done cooking, Theresa added fresh basil from our new plant, and topped it with a balsamic glaze drizzle. 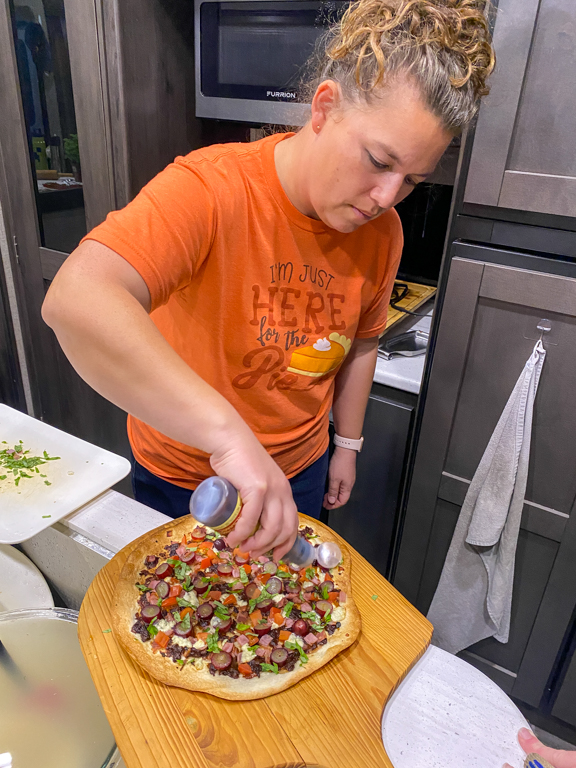 It looked and smelled amazing. 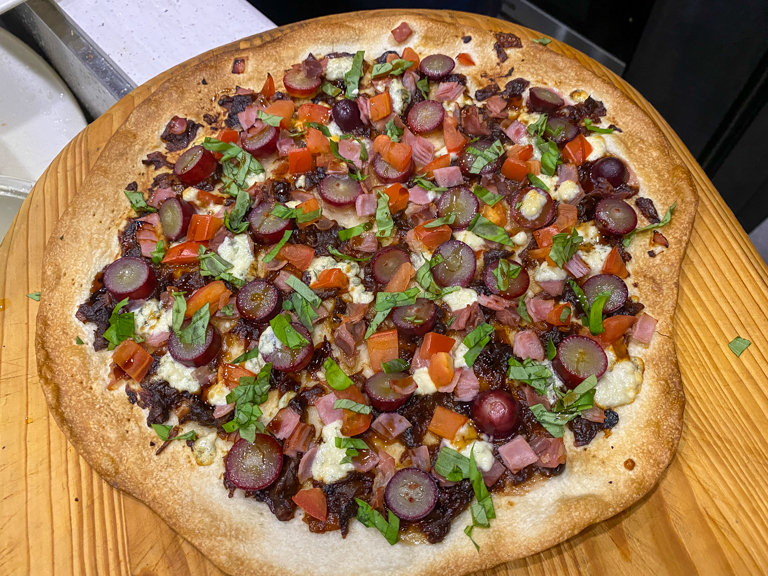 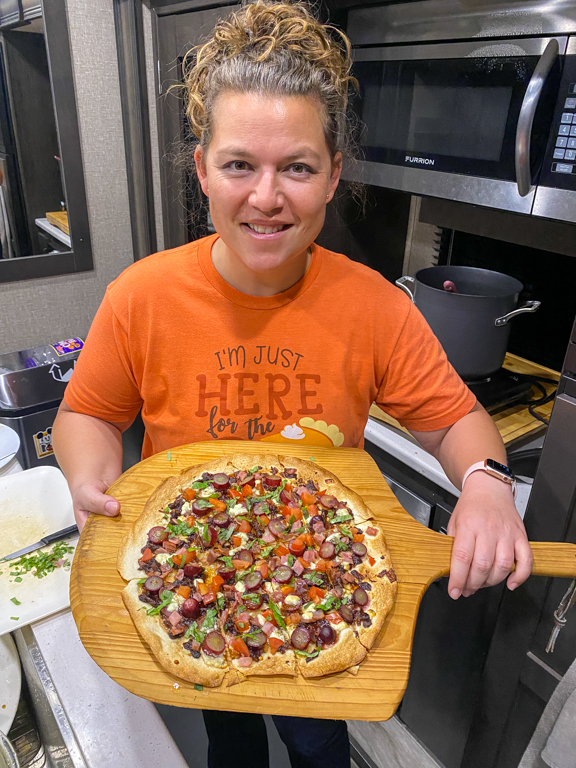 Upon eating it, Theresa was impressed with her own creation. She let me have a slice and I have to say, I was pretty impressed by it too. This is filled with so much flavor! Both the Napa Rose and Margherita pizzas are great on their own. This is better!
With all these specialty toppings, Theresa said this would be an expensive pizza were we to order it from a restaurant. 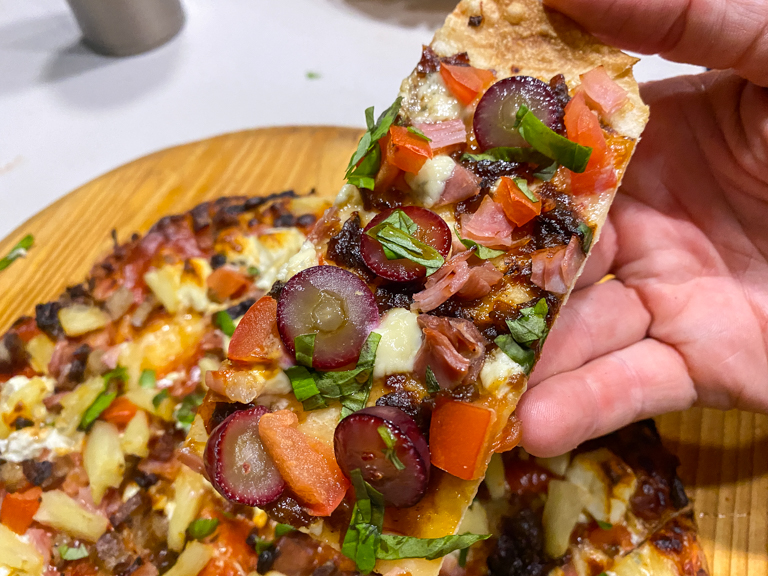 When my pizza was done, I topped it with a little fresh basil too. I thought my pizza was great, but Theresa's might have just been a little better.
After dinner, Theresa tried to convince the kids that we should do thin crust next week too.
Ian - I vote no.
Alli - Me too.
Ian - We should have something that daddy likes. (whispering: But I do like thin crust better).
Alli - (whispering: me too).
We'll just have to see what happens next week. 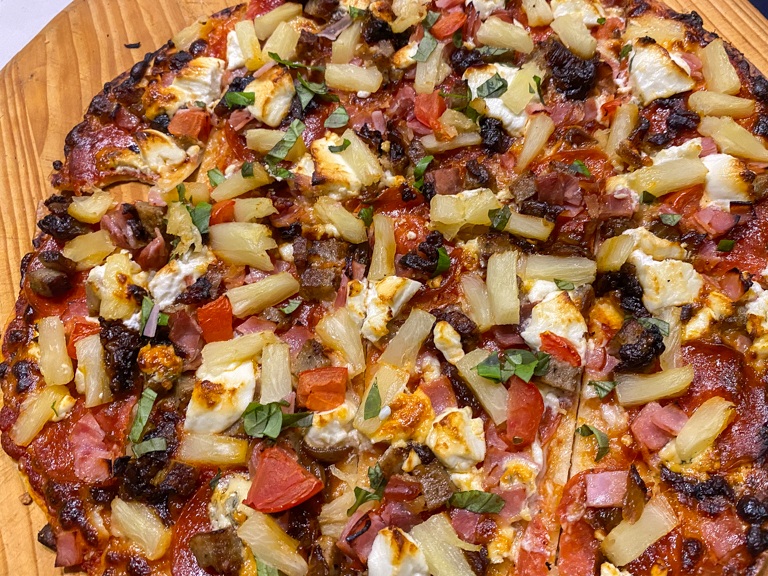