Today is National Chocolate Cake Day! Oreo must have been paying attention because just a few weeks ago, they released a new flavor. The Ultimate Chocolate Oreo! 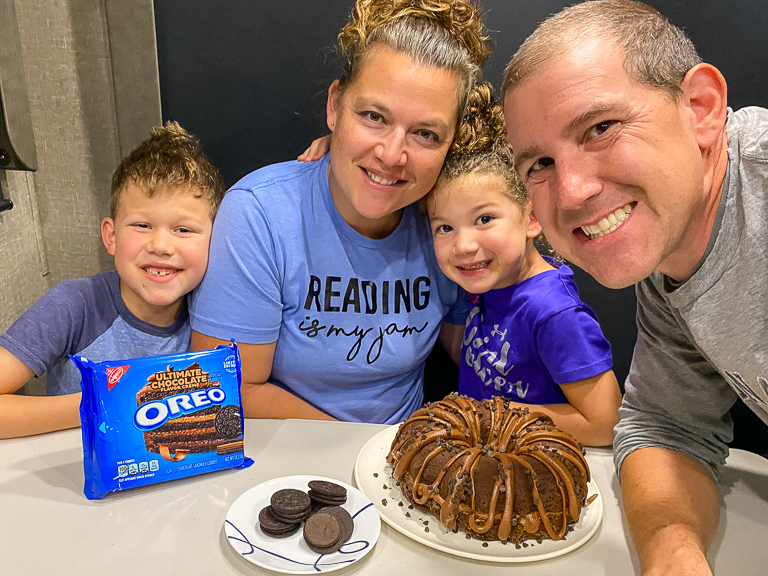 On the packaging there is a picture of a chocolate cake, so like we do around here, we're going to make our version of the ultimate chocolate cake to compare it to. Let's get started with this taste test comparison! 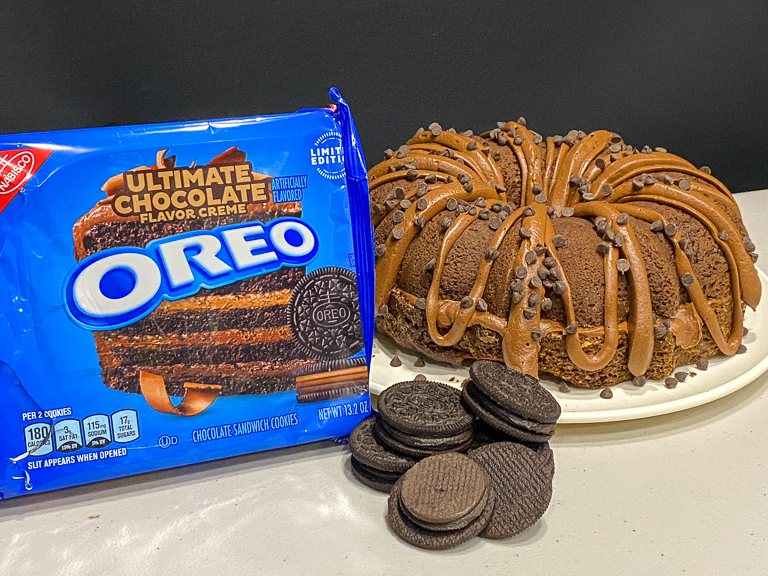 When the kids found out we were making chocolate cake, both of them really wanted to help out. They took turns adding different ingredients to the bowl. Like Betty Crocker chocolate cake mix and chocolate pudding. 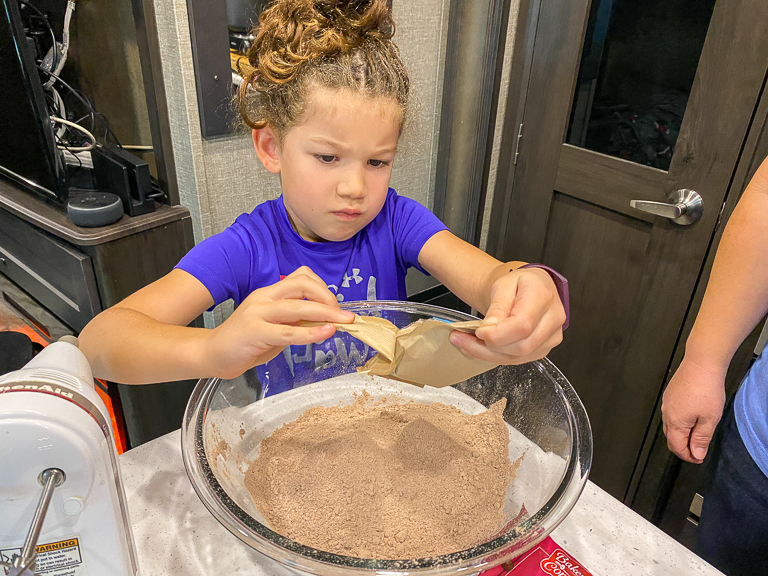 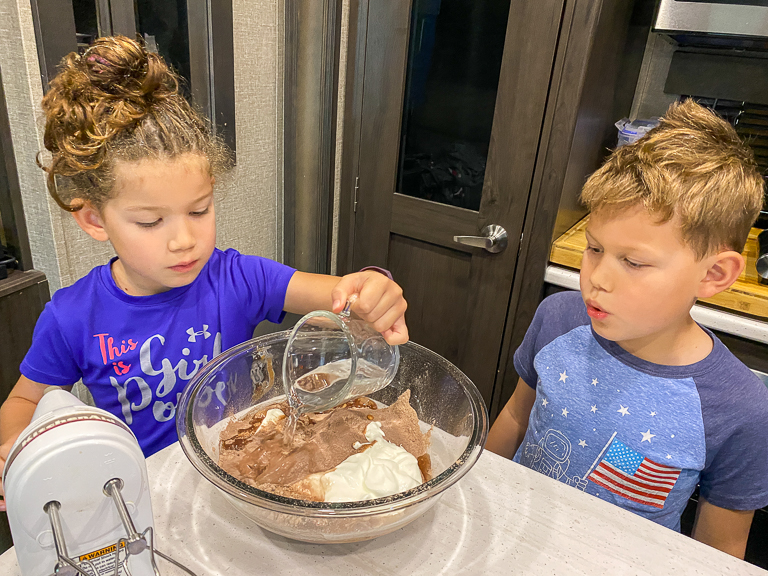 Ian did a great job cracking these eggs. All four, perfectly cracked and no extra bits of shell! 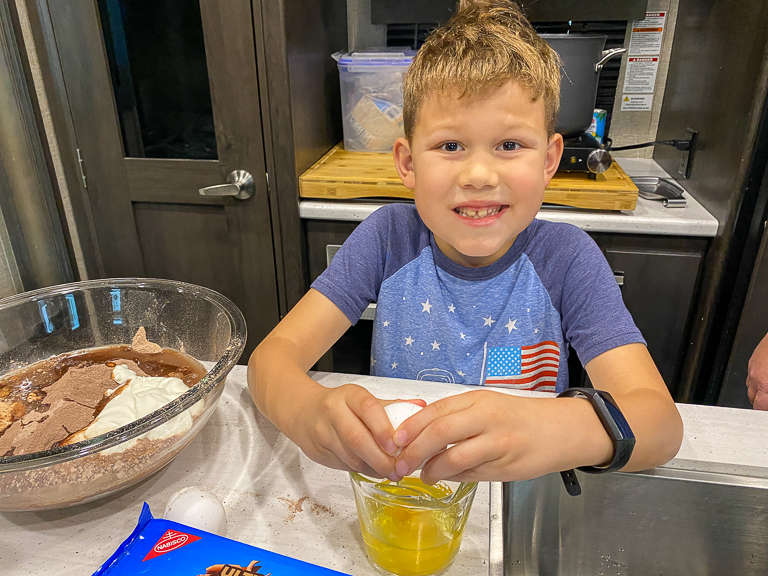 Theresa mixed it on medium-low for 90 seconds. No more than that. 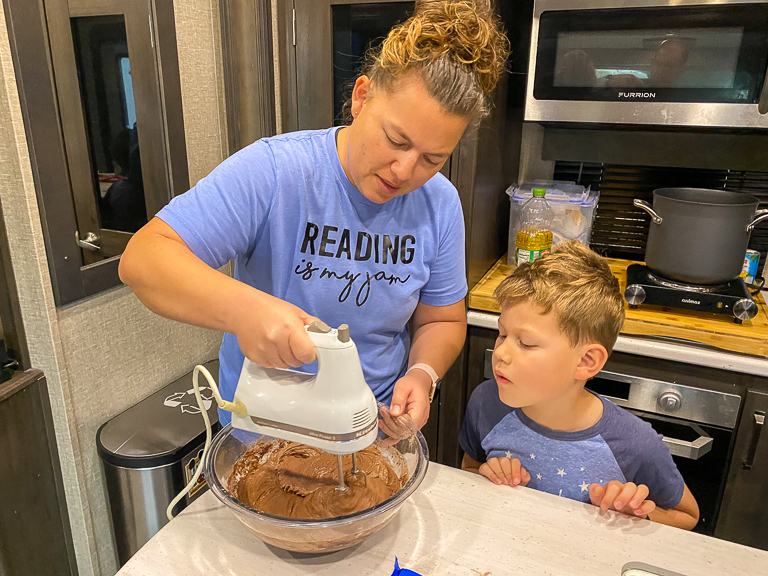 Ian poured them into the batter, then Theresa folded them in to mix everything up. 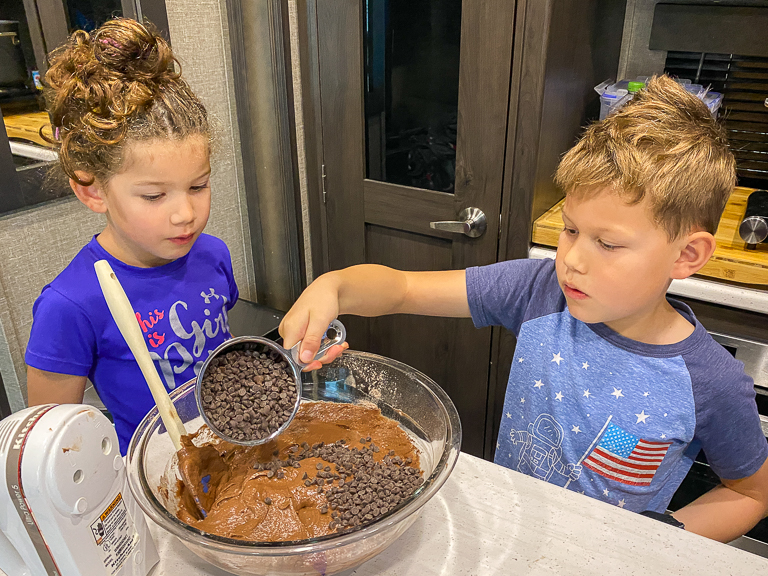 In the RV, we're limited in space, so I don't happen to have any round cake pans. We do keep a bundt pan with us, so today's chocolate cake is going to be made in that. Alli helped get every single surface coated with butter, then we floured it to make sure the cake won't stick when it comes out. 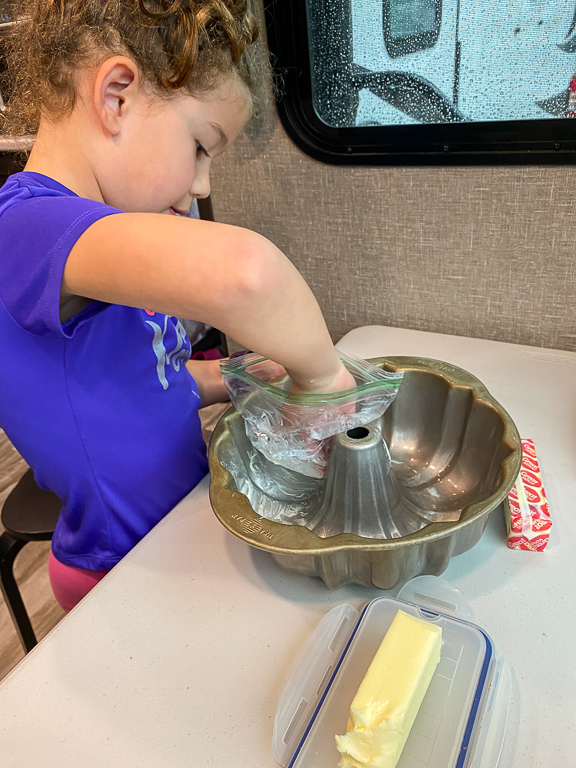 I held the bowl, while Theresa rotated the pan and tried to fill it up evenly. 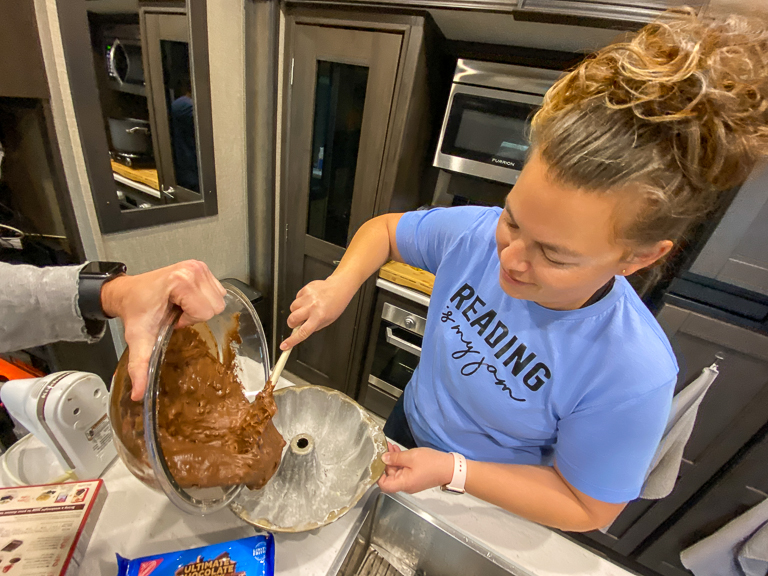 And since I'm the last one holding the bowl, I get dibs on the spatula. 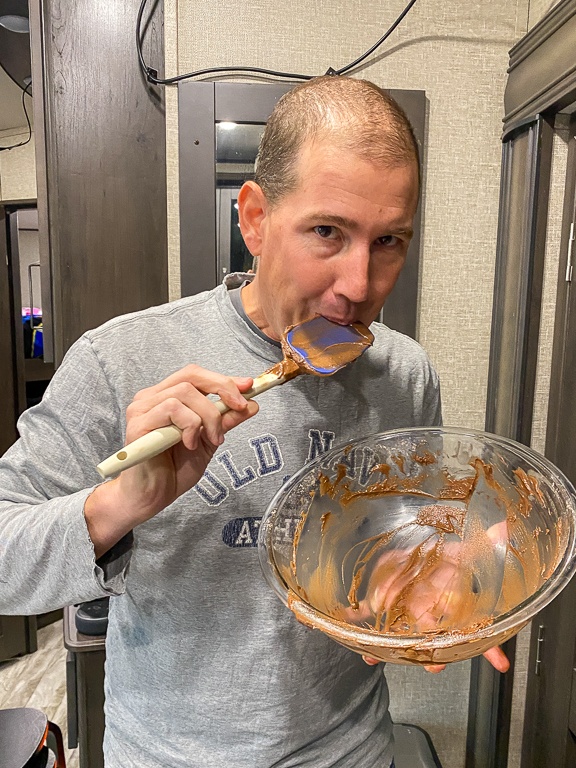 After 50 minutes at 350F in the toaster oven, it was ready to come out. After letting it cool for a few minutes, Theresa flipped it out of the bundt pan and onto a cooling rack. The temperatures outside are dipping into the 40s, so the cab of the truck will be perfect for cooling this down. 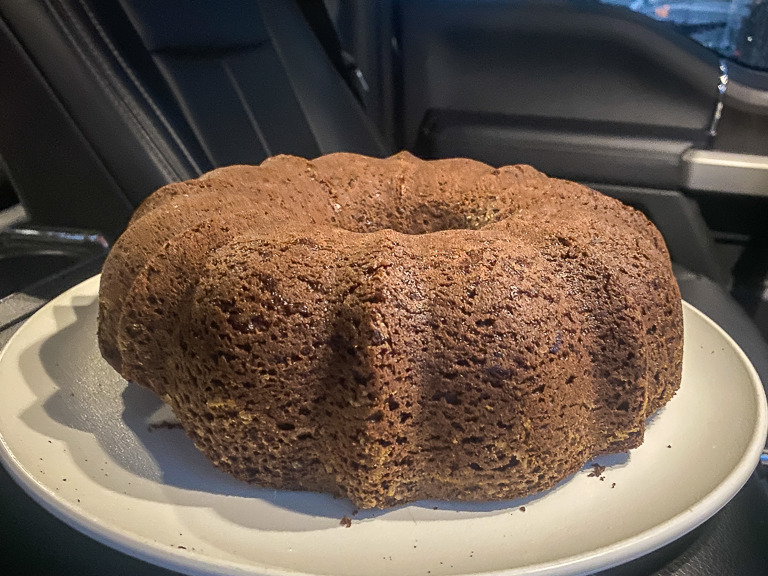 While that's chilling, I need to make my own frosting. Using cocoa powder, powdered sugar, butter, vanilla, and milk, I whipped everything together until it got smooth. 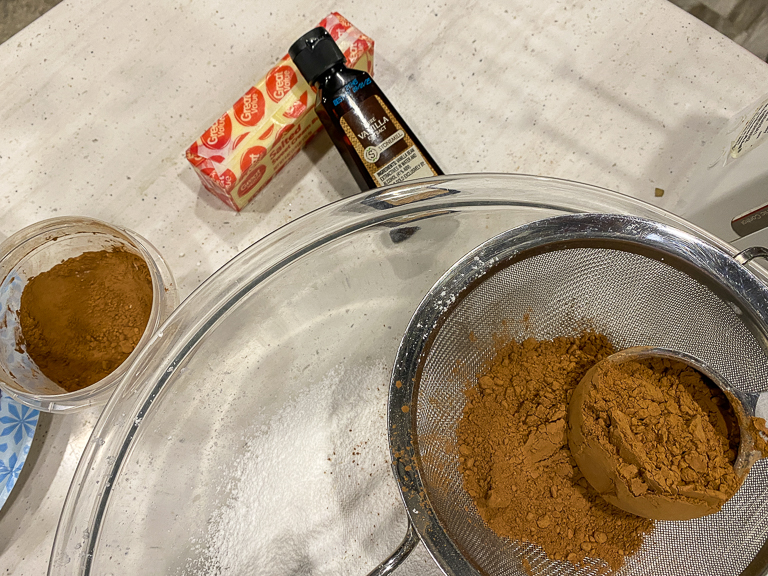 That's going to be good. 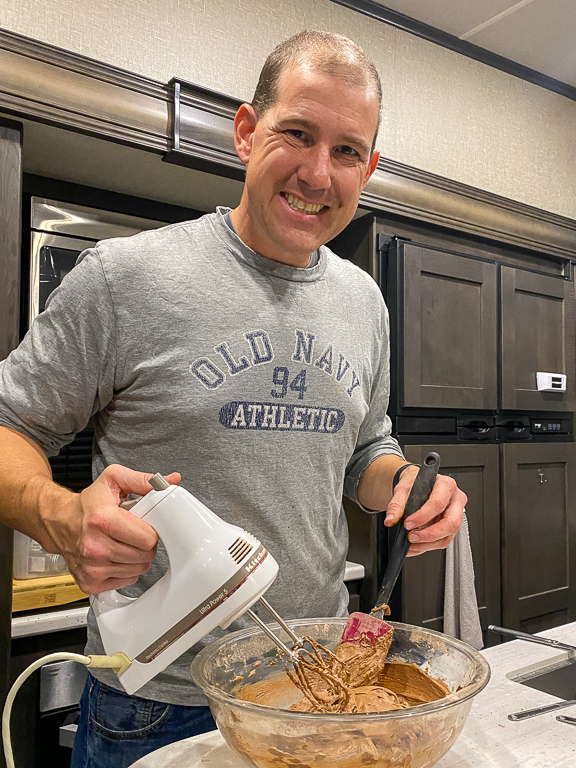 Ha! It didn't take long for these two to see what I was doing and want to lick the beaters when I was done. 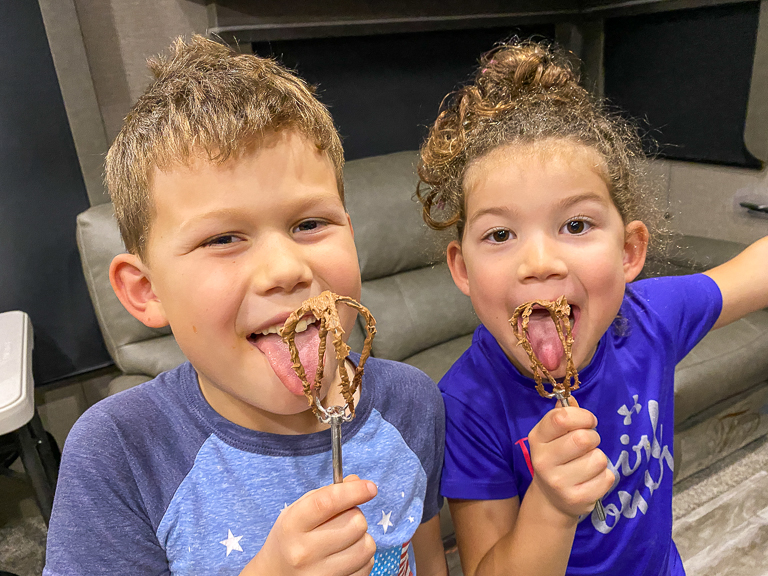 I know it's not typical to cut a bundt cake in half and frost the inside, but I'm trying to match the photo on the packaging a little bit at least. 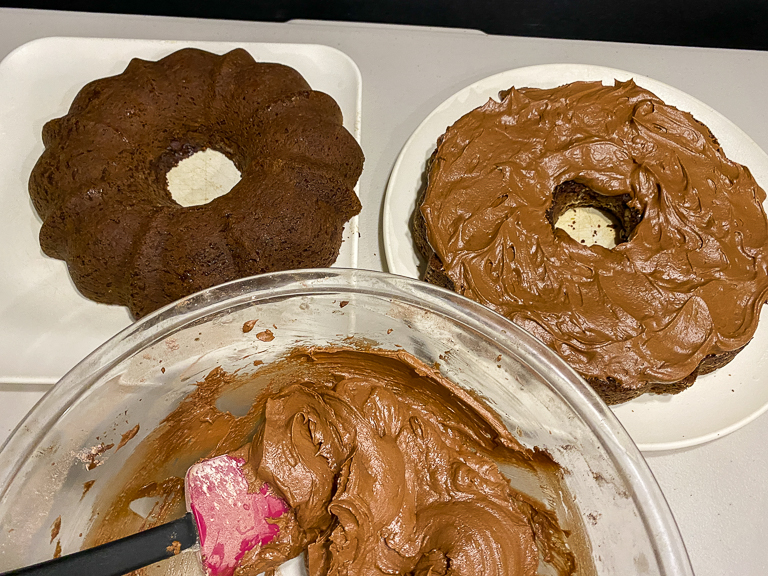 And then Theresa used her skills to help decorate the outside, like she would with a normal bundt cake. Alli said she likes the cream cheese frosting better, but that's not the theme of today. Today we're doing Ultimate Chocolate. 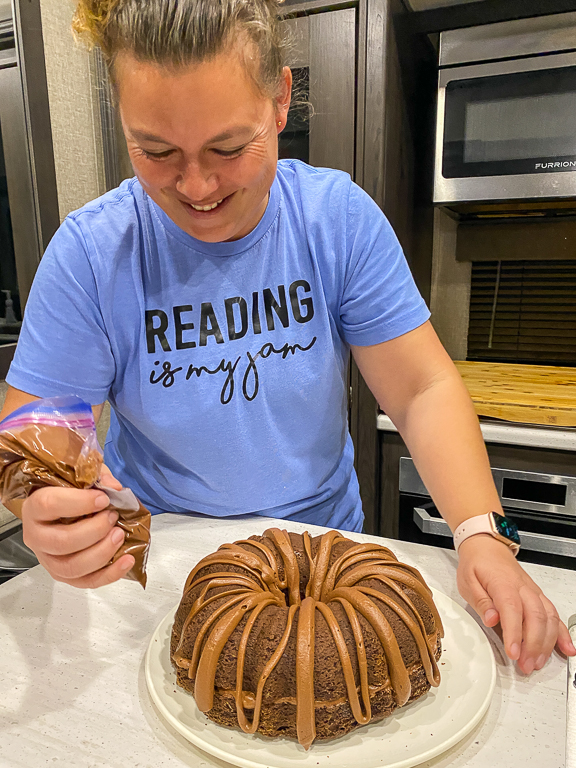 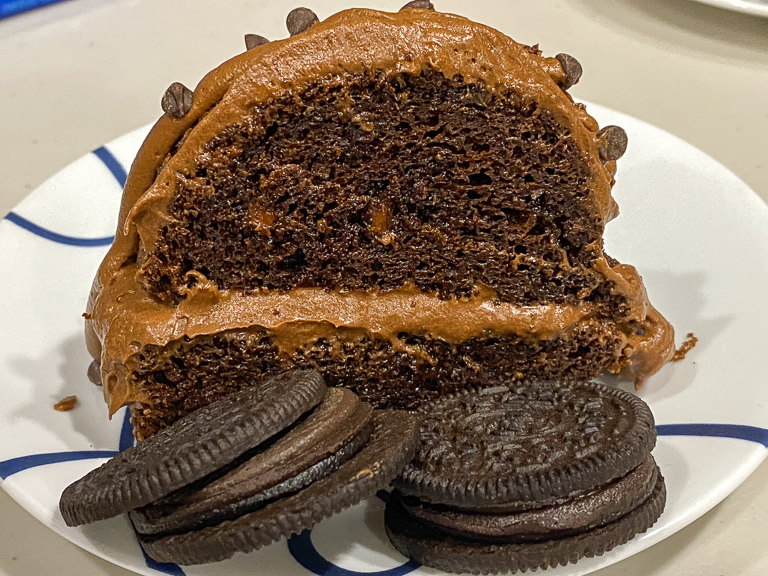 Let's take a closer look at those Oreo cookies. They look a bit dark. 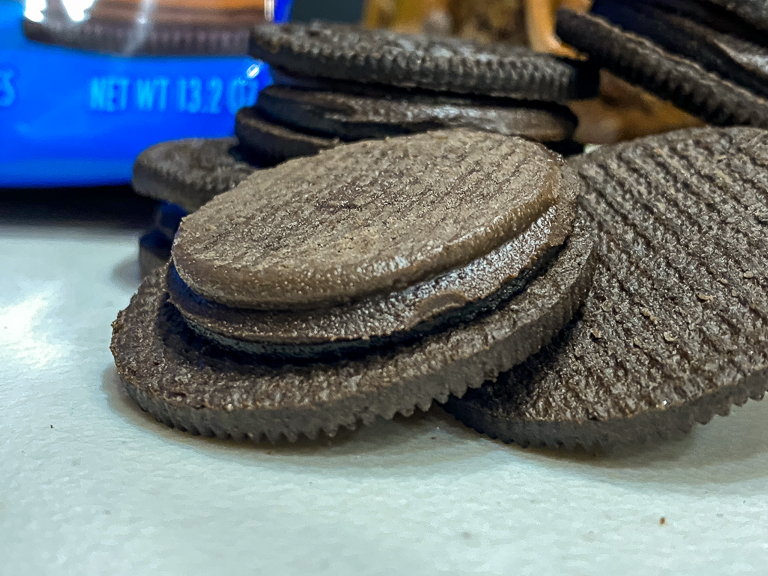 Are we sure the artist who designed the package actually got to see the cookie ahead of time? The colors look nothing alike. I guess there's three layers here on the cookie, but all three of them are a darker shade of brown than anything on the package. 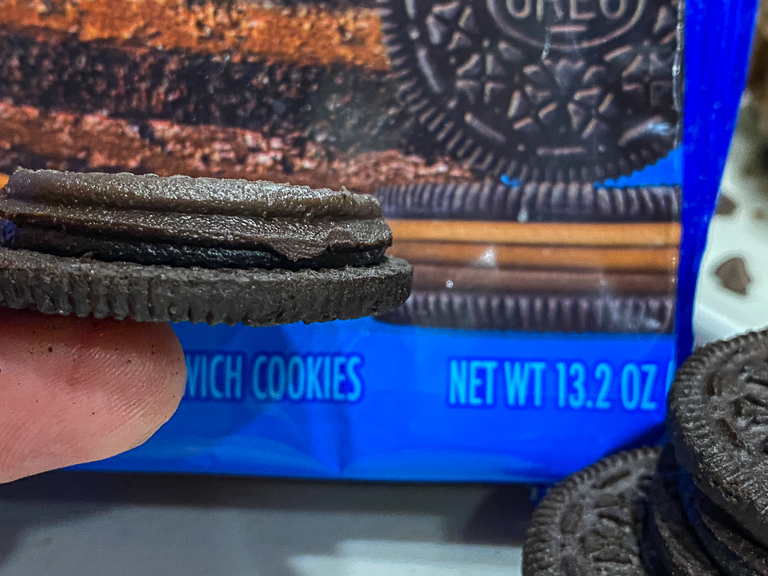 The cake? Oh, you know it's delicious. Very chocolately, but also sweet from the frosting. Everyone did a great job making the cake. 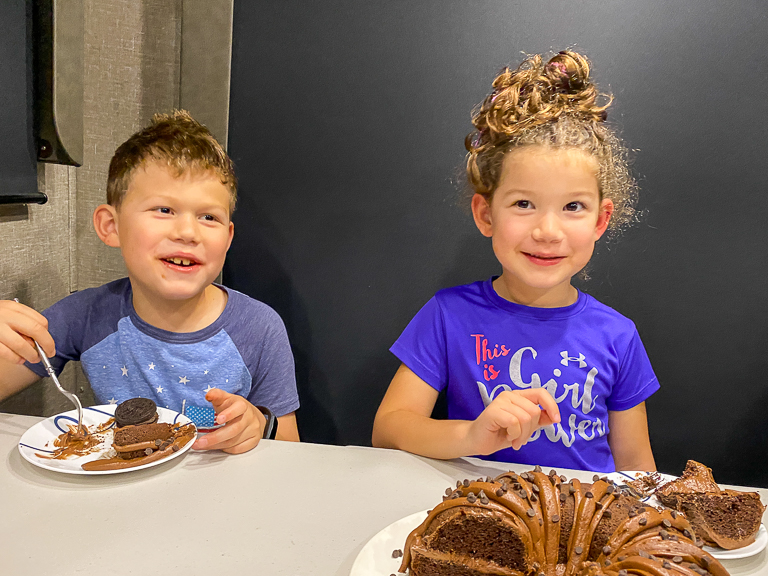 Theresa - Let's try the Oreo. They are almost always significantly inferior to their competitor.
Alli - What does inferior mean?
Theresa - What do you think it sounds like?
Alli - It always loses? 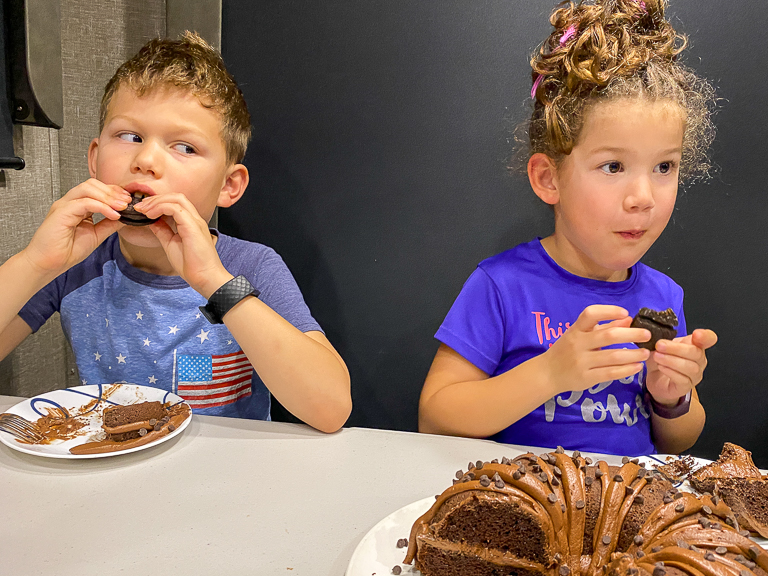 Theresa - It doesn't even look appealing. Our cake color matches the picture color really well. Theirs doesn't.
The middle tastes like a chocolate frosting. 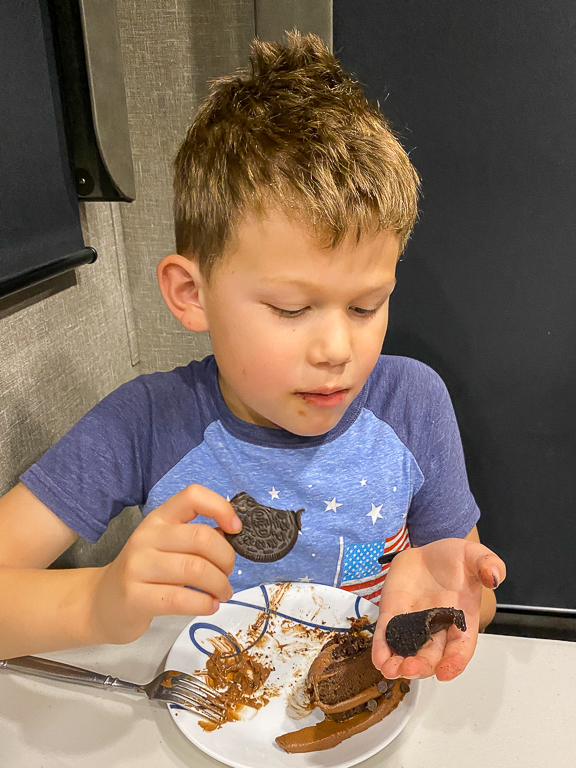 Theresa - It's okay. That's about as good of a review as I'll give to an Oreo that has a chocolate cookie on it. My favorite with the chocolate cookie is the Oreo Peppermint Bark.
Alli - It's just okay.
Theresa - But if it were a choice between no dessert and that, I'd pick no dessert.
Joe - Really?
Theresa - I don't really care for Oreo cookies, and you do a lot of taste tests with Oreo cookies.
Ian - The cake wins!
Theresa - The cake is better for sure. The cake is superior to the Oreos. 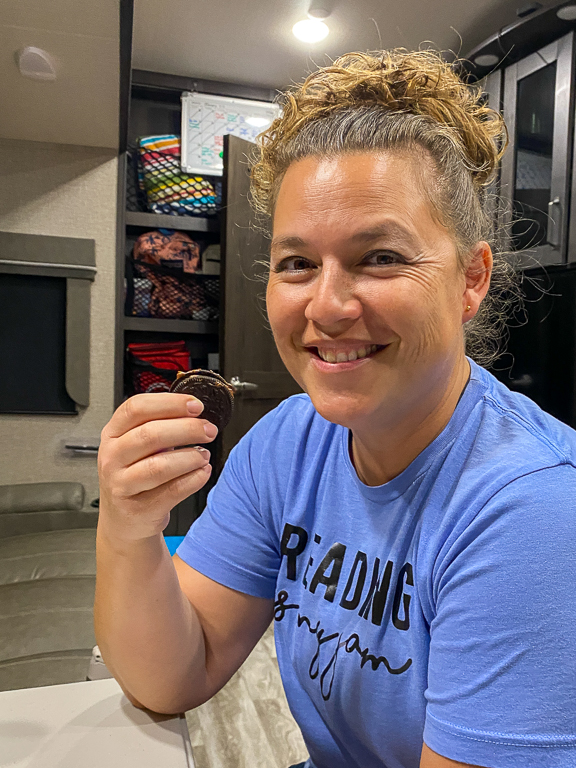 I sent a picture to my brother and sister-in-law since they like Oreo things too. Megan thought the cake looked delicious and sent this back. I guess she wants to participate in Chocolate Cake Day too!

You want one, you got it! One piece of chocolate cake coming up. 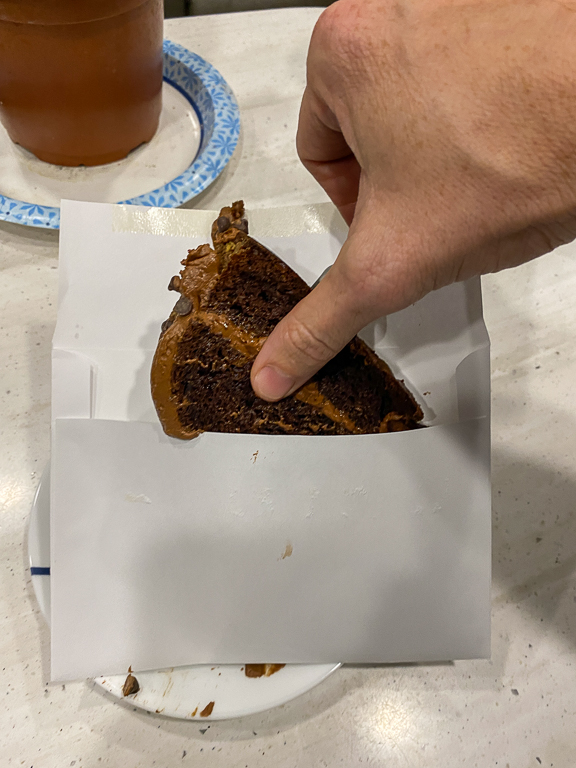 Stuffed in an envelope and sealed with frosting. 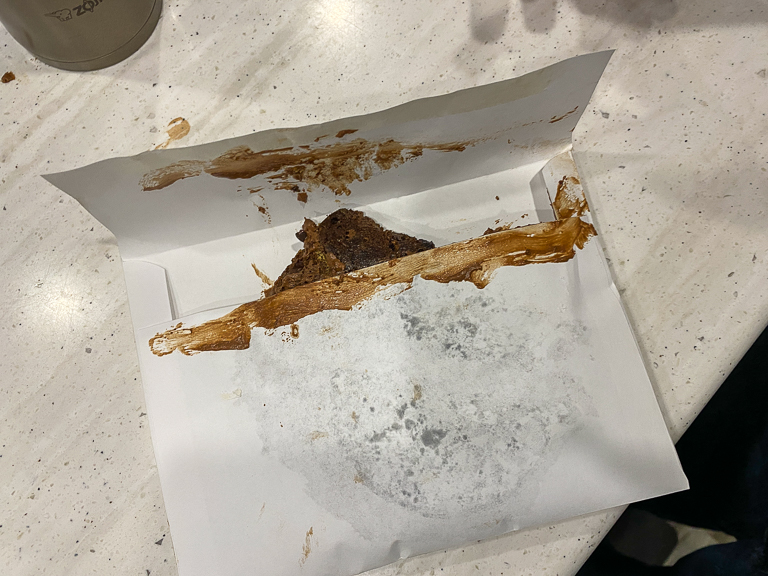 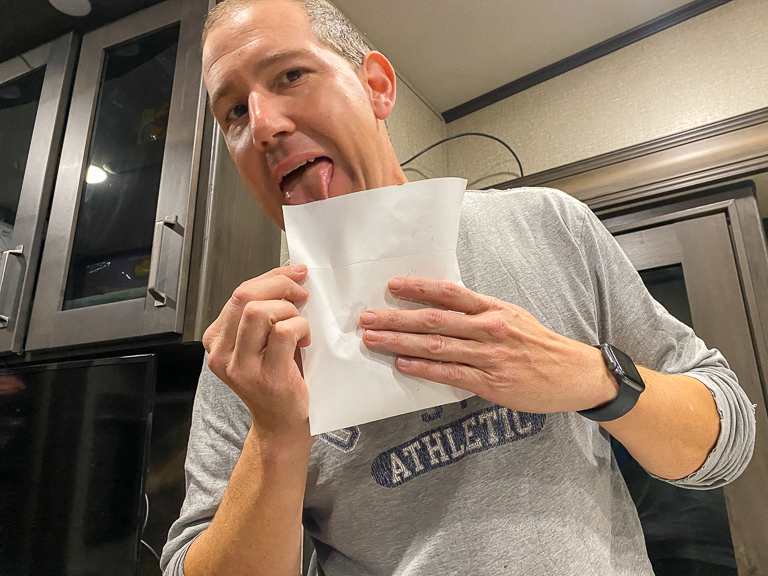