It's time for the latest round of fruity taste tests! I love it when we visit different farms and can get lots of different varieties of fruits. It's only when you taste them all together that you can really appreciate the differences between them and get the best idea of what you really like. We've tried dozens of different kinds of apples from New York, Colorado, and Napa, California Dates from Palm Springs, and Oranges from Florida.

We're in Fresno and on the Fresno Fruit Trail! One of the places we visited, Friesen Family Farms, had 7 different varieties of peaches and nectarines that were ripe and ready! Let's try them all! 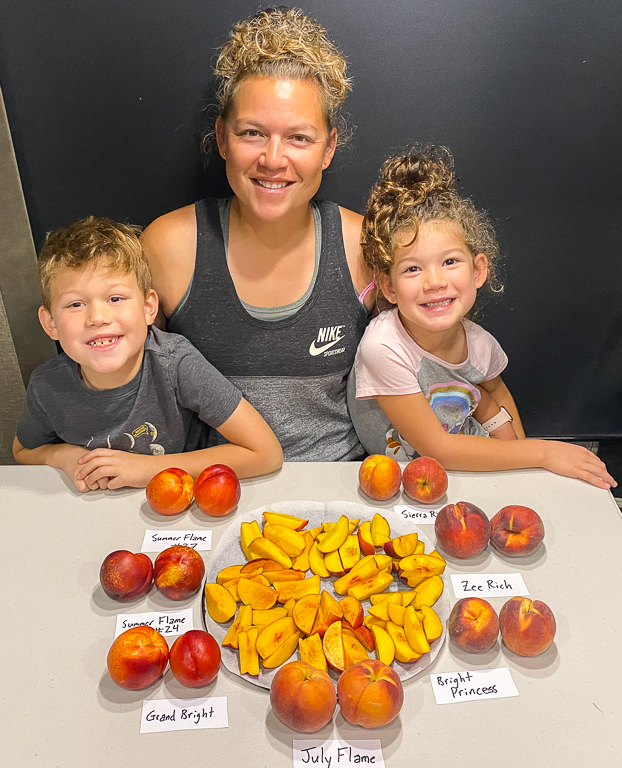 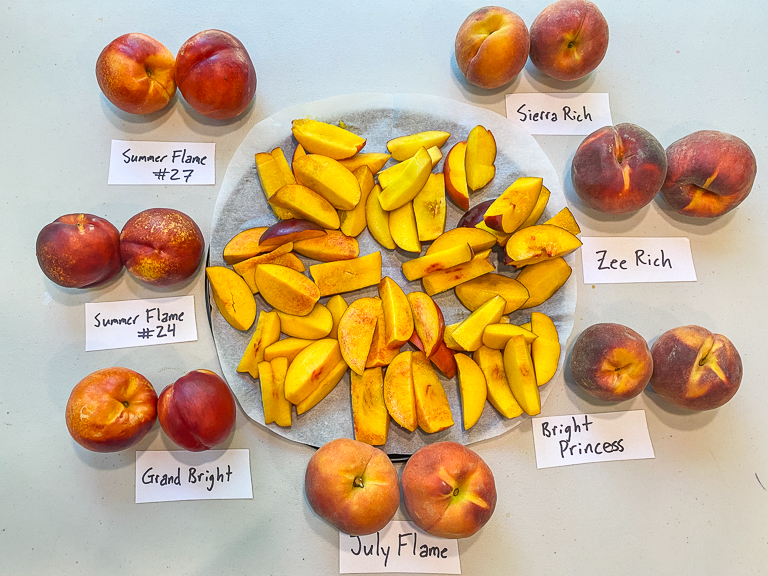 The girls at the Friesen Farm Fruit Stand were so nice. They let us sample everything we wanted, helped pick out the best fruits to fill the case we were buying, and even offered to carry it out to the truck for us! 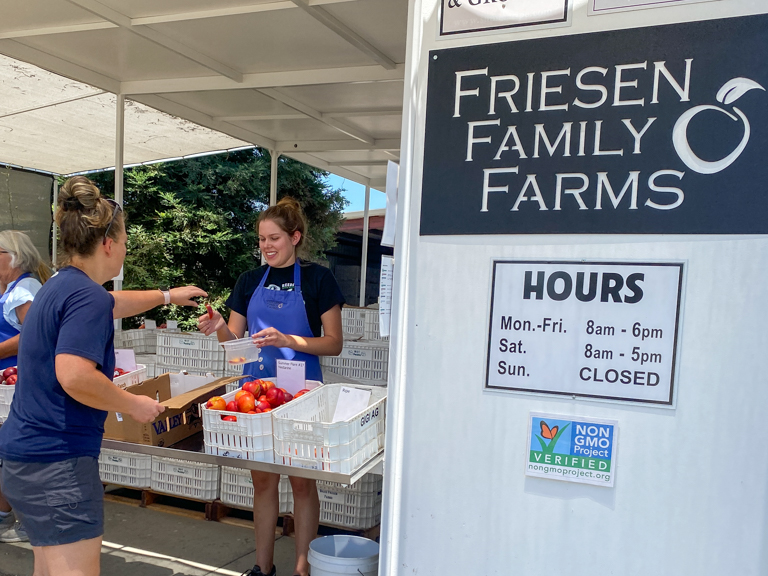 Theresa got everything washed and cut for our taste test. 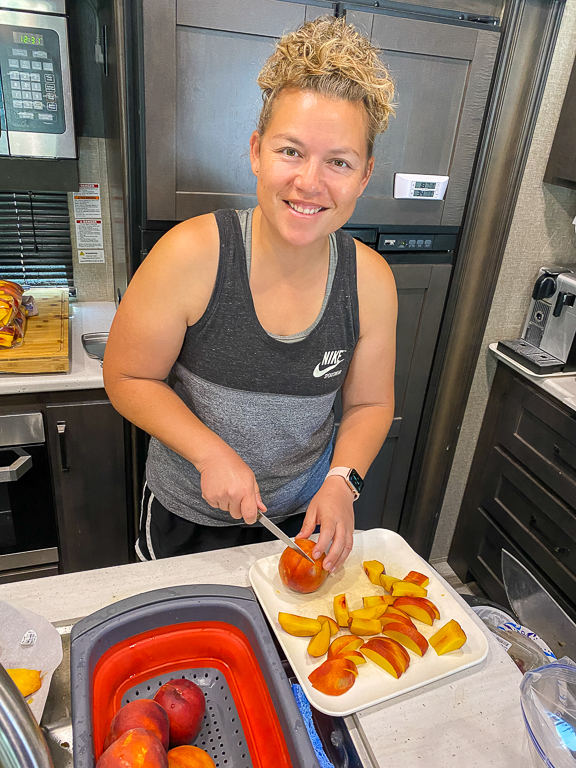 Another look at our fruits. There's lots more besides these. We ended up buying a 25 pound box of all these varieties from Friesen Farms! 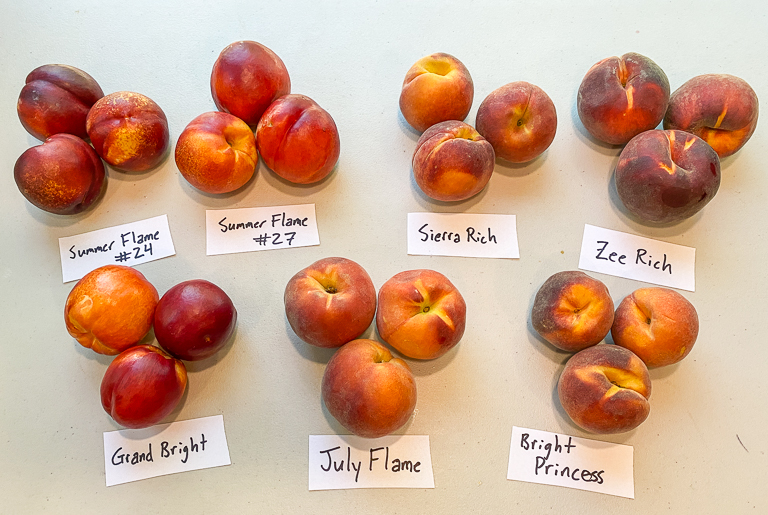 It's really unfortunate that when it's labeled for the grocery store, it just receives a generic name like "Yellow Peach" instead of the specific variety of the peaches. 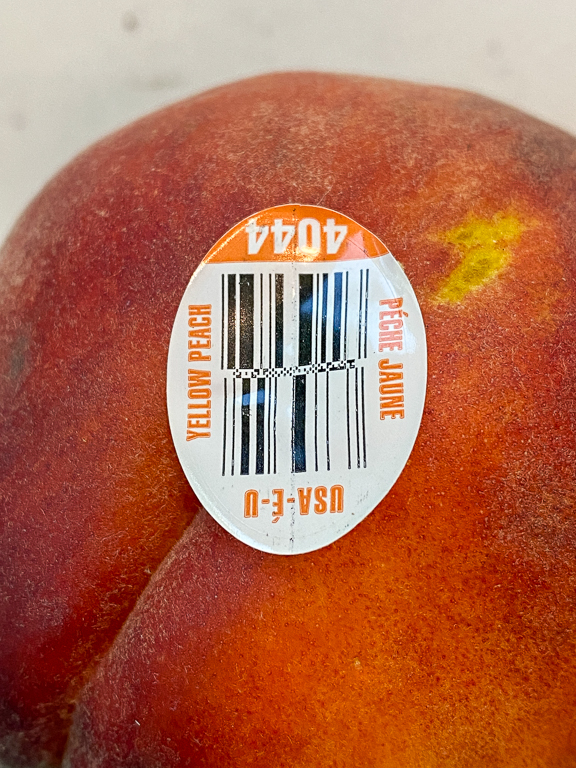 What's the difference between nectarines and peaches? Peaches are fuzzy! That's it for the most part. Both are stone fruits. Both have similar flavors, though nectarines have a texture that is more firm, while peaches are softer. 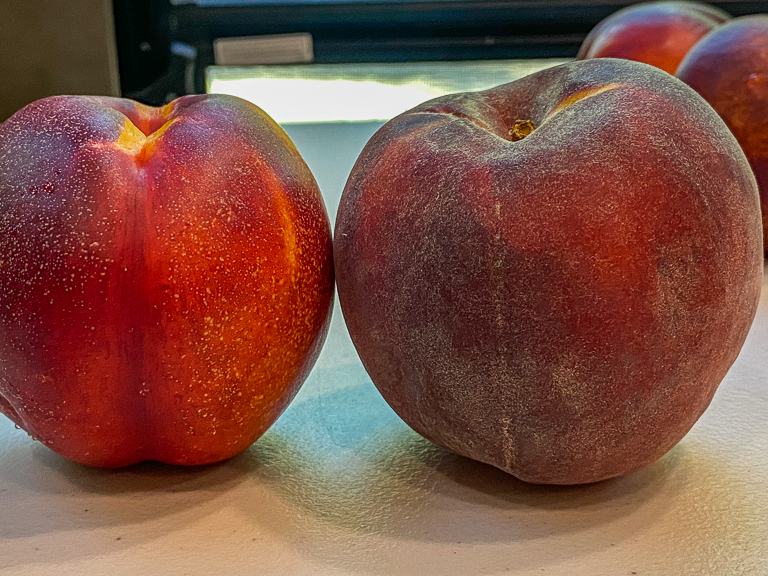 The pits from each. Yep, they're all pretty similar. 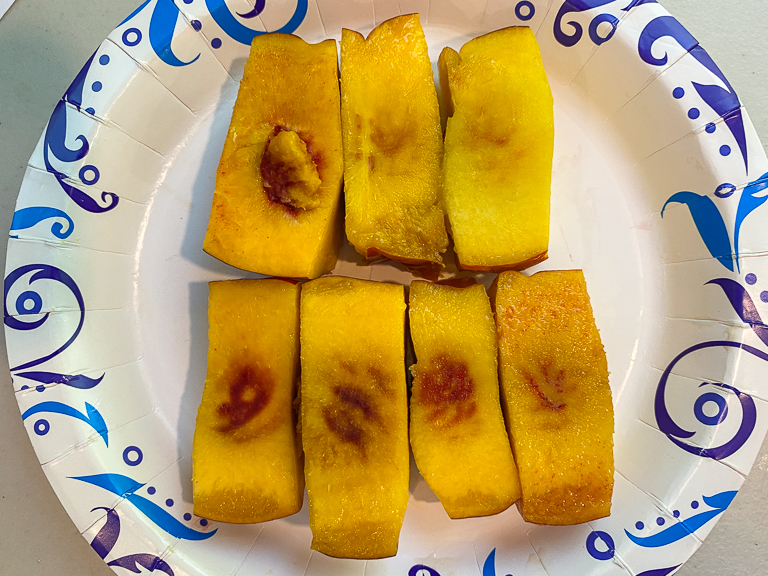 But do they taste similar? That's what we're here to find out. 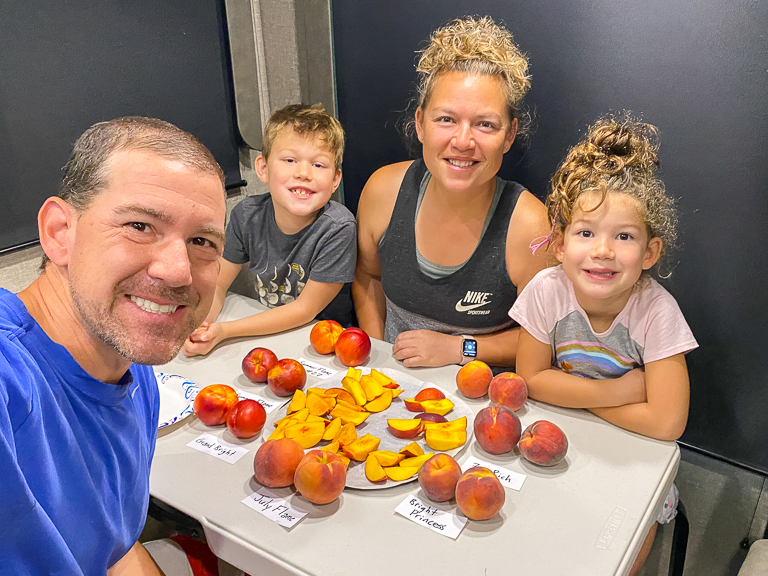 And will we have a favorite? 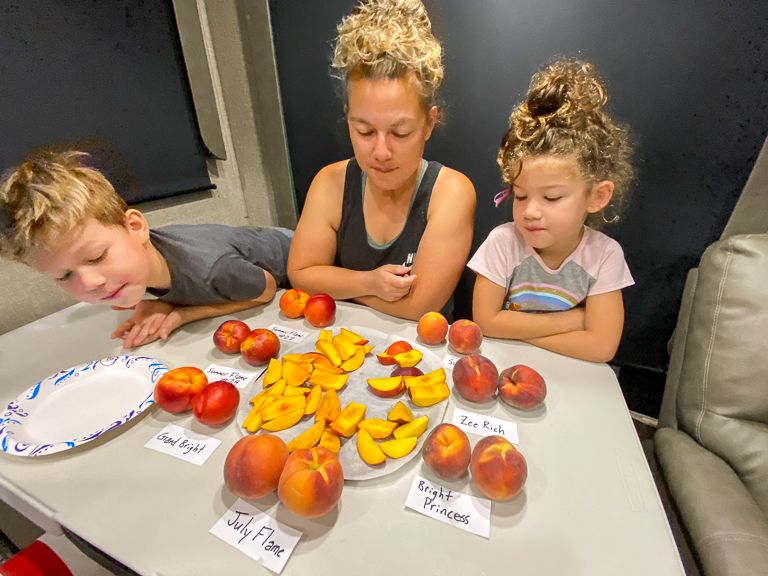 Which ones do you think are going to be better?
Ian - Nectarines? 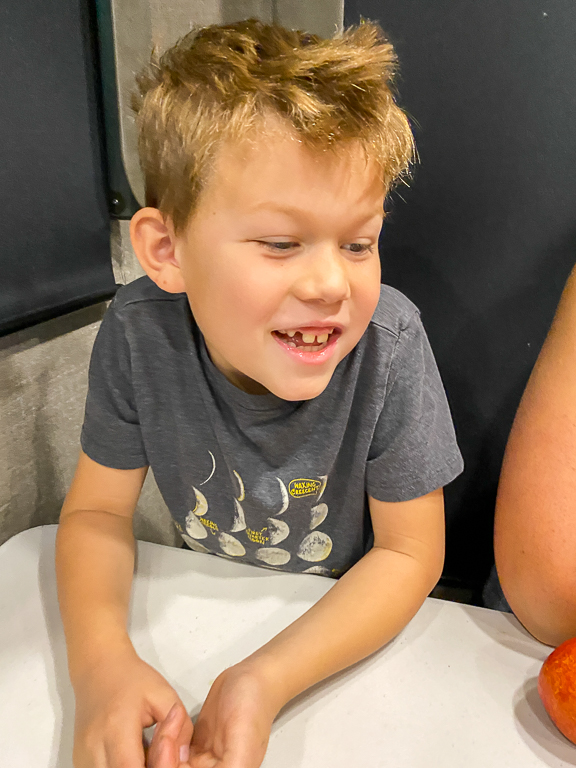 Why?
Ian - I don't like the fuzzy skin on the peaches.
Theresa - Who likes fuzzy in their mouth? I don't like fuzzy in my mouth.
So which should we try first?
Kids - Peaches! 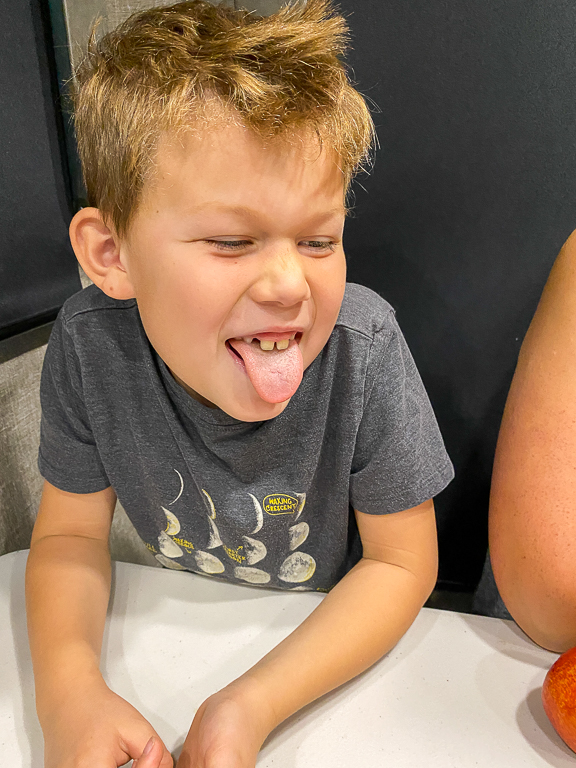 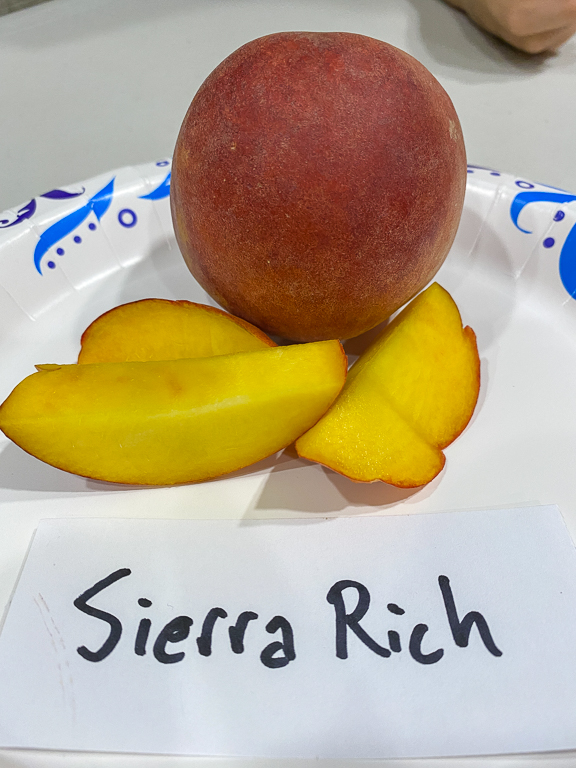 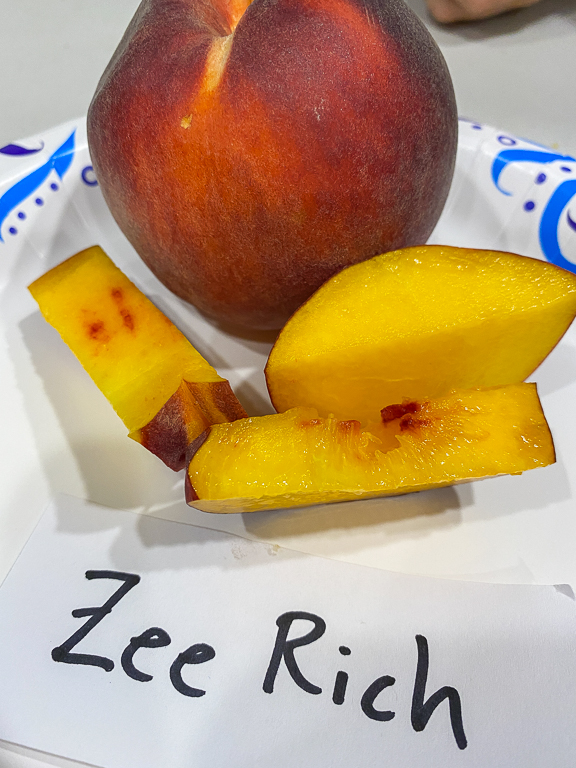 Bright Princess Peach
Ian - Third best one so far.
Theresa - That one has no peach flavor. I can't taste any.
Ian - I can't taste it either.
Joe - It's missing the flavor. It's got the texture and skin, but no flavor to it! 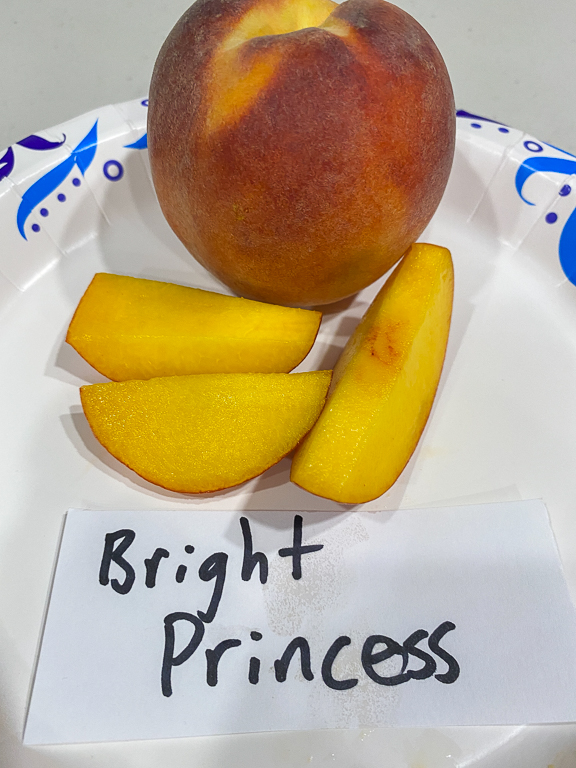 July Flame Peach
Theresa - Ooh, you can see the flame inside of it! It's a little sour.
Joe - The flame isn't giving you any flavor?
Ian - I have flavor.
Alli - Fourth place! 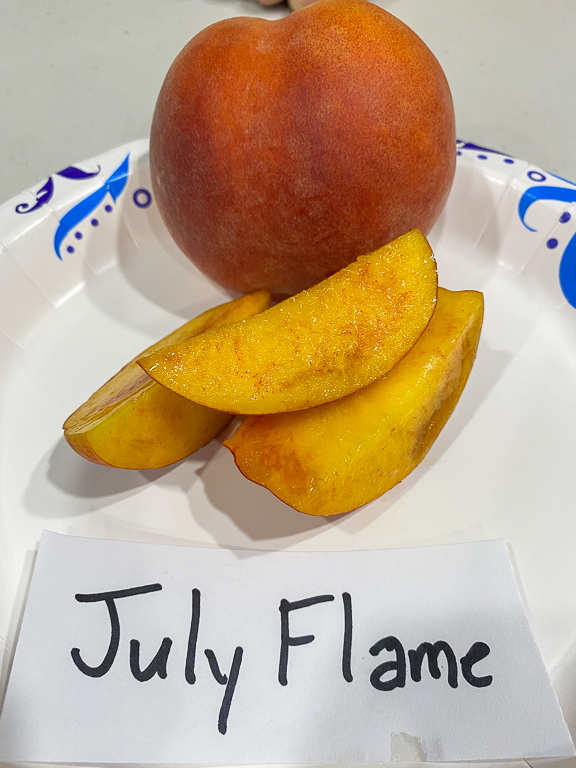 Grand Bright Nectarine
Ian - Let's try this thing.
Theresa - Much better skin. It has a mild flavor, but it has some flavor.
Alli - Good taste! 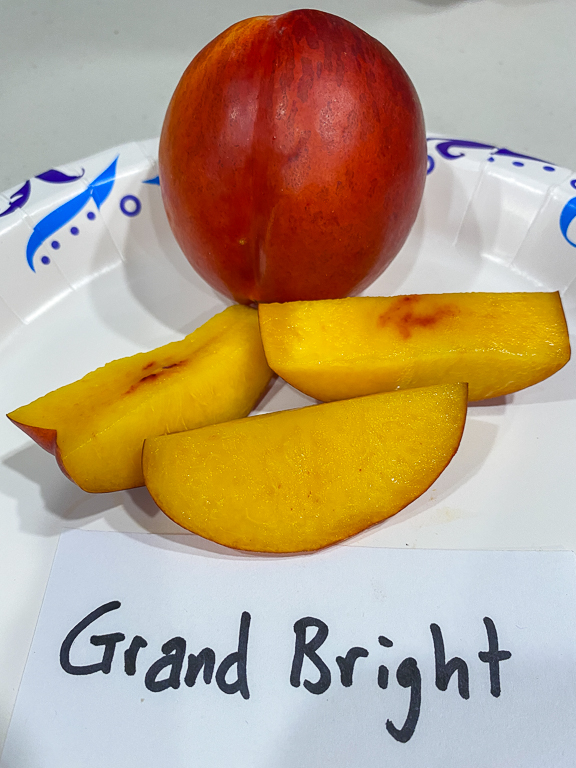 Summer Flame #24 Nectarine
Ian - Mmm.
Theresa - You said Mmm before you even tasted it! That one's a little tangy!
Ian - I tasted it!
Theresa - It's dry compared to the other ones.
Joe - Yeah, I can see that. 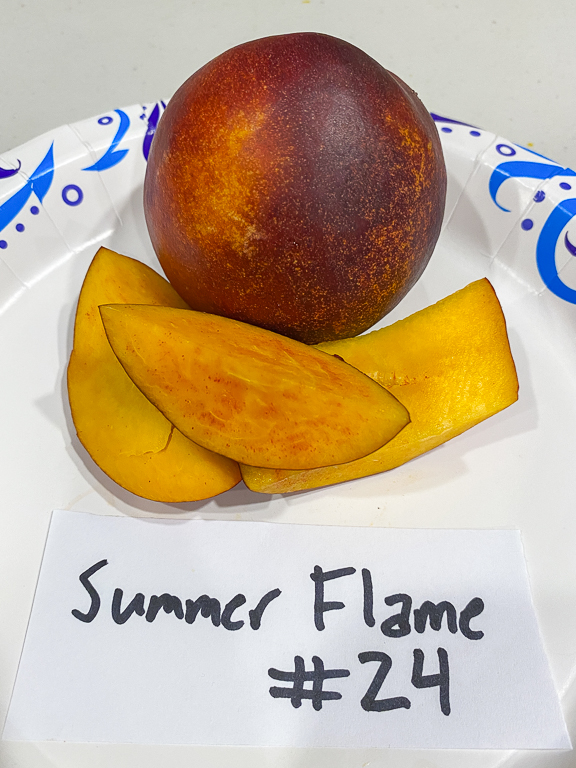 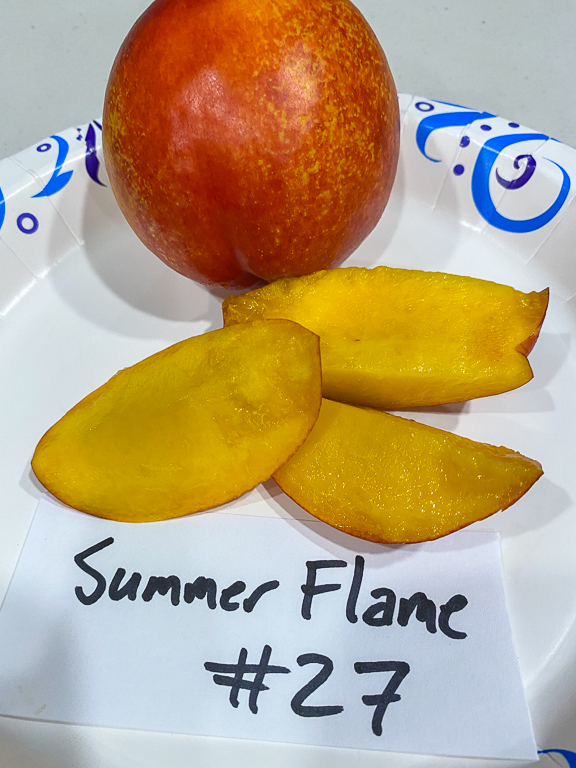 We've got to vote! There's 7 different fruits here. Which one is best?
Ian - Zee Rich is first. Summer Flame #24 is second. Summer Flame #27 is third (because it tastes a little like a plum, and I like plums).
Alli - My favorite is the Sierra Rich. Then Summer Flame #24 (cause it has good flavor and a tiny bit of crunch). Then Zee Rich (it's a tiny bit mushier but I still like it).
Joe - Zee Rich (because it has a lot more flavor).
Theresa - Zee Rich, followed by the Grand Bright. It's got a little bit of flavor and juiciness, and not softness.
Looks like the Zee Rich wins the day with 3 out of 4 first place votes! 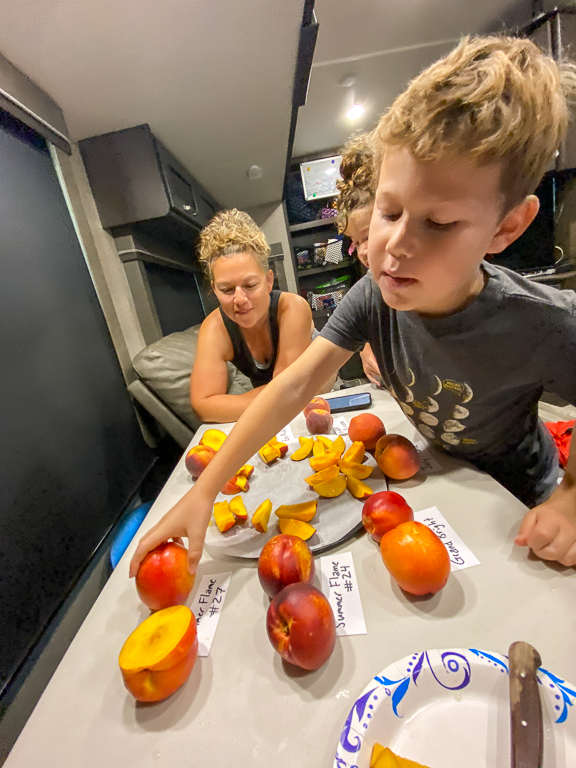 Peaches and Nectarines can be delicate! Textures are all over the place! There's a narrow window for when they're underripe or too ripe. Not like apples that can stay crunchy for a long time.
Plus they can get bruised easily and cause them to be mushy too. But it was good to get them right from the farm!
Thank you Friesen Farms!
Theresa - Time for me to eat a whole plate of peaches!
And for those we couldn't eat within the next couple days, I sliced and froze them. They'll be amazing in smoothies when the weather gets hot! 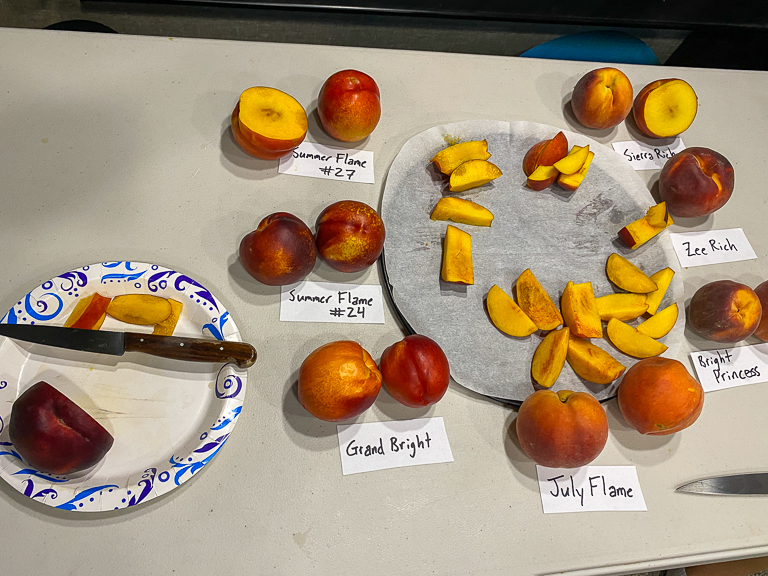