Yesterday we got a whole lot of apples from the Saunderskill Farms Apple Orchard. Having a whole lot of anything around here means that we're going to have a taste test with them! Let's figure out which ones we like the best! 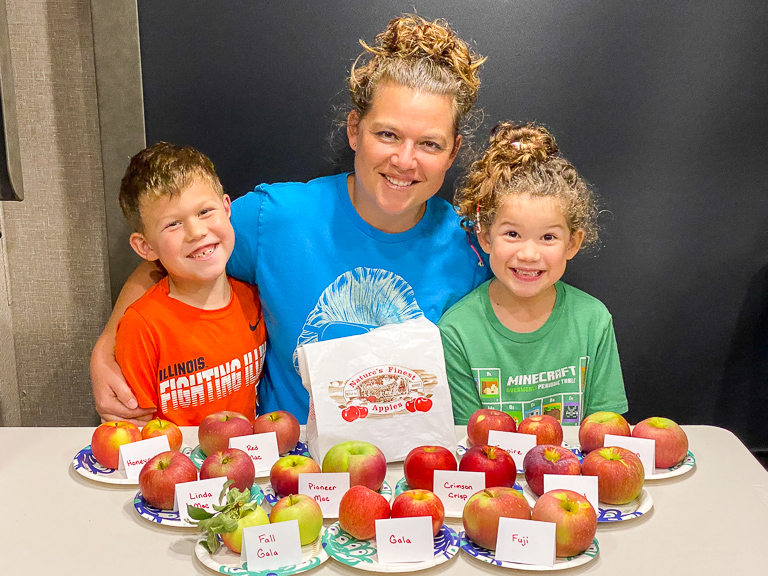 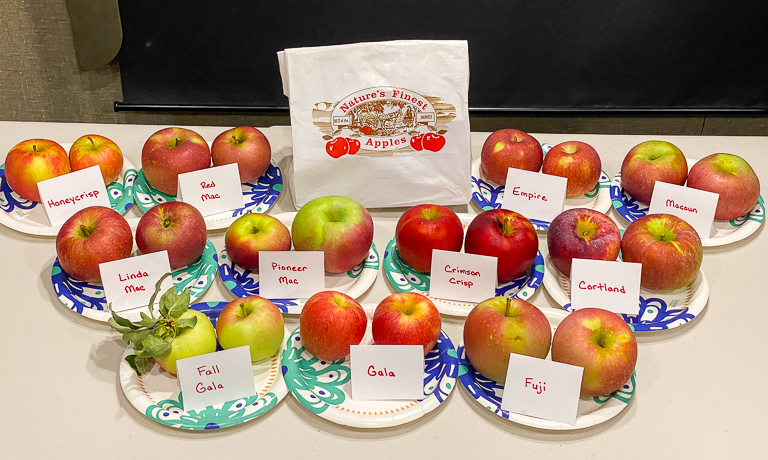 We've had some fun apple taste tests with family before. Theresa was missing Jess's artistic skill in designing the labels for the apples. 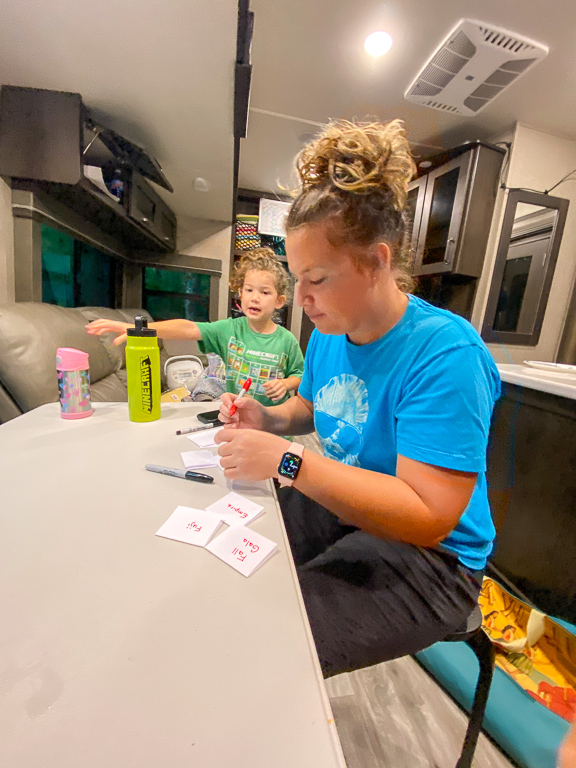 We've got a bag full of apples and a few soggy napkins that we'll have to decipher Theresa's shorthand code. 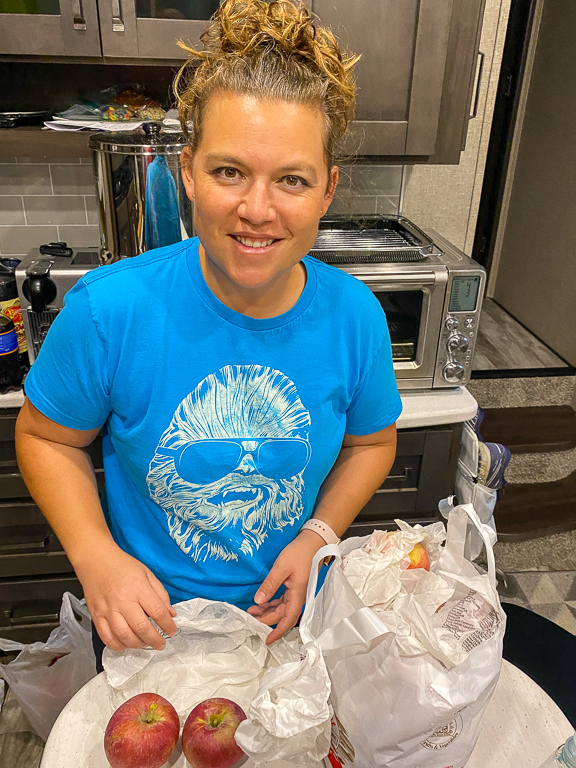 We were pretty careful about how we packed the bag, keeping things together, so after consulting the photos regarding the order of when we picked the apples and when they went into the bag, I think we got it all figured out. 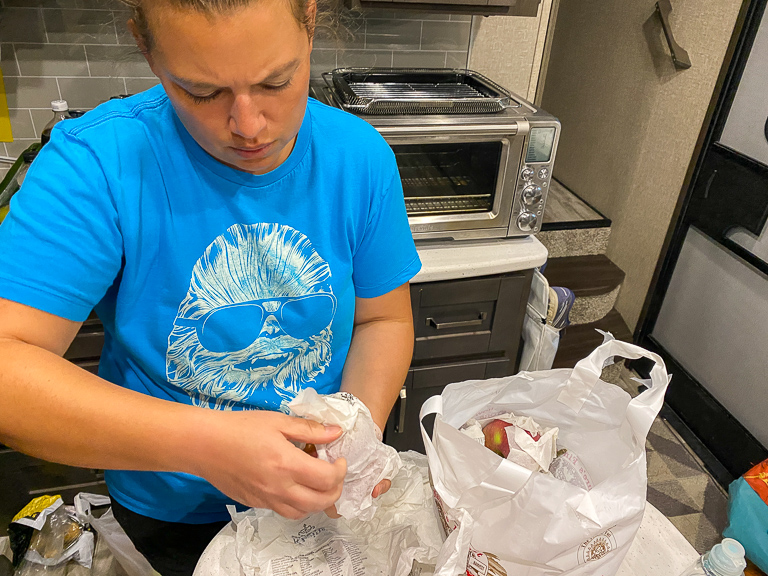 Will Honeycrisp retain its title of being the best overall apple? It's come out ahead in all our previous apple taste tests.
Developed by the Minnesota Research Center, and the third most popular cultivar in the US, generating $12M in patent royalties back to the Minnesota Research Center. It's crisp with a sweet but tart taste. A dessert and pie apple, but turns soft after too long in cold storage.

The Red McIntosh is a good eating apple and is widely used in Cider and Juice making. 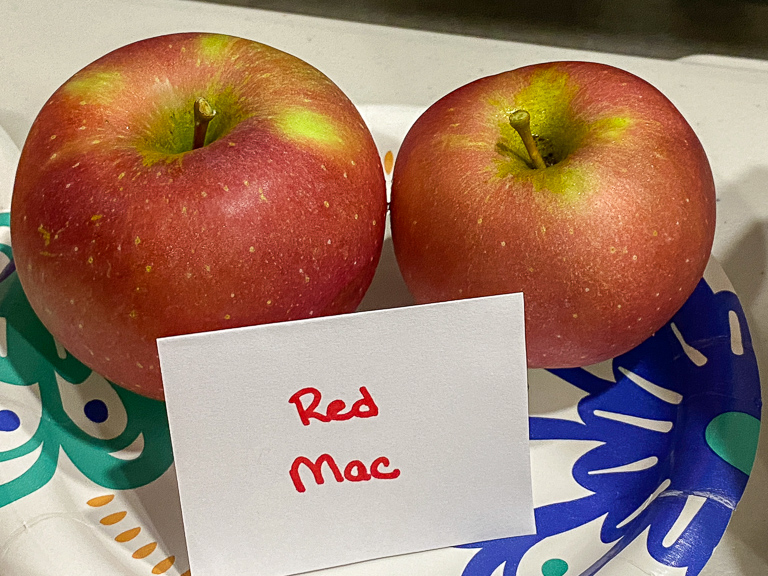 The Linda Mac is a whole tree mutation of the Red McIntosh discovered first in Michigan. A dessert apple. 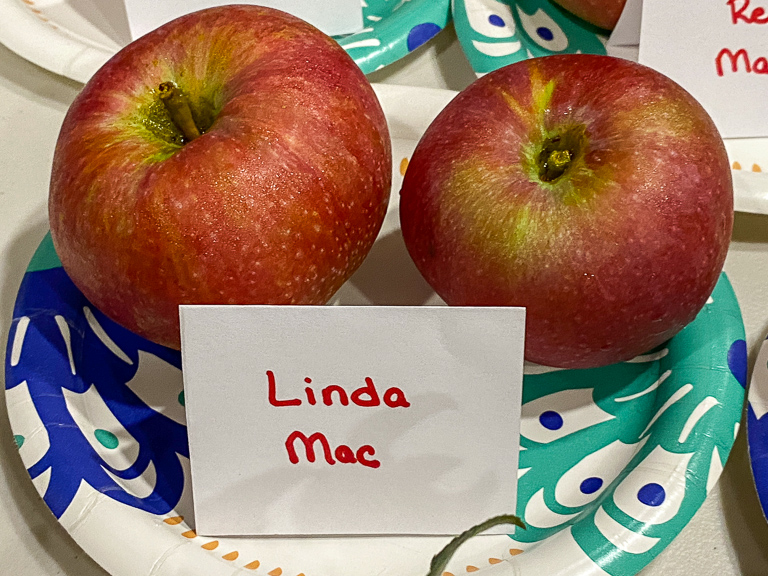 The Pioneer Mac was originally found growing at a fruit farm in New York. It's firm, crisp, and very sweet, but browns quickly when cut. 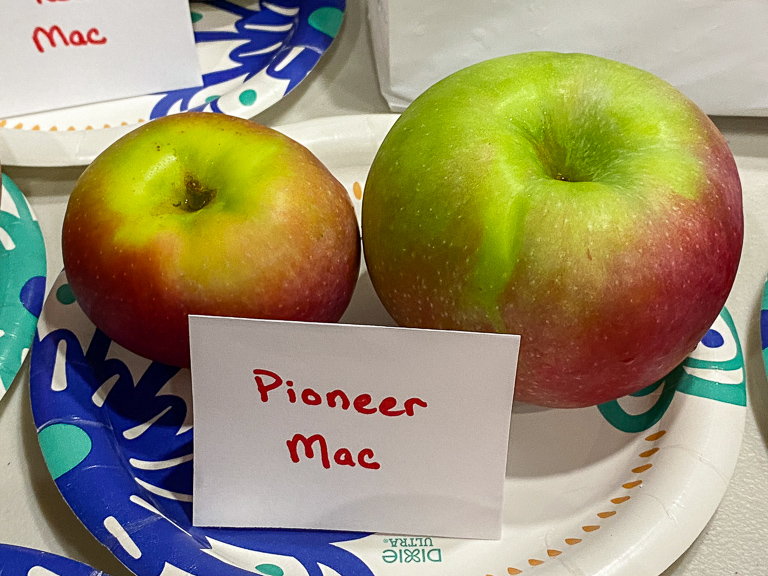 The Macoun was developed in 1923 by crossing a McIntosh with a Jersey Black. Makes a good apple sauce. 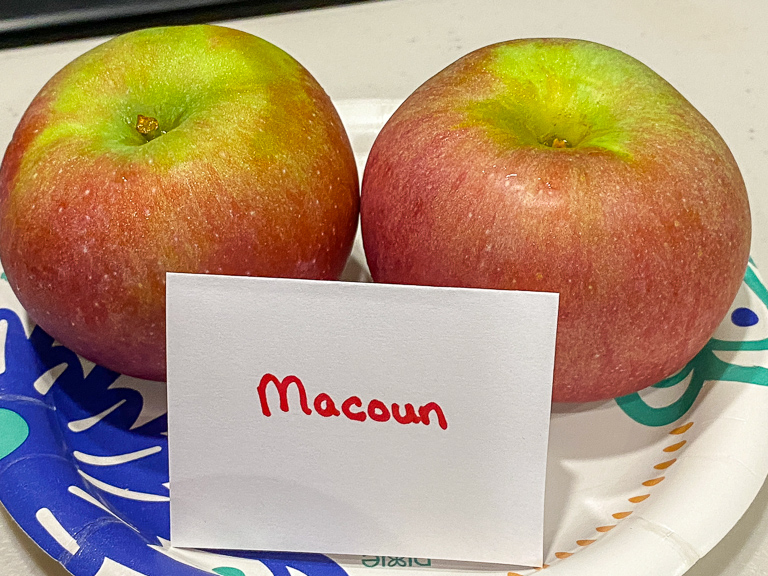 The Gala is the result of an experimental crossing of dessert apples back in the 1930s by Hutton Kidd. A cross pollination of the Golden Delicious and the Kidd's Orange-Red. Originally the Kidd's D-8, it was renamed the Gala in 1962. It has been highly susceptible to growing mutations, producing over 200 different kinds and that number is still growing. 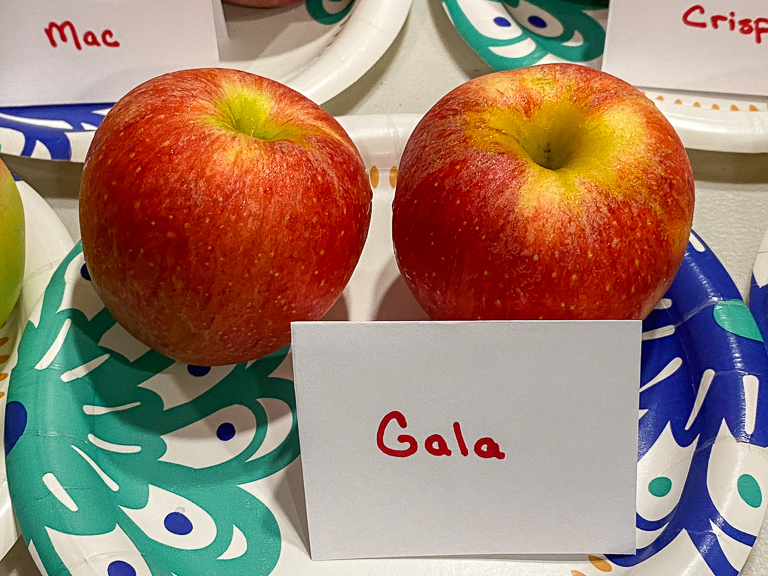 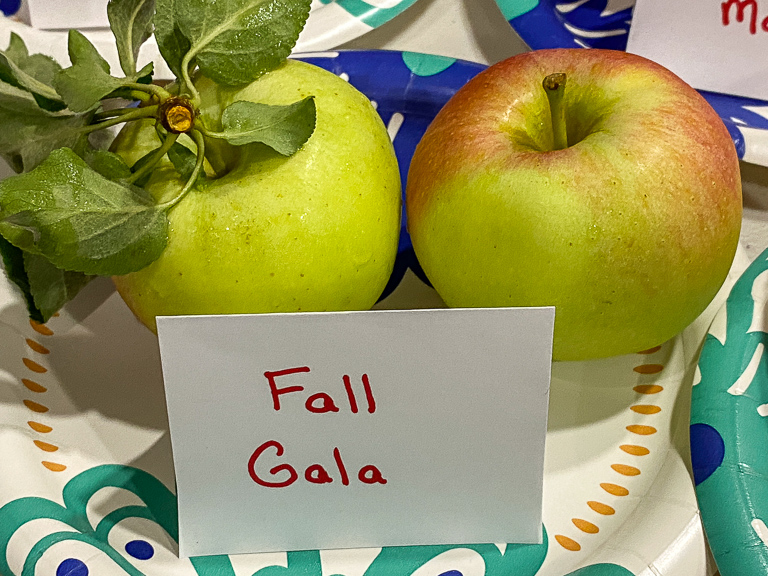 The Crimson Crisp was developed in 1971 between Purdue, Rutgers, and Illinois State Universities. Very crisp and juicy. 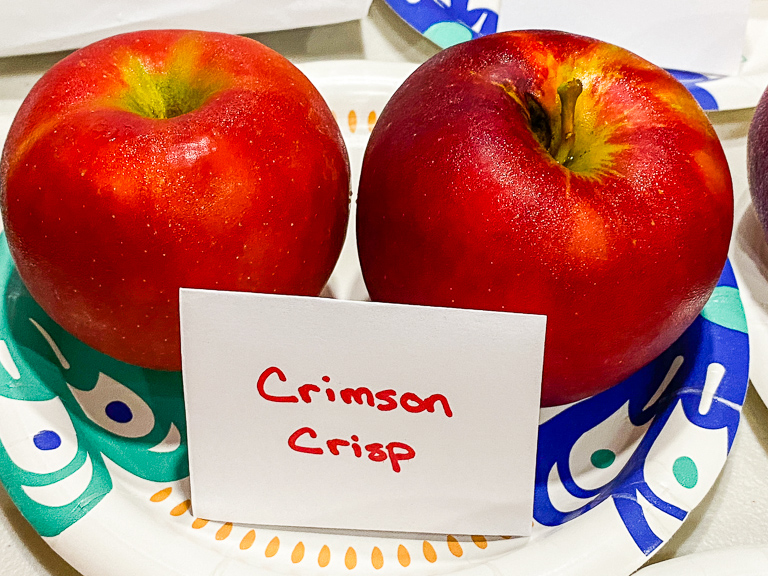 The Fuji was developed in Northern Japan at the Tohoku Research Station in 1939. It is named after the town of Fujisaki, where the research station was location, not Mount Fuji. China produced 20 million tons of apples each year, and 16 million of those apples are Fuji apples. 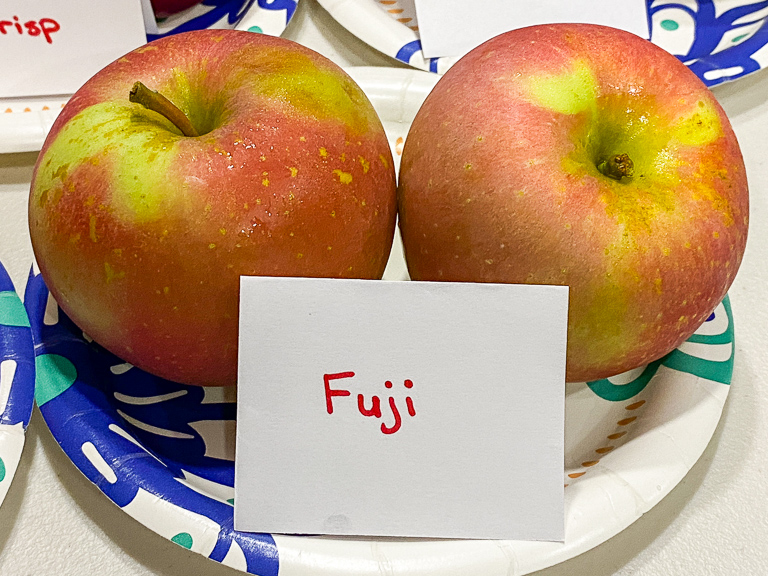 The Cortland apple was developed by Cornell in 1898. It's a good dessert apple and is used to make cider. 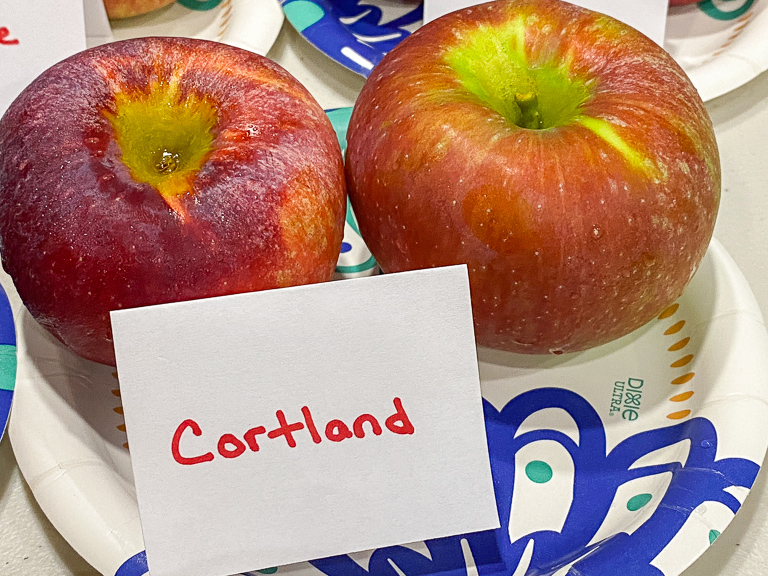 Called the Empire Apple because it was developed in New York State. It's a fresh eating apple, but falls apart when cooked. 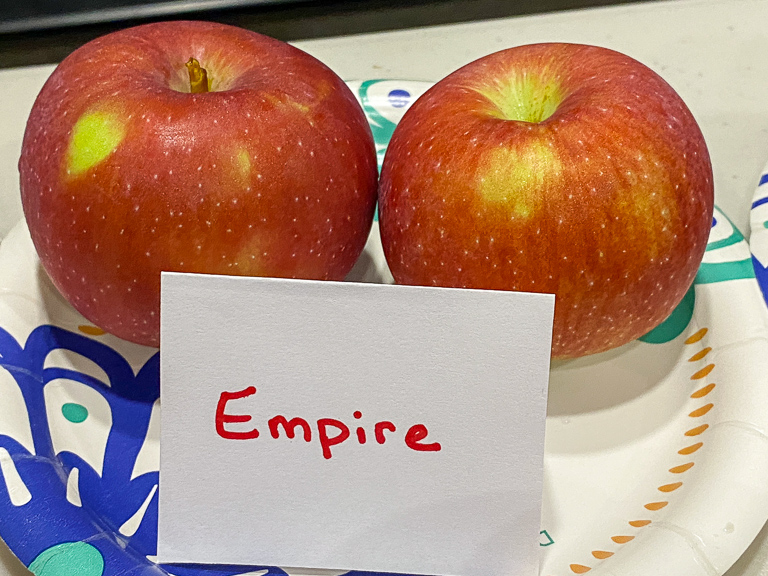 I knew there were a lot of different varieties of apples, but had no idea someone had set up a website to try to catalog them all. Pomiferous.com was helpful in my research of the origins and characteristics of each of these apples. They have over 7000 apples on their website!
Alright, that's enough pictures of them. Let's start eating them and deciding which ones are our favorites! 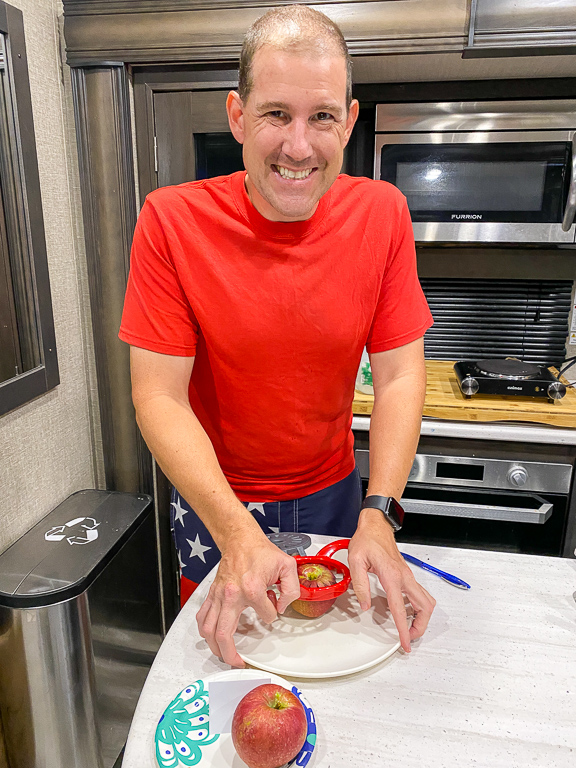 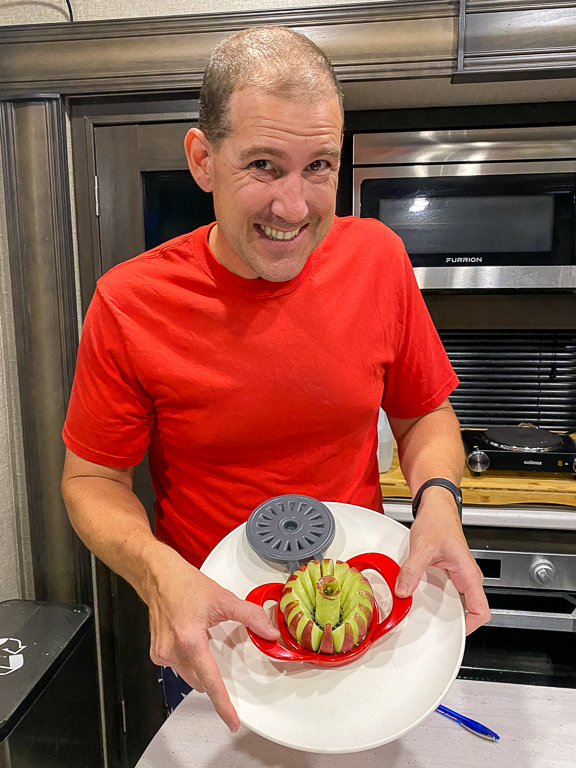 Originally the kids wanted to do a blind taste test, but they started peeking at the labels while I was cutting them, plus they could see the skins of the apples and had an idea for which ones some of them were. 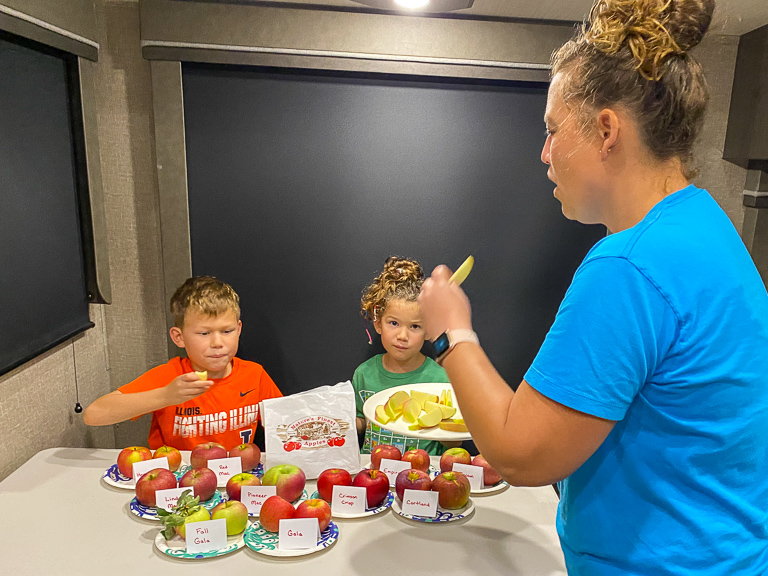 We sorted them by rows of which ones we really liked, which ones were just okay, and which apples we didn't like. Some of these might not quite be in season yet, so these are our opinions as of today. If we'd had picked them in a few weeks, the results might be different!
Apples that we didn't particularly care for today were the Empire, Fall Gala, Red Mac, Linda Mac, and Pioneer Mac. The Pioneer Mac and the Empire especially! Theresa said "Yuckamundoo" whatever that means.
In the Good category were the Gala, Macoun, and Cortland.
Our favorites of these 11 apples today were the Crimson Crisp, Honeycrisp, and Fuji apples. 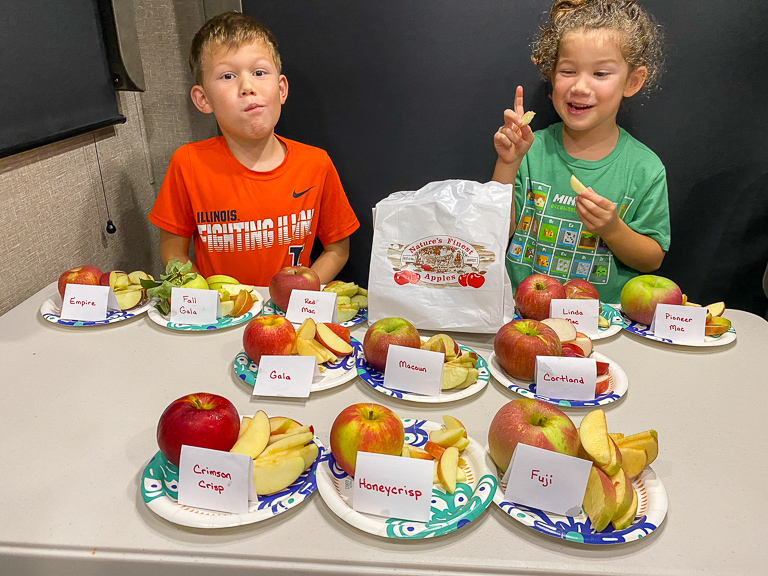 But the overall winner from the front row? The Honeycrisp! Yum! We do like this apple!
Alli - The wink means "this is the best you know!" 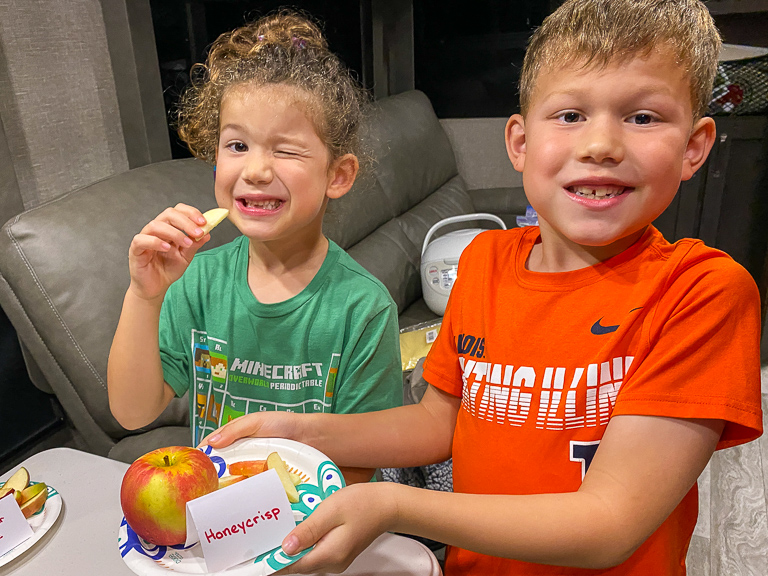 So with all these apples left over, I wonder what we should do with them? 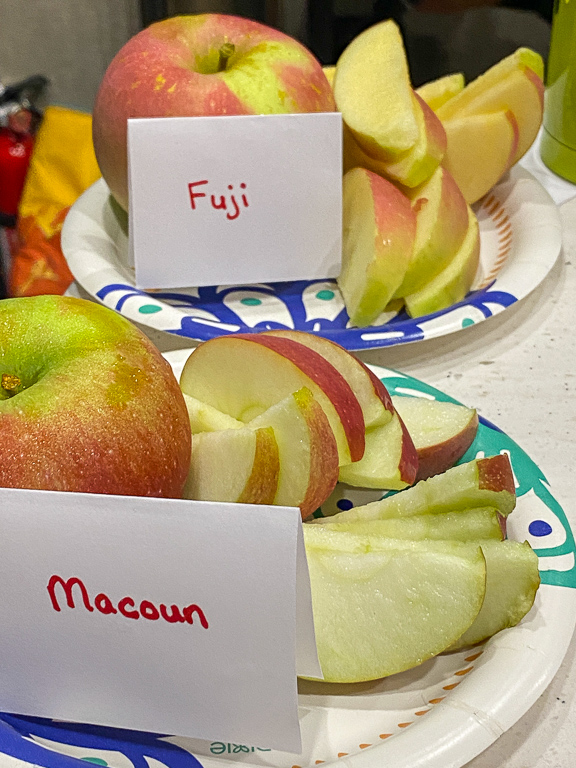 Theresa's got an idea! An apple cake! 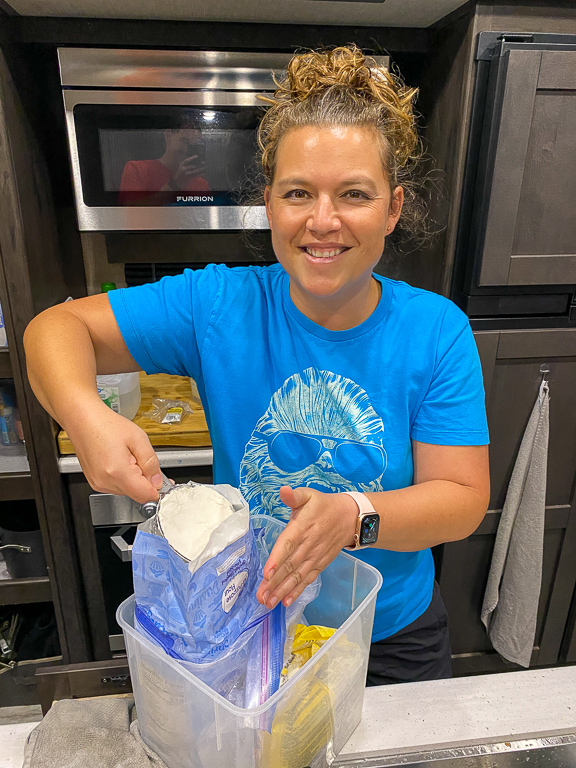 I got to work peeling the skins off each of those 1/16th apple slices. 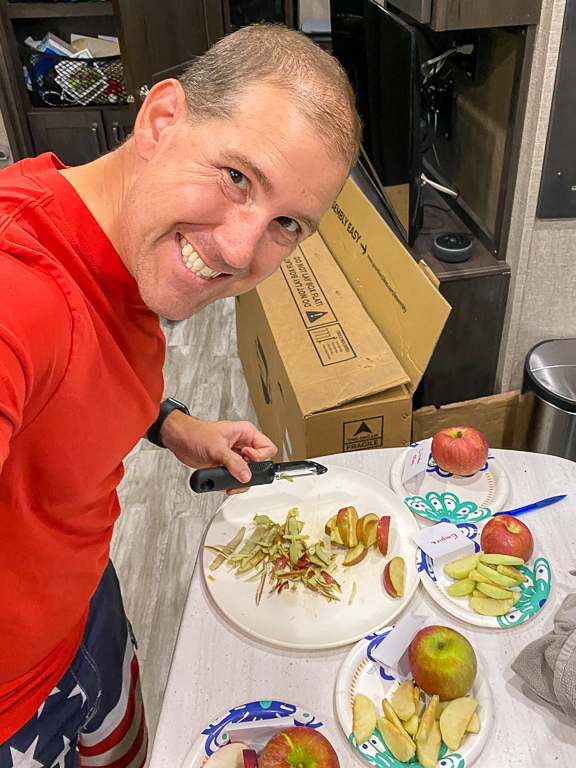 Then diced them up for Theresa. 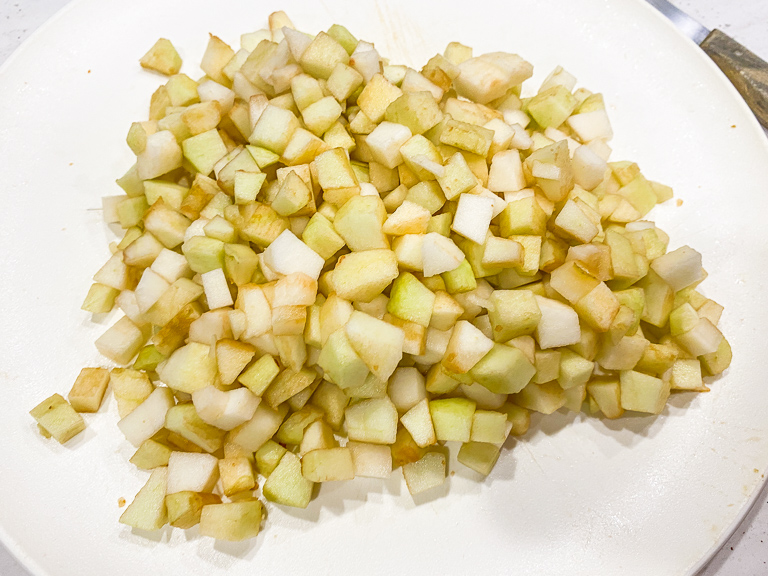 Mix it with the batter. 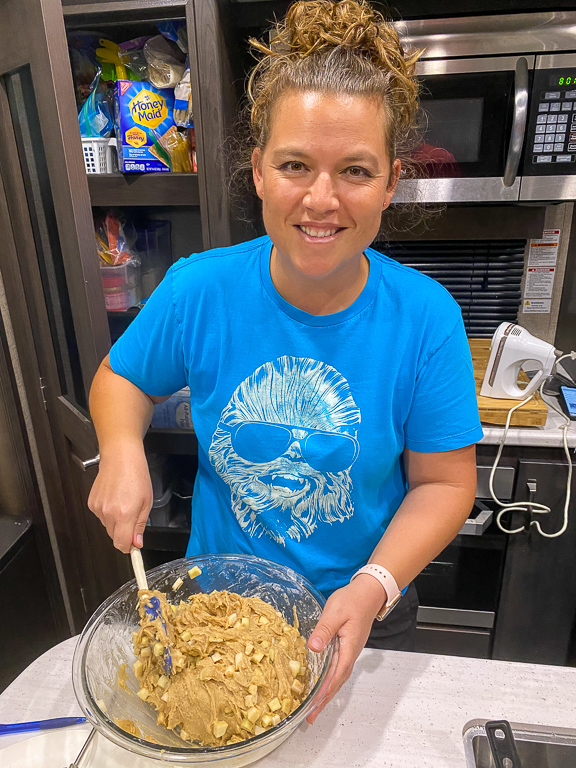 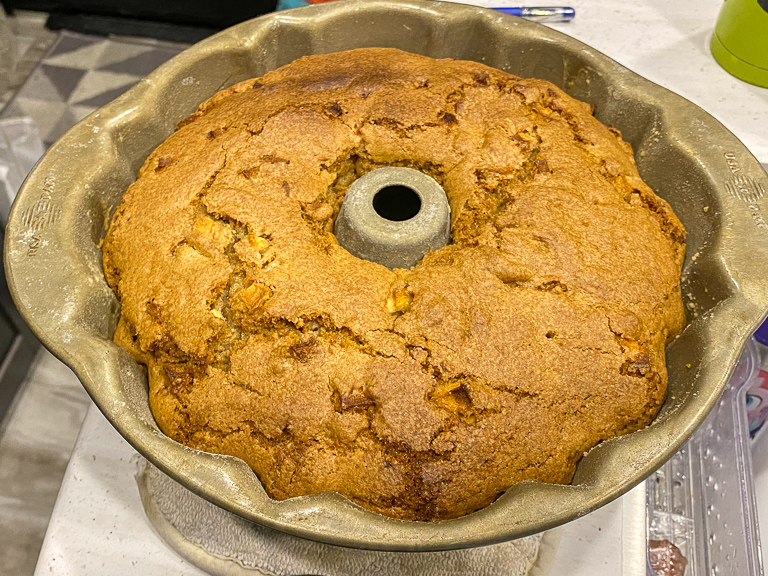 It's smelling so good! 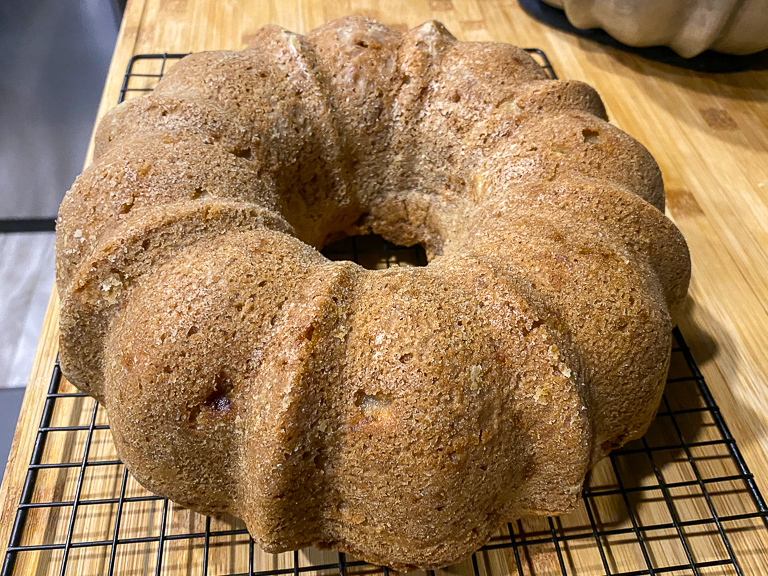 And it tasted fantastic too! What a great thing to do with all our leftover apples!
This was a good taste test! 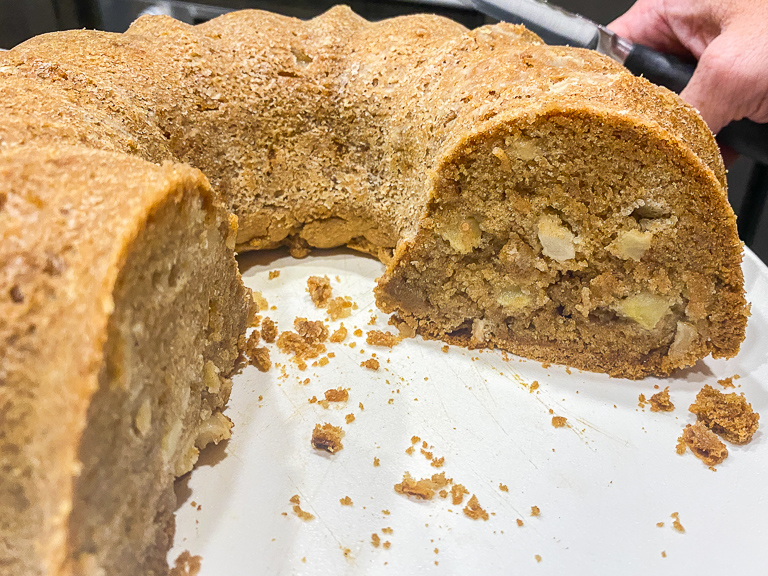