Sometimes you just meet the nicest people randomly. Such was the case for us when we met Jake and Pauline Couture. I was trying to back my RV into our campground site and was having difficulty getting it lined up between the trees. Jake came over and gave me some help. To say thank you, I made a loaf of Rustic Bread and brought it over to their camper. We chatted for a while and Pauline asked us if we'd like to try some maple syrup. Then Pauline and Jake invited us up to their farm where they make Real Vermont Maple Syrup! How could we say no to that? It wasn't a short drive to get there. Over 2.5 hours in the truck, but the drive was pleasant and the kids passed the time by reading, writing up their thoughts on our adventures, and playing games.
We're here! Couture's Maple Shop! 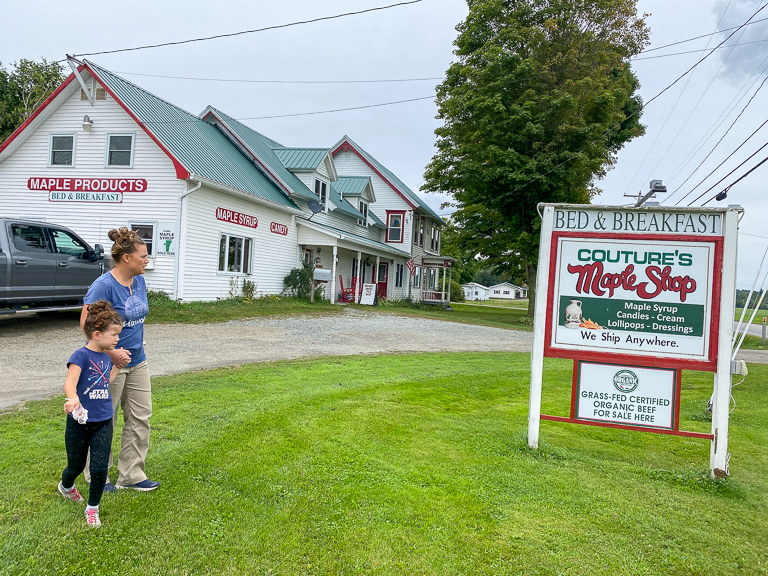 I had been texting with Jake earlier to figure out a good time to come for a visit. They're both still very busy with meetings and running the shop, but there was a good 90 minutes they had available. Both Jake and Pauline were waiting for us as soon as we went inside.
Jake (Jacques) and Pauline certainly know their stuff about Maple Syrup. Jake was previously the President of the Vermont Maple Foundation, and in 2014 they were voted Outstanding Maple Sugar Makers of the Year! 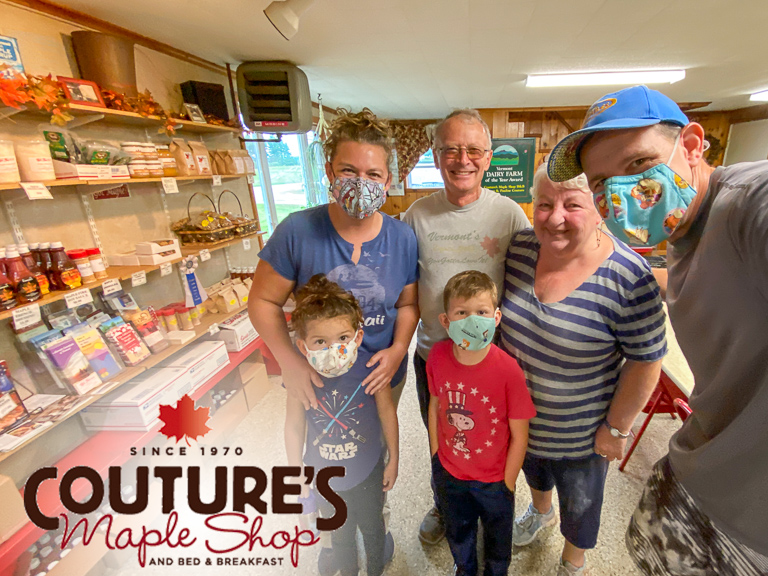 They've been busy all morning making goodies for their shop, and Pauline just finished making homemade apple sauce for a church social coming up. These are the extra apples she didn't use, and we got to take some of them home! 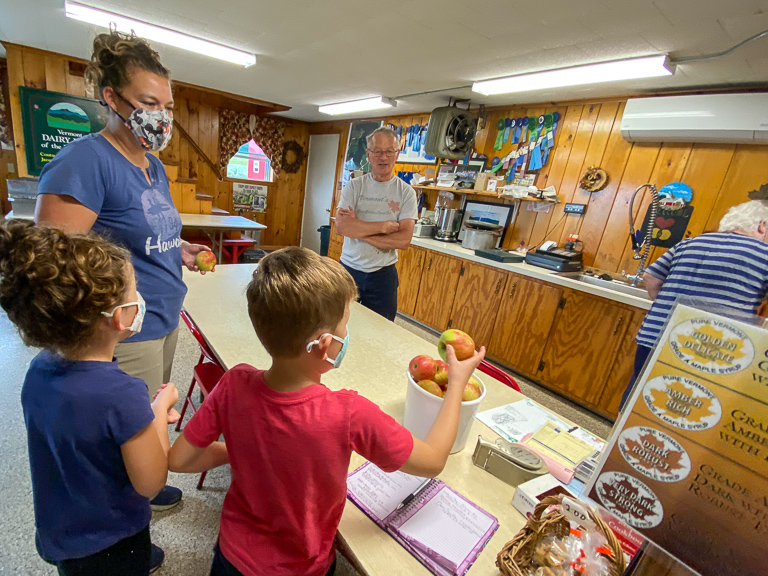 During certain times of the year, they turn their house with its extra rooms into a Bed and Breakfast. Pauline cooks up breakfast with a heavy emphasis on Maple Syrup.
We've got as much time as they're willing to spend with us, so we all went into their living room to watch a video on how maple syrup is produced. It's seasonal and only gets made in March/April each year. 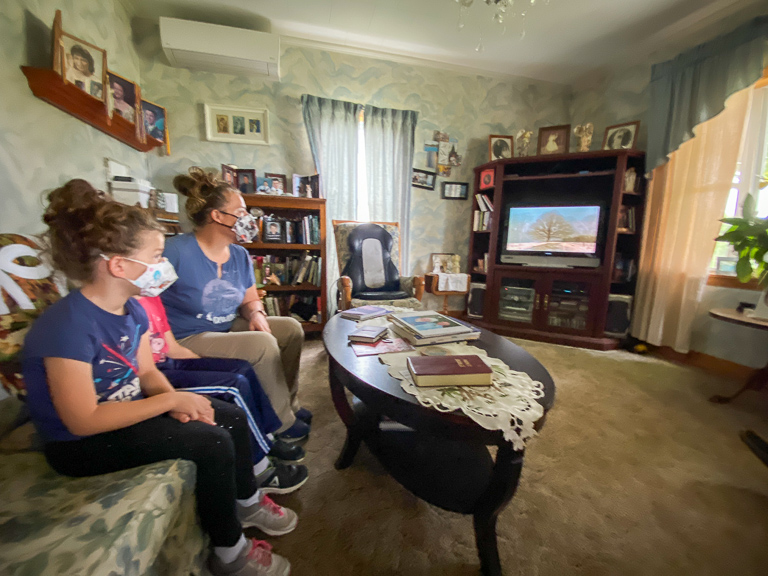 This video was produced by VermontMaple.org, but it doesn't seem to be available online. Jake (Jacques) and Pauline were even featured in the video, and lended their voices to the narration. 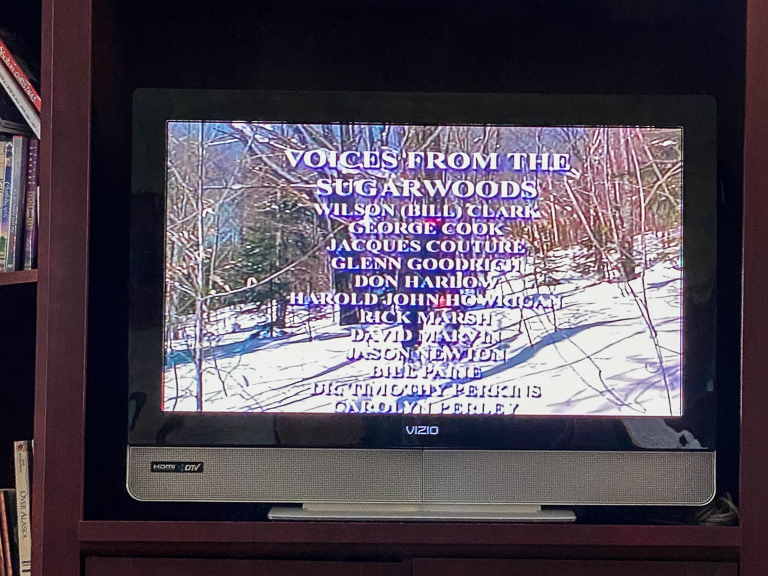 Since I can't find their video, here's another showing the process of how Maple Syrup is made.
Afterwards the kids found the "grandkids" playroom. I think I had one of those Fisher Price farm playsets growing up. I bet my mom even still has it. Pauline played pick-up-sticks with them at the kitchen table for a little while, which they enjoyed. 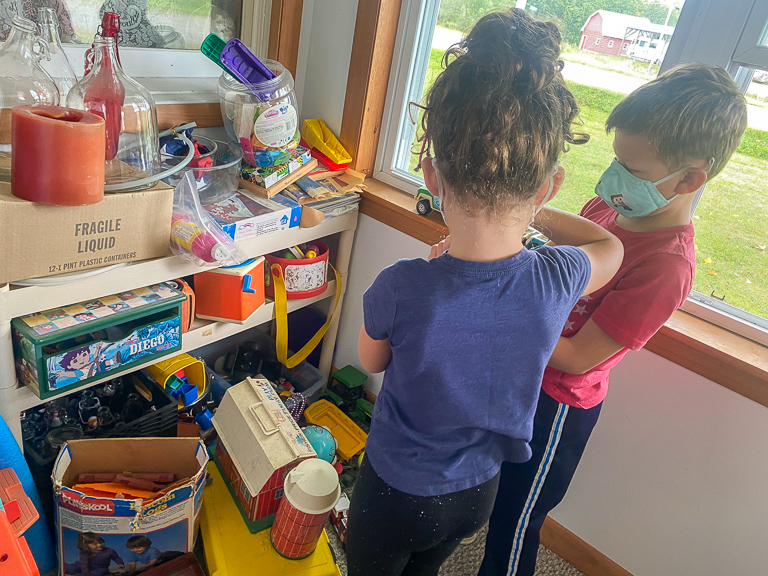 We're a little early in the season for it to be looking like this here, but this was a beautiful photo of their farm that's hanging on their wall. Look at all those colorful trees. 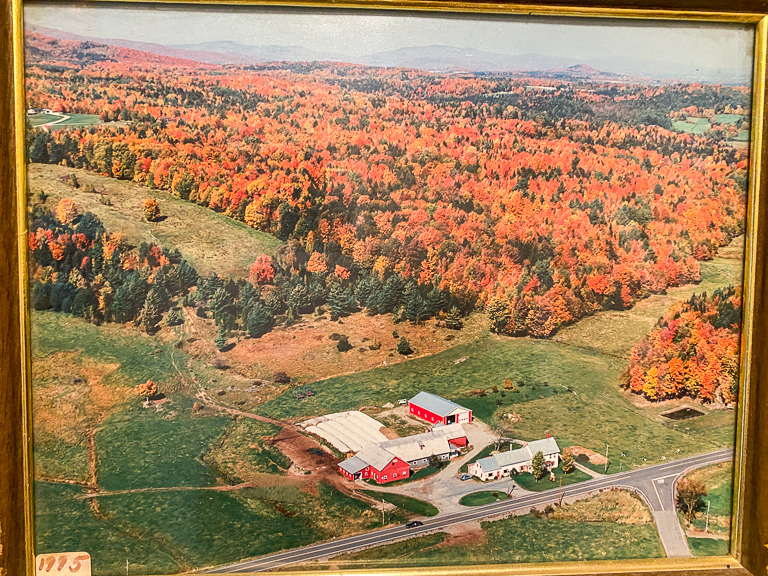 The Coutures have over 7500 Maple Trees on their property that get tapped for their sap each season. The trees have to be at least 40 years old in order to be able to tap it without hurting the tree. Trees need to be 10" in diameter or larger. And trees that are even bigger can have 2 or 3 taps on them.
In the old days, each tap would have a bucket hanging on it. Those buckets would get emptied into a larger container and carried to the Sugar House, sometimes by horses and sleds. These days there's a much less labor intensive process. Each tree gets tapped, but a plastic hose is attached, which gets connected to an even bigger hose. Either gravity or a vacuum pump brings it to the Sugar House. 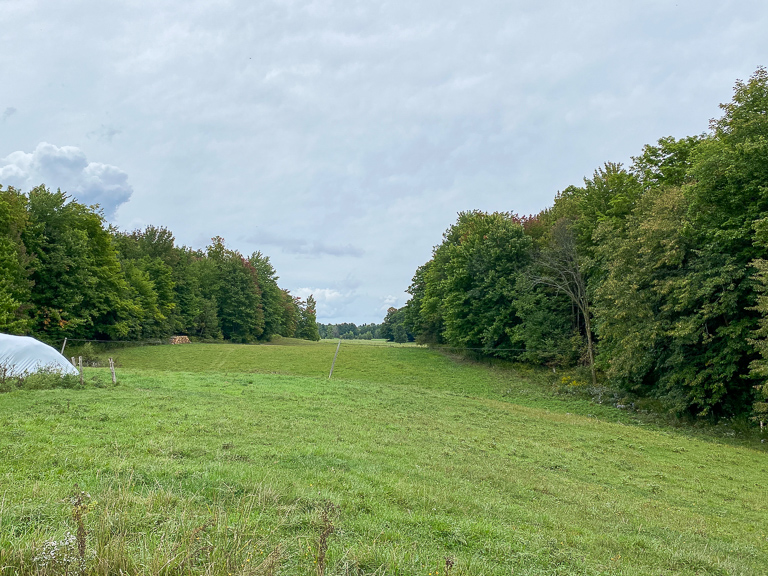 Just up the hill from their farm is the Sugar House. There's a ridiculous amount of wood here! It takes a lot of wood to boil the maple sap and turn it into maple syrup. These logs are from trees in their woods. The maple forests are thinned to keep the trees healthy and growing strong. 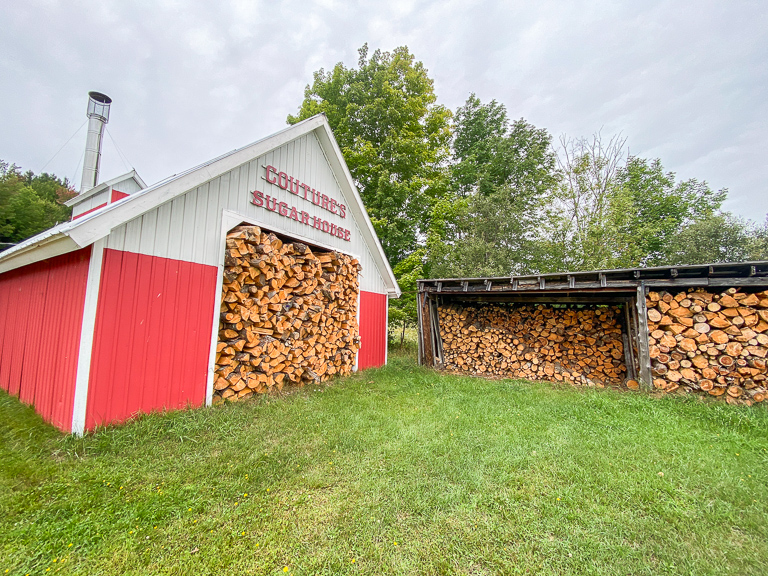 Inside the sugar house is a giant pan for boiling the maple sap. The sap is only about 2% maple sugar. In order to turn that into syrup it needs to be 66% percent maple sugar! That means that 40 gallons of maple sap only makes 1 gallon of maple syrup!
Jake said that when they are boiling sap in the spring the whole place smells incredible. That's something I'd love to come back and experience!
The steam from the boiling sap heats up the holding tanks, which helps bring up the temperature takes less energy to boil. Smart! 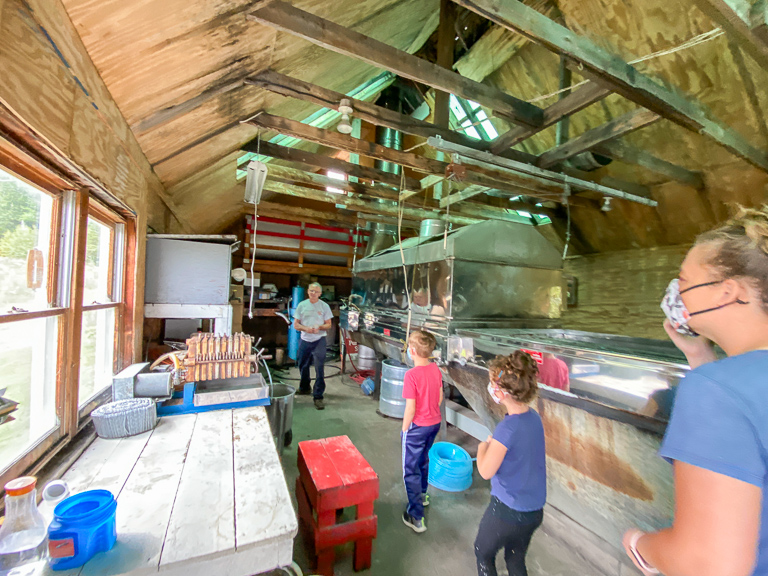 It takes the equivalent of a 4 foot log to create enough energy to boil the water to make 1 gallon of syrup. They keep it close by to keep the fire fed. 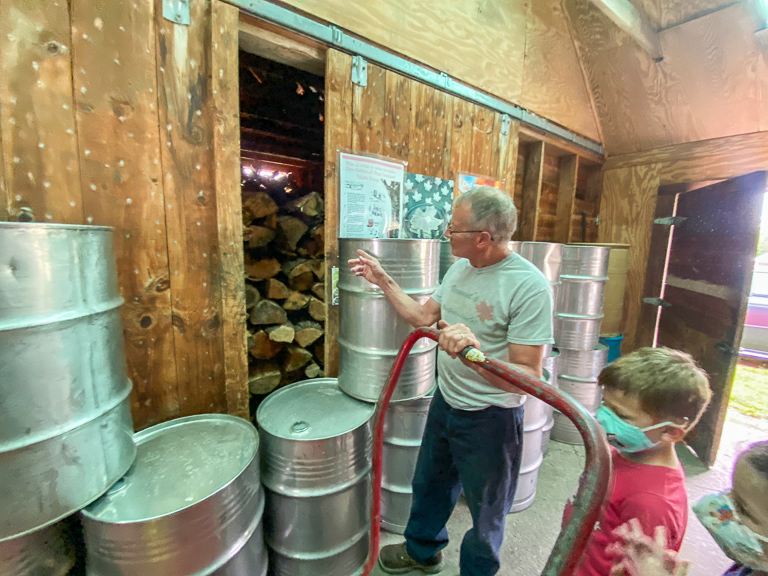 And here's where that happens. 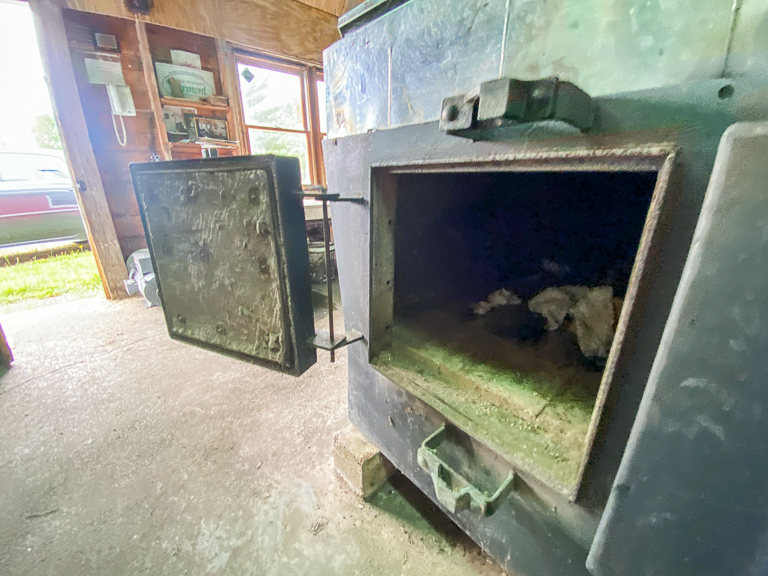 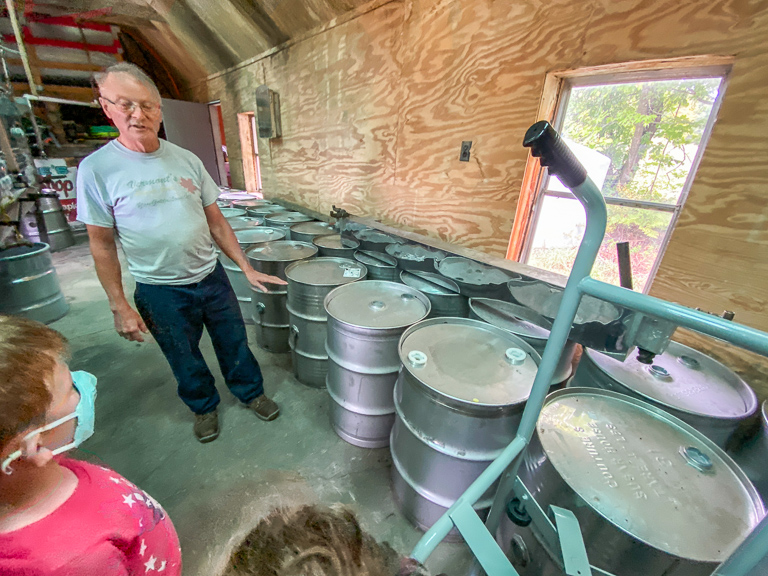 I've always seen the different colors of maple syrup. I thought it was because the darker syrup was boiled longer, caramelized or something and took on more color. That's not actually the case at all! I said that the maple season is 6 weeks long. The sap that comes as the beginning of the season is very light. As the season goes on, the sap takes on a stronger maple flavor and a darker color. By the end of the season it's a very dark color and starts to get bitter. But no matter what the color, the process is the same, and when it hits 66% sugar content it's syrup! The color is compared to an industry standard and it's separated into grades.
And speaking of grades, that's another thing that has changed relatively recently. The old system had grades like Fancy, Grade A, Grade B, and Grade C. But Grades B and C always got a bad rap, because why would anyone want Grade B or C when you can get Grade A? It's all the same syrup, but with a stronger flavor.
In the new grading system, it's all Grade A syrup. The differences are the flavor profiles, with Delicate, Rich, Robust, and Strong tastes. That's much better. 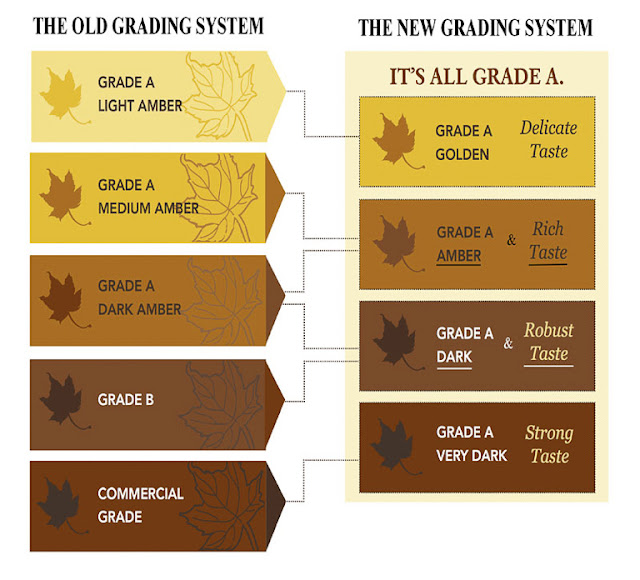 After exploring the Sugar House and seeing that process, Jake took us over to see his apple trees and garden. The kids love apple trees! 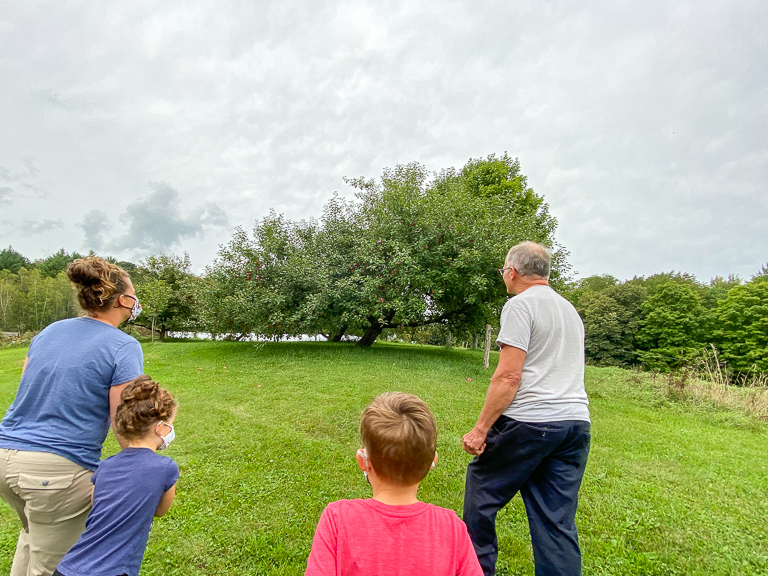 They got to pick any apples that looked good. And there were even berry bushes and a pear tree! 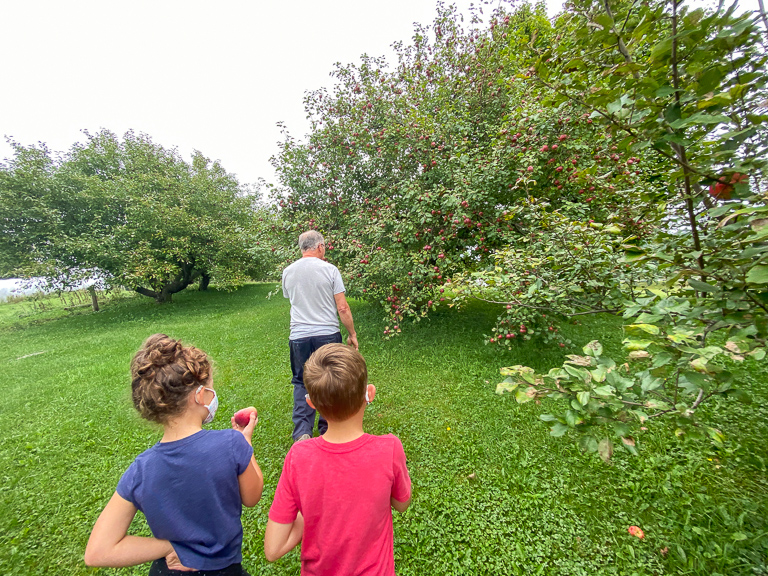 Over in the garden, Jake walked through it calling out different vegetables they'd planted.
Jake - Do you like Zucchini? Then here, have a few of these.
Jake - Have the kids gotten pumpkins yet for Halloween? They can each have one of these then.
Jake - What about squash?
I think the only thing Theresa turned down was the turnips, and Jake himself said he wasn't sure why they'd planted so many. 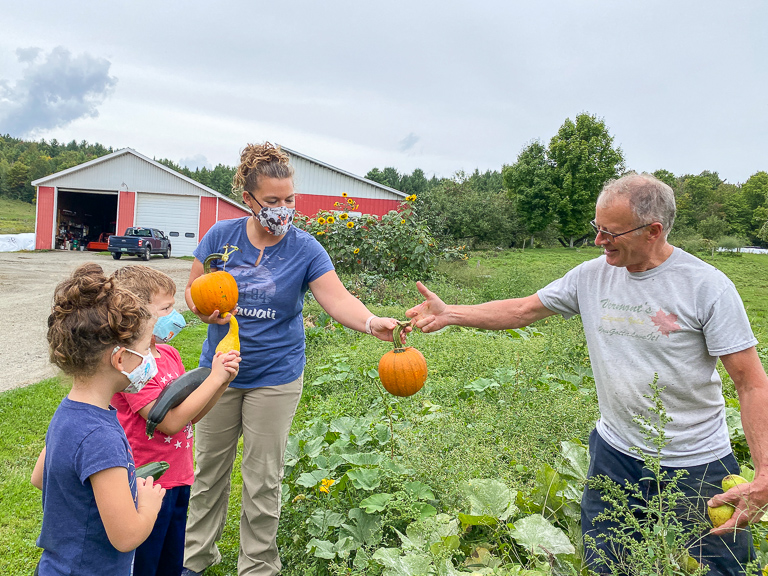 Out in the front yard, there are two Maple Trees that are special to the Coutures. They planted these in the 80s when their sons were born. Because they are out away from everything else and not competing for food, rain, and sunlight, they grow very well. 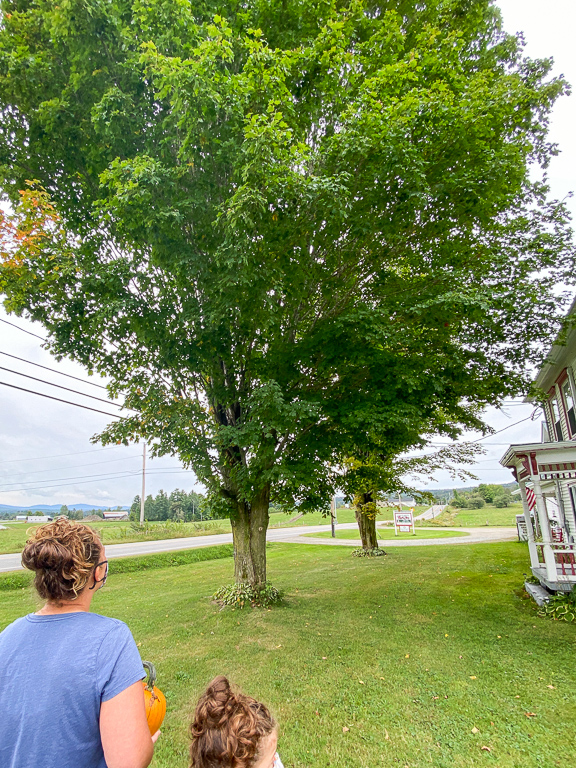 Well enough that they are much larger than 10" in diameter and they can put taps in them. These are the only trees on the property that have the old metal buckets, collecting sap during the sugar season.
What was supposed to be a 90 minute tour turned into more like 150 minutes! We've had such a good time seeing everything. The kids got to ask as many questions as they wanted and Jake was good to explain everything in detail. 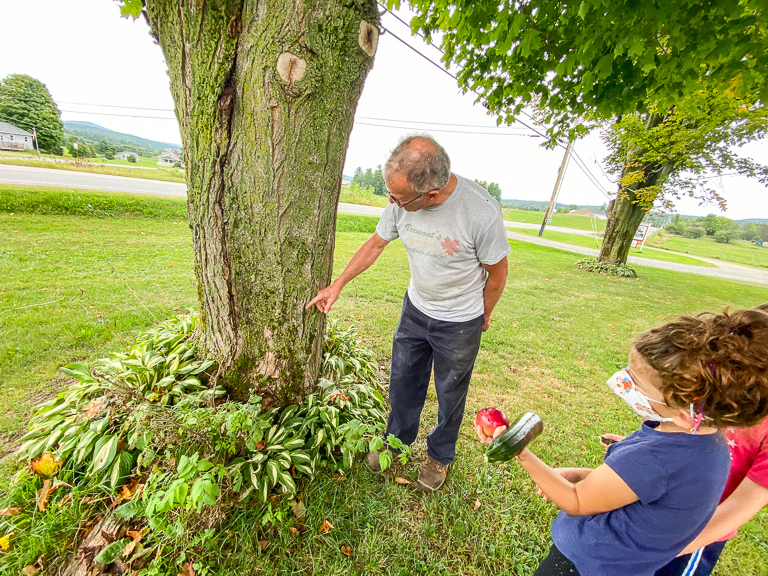 Okay, we've seen the Maple Syrup process. Now lets go into the store and see what tasty treats they have made from them! 100% of the maple syrup they harvest is sold here in this store or online. None of it will go to another store. And truthfully, their prices for maple syrup are great. Sams Club sells a gallon of maple syrup for ~$44. Theirs is only $50. We've been in a few other shops and have seen $70-$80 per gallon. 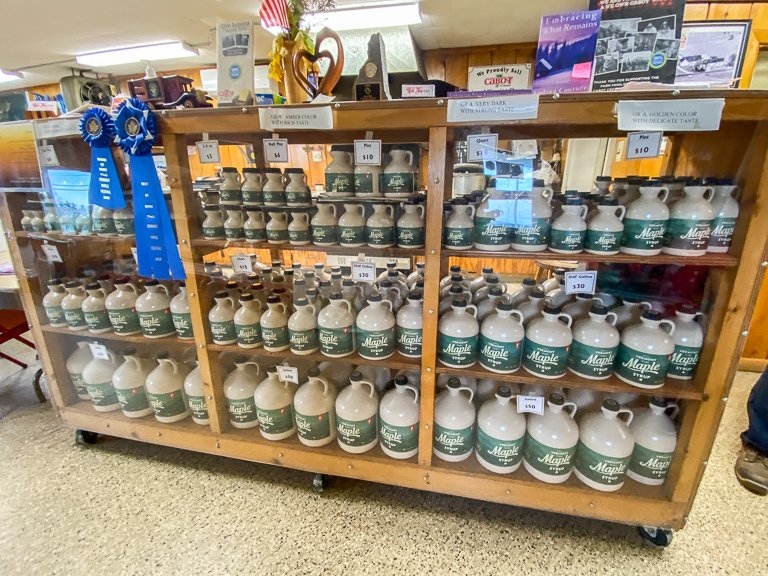 Looking at the walls, they are very proud of the maple syrup they produce. They've collected countless ribbons from County Fairs. 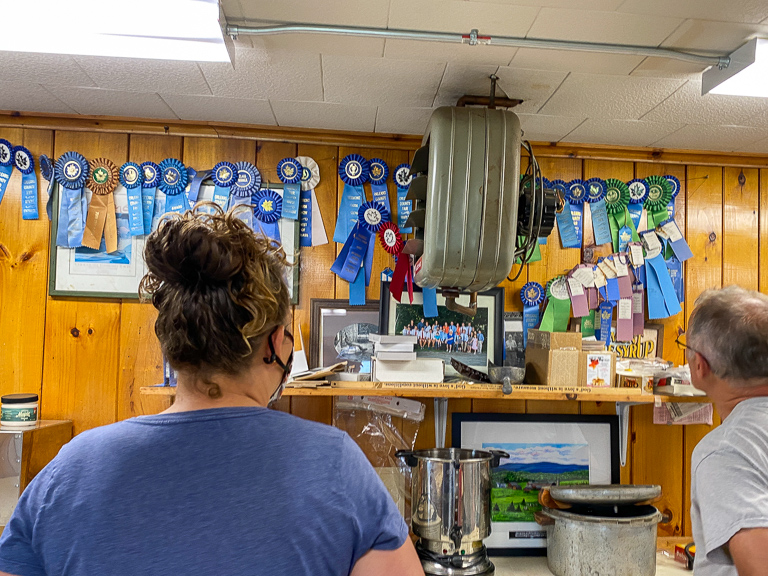 And their Maple Syrup and Maple Candies have ranked very highly in many contests too. 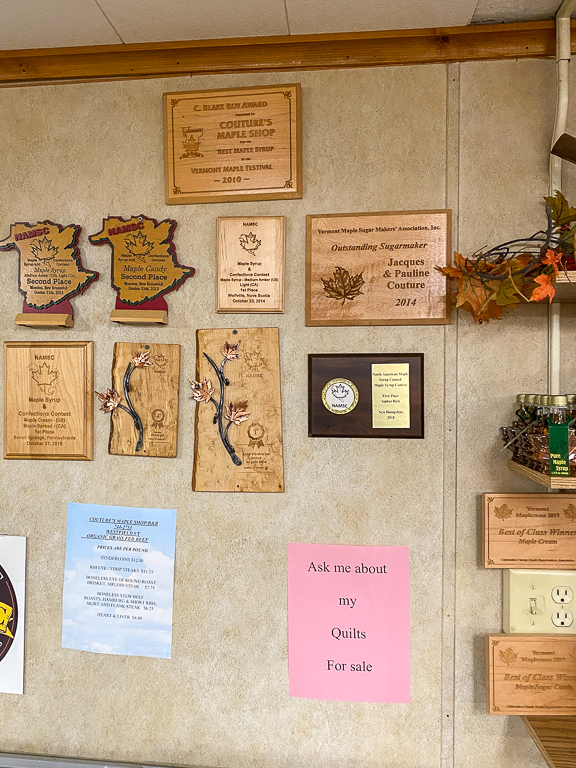 Jake - Have you ever tried Maple Cream?
I've never heard of maple cream. We each got samples. 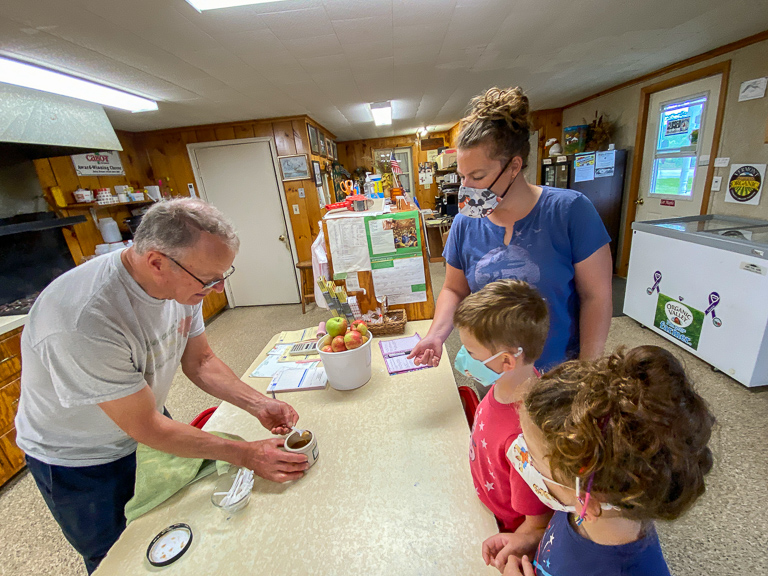 That is delicious! Normal maple syrup is heated to 219F, but maple cream is heated to 234F. This drives out additional water and then you can beat and whip it until is takes on a smooth buttery consistency. It was really good. 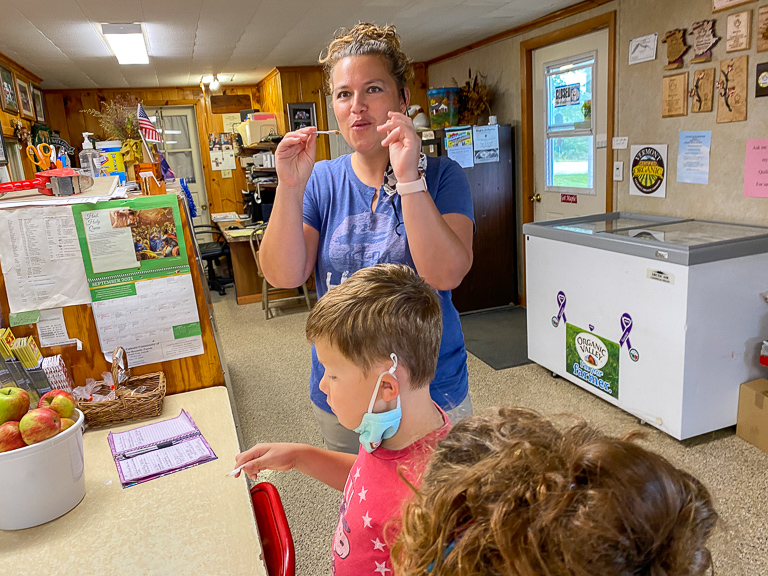 Jake just made these maple candies earlier this morning. Similar to the maple butter, the maple syrup is heated more to drive out the water and then poured into molds, appropriately a Maple Sugar leaf. The candies are dried and then a thick maple syrup is poured over the top of them to form a protective moisture barrier. We got to sample those too. So good. I do love maple. I wish my mom was here to try all this and experience it. She loves maple! We'll just have to bring her some. 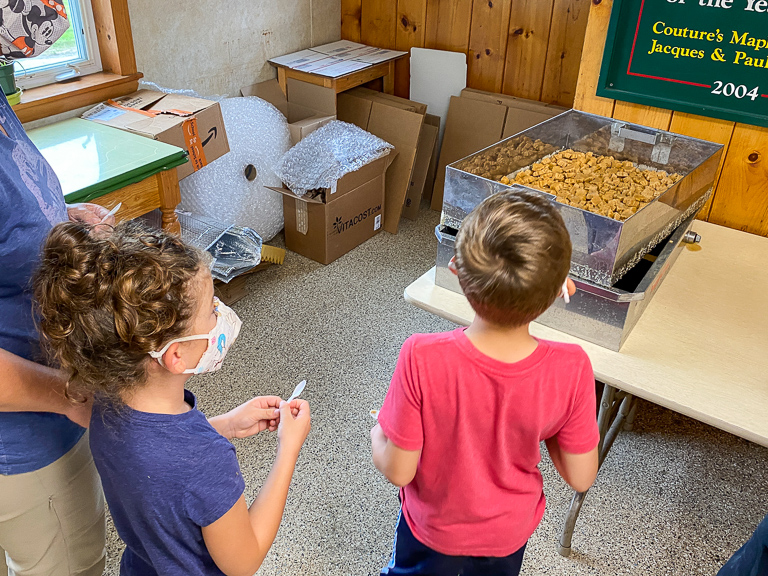 Here's a look at our maple haul. When we left, we got about 30 minutes down the road and both Theresa and I regretted not buying more Maple Syrup. We got enough for us, but I bet the whole family would love it. Tasting it, Theresa and I agreed it's the best maple syrup we've had. Fortunately when we run out, we can order more from their online store and they'll ship it right to us! Visit MapleSyrupVermont.com to check out everything they have to offer!
Anyway, from what we bought, of course we've got the 4 different grades of maple syrup. You know we're going to taste them all and see which one we like best. The maple cream was too good not to bring home a jar. And the maple sugar candies were melt in your mouth delicious. Along with those, I bought a spicy Maple-Fire Hot Sauce that Jake said they made this morning, along with Maple Cotton Candy (love it), Maple Drops, Maple Coated Peanuts, Maple Coated Almonds, and Maple Lollipops. You know this is going to be a whole separate entry where we're going to try all the different maple items! 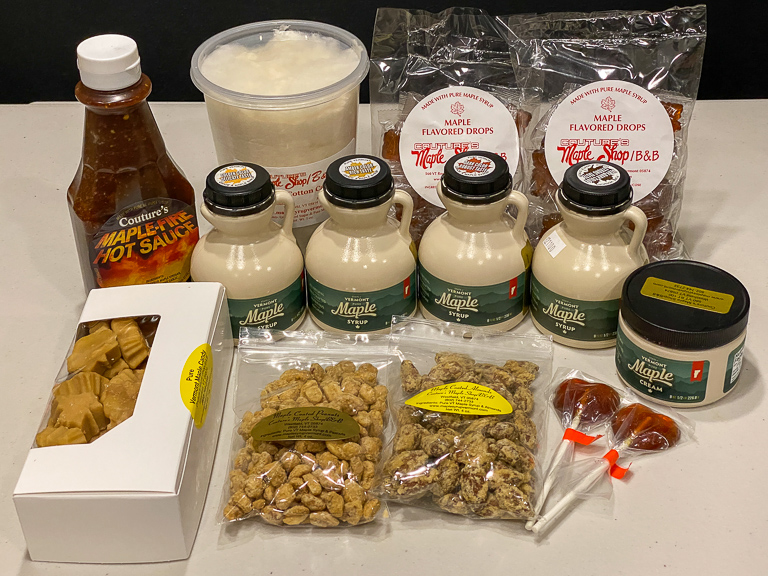 And the kids loved getting all the veggies and fruits! 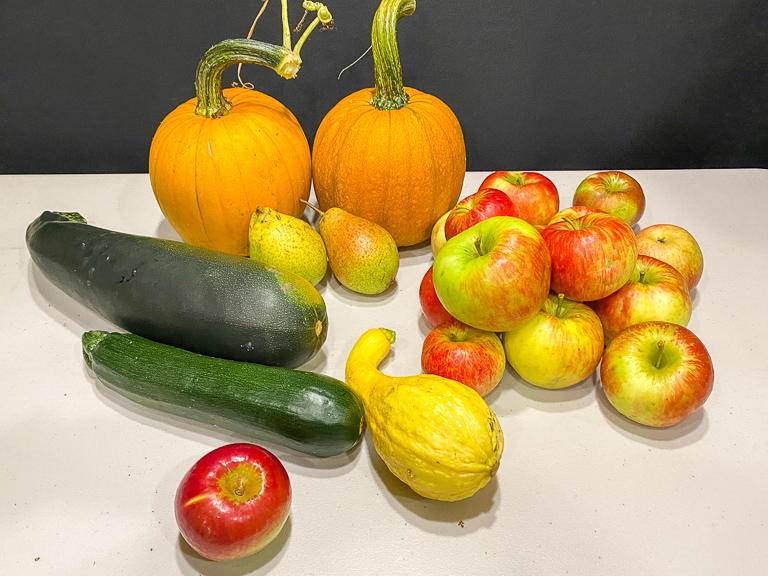 We really had a fantastic time at the Couture Maple Shop and Sugar House. It's amazing how it all came together because Jake offered to help with me backing the RV in.
Before we left the New Hampshire campground, the kids both wrote Thank You letters and drew them pictures. Thank you Jake and Pauline! I hope our paths cross again in the future!
But we're not quite done yet. They also have a dairy farm! We'll pick up the story there next! 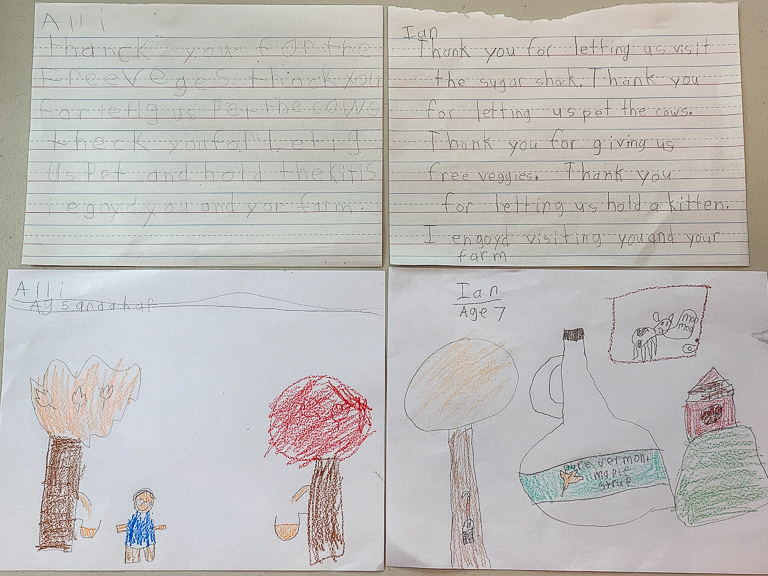