It's been a fun week at Acadia, but we've only got a day left. It's time to go out and explore some of the places we haven't covered yet. Plus the kids need to finish up their Junior Ranger Program and earn their badge. Let's get started! 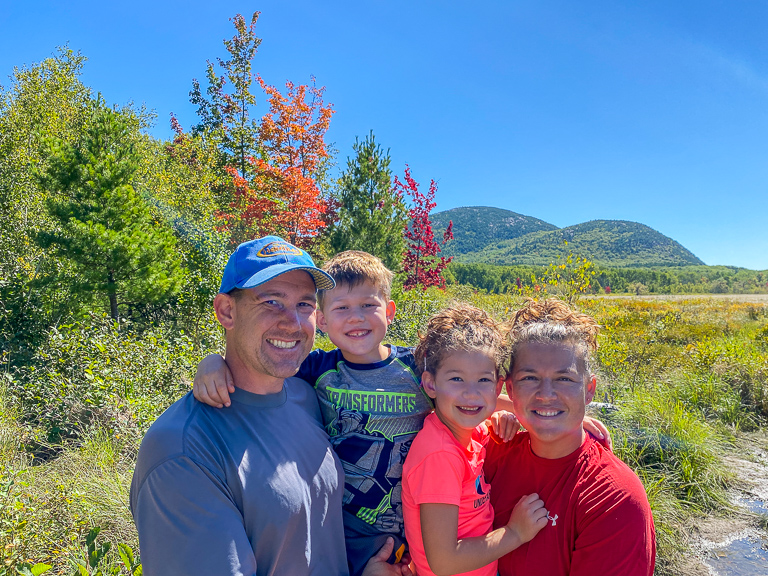 One of the requirements for the kids' Junior Ranger program is to complete a Ranger talk. At Sieur du Monts Nature Center there's a Ranger Station set up, specifically to help them complete their Junior Ranger badges. 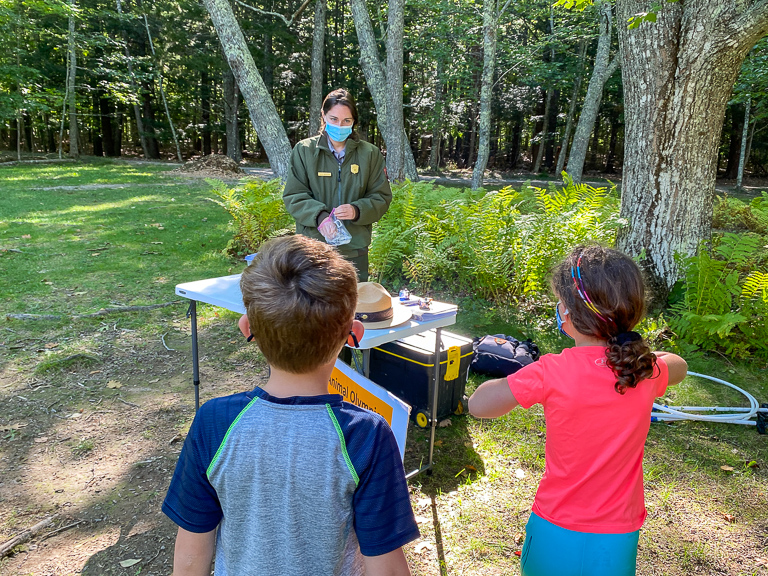 Here the kids are learning about the different animals at the park, and running an Animal Olympics.
They also get to interview a ranger. Ranger Lilly told them her favorite part of the park (the beaches and the ocean for swimming), and they got to ask her questions.
Alli wanted to know if they planted all the mushrooms that we've seen on the trails, or if they grew themselves. Ranger Lilly said they grow all by themselves because of the great conditions. 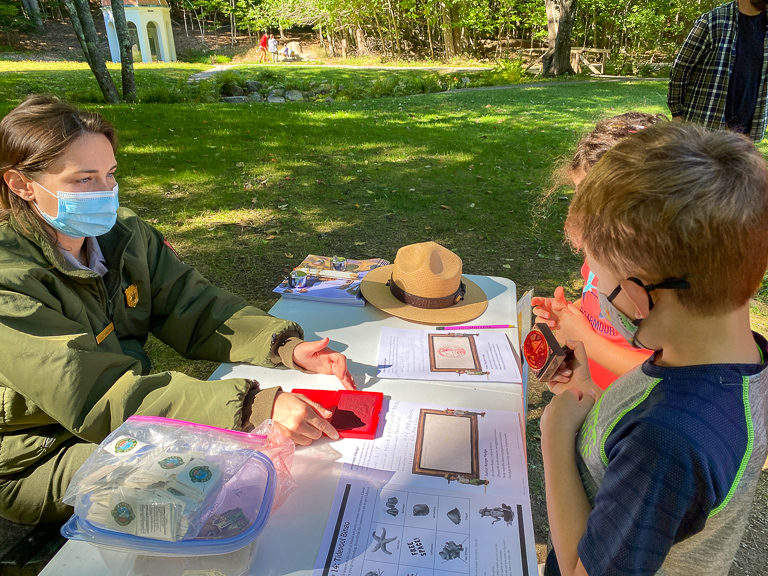 Sieur De Monts is the heart of Acadia National Park. It was designated a National Monument by President Woodrow Wilson in 1916. 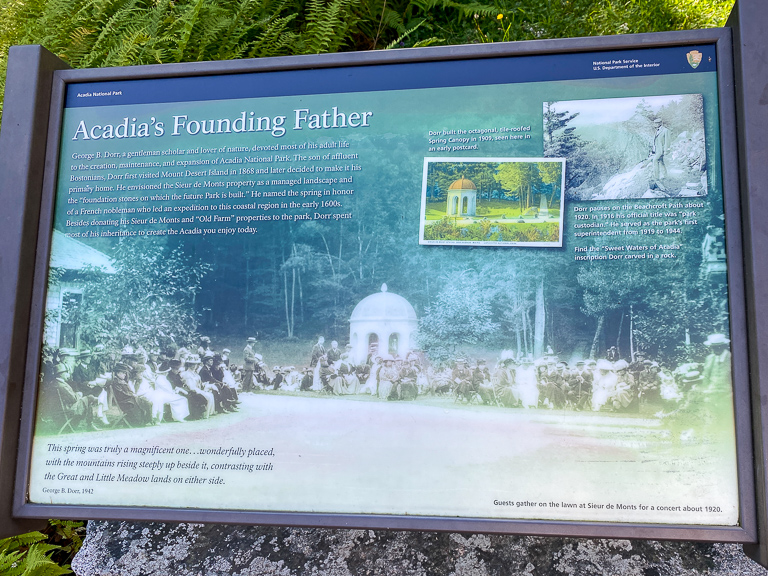 George B. Dorr is called the "Father of Acadia National Park". He and Charles Eliot organized the donation of this land, and Acadia is the first National Park created from private lands that were gifted to the public. John D Rockefeller Jr financed the carriage road system that covers the park. 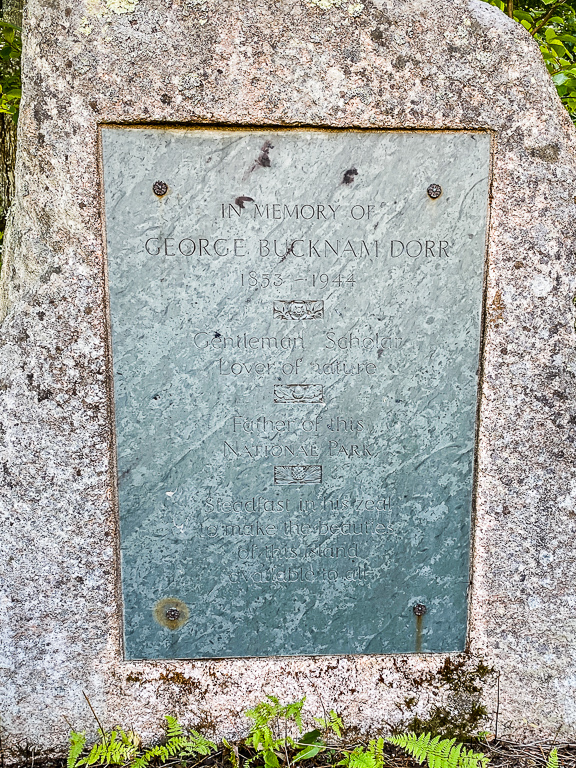 Sieur de Monts Spring House was one of the first buildings of the park. Built in 1909, the spring house was built over the cool spring waters and was used to help keep perishables from spoiling. 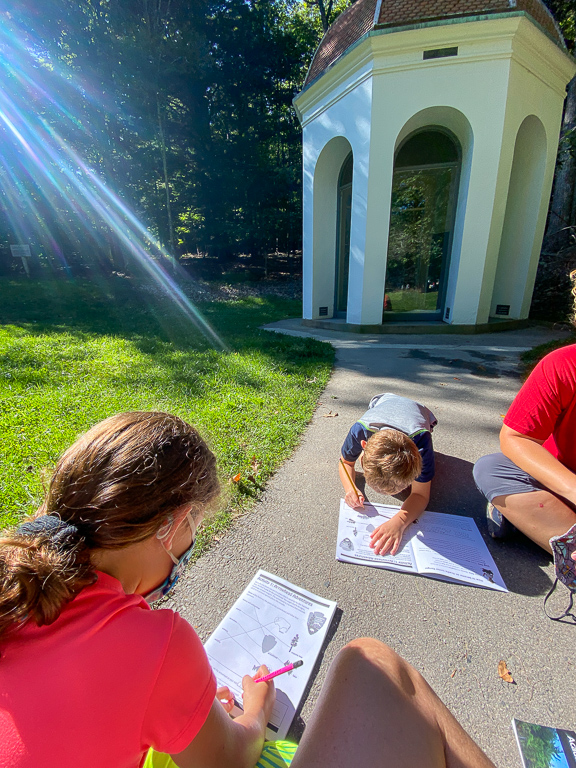 The kids completed their Junior Ranger books in its shadows. 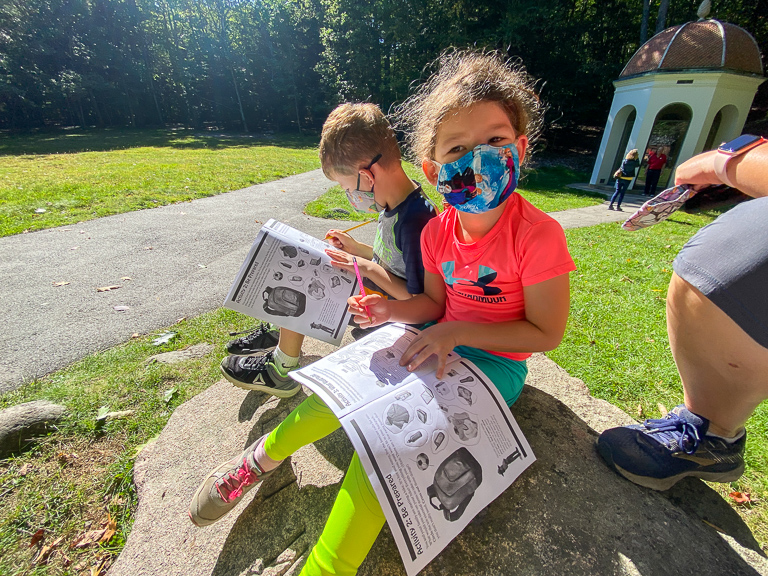 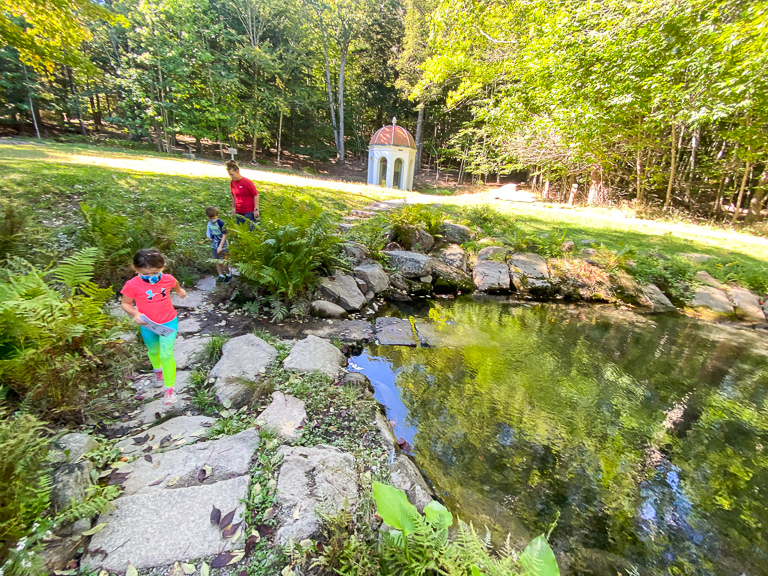 Back over to Ranger Lilly where they got sworn in as Junior Rangers. 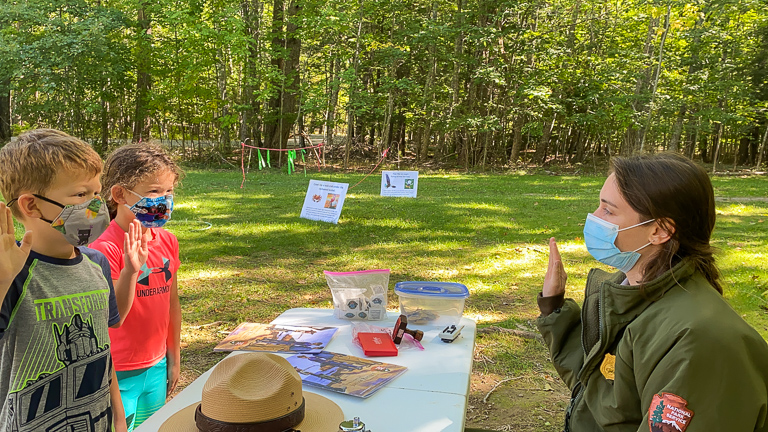 Done! We're going to need to get you a vest soon to display all your badges! 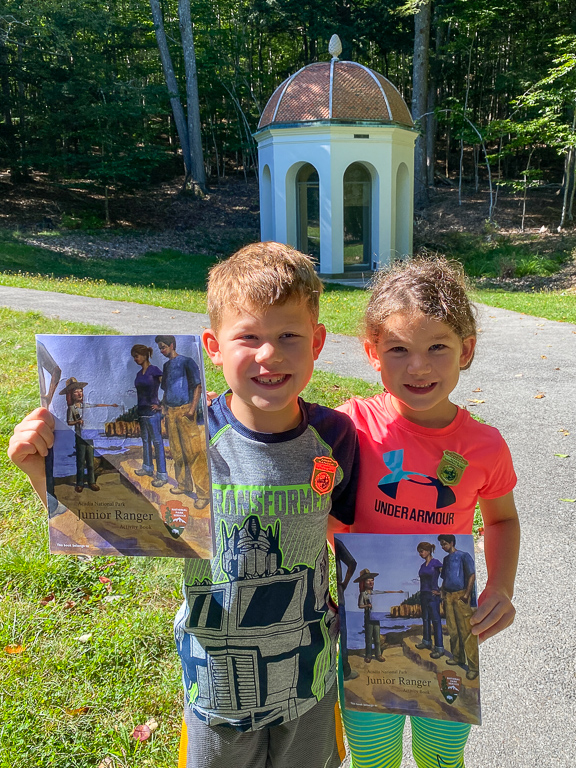 A closer look at that badge. 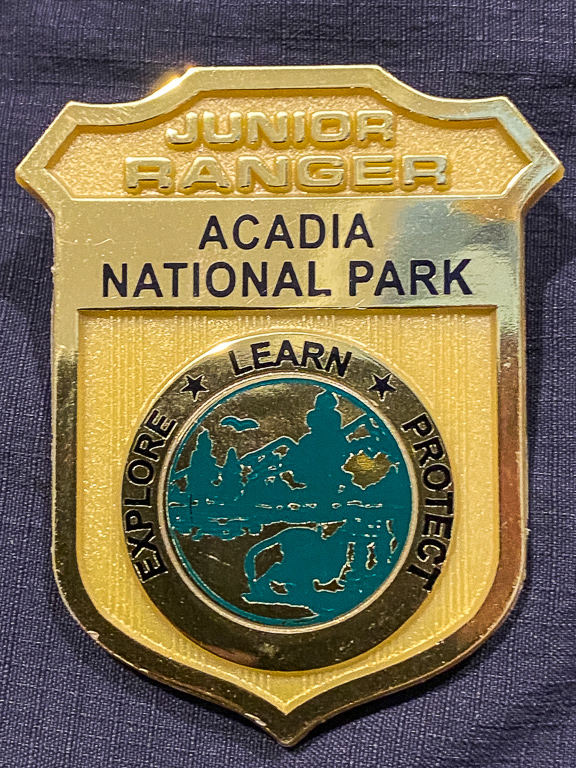 Nearby are the Wild Gardens of Acadia.
John Keats - A Thing of Beauty is a Joy Forever
Here they've taken all the different zones around the park and made 13 different habitats. 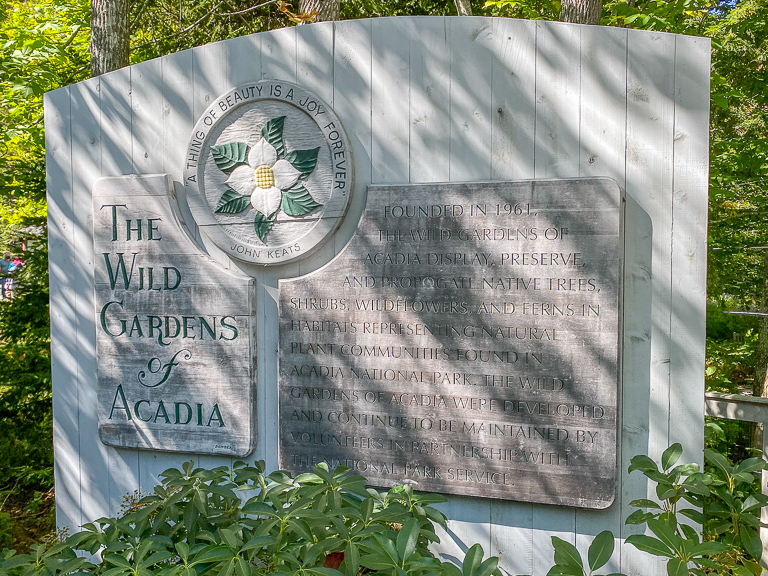 It's a little different with COVID right now, with everything being one-way and certain areas blocked off. 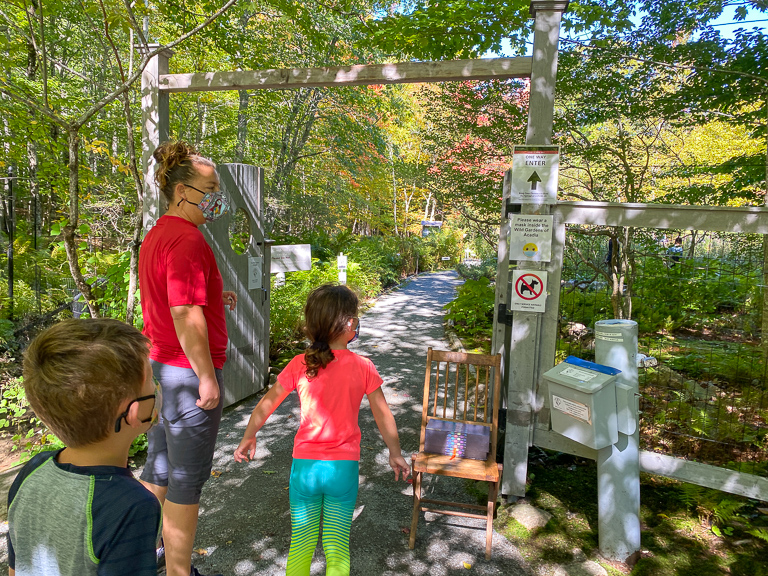 But inside it's beautiful! There's trees in here that are starting to change colors too. So pretty. 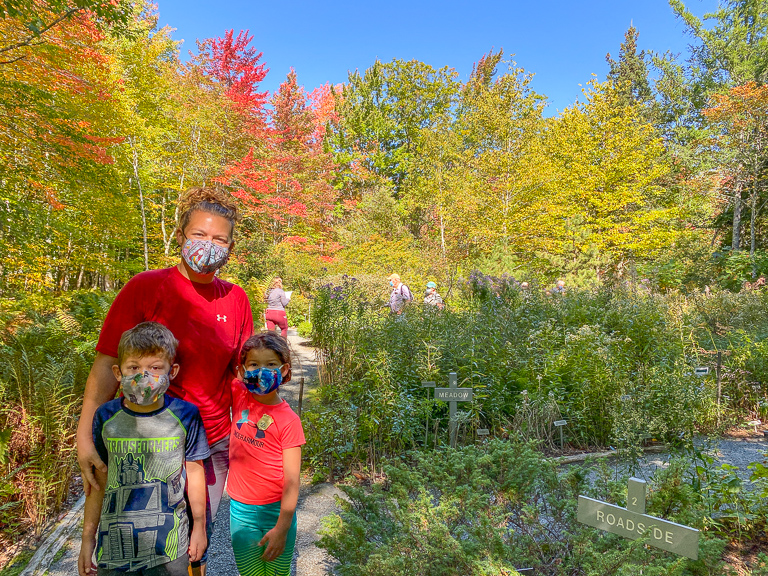 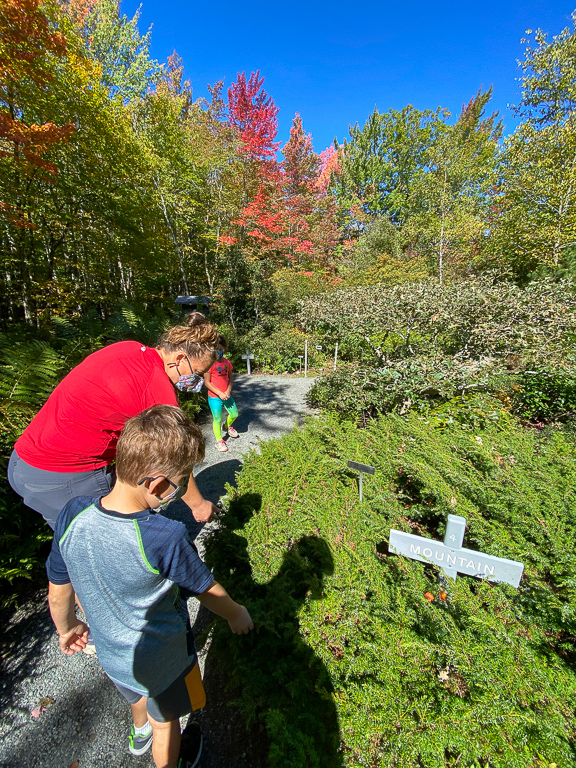 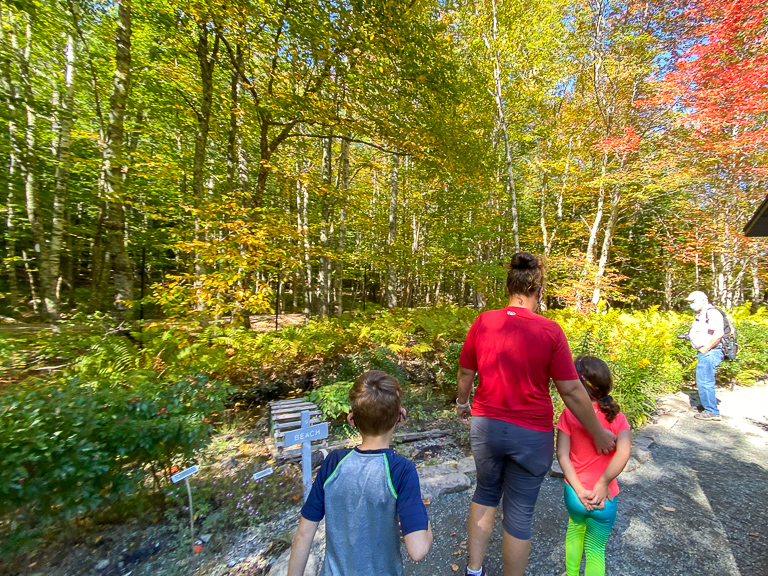 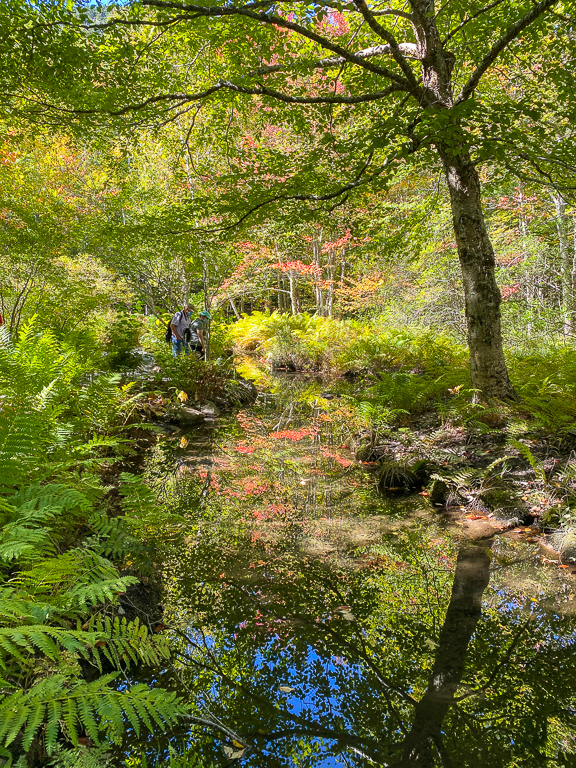 Ooh, Ian was just asking about something like this a couple days ago. He was asking about Venus Flytraps, but these are also carnivorous plants. Pitcher Plants attract bugs with their sweet scent. They fall in and can't get back out, slowly getting dissolved. 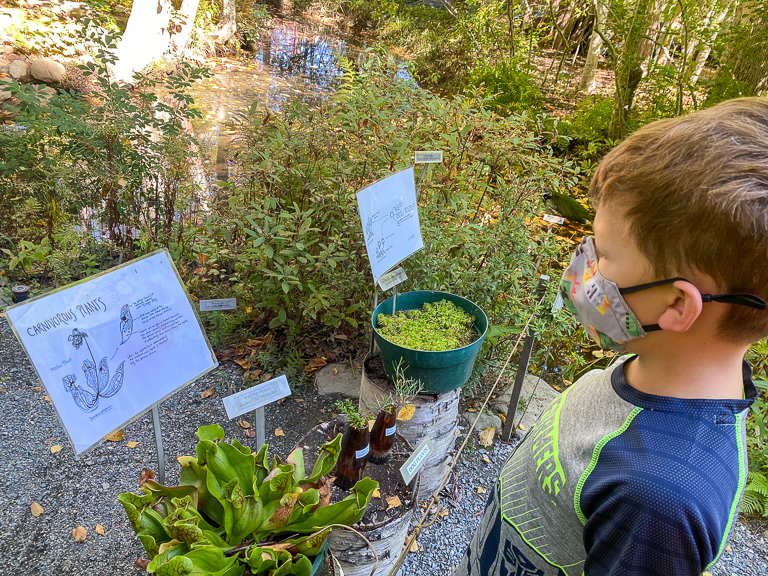 Time to explore some more! A nearby field had some pretty trees that Theresa wanted to stop at.

Driving around the roads, there's plenty of scenic overlooks.

Egg Rock is an island off the coast that was a haven for nesting seabirds. 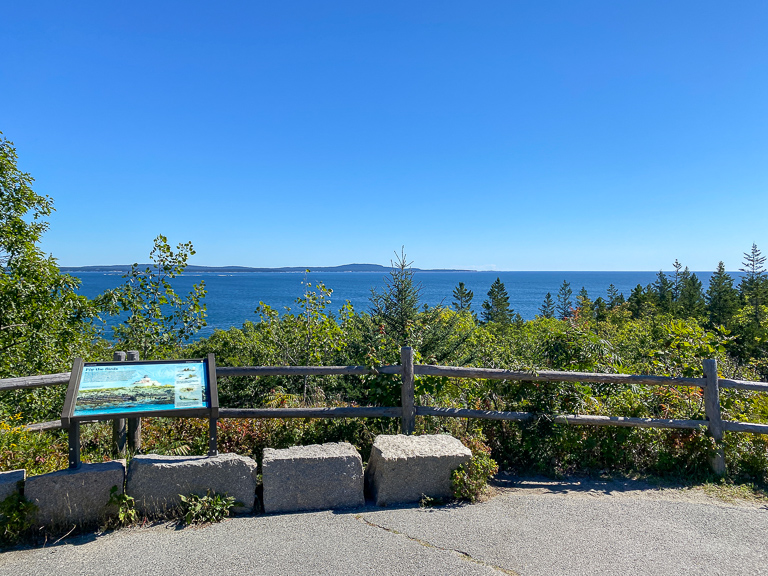 It because known as Egg Rock because people would travel to the island to collect the eggs and the feathers to sell. Many of the seabirds almost went extinct in the Gulf of Maine, but thanks to conservation efforts and changes in the law, their numbers are starting to rebound. 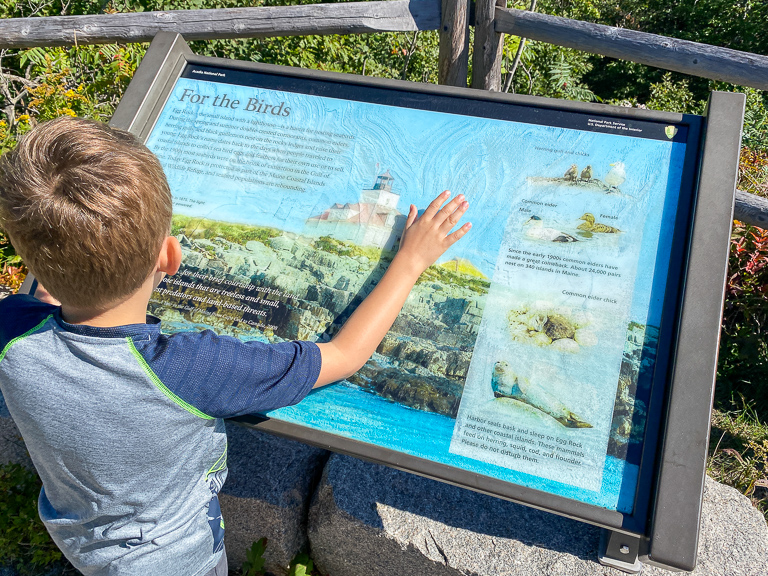 It's still pretty crowded here with people parking along the roadsides. We'd had thoughts of going to Sand Beach and Thunder Hole, where the waves crash at high tide and can act like a blowhole. We kept driving until we found a clear enough place to park the truck. There was a trail beside the road that went by the shoreline. 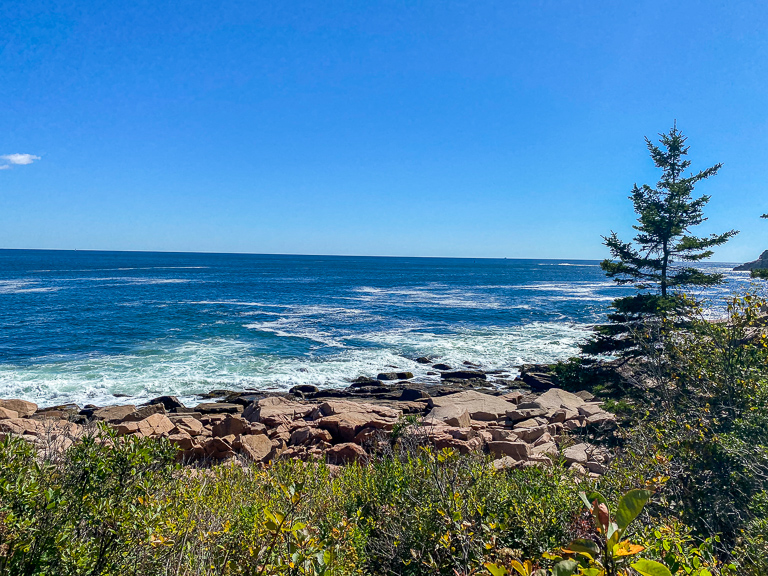 The kids have been enjoying climbing all over the rocks, and when they saw the huge rocks by the water they asked if we could go down to them. There's a trail! Let's go! 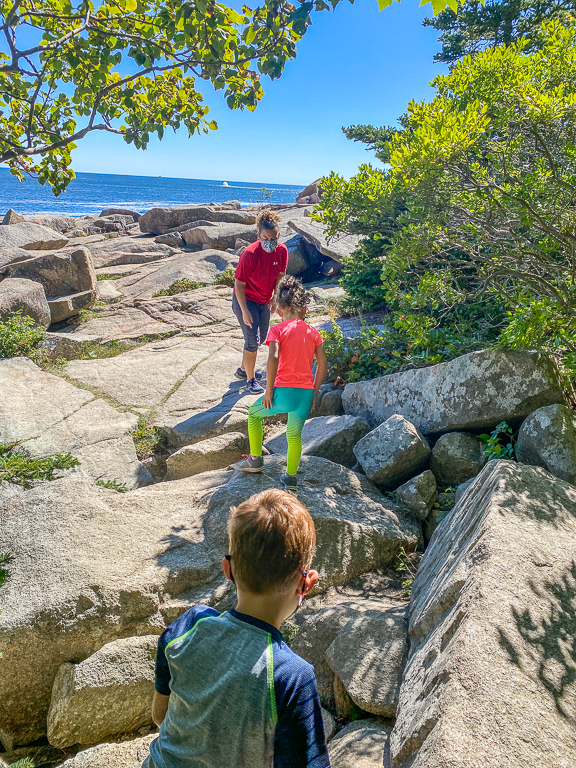 It was high tide so there was a lot of activity! 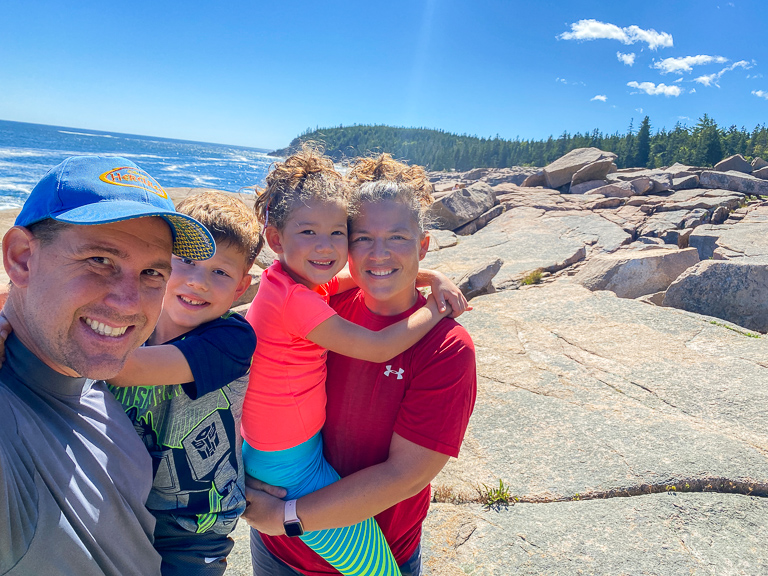 Down by the water, the waves were super active! There was a pool where the water slowly drained, but with the next crashing waves it would fill back up again. 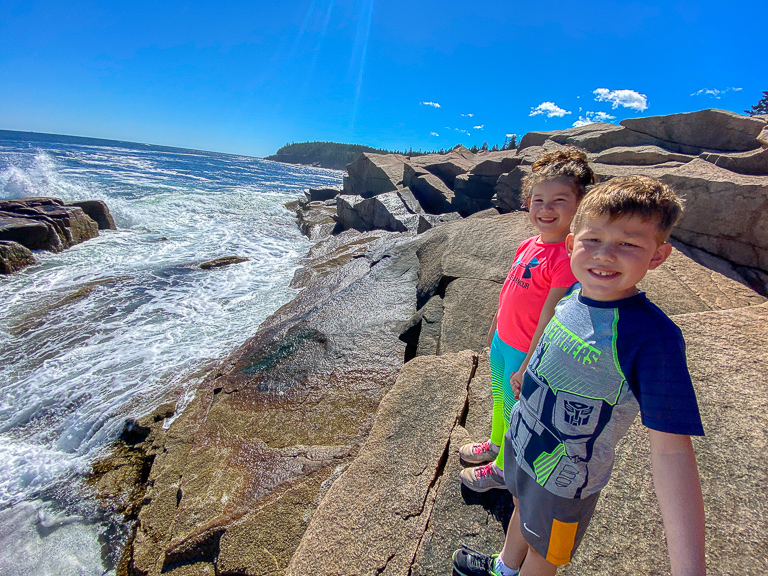 The kids weren't interested in going down there and playing on those rocks. 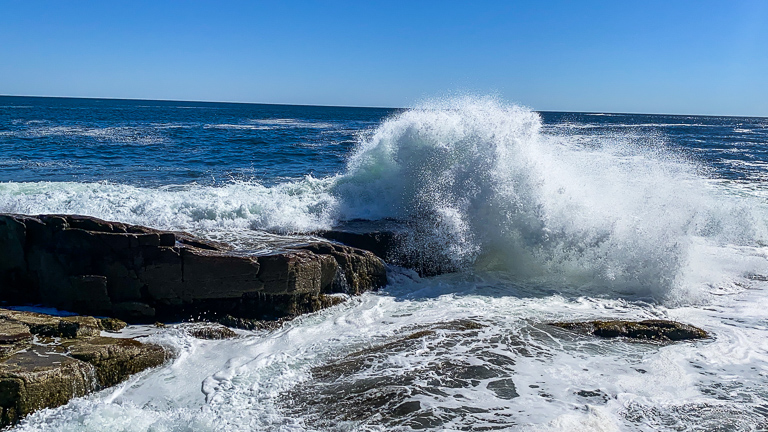 It was a good place to sit and watch the water for a while. 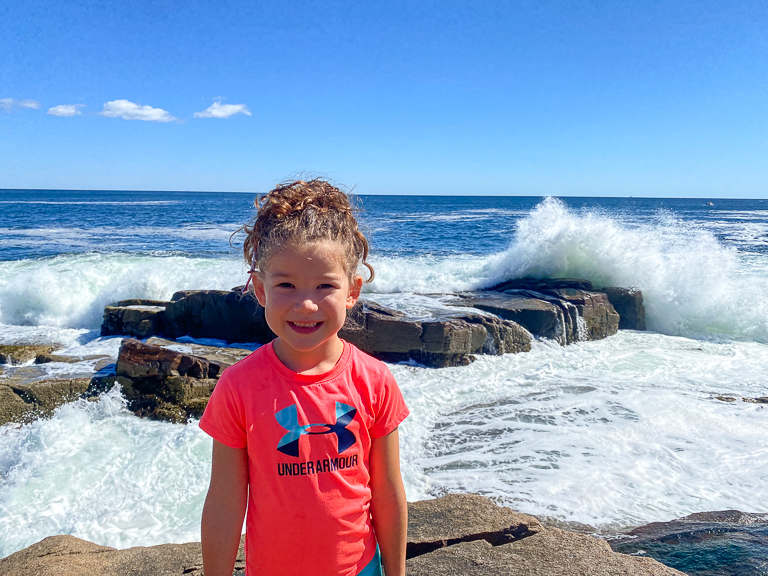 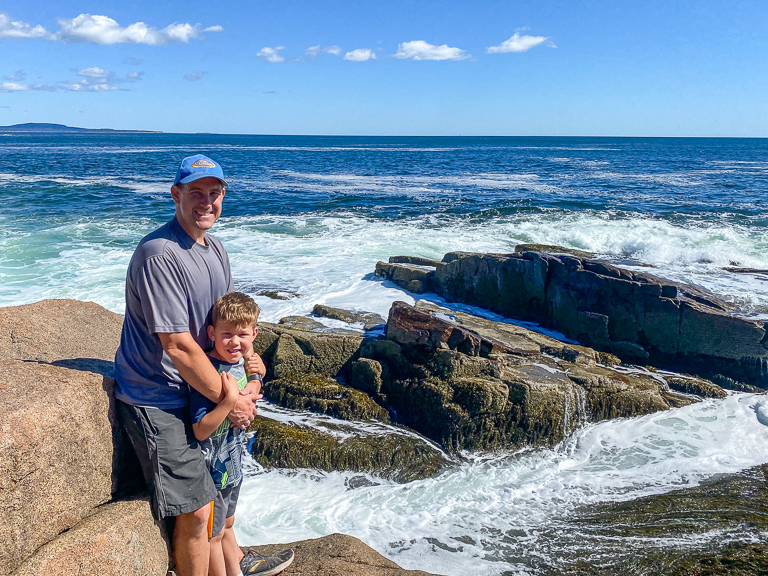 It's been a fun exploring the parks today. 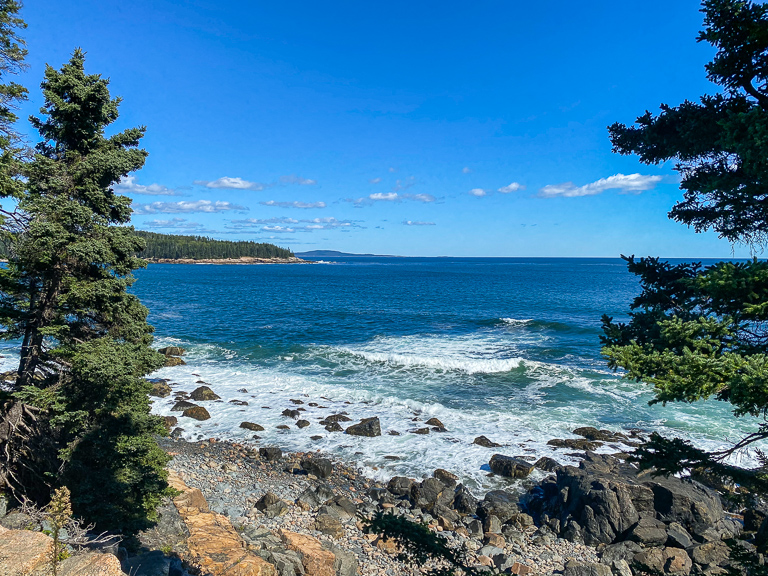 It's 1:30pm and we're headed home to get an early dinner started. Theresa's got some ideas for what we can do after dinner. There's a place we've been trying to see for a little while now, but it's been too crowded. We'll try again tonight! 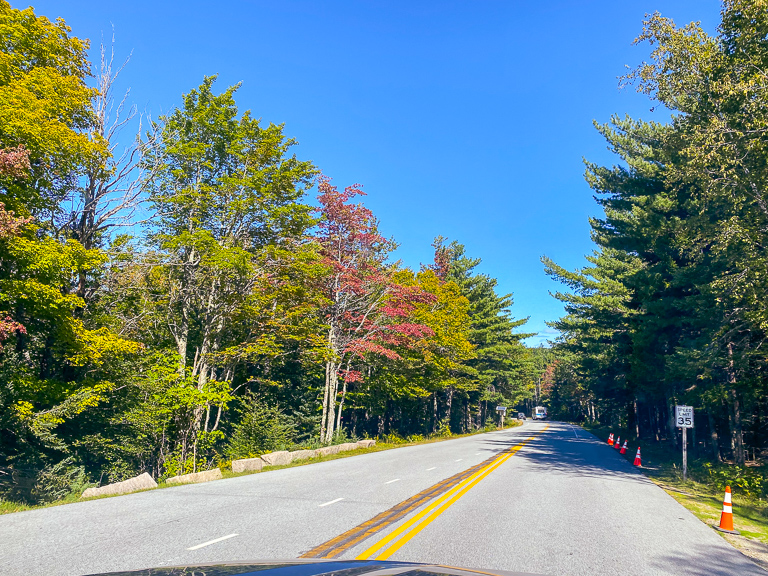