When we go new places, I like to see if there's anything special to the area that we can try out for a taste test. Such was the case for today. Oakhurst Dairy was founded by the Bennett family in 1921. They've been bringing milk to the people of Maine for the last 100 years! 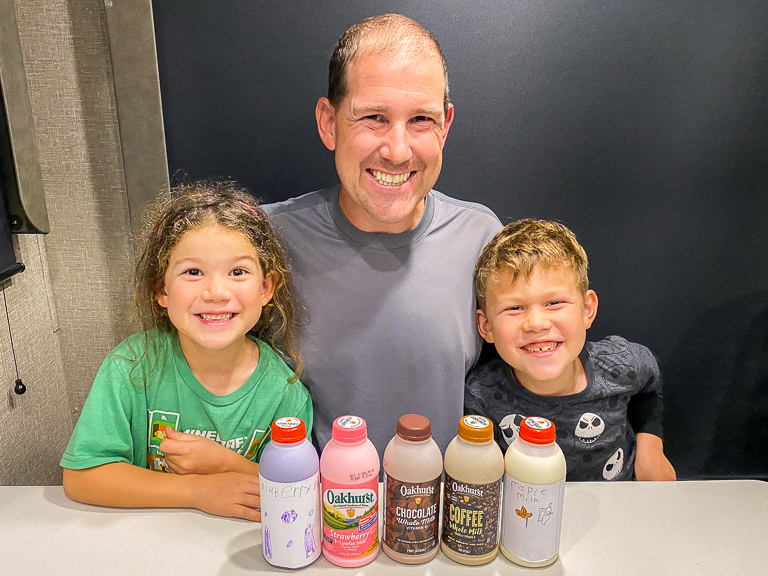 And so today, we're going to try 5 different flavors of milk! 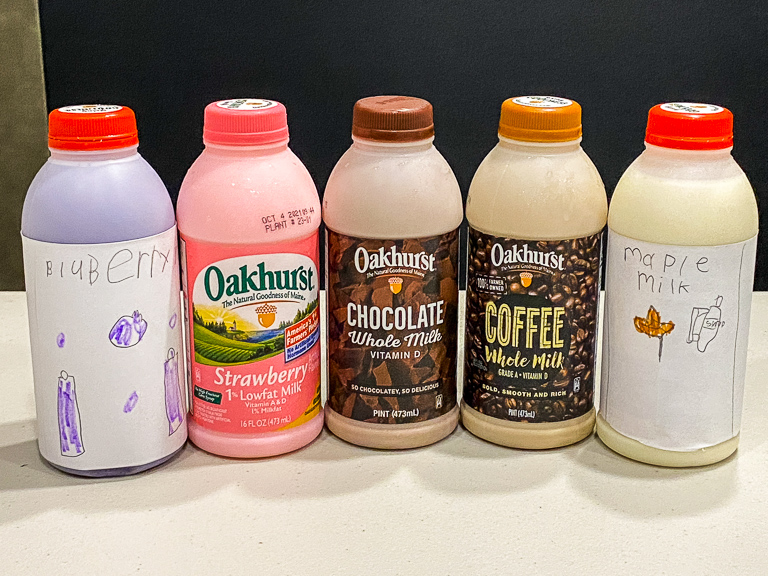 I was looking through their website at their flavored milks and I was very happy with what I was seeing. Maple Milk! That sounds delicious! Blueberry Milk! Awesome! The other three are standard flavors we've seen before, but those first two are unique and I've never heard of them before! 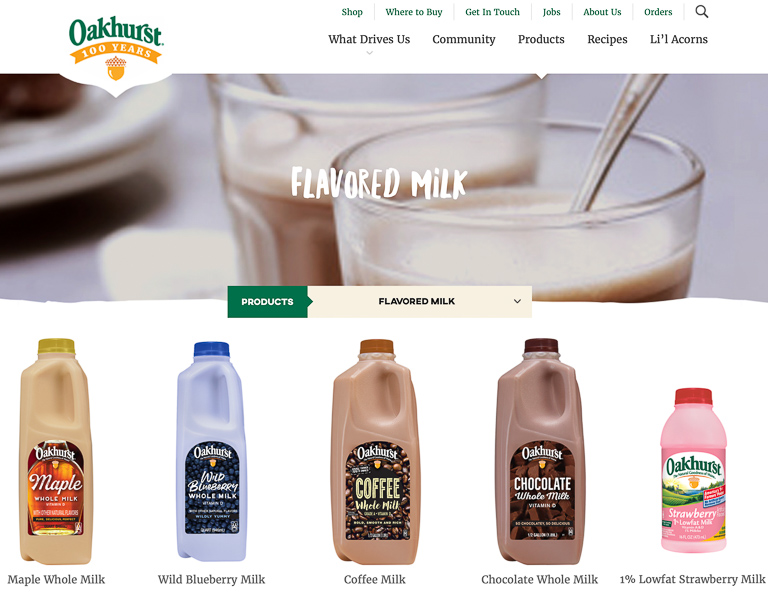 Their website had a product locator and despite opening the search radius to a ridiculous number (90 minute drive for milk) I still couldn't find the Maple Milk anywhere. I might have even contacted the company directly to see if they knew anything about it.
D'oh! It's a seasonal item... That's unfortunate for me.
I also went to three different stores that showed they carried Blueberry Milk, both on the product locator page and in those store's online apps, but the shelves were empty. This is turning out to be a bit of a bust. 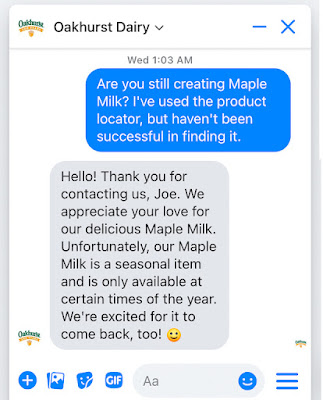 But I have an idea. It won't be the exact same, but I'm sure it will still be tasty.
Hey Kids! Can you help me make some flavored milk? Of course they happily agreed.
The first up is Alli.
I had picked up a couple extra bottles of Oakhurst Whole Milk that we'll use as a base. Theresa made some Blueberry Syrup to go over our pancakes last night, so that will work great for our milk. We spooned quite a bit of syrup into a small container and added milk. 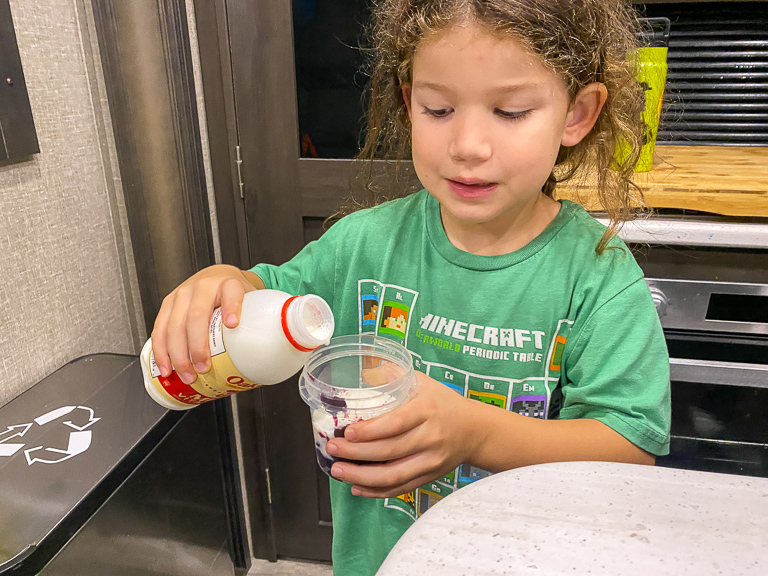 Okay Alli. Give it a good shake! 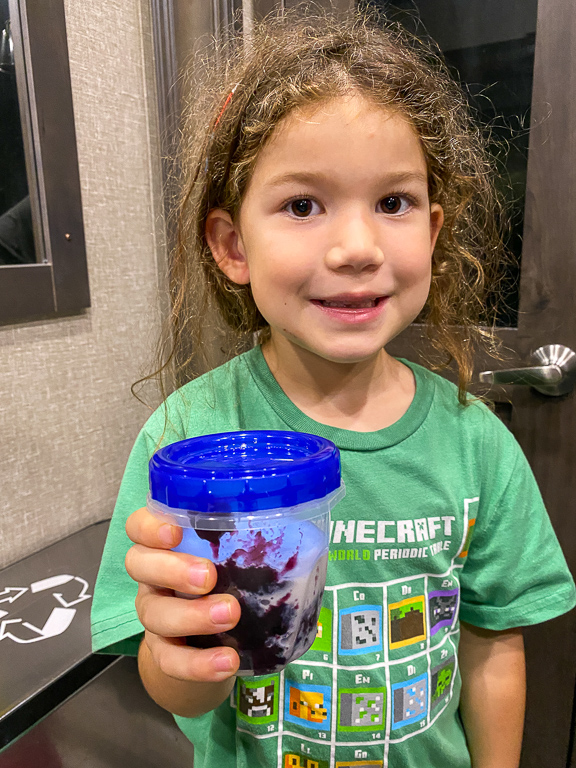 We poured the resulting slurry through a sieve. 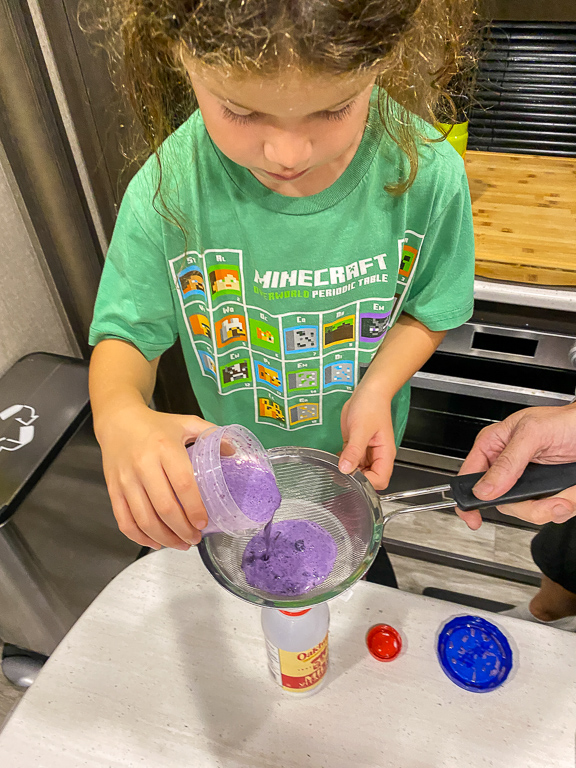 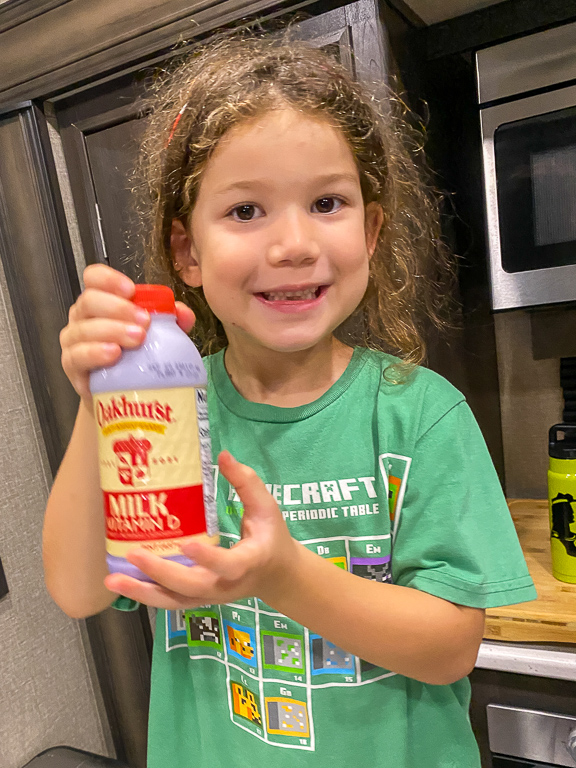 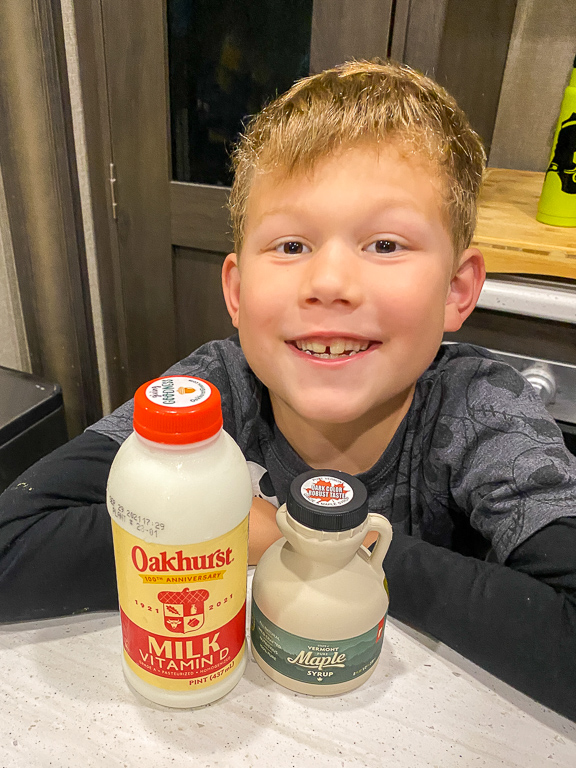 Similar to Alli, he's mixing in Maple Syrup into a cup of milk. 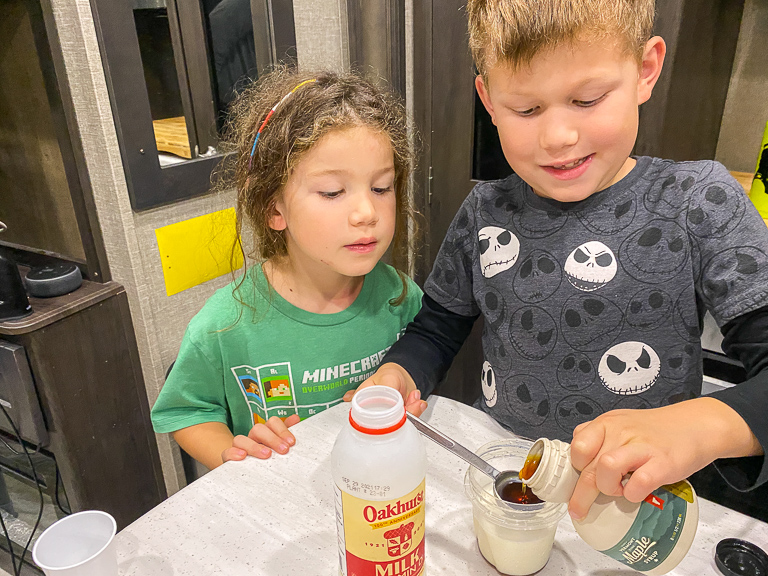 Alli - The syrup is thicker than the milk.
Excellent observation Alli. 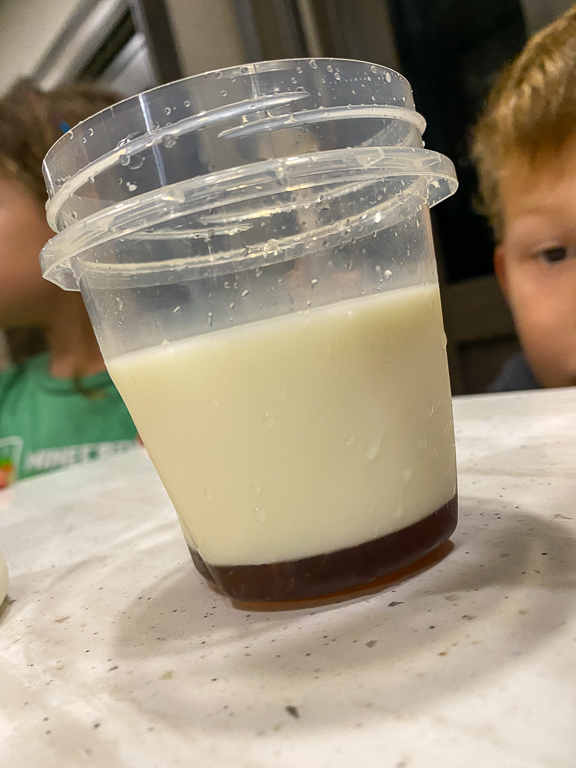 After giving it a good shake, Ian poured it back into the bottle. 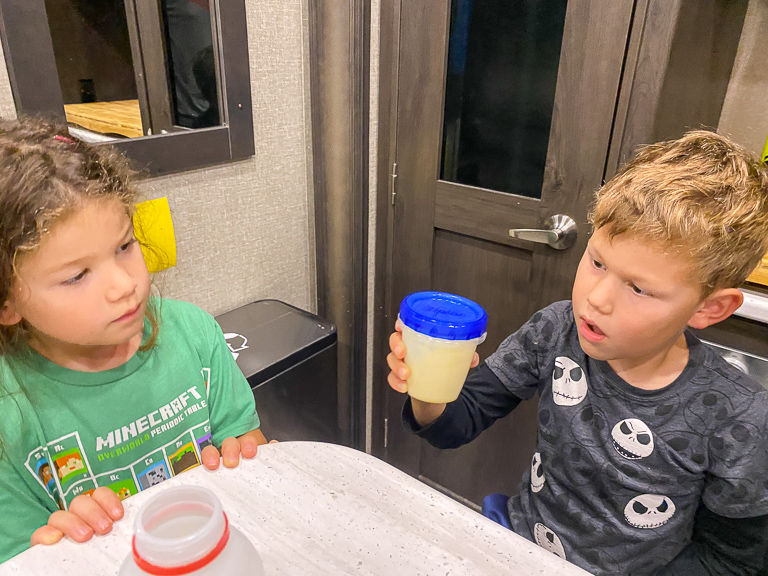 There's just one thing still missing. Labels!
I traced with lines the portion that we'd actually be able to see on the front of the bottle. They made the rest up themselves. Ian even decided to make up his own calorie label for the back, including an ingredient list. 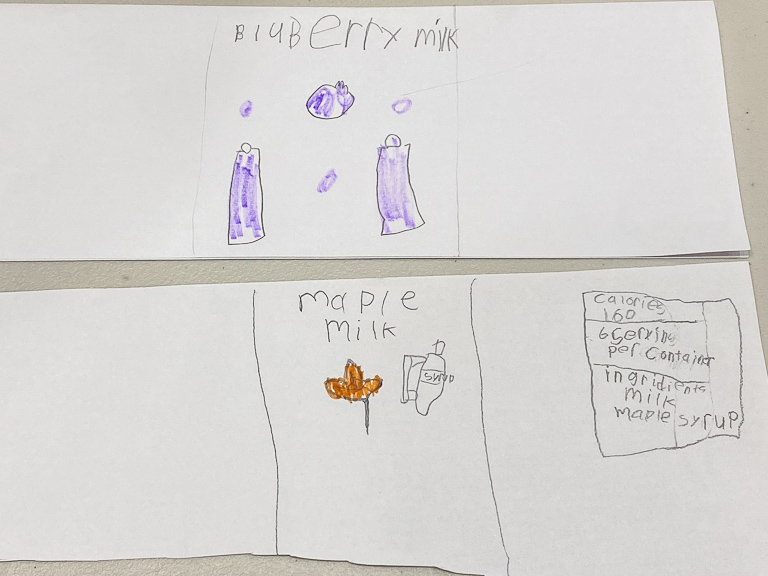 Ooh. This is going to be good! Alli, which one should we start off with? 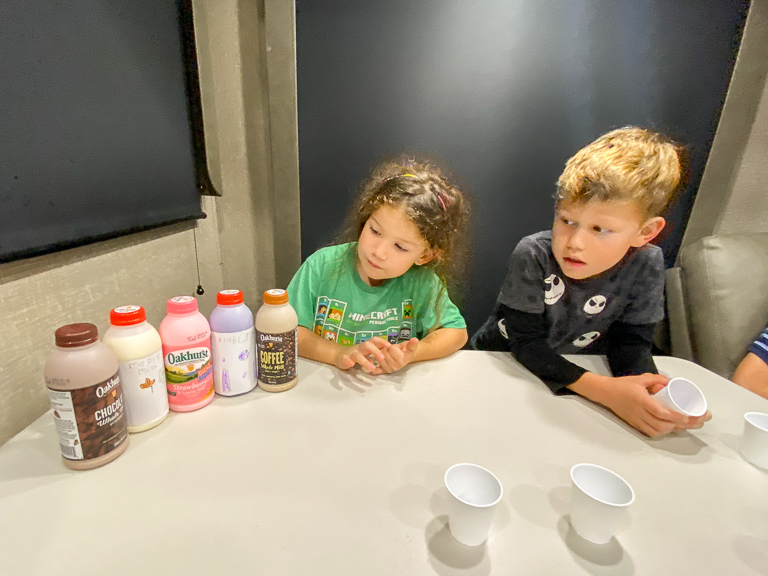 Blueberry it is! What a lovely shade of purple.
Despite using a lot of syrup, the blueberry flavor is subtle. I guess blueberries themselves don't have a particularly strong flavor, so that's to be expected. Still, it was a tasty milk. Thanks Alli! 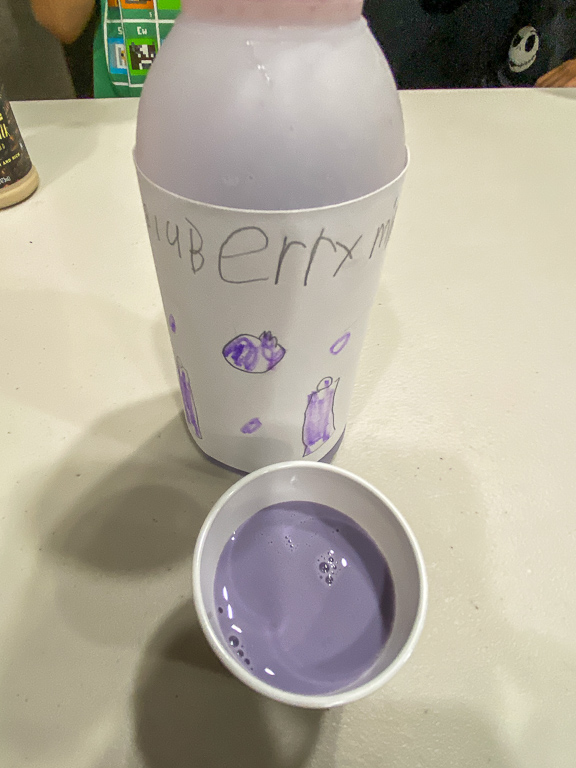 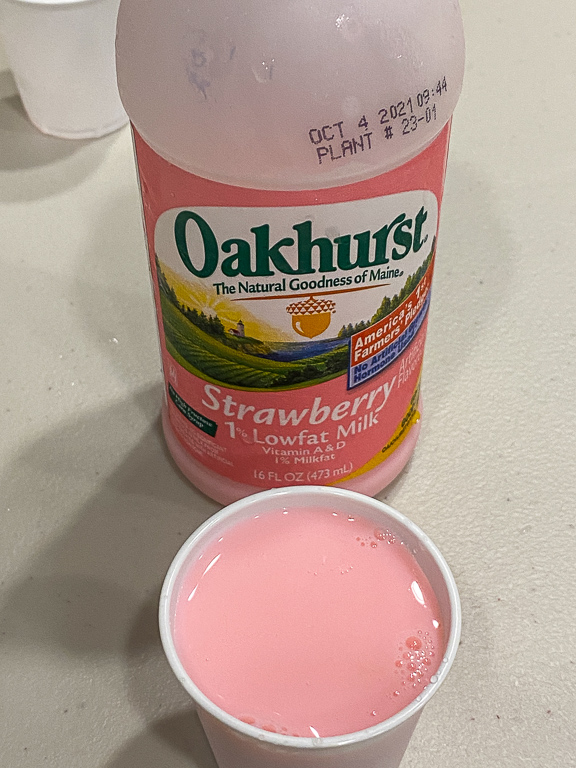 Grandpa picked the next one and he wanted to go for the Oakhurst Chocolate milk. Ian was one of the first to taste it and said that it's a dark chocolate flavor. He's not wrong. This is much less sweet than the chocolate milk we usually have. Richard suggested a Dutch Cocoa flavor. It's pretty delicious too. 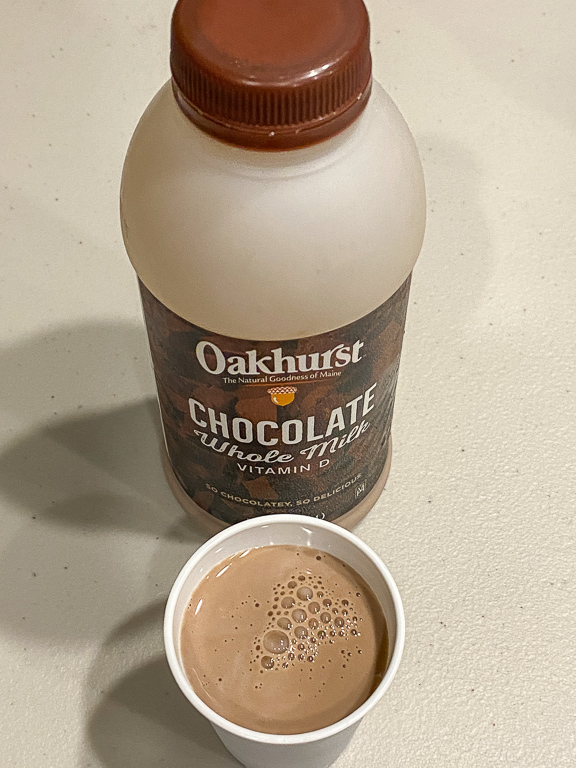 Time for the coffee. While the Coffee milk we tried from Contoocook farms was sweet and creamy, this was a punch of coffee flavor. There's nothing subtle about this one. Richard and Theresa both enjoyed it. 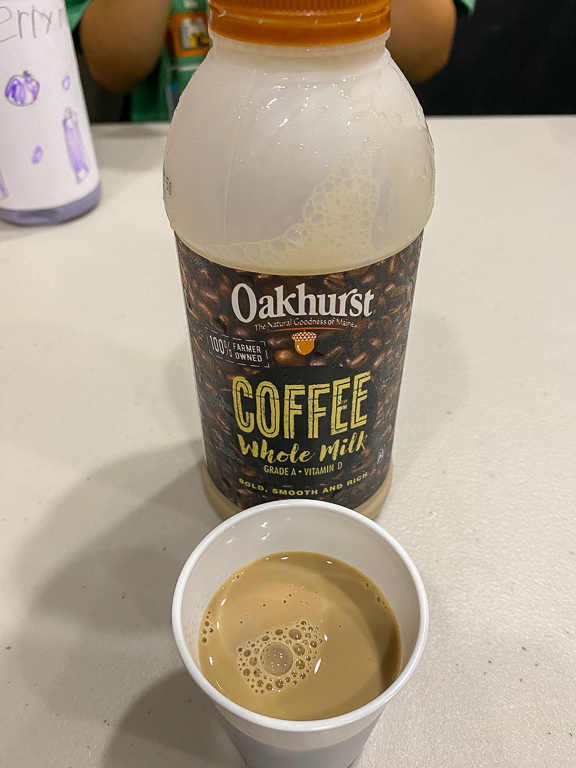 Well that leaves me with the last pick. And it's the one I would have picked anyway. Maple Milk! I know theirs usual colorant to make it a tan color. This one is a subtle tan color.
Mmm. I love having that hint of Maple to go along with the creaminess of whole milk. I would add even more maple syrup to it in the future! 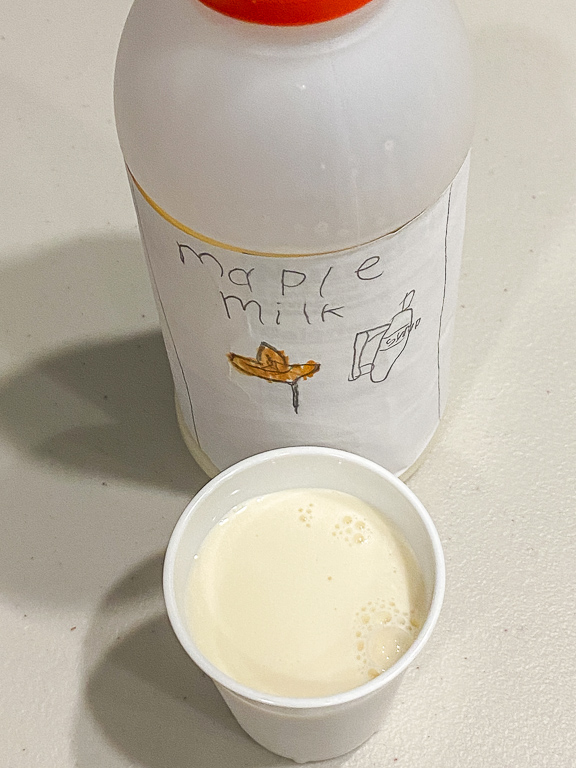 And then we got to the experimentation. What does Strawberry-Blueberry taste like? How is the Coffee-Chocolate combination? All these questions and more had to be answered. The kids do like pouring their own and mixing things up. 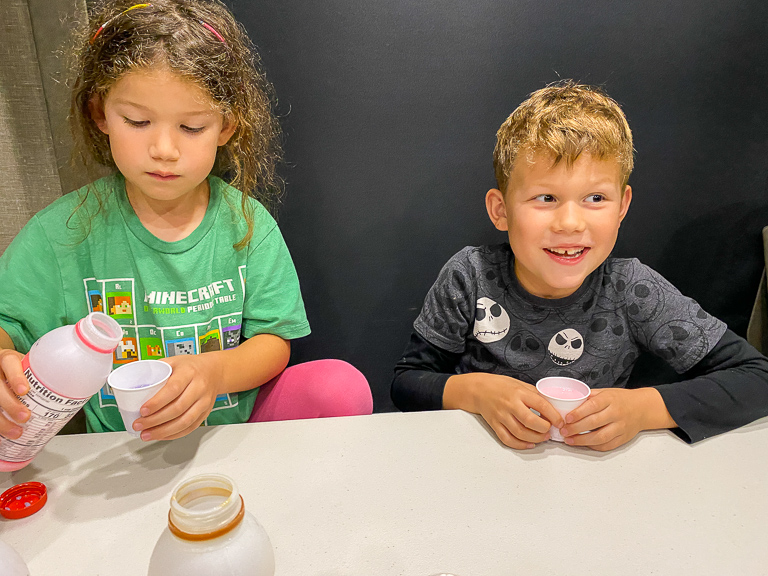 In the end though, which were the favorites?
Strawberry - Alli and Ian. Something about that artificial strawberry flavor that they just love.
Chocolate - Richard likes the dark chocolatey flavor of this one.
Coffee - Theresa. With a strong coffee taste, it was even enough to overpower the chocolate flavor when you mixed the two together.
Maple - Joe. I'm going with the homemade Maple Milk. It's different and I love the maple flavor. 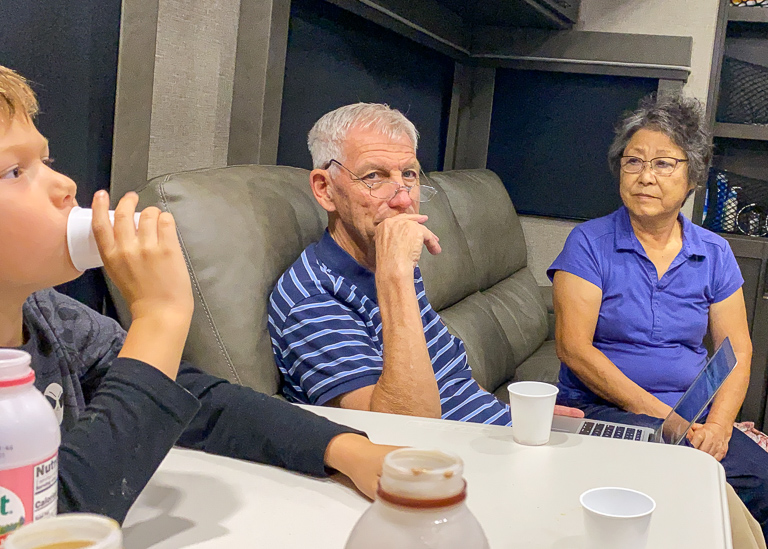 A look at the back labels. Oakhurst Milk comes from Maine cows with no artificial growth hormones. There's no high fructose corn syrup either. It's sugar and water as the sweetener.
This was a fun taste test! Not quite what I had in mind when I started out with it, but it all worked out well in the end! 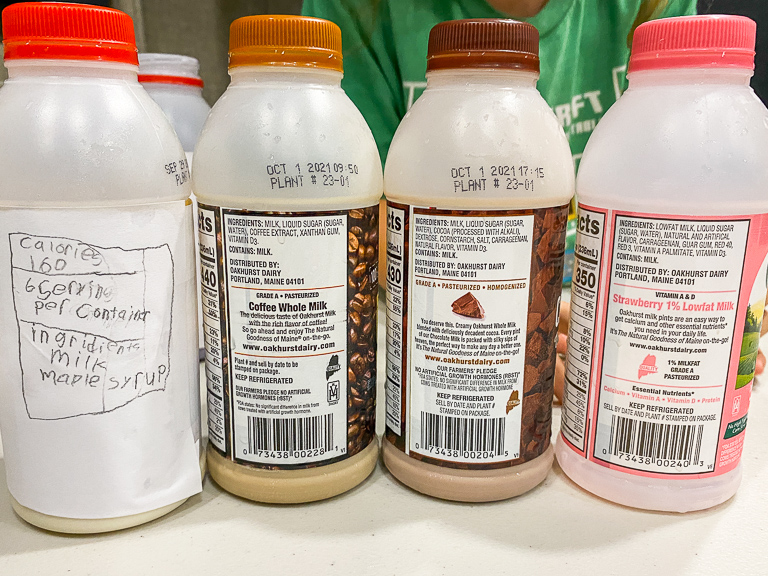