I already did a Pizza Night for Massachusetts, but why not another?

The Fluffernutter sandwich was invented in Melrose Massachusetts in the early 1900s. Peanut Butter and Marshmallow Fluff are a delicious combination, so I bet it'll be good on a pizza too! 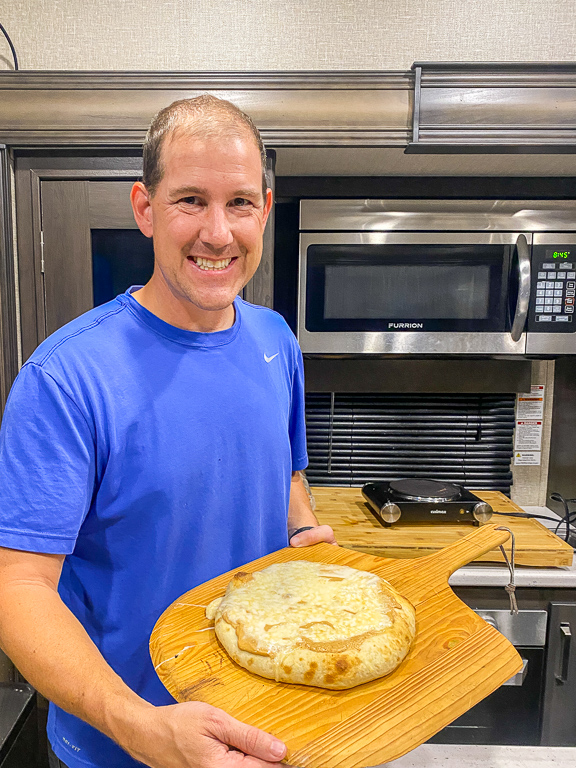 This is a dessert pizza, but I didn't do anything special with the dough. Just my usual recipe for Joe's Favorite Pizza Dough. 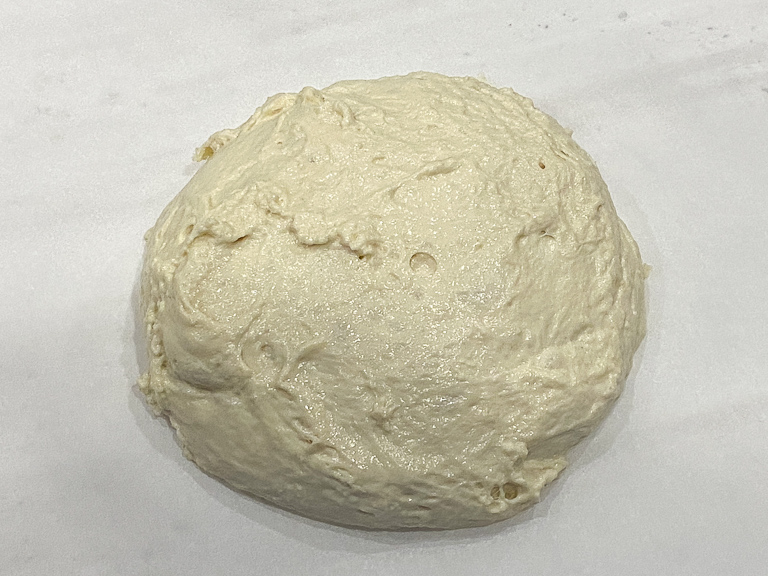 Neither of the toppings needs to cook, so I'll be pre-baking this pizza crust. Today it felt appropriate to brush the crust with butter instead of oil. 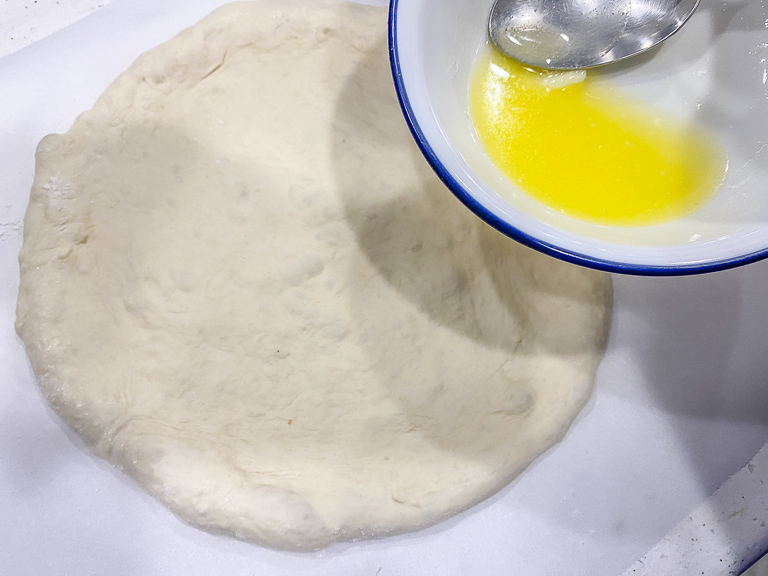 After a few minutes my dough is looking toasty. I tried to press a crust ring into it, but with no toppings it just started to puff up everywhere. 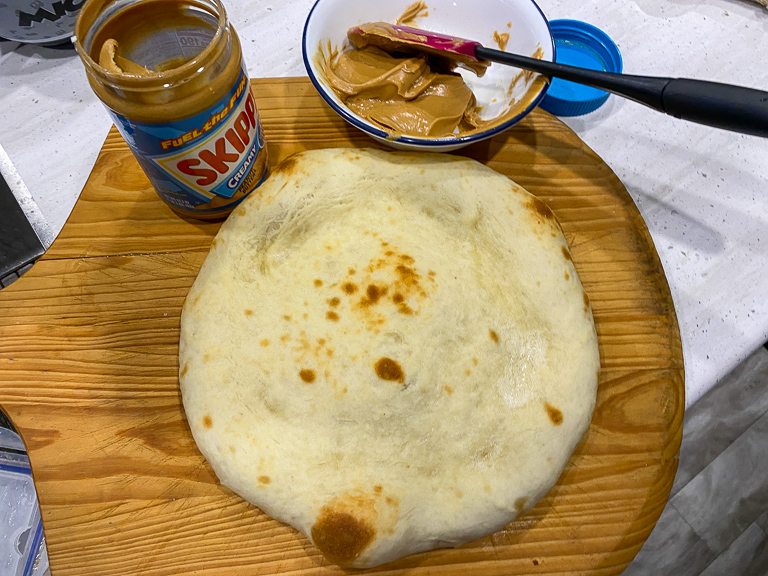 That's going to make it harder for this pool of peanut butter to stay in one place. After placing it on the hot dough it started to turn into a liquid. I tossed it back into the pizza oven for a minute while my marshmallows are finishing on the stovetop. 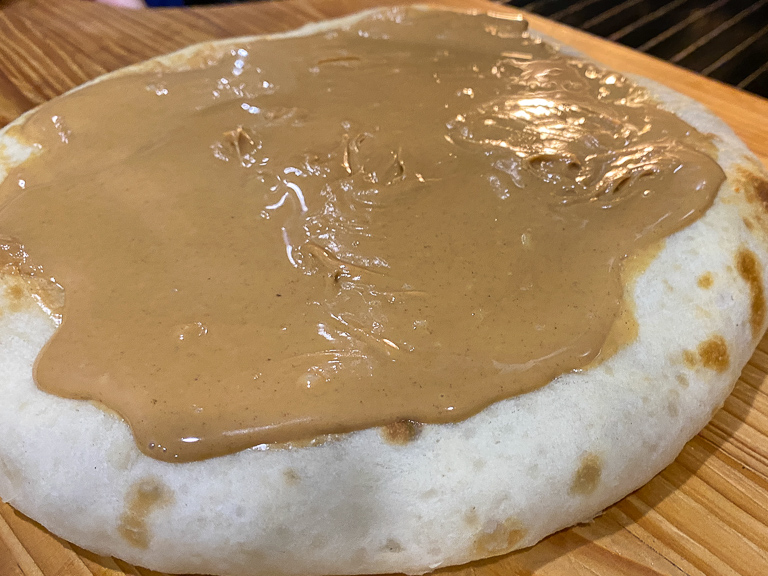 With my marshmallows warmed and liquidized, I'm ready to add it to the top of my peanut butter. 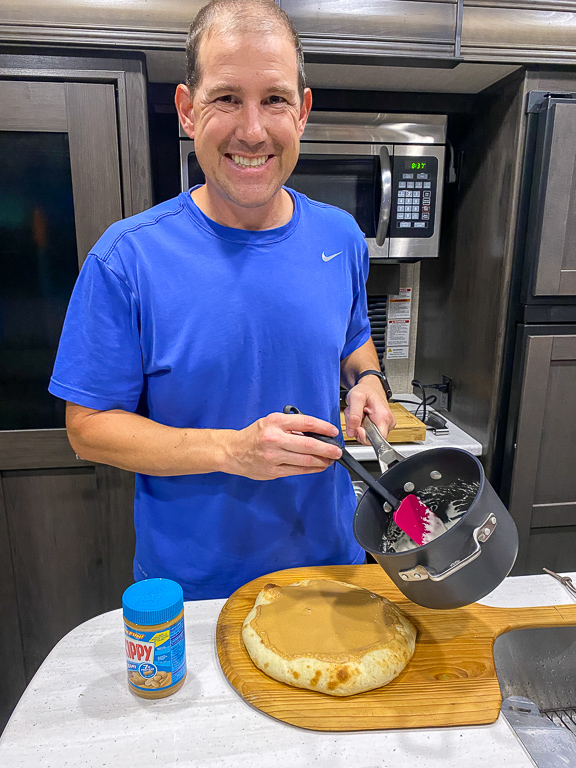 I had thoughts of drizzling the marshmallow on top and then spreading it with a silicone spatula, but soon abandoned that idea. It's way too fluid. That crust barrier would have been nice to keep everything inside. 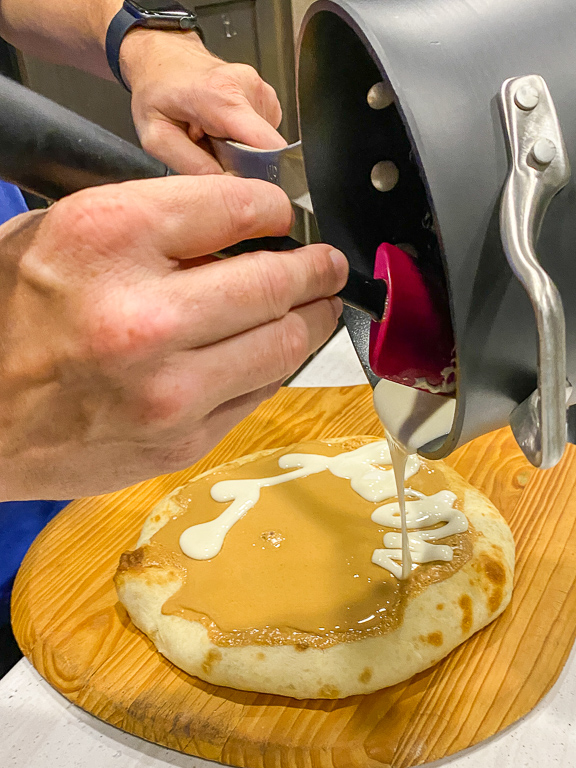 I could have stopped it there, but this needs a little bit of color on top. 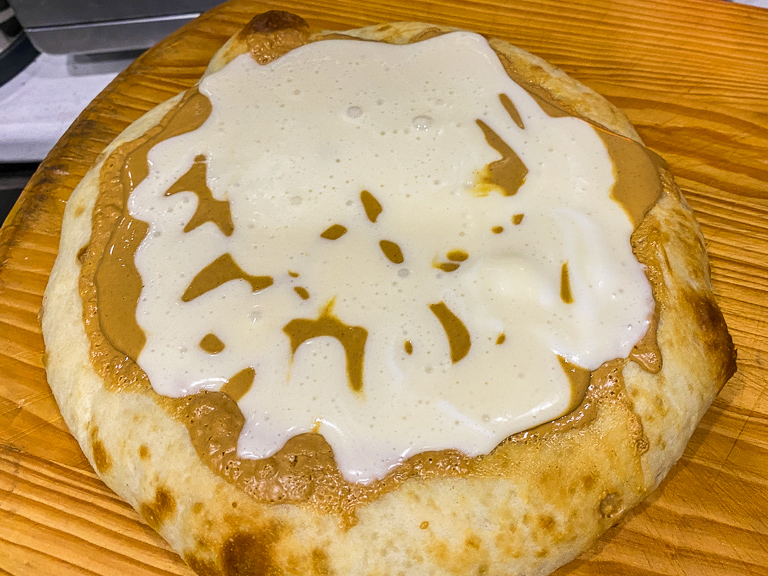 Back into the toaster oven it went. I set my watch for three minutes and then started to clean up. I turned around after 60 seconds and it was already starting to bubble and brown. Yikes! Good thing I had a tray underneath to catch the drippings! 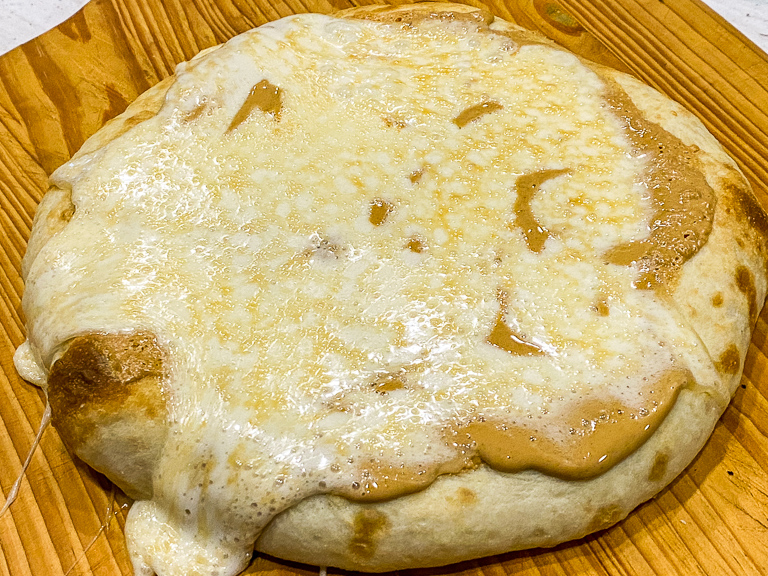 Time to cut it up! Wow, what happens when you mix sticky peanut butter with sticky marshmallow? 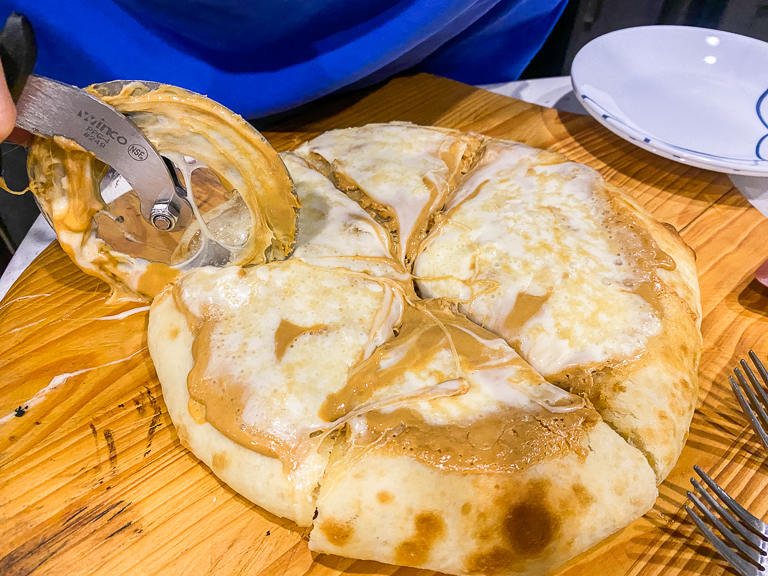 This has to be the messiest pizza I've ever made! 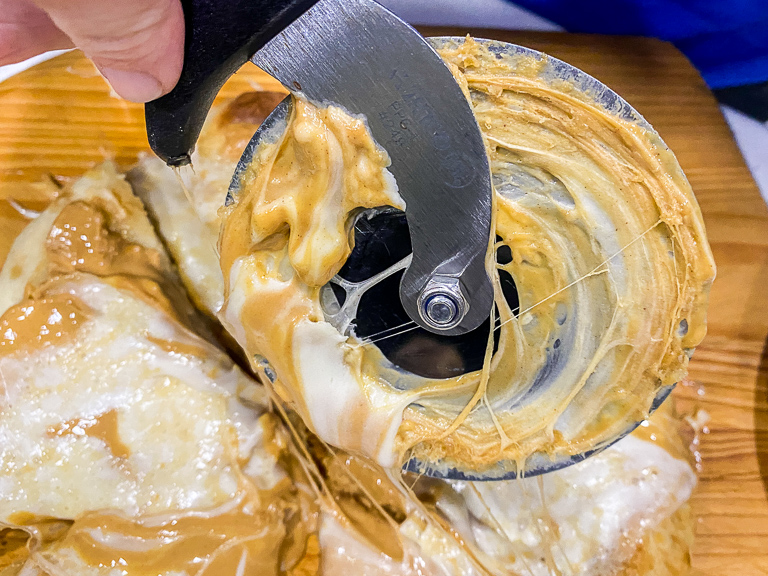 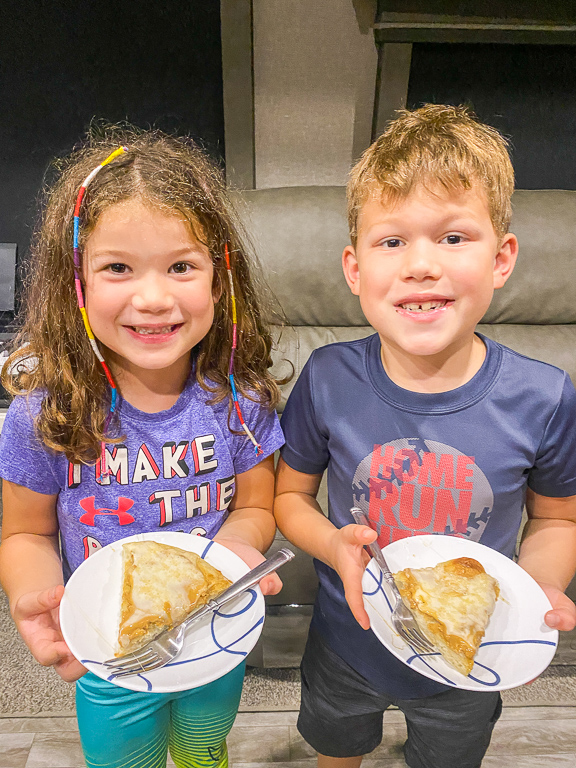 And Theresa?
Theresa - This is the best dessert pizza you've made so far.
It was indeed delicious! Salty peanut butter and sweet marshmallow make a great combination! 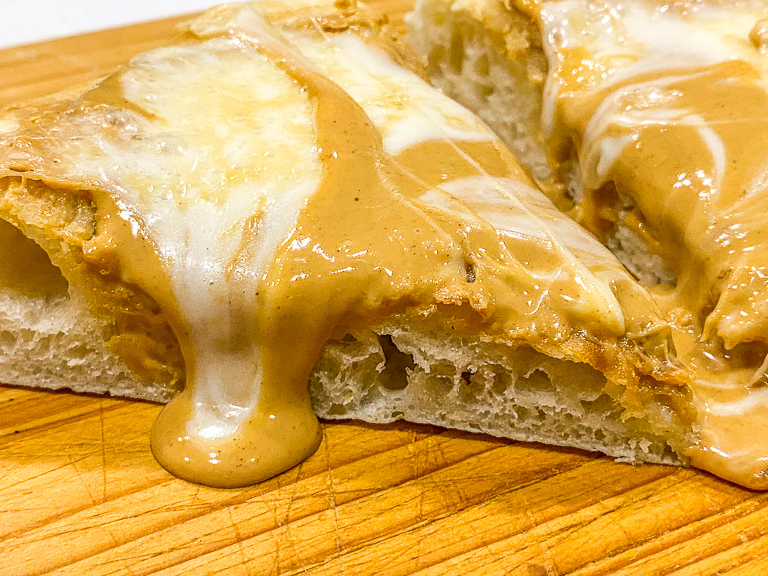 And that extra gooey marshmallow and peanut butter that's left over can be used on other things too. 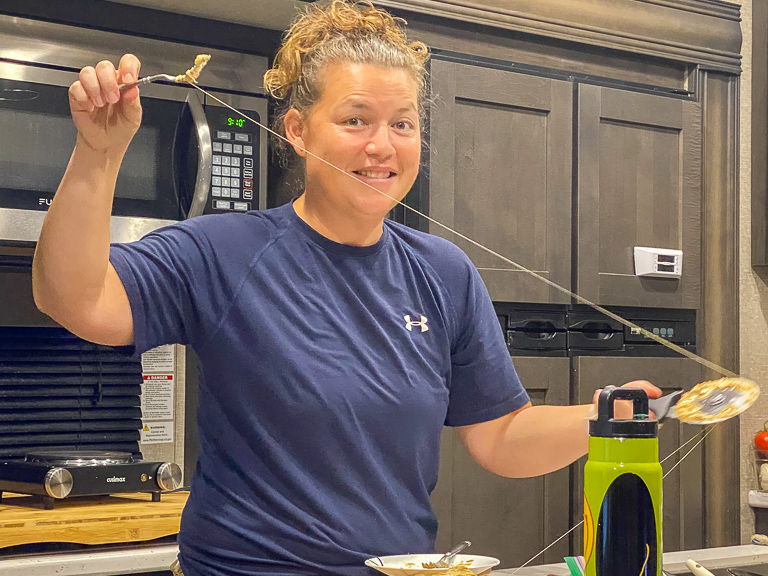 Like apples! This was a good pizza to make for Massachusetts! 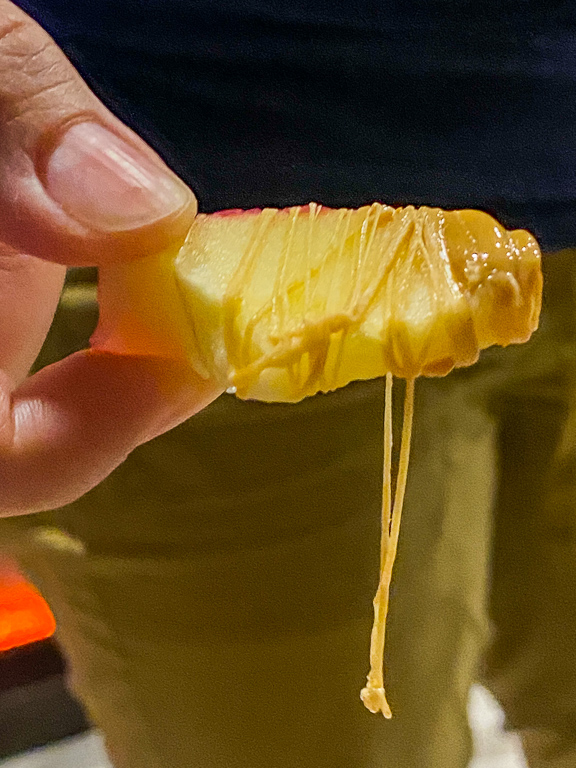