If we're going to hit our goal of 500 biking miles in one year, some of the rides we do are going to have to be long ones. Back when we were in California, it was easy enough to go out on the weekends and ride through the neighborhoods to get some miles. Being on the road, finding those long stretches of open road or trails has been a little more difficult.

When Theresa found the Londonderry Rail Trail online, it looked like the perfect opportunity to make up a few of our lost miles.

The Rails to Trail initiative is trying to take old abandoned railway trails and redevelop them into biking and walking trails. They're even trying to connect the Pacific Coast to the Atlantic Coast with the Great American Rail Trail! 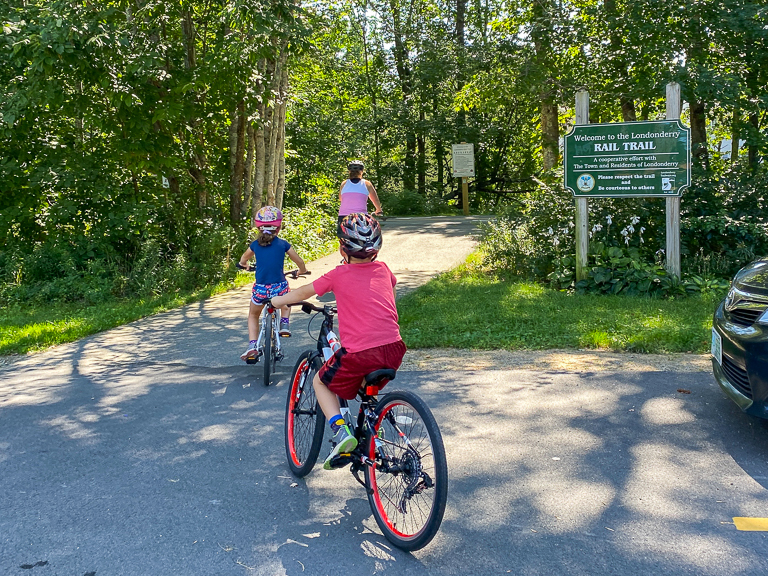 The kids were excited to get some miles in. I'm glad they like to get out, explore and exercise along with us. They're not complainers at all.
It's starting to get closer to Fall Foliage season here in New Hampshire. Some of the trees are thinking about changing.
Depending on how observant you are, you might notice that Ian is now sporting a new bike. That also means that Alli is trading her single-speed kids bike up to Ian's old bike that's lighter and has 8 different gears! 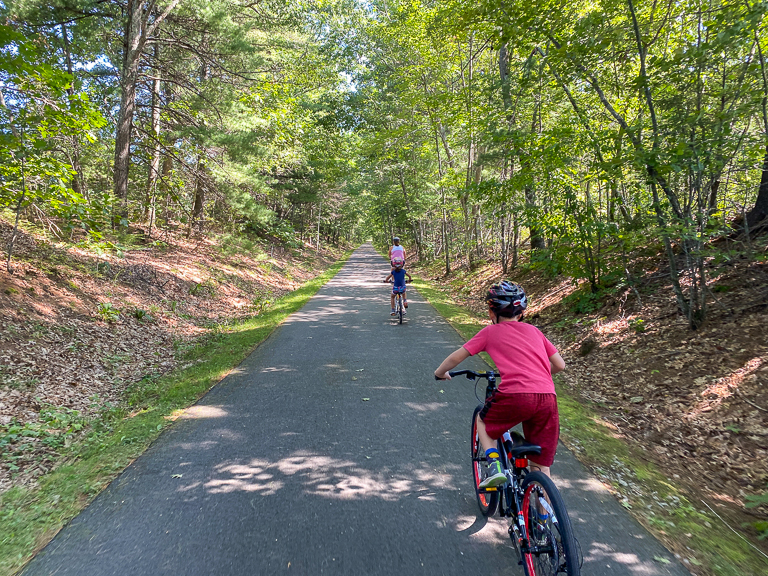 From end to end, it's a 4.5 mile trail. If you do the entire ride, it's 9 miles start to finish. And the best part is that it's all paved! There's no steep grades (because it was an old train rail) and even the road crossings were easy. The drivers we encountered were all polite and stopped for us as soon as they saw us waiting at the crosswalk. 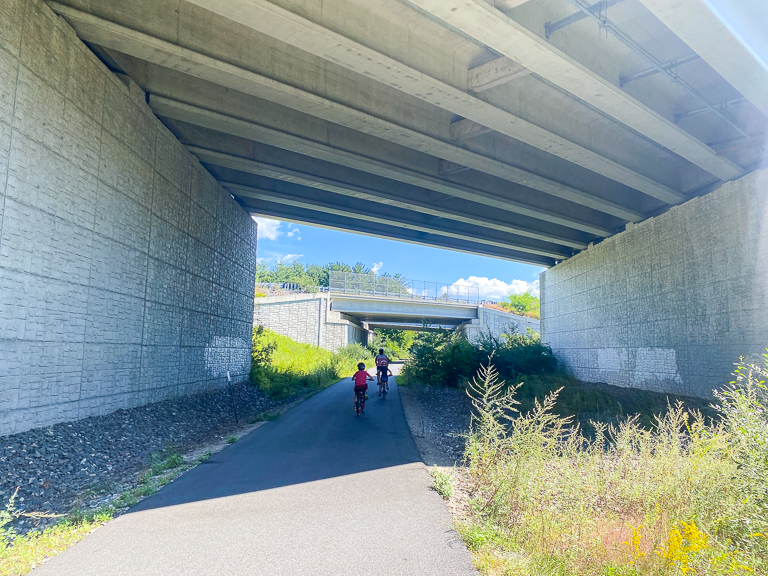 It was the perfect day for a ride. Beautiful blue skies, temperatures that weren't too hot, and gorgeous scenery to ride beside. 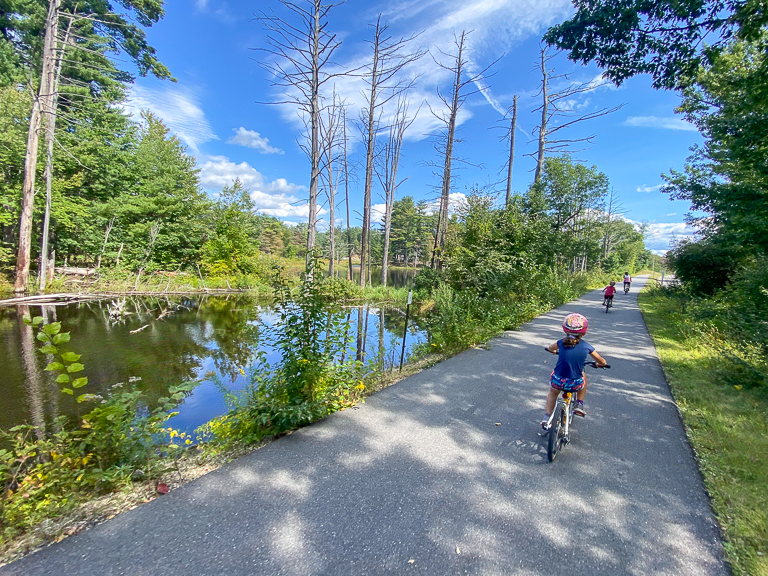 And some of the trees decided to start changing early. 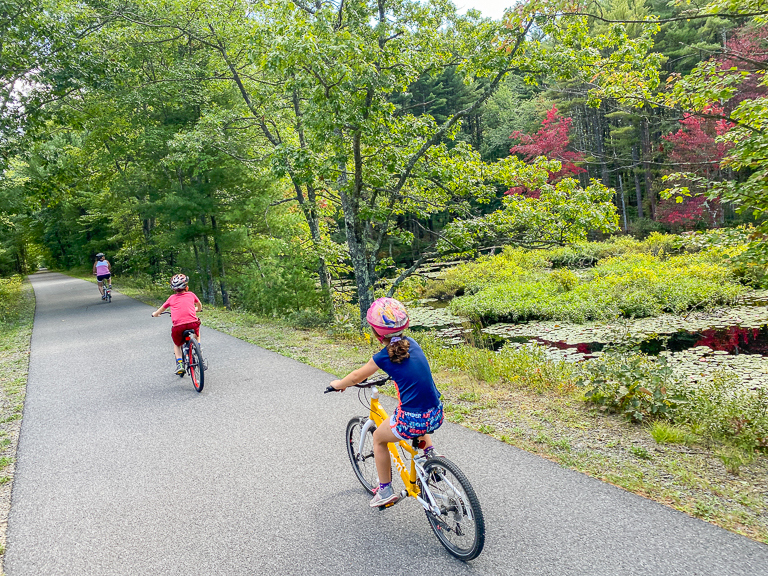 The water was calm enough to get a reflection of the fiery red tree in the background. 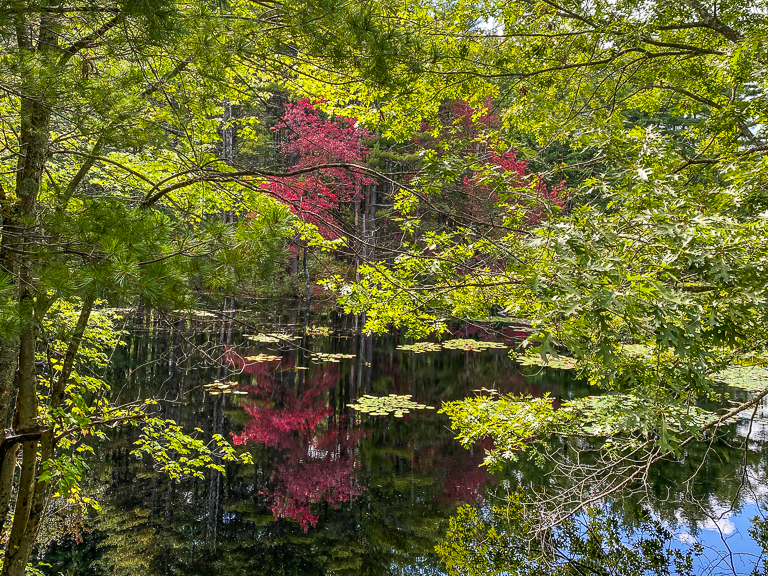 There were lots of places this trail went beside water, and the trees nearby seemed to be changing early. 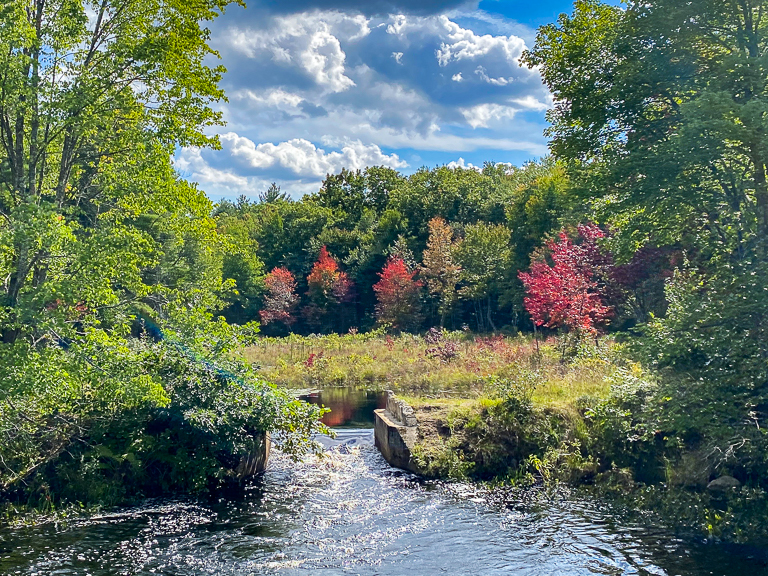 This one pond had the most lily pads I've ever seen! 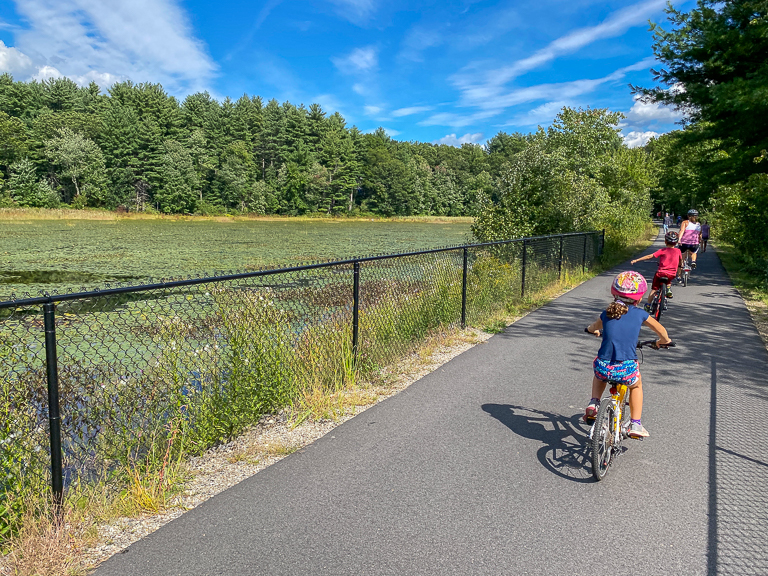 Despite carrying all the water and snacks along with us, it was still nice to be able to stop back by the truck whenever we wanted to take a break for a few minutes, sit down, and have something to eat.
After the first 9 miles, the kids were doing great. They were ready to go another 9 no problem. These kids are powered by Goldfish and Cheez-its. 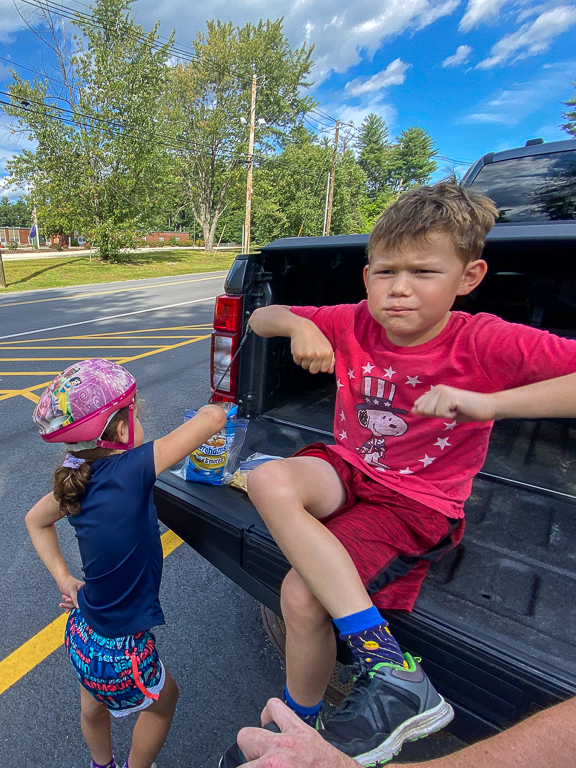 The next 9 miles were just as good as the first. We started talking about how far we wanted to go today. Our previous record was 13.3 miles just a couple weeks ago. That was when Alli was on her old bike, but today she's flying!
Theresa and I had thought she was a little slow when we went out riding, but now we realize that it wasn't her.
Alli - Sometimes it's not the person. Sometimes it's the bike!
You're totally right Alli. Sorry about that.
Anyway, I had mentioned that the longest I had ever ridden before this was something like 20 miles when I was in my teens. The kids said they could totally beat that.
After we stopped at the truck after our second "lap" during Mile 18, I'd mentioned that we'd done a half marathon, but not a full marathon. Ian immediately said he wanted to do a full marathon, and after promising Alli we'd take as many stops as she needed, convinced her to go a full 26.2 miles also. That's our new goal today! 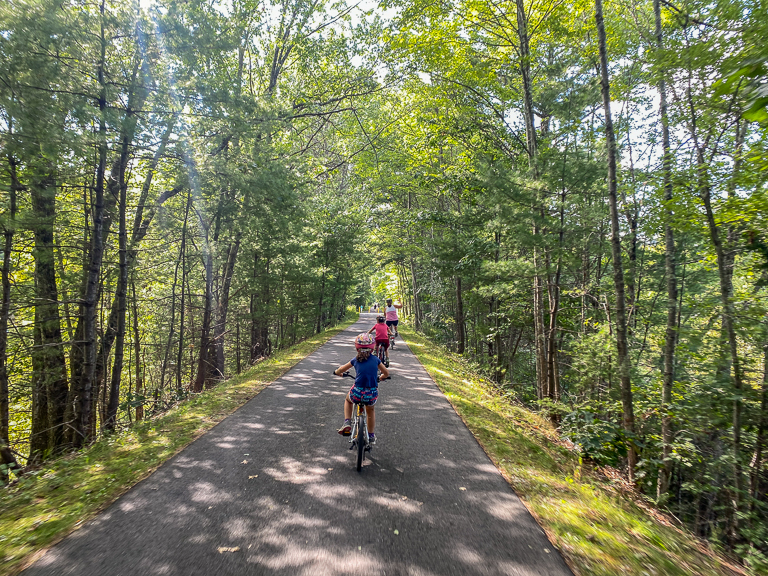 And 8 miles later, the kids have done it! We pulled off the trail, back at our parking lot. 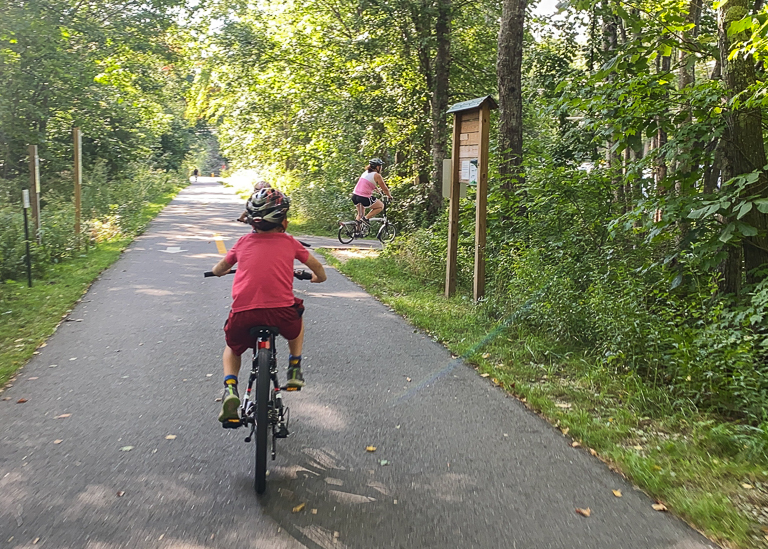 We waved to everyone we saw along the pathway and got a lot of smiles. After we made the 26.2 miles Ian started singing "We are the Champions!".
Theresa's been keeping track of our mileage, and wow! 26.63 miles! That's incredible! 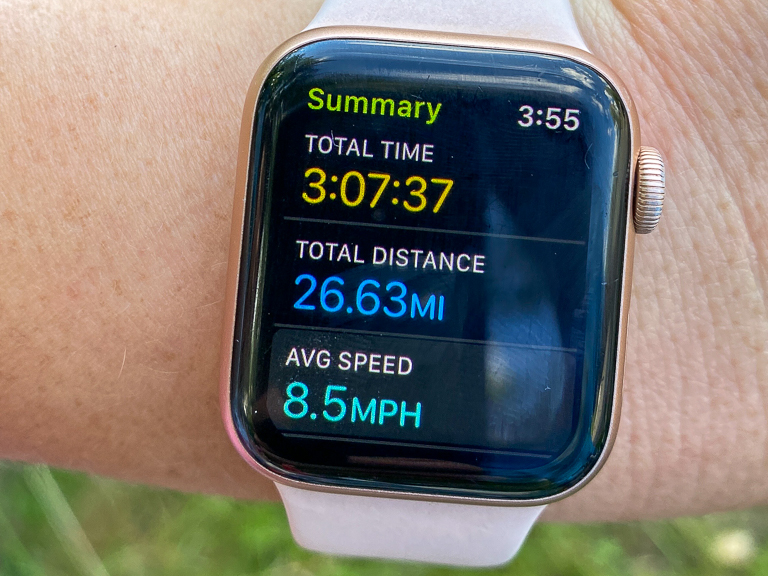 Ian! Alli! You two are amazing! I would have never thought that you'd be doing that many miles on your bikes! With good attitudes and smiles, today's ride was great! 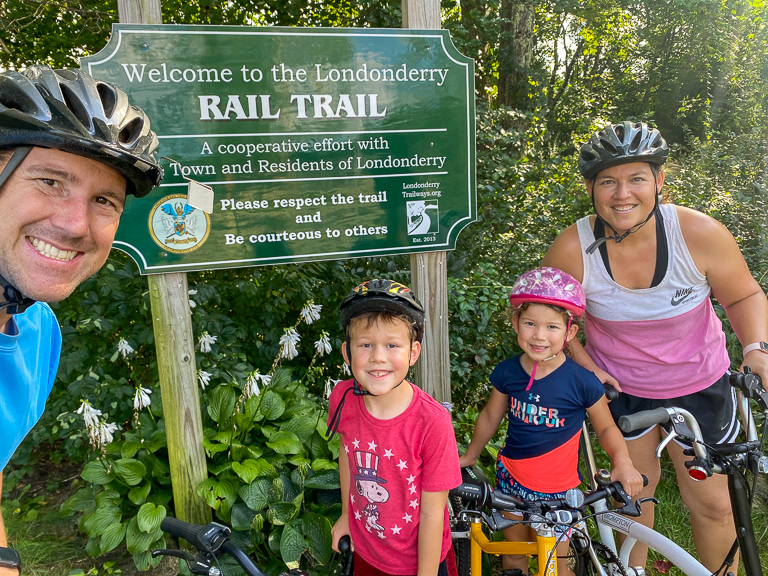 Back at the RV, for dinner, I made homemade Greek gyros for the first time in the RV. It's one of Alli's favorite meals and she's was very excited to have it. Theresa has figured out a good substitution to trying to make homemade garlic sauce, so we're going to be doing this a lot more often going forward. Previously the recipe she was using called for 4 cups of chilled oil, drizzled in super slowly, and half the time the emulsion would break. Now we're using light mayo as a base, adding in fresh garlic, salt, and lemon juice, and mixing that together. It's not exact, but it's really good.
Alli, that's a very colorful plate!
Ian - Sandy Beach - My favorite part was doing a marathon bike ride. Me and Alli jumped of a swing! I tried to do a flip off a swing. It is fun.
Alli - Sandy bech - We went on a 26.2 miyl bik ried. We went to the ice cream farm. I lend to jumpt owt ov a swig. 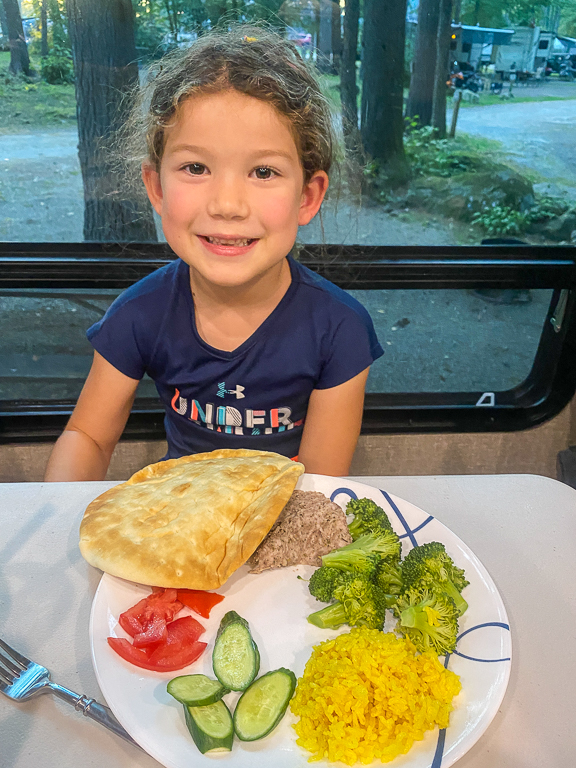