Another travel day, but this one wasn't so fun. Normally we are traveling on a Tuesday. The roads aren't too busy. The camping sites aren't busy. I don't have to worry about moving the RV around so much. But this is a holiday weekend and we're driving on a Friday. Well let's get moving.

It's time to finally leave Pennsylvania and start heading north to hunt for Fall Foliage leaves as they change colors. Let's go to New York! 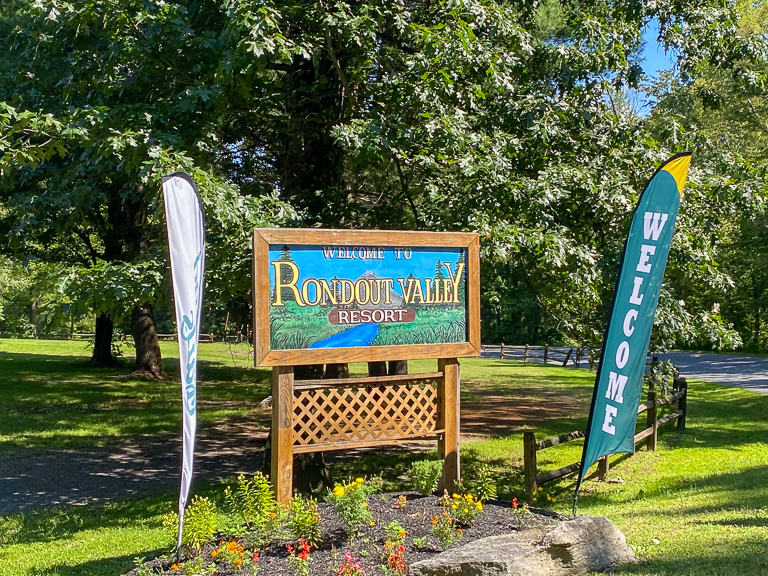 Here's the map with all the places we've visited so far. Time is funny. In some ways it seems like we just started this trip. But when I think back on all the things we've done already, it seems like we've been at it for a while!
Today's drive will be about 4 hours on the road. 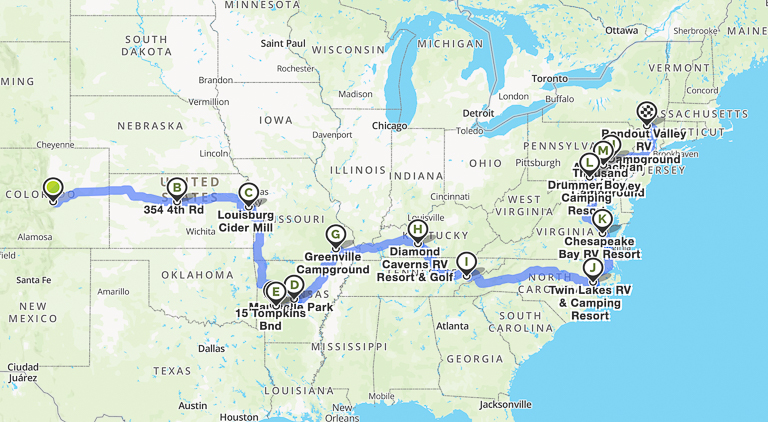 Tunnels are always interesting. This one is going underneath a large hill. I guess it was easier to go underneath it than around it. 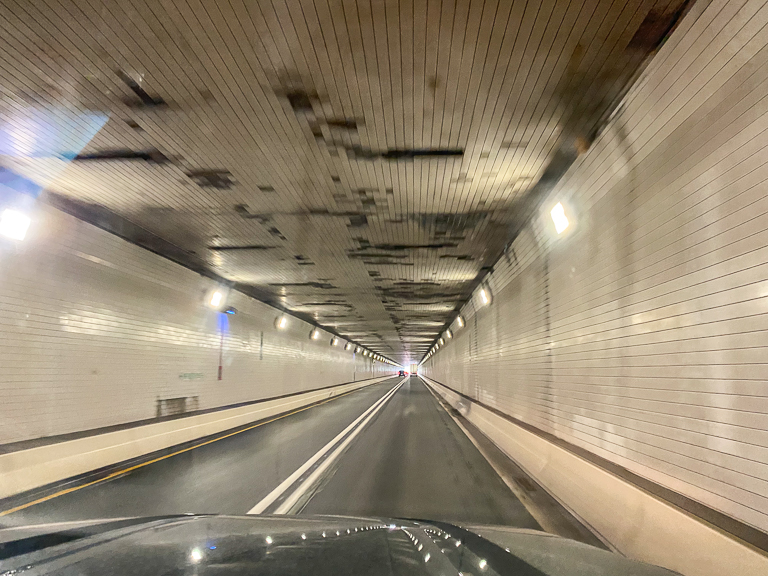 Our exit was right before the Welcome to New York sign, but Theresa managed to get something. 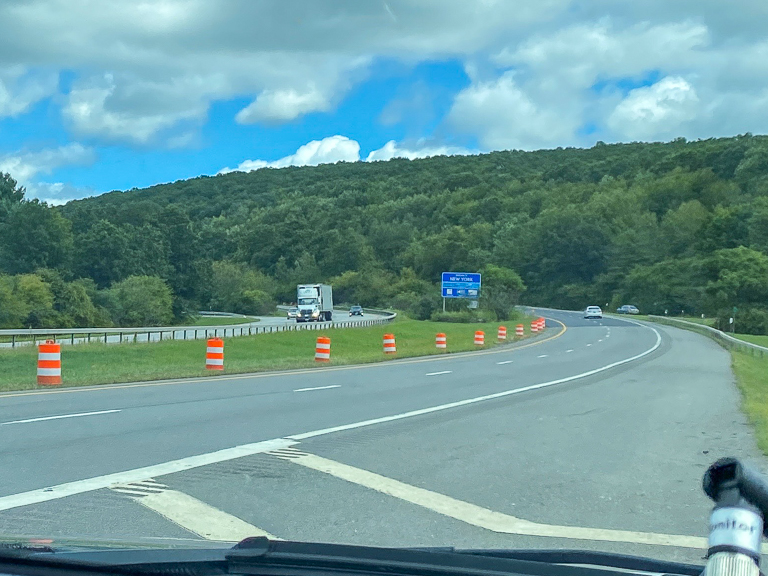 And some people have even parked on the exit, hopped a barrier, and walked through the grass to get a photo near the I Love NY display. 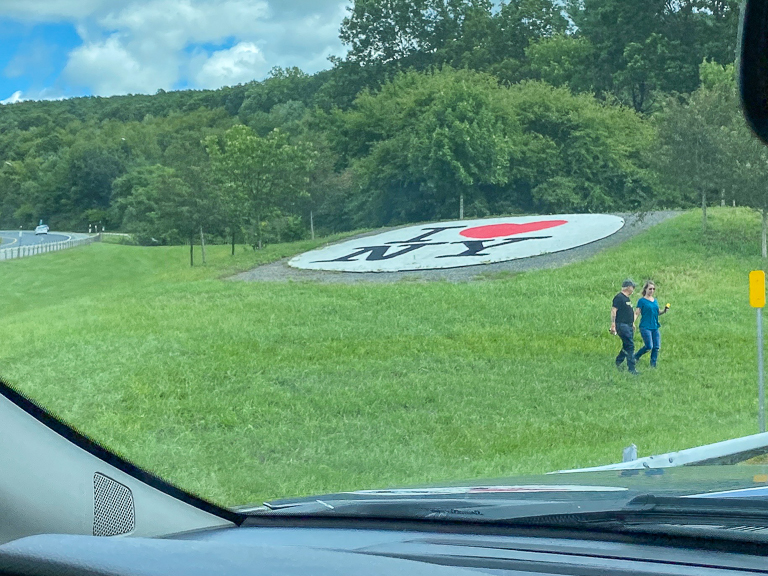 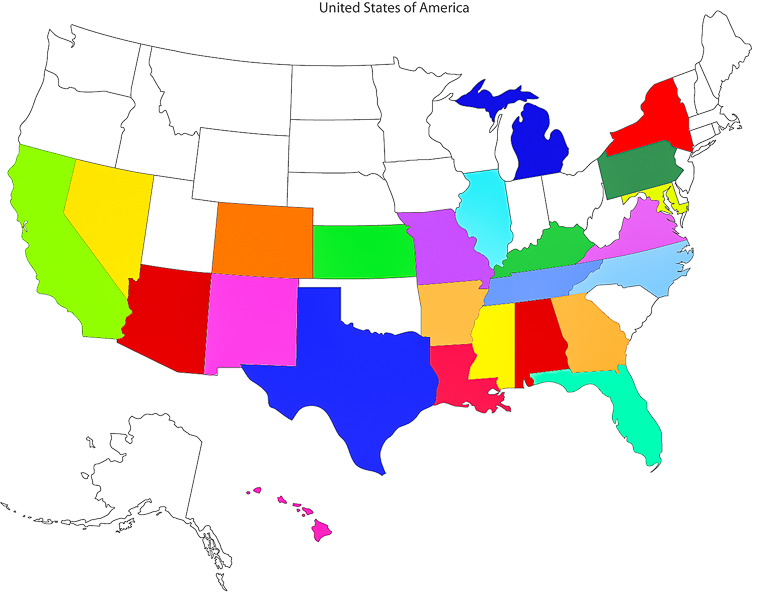 Made it! I pulled the RV off to the side while Theresa went to the office to get us checked in. It's busy here. There's 310 sites and almost all of them are taken for the holiday weekend. You can pick your own site, but the front office has an idea of which ones are free. They suggested a particular spot along the main row. I pulled the RV across the 1 lane bridge and slowly drove to that spot. 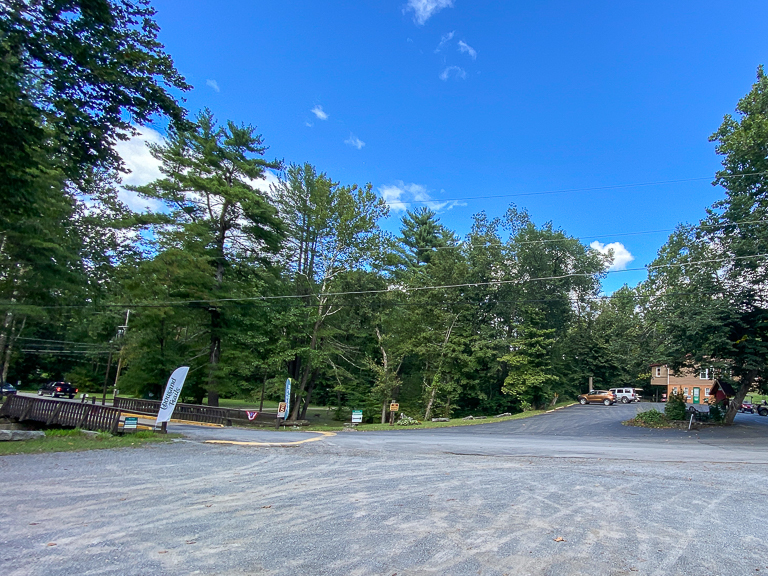 When we got there, it was already taken. Grr.
Theresa called the main office and they suggested looping around and taking another spot, though one that doesn't have full hookups. Theresa asked if Buffalo Pass would be a good place to turn around and got the go ahead.
Now looking at the map, you might think that Buffalo Pass is all good. Just drive the RV over and turn around. The google satellite shows a different picture. Lots and lots of trees. Lovely. 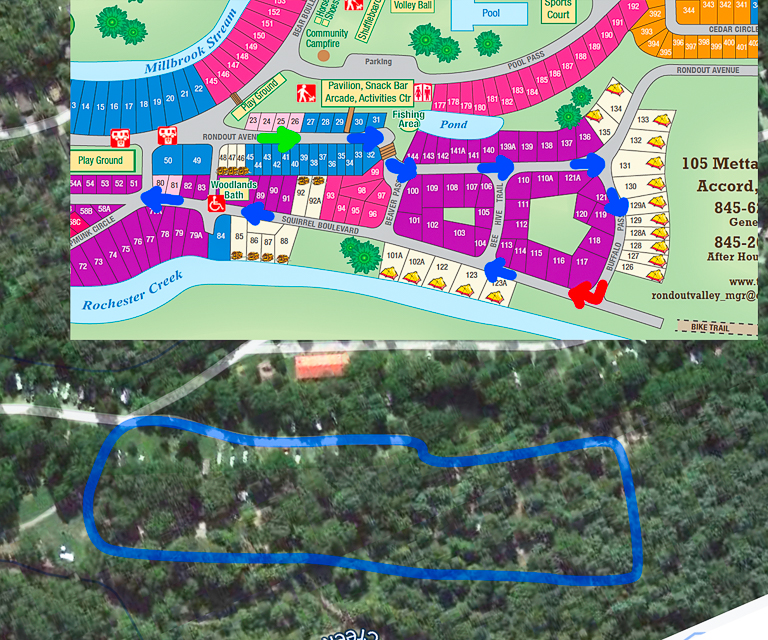 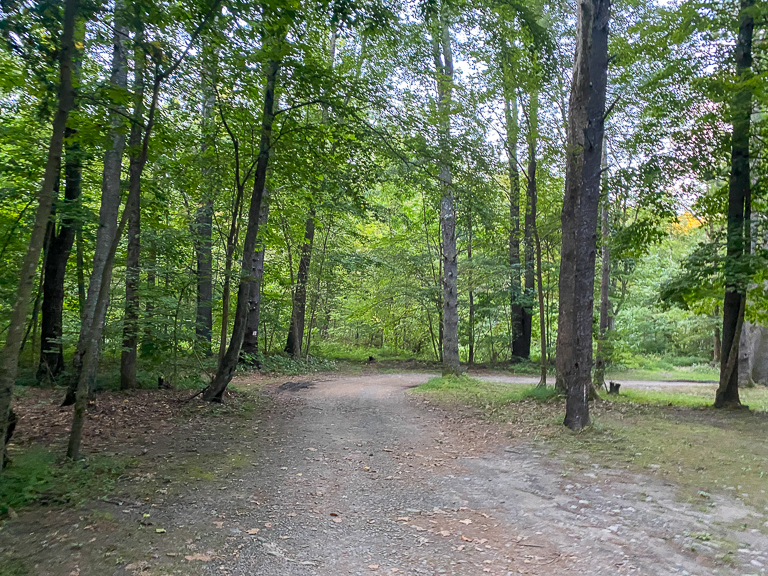 If I was a foot shorter, I think I would have made it. When I started the turn, the tail end of the RV started to pivot and found the tree trunk. Looks like it caught the slide topper awning over the kids' bedroom. Well that's another thing I've got to add to the list of things to fix. 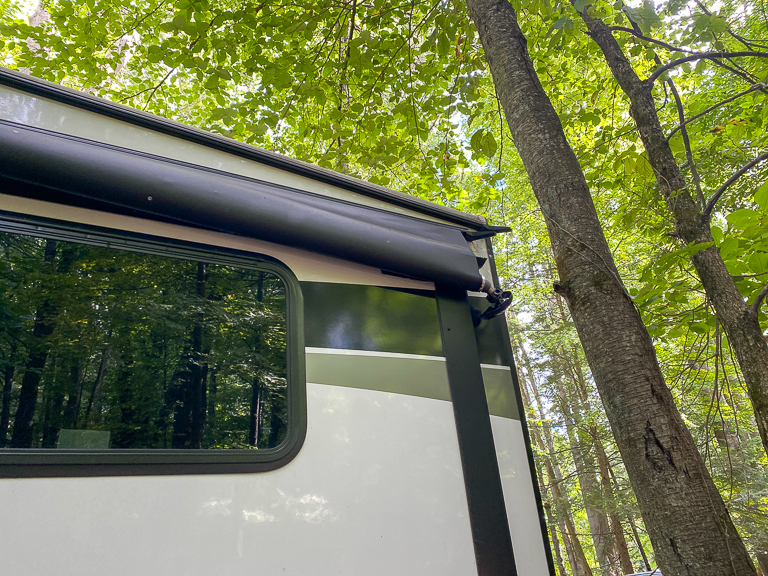 Theresa hopped out of the truck and kept an eye on things as I still tried to navigate around the rest of the turn. I slowly worked the RV around the rest of the turn and just barely missed the tree on the right side. This was not a good loop to try to turn things around. Another large RV was already in a site watching the whole thing. They said they had problems moving around here too. 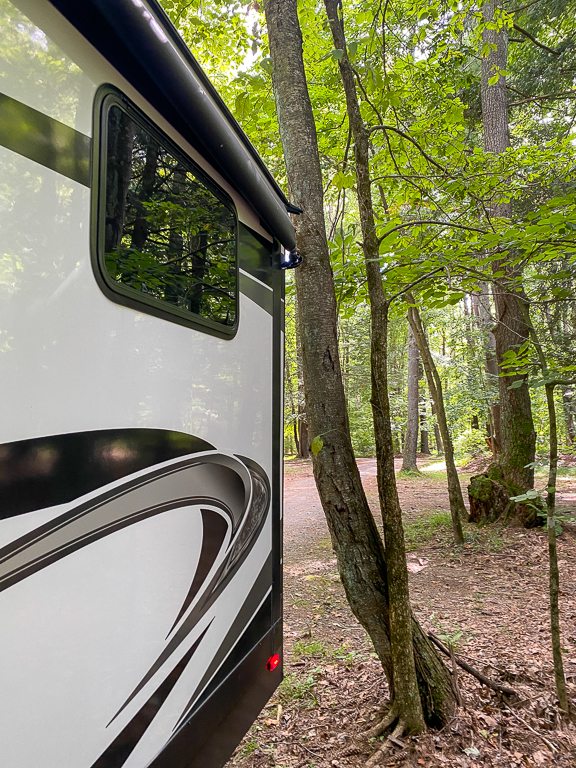 Looking back, I should have gotten out and looked (GOAL) but I really don't know what I would have done differently. This whole thing put me in a little bit of a funk for the weekend. It's the first time I've hit anything with the RV. 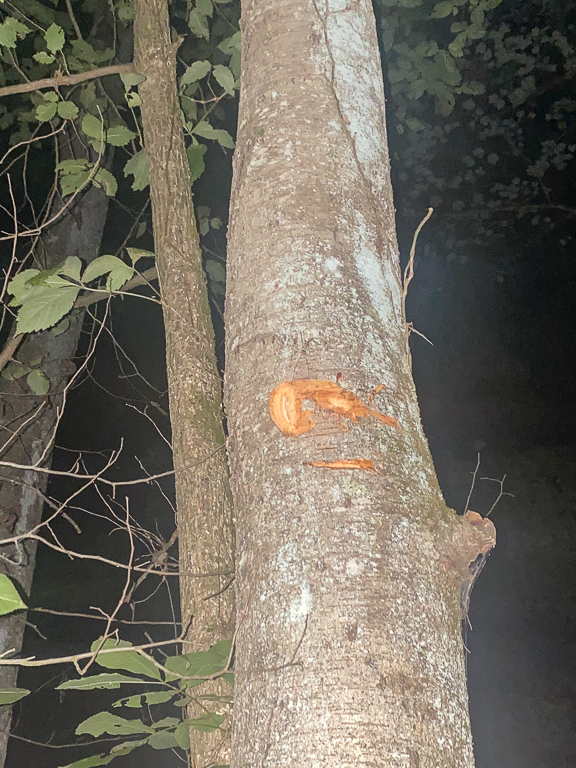 Luckily it was just a piece of plastic. Not any body damage to the RV. I was able to cobble together a fix with some of the hardware I keep with me in my travel bin for maintenance. 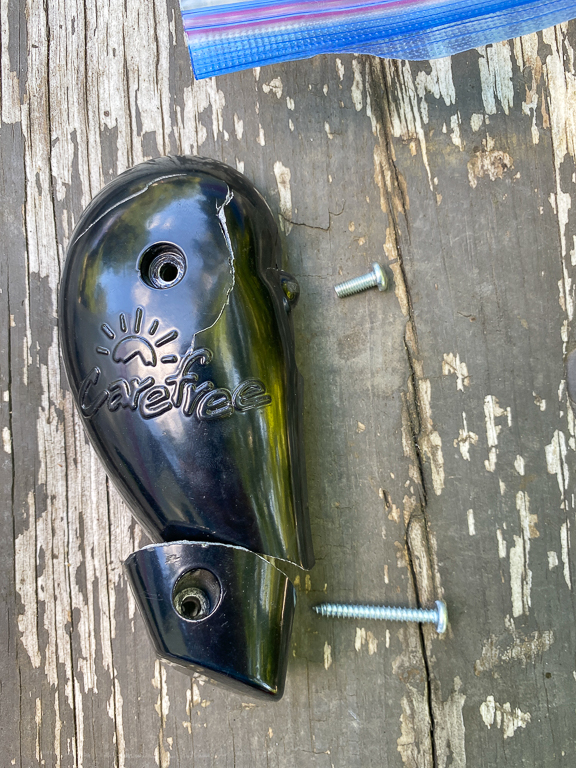 Alright, well enough about that. Eventually I made it around and back into a new spot. I do like picking the ones on the ends of a row. It might have a little more traffic going by it, but we're not looking out the window at another RV. 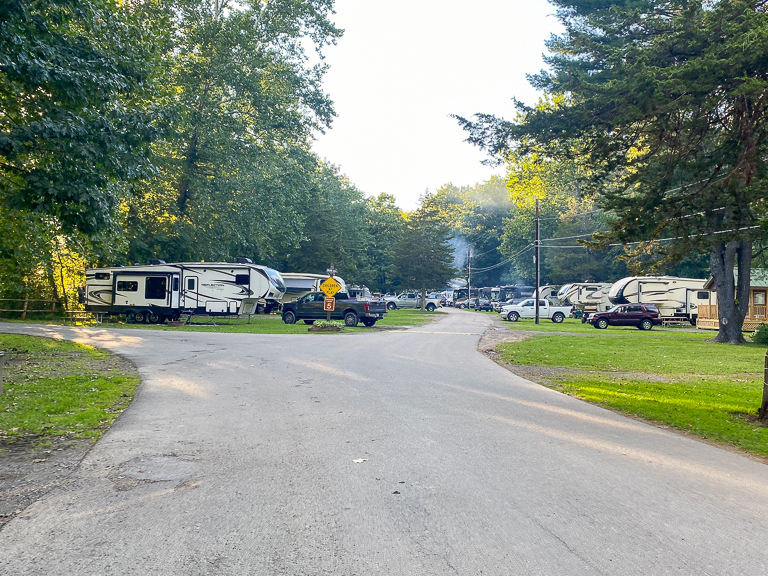 We're only here for 2 nights. It's really crowded here, so I don't expect we'll get out to do too many activities, but we're still going to explore the grounds. 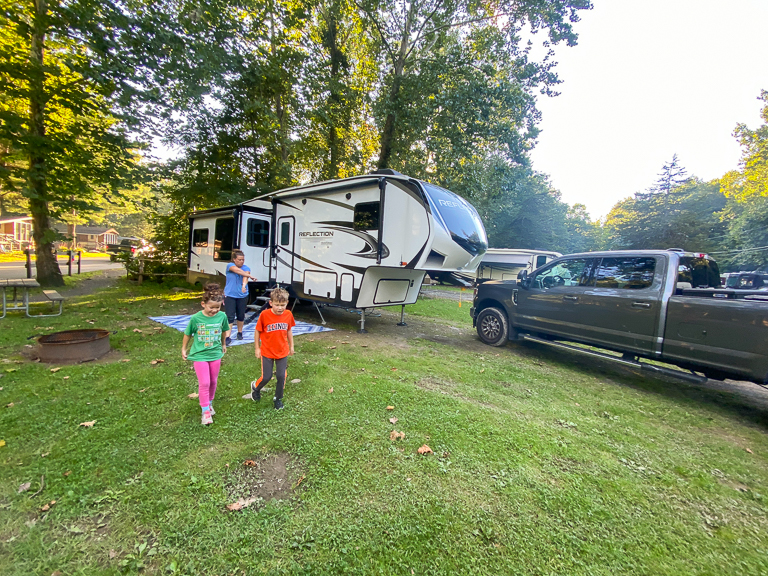 At least we can get a bit of walking in. Over the days we were here, we managed to rack up over 8 miles to add to our quest for 500. 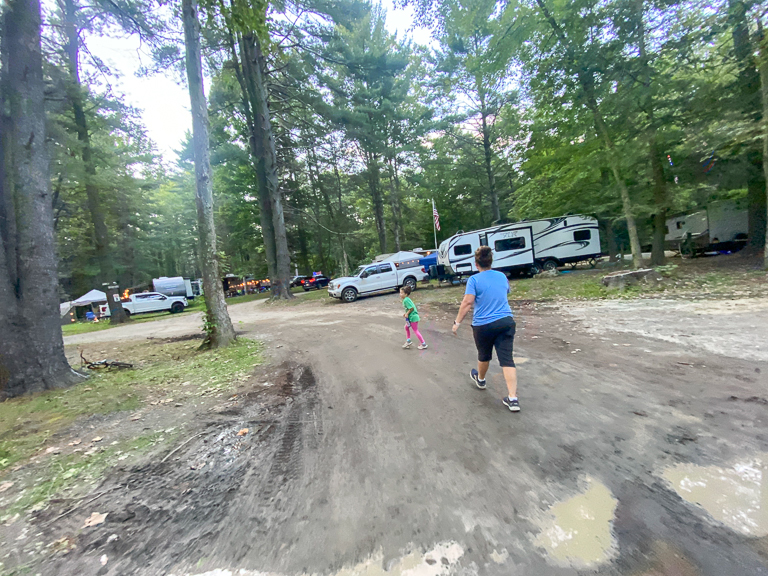 Right behind the RV was a playground. 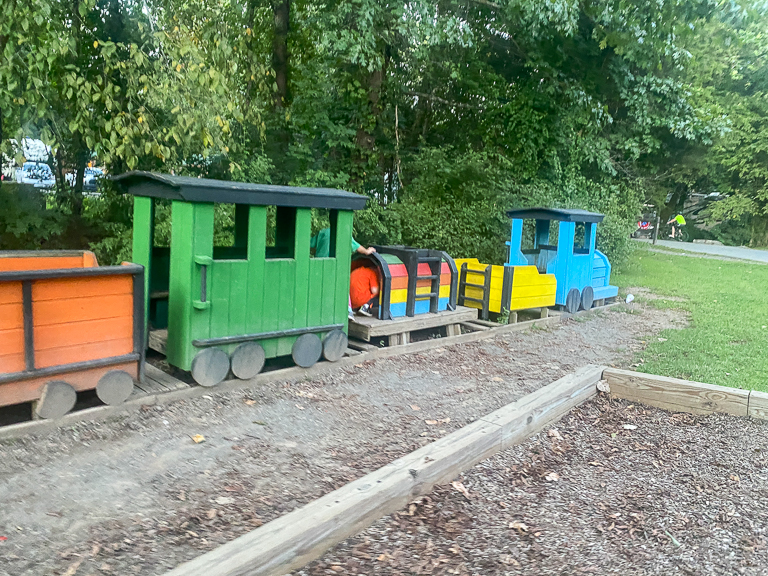 There was a steady stream of kids coming and going, sometimes across our front yard. The activity center was also beside the park. There was a DJ and music playing over the holiday weekend. 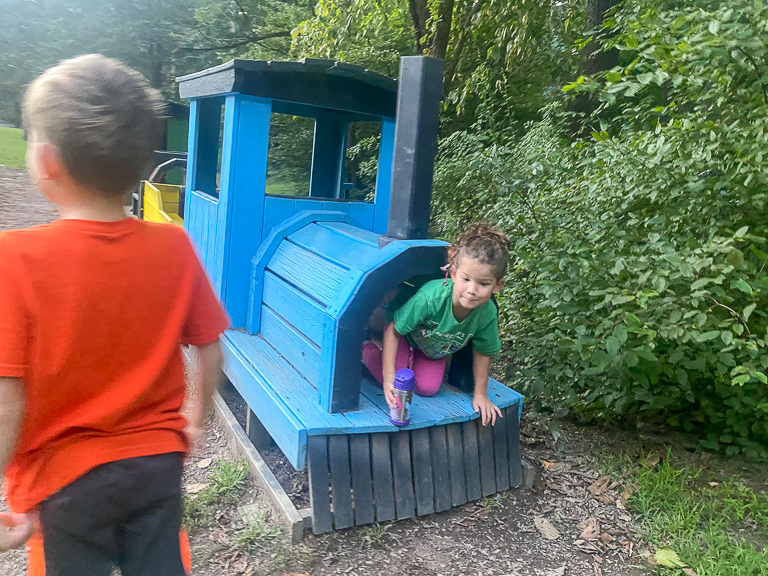 Alli - Daddy, get a picture of my ice cream sandwich with a smily face! 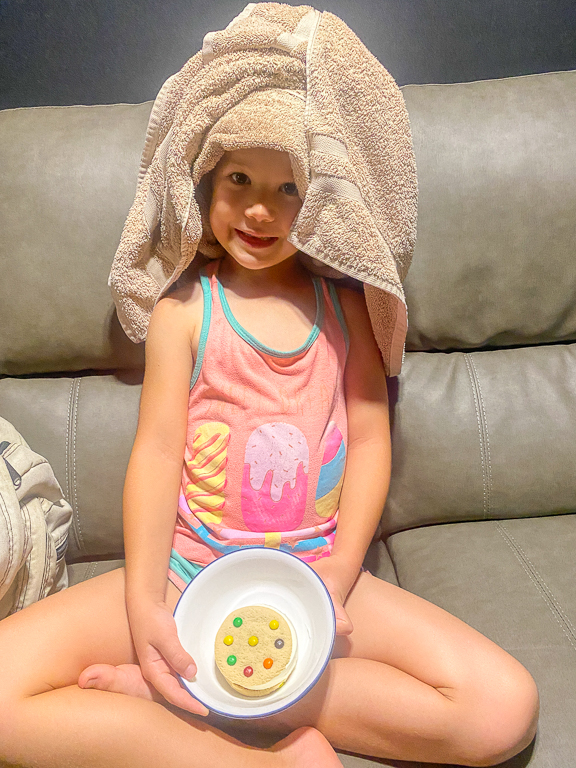 It's not just walking we need to get in. We've also got to get our biking in. There was a trail that was highly reviewed, but it was soggy and muddy on the first few hundred feet. We decided to turn around. Luckily it's on a dead end street with a park that has a half-mile loop around it. Determined to get in miles, we cranked out a dozen laps.
Alli's bike has been having problems where the pedals and back tire completely locks up. It takes an adult to step on the pedal and break free whatever is stopping it. It's been happening more and more often and it's finally time for an upgrade.
Back in California we had Alli try Ian's bike, but she was too short. I had them swap bikes and now she's tall enough! After only half a lap, Alli said "Daddy! Can you please get me a bike like this!" She was also flying around the track, doing laps and keeping well ahead of us. I think she needs a new bike. 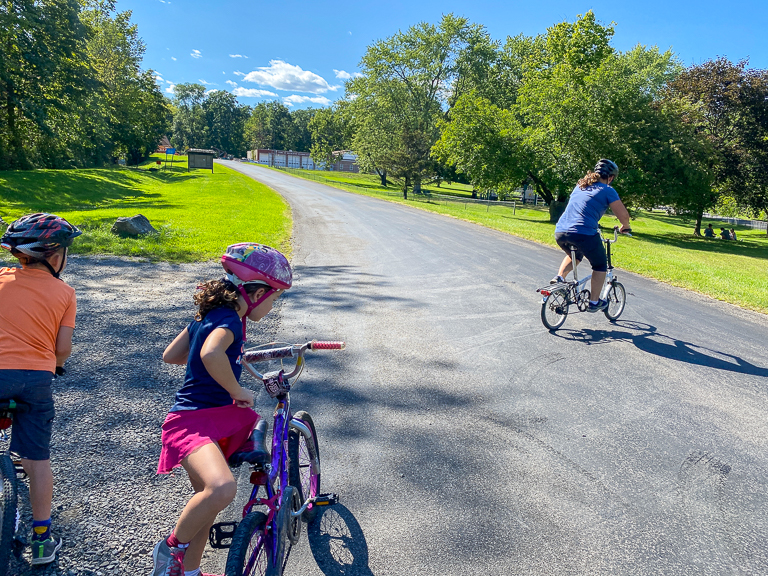 The last night, we got out with our light vests for a walk. They get lots of comments from people who see them. It's like a glowstick, but battery powered!