It's almost Halloween, which means that our favorite Monster Cereal is back!

And this year, it's not just Count Chocula, Franken Berry, and Boo Berry. The Frute Brute and Yummy Mummy are also making an appearance. After decades apart, all five of them are teaming back up to bring us a Monster Mash cereal! Monster Cereals started in 1971, so this year they are celebrating their 50th anniversary! 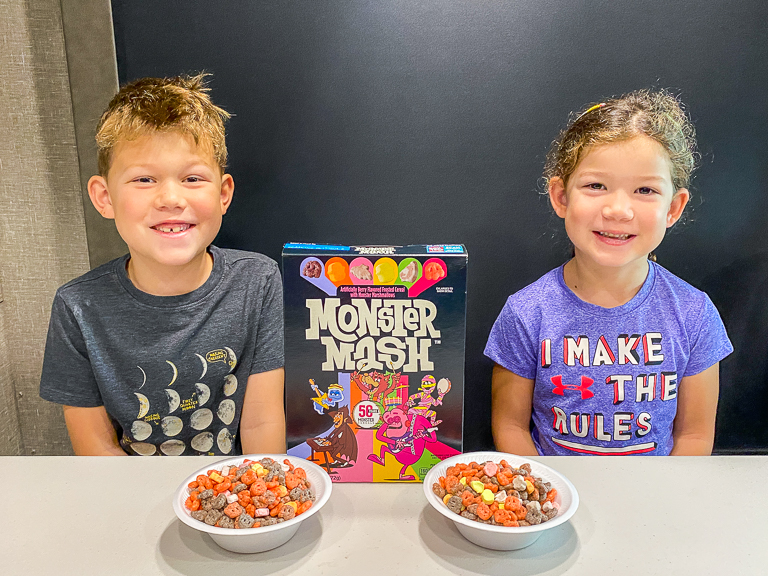 General Mills has labeled this as a Reunion Tour. The five monsters had broken up, but they're all coming back together for the 50th to sing The Monster Mash together. 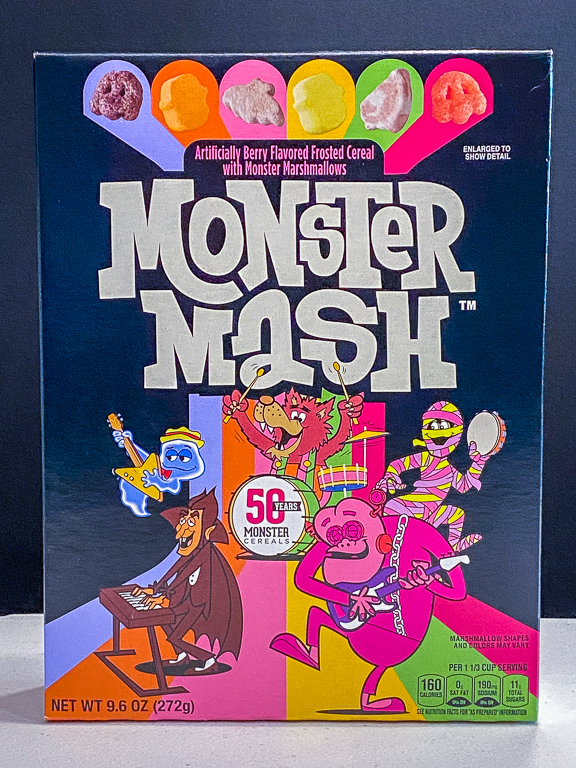 On the back of the box we see all the monsters rocking out. There's Count Chocula who is the Lead Singer and on the Keyboard. Franken Berry plays the Bass Guitar, while Boo Berry is on the Electric Guitar. Frute Brute is on Drums, with the Yummy Mummy rounding it out on the Tamborine. 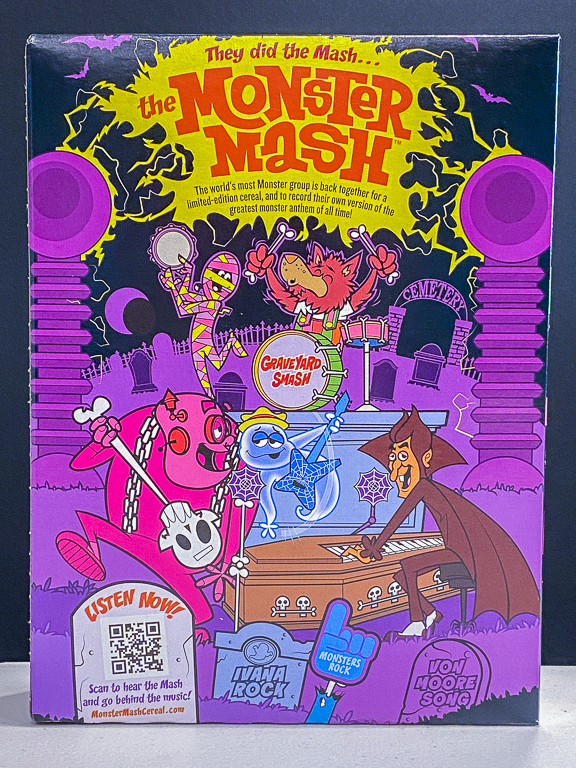 There's a whole "Behind the Scenes" making of video.
Why did they get back together?
Count Chocula - For the love of the music. And money. And also because Santa Claus has like 80 different songs, but monsters really only have this one.
There's even special appearances by Lucky the Leprechaun and the Trix Rabbit.
You can check out their website at MonsterMashCereal.com and watch their video and listen to their cereal-themed recording of The Monster Mash.
The top of the box shows the logos for all five cereals. Count Chocula and Franken Berry have been around since 1971. Boo Berry came along in 1972. Frute Brute with his fruit flavored cereal and lime marshmallows came out in 1974 but was discontinued in 1982. In 1988 the Fruity Yummy Mummy arrived with fruit flavored cereal and vanilla flavored marshmallows. It was discontinued in 1992.

So with all 5 Monsters combined, what does the cereal inside look like?
The cereal shapes are still the same Pacman ghosts as usual. From the coloring, they look like they are from Franken Berry (strawberry) and Boo Berry (blueberry). No Count Chocula cereal pieces mixed in with this Berry flavored cereal. 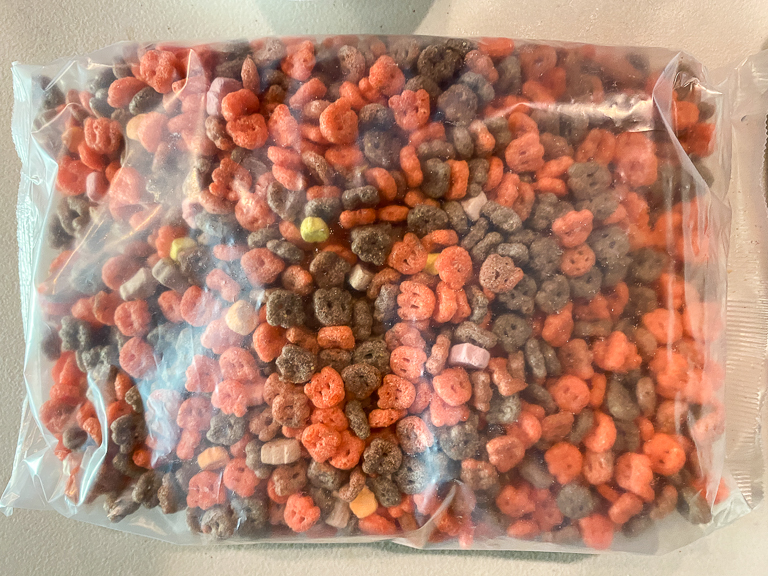 The bowl has a variety of different marshmallows in it. 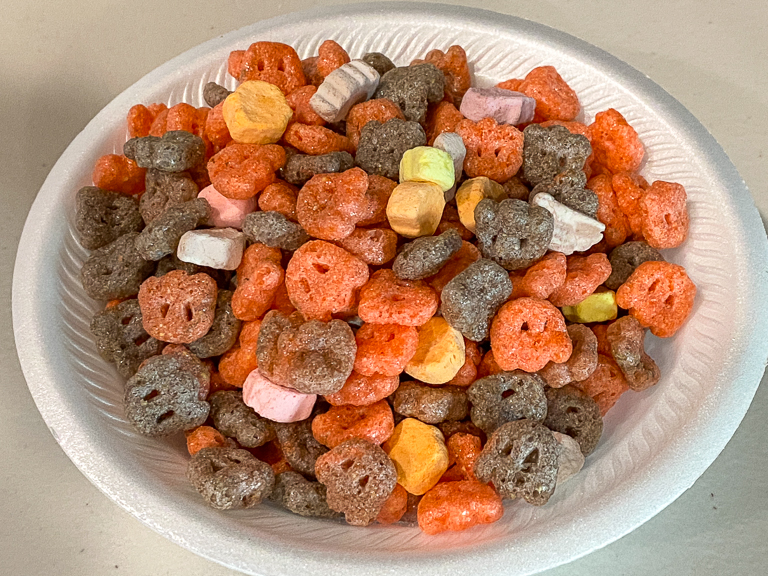 The box shows four marshmallows, but the kids and I found 8 different colors and shapes.

Along the top, filling in for Count Chocula there's four different chocolate marshmallows. Tasting them, there is actually a hint of chocolate flavor to them. At least Ian and I thought so. The shapes are a Ghost, Lightning Bolt, Bat, and maybe another Ghost.
There's four different color Franken Berry marshmallow heads. All of them had the same vanilla taste.
In previous years, I could tell the difference between the two cereal flavors. This year though, they have the same berry flavor. 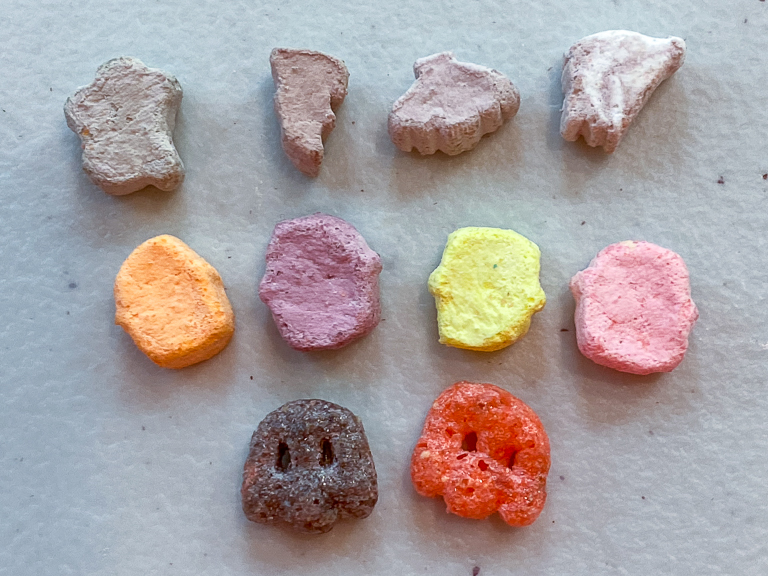 Ian likes to save the best for last, so he's picked out each and every marshmallow from his bowl before I added the milk. 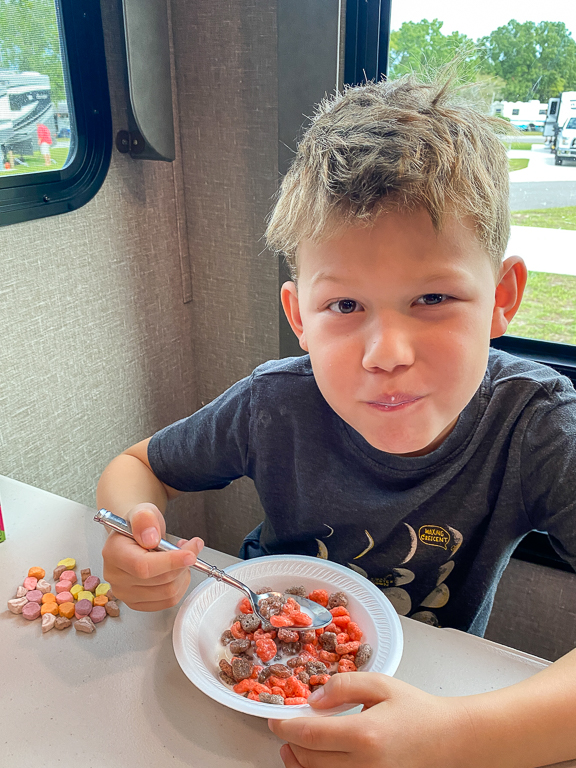 There's no games, so instead they read the side of the box. 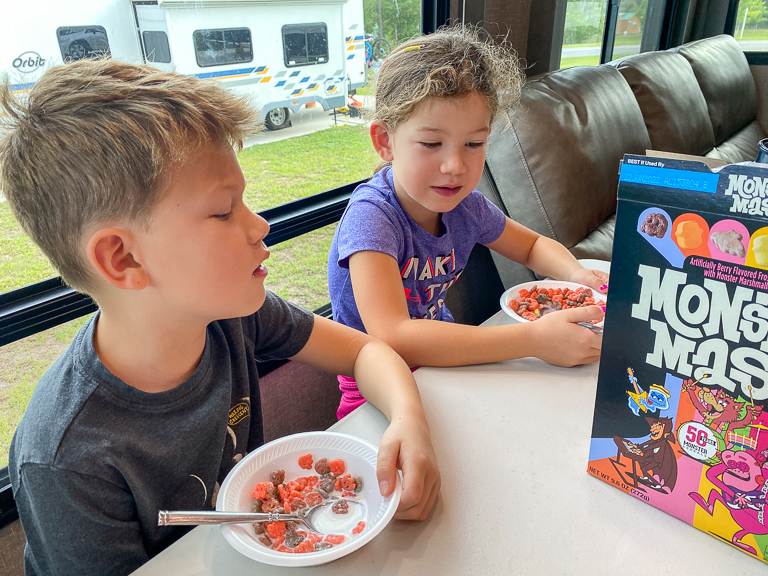 Which gives a brief history of the Monster Cereal. 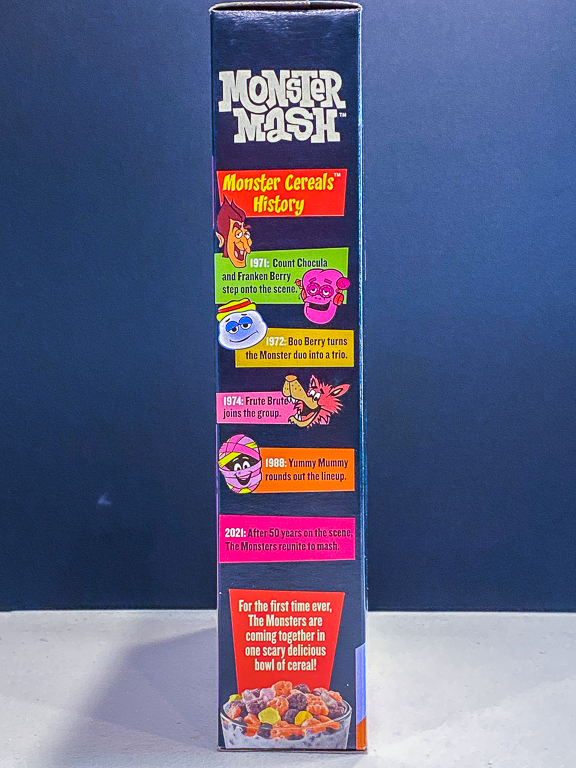 Even Theresa gave it a try.
Theresa - That's a lot better than I was expecting! It has a Crunch Berry kind of a flavor to it.
We all enjoyed the cereal this year!