Another Massachusetts pizza? We love dessert pizza and Massachusetts just has some great things to take inspiration from! Yes they're known for Boston Baked Beans. The Fluffernutter was invented here as well. But perhaps the biggest thing to come out of Massachusetts, the thing that has become the standard for what someone thinks about when you mention a cookie, is the Toll House Chocolate Chip cookie. 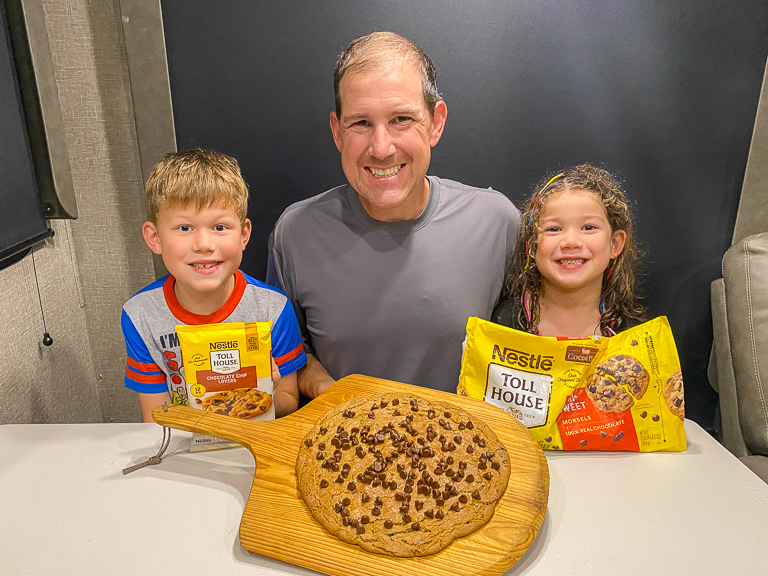 Photo from historicnewengland.org
The Toll House Inn, located in Whitman Massachusetts, was built in 1930. Ruth Wakefield cooked the food for the inn, but was really known for her desserts. In 1938, with her butter drop-cookie recipe, she chopped up a Nestle semi-sweet chocolate bar and added it to the cookie batter. The chocolate didn't melt and spread through the cookie, but stayed in a chip! The world's first Chocolate Chip Cookie was born!
She contacted Nestle and they agreed to print her recipe on the package of semi-sweet chocolate bars, and she would get a lifetime supply of chocolate! 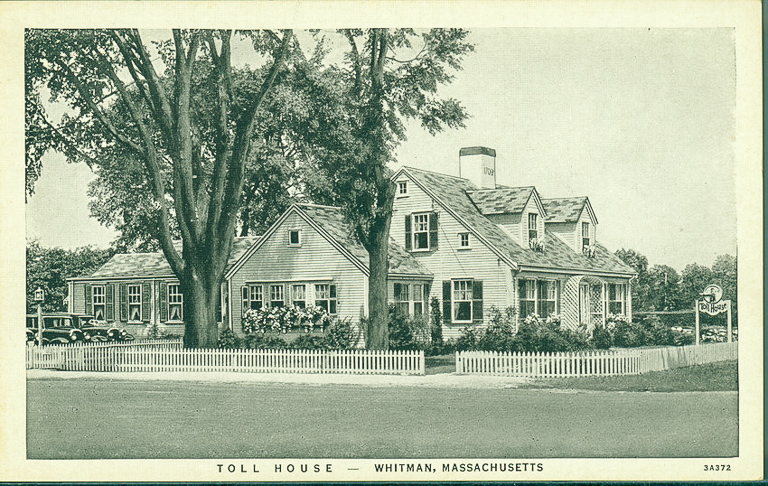 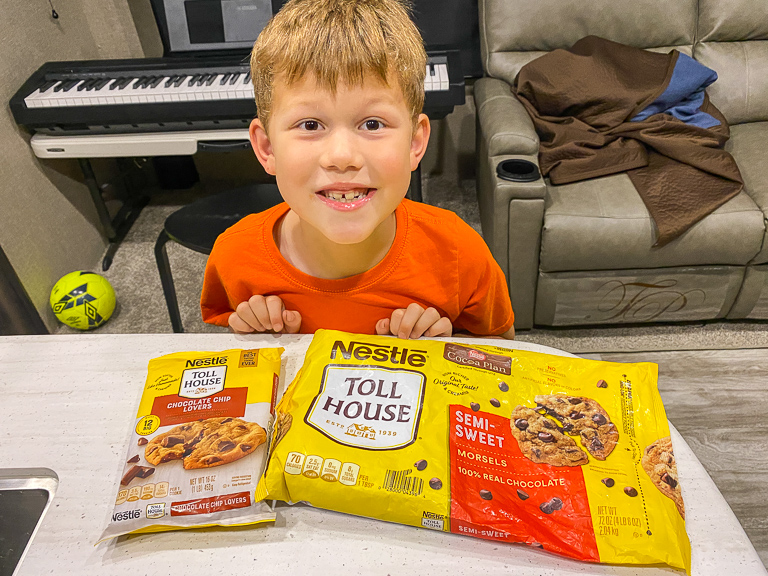 I pressed out the cookie dough into a rough circular shape. 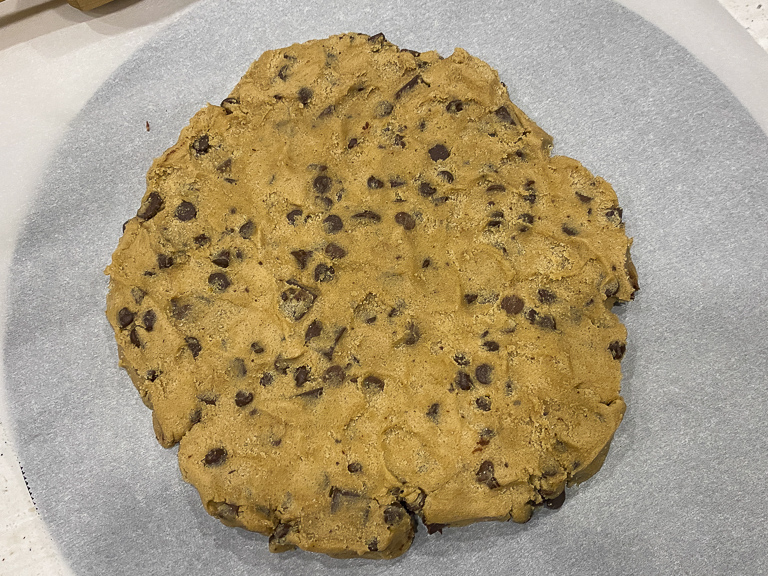 I covered it in parchment and used the rolling pin to make it a uniform thickness. 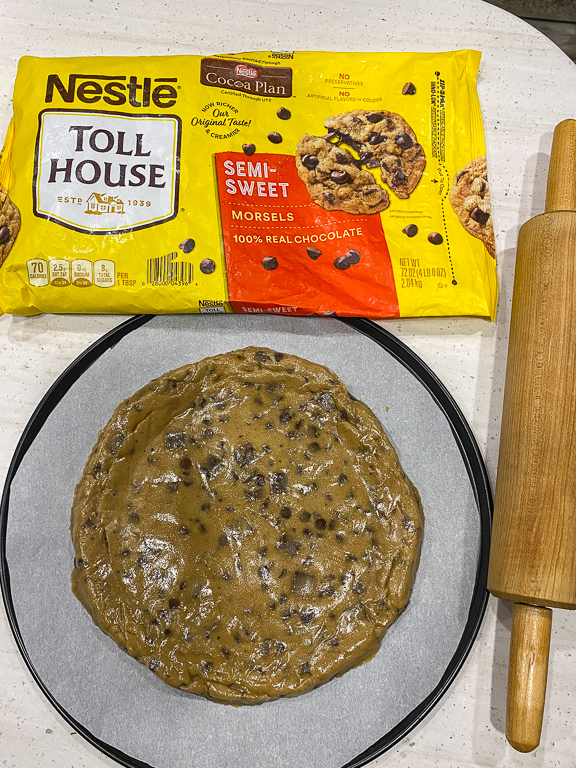 Last, I built up an edge, giving it a crust. I don't think it's going to hold, but I do know that the outside is going to cook a lot faster than the inside. Maybe with this extra mass on the outside it'll cook in the same time as the center. 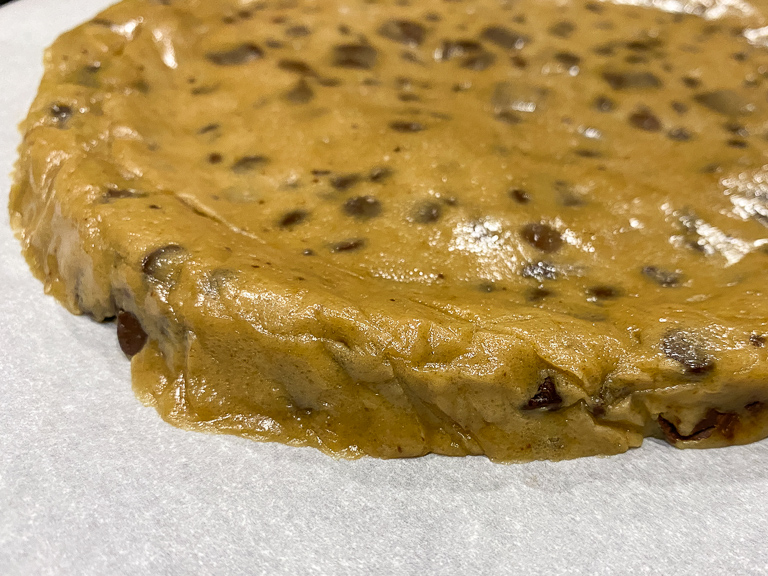 Very carefully, Ian moved the cookie to the toaster oven. It's 350F so we can't touch anything inside or on the door. 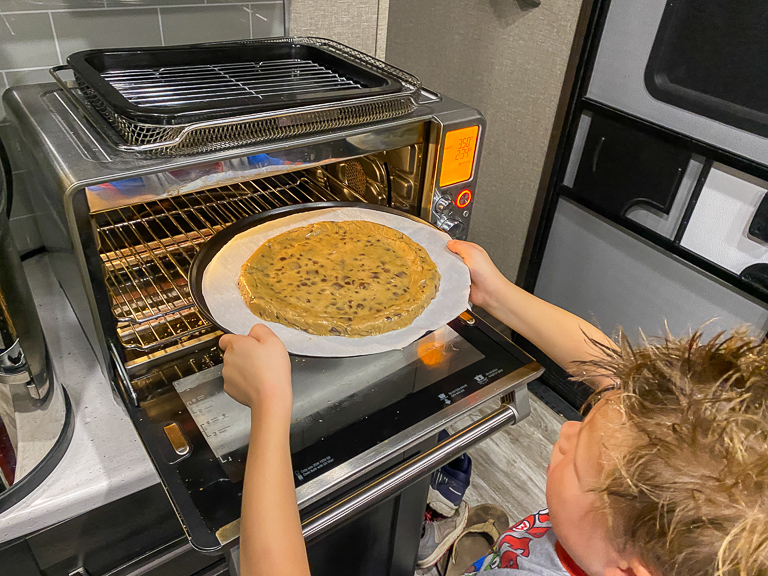 Regular cookies bake for 12 minutes, but this is a lot bigger! It's spreading out a lot! I cooked it for 10 minutes, then pulled it out so we could add our toppings. 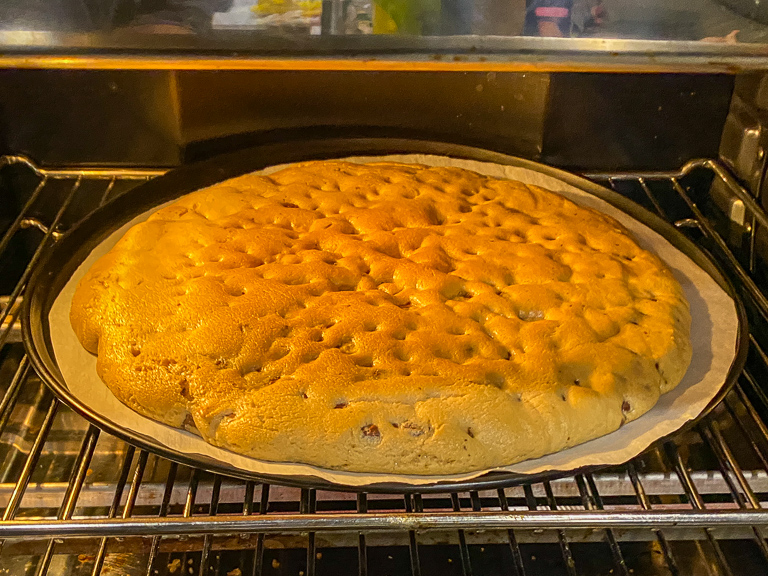 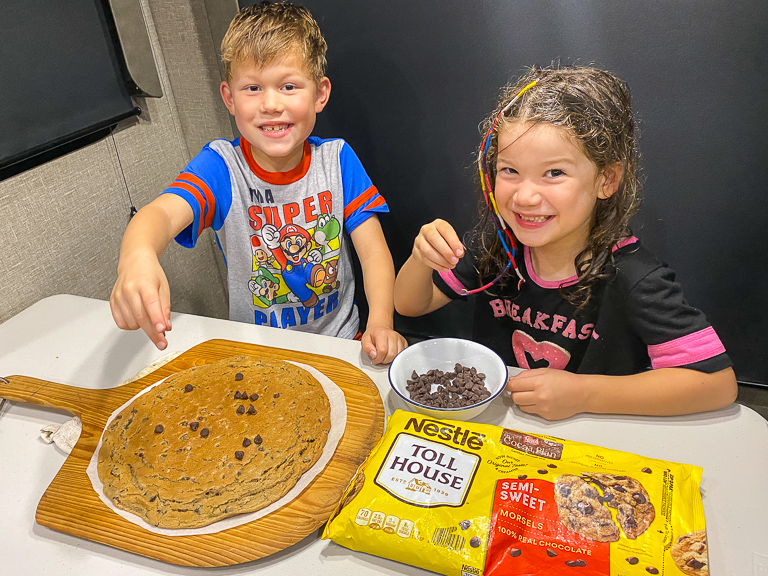 Alli what are you doing? 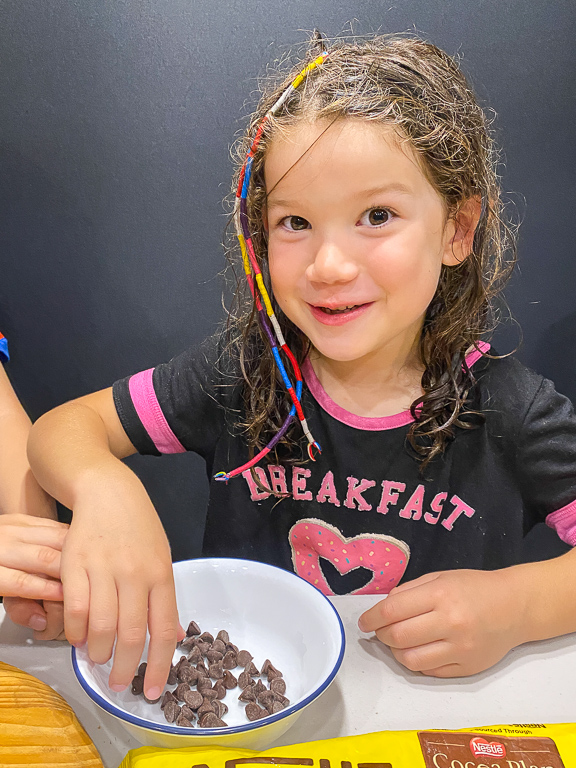 Alli, those are for the pizza! 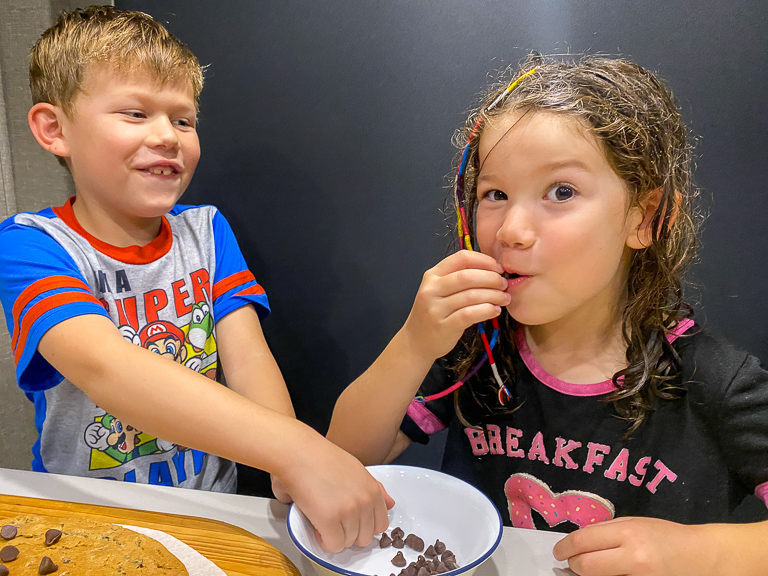 Back in the oven for another 5 minutes. 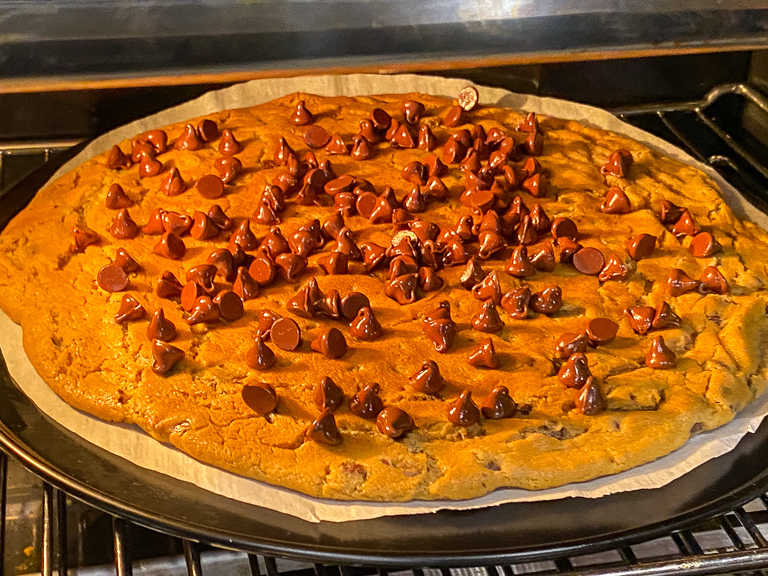 That's been smelling delicious! Now it's time to eat it! 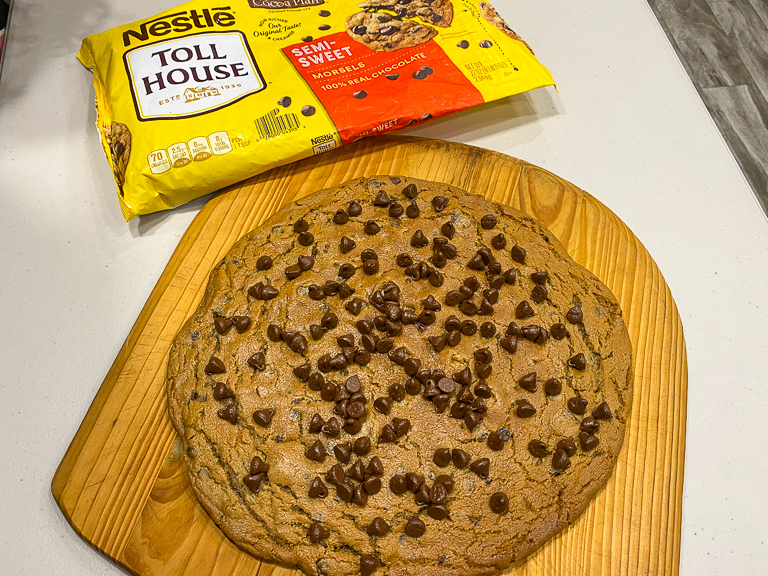 The kids are excited! They've been looking forward to this one. 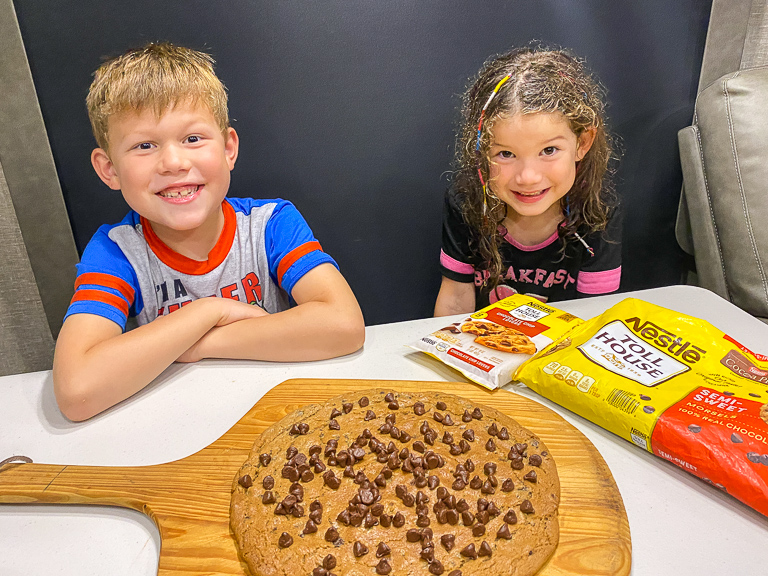 I cut it into pizza pie slices and was happy to see that the edge was a little crispy while the middle was chewy but cooked. 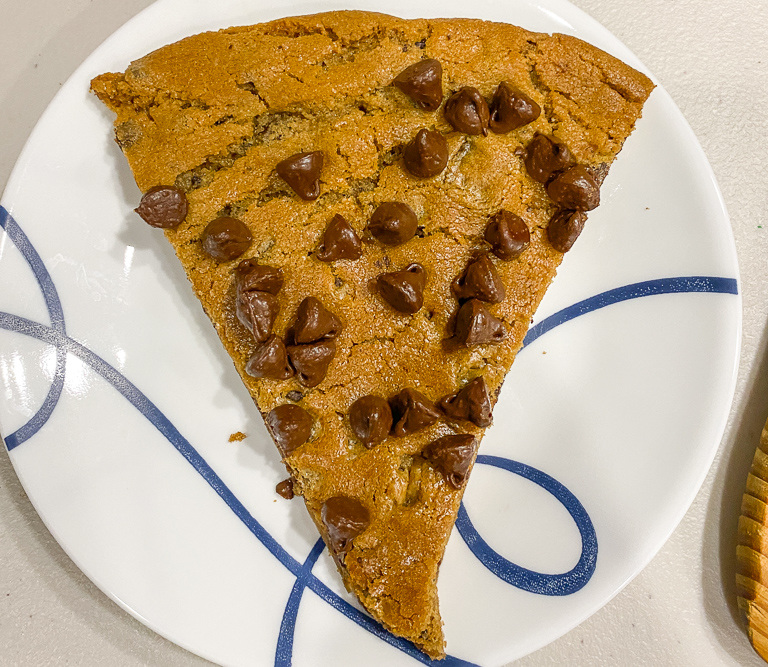 They were eager to point out which slice of cookie pizza they wanted, mostly the ones that had a lot of chocolate chips. 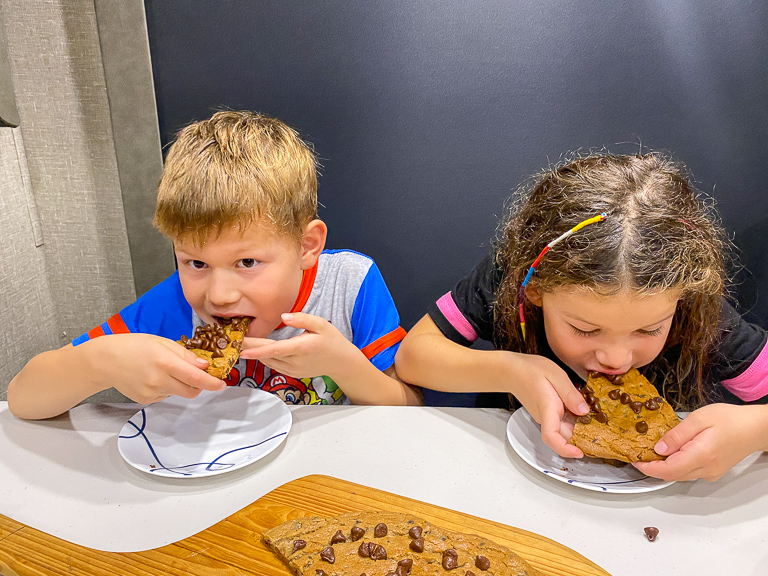 They were so tasty! 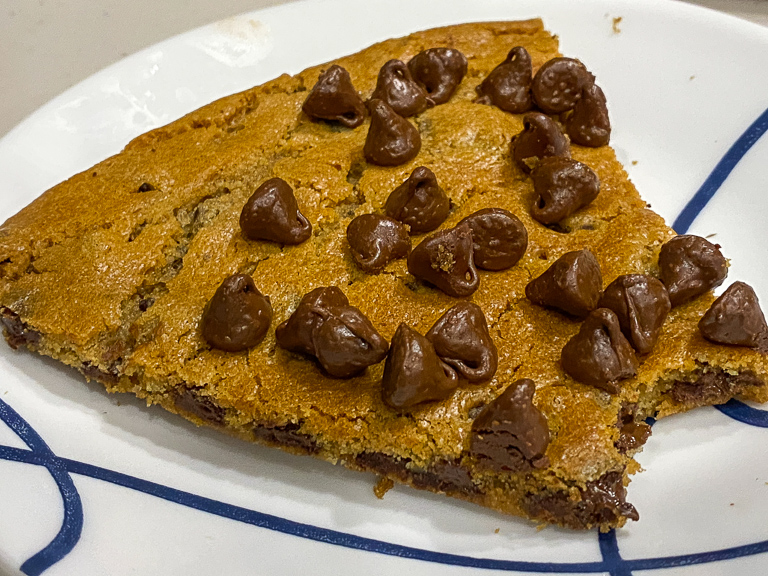 Ian finished his, then reached for a second slice.
Ian - This is the best pizza you've made.
There's 6 thumbs up (out of 5) from Ian. Alli is giving me a big thumbs up too. 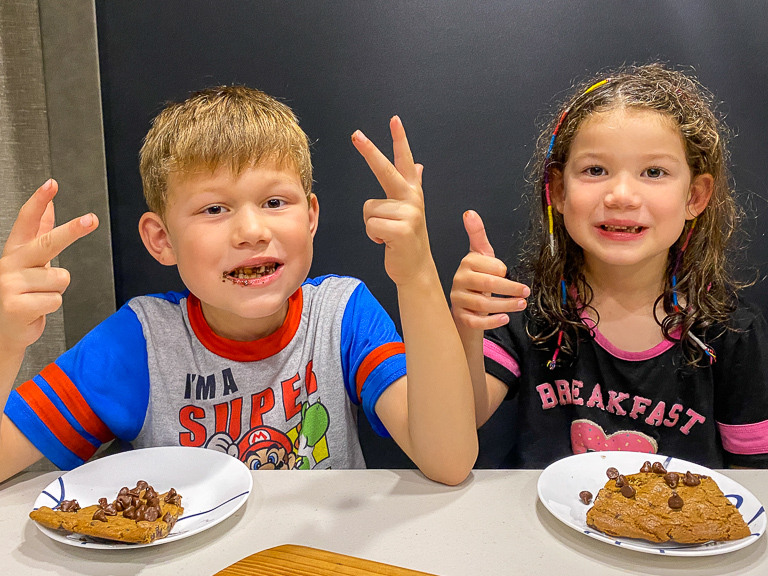 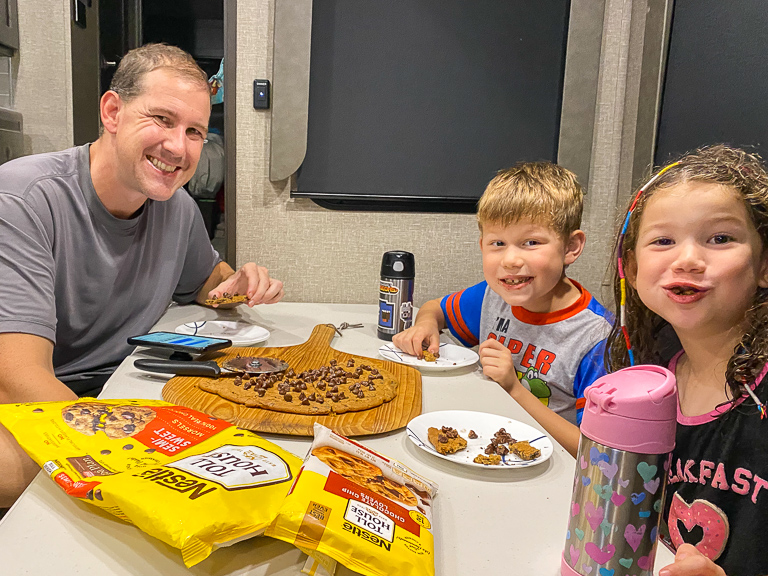