Near our Sandy Beach campground is a dairy farm that has had some rave reviews for their flavored milks. We've got to see what all the fuss is about.

Contoocook Creamery at Bohanan Farms has been operating since 1907 and their fifth generation of farmers are working there. 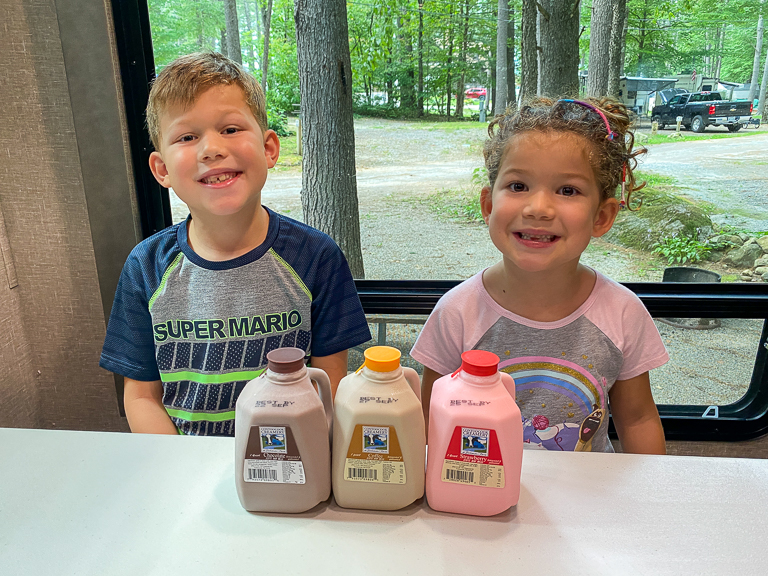 They offer three different Flavored Milk options. Chocolate, Coffee, and Strawberry.
Their milks are sold in local stores, and even in schools, but why not make a special trip out to the farm and get it directly from them! 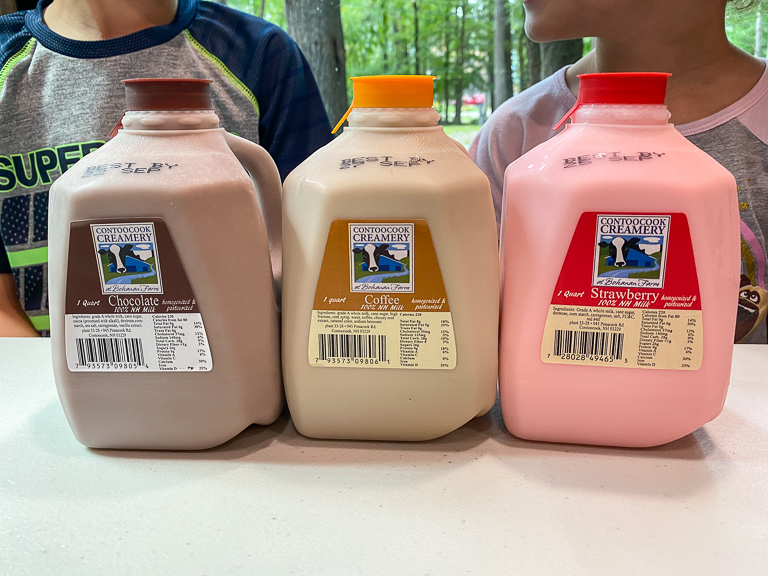 Just about 15 minutes from our campground is Bohanan Farm. Going on a Sunday I was thinking it might be a little busy. 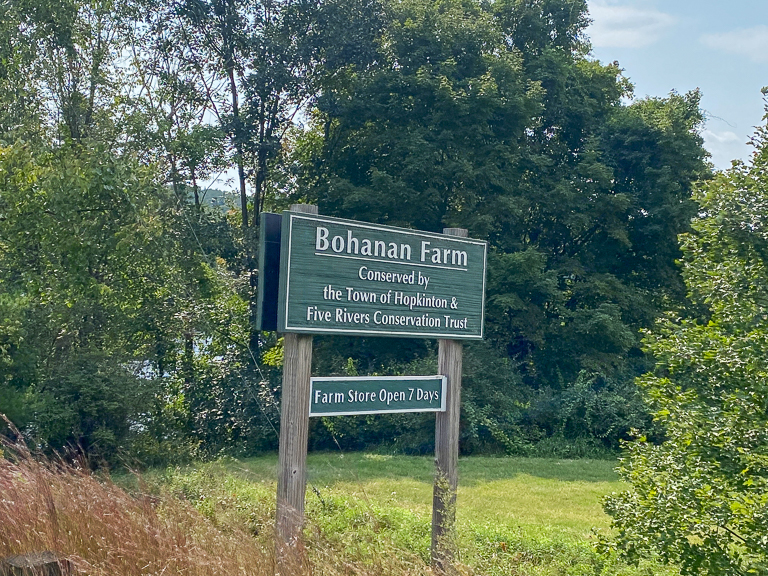 But it was just us when we drove down the long driveway and parked by the store. Well, us and one of the 5th generation farmers. He was trying to get a picture of about 10 of his dogs all sitting down around him, but as soon as our truck pulled up, a few of the dogs got distracted and came running over to see us. 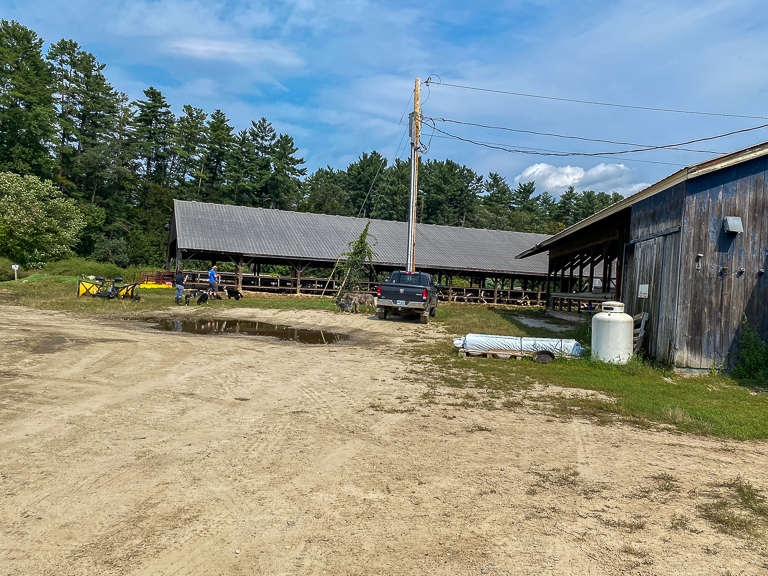 Our first stop was to see the milk cows. There's over 200 of them, producing 1000 gallons of milk a day! 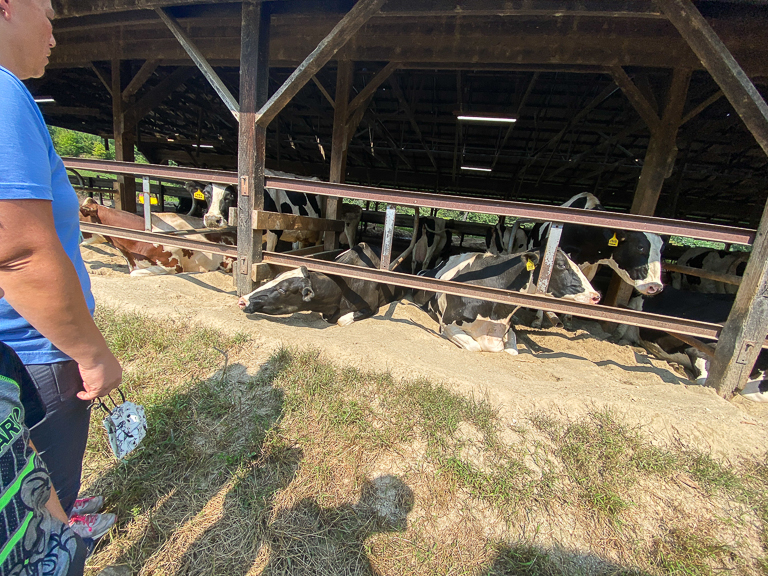 Let's go see the results of their hard work! The farm store is just behind this red door. 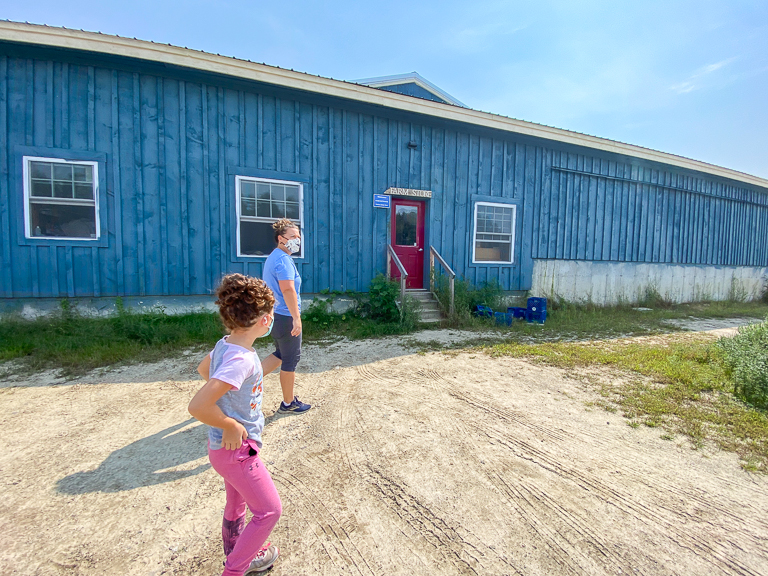 It's a fairly small room with a few different coolers and freezers. That sliding window in the back goes to a refrigerated room and the milk is within reach on a shelf.
Payment is based on the honor system, with an antique cash register that is permanently held open with money sitting out. 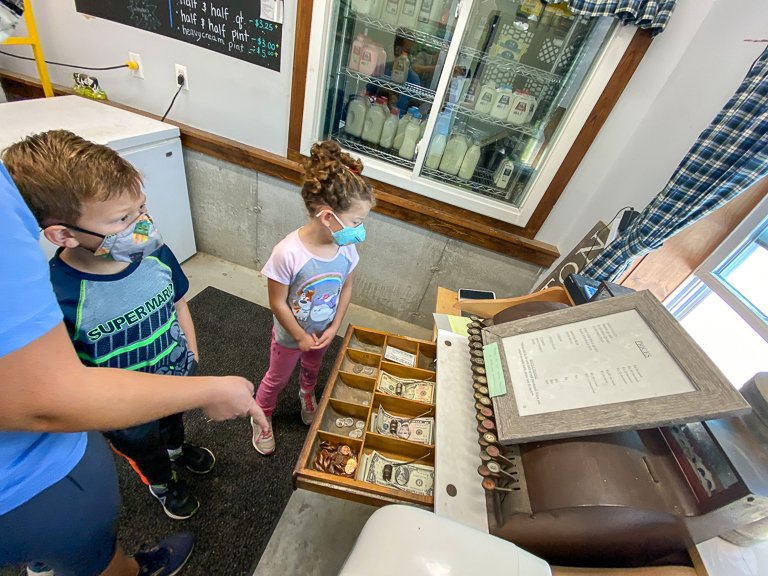 Prices are higher than you might find in the store for generic milk. 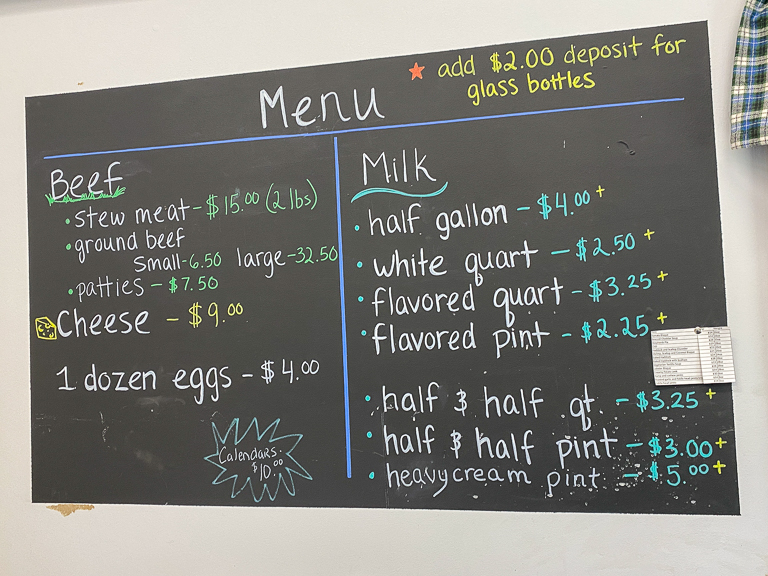 Along with the different milks, there's also eggs, beef, prepackaged stews and soups, bones, maple syrup, and corn. We're just here for the milk though today. 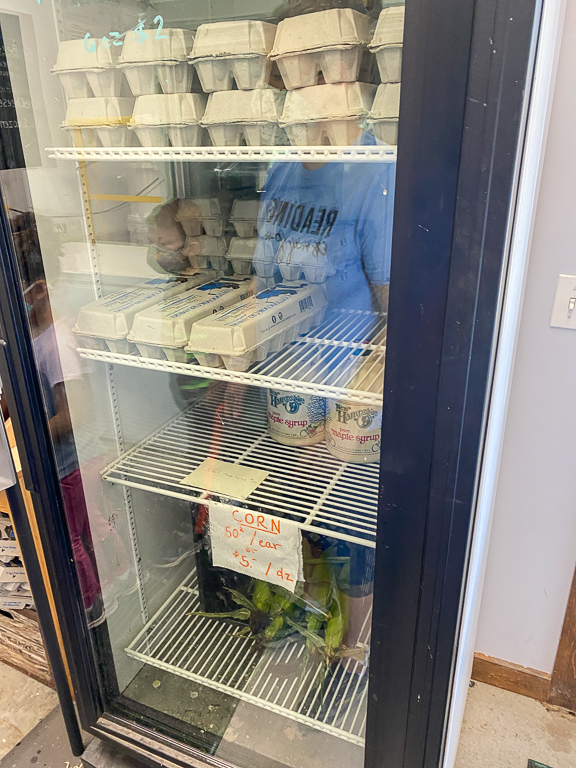 Just write down what you took on the pad, pay, and you're good to go! They even accept credit cards. Just type how much to put on the card, swipe it, and you're all set! 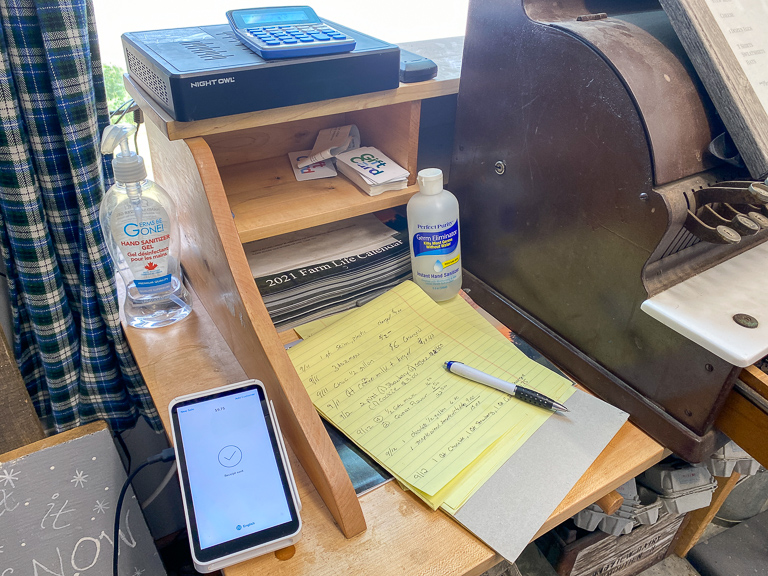 Now that we're back home it's time to give these a taste! I hope they're good!
Theresa thinks these tiny jugs of milk are adorable. The perfect size for the kids. And speaking of the kids, they wanted to pour out the milk for our sample cups. Of course Alli wants to pour out the pink milk. 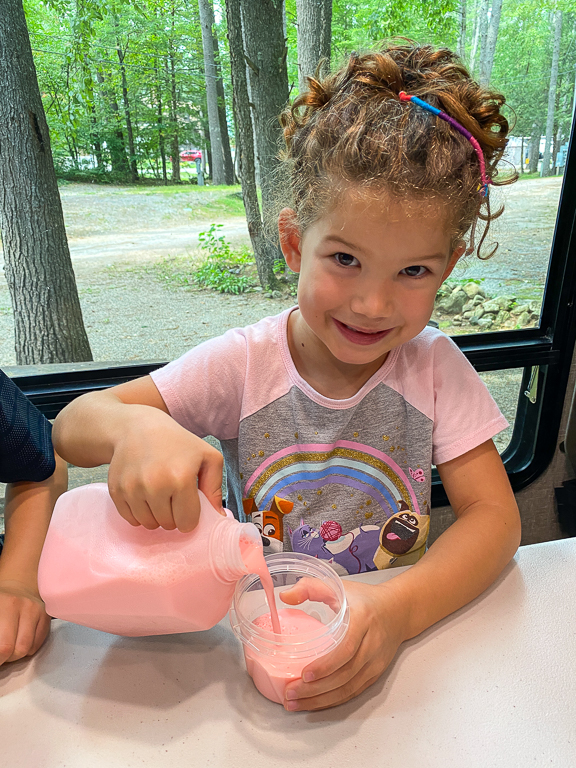 Ian is excited for the chocolate one. 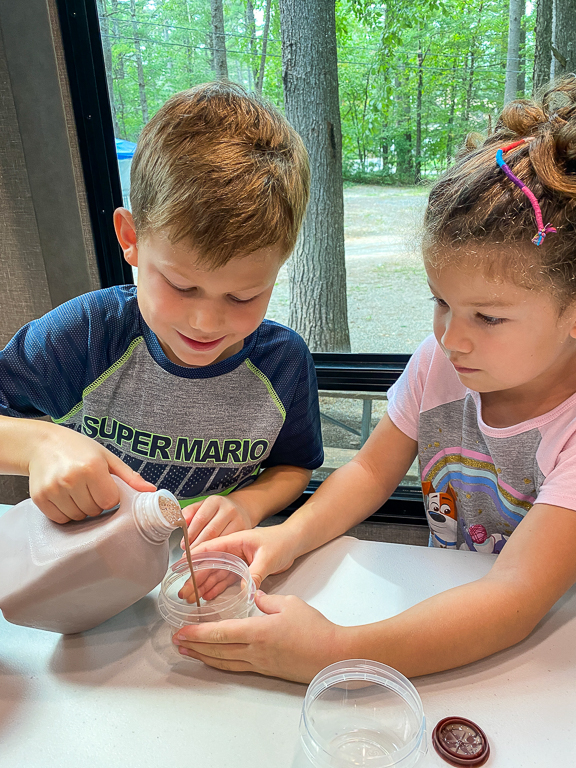 These quart containers of milk were $3.25 each.
One big thing this milk has going for it is that it's not a 2% or Reduced Fat like Nestle or Hersheys. It's Grade A Whole Milk, and cane sugar, with a few other ingredients added in. The carrageenans also act as a gel to give it a thicker flavor. 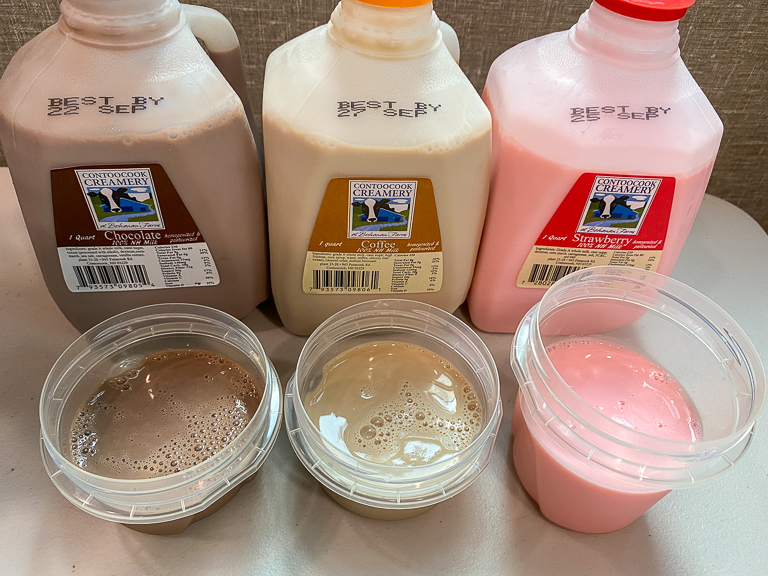 Which one should we start with kids?
Kids - Coffee!
Is that because you think it's going to be the worst?
Kids - Yes! 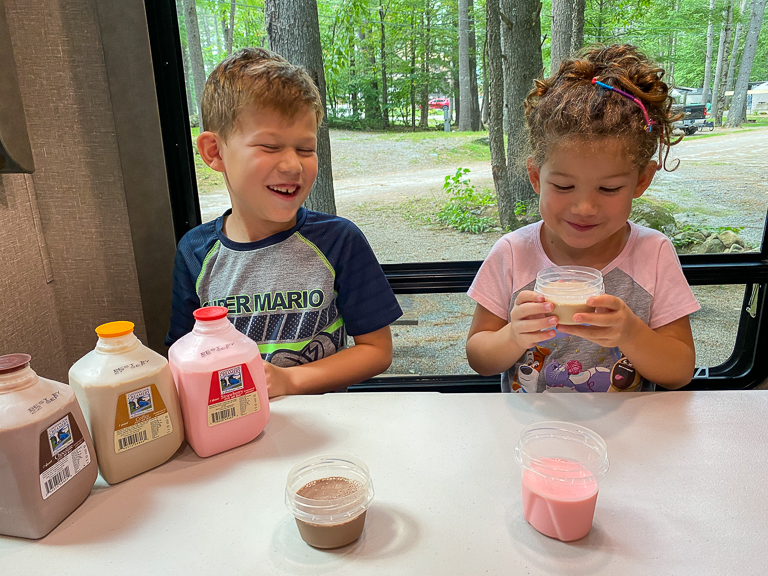 Alli tried it and said it was "Not bad". Ian wrinkled his nose before it even touched his lips, so I think he's already biased against it. 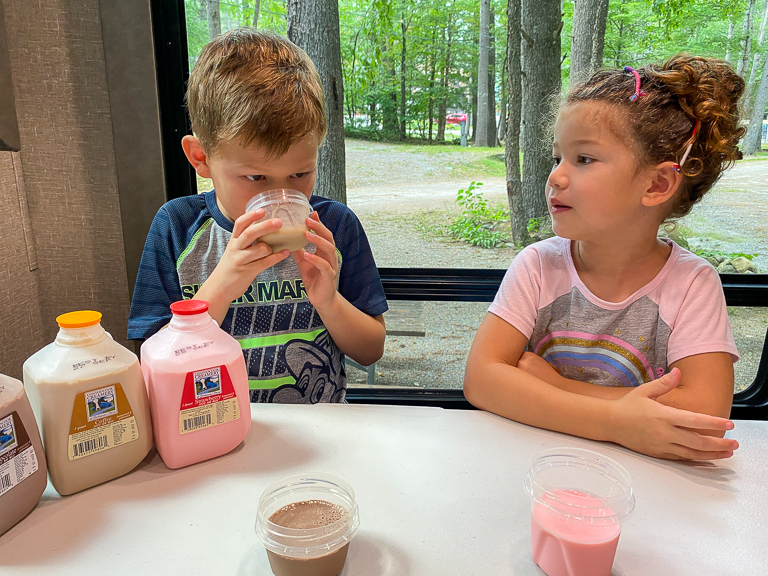 Theresa and I tried it and Yummy! This is delicious!
I had to check the label to see if they put any chocolate in here. To me, this tastes a lot like an Arby's Jamoca Shake, and that's a really good thing. 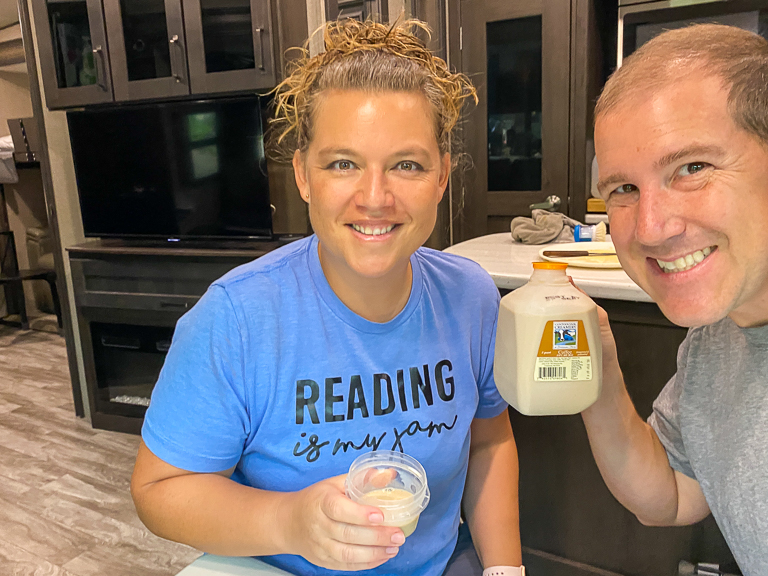 The chocolate tasted really good too. It does taste different than Hershey or Nestle. It's creamier than the Coffee milk with a thicker texture. I like it! Theresa thought it was a little too sweet. She thought it would make a good hot chocolate, as it already tasted like a melted chocolate bar.
And last we have the Strawberry milk. It's going for artificial strawberry flavor versus true strawberry flavor. Not that that's a bad thing. It's a very tasty milk. I don't see on the label what it's getting the flavor from. The Coffee milk has Coffee as an ingredient. The Chocolate milk uses Cocoa. The ingredients in the Strawberry milk are: Grade A Whole Milk, Cane Sugar, Dextrose (a sugar), Corn Starch (a thickener), Carrageenan (a thickener), Salt, FC&C (a coloring I think), Red #40. 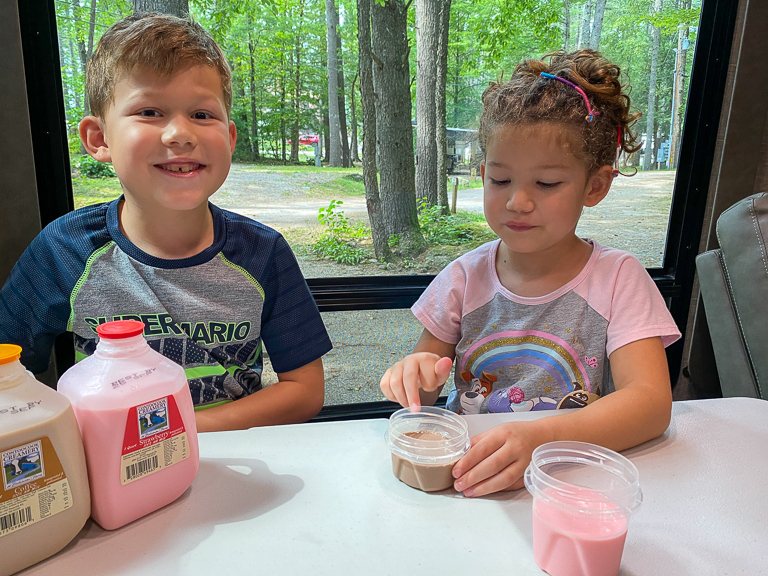 What are everyone's favorites?
The kids chose the Strawberry milk as their favorite, while the adults liked the Coffee milk the best. Theresa had high praise.
Theresa - The coffee was the best flavored milk I've ever had. 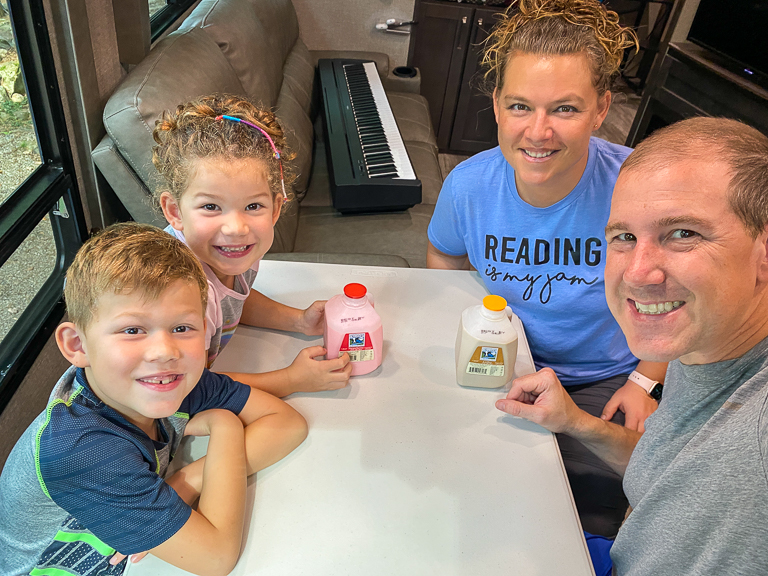 Alli asked if they could try mixing some of the milk. I think that's a great idea Alli! 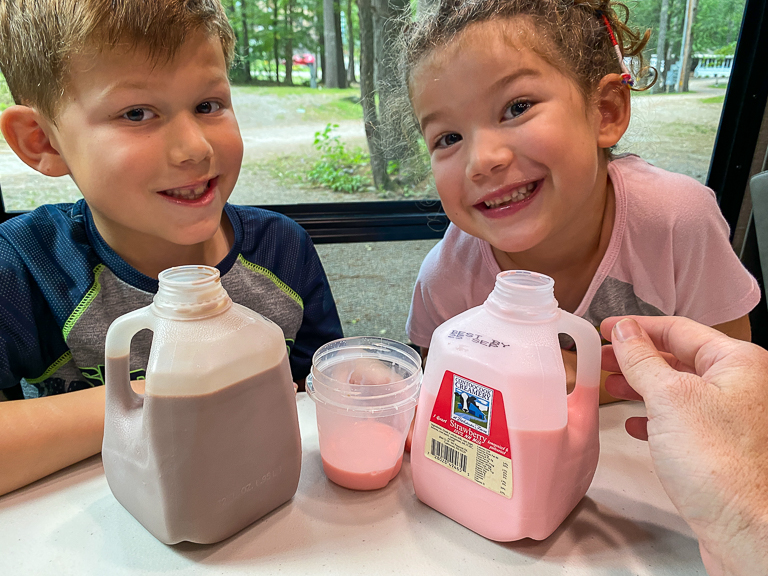 I guess the chocolate milk is a little thicker than the strawberry milk. Well after mixing one thing, you've got to try mixing them all. 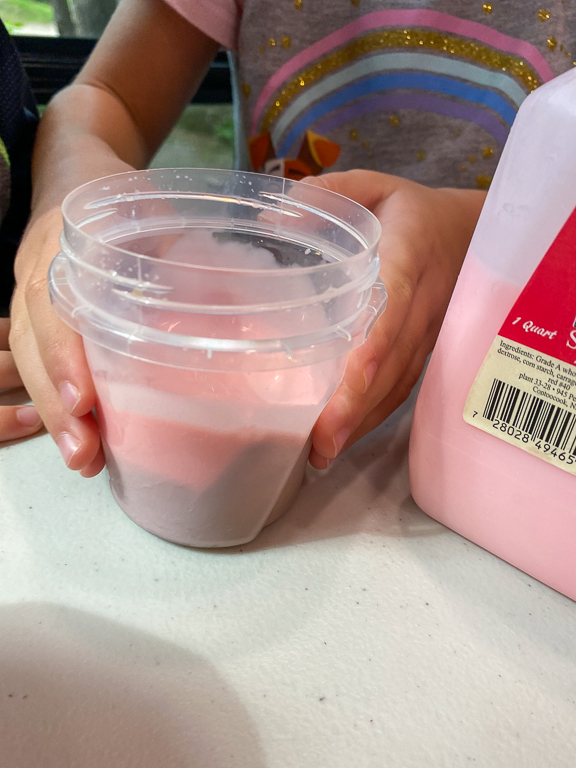 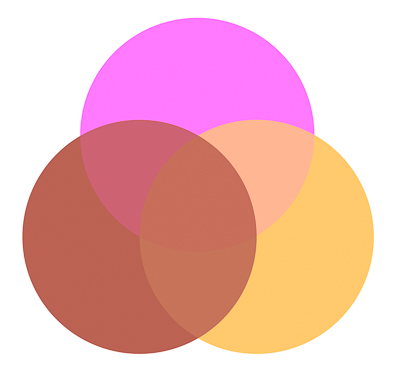 Theresa and I had the same idea. If coffee is good by itself, it's probably even better with chocolate. 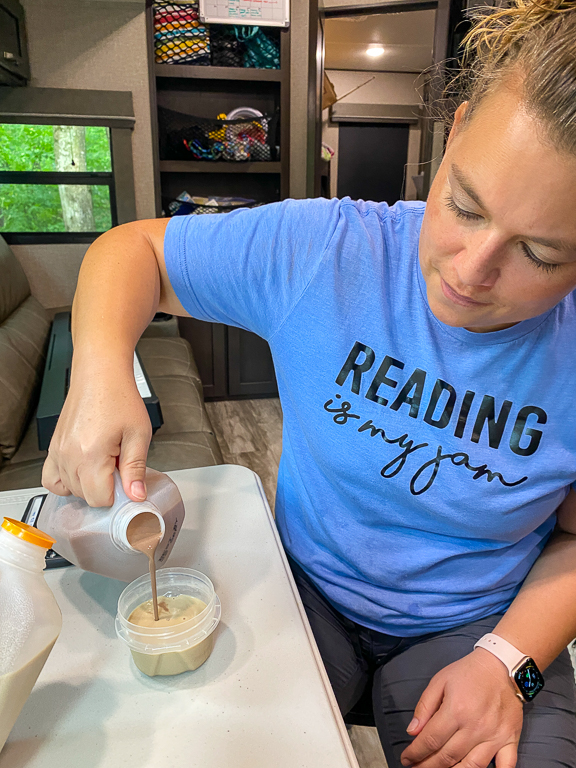 The kids got to mixing their own concoctions. 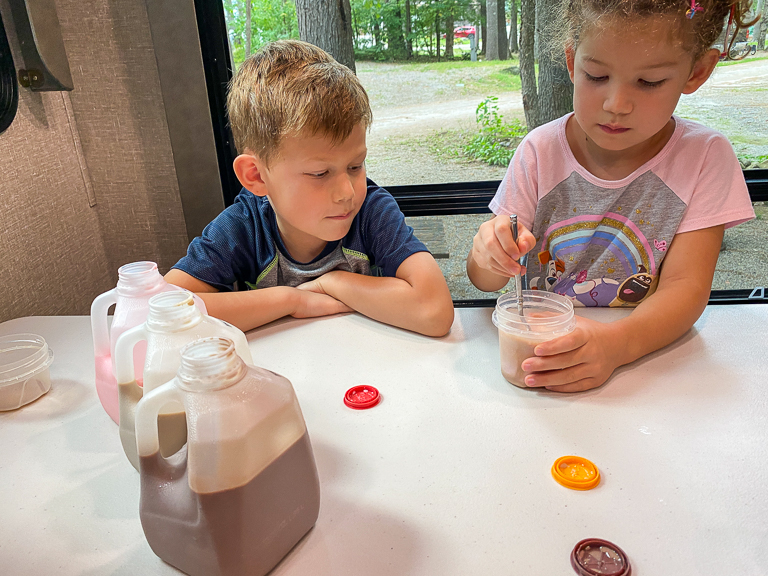 Mixing coffee with anything made it a very subtle coffee flavor. The chocolate was overpowering most all other flavors. 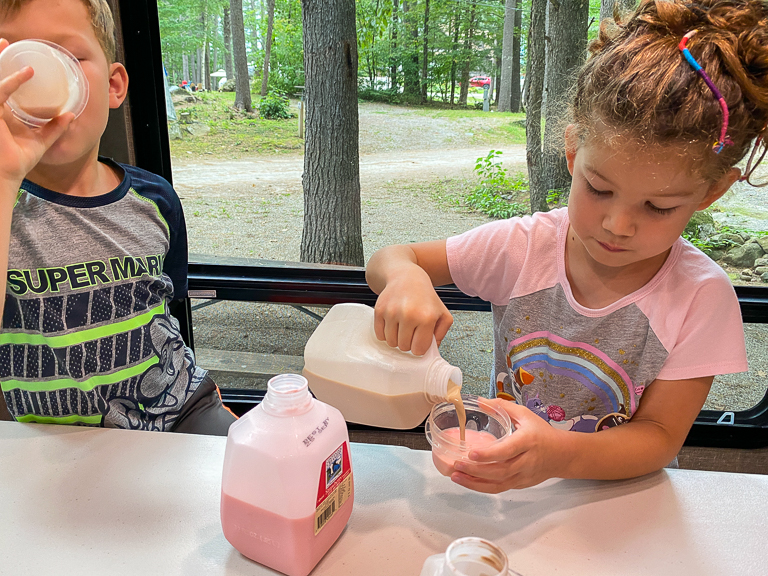 Given the entire list of 7 different combinations, what were the favorites?
Ian loved Chocolate and Strawberry mixed together. 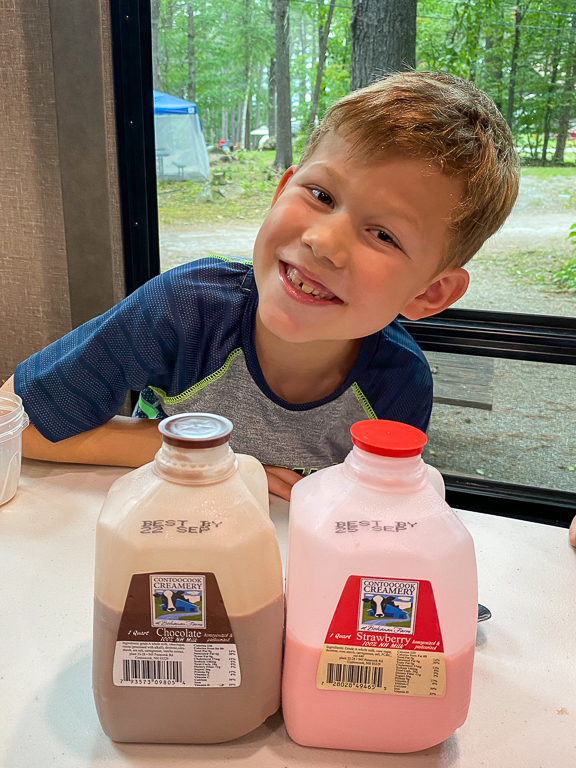 Alli enjoyed a little bit of Coffee flavoring with her Strawberry Milk. 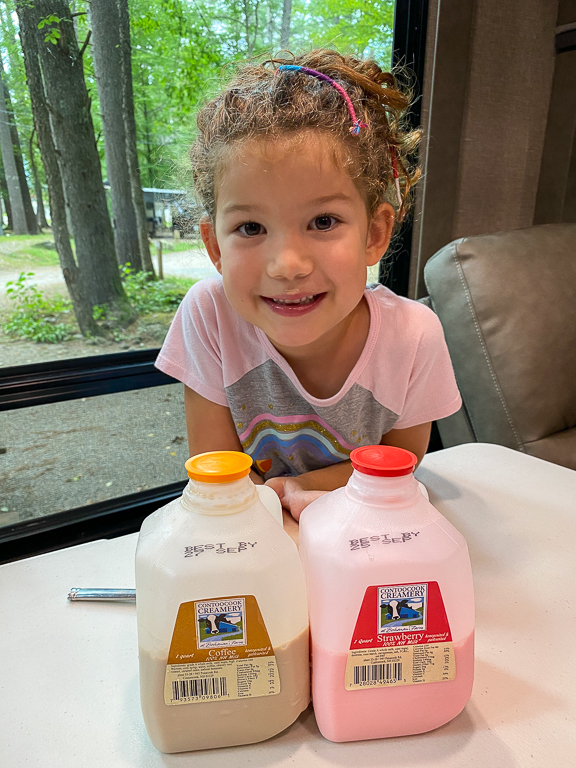 Theresa - The Coffee was the best flavored milk I've ever had.
But if you add just a touch of the sweet Chocolate milk it makes it even better. 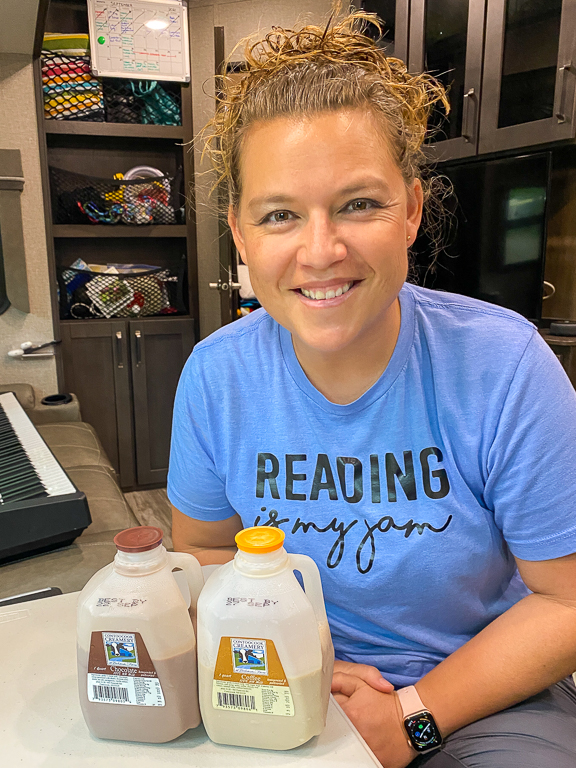 And I thought all the combinations were good, but the best for me was just having the Coffee milk by itself. It was delicious! 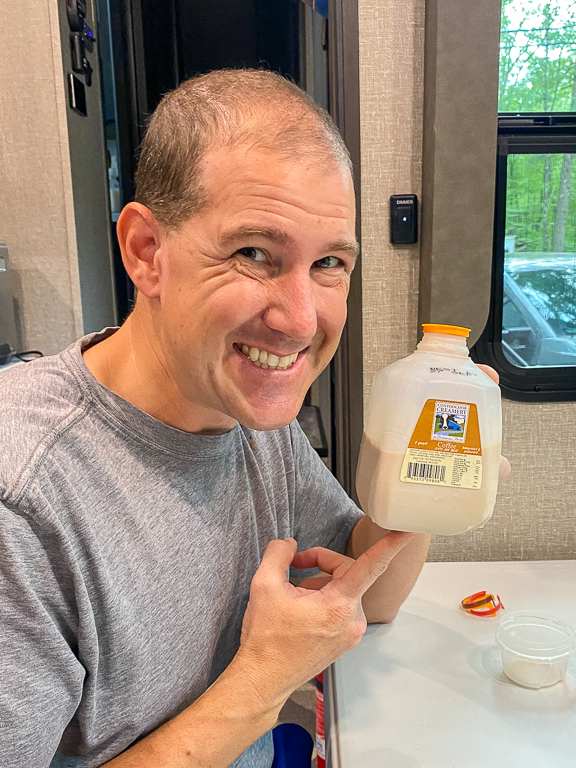 This was a really yummy taste test! The stories were true. This milk was great! Theresa said "Those rivaled the best flavored milks I've tried. I would definitely do that again." 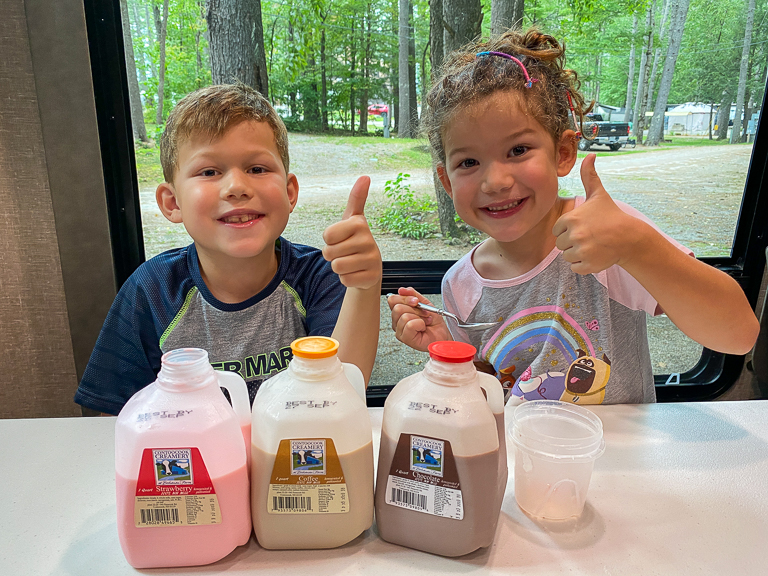