It's been a full day exploring Vermont, but there's one more place that has to be on our list. The Ben and Jerry's Ice Cream Factory! 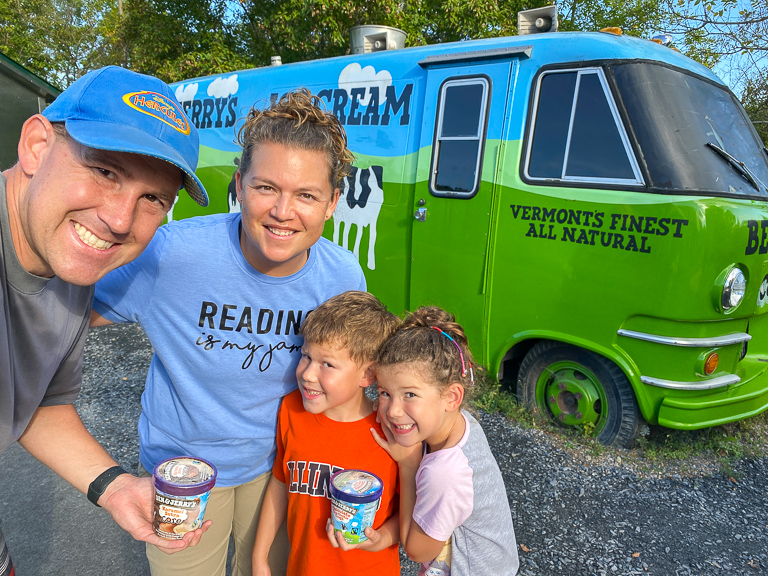 Greetings from Ben & Jerry's in Vermont!
We're in the Waterbury Village Historic District where Ben & Jerry's has their headquarters and also their main factory. 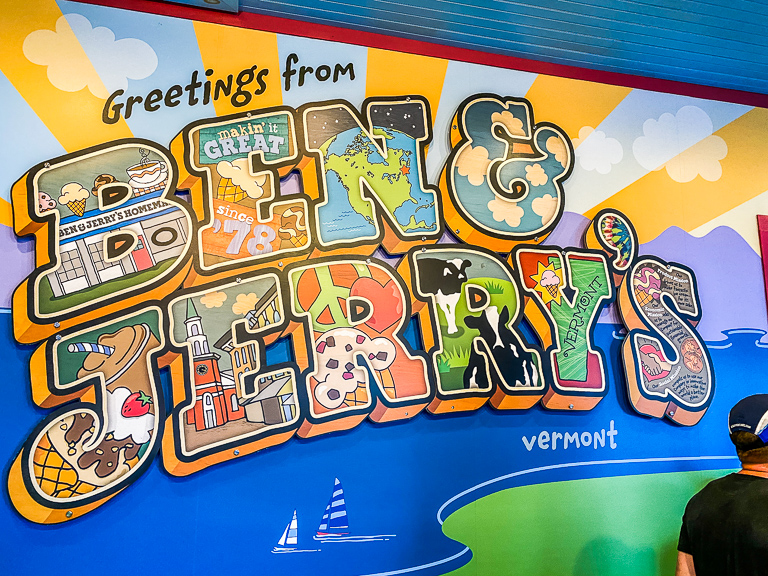 Unfortunately because of Covid, the factory tour, factory store, and samples are all closed. The grounds are still open, as is the Scoop Shop, but I've read some nightmare stories.
Reading a few reviews ahead of time, many people were saying that because the Scoop Shop is the only thing open, it's over-crowded and the line moves super slow. One person said that the line on a Monday afternoon (not holiday weekend) was 90 minutes long! Yikes! The other thing people have been complaining about are the prices. Someone said it cost $15 for two single scoop cones.
What if we did something a little different instead... Not 1 mile from the Ben & Jerry's factory is the Shaw's grocery store. Here they sell pints of all our favorite flavors and it's only $5.49 each. The kids picked their favorite and Theresa and I got ours. 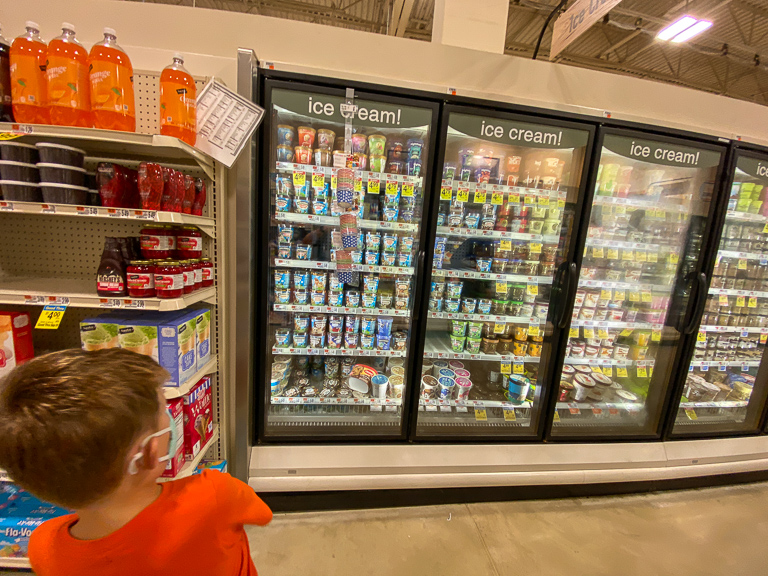 Just up the street is the Ben and Jerry's Factory! I parked in a lot that had plenty of space for my big truck, which I certainly appreciated. 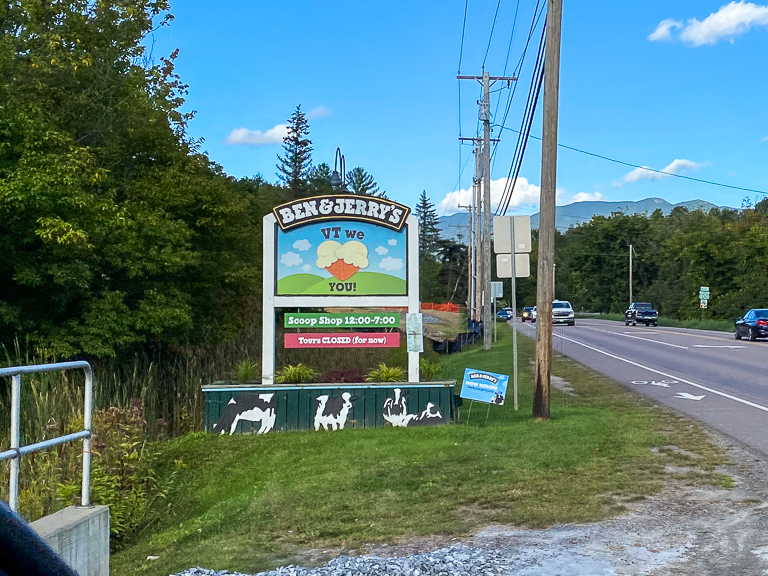 Alli read the tanks about how it was Milk, Cream, and a whole lot of Sugar!
Alli - I like sugar! 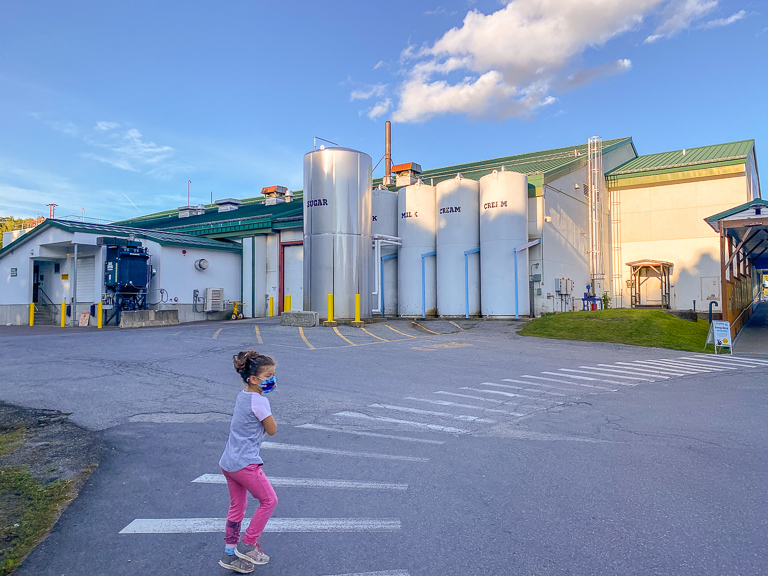 There were markers on the ground showing where the line for the Scoop Shop extends. There was signage that estimated the wait time from this point to be 60 minutes. Along the walls were pictures of some of their most popular flavors. I always thought Cherry Garcia was their top seller, but Half Baked has taken the top spot. 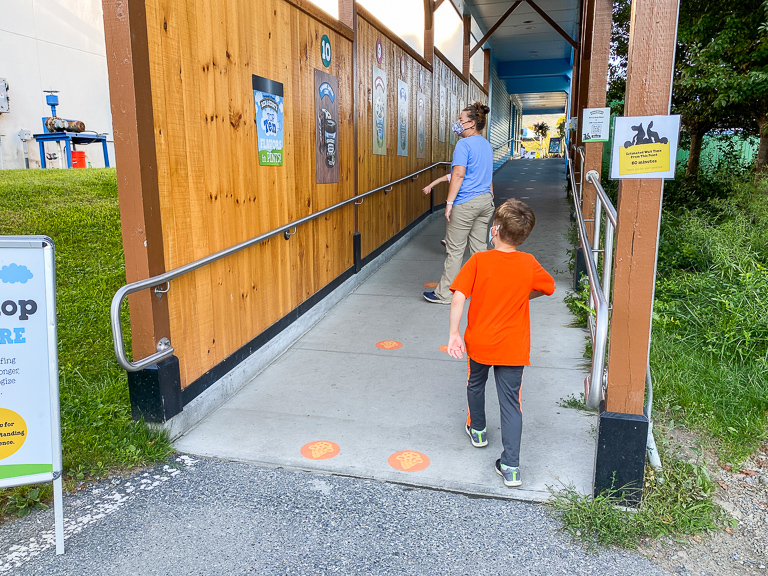 Those massive lines that were claimed just aren't here today. 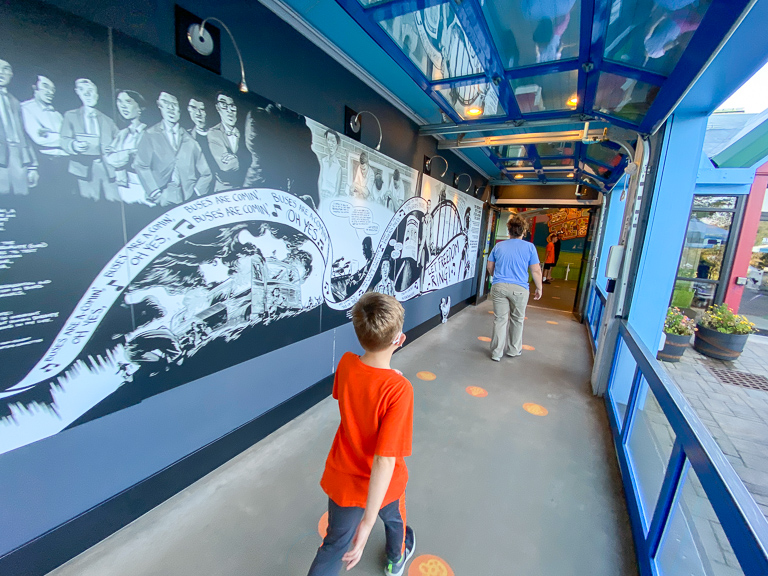 We walked all the way up and had 2 parties in front of us. 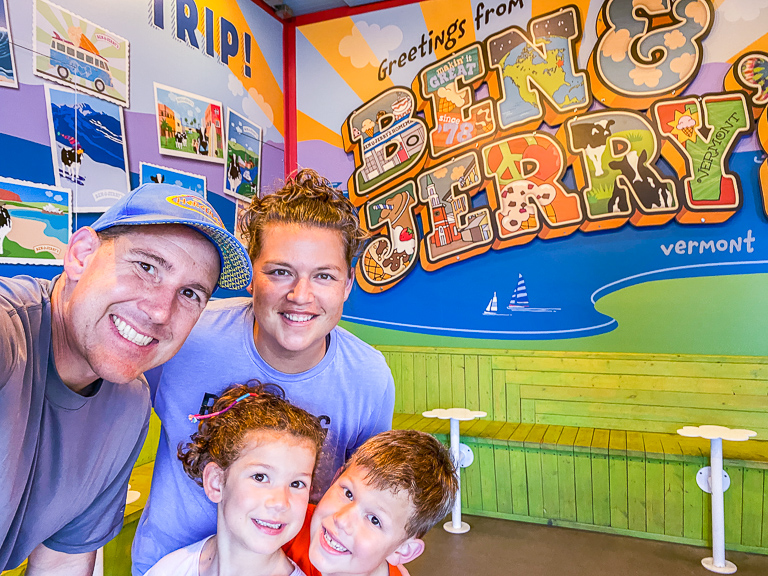 And the prices aren't cheap, but I think it could be worse. It's $5.30 for a small cone. Add $1.63 to make it a waffle cone. Maybe that's where the person got the prices for 2 single scoop cones for $15.
And pre-packed pints are $6.25 which isn't great, but isn't all that bad, considering it's probably 3-4 scoops worth of ice cream.
I do wish that they would have had a unique flavor to the shop. Something you couldn't find anywhere else. 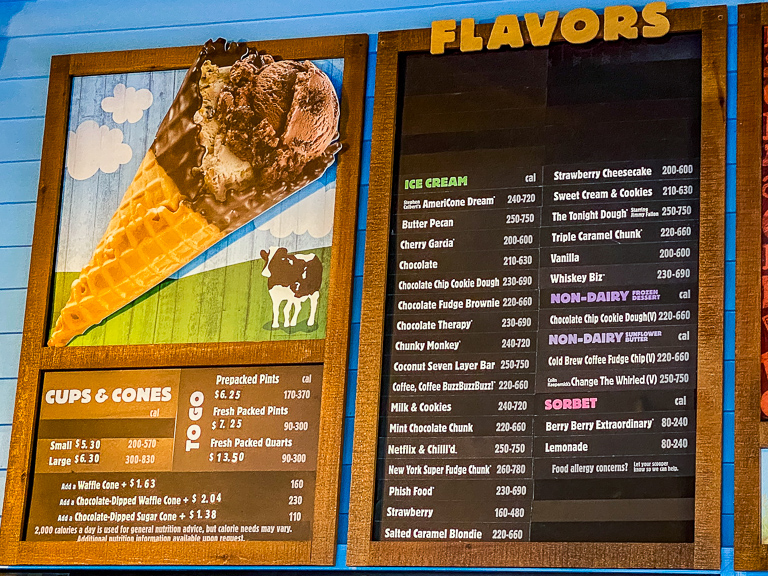 I was tempted to get a Vermonster or even a mini Vermonster. 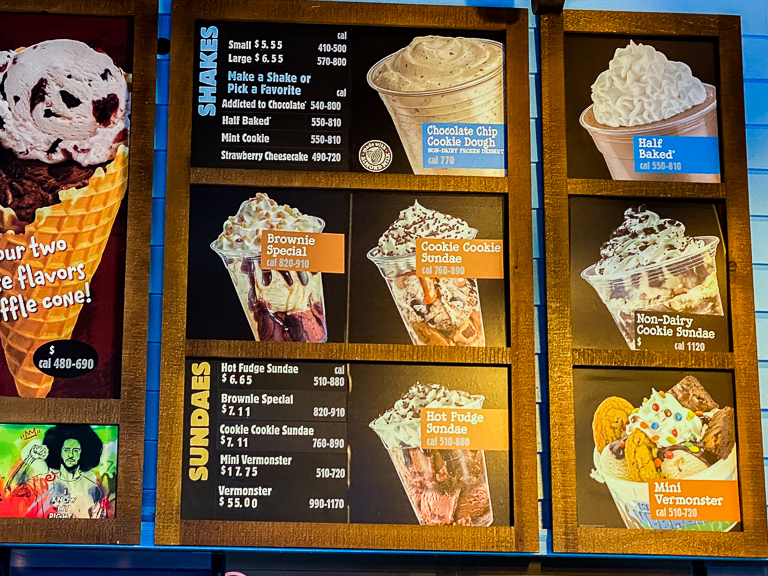 The kids thought it was pretty silly to see a cow snowboarding. 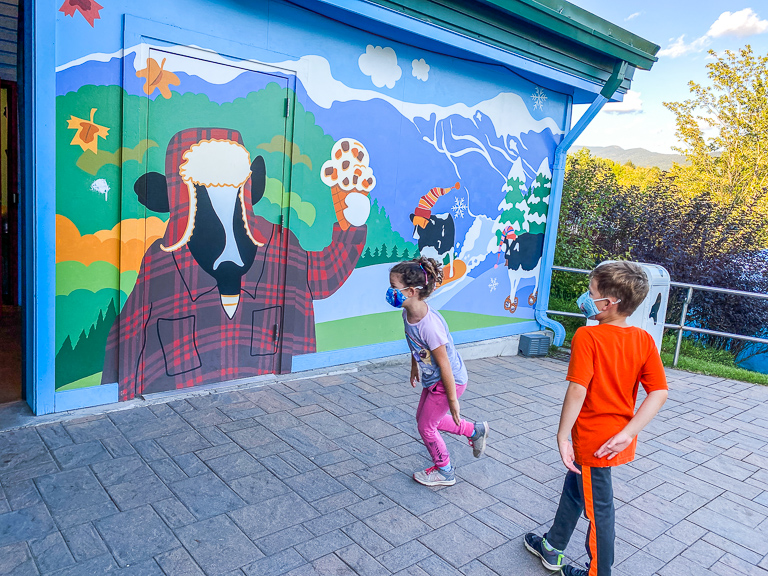 Cows that need gardening shoes are silly too. 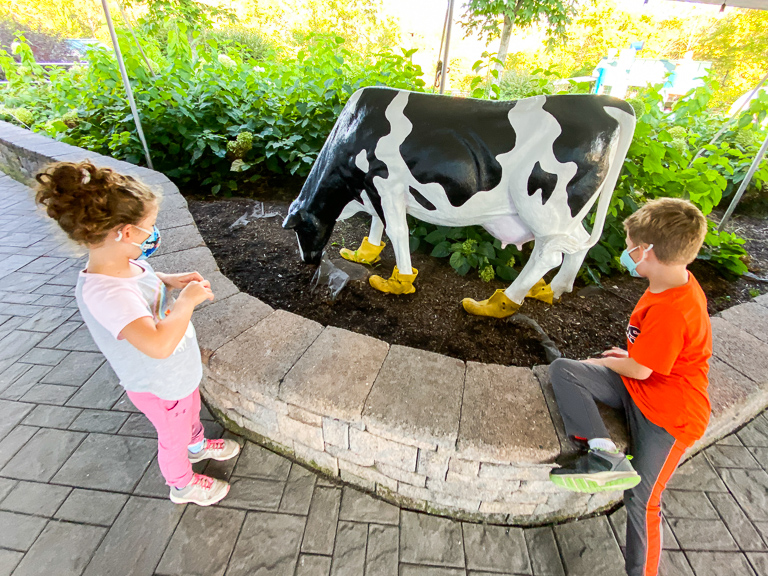 Alli - Which one is the girl?
Sorry Alli, they're both boys. In 1977, childhood friends Ben Cohen and Jerry Greenfield completed a college correspondence course on how to make ice cream. The next year, they opened their first ice cream parlor in a renovated gas station. 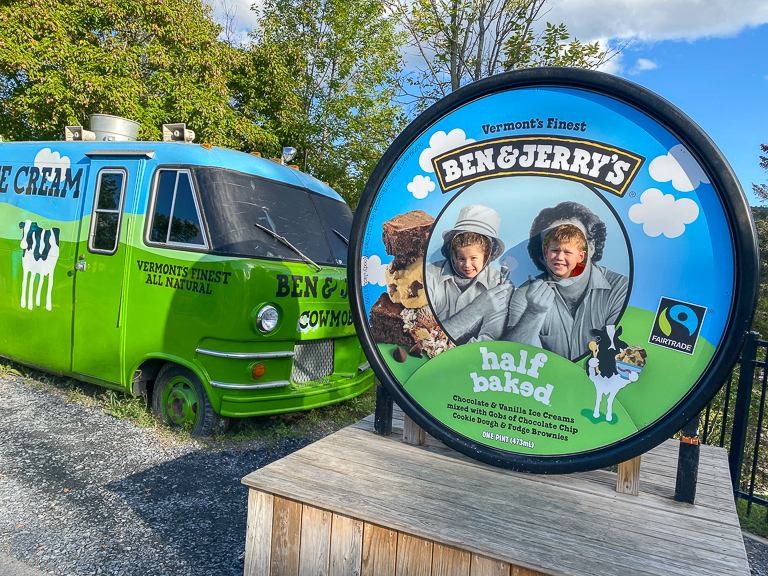 I guess the giant ice cream lid has changed since 2008. When we were here back in 2008, this was Chocolate Chip Cookie Dough. 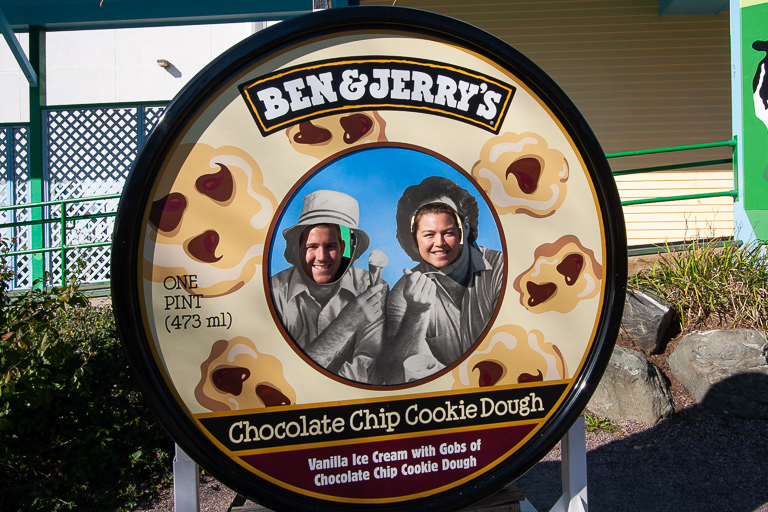 Theresa - Are we waiting for anything else before we can start eating our ice cream?
Theresa doesn't like her ice cream to be soft, and we're wasting precious time. Yes, let's go find some pleasant place to sit down and eat it. 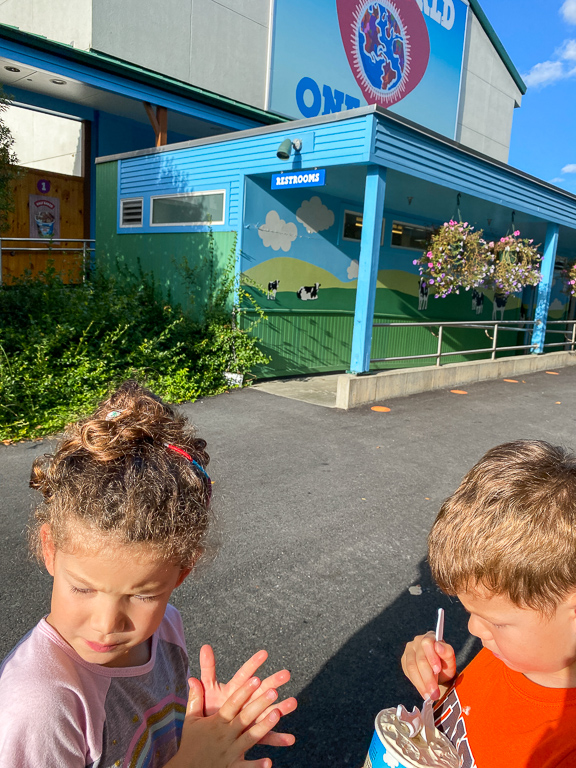 Up on the hillside, looking towards the factory, and towards the mountains beyond, they've set up chairs. That'll work. 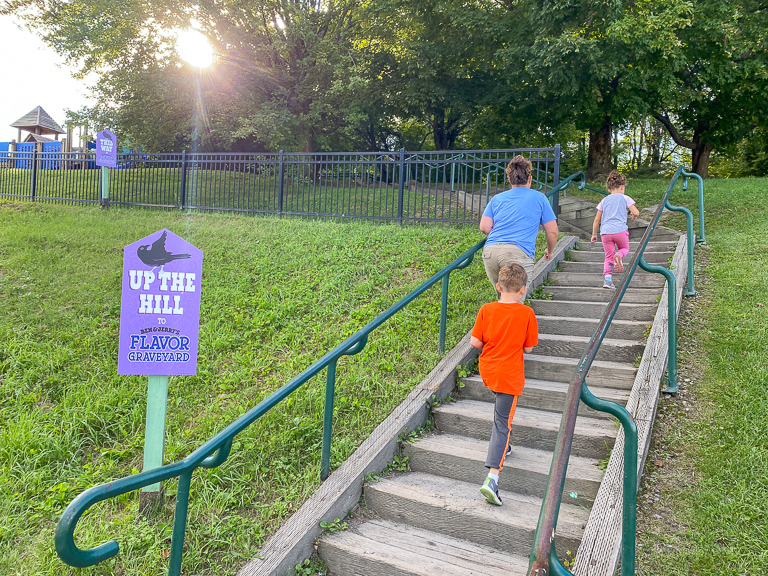 My favorite Ben & Jerry's Ice Cream isn't one I can find all that often. But back during my early days in California, I always made sure to have a pint of Karamel Sutra in the freezer. Added to the lineup in 2002, this ice cream combines Caramel and Chocolate Ice Creams with fudge chips, and a soft Caramel Core. There's a mixtures of flavors and textures and it's my favorite. 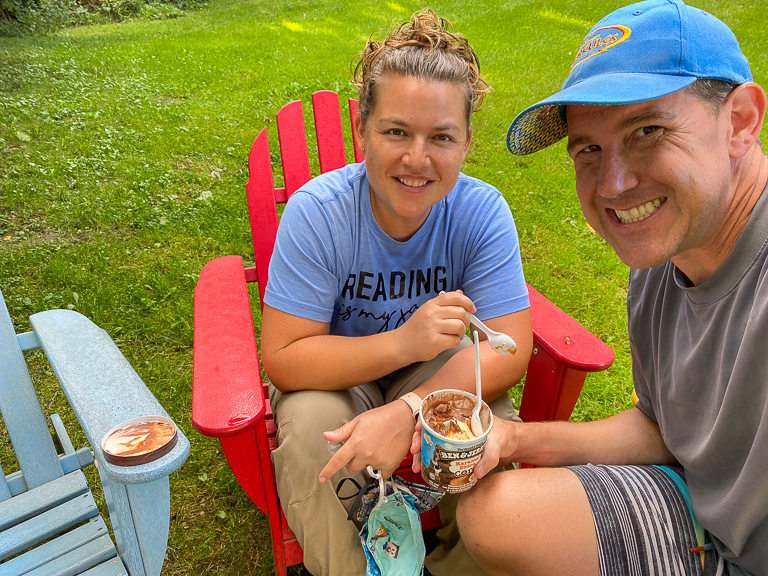 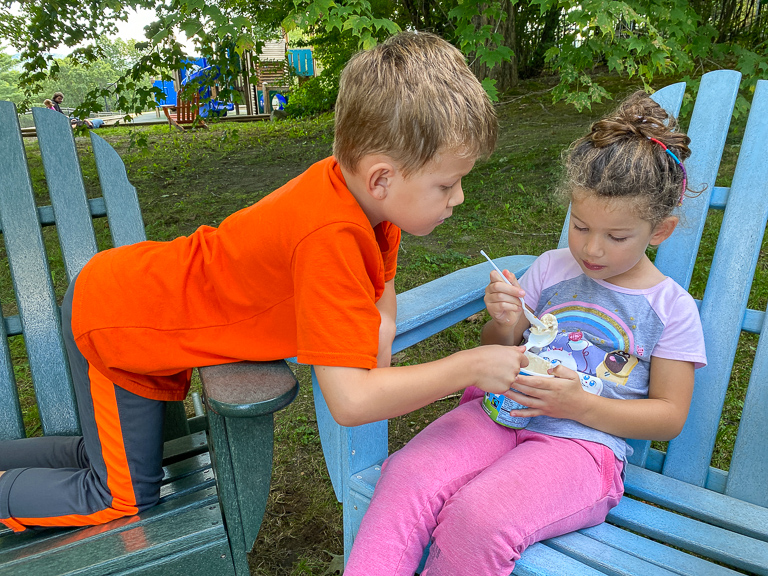 These pints of ice cream are not low calorie by any means. Each pint contains 1100 calories! Better work off some of those calories on the nearby Ben & Jerry's Playground. 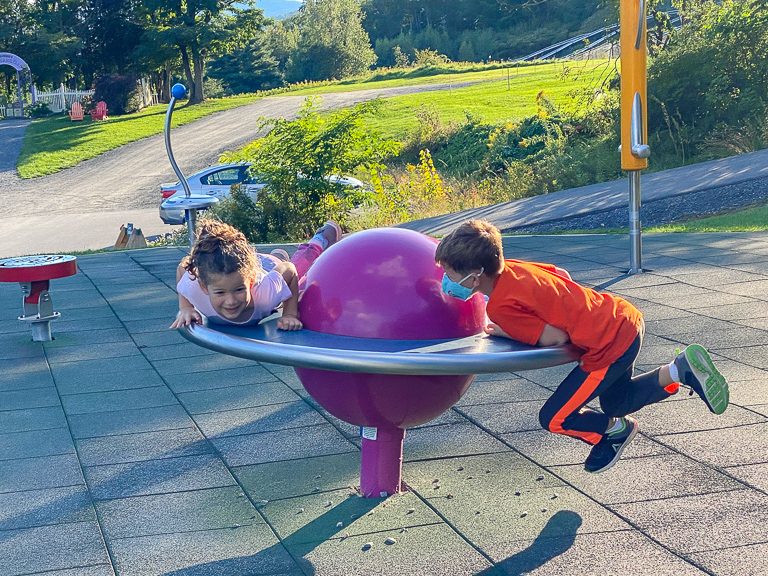 Anything that spins or that they can climb is a win for them. 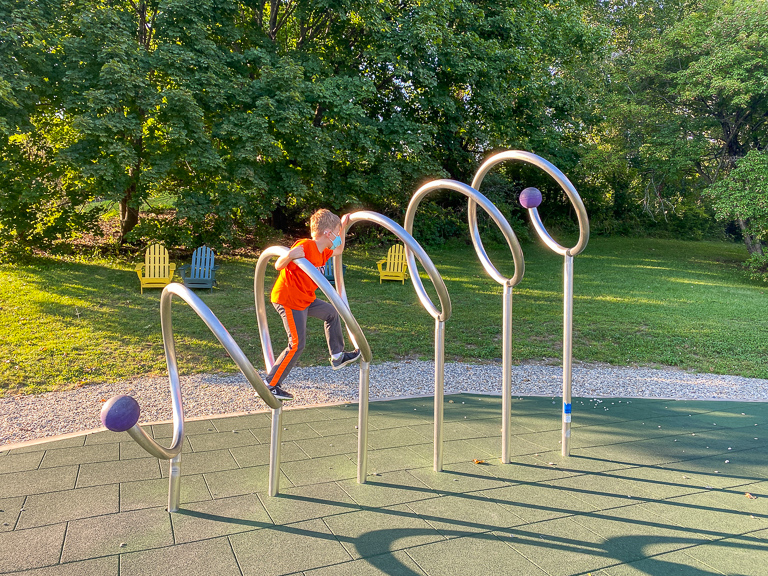 There's even a merry-go-round with a fixed disk in the middle where they can spin themselves. 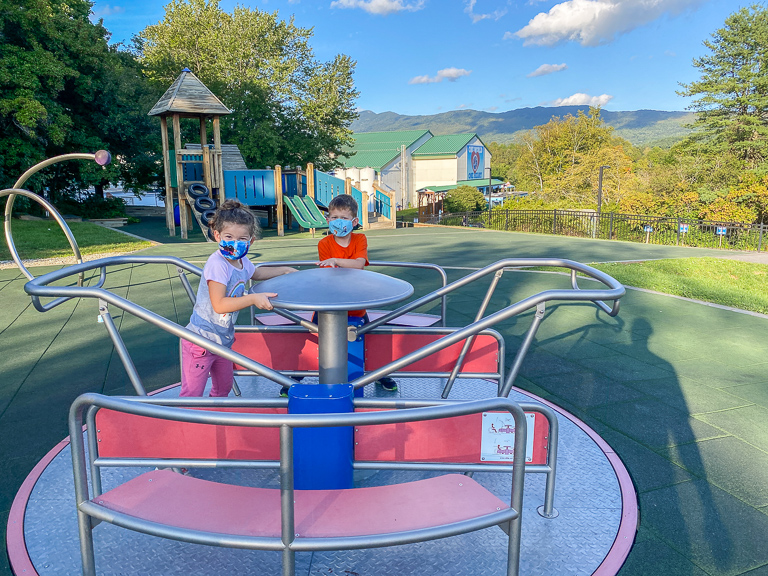 Ben & Jerry's makes a ridiculous number of flavors. Over 80 that I see! 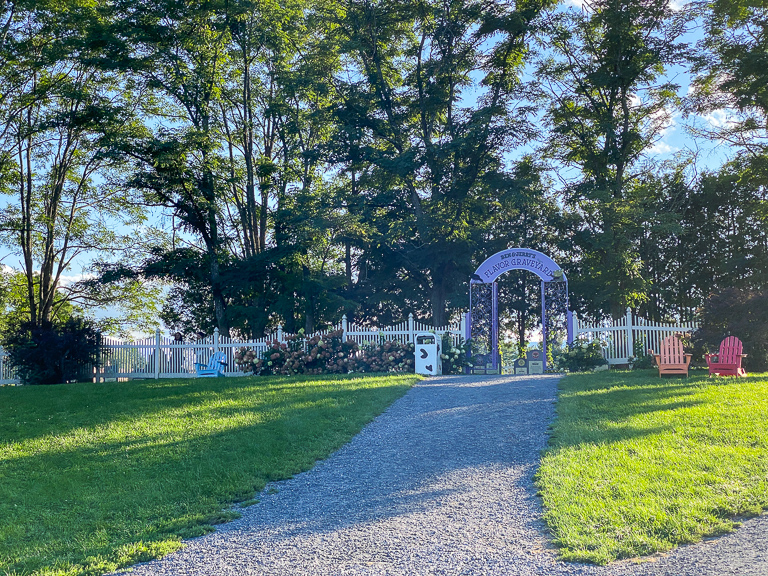 But sometimes for whatever reason, a flavor doesn't work out. In those cases, a flavor moves to the flavor graveyard. A fitting tribute and a good final resting place. 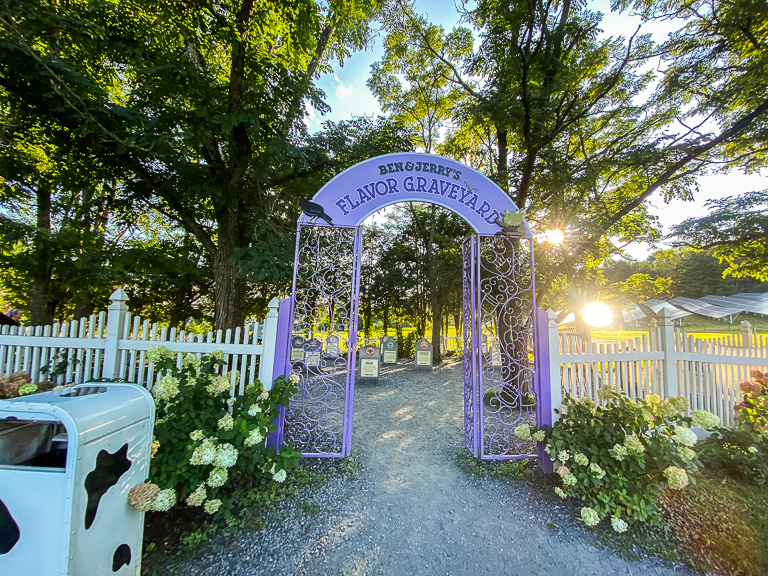 On each tombstone is a witty epitaph, usually about why the flavor didn't work out.
Like an ice cream named Peanuts! Popcorn! that only lasted 1 season in 2000. Peanuts, Popcorn! Mix 'em in a pot! Plop 'em in ice cream! Well, maybe not. 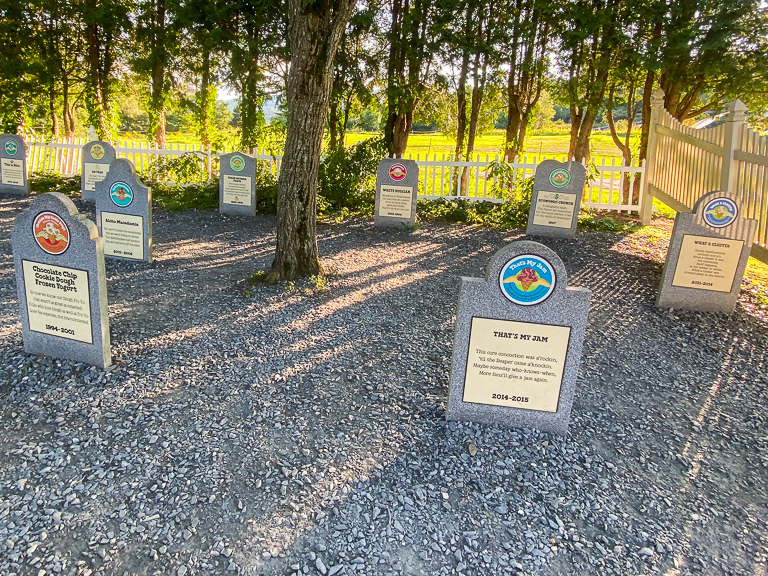 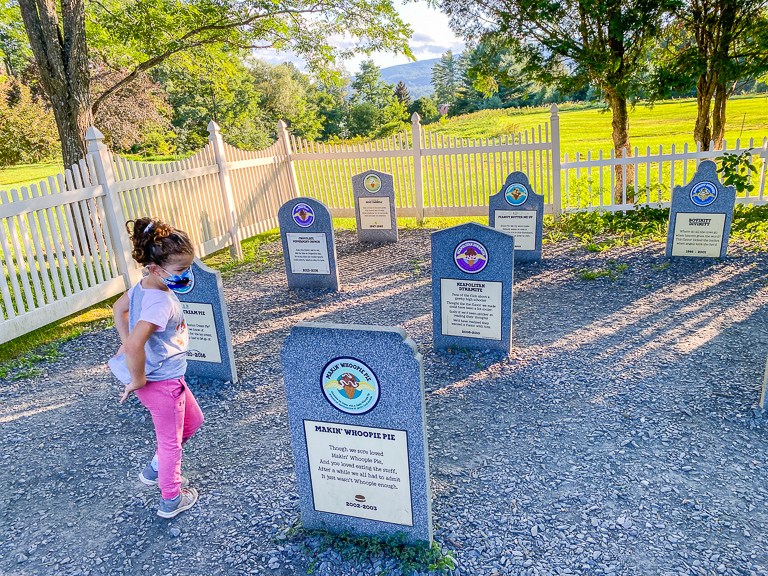 Neapolitan Dynamite, maybe they should have made it flavored with tots. 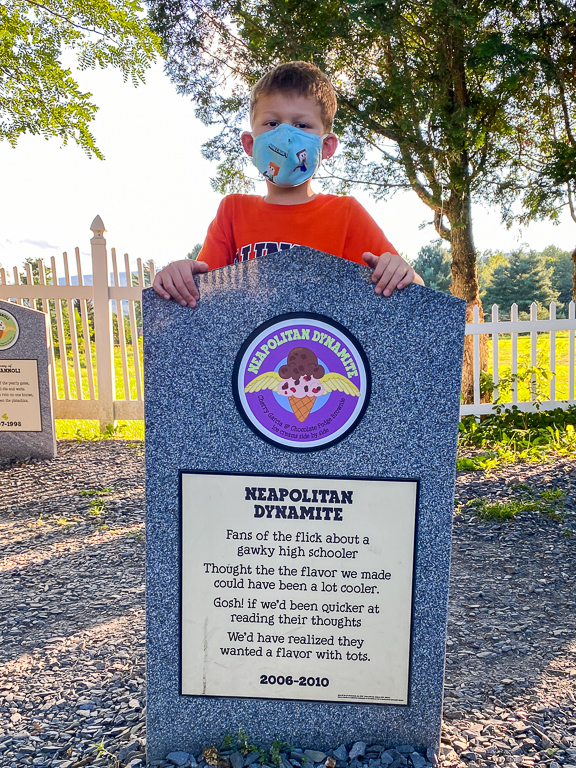 I mentioned that my favorite flavor since getting to California was Karamel Sutra. Theresa's favorite though was something different. Oatmeal Cookie Chunk had Sweet Cream Cinnamon Ice Cream with Oatmeal Cookies and Fudge Chunks. I do love Cinnamon Ice Cream and it was one of my favorite flavors too. Sadly, so the story goes, in 2012, the company that provided the Oatmeal Cookie pieces for this ice cream stopped production. Without the cookies, this ice cream just couldn't continue. 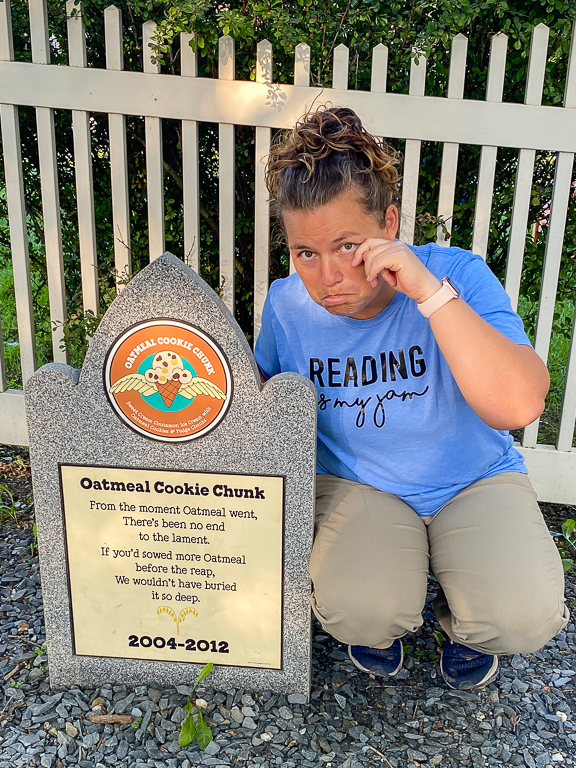 It's time to go guys. Gotta head back home.
Alli - Can we play on the playground for just a little bit longer?
Sure. You guys have been great all day.
Alli is being Supergirl on the Saturn spinner. 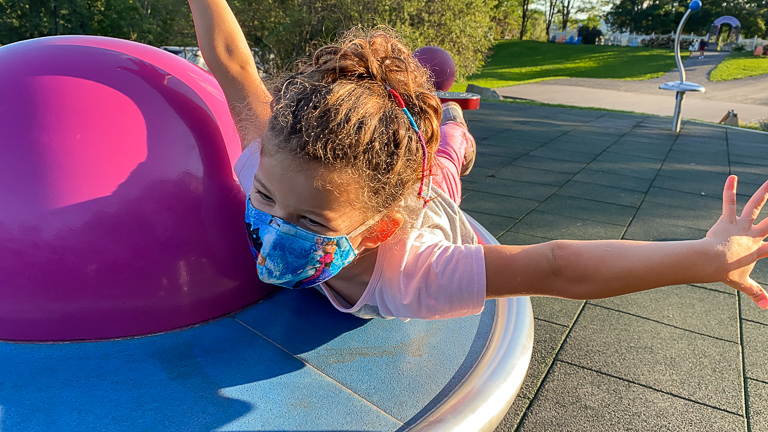 That's a high jump!
On the way out of the parking lot, the neighbor next door has a few cows in their pasture. The kids were wondering if these cows provided any of the milk for the ice cream next door.
Alli - Ben and jaress - We ayt ice cream. We went to the park. We went to the ice cream graveyard. I felt good. My ice cream tasted good. I got chocolate chip cookie.
Ian - Ben and Jareise - My favorite part was The swirling jump. My ice cream was cocie dough. Mom tolk a sad picture with her favorite ice cream. It is fun. 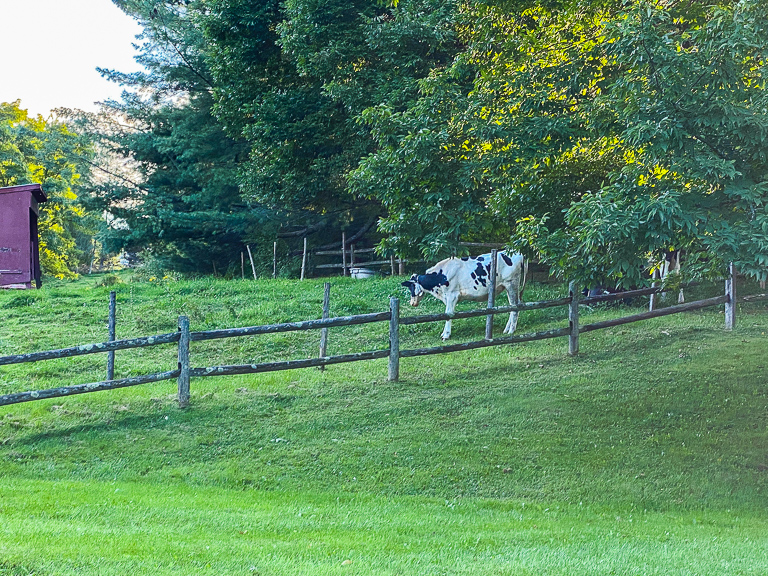 It's been a long, but very fun and full day. We've gone to the Cold Hollow Apple Cider Mill, Shelburne Farm to see cheesemaking, and the Ben & Jerry's Ice Cream Factory! Whew! 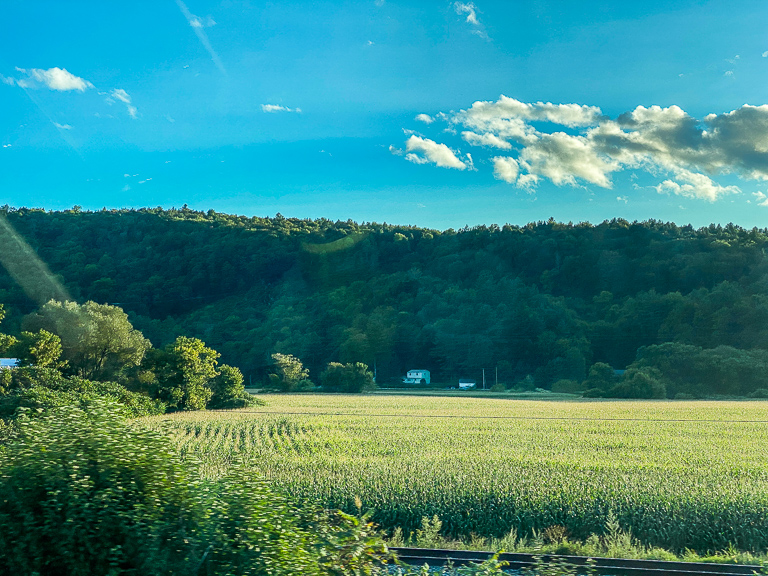