Visiting the Lewis and Clark Salt Works and making homemade salt ourselves!

Welcome to Seaside Oregon! While walking along the Strand by the beach, we noticed that just off the path was a very very small National Park Historic Monument. It's the Lewis and Clark Salt Works! 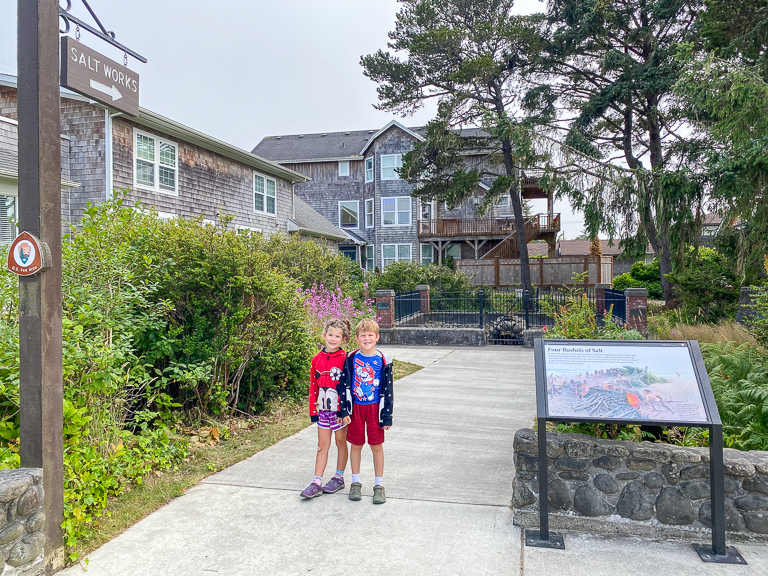 Just up the coast at Fort Clatsop, where I visited with my family a week ago, was the winter home of Lewis and Clark and their men, after their expedition to find a path to the West Coast. During their journey, they ran out of salt, a necessary provision for preserving meat. Just past that green grass is the Pacific Ocean. 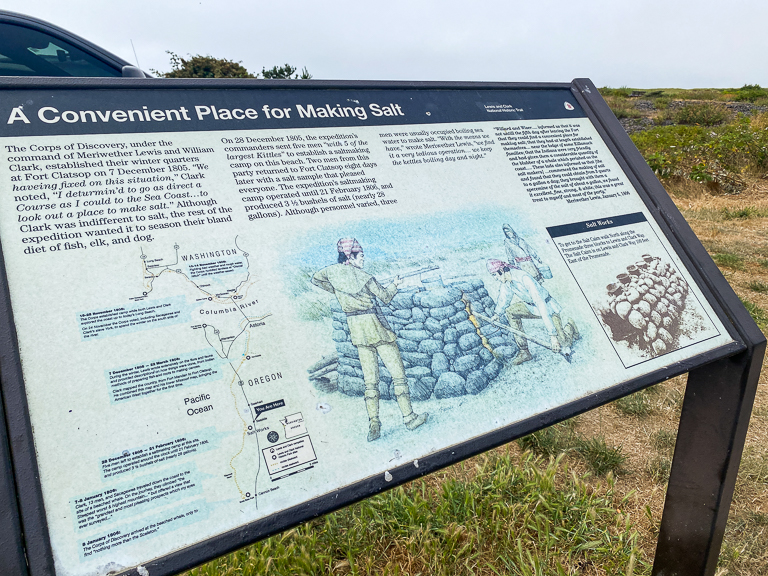 It was on this site, back in the winter of 1806 they they boiled sea water for weeks. 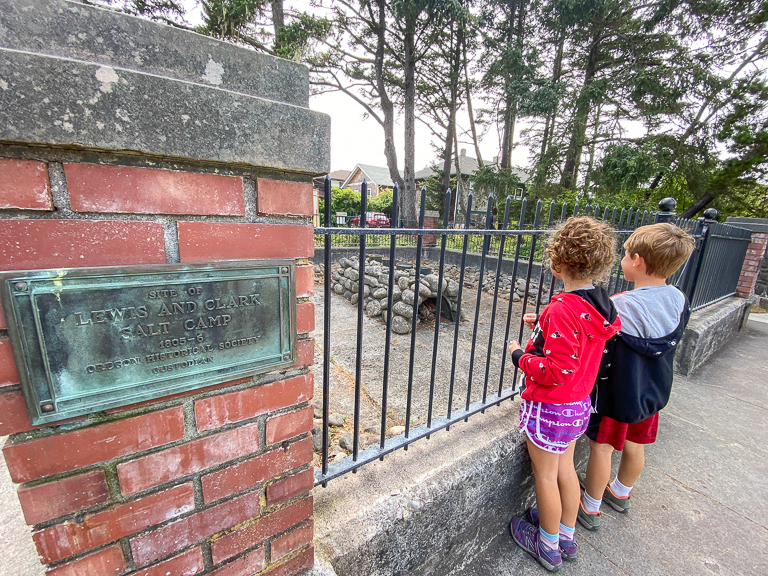 And boil away they did, making enough salt to fill 3 1/2 bushels, or 28 gallons. 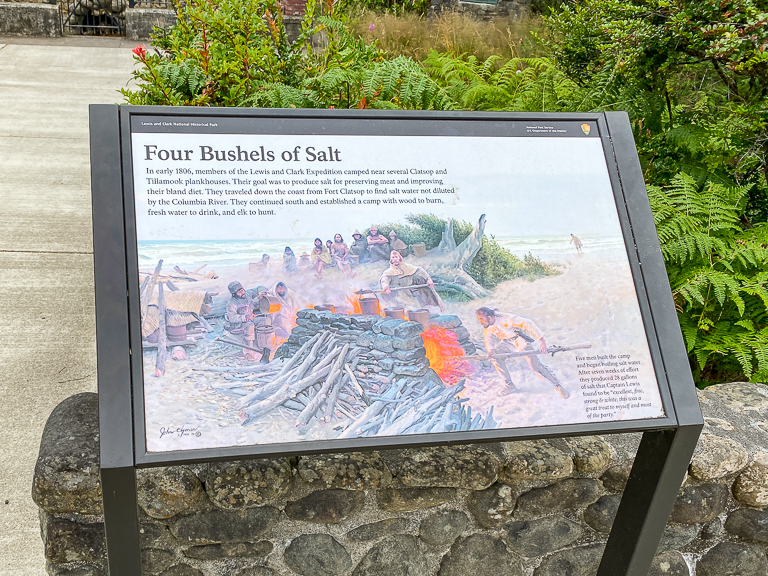 Lewis and Clark Salt Cairn - On January 2, 1806, the salt works was established by the three "salt makers" of the Lewis & Clark expedition, Joseph Fields, William Bratten, and George Gibson, who remained here until February 20, 1806. These men, assisted at times by hunters and packers were able during this period to tediously extract approximately four bushels of salt by boiling the seawater day and night in five metal "kittles". The expedition had run out of salt before arrival at their winter camp at Fort Clatsop, 10 miles to the Northeast, and it was very necessary for curing meat and preparing for the return trip to civilization. 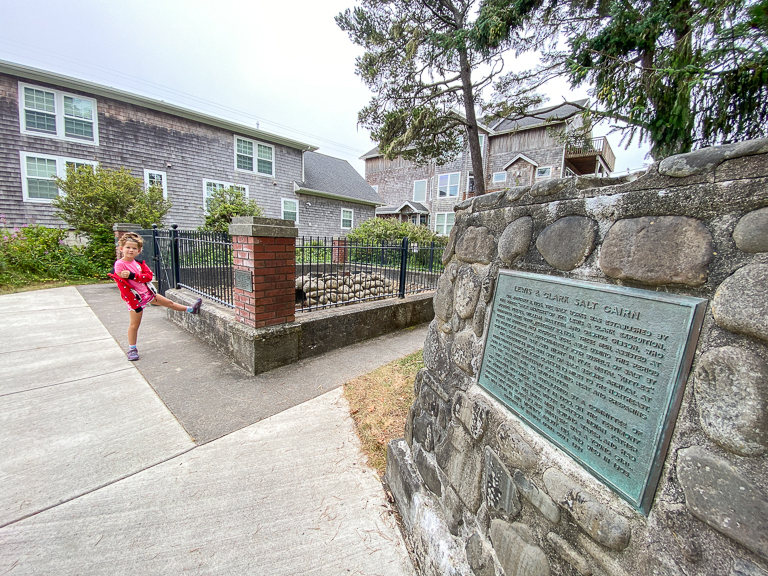 Pretty cool to see!
Alli - Daddy, can we make salt?
You know what? That sounds like a fun, hands-on learning experience. Bringing history alive. Let's do it! 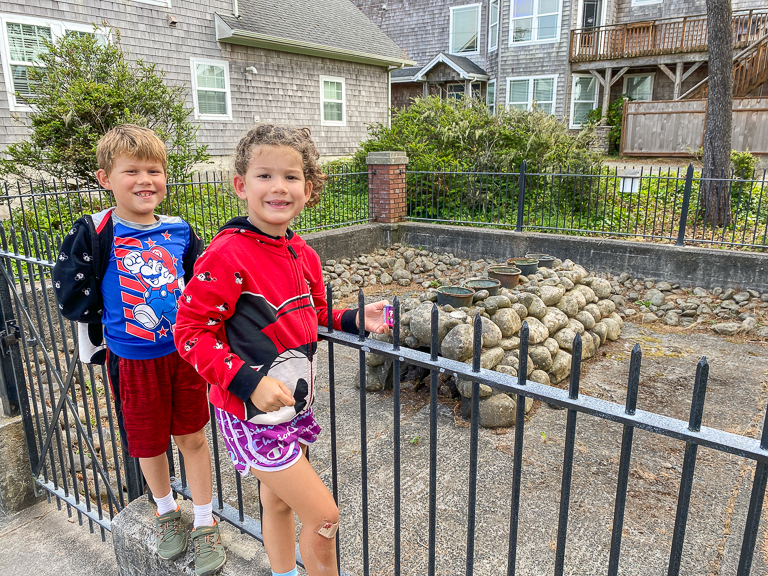 We gathered as many containers as we could find, rinsed them out well, and headed to the ocean to fill them up. All told, we had about 6 gallons I'd estimate. 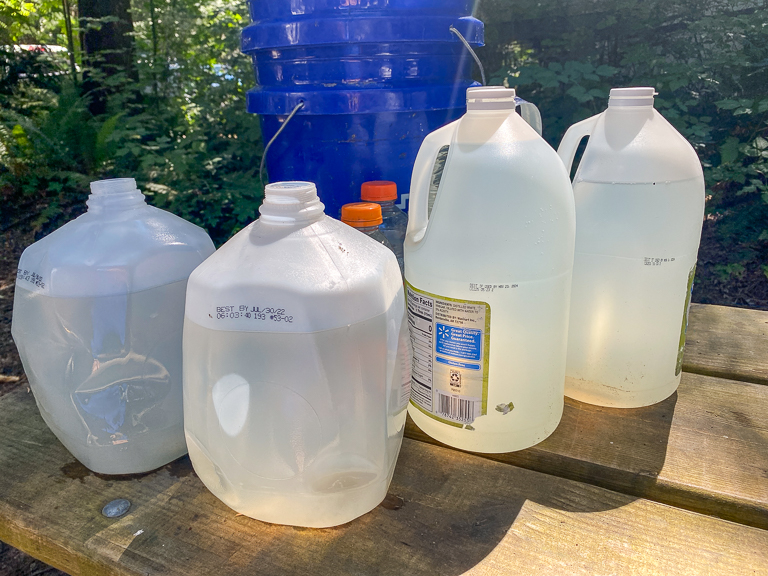 I didn't have a large boiling vessel, so we hit Goodwill to find something appropriate. And I didn't want to risk messing up one of our nice pots. The electric burner is going to come in useful to keep me from having to burn propane to power this thing. 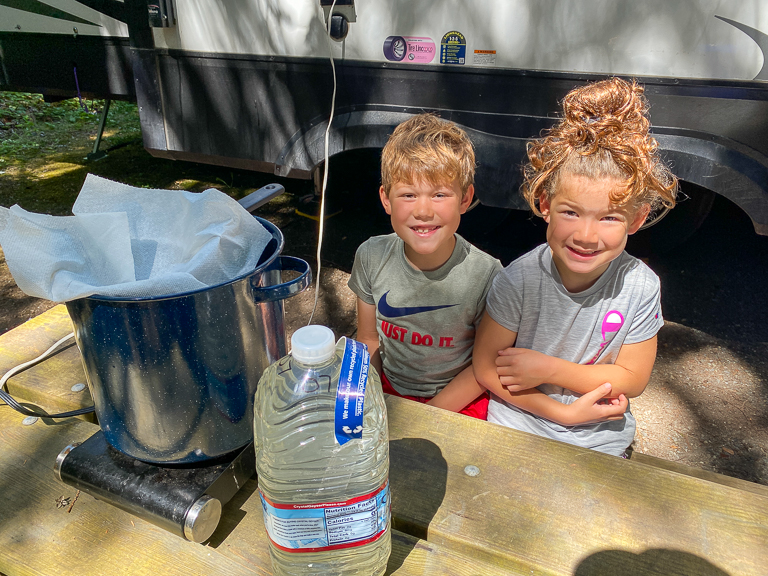 The seawater got filtered through paper towels before boiling to filter out and large particulates. The dissolved salts should pass right through.
There's actually a good reason the Lewis & Clark expedition went so far to the south from Fort Clatsop to establish the salt works. Their party was following the path of the Columbia River, a fresh water river, and when it met up with the ocean the two waters mix and the amount of salt in the water is diluted. 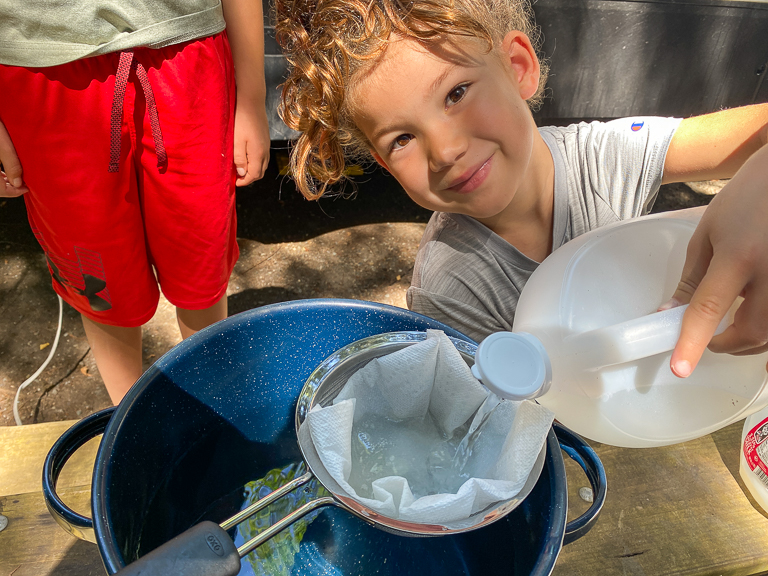 Full pot, which will need to be refilled a few times. 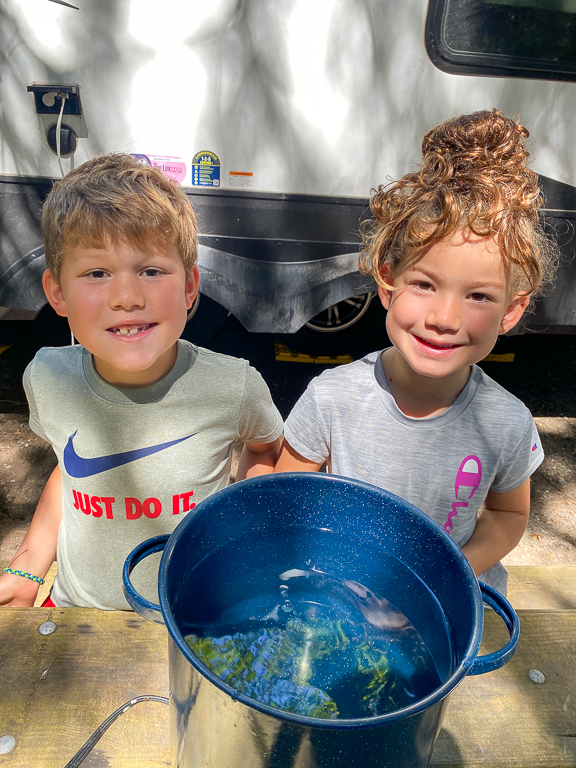 And now we wait. 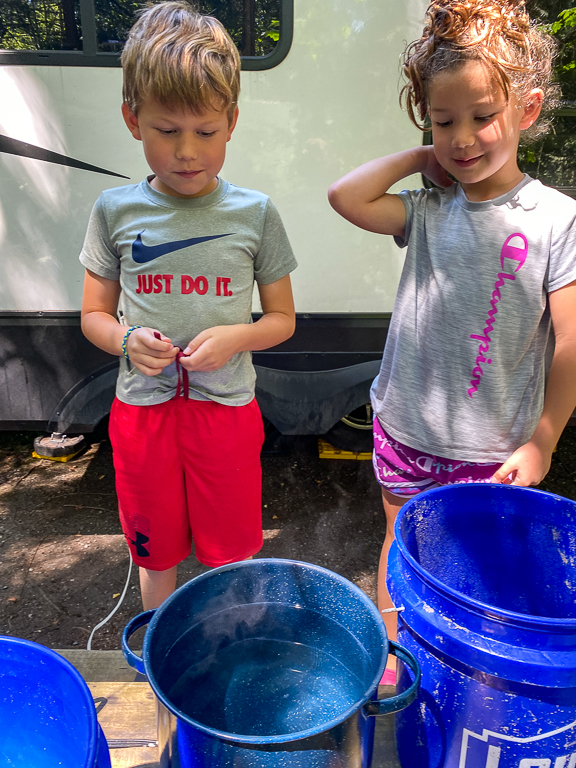 Because this was outside, I made sure to cover it loosely to prevent anything from falling into the top. There's nearby trees, and as we were getting set up, we could tell something would need to be done. Otherwise this might have a boiled evergreen flavor! 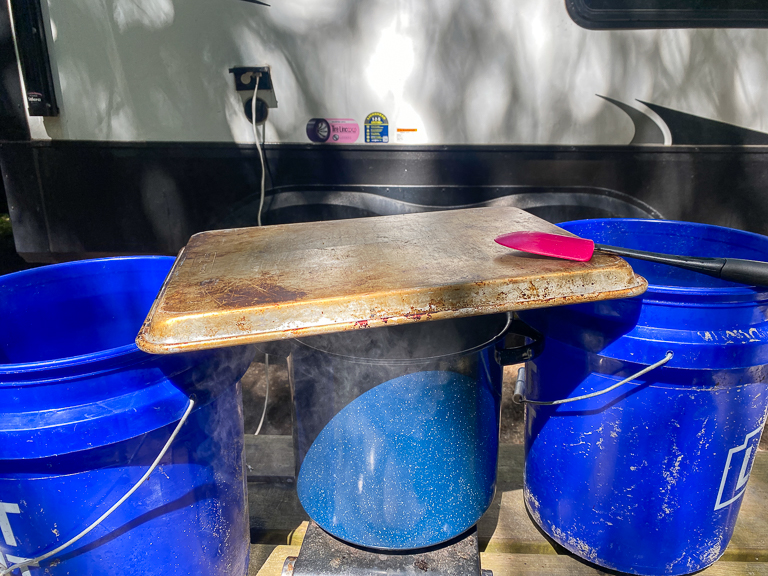 I'll save you all the in-between steps. This was a very long process. We don't have rip roaring fires like the Salt Works had. We just have a small stovetop burner that takes a while to transfer the heat to the water. As the water got lower in the pot, I would add more, and it would start the boiling process all over again. And looking into the water each time I added it, I still wasn't seeing salt crystals. That is until day 4 when I was all out of water to add and let it start boiling all the water away. 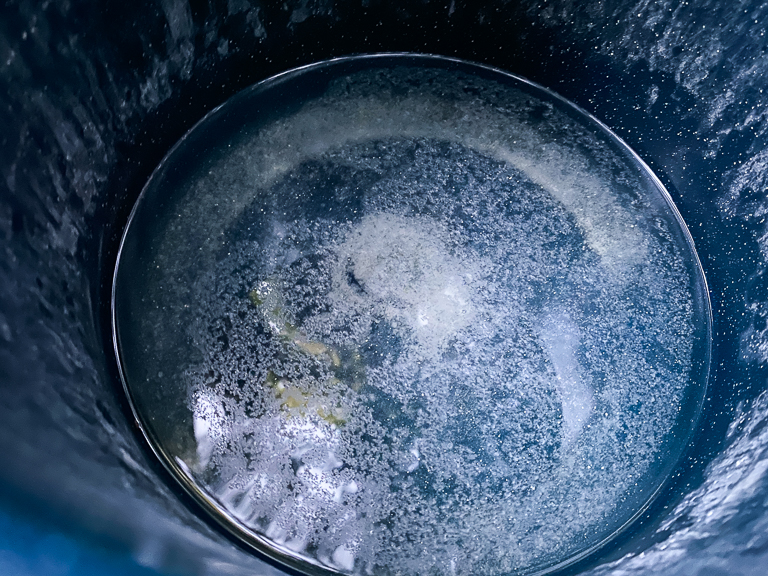 There we go! That's the salt we've been looking for! 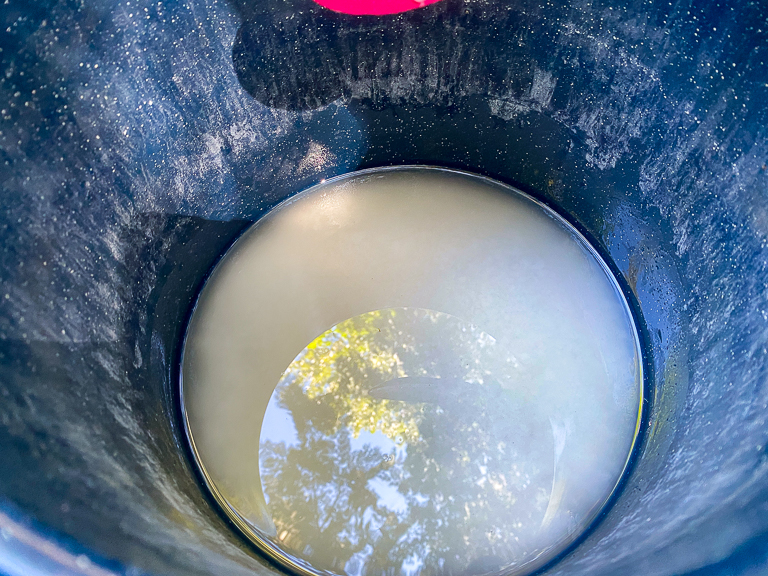 Ian and Alli were excited to see the results of their homemade salt experiment! 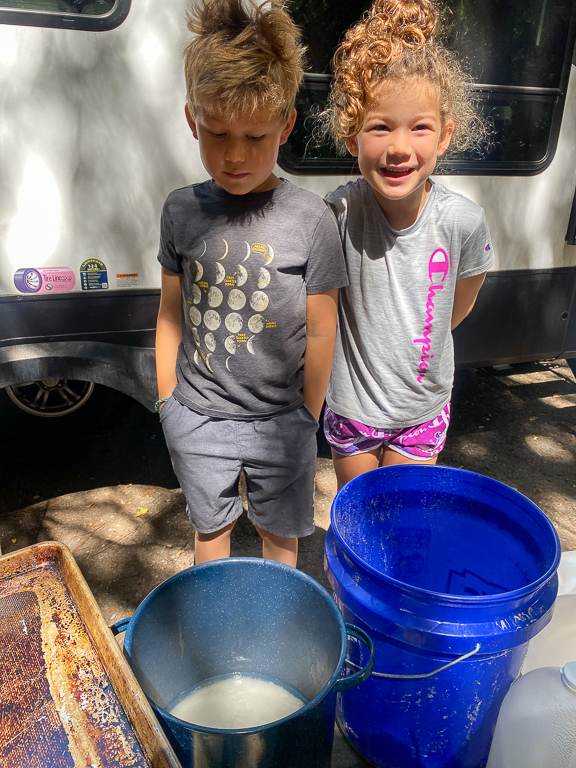 It is possible to burn salt, according to what I read, so I turned the temperature to low to hopefully get some of this excess water out. 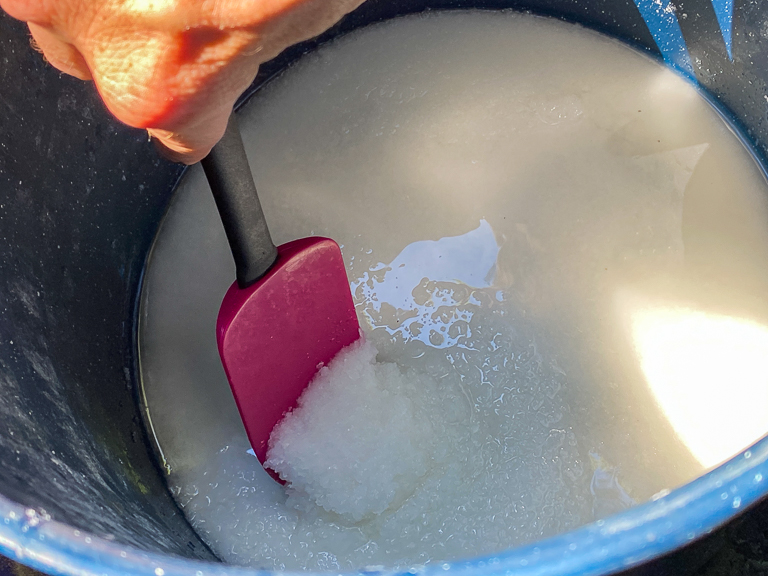 I then transferred it to a parchment lined cookie sheet. 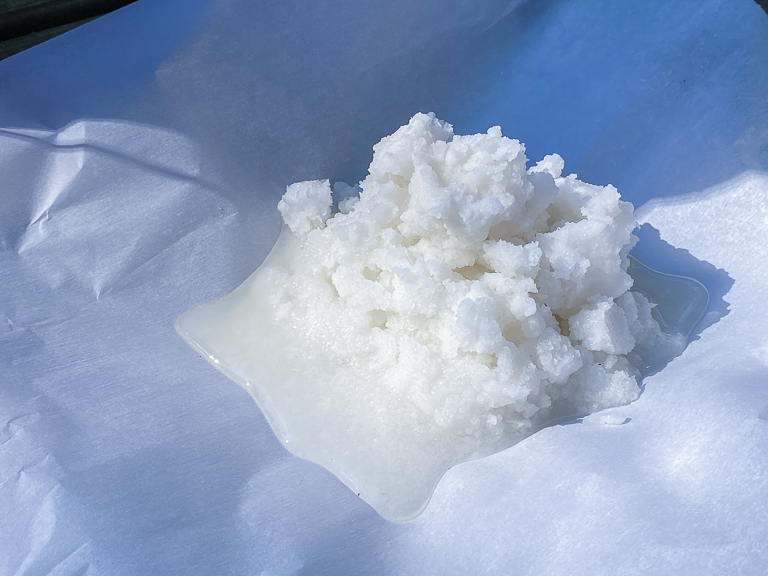 And to speed up the dehydration process, put it in our oven at 125F until things started to dry out. 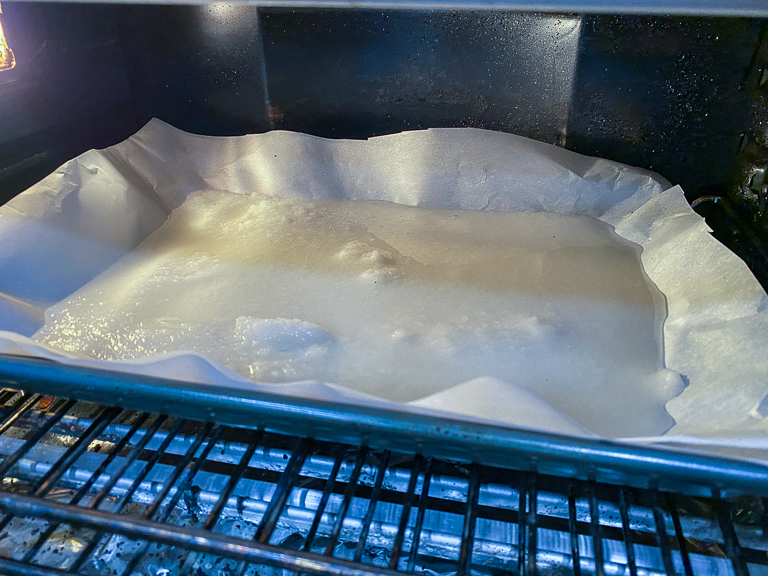 And success! We have salt crystals! 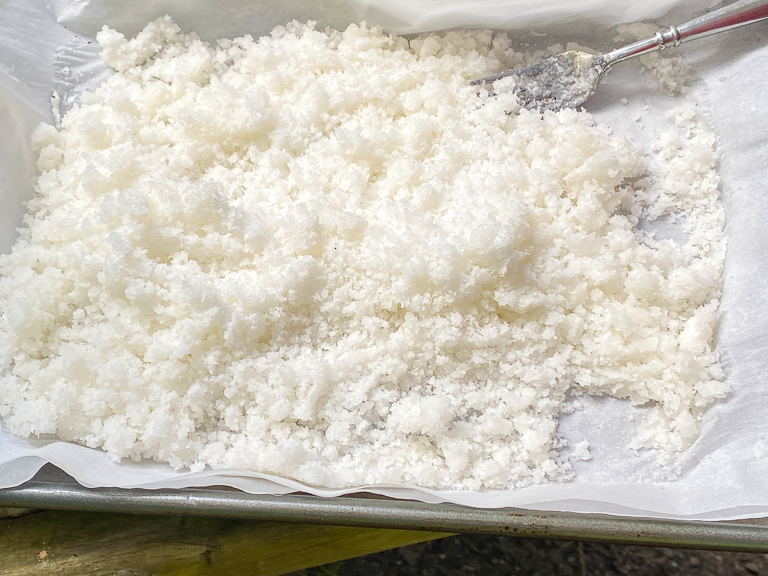 Congratulations kids! You just made your own salt! Just like the Lewis and Clark Expedition! 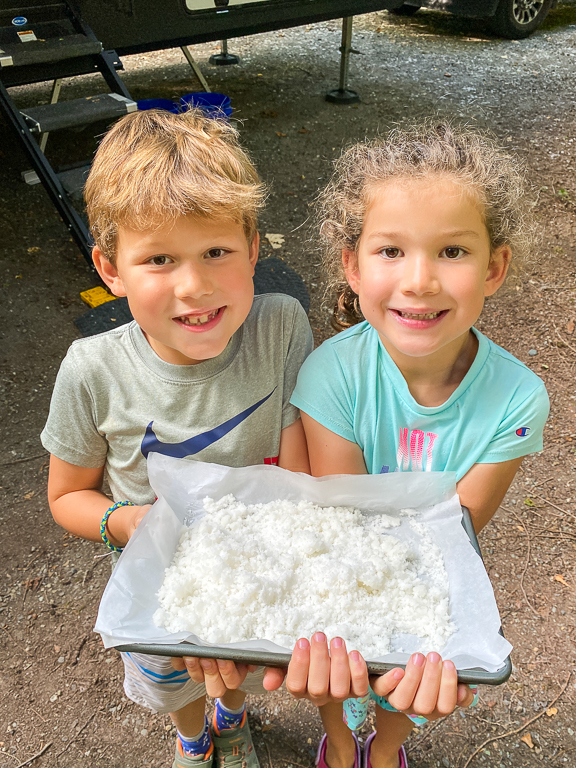 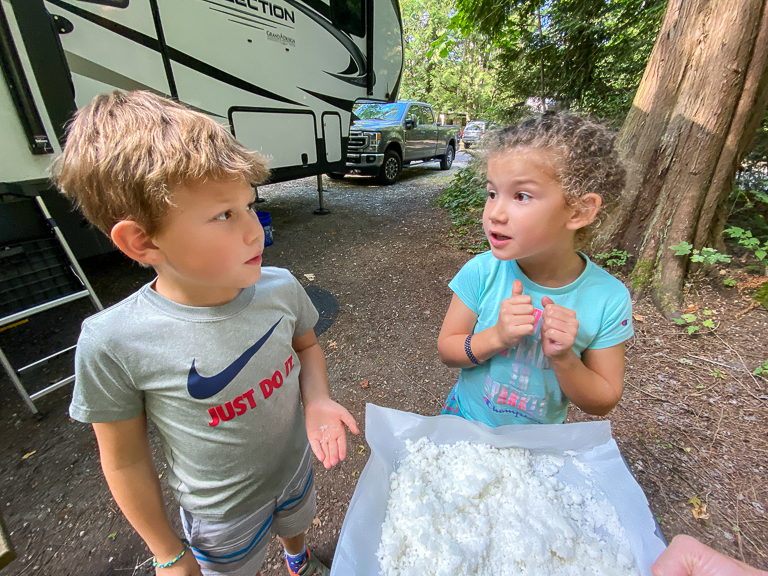 Our 6 gallons of water boiled down to make almost a pound and a half, 21 ounces, of salt.
Ian asked if we saved money by making it ourselves. Sorry to say, but no, we didn't save any money. You can buy salt very cheaply now at 26 ounces for just $1. This is the very first time I've made my own salt too! I'm glad you guys had fun and learned something! 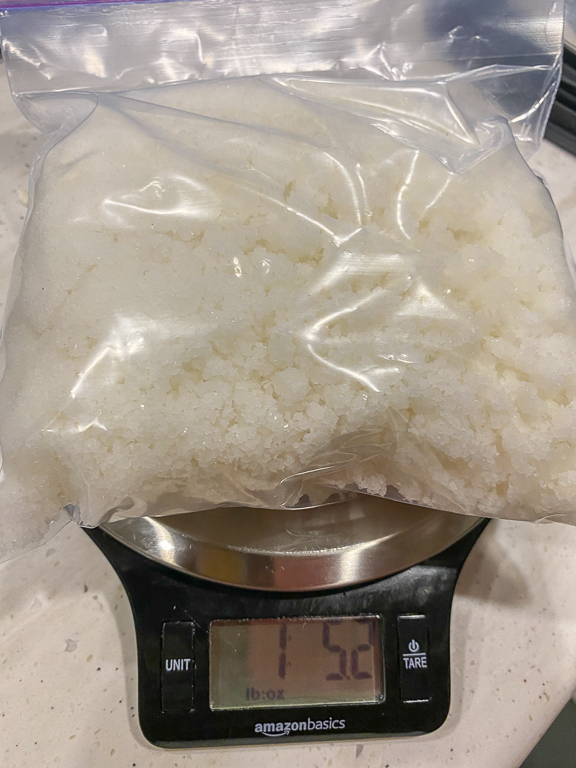