A Tillamook Good and Creamy Yogurt taste test - All 12 flavors!

Time for another taste test! Whenever I see something that has a bunch of different flavors, I'm always tempted to try them all! Recently we visited the Tillamook Creamery in Tillamook Oregon where they make all these delicious treats! 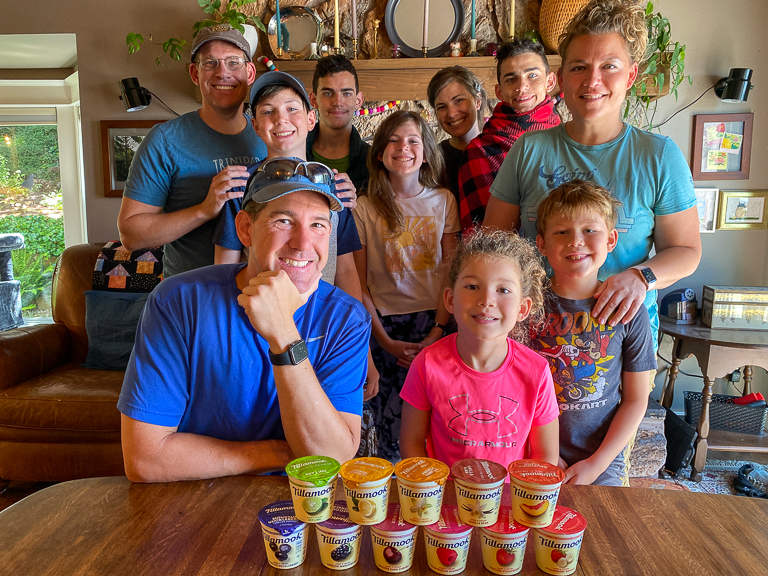 We've got 11 different yogurts here to try! Thank you Jess for putting together this beautiful sample board. I love that the lids are all different colors! 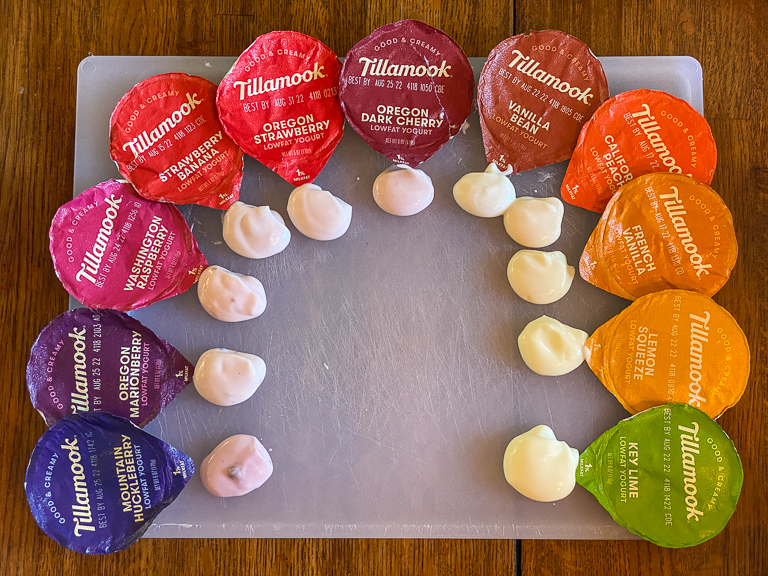 At the Tillamook Creamery, at the store at the end of the tour, they have refrigerators full of all the different products that they make. There's 11 different flavors of the Good & Creamy yogurts here, so let's try them all! 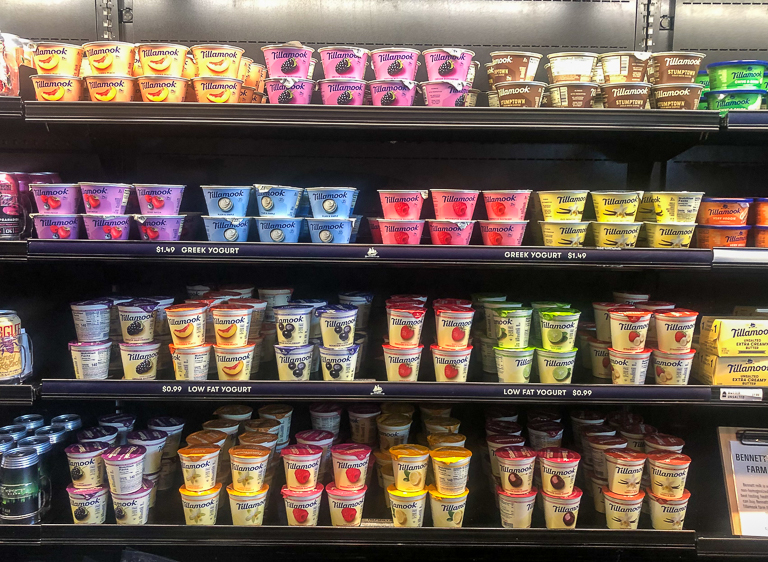 Daisy, I know you want to be a part of this taste test, but you have to sit this one out. This isn't like the Tillamook Ice Cream taste test where you got to participate. 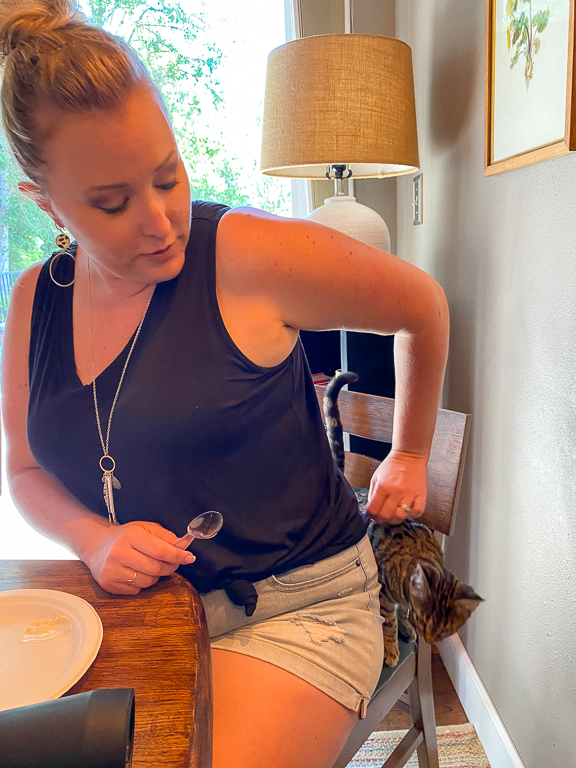 T thinks yogurt is a good snack during the middle of the day. Our fridge usually has a few different kinds in it. 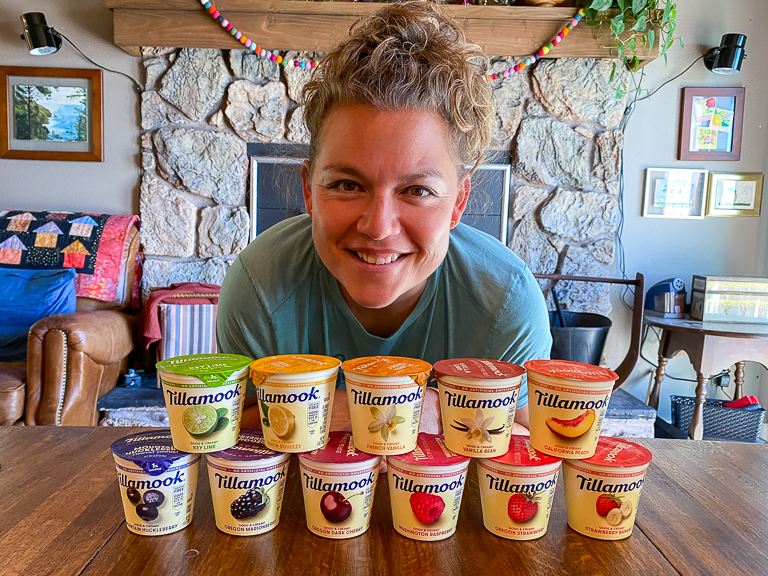 And Alli is always happy to get a taste. Let's start trying them! Everyone got a plate and a spoon while Theresa opened all the yogurts and spooned out a little bit for everyone to taste! 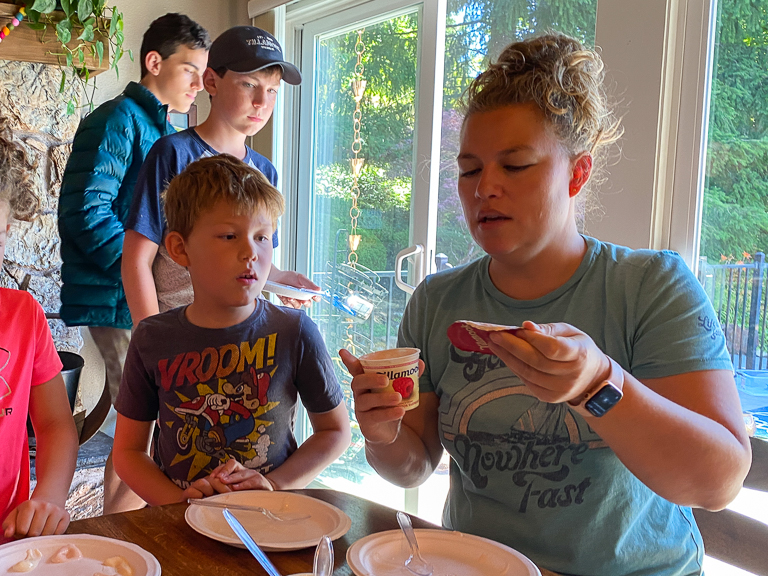 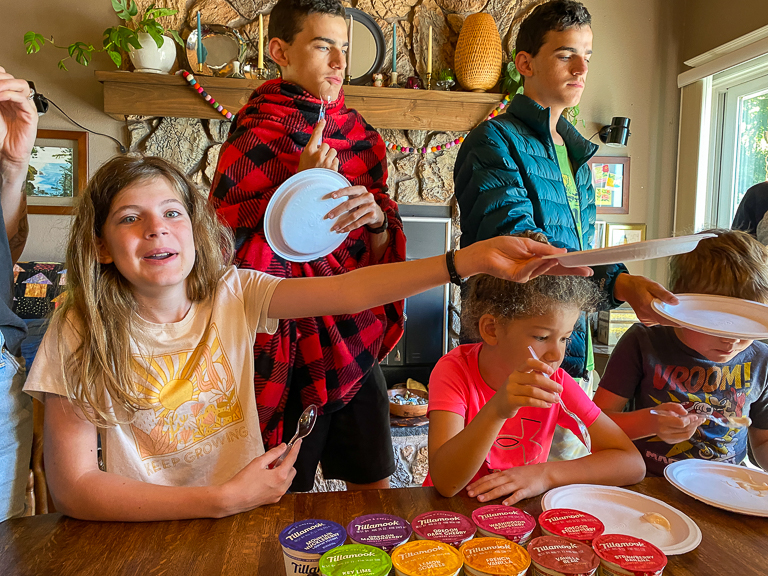 California Peach Good & Creamy - Peaches and creaminess.
Emma - I'm nervous.
Joe - About what? What's to be nervous about.
Emma - I don't know if I'll like it.
Ian - That's delicious!
Joe - Is that Oregon Peach?
Theresa - No, it's California Peach.
Joe - There's no chunks in it.
Jon - I got one! It's a sliver.
Joe - Oh, I guess when you only get a little you might not get a chunk.
Megan - I don't like chunks. Jess - What about the lids? Someone needs to lick the lids.
Theresa - Jess, you can be our lid licker! 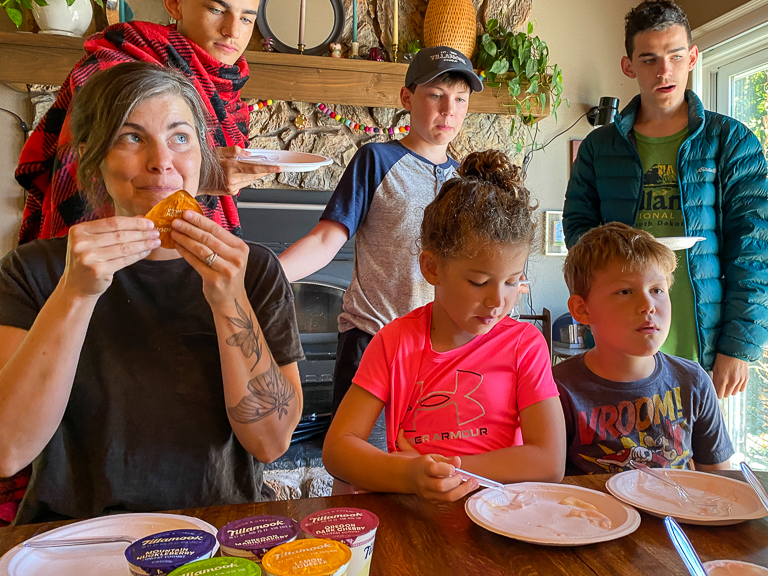 Strawberry Banana Good & Creamy Yogurt - Juicy strawberries, ripe bananas, 6g protein + Vitamin D – a perfect snack for kids and the kid at heart.
Ian - Mmm.
Eli - This is generally a good flavor.
Emma - This is pretty good!
Jon - I like it a lot. I can eat all of it.
Joe - It reminds me a lot of the Gogurt tubes. It's like a kids yogurt. 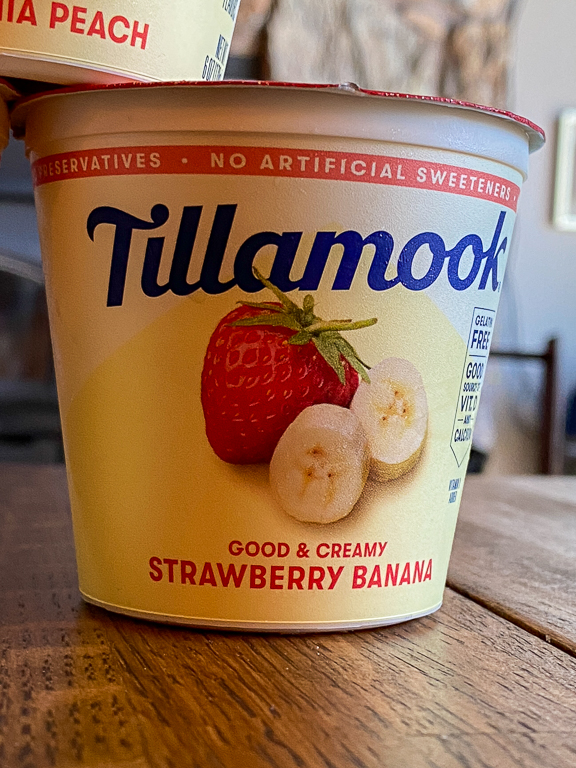 Oregon Strawberry Good & Creamy Yogurt - Bringing you the sweetest strawberries from right here in Oregon.
Theresa - This is just plain strawberry.
Ian - It's pretty good.
Theresa - It's very mild though. I would like a little stronger flavor if I had my druthers. 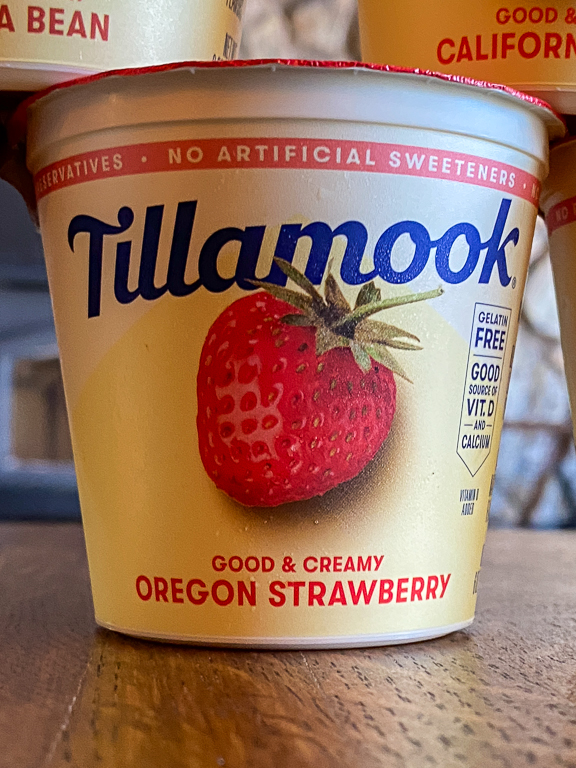 Vanilla Bean Good & Creamy Yogurt - Great days start here. Open up the possibilities.
Jess - It's like ice cream that got to refrigerator temperature, but isn't the right texture.
Megan - That's like a creme brulee without the good parts.
Joe - I see little vanilla beans in it.
Megan - I don't love that. I don't like seeing the beans.
Theresa - It's very tangy. 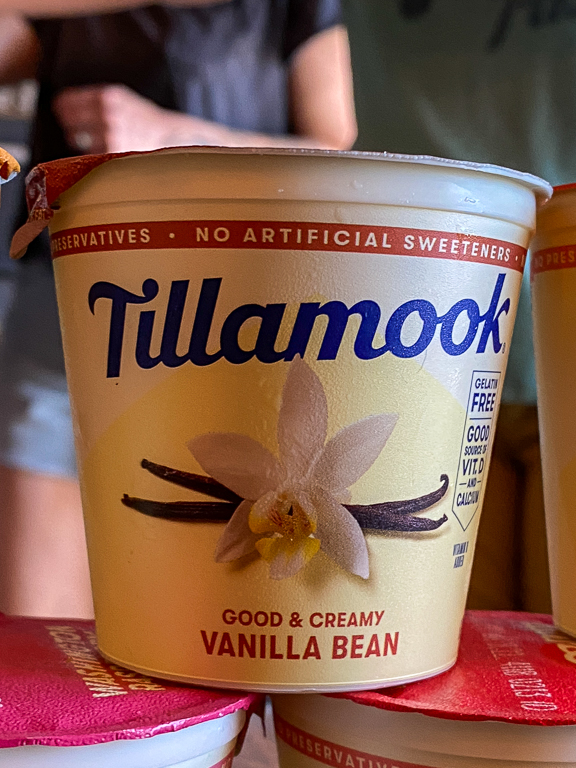 Washington Raspberry Good & Creamy Yogurt - Picked right here in the Northwest, ripe and ready to brighten up your day.
Megan - I like this one. That is good.
Ian - That one is good!
Jon - That reminds me of a Mamba.
Joe - It does! It's a light flavor.
Jess - I want it in a candy. I don't know that I want it in a cup of yogurt.
Joe - I've got a raspberry seed that I'm chewing on. 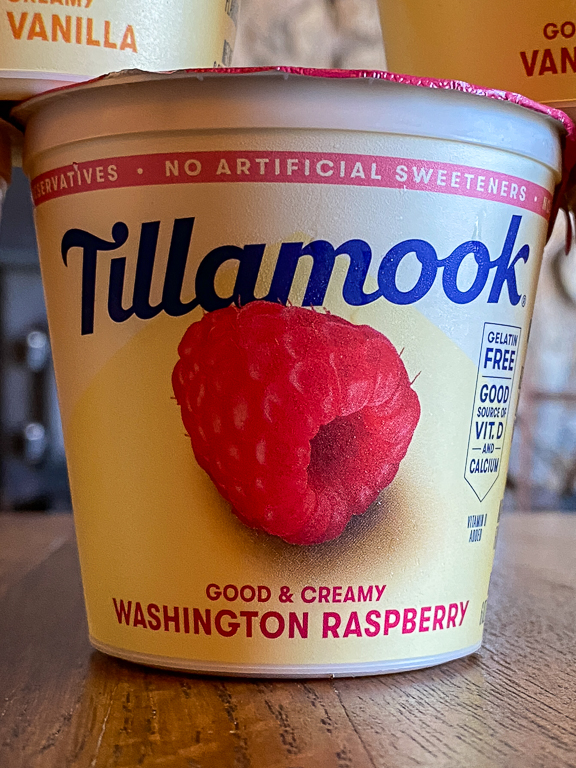 French Vanilla Good & Creamy Yogurt - Say "oui" to silky and luxurious.
Theresa - This is a French Vanilla. No little bean pieces in this one.
Megan - I like it better than Vanilla Bean.
Ian - Yuck!
Jon - That is the only one I have not liked so far.
Alli - I hate that one.
Ian - I do not like that one at all!
Joe - I like it less than Vanilla Bean.
Josh - That tasted horrible. 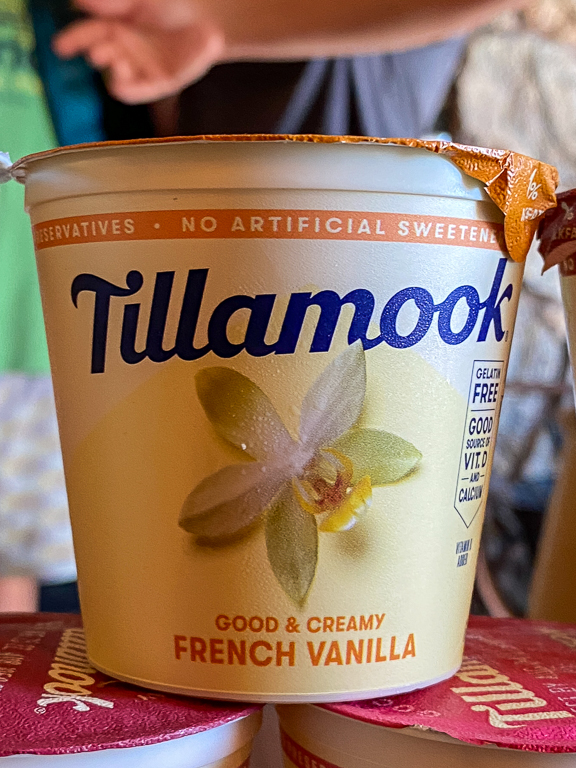 Oregon Dark Cherry Good & Creamy Yogurt - Local, juicy goodness made with real Oregon cherries.
Theresa - Who wants the cherry chunk?
Megan - Eww.
Jon - That tastes great.
Jess - It's like a cherry medicine. Someone took cherry medicine and mixed it with vanilla yogurt.
Theresa - Oh. Nope. No cherry for me.
Jon - I liked it. 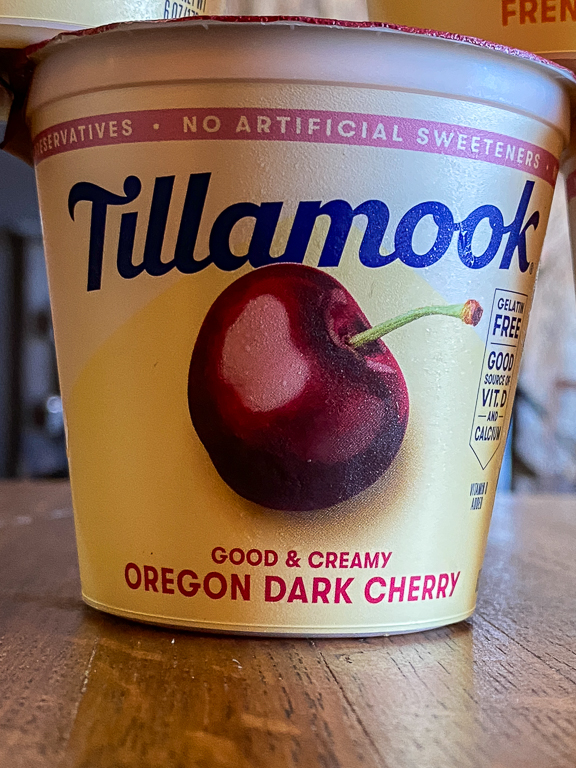 Lemon Squeeze Good & Creamy - Like a cup full of fluffy meringue with a touch of tart.
Theresa - Time for Lemon Squeeze!
(clapping from many people)
Theresa - Oh, people are looking forward to this one!
Megan - I like it because it never has chunks. Lemon never has chunks. Lime never has chunks. I want my fruit whole, or not at all.
Ian - Yum yum!
Jess - Always the best!
Joe - It could be more lemony.
Theresa - I feel like all the flavors have been muted.
Jon - But you have a whole container to work through. You don't want it too strong. 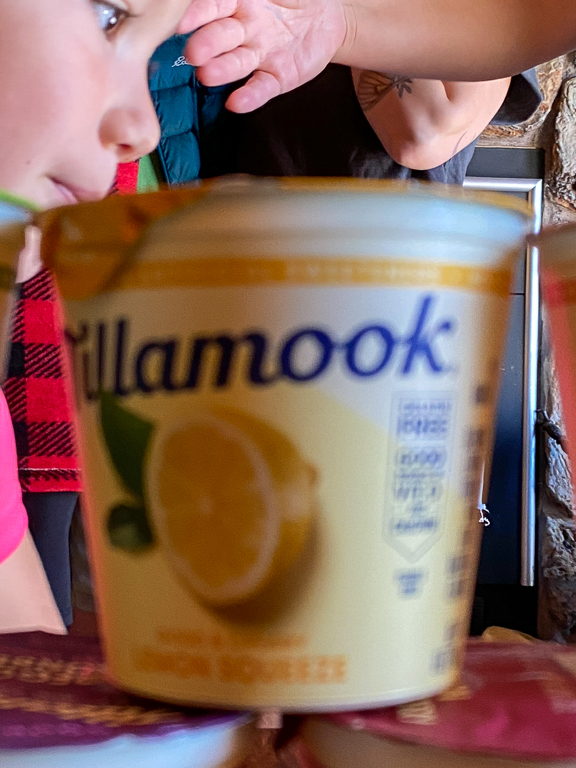 Key Lime Good & Creamy Yogurt - Brightened with key lime-give this one a squeeze.
Theresa - Next is Marionberry!
Megan - Can we do the lime next? I want to taste it next to the lemon.
Theresa - Only because you asked.
Megan - Thank you. I want to see which one I like more.
Jess - This one is going to be the best!
Megan - I could use some more.
Ian - Mmm. That one tastes good! Lime wins over lemon.
Joe - Yes, it wins between lemon and lime. It has more flavor. 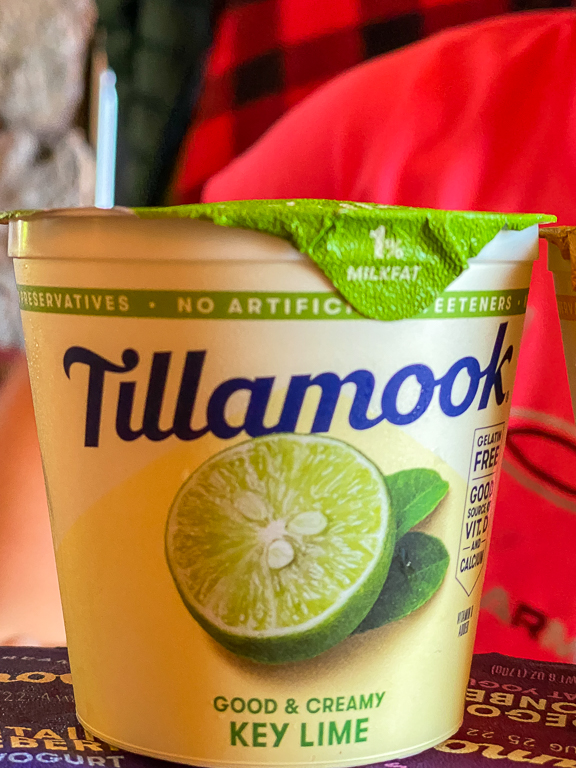 Oregon Marionberry Good & Creamy - A hometown berry hero.
Megan - That tastes like nothing after trying the lime.
Jon - Way too muted flavor. It's there, but it's not strong.
Isaac - I taste nothing.
Jess - It's like raspberry wanna-be. 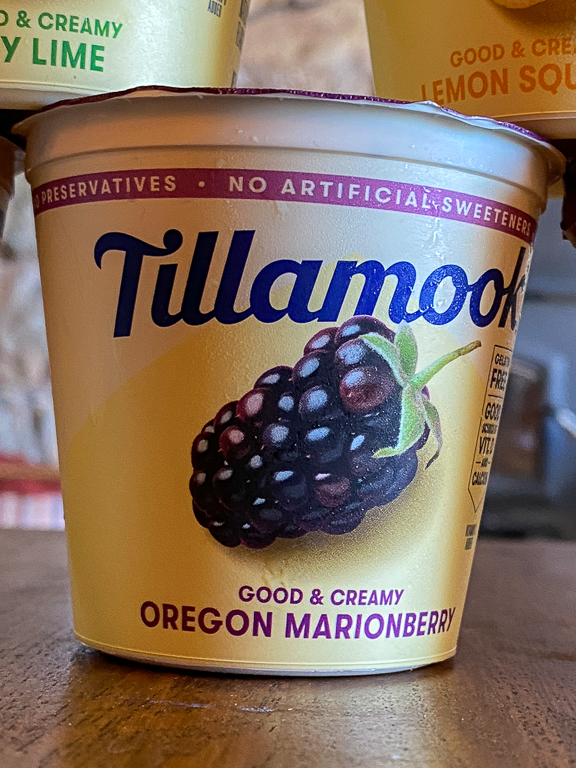 Mountain Huckleberry Good & Creamy Yogurt - From the patch to your spoon.
Theresa - The Huckleberry is similar to a blueberry.
Jess - This one smells good.
Ian - Mmm! That one tastes like mochi. Blueberry mochi.
Theresa - That's my favorite berry flavor so far. 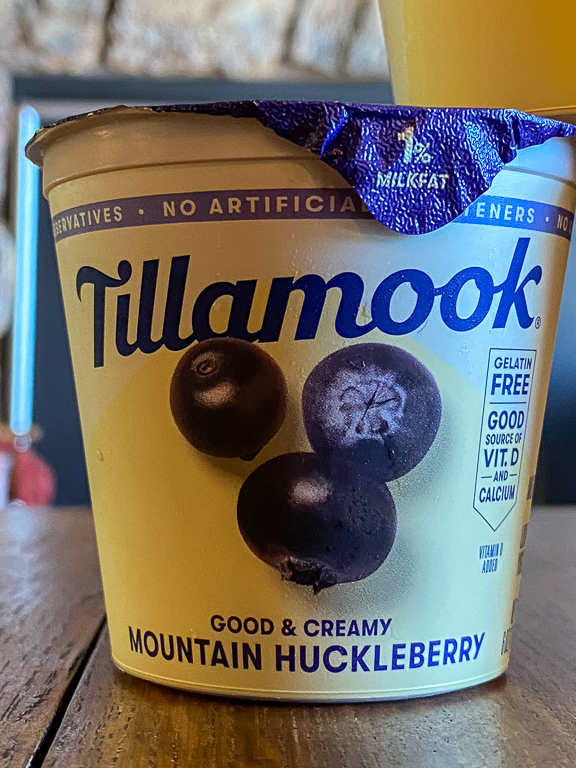 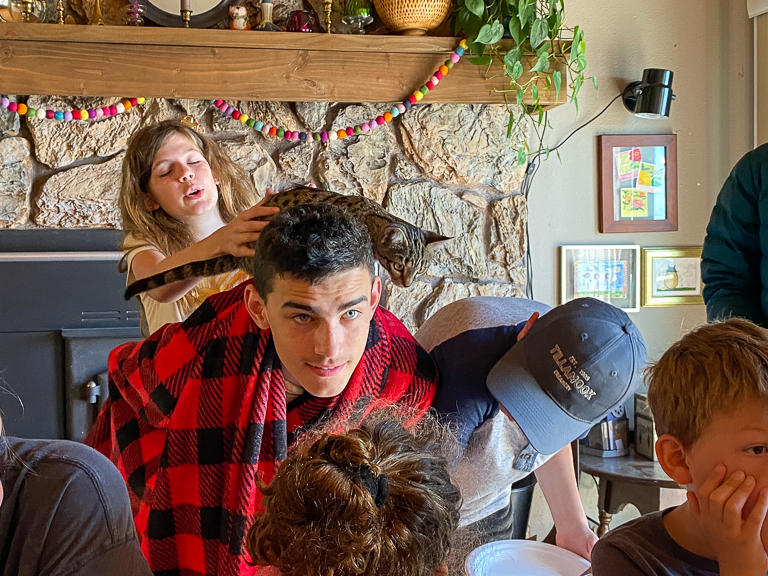 I like how all the lids have different sayings on them. We collected 6 different ones. 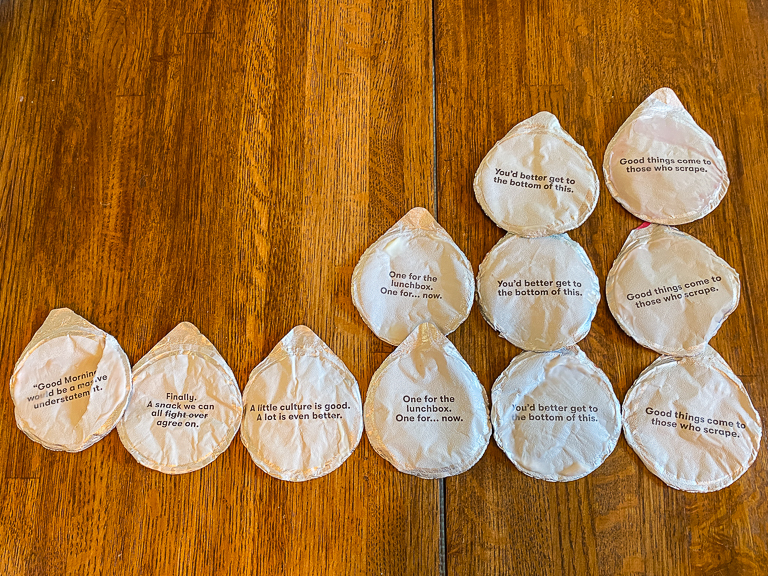 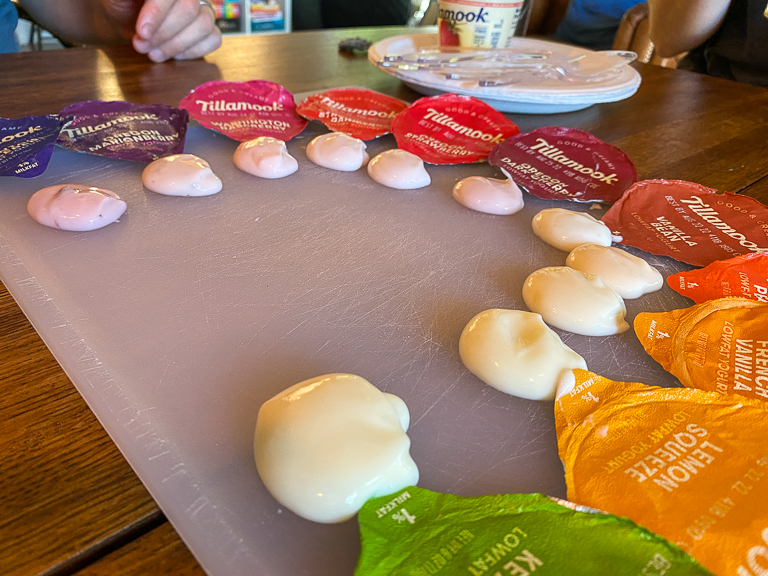 Joe - In general I felt like that could all have had more flavor.
Jon - I feel like that's how their ice cream is too. Flavor is a little muted.
Jess - Is it like the La Croix of yogurts?
Theresa - Now I'm curious what the Greek yogurts taste like. I'm a Fage yogurt girl.
Jon - There's not much color variety is there.
Theresa - I don't know if yogurt should have neon colors though. I feel like this is one of our "close to healthy" taste test.
Megan - This is better than the cottage cheese taste test.
Theresa - That one was disgusting. Even though there were things I complained about, these were all very smooth yogurts. They had a good texture and mouth feel. They weren't gummy.
Oh boy. Why is the hat turning backwards? 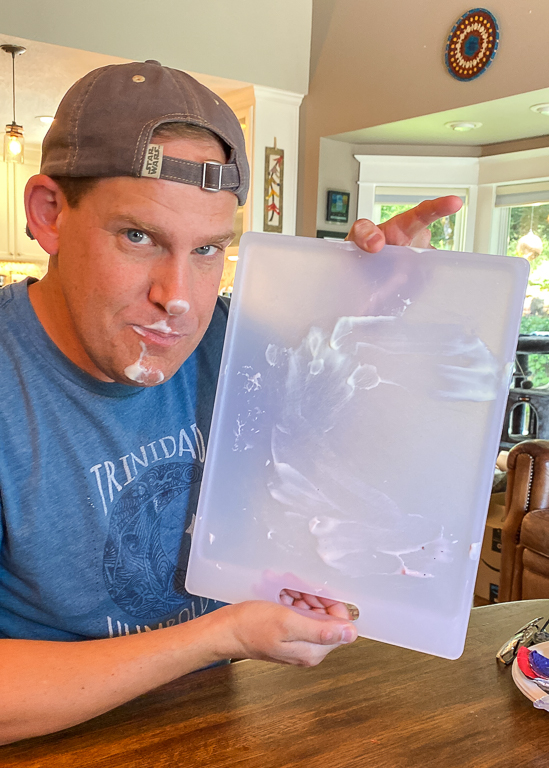 Well as I was going through pictures and doing research for the article, like I usually do, I discovered that there is a 12th Tillamook Good & Creamy Yogurt flavor! Why didn't they have this at their flagship store?!?
I waited until we had at least some of the family visiting to try it. 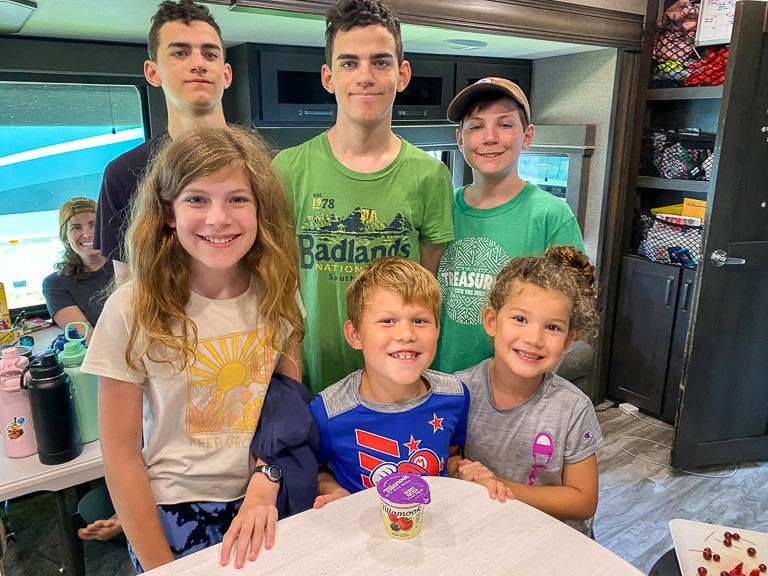 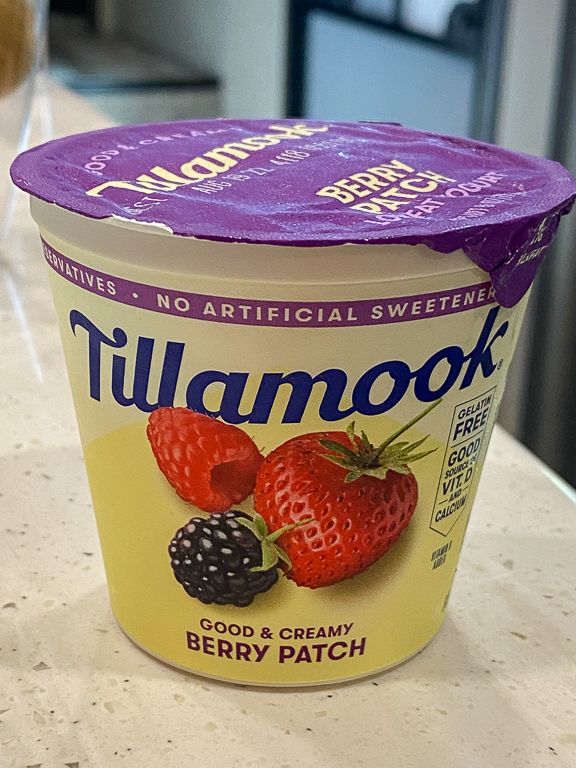 Berry Patch Good & Creamy - No one does juicy berries like the Northwest, and we’re sending you our best.
Jess - What berries are included in this mixture?
Joe - The front shows strawberry, blackberry, and raspberry.
Jess - This one has more flavor than the other ones.
Jon - Like a Gogurt, but not sweet.
Joe - Would anyone change their favorite from last time?
Jess - I like this one better than the Raspberry before.
So there you have it! 12 different kinds of Tillamook Good & Creamy Yogurt! 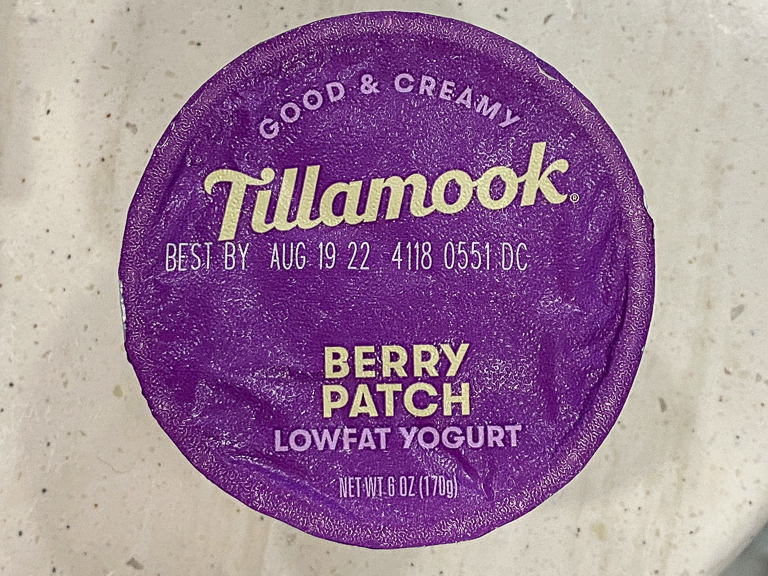