It's Easter! We've got a few things that have been going on that we've been doing to celebrate.
The first thing we did was change out the shamrock in the front yard from St Patrick's Day into something more appropriate for Easter. An egg, a bunny? How about a giant carrot! 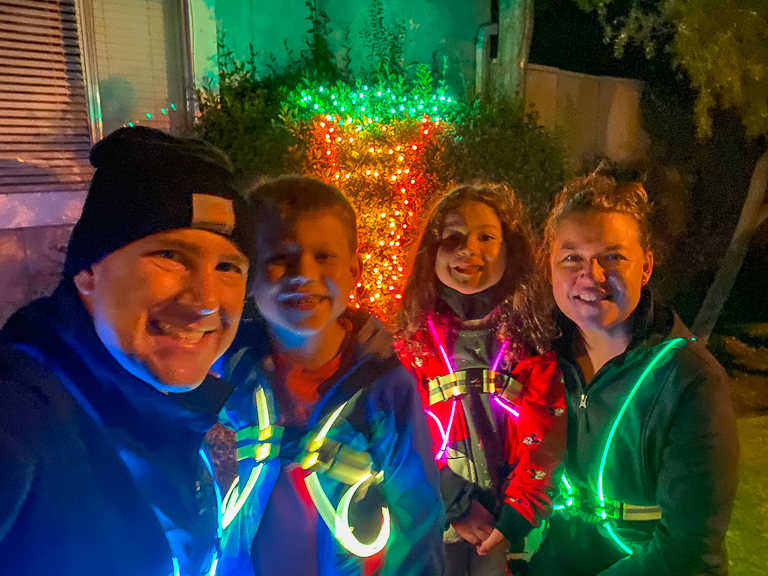 The kids enjoy doing things on their own. Alli put together a whole Easter Egg hunt around the house. 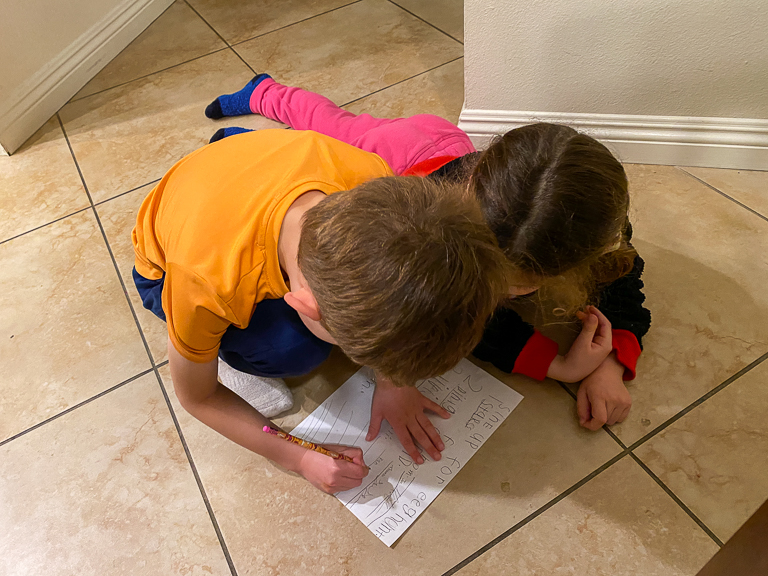 But first you have to sign up on the sheet she created. "Sine up for egg hunt" along with the room locations where the eggs can be found. 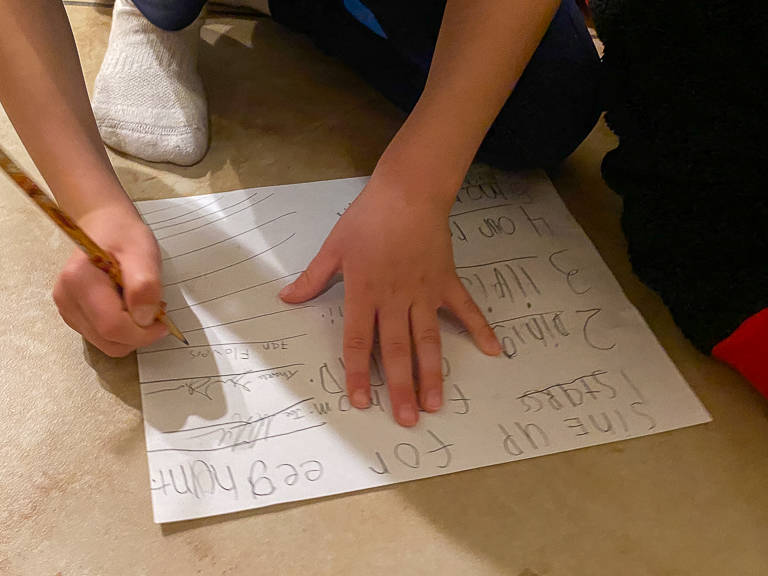 And for your prize, you get your very own Easter Egg that she made! One for everyone who joined her egg hunt! 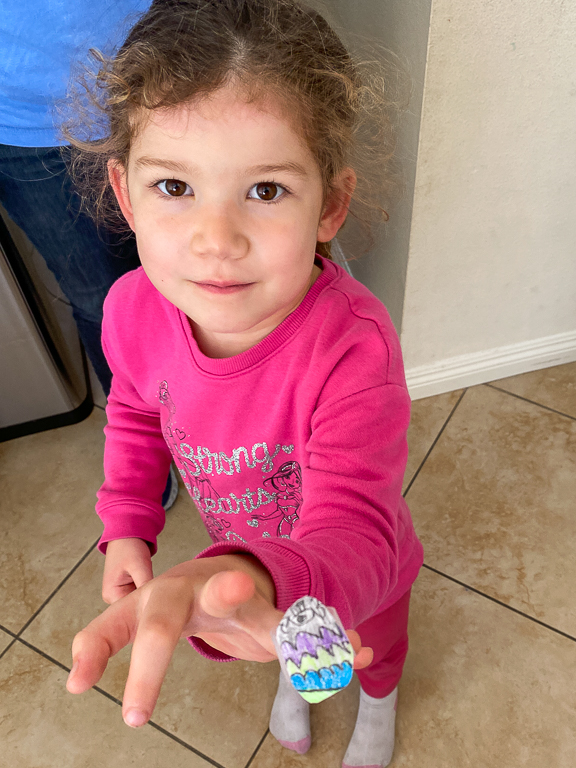 Finally Easter was here! The Easter Bunny was a little late getting to our house. They already had breakfast and were back in their room by the time he finally came! 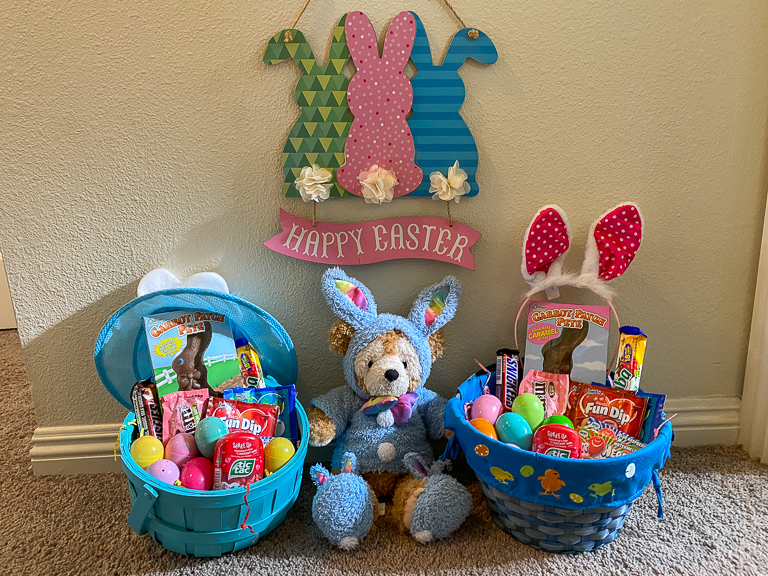 So much good stuff! But I think the Easter Bunny got his holidays confused. So many of these seem to be Valentines themed. Silly bunny. 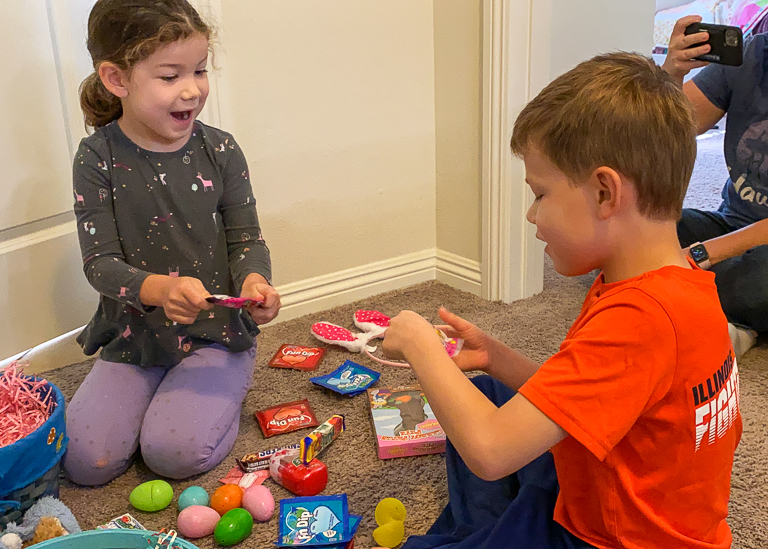 After looking through their baskets it was time to go hunt for eggs. 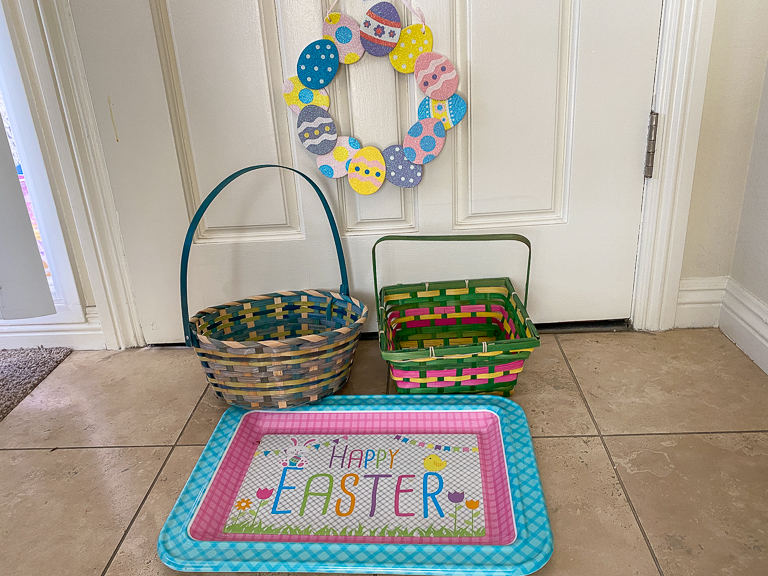 Ian was hoping the bunny did a better job hiding the eggs this year compared to previous years. Those times he'd leave them in the middle of the yard and it was easy to find them. 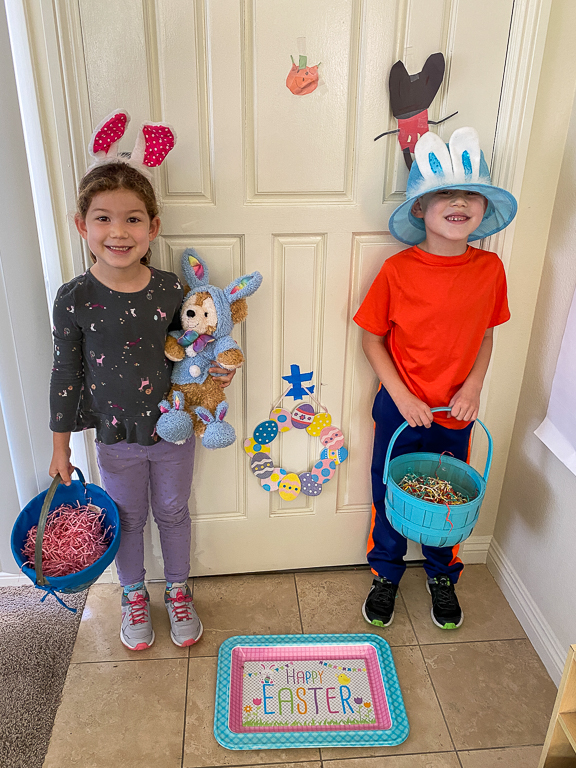 I think he did a much better job this year. 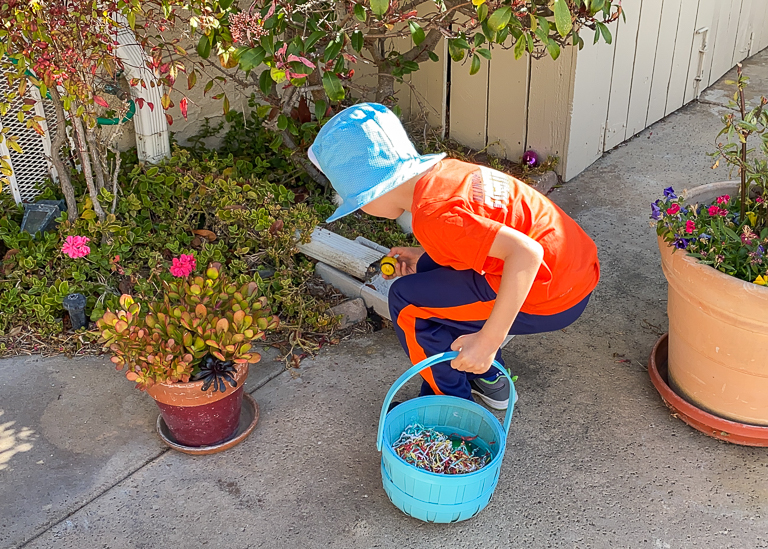 There's even about a dozen Disney eggs we've collected over the years from the Disney Egg Hunts. 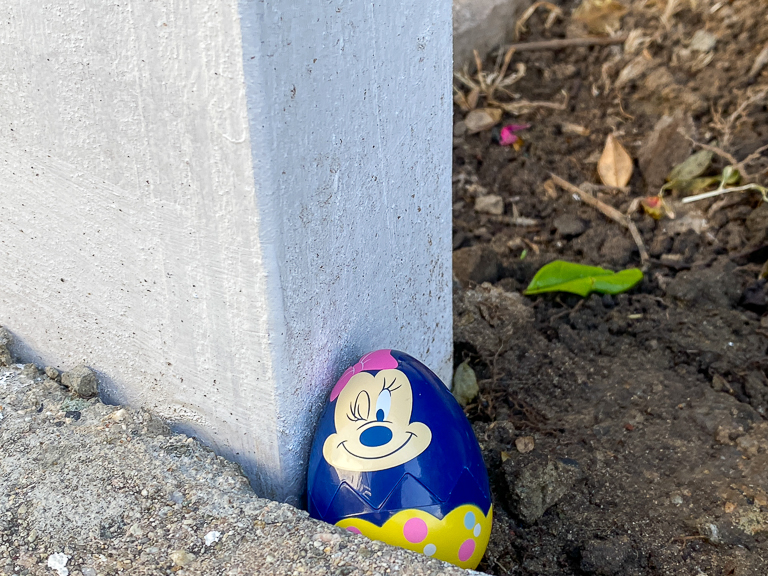 The kids had fun scrambling around the driveway and yard finding eggs. 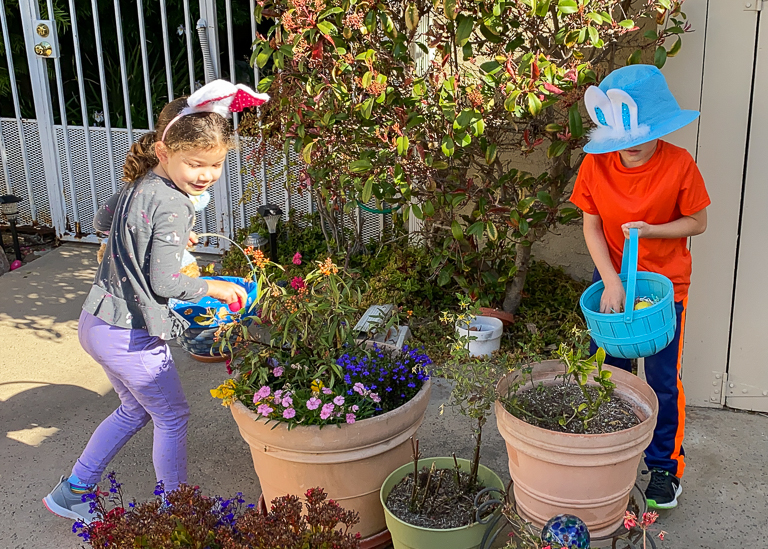 I love that they work together and look out for each other. When they were getting down to the last of the eggs, Theresa suggested they were still missing one. She gave them a hint of "Hibiscus" and they both went running to the front of the driveway. Alli spotted it first, but couldn't reach it. 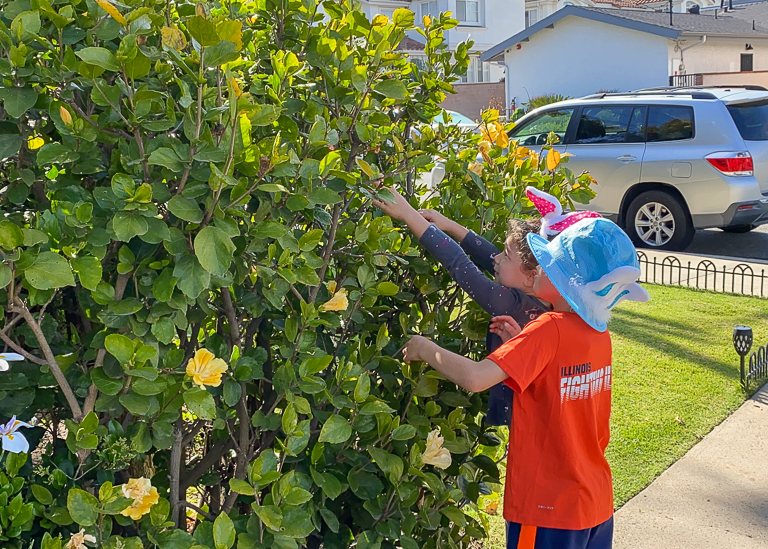 Ian could grab it though, so he did, but then gave it to Alli. 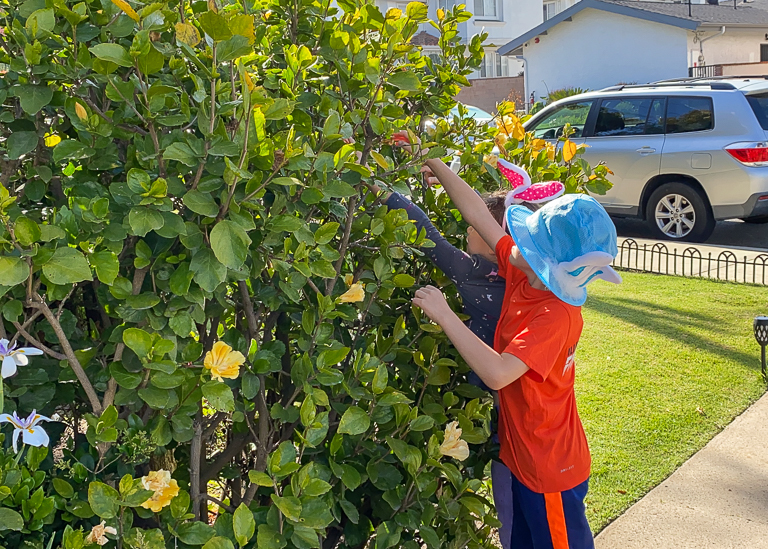 Alli took it and ran off to put into Ian's basket. I love it! 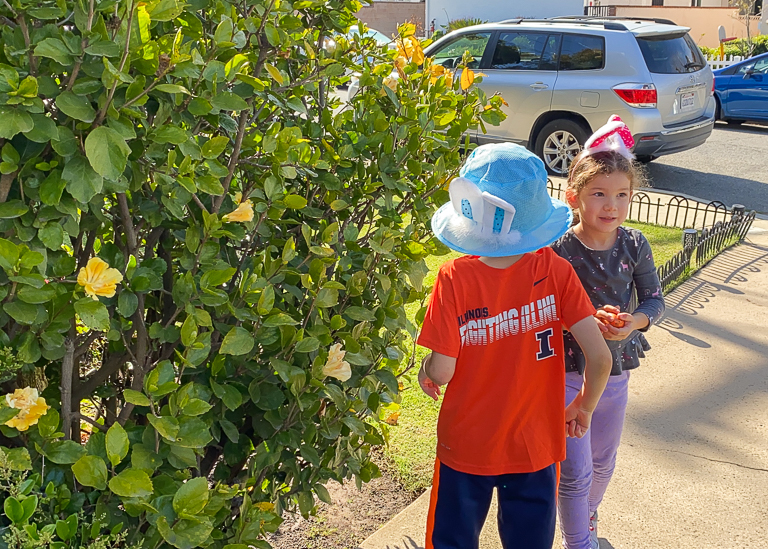 So many eggs this year guys! 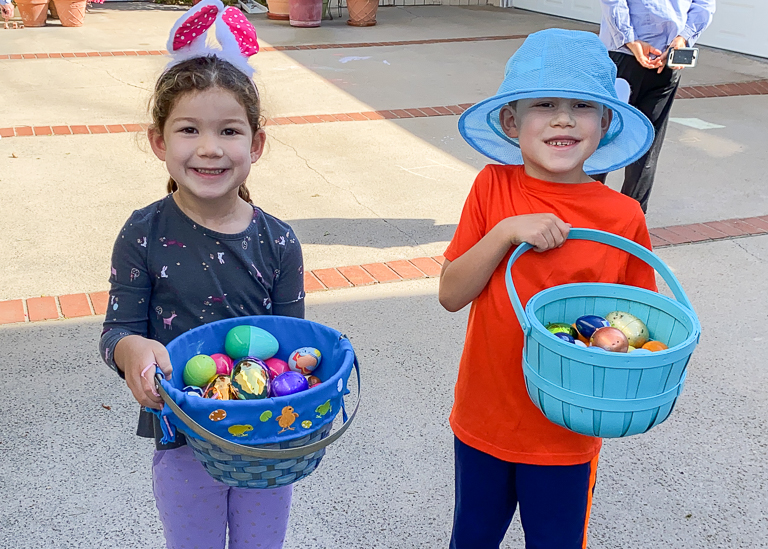 Now it's time to empty them and see what treats they have. 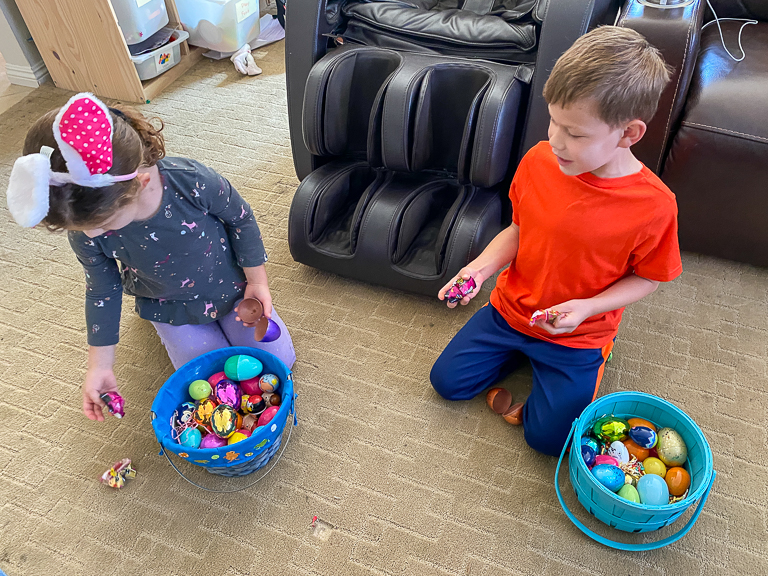 They each happened to find a golden egg that had $5 in it! And all the Disney eggs had $1 in them! 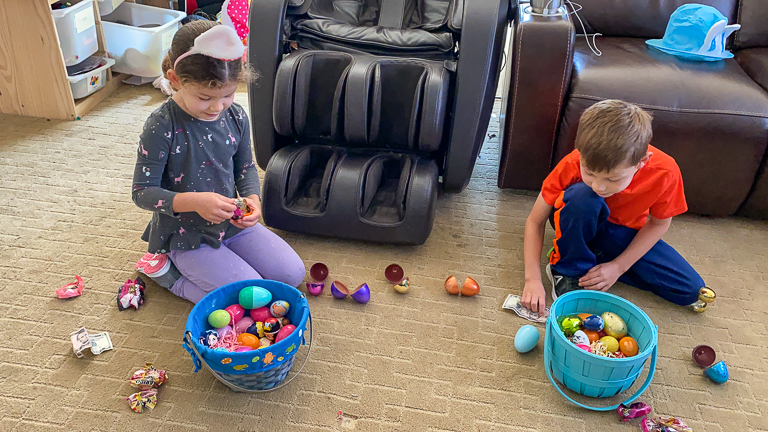 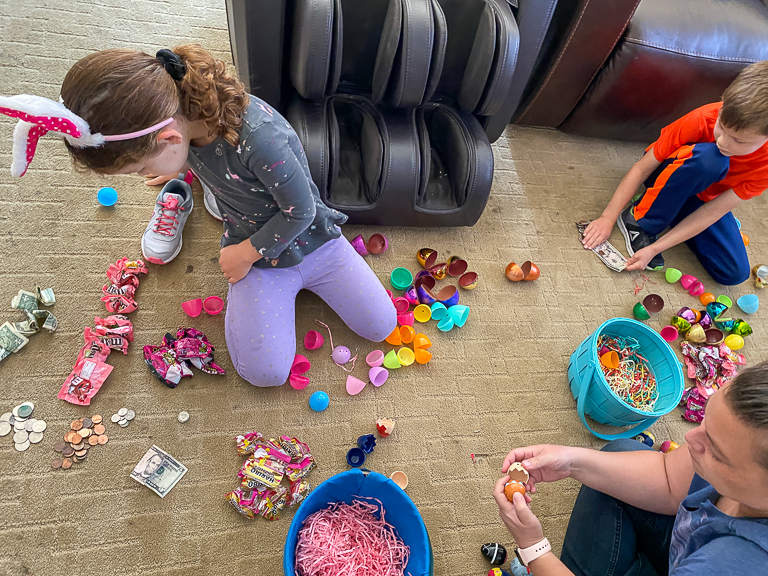 Eating their easter treats. Some things are best eaten outside, like the messy Fun Dip. 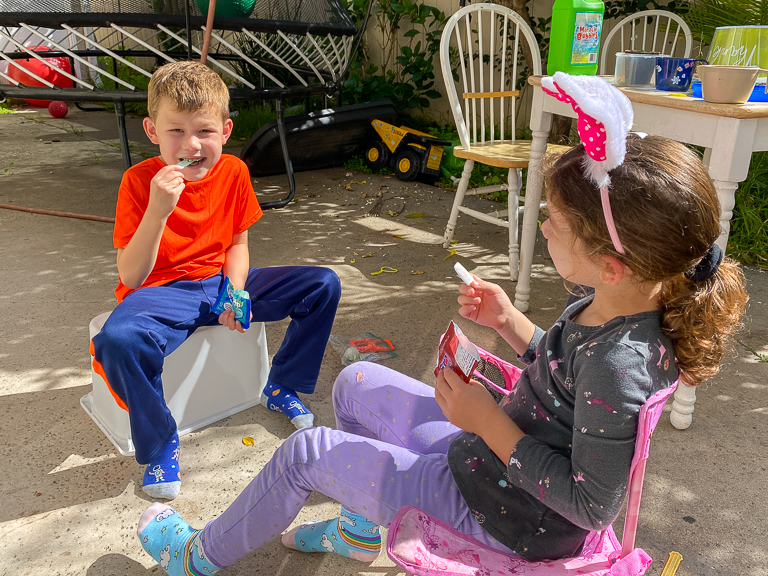 Later in the day we went for a bike ride. We like seeing the houses that have been decorated for Easter. 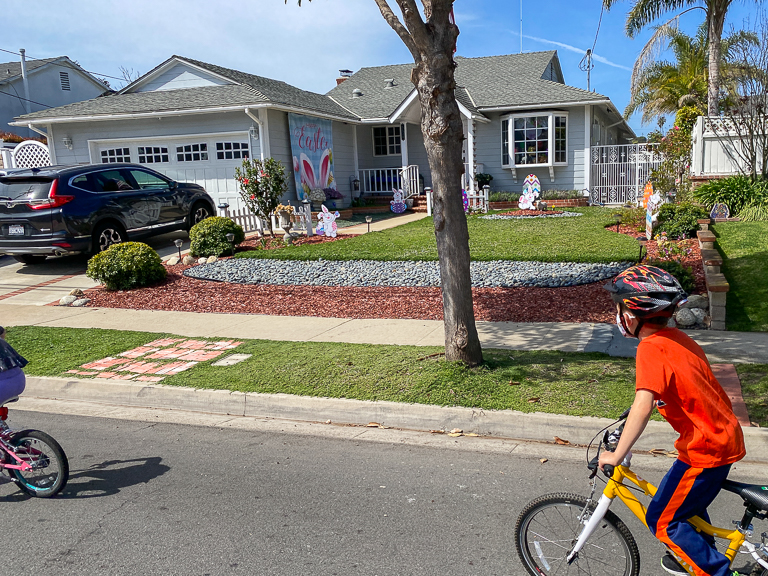 After lunch they got to nibble on their chocolate bunnies. Always with the ears. 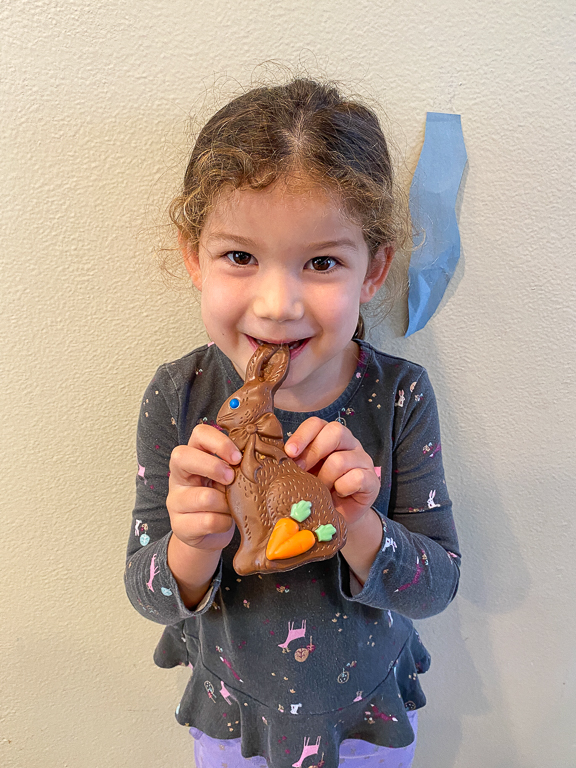 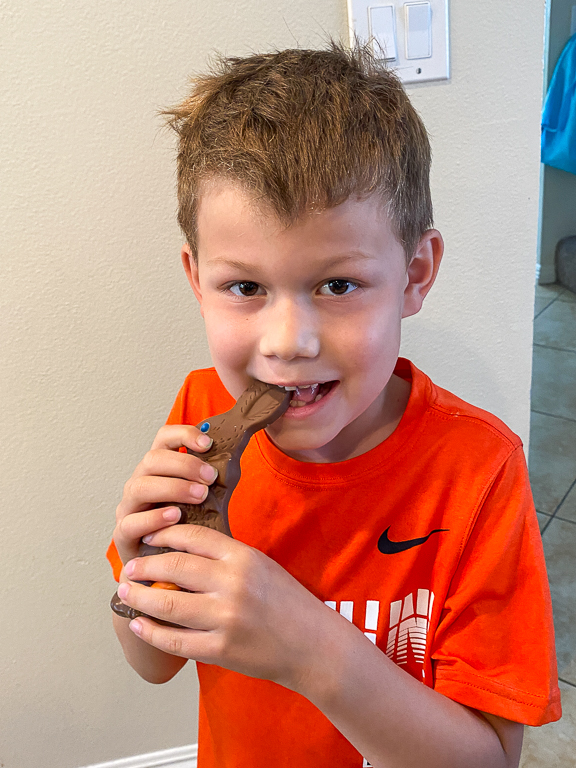 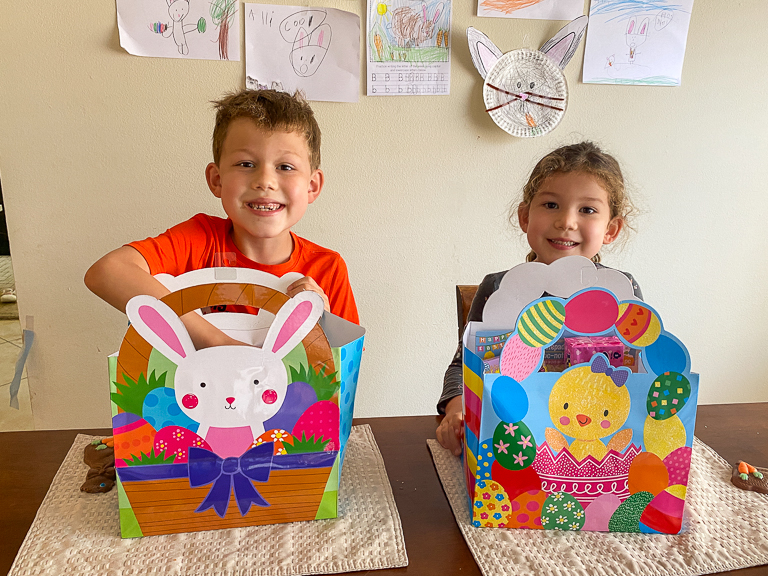 Facetiming with family is good, but it'll be great when we finally get to hang out with each other again. 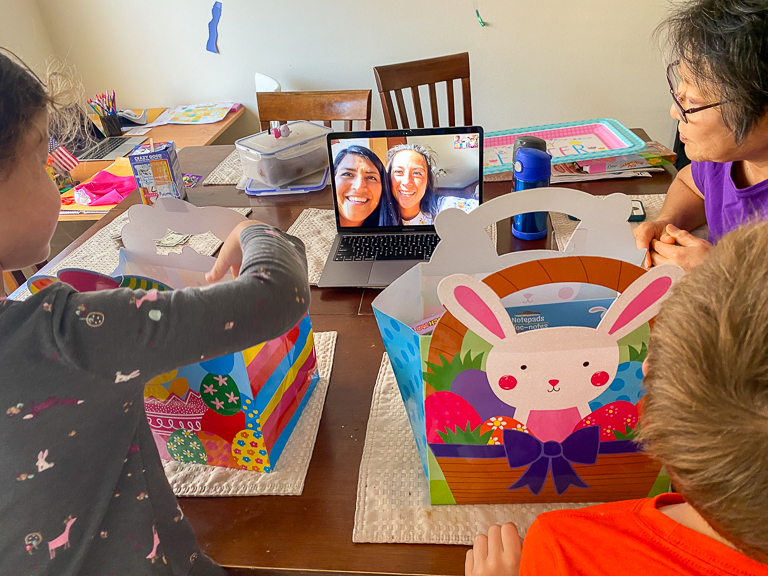 They love their bunny glasses. 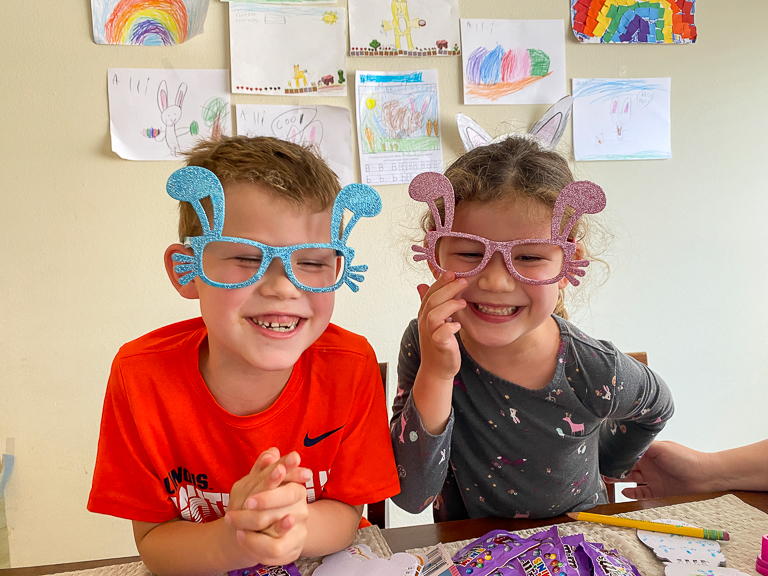 Chatting with Gram and Pop Pop too! 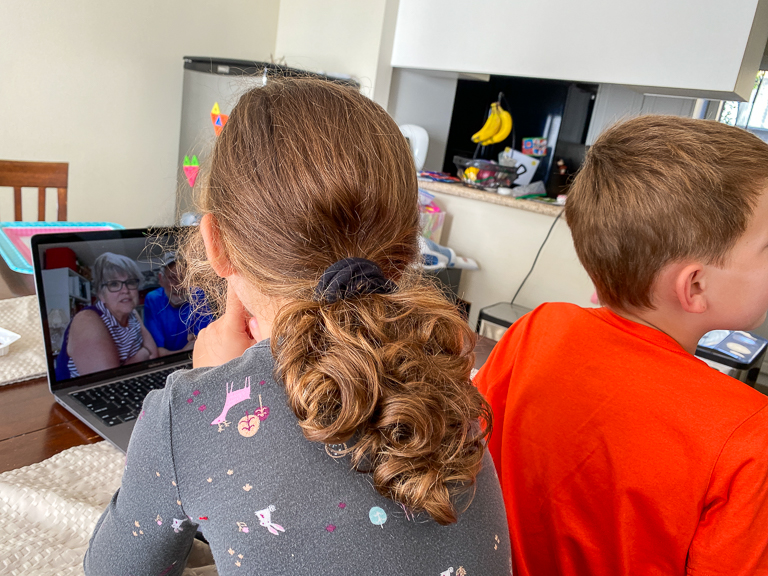 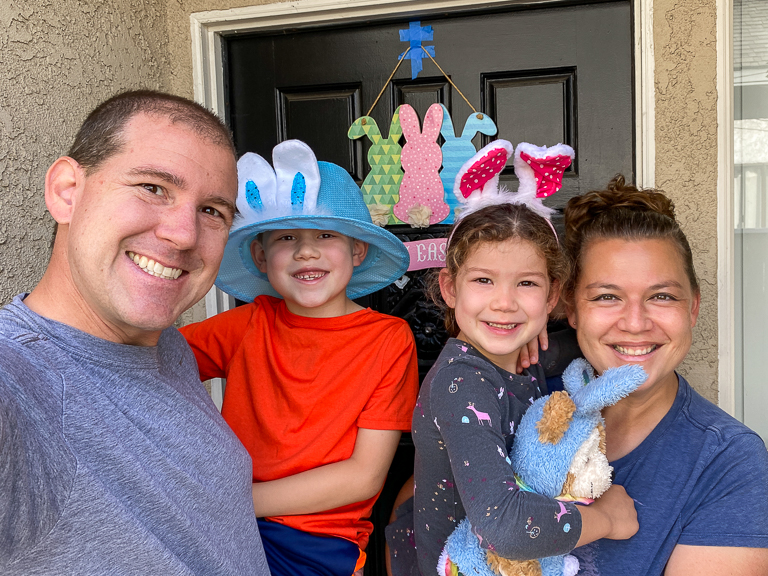