Today's post comes courtesy of another Theresa suggestion. Like most, it took the form of "Hey, look, here's a recipe to make the soft Asian bread." Followed by another "And here's another way to make it" "Here's how to make the filling". Okay, got it. You're requesting homemade Asian bakery bread. I think I can tackle that.

Our favorite place to go, and one that we take plenty of visitors to when they come (or used to come) is 85C. This bakery has a ridiculous variety and the cost is relatively cheap. Only $1.50-$2.50 per item depending on what you pick. Of course, when you buy a dozen different treats it can start to get expensive, but they are so very delicious.

Even with all the variety, there's some breads that we have to get every single time. The kids' favorite used to be the chocolate buns, but now it's the cheesy garlic bread. And the adults typically get the sweet cream cheese filled cheese bread. All three are on the menu to make at home today! 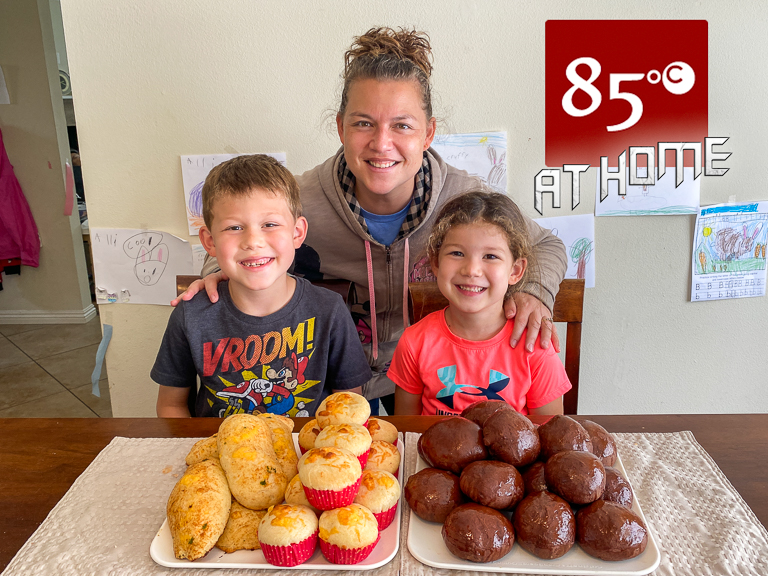 The simplest of the recipes Theresa sent is the one she wanted me to attempt first. If this works, why go through the extra trouble of the harder one? I'll be following along with thewoksoflife.com and their recipe for Milk Bread. Cake Flour isn't something I keep in the pantry, so this was a special purchase, just for this recipe. Along with that, there's bread flour, heavy cream, milk, yeast, sugar, and an egg. 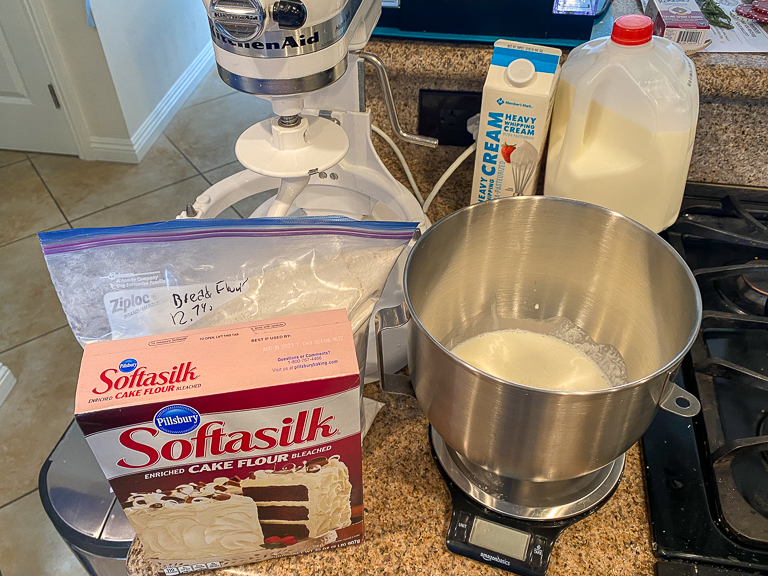 I used the kitchen aid (thank goodness) to knead for 15 minutes. 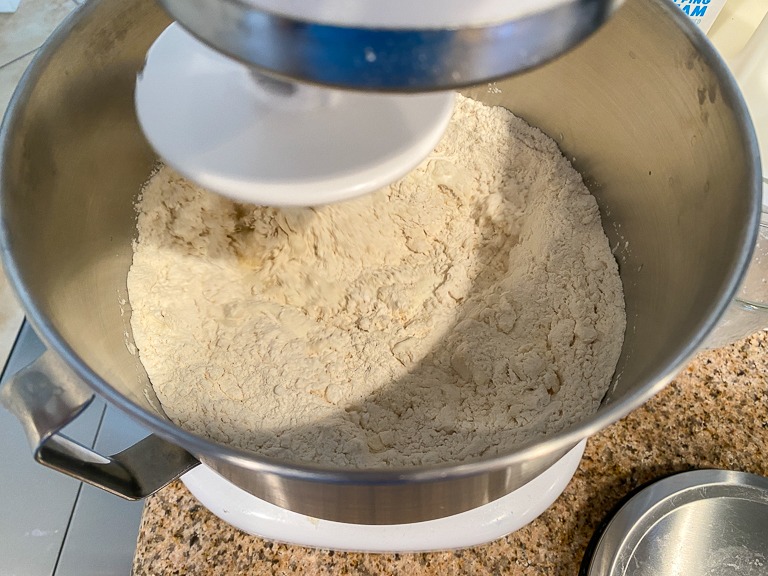 For the chocolate bread, it was the same recipe, but with the addition of cocoa powder and a little more liquid. 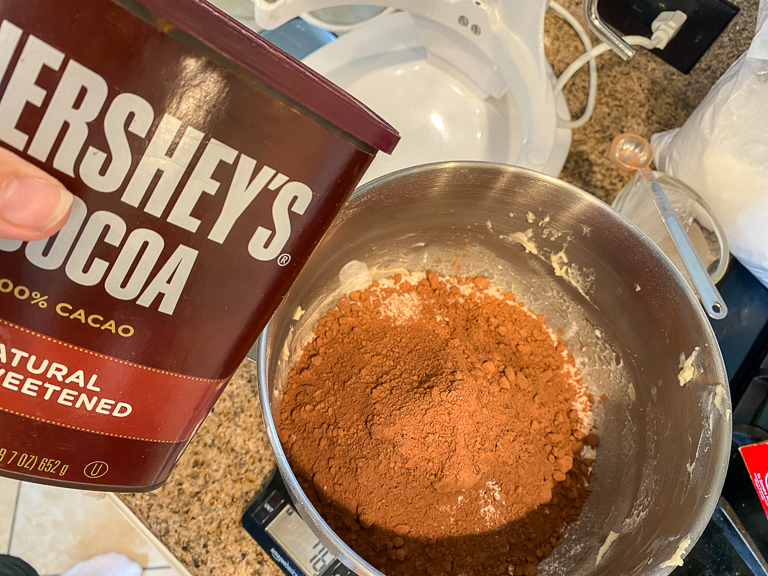 These doughs then sat on the counter for a while until they doubled in size. 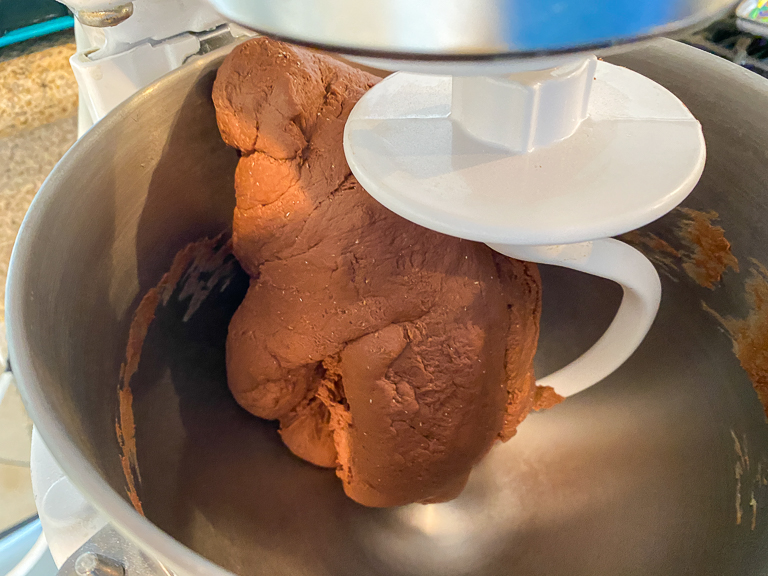 Time for the filling! I know it's a sweet cream cheese filling, but one of the sites I found suggested it had additional ingredients in it. So along with the cream cheese and powdered sugar, I added an egg, along with a little bit of flour. 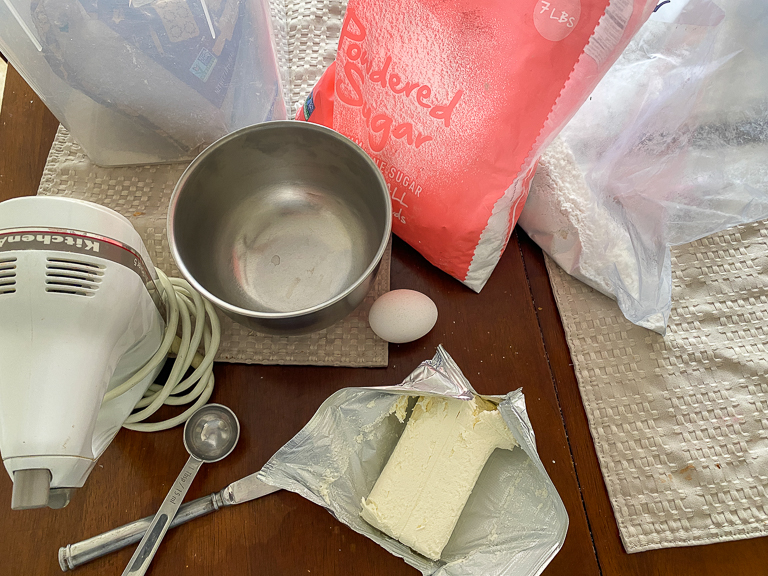 To make my sweet cream cheese buns, I flattened the dough, while Theresa used the cookie disher to scoop out a dollop of the cream cheese. 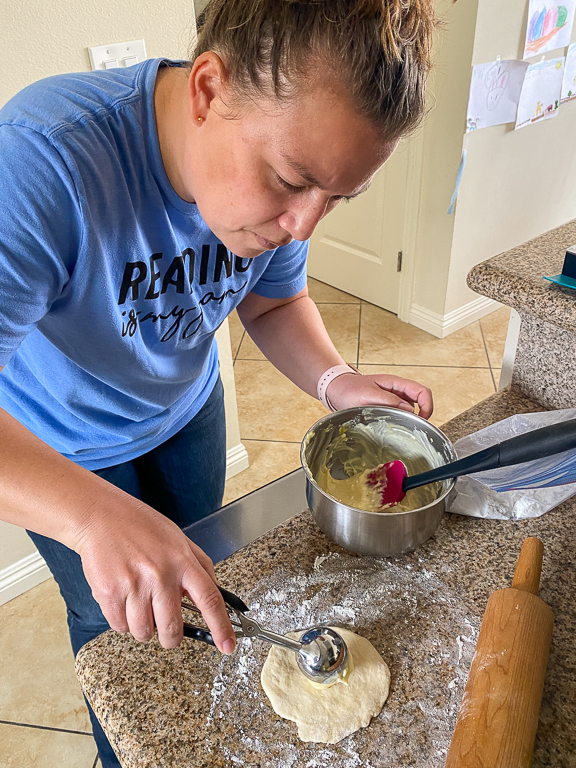 The chocolate buns have a filling as well. A chocolate paste that's not quite a liquid is what's inside the 85C buns. I'm using chocolate chips that I've microwaves with the tiniest amount of shortening. It was still pretty stiff, but still malleable. 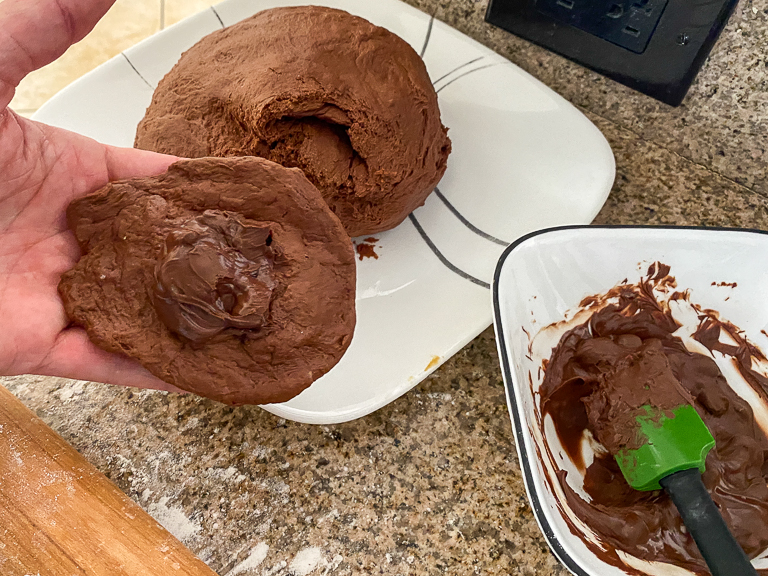 I left my cheese buns on the counter, inside cupcake wrappers and once they were ready, I brushed their tops with melted butter and sprinkles some mozzarella and sharp cheddar on top. 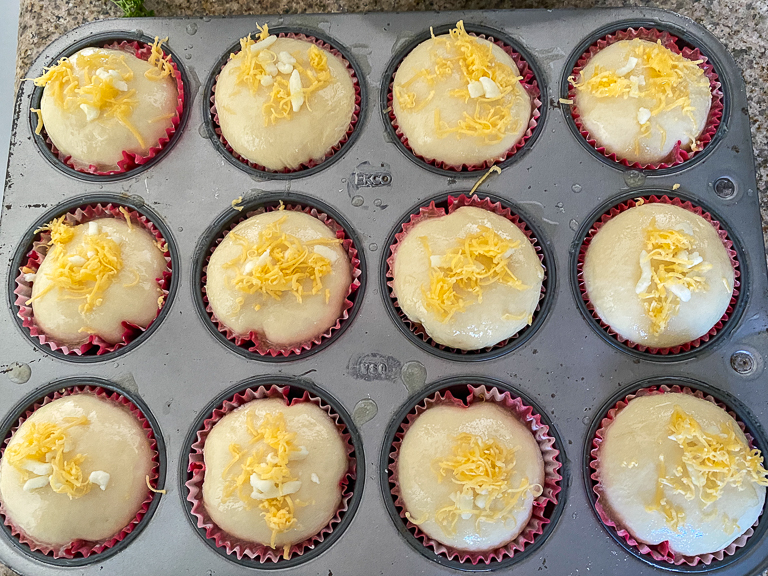 Similarly, my garlic bread pieces have been rising. 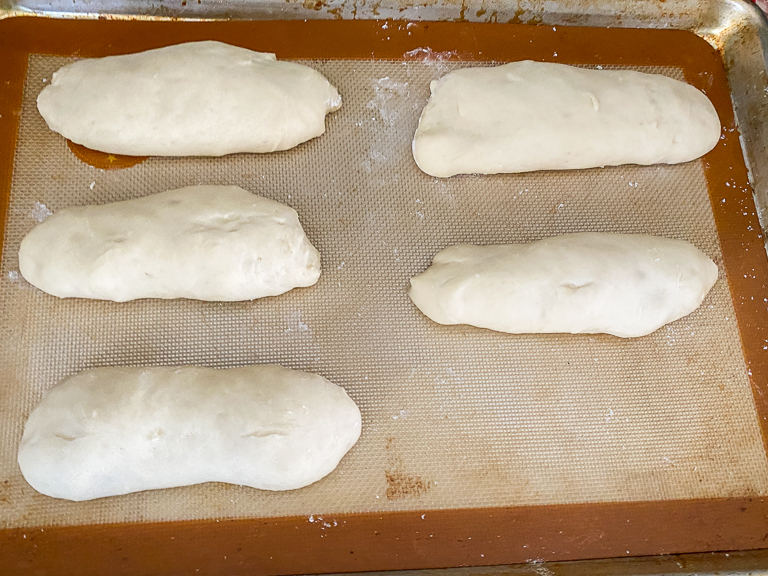 My mother-in-law brought some fresh parsley from her garden. 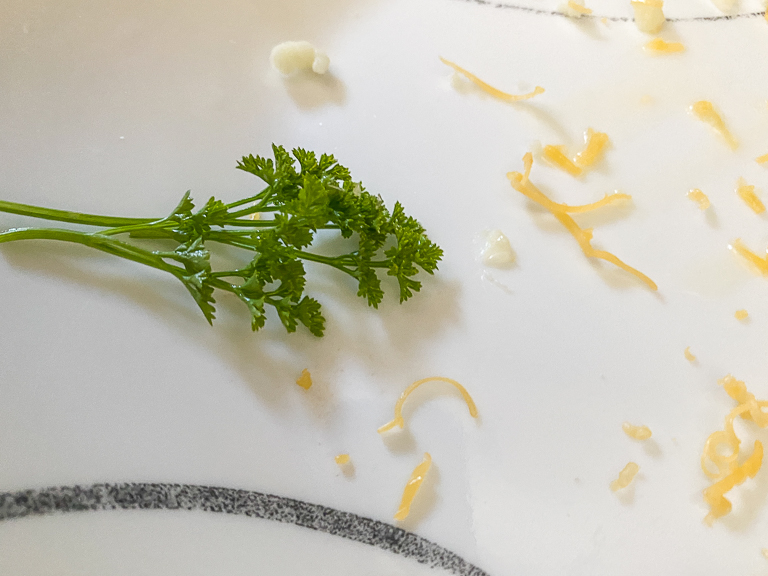 I chopped it fine, mixed it with some garlic butter, and brushed the tops of my breads. Then a sprinkling of cheese for these too. 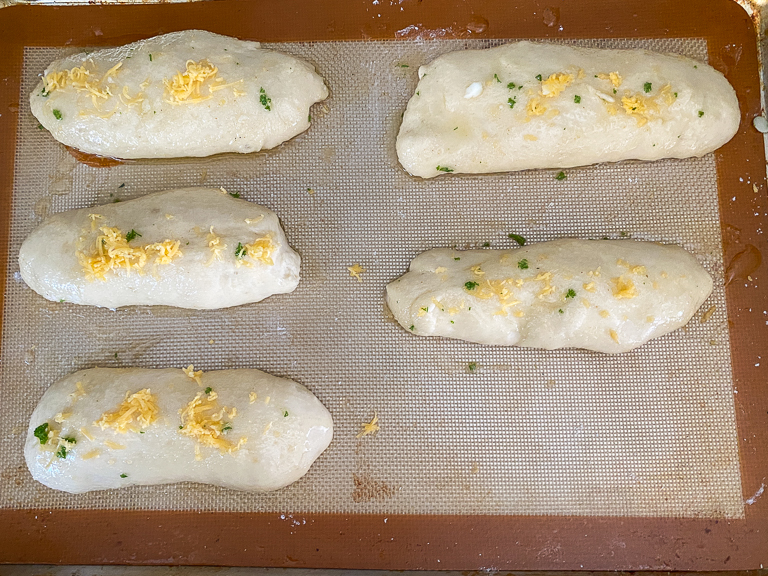 These sweetened cream cheese breads look beautiful! Right out of the oven, I brushed them all with more melted butter. 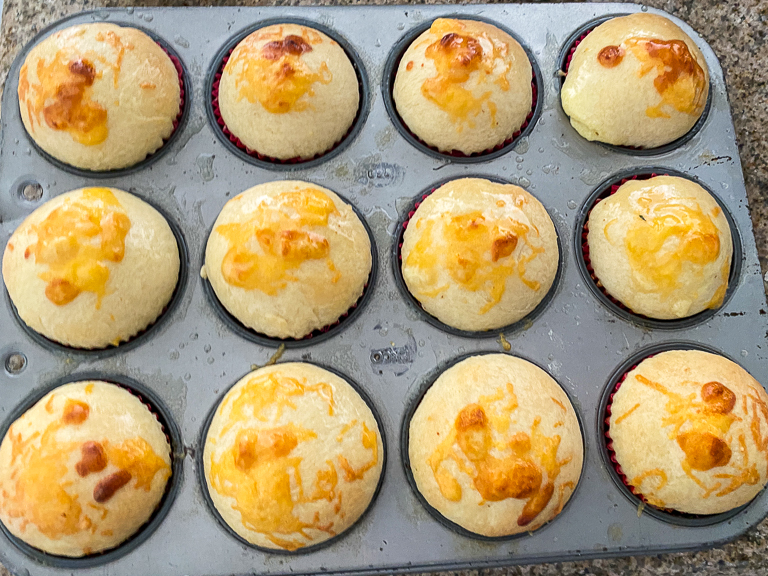 Alli came over to see what was cooking.
Alli - You're making 85C?!?
Yep! She could tell without me even saying what they were! 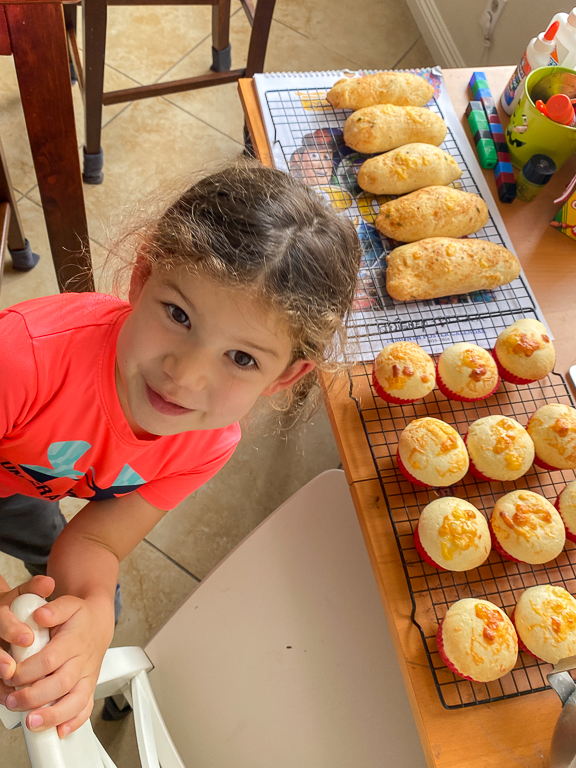 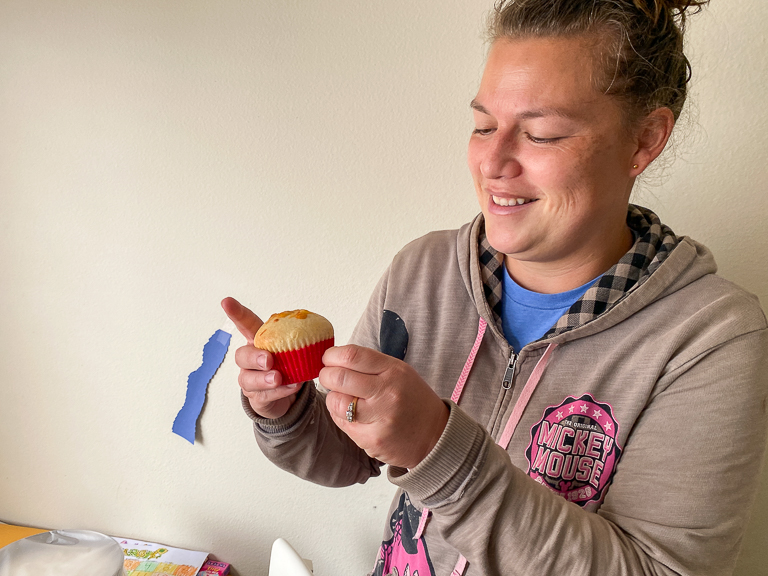 When the chocolate buns came out of the oven, I brushed them with a simple syrup mixture of 1 part sugar to 1 part water. That turned these dull looking buns into the beautiful glossy buns you normally see. 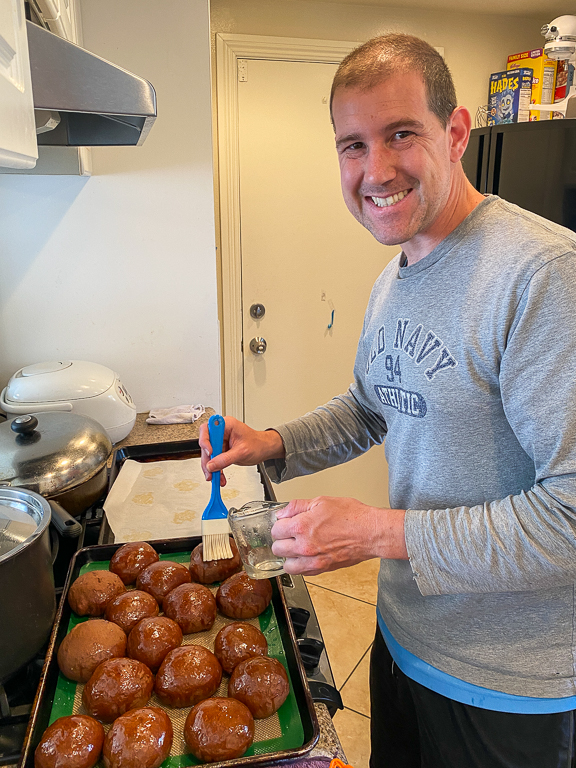 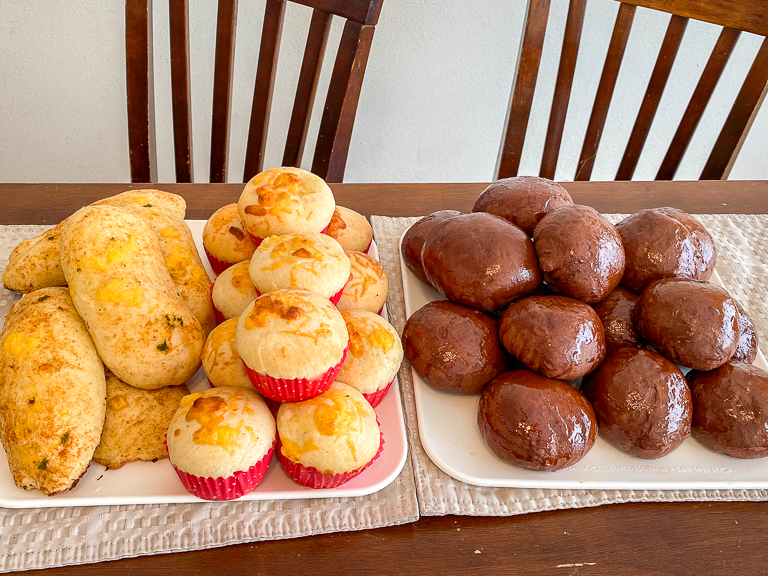 The kids started out with their favorite 85C bun, the garlic bread. Ian did ask me why mine didn't have the crispy cheese on the bottom. His favorite part is the bits of cheese that slide off the bread and gets every toasty and crunchy. I suppose I'll have to try for more of that next time buddy. 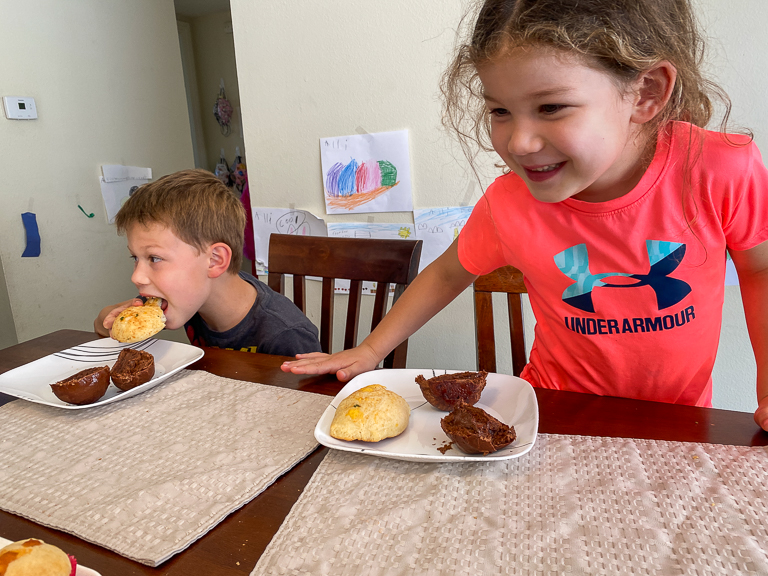 Trying the chocolate bun, which they ended up liking the best out of all the ones they tried. 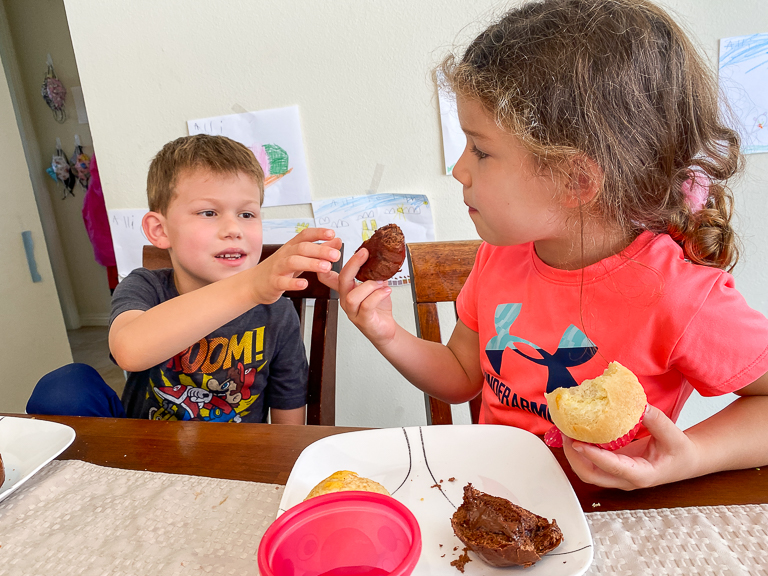 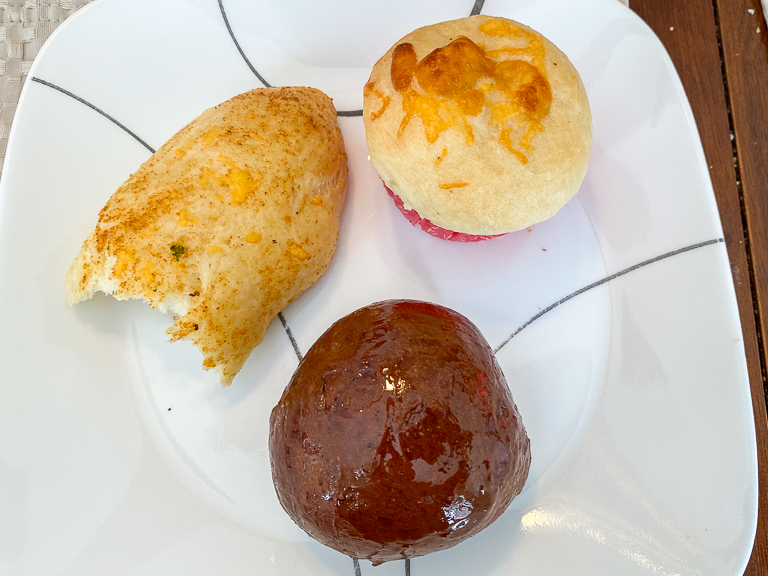 The filled cheese bread came right out of its cupcake wrapped. 85C has breads that are a lot more buttery. I used at least 1.5 sticks of melted butter, just between these and the garlic bread loafs. I probably could have doubled that. 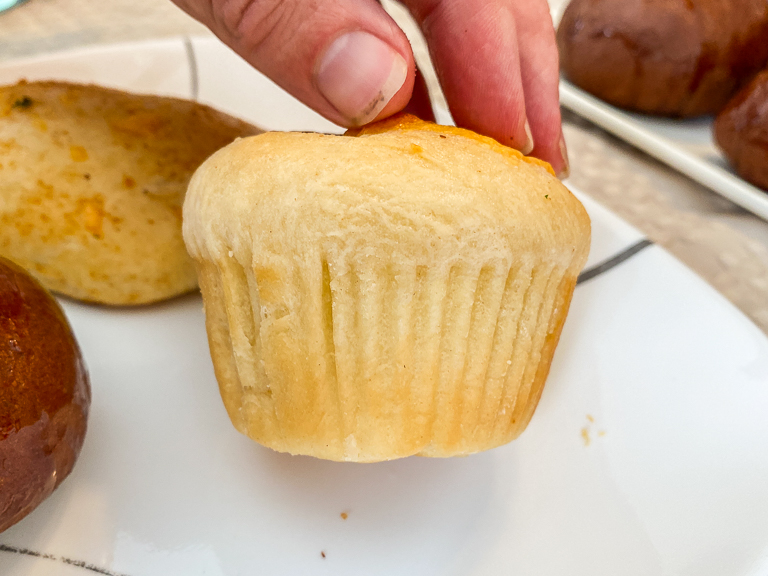 The filling on these, I wasn't too impressed with. By mixing the cream cheese with the flour and egg, I think it make it more of a dough than a soft cheese filling. Definitely something to do different next time. 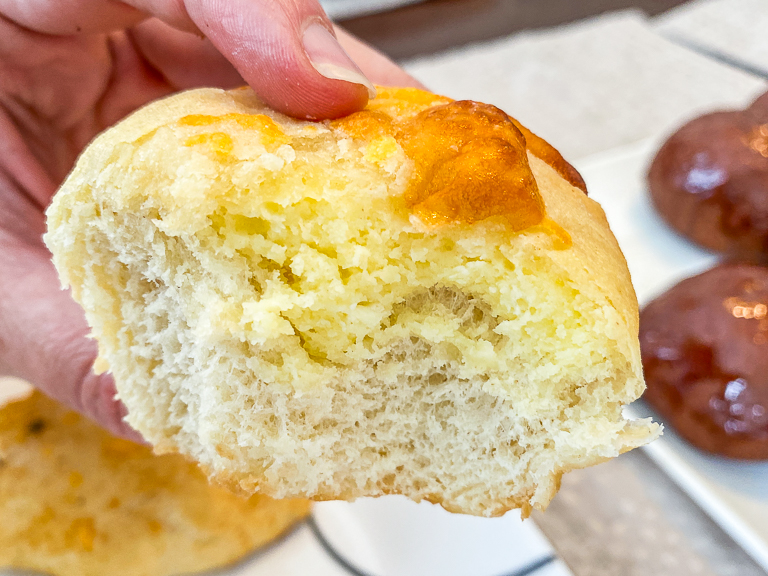 The chocolate bread was so good! I'd dare say that it was just as good (or better) than the ones we'd buy from 85C! 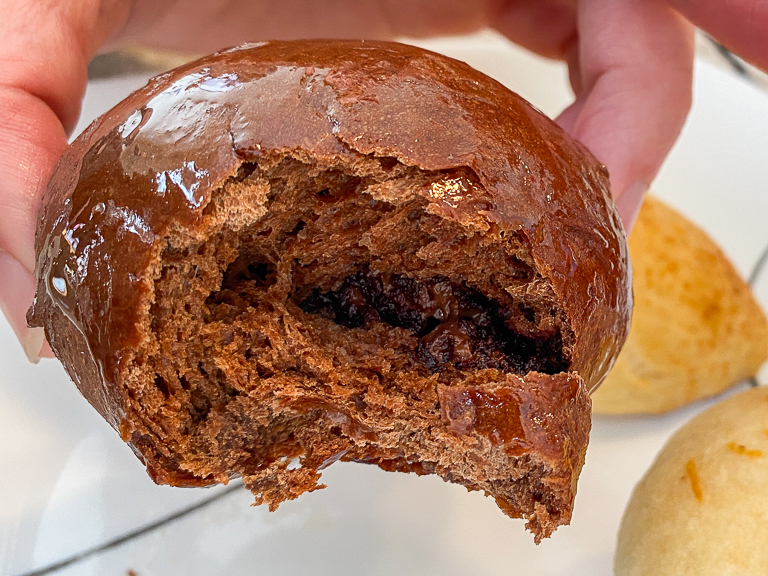 And just because I could, in some of the chocolate buns I put Nutella instead of chocolate chips. Those were every bit as delicious too! 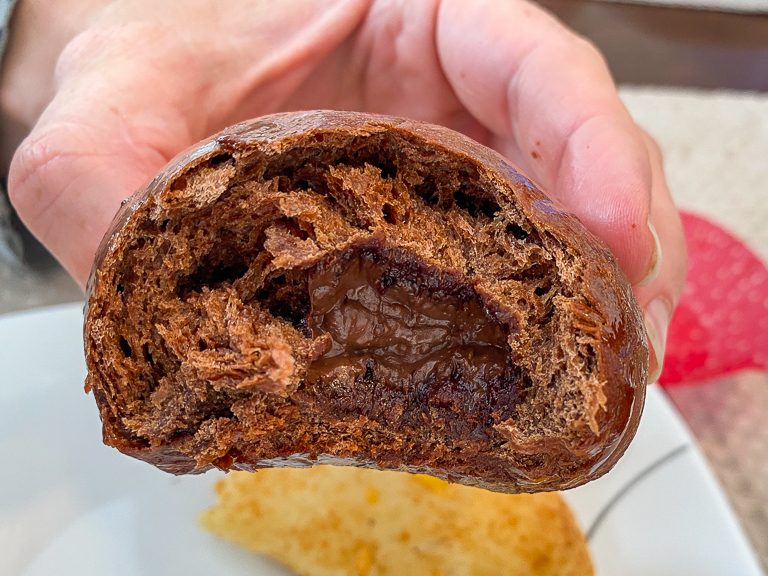 Richard and Chi are here to try them too. Richard said that even though he likes the 85C breads, he liked mine better across the board. Not as greasy or sweet. Thanks Richard!
Well this was a fun one to do. I will definitely be doing some tweaks when these are made again, but for today, I was very happy with how they turned out! 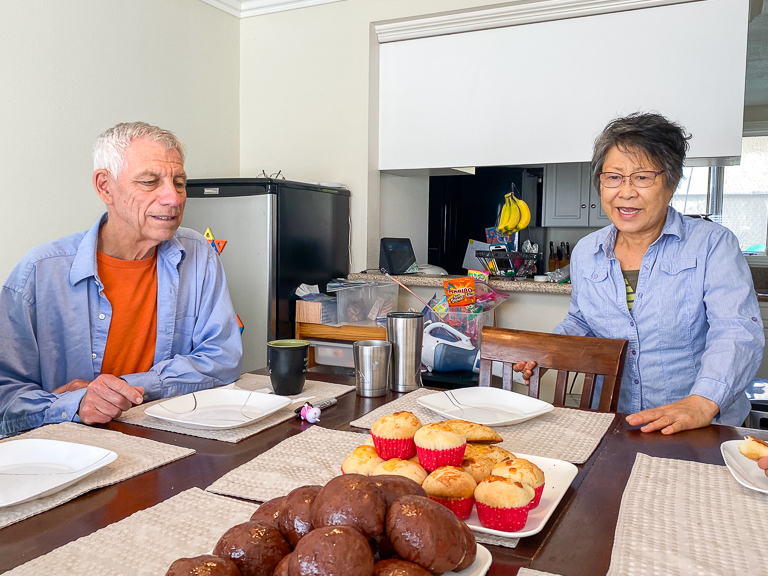