Happy Sunday! Not only is it Easter, but it's also Pizza Day! I had quite a few different ideas in mind for today's pizzas that I'm going to be splitting it into two posts!

To start, we're going to look at our pizzas with Egg. These are Easter Egg Pizzas! 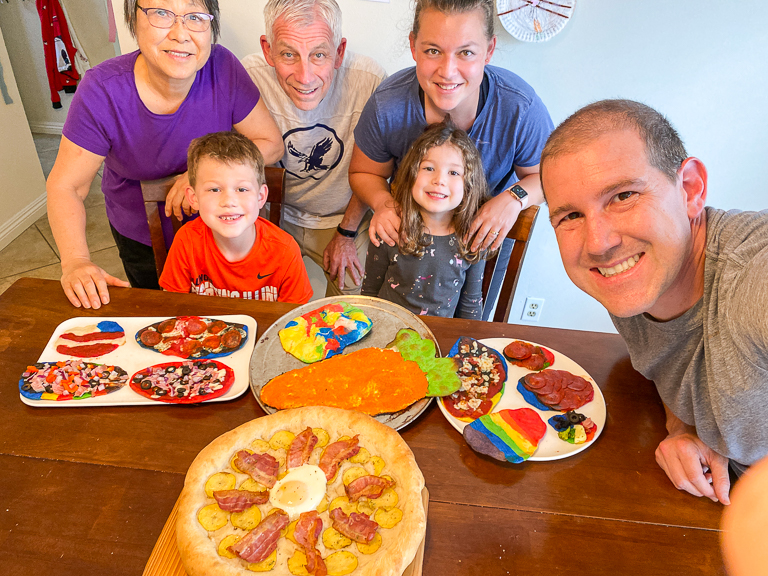 We didn't dye eggs this year, but I have some other ideas in mind for us that I think the kids are really going to like. We're making Easter Egg pizzas and they're going to be brightly colored! I made a quadruple batch of thin crust pizza dough and then brightly colored it using food coloring. With everything else we have going on, that's probably overkill, but the ingredients are cheap and I'd rather not run out of colors. 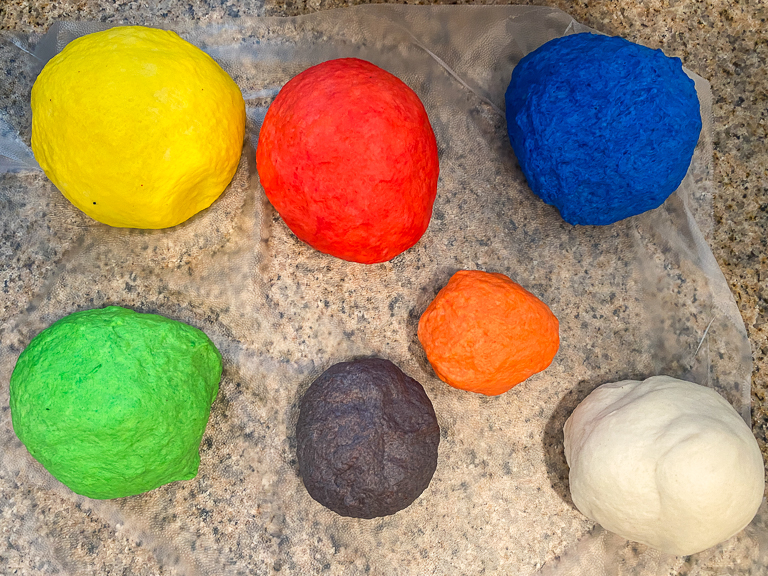 I made it early in the day in order to give the flour plenty of time to hydrate. I wrapped it in plastic and set it aside. I'm making all the colors of the rainbow. 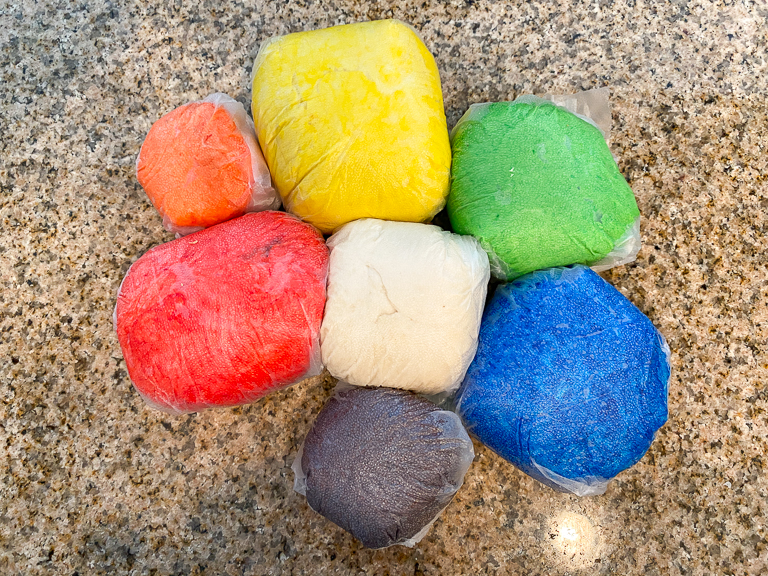 Once we were ready to cook, I pulled out whatever colors I wanted, placed it between to pieces of parchment, flattened it with a pan, then rolled it out to the shape I wanted. 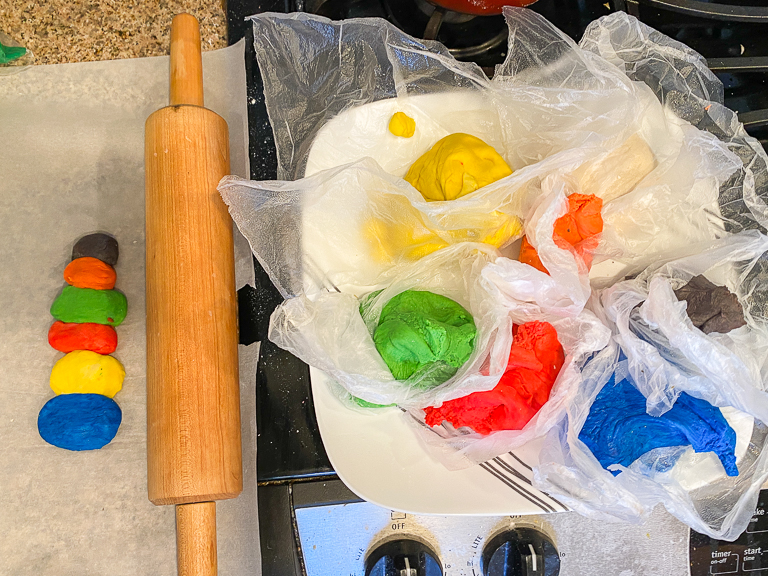 Add sauce, cheese, and topping and you're good to go! 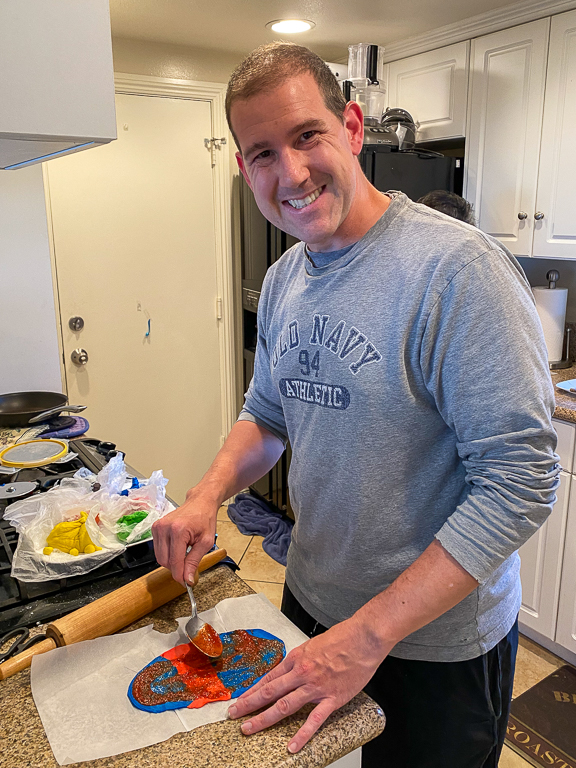 Now that I know the method, it's time for the kids! The dough is almost the texture of playdoh right now, so they can make whatever they want with it. Ian is squishing his flat while Alli is working on her design. 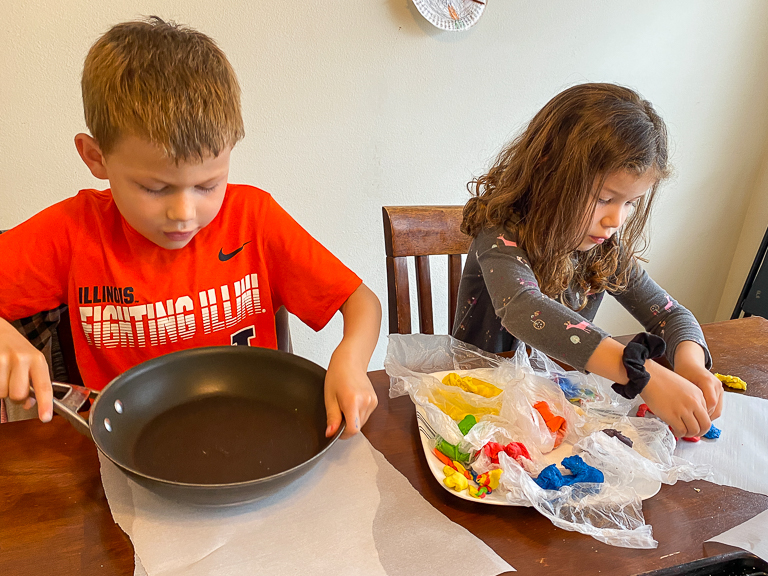 After it was the right shape, Ian used the pizza cutter to trim the flattened dough to be egg-shaped. 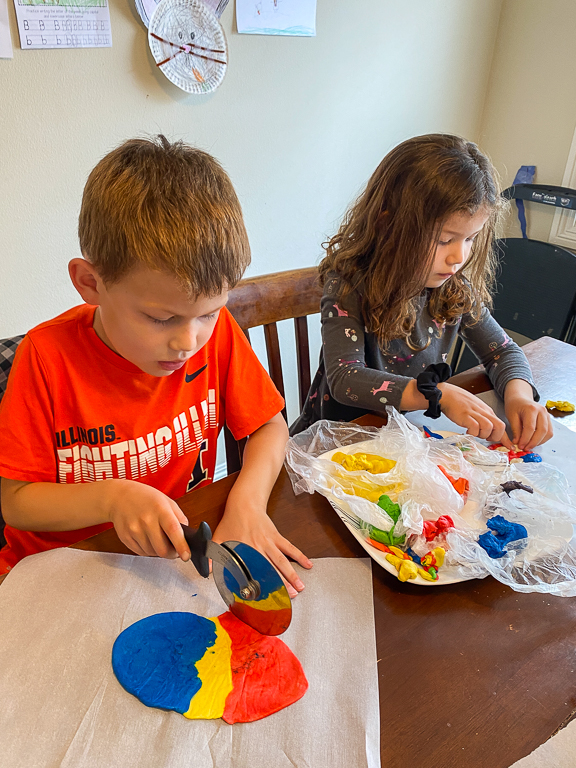 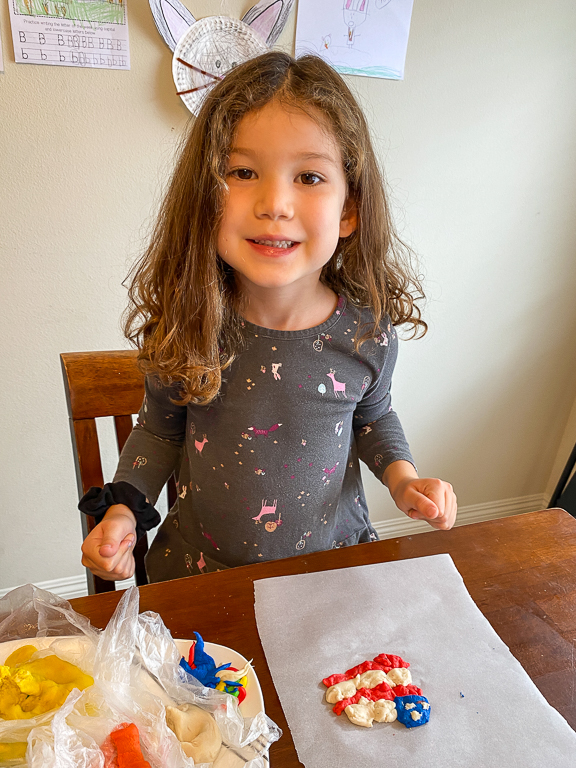 Ian is getting his topped with sauce and pepperoni. Alli is a fan of no toppings, only sauce, on her pizza. She made sure to line the red sauce up with the red stripes of the flag. 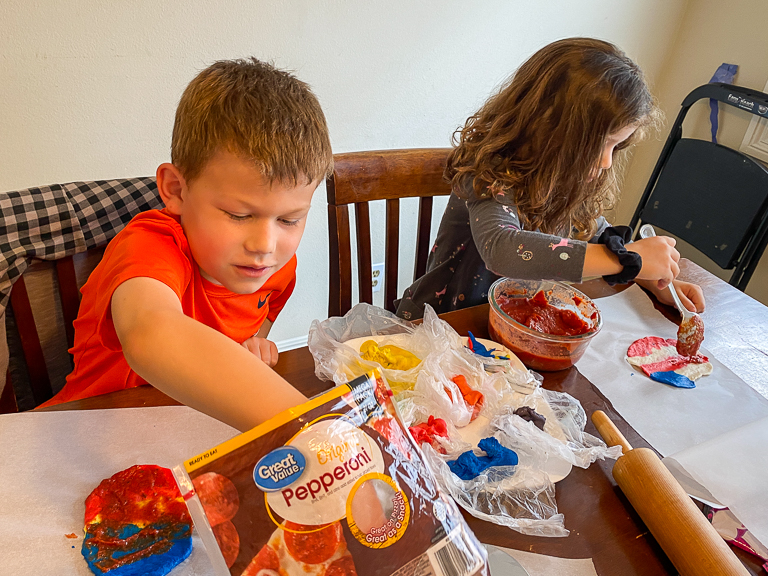 Ian - Can we make another one?
Absolutely! Go crazy guys! 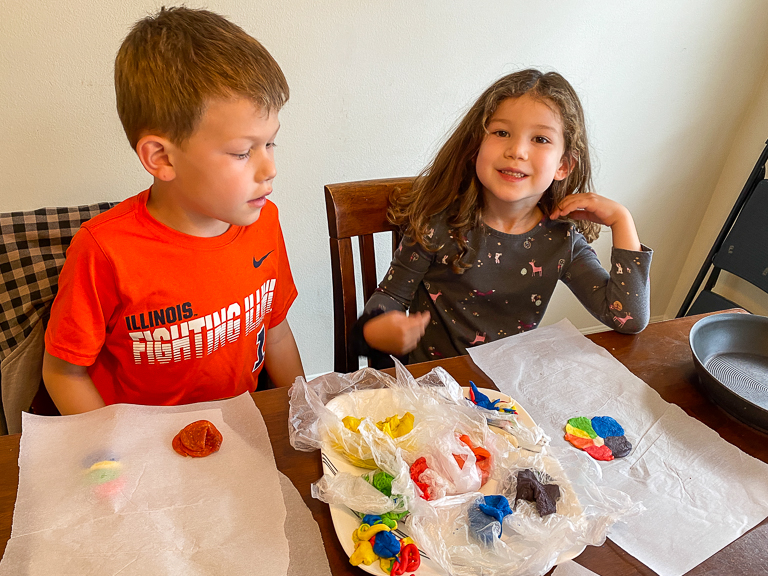 Seeing all the colors I had, Alli decided to make a color wheel. There's even white in the middle! 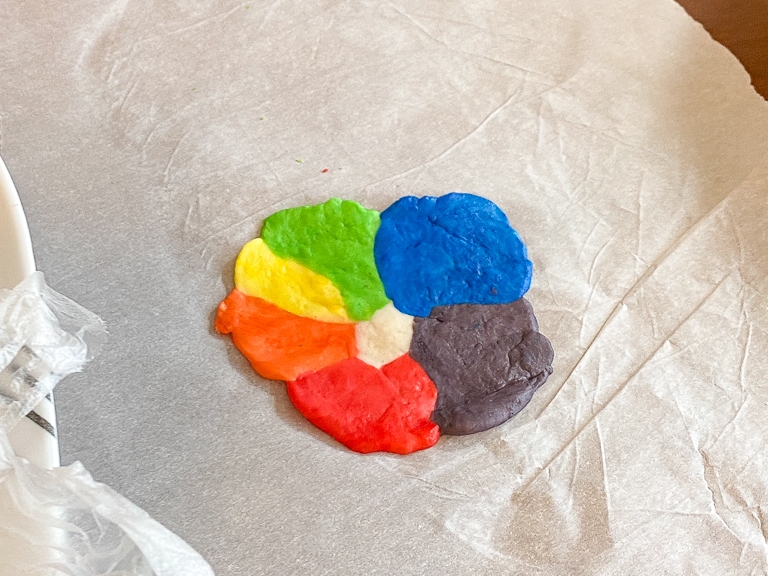 And then to top it, she wanted to match each topping to the color underneath. Red (ham), Orange (bacon), Yellow (pineapple), Green (broccoli), Blue (blueberries), Purple (olives). 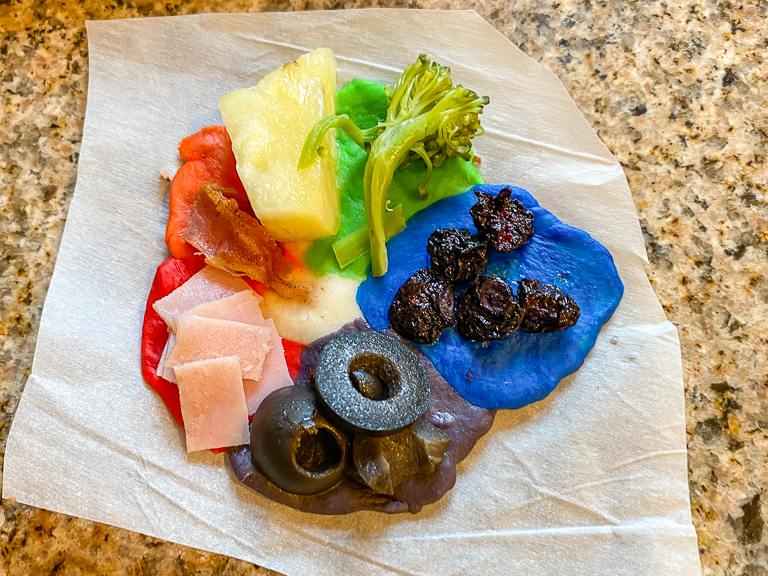 If we're going to do an egg theme today, I wanted to re-visit a pizza I've made before that has an actual egg on it. I tried a new way of making flat bacon today. I got a big flat pan, put another pan on top, and heated them both up to hot. Once they were at temperature, I put raw pieces of bacon on the surface, then put the heavy pan back on top. It only took a minute or so for the bacon to get where I wanted it. Not 100% cooked since it'll be going into a screaming hot oven shortly. 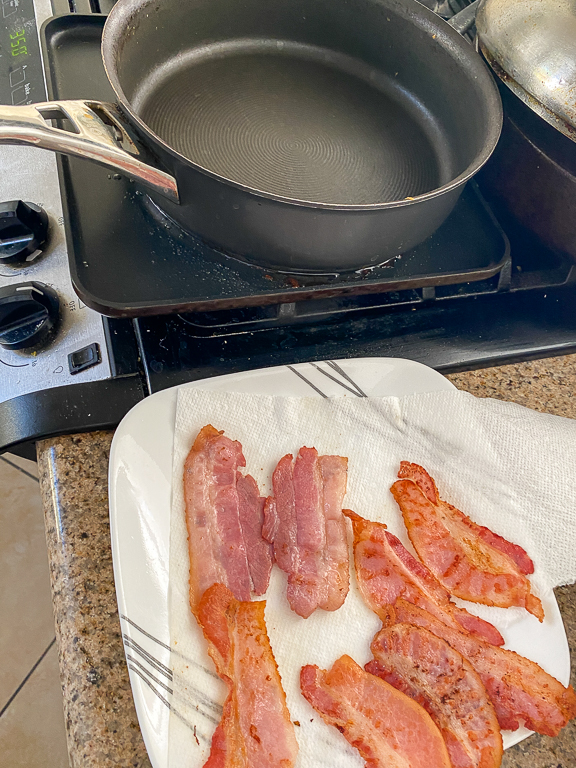 I used my pizza dough recipe, topped it with golden potatoes that had been tossed with oil, salt, and pepper, and cooked that for 8 minutes. After that, the bacon and a raw egg went on top. It then cooked for 6 more minutes. 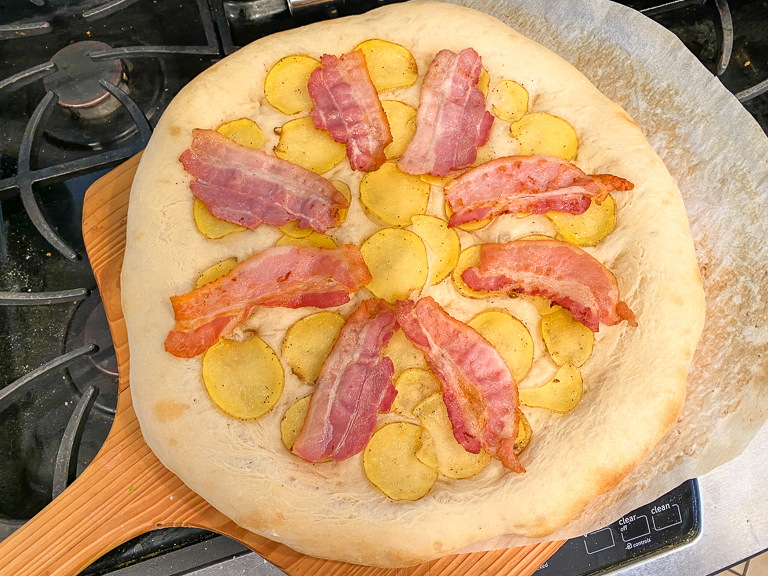 Wow, that's quite the pizza spread tonight! Ignore the carrot for now. That'll be later. 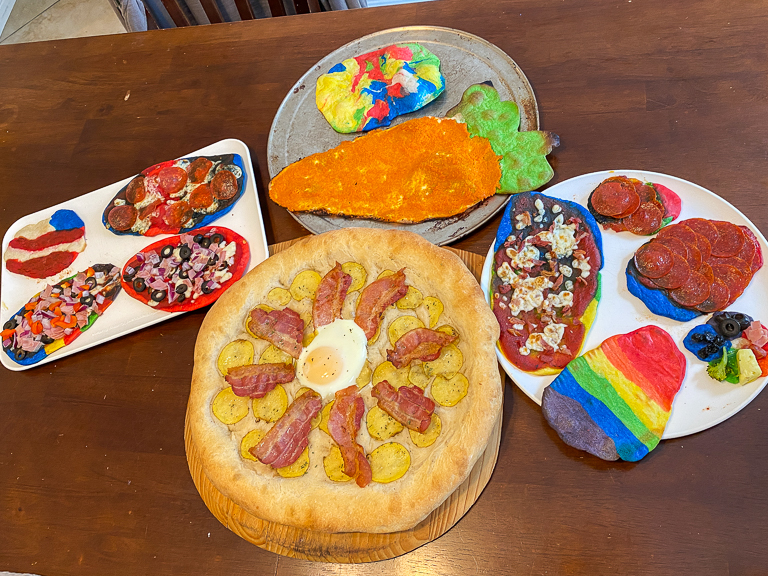 Theresa added some rosemary that had been freshly picked. But I'm really wondering about that egg. Last time it was overdone. What's it today? 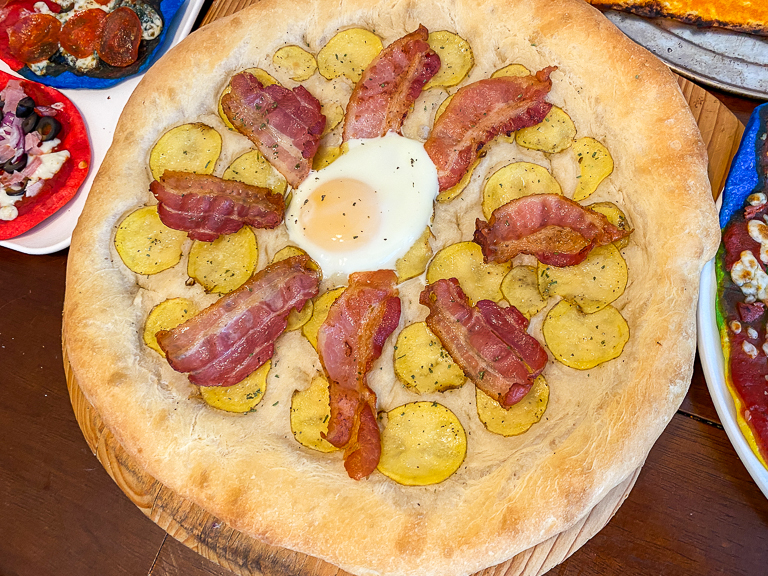 Yum! Runny and warm! Just what I was aiming for! 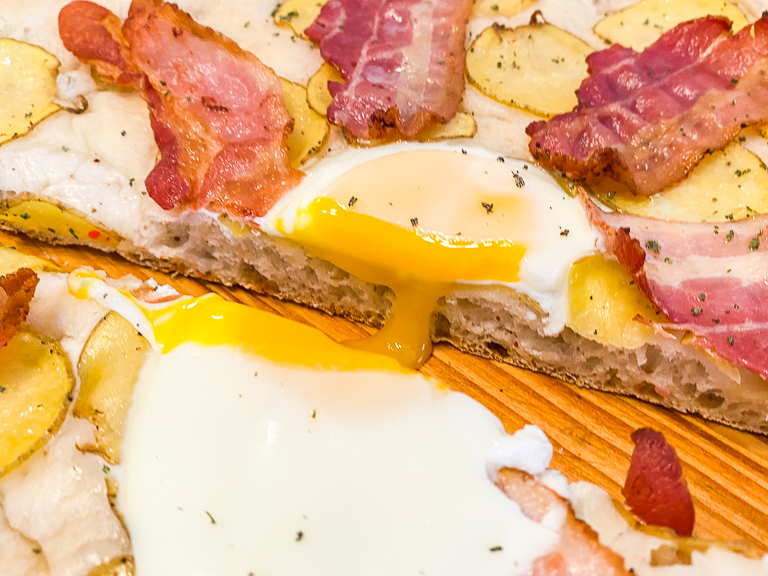 The rest of the pizzas turned out great! This thin crust dough holds together well and doesn't rise or anything which would mess up the shape. Everyone made their pizzas, plus there's a few "dippers" that are good with honey. 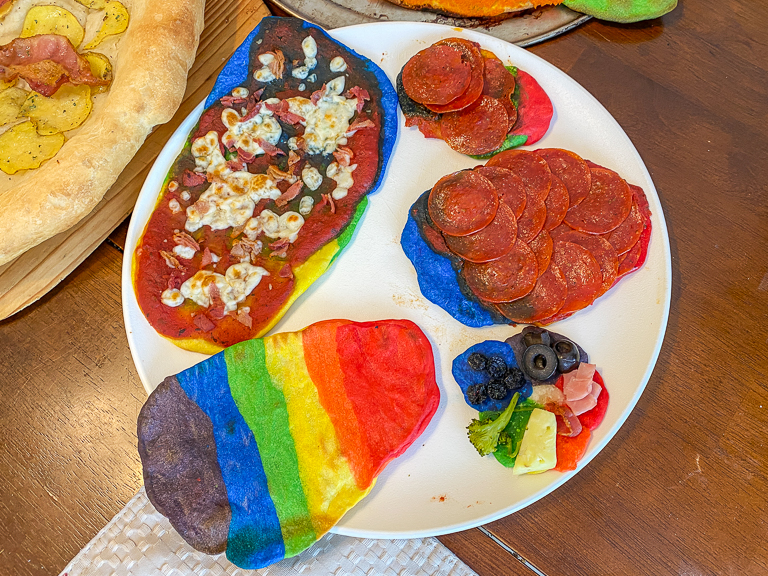 The other plate of Easter Egg Pizzas. 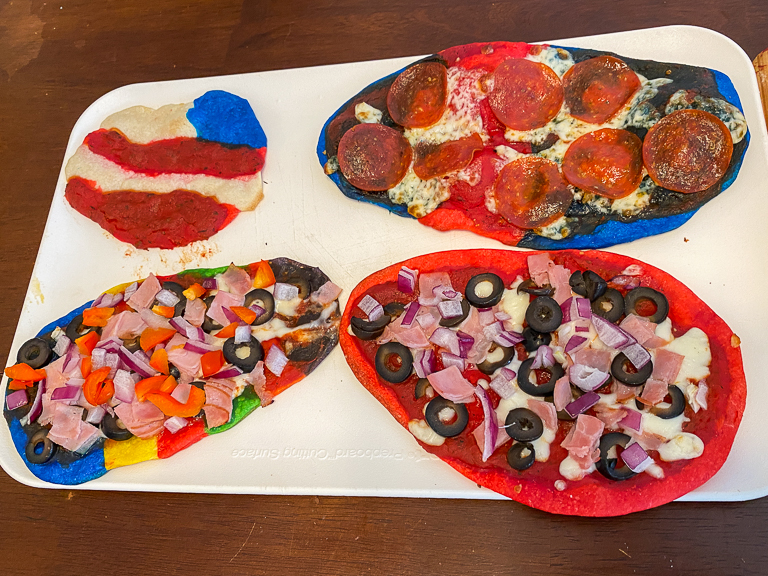 I guess the only downside is that the pizza designs are covered up with toppings and sauce, so you can't really see what's going on. The other option is looking from the bottom. Alli's flag. 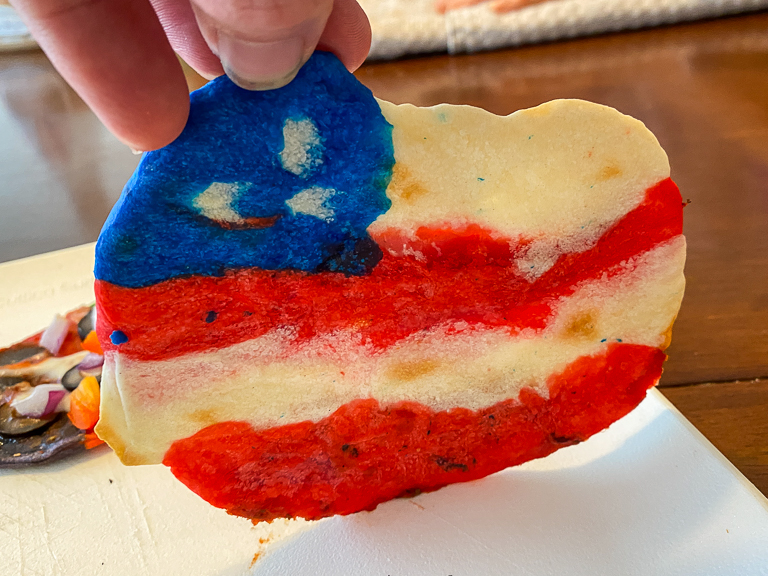 A polka-dot egg I made. 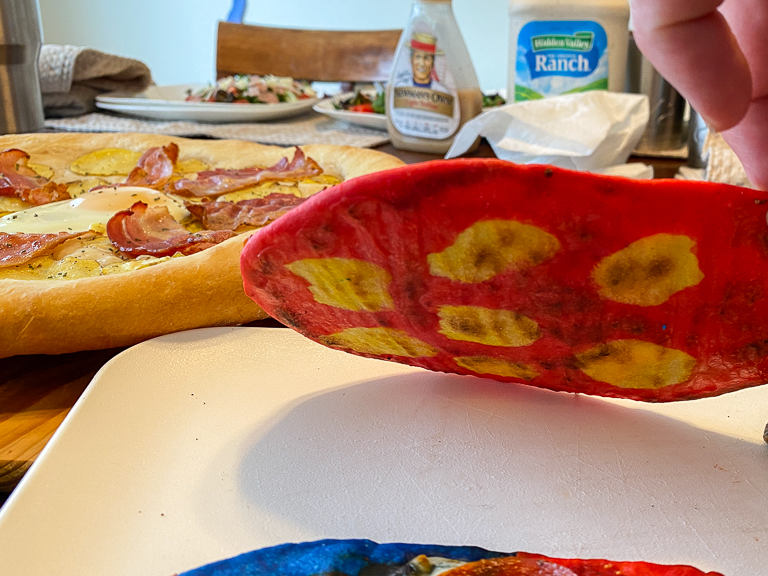 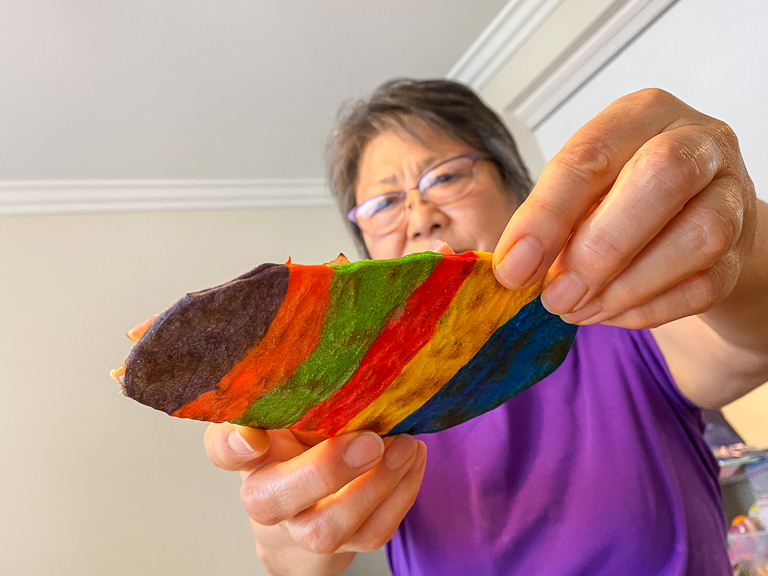 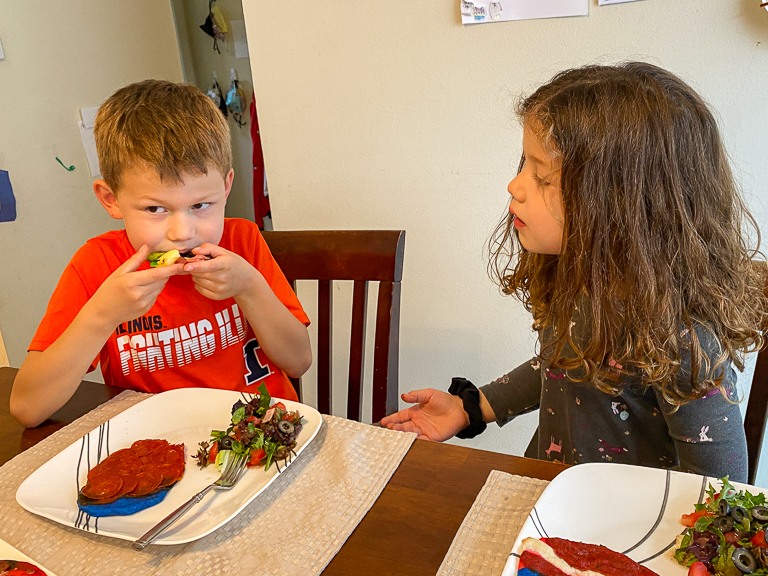 My plate tonight with a little bit of everything. 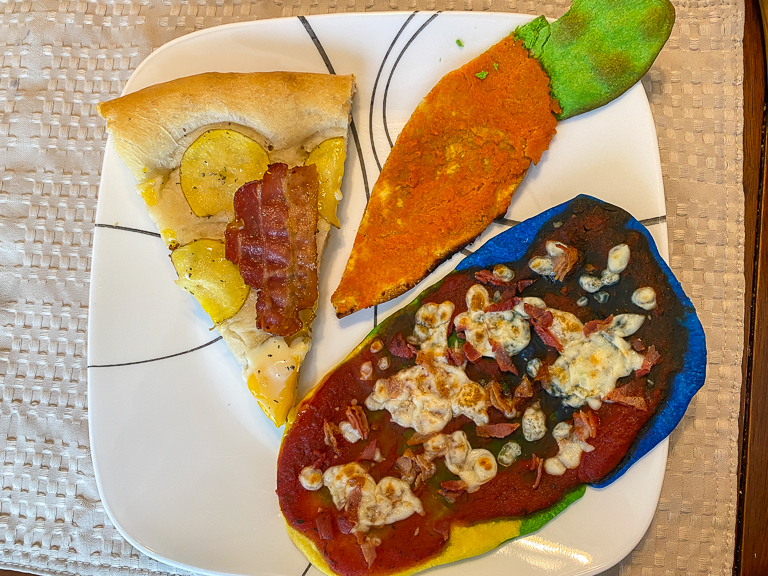 After finishing her two pizzas she made, plus a salad, she was still hungry. I gave her my rainbow egg, which she dipped in honey and then completely devoured!
Our Easter Egg pizzas were great today! 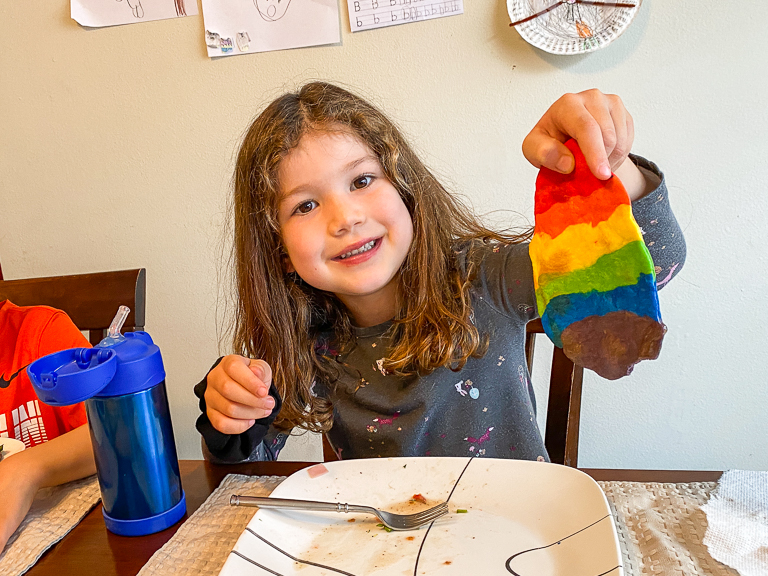