We're "Safer At Home" here in Los Angeles, but that doesn't mean we can't still find fun things to do. There's lots of things people around the neighborhood are doing to stay in good spirits. Bears in the windows for people on a "Bear Hunt", leaving extra fruit out from a tree in the backyard for anyone to take, and smiling and waving as people pass by on their inevitable walks.

I heard about the #chalkyourwalk where people were writing encouraging messages for people to enjoy on their walks as well. At about this time, Ruston and I would usually be thinking out our Pasadena Chalk Festival entry and maybe even have a practice session. I think we can make something pretty cool. The kids have always wanted to help on a mural and they were excited that they'd get to help out today. 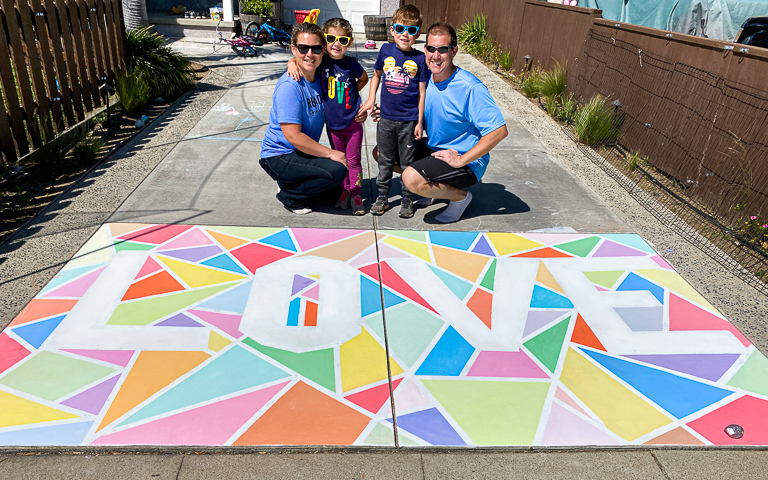 If you've seen us do this before, you'll know that it starts with a base coat. And from experience, the best way to do that is to use a paint roller. 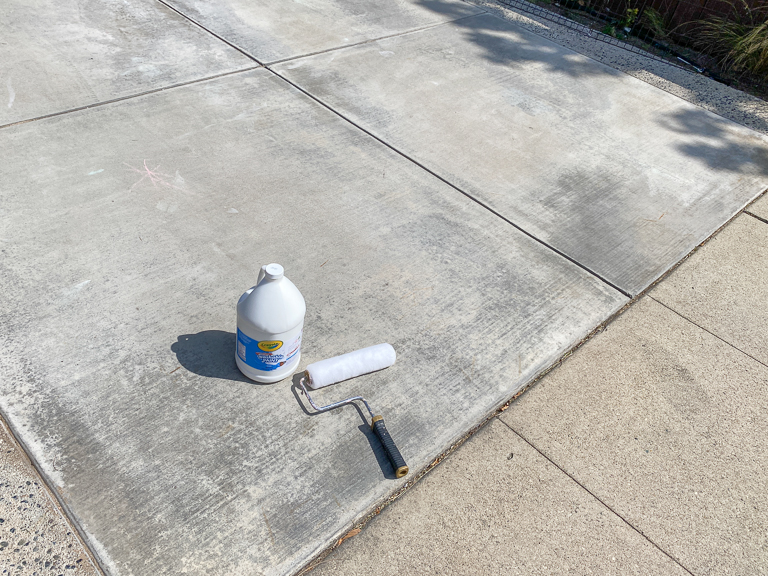 After I got the first coat on, Ian came behind with the very important second coat. 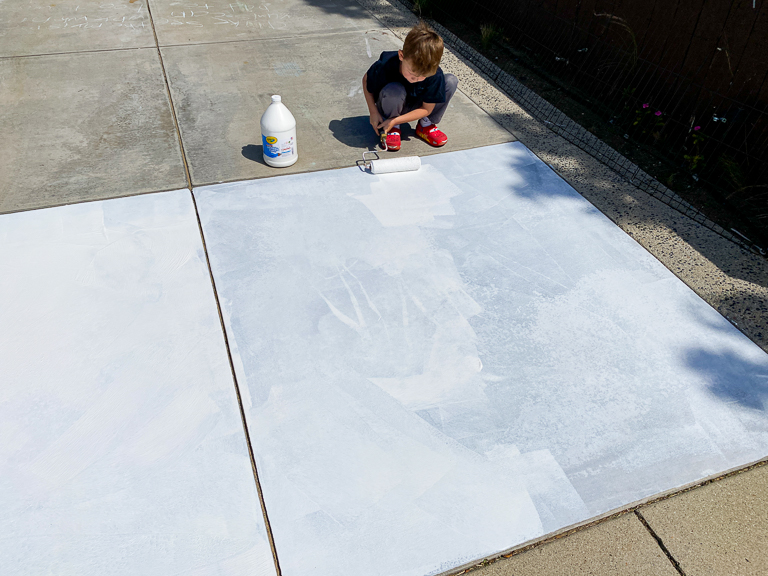 How do you get the middle? It takes two.

The next day, around 10:30am, everyone headed outside and started getting the area taped off. I've seen some pretty simple mosaics that looked pretty cool. Let's do that!
Now, being short on storage space, my entire bin of chalk products (pastels, tape, plastic wrap, boogie boards, keep-out cones) stay at Ruston's house all year. Luckily we don't need much of that. In lieu of painters tape, I raided the kid's craft tape. Good enough. I taped out the word LOVE. 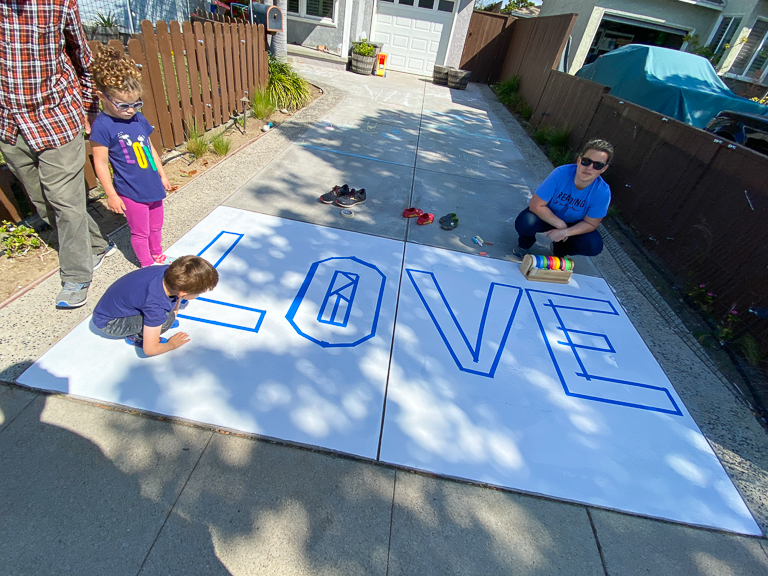 And then we put random pieces of tape every which way. 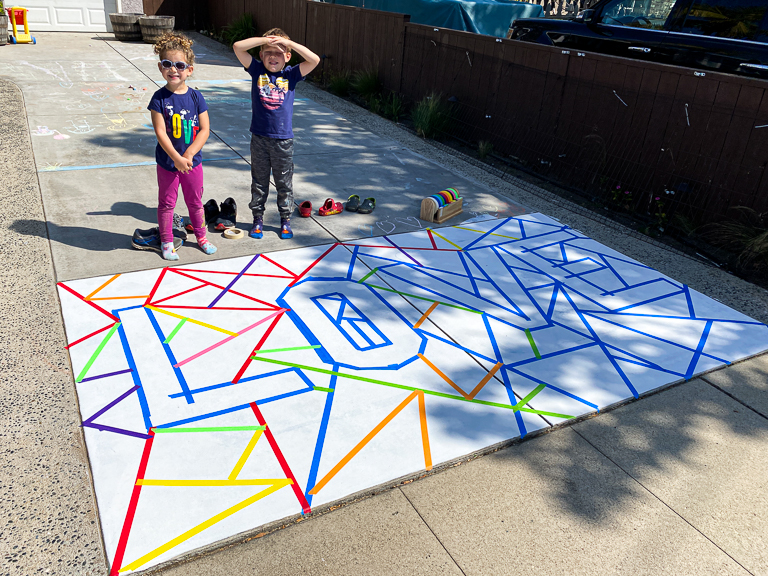 The kids have a ton of chalk, but since today is a special day, we're breaking out a brand new box of Crayola Sidewalk Chalk. 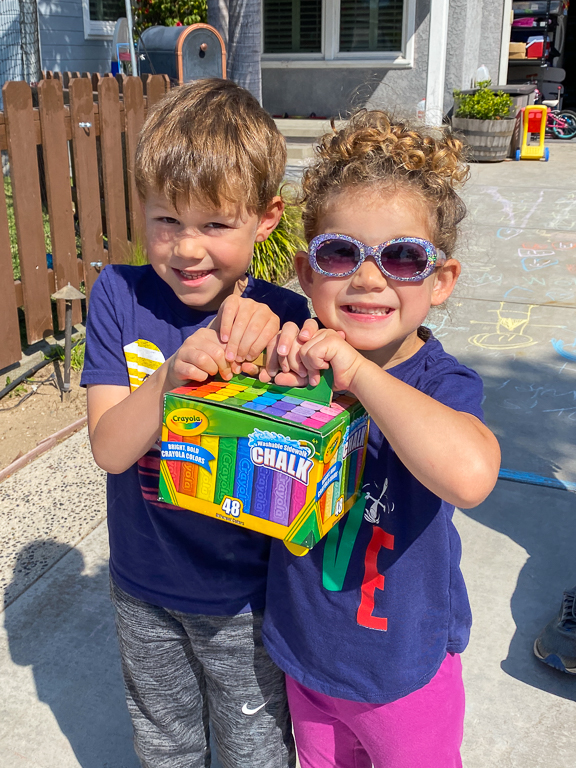 Just like how there's not much a better sight than a fresh pack of crayons, the sight of a fresh box of sidewalk chalk is equally beautiful. 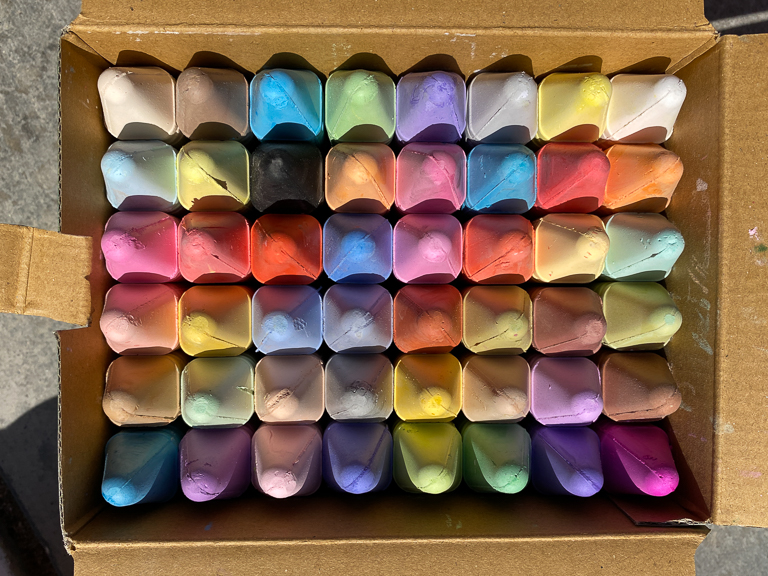 By 11am, everyone was ready to start chalking. 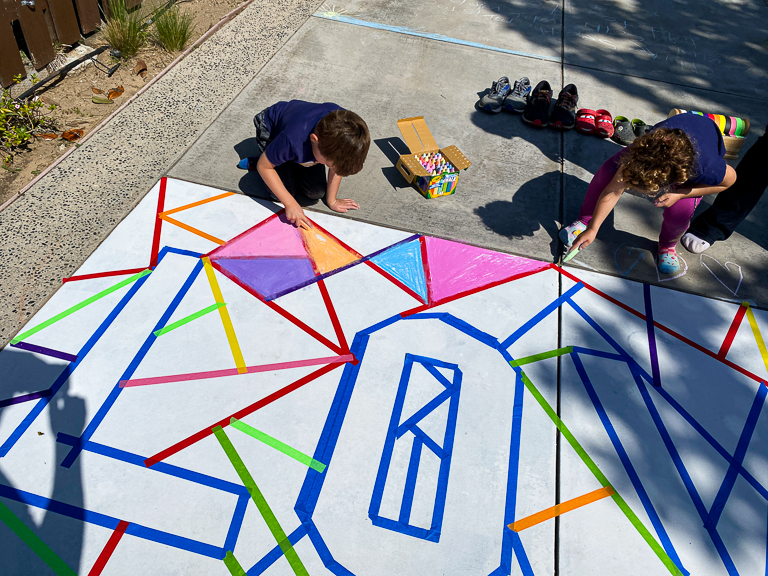 The kids had a system. They'd pick a section, hold up a piece of chalk and verify it was a good color to use with Theresa or myself, and then color it all in. They'd also make sure to rub that chalk into the pavement to make a nice smooth color. 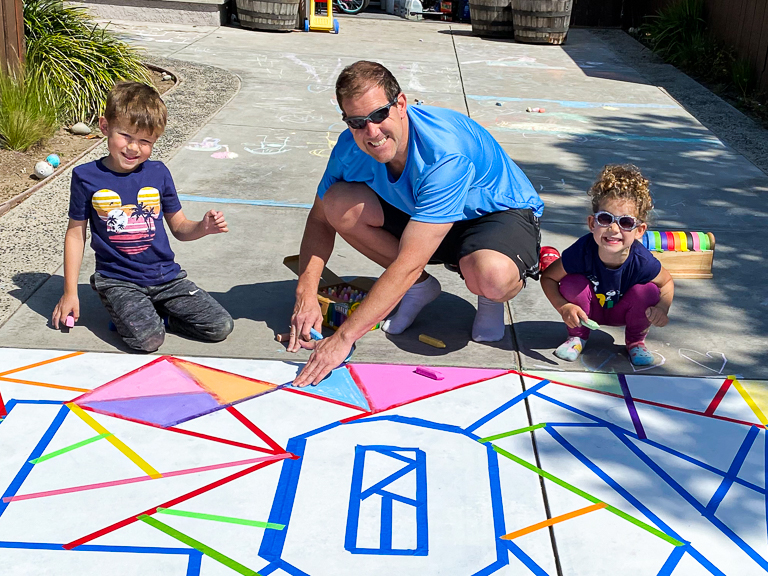 While the kids worked the outsides, Theresa and I worked on the insides, always making sure that the color was not matching any of the colors surrounding it. 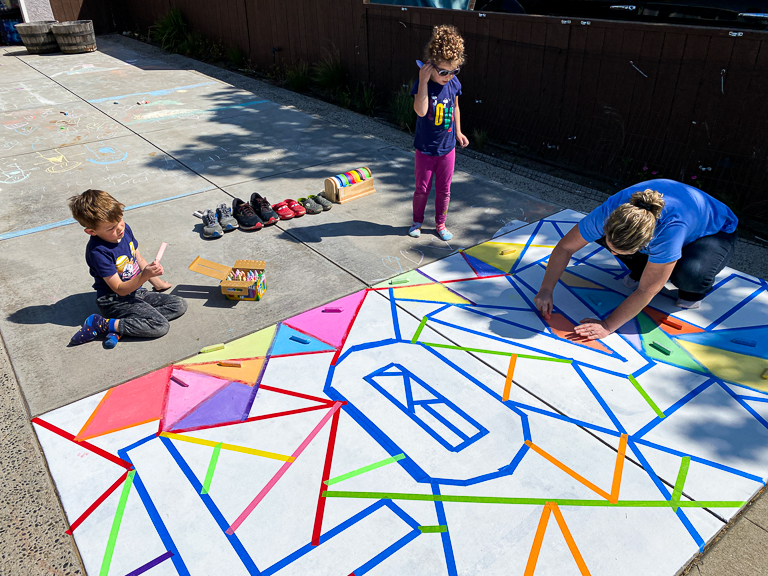 Making really good progress. The kids were awesome. Alli and Ian didn't take a break until we were completely finished. 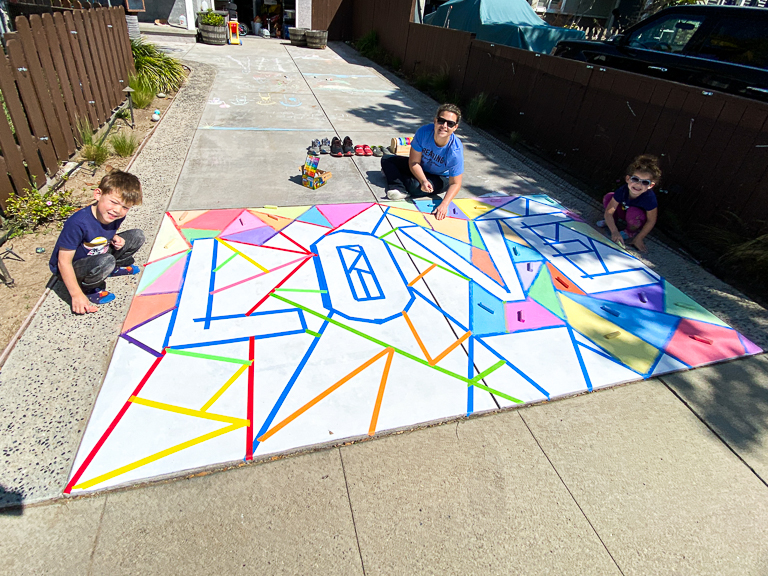 Theresa putting down the last triangle of color. While we were working, I had everyone leave the chalk they were using in the square when they finished. That way, going back and doing touchups would be super easy. Barely an inconvenience. 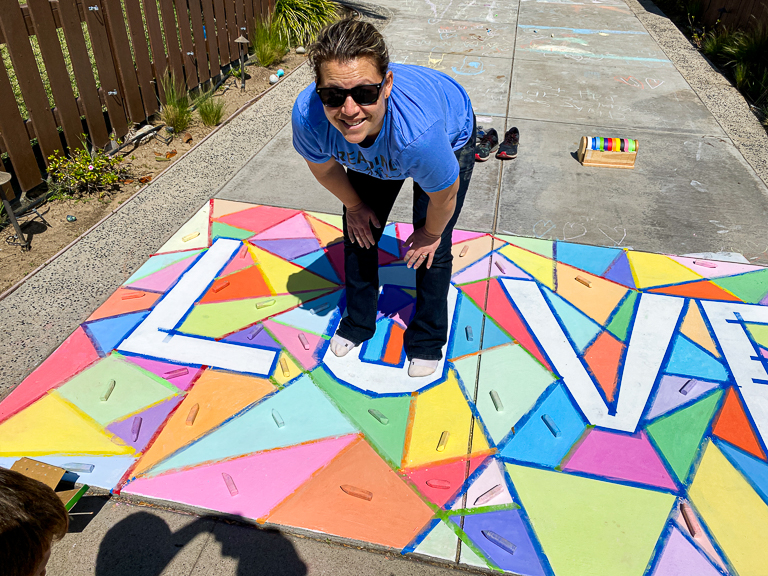 It kinda looks cool with all the pieces of chalk still in the middle. 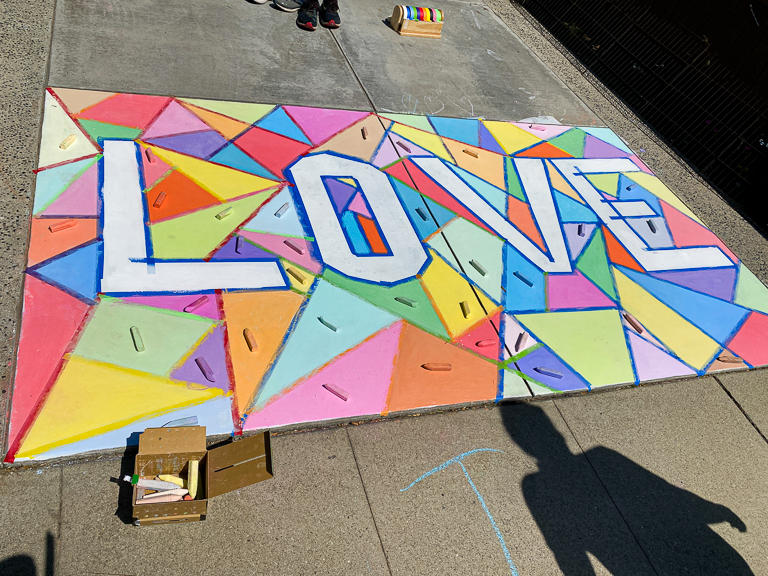 An hour after we started, it was done. Many hands do indeed make for light work. 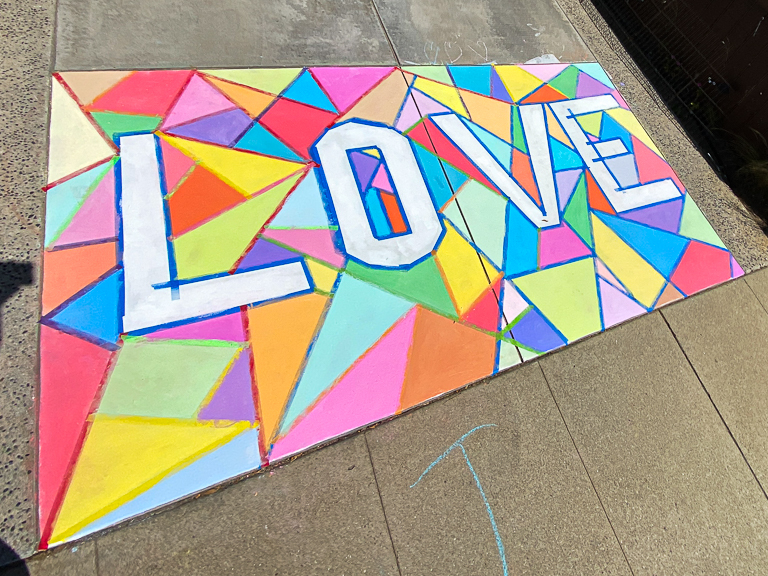 Before we pull all this tape off, I want to get a family photo. I mean, it looks awesome, even with the tape still on it, but the tape won't last very long outside in the elements. 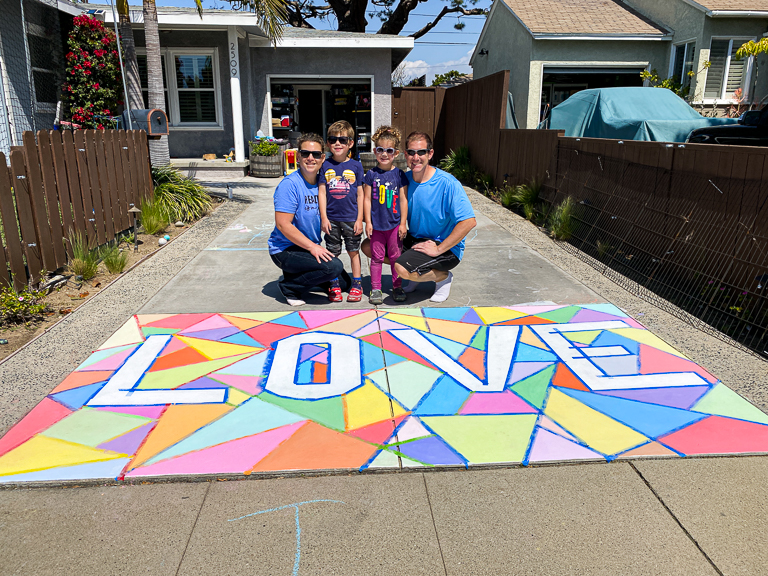 We pulled the tape off and... eww. What happened? 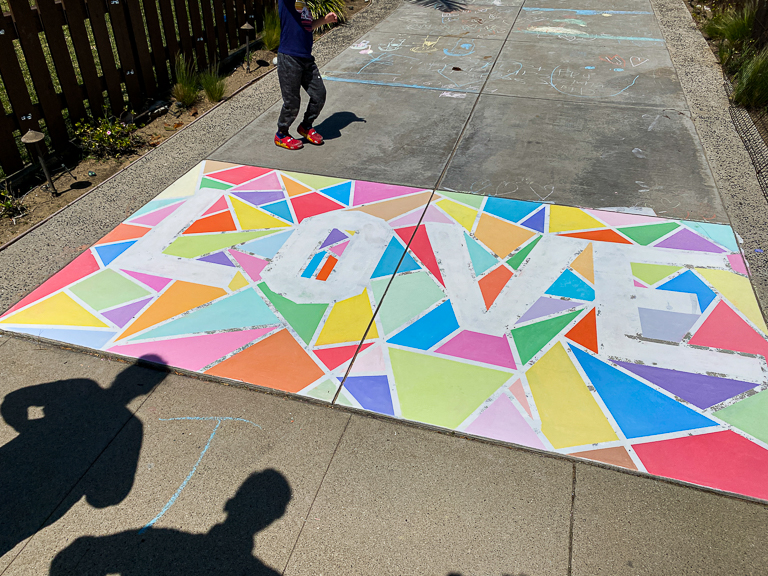 The tape was super sticky, pulling up the base coat and exposing the gray driveway underneath. I don't know if it was the base, the tape, or some combination of both. But for next time, I'm never using the kids' tape again. I'll stick with the blue painters tape only. 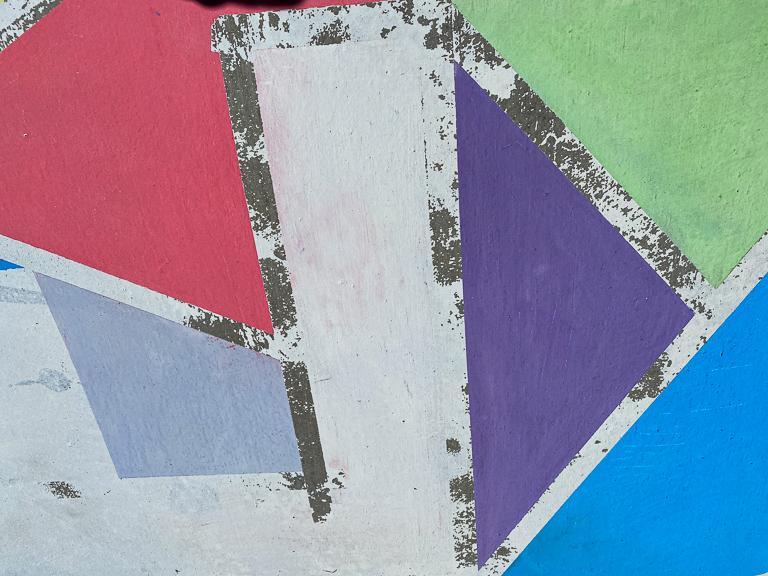 Theresa and I grabbed some paint brushes and touched up all the spots that needed it. 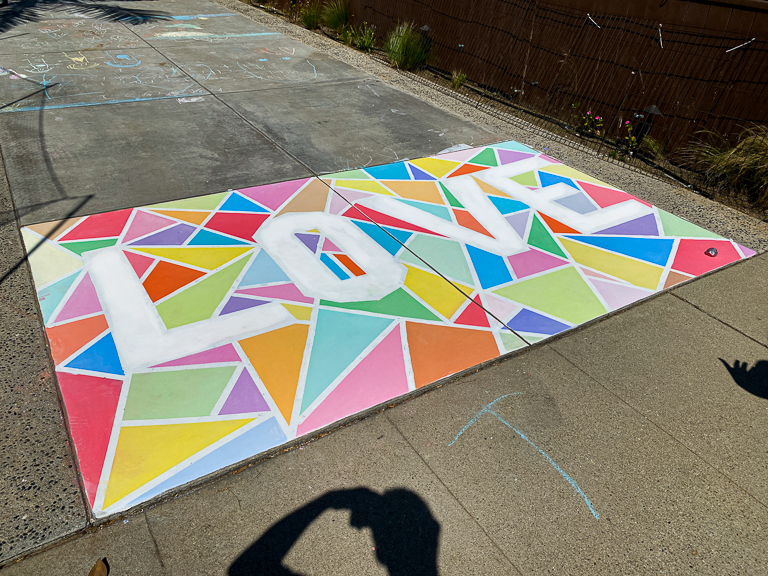 And look at that. Somewhere in our neighborhood there's someone who likes to paint rocks with inspirational messages too. When we got back from a walk, this was waiting for us. 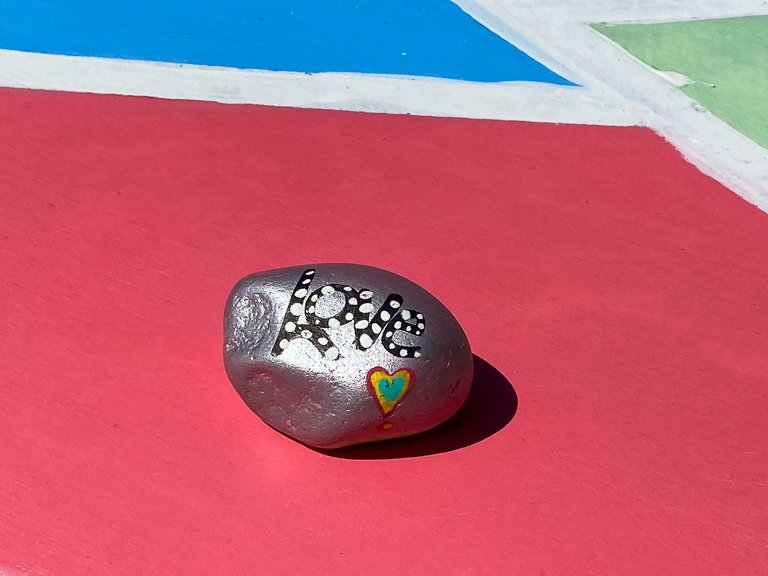 If you've already noticed Alli's shirt, then good job observing the details. Today we're trying to spread a little love to the neighborhood. And so far we've been getting lots of people stopping and taking pictures. This mural has generated lots of smiles. Just what we were after. 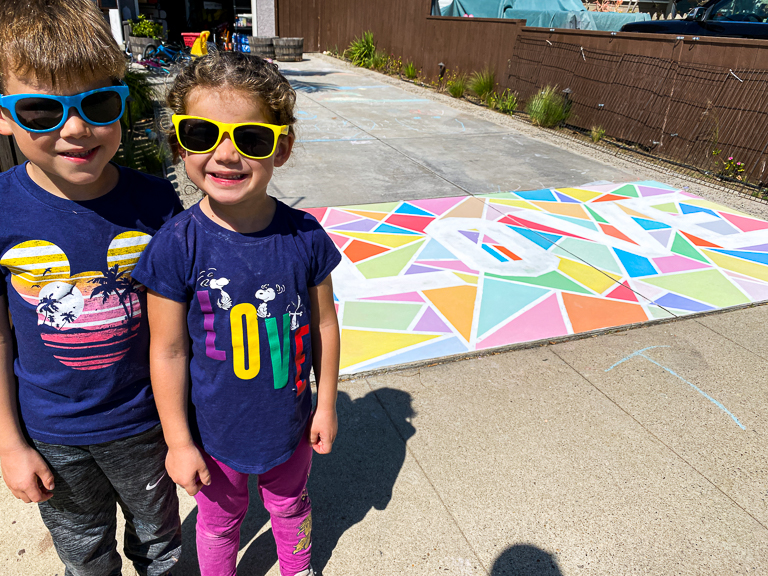 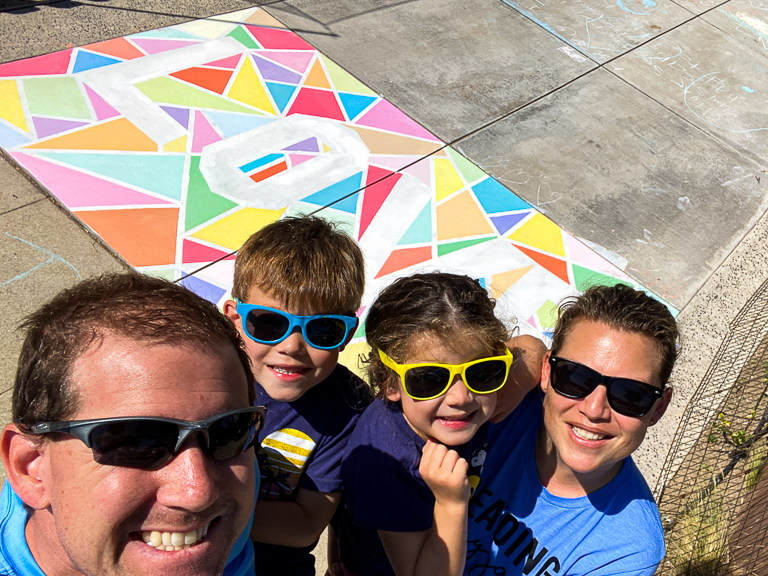