This is a week of Halloween Treats! So what does that mean for our regular Sunday pizza? On a whim, I googled recipes for a Pumpkin Pizza and happened to find a few recipes that might actually turn out pretty good.

Well this is definitely going to be something new! We're going to make a Pumpkin Pizza this week! 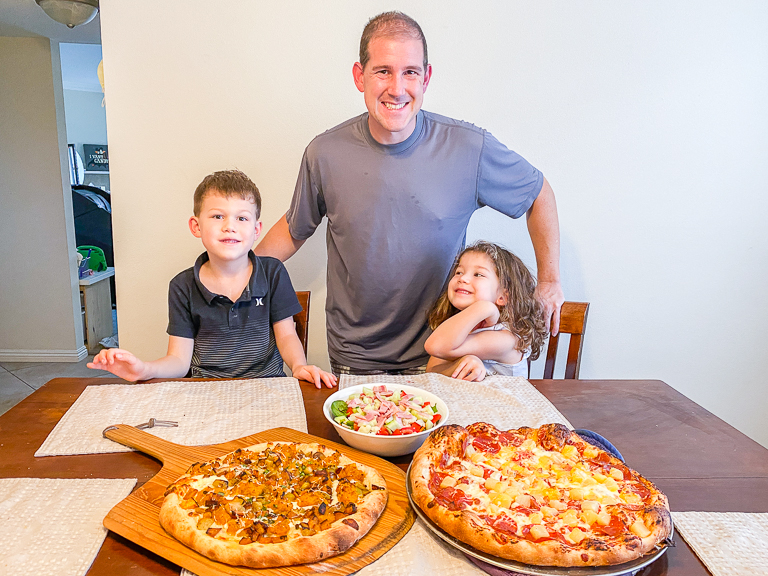 Our recipe today is from seriouseats.com and is titled The Best Pumpkin Pizza Recipe. We're going to be using a Japanese Pumpkin, also known as Kabocha. Chi found them at our local Korean market. 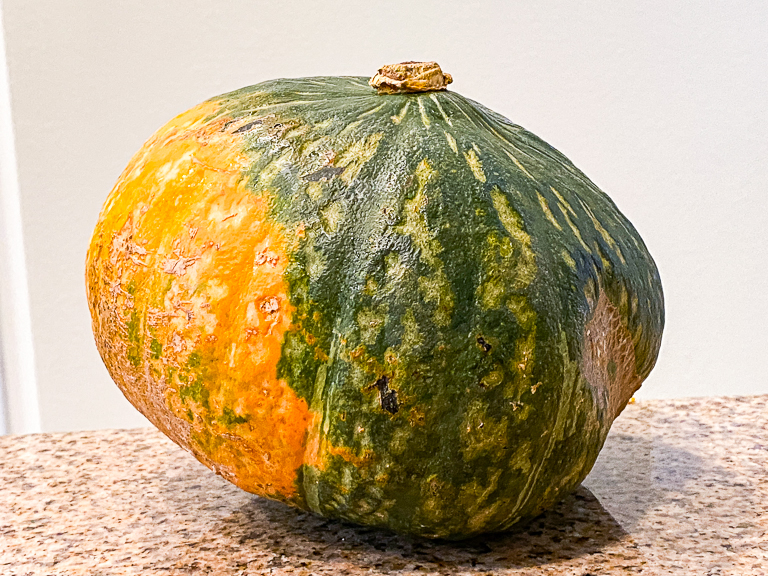 Upon splitting it open, Theresa said that we got a good one. It's hard to pick kabocha, but if you find one that's a darker orange inside, you've got a good one. A lighter one won't have as good of a flavor. 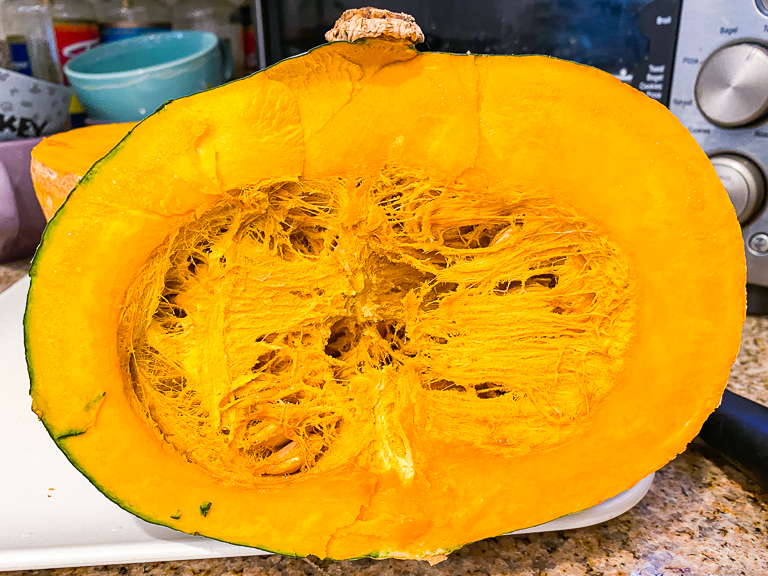 These Kabocha are pretty firm, and cutting them into slices isn't easy. 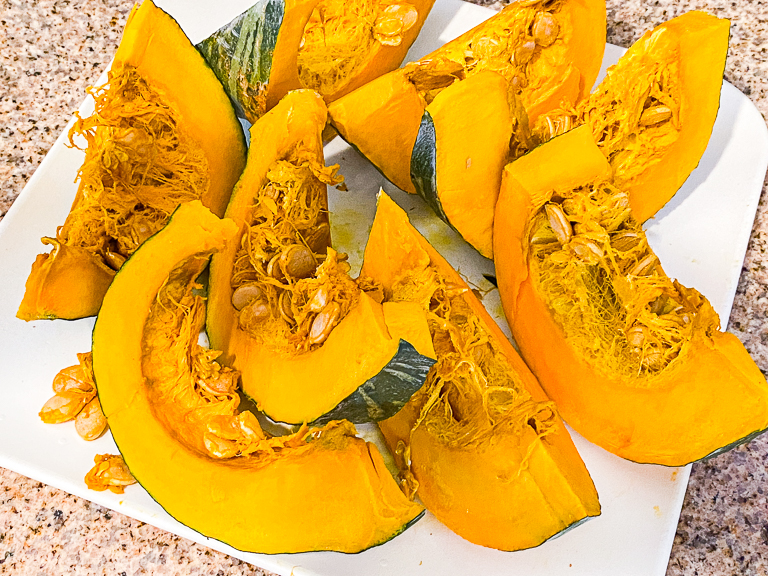 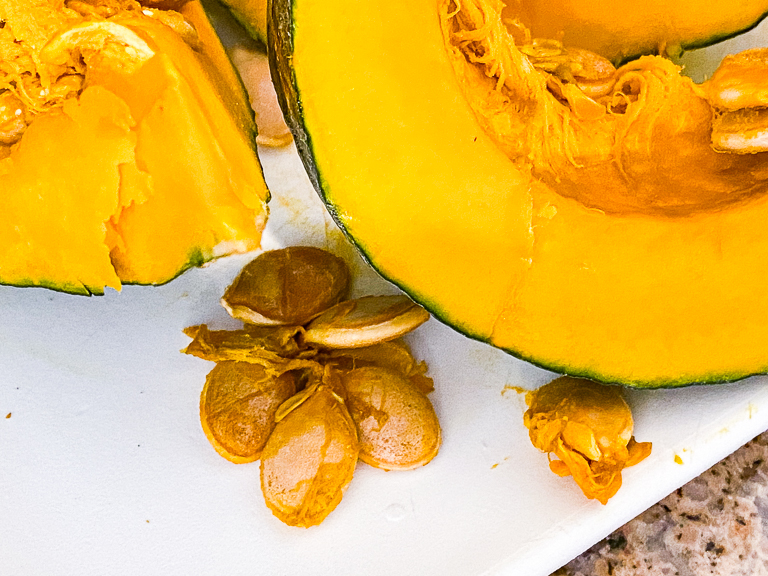 When we carve pumpkins for Halloween, I use an ice cream scoop to clean out the insides of the pumpkins. It worked out pretty well here too. 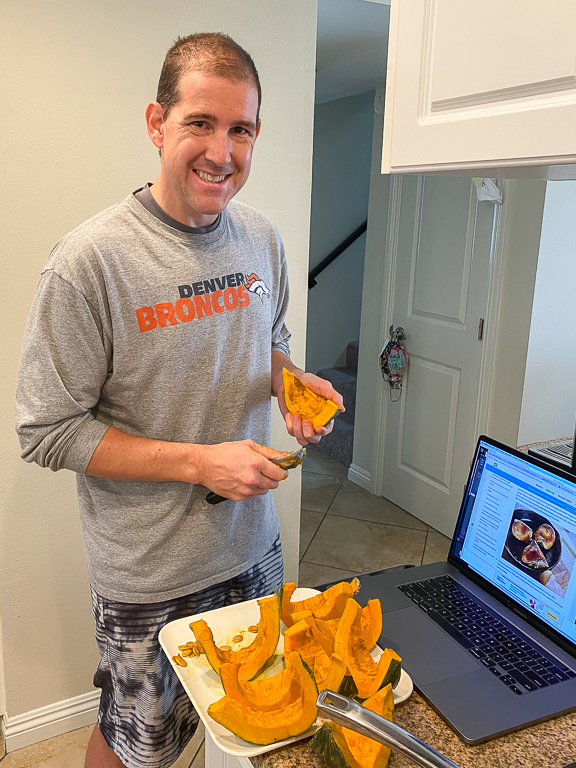 Coated with oil and then roasted in the oven for 45 minutes, they come out soft and looking like this. I scooped the soft flesh into a bowl, mixed it with honey, cinnamon, nutmeg, and salt. But that's just half of the pumpkin topping for our pizza. 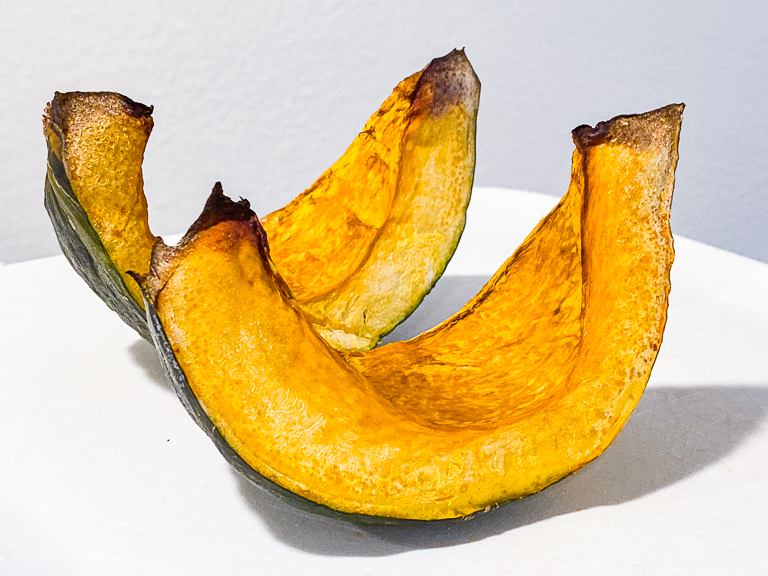 The other half is going to be cubed kabocha and apple. 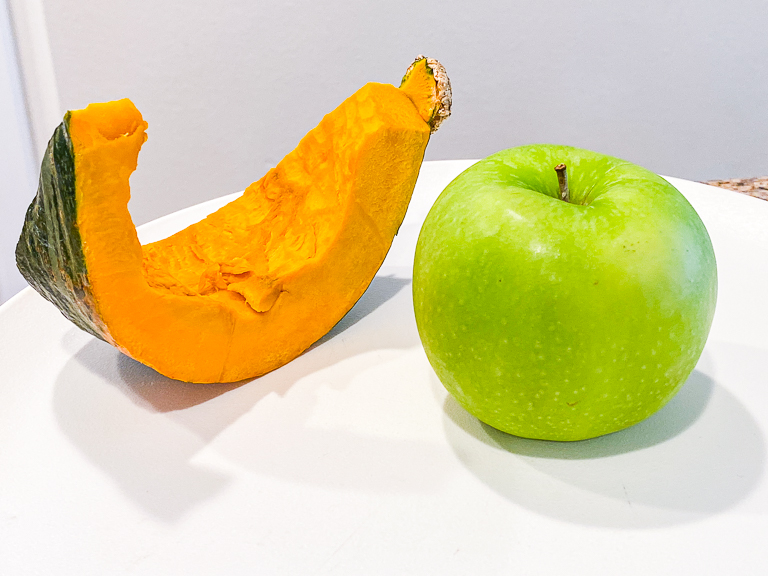 I got some butter heating in a pan and added my cubed apple and kabocha. After they were browned, I added some powdered sage instead of fresh sage. Hopefully that'll still work out. 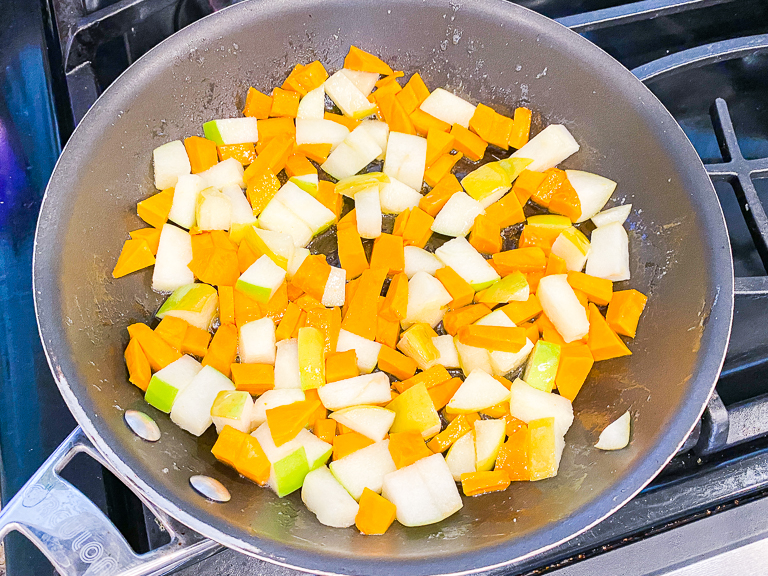 There's our toppings. A kabocha mash as well as some cubed apples and kabocha. It's smelling tasty. 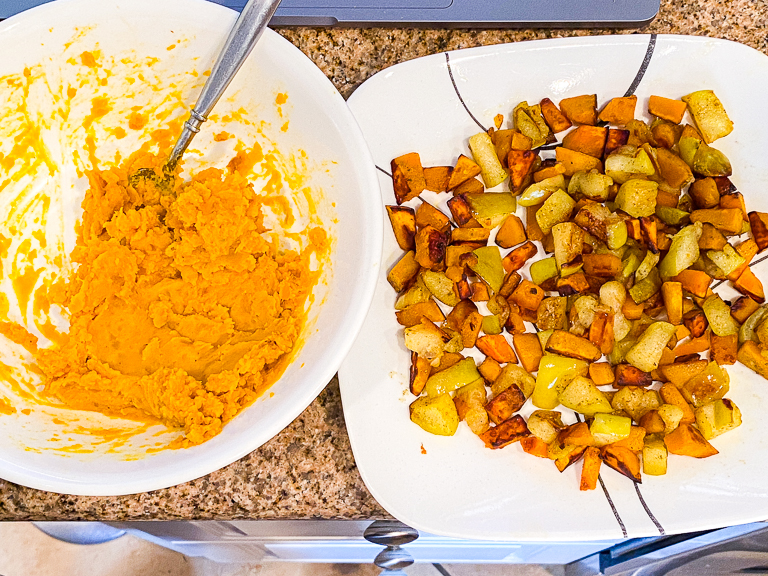 Which crust should we use? Both Theresa and Chi have loved the Artisan Crust recipe from kingarthurbaking.com that I've used a few times before. And I have to say, out of all the crusts I've made, I think it's my favorite too. You're supposed to start it 24 hours ahead of time, but I don't have that kind of time today. I've made a couple modifications to the recipe in order to get it moving a little faster. The original recipe only calls for 1/8th teaspoon of yeast. All my other pizza recipes that I make the same day use 1 1/2 teaspoons, so I added that much to it, plus 1 1/2 teaspoons of sugar instead of the recommended 1/2 teaspoon. This Artisan crust is a very wet dough. 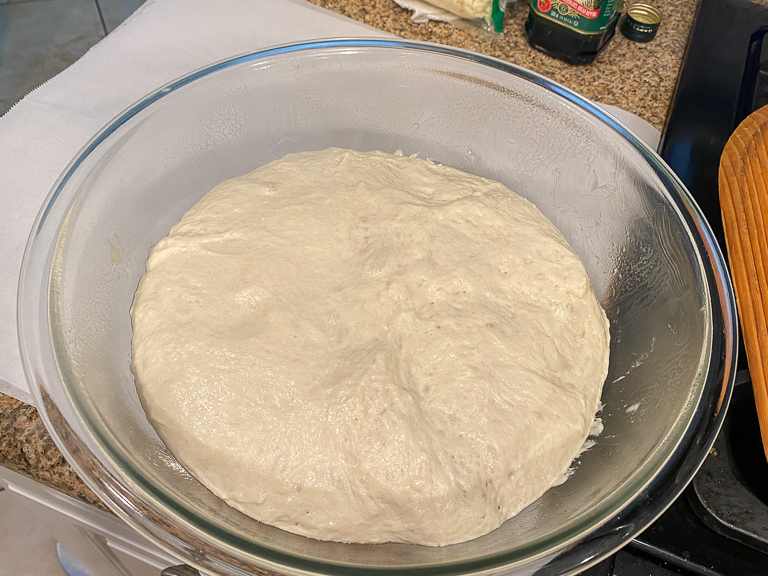 I floured a piece of parchment, floured my hands, and floured the top of the crust. It's super sticky otherwise. 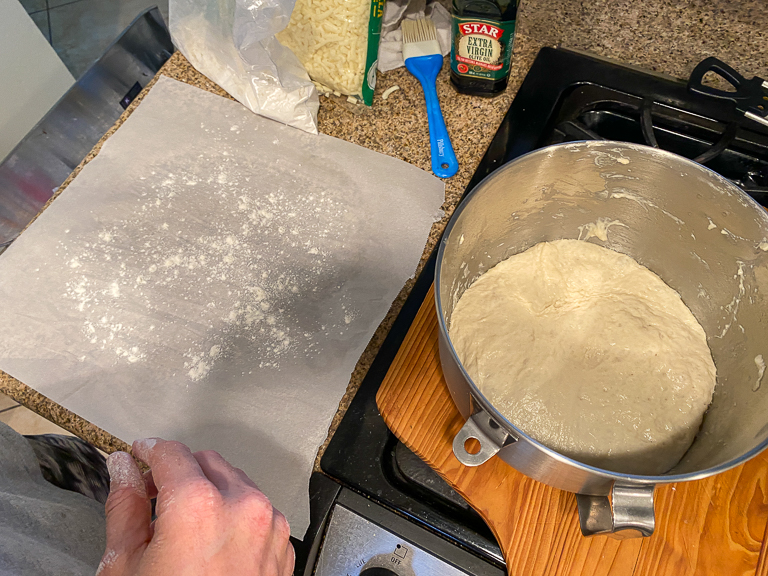 For cheeses, the recipe calls for Gruyere, Parmesan, and Mozzarella. 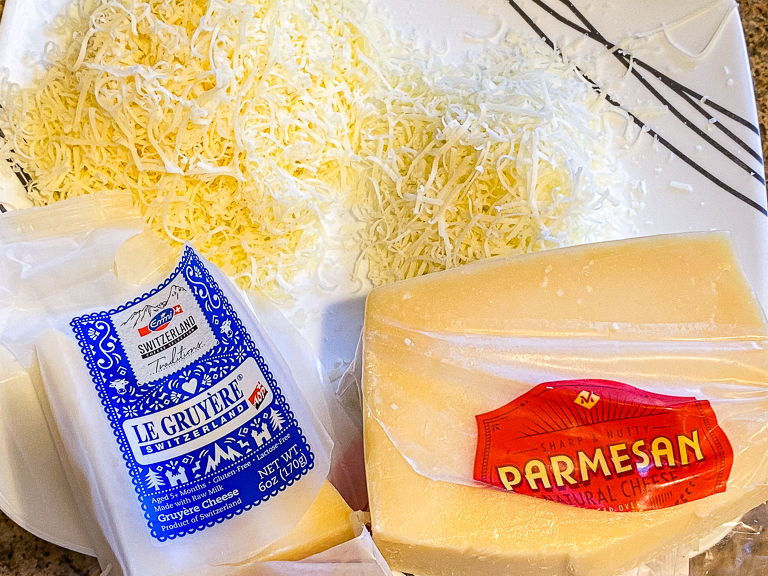 This is a no-sauce pizza, so after a quick brush with olive oil, I spread my gruyere and mozzarella. I dolloped my kabocha mash all over too. 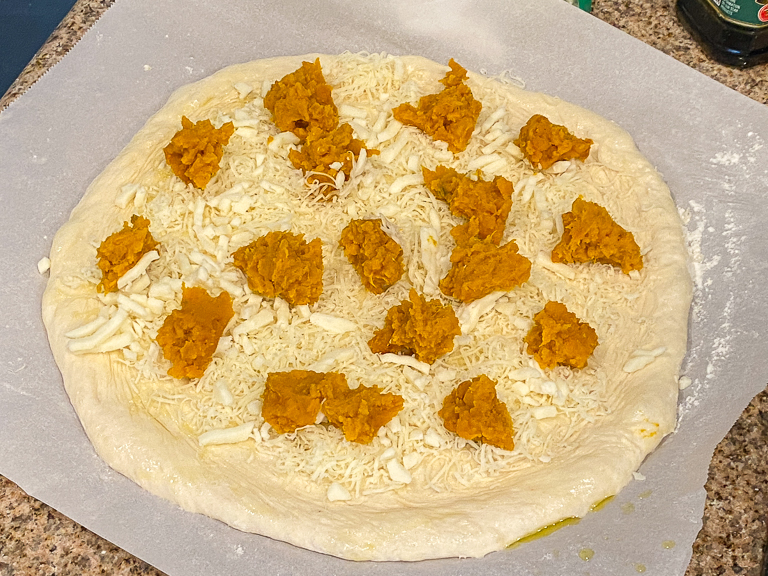 We've got some scallions growing outside, so I was able to use those instead of buying them. 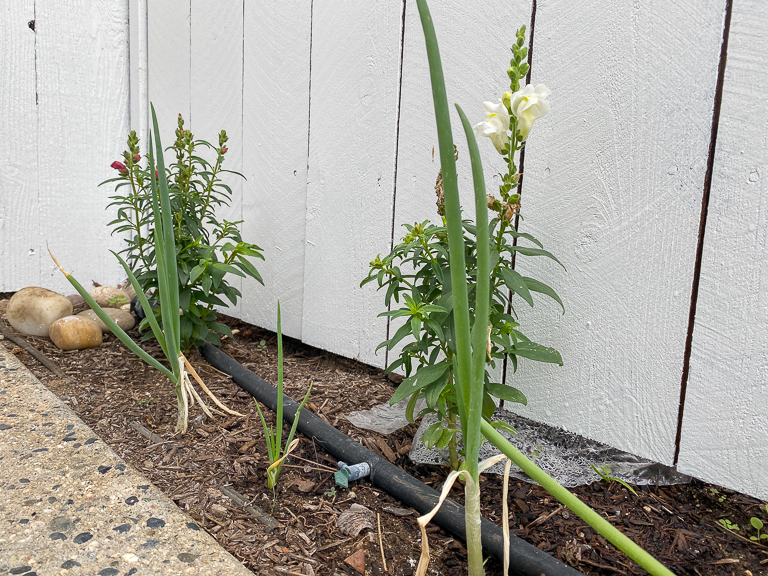 I spread my cubed mixture over it, followed with the scallions and parmesan. 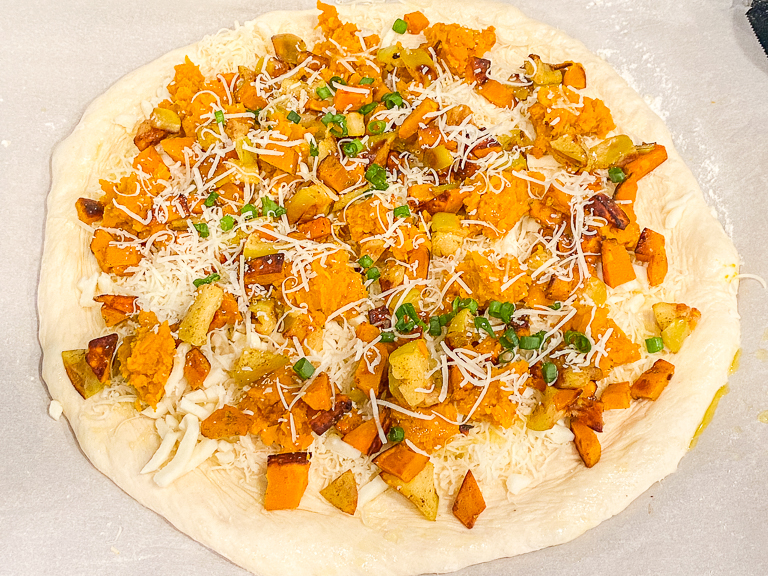 I've got a pretty good idea that the pumpkin pizza isn't going to be a hit with everyone, so I made another pizza to go along with it. Tonight we're also having a pepperoni, bacon, ham, and pineapple pizza. Everyone will like that. 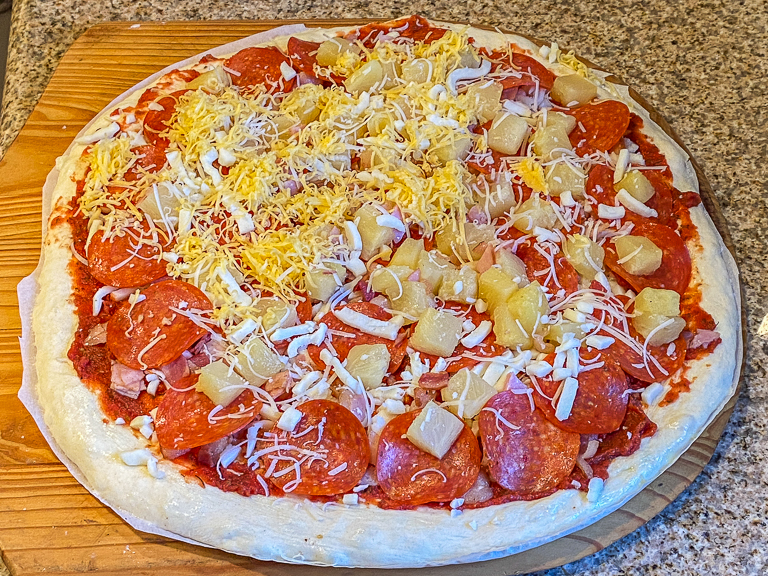 At 550F, about 12 minutes later these pizzas are done! Oh I wish I had a video of Alli's face when I told her we were going to have pumpkin pizza. Her look was a "that's weird/really?" kind of face. 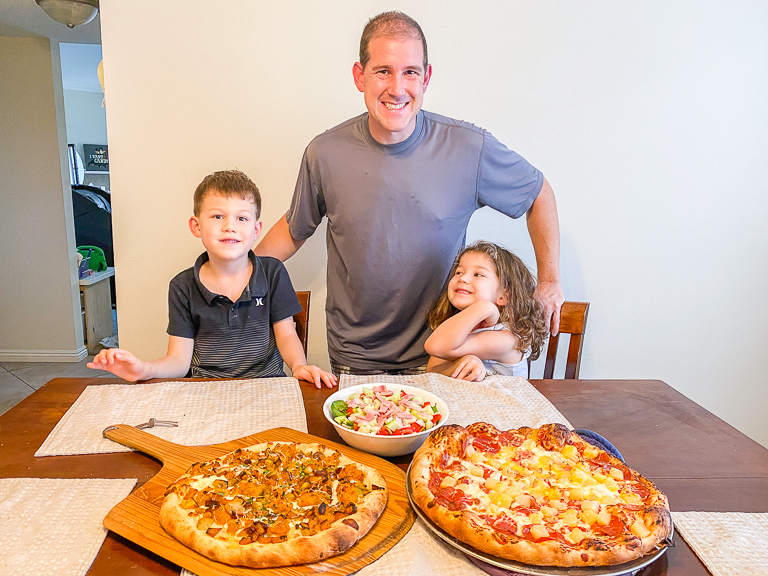 Despite her disbelief, it looks really good. And I love how this Artisan crust comes out. Fluffy and crunchy. I think one other trick is to not knead it too much. It's still very light and not chewy or tough. 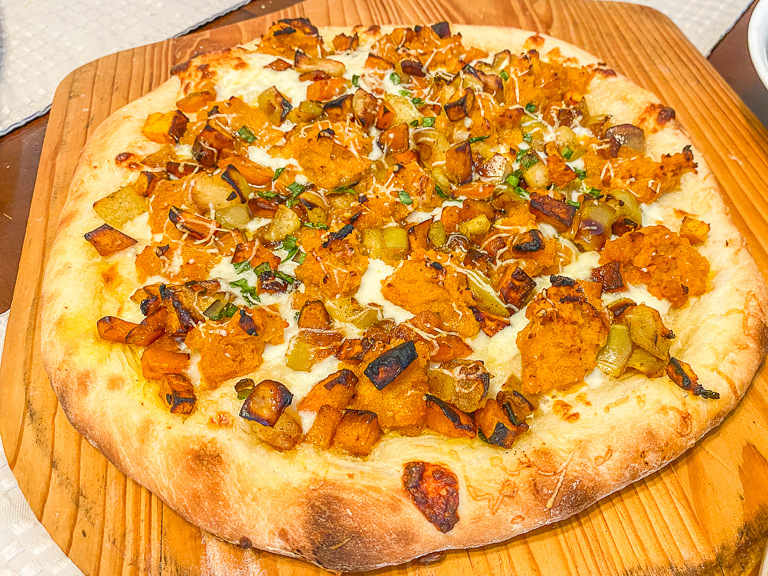 And our other pizza. I need to be more careful applying the tomato sauce. When it gets on the crust, the crust gets dark and burns in those areas. 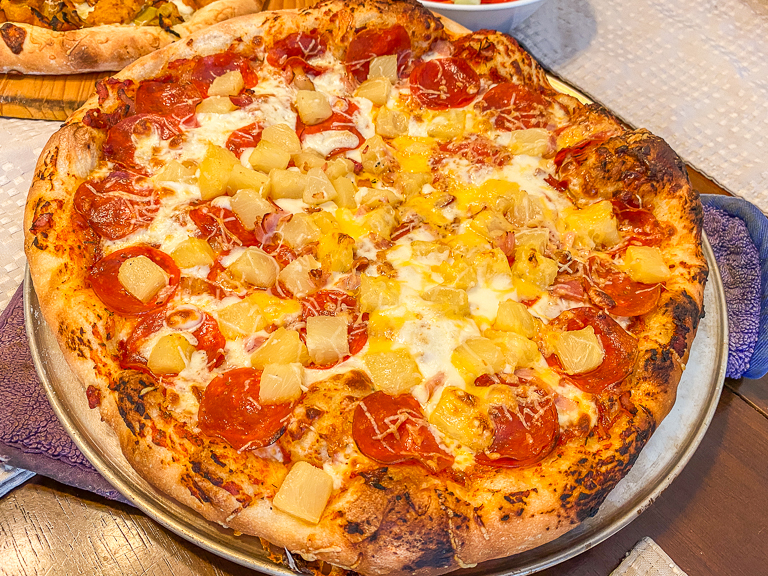 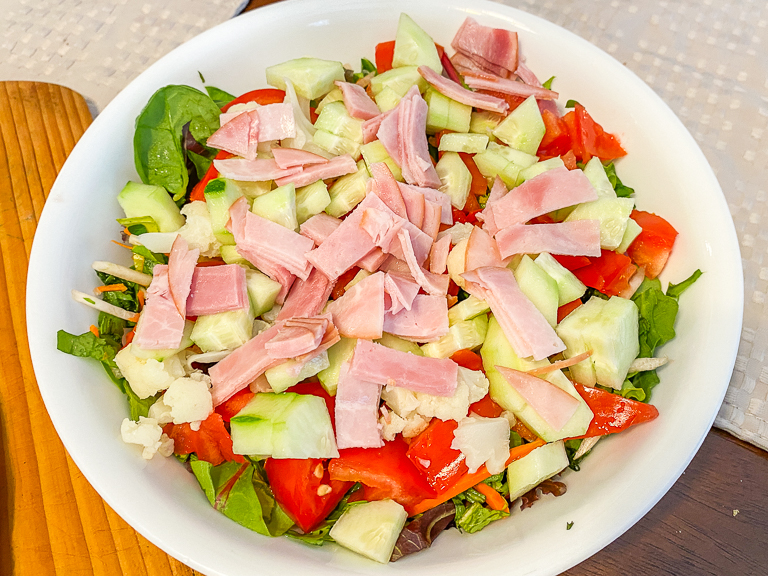 I gave both kids the smallest sliver. I don't know why she's so concerned. She likes kabocha normally. 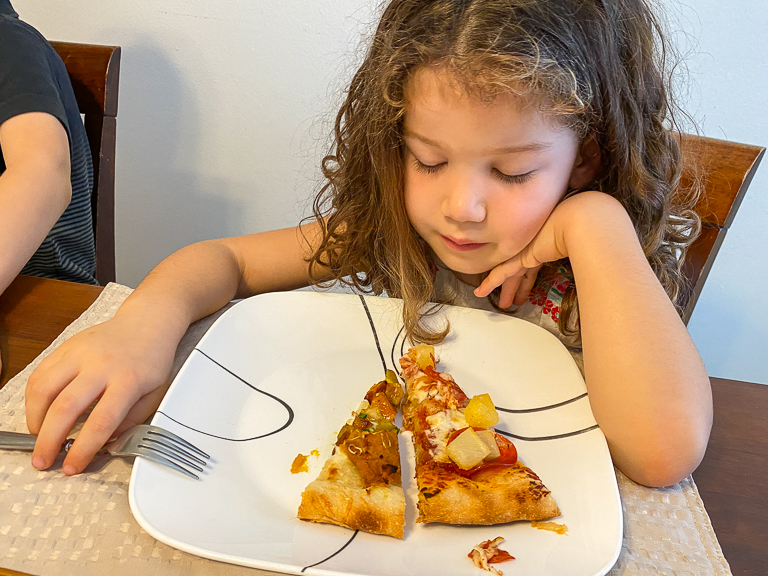 Yes, you have to try a bite Alli. 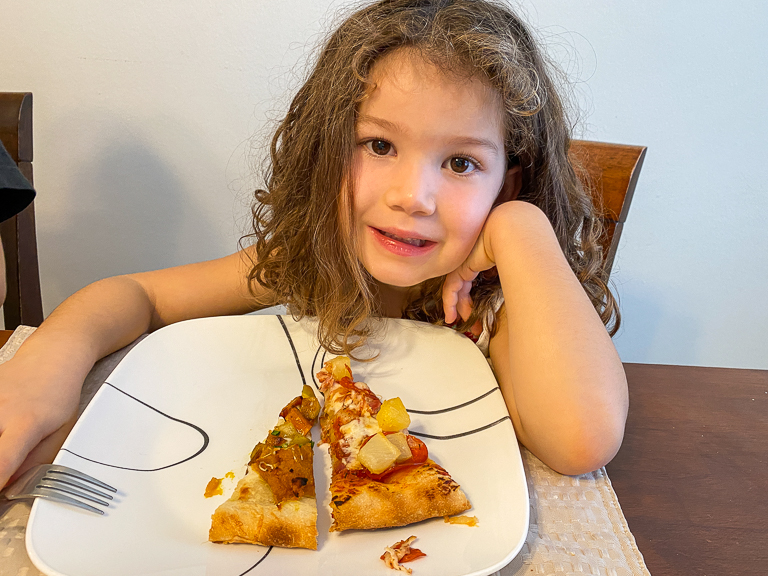 Ian declined a slice (he doesn't like kabocha), but said he'd still give it a try. 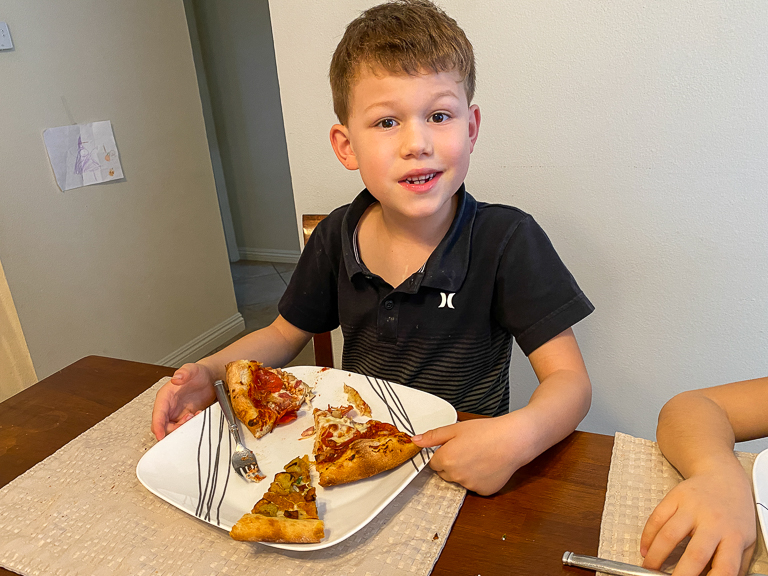 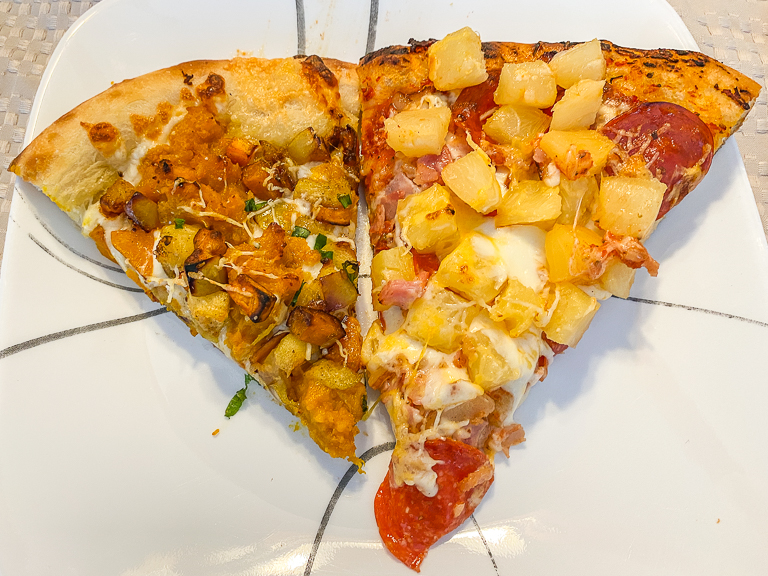 What do you think Theresa?
She loved it! It's a sauceless pizza so it has that going for it. It's a little sweet, almost like a dessert pizza, even though there's not very much sugar in it. The kabocha is a little sweet. And all the other ingredients make this a more complex flavor than your standard pizza. She liked the dollops of mash in particular. All that and it's on a delicious crust. 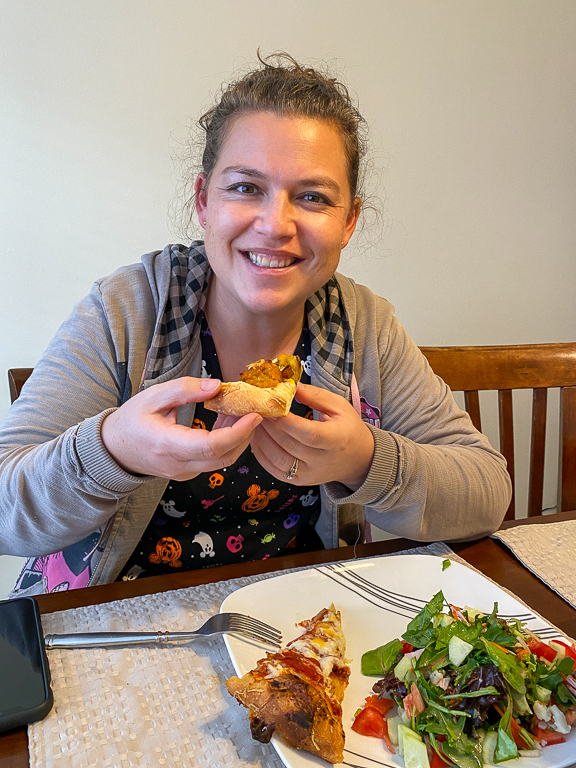 The adults are voting and giving this a thumbs up. Chi and Richard were impressed. Chi has told me a few times now "I've never heard of someone making a (insert whatever pizza I'm making this week) type of pizza before". She said this kabocha pizza is one of her favorites now.
I was actually pretty impressed with it too. It turned out even better than I thought it would. 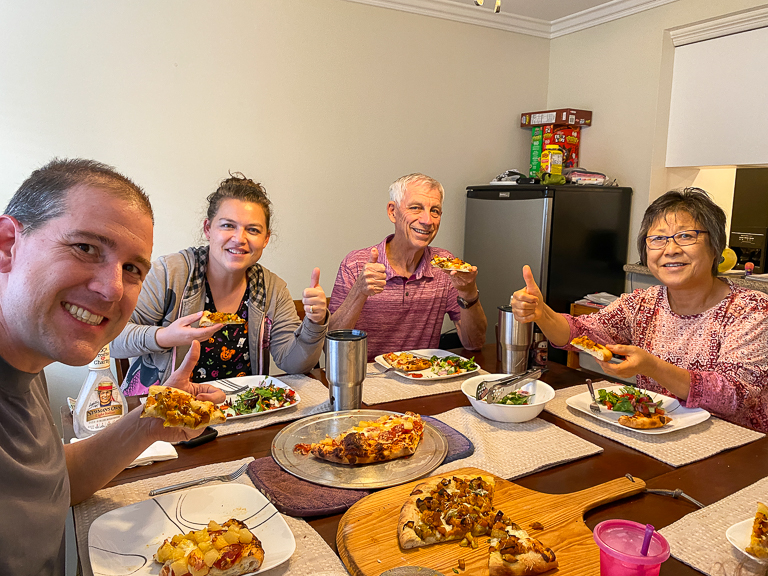 The kids though weren't fans. That surprised me for Alli at least. She likes everything. Oh well, can't please them all the time.
But overall I think the Pumpkin Pizza was a fun thing to do in the week leading up to Halloween! 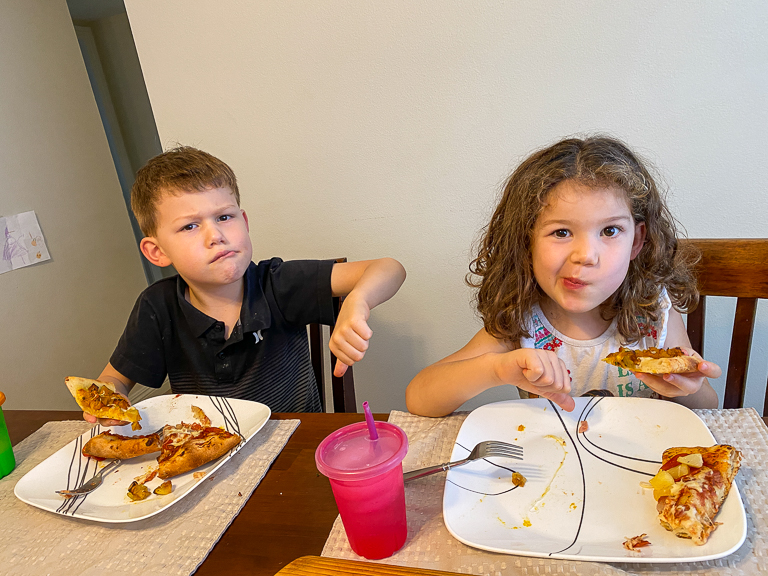