Tonight we're doing something a little different. I think this is the first time we've ever had a Tic Tac taste test. But when I saw they were releasing this new Limited Edition Coca-Cola flavor, I knew we'd have to give it a try. Soda is a special treat in our household, so the kids were especially excited. 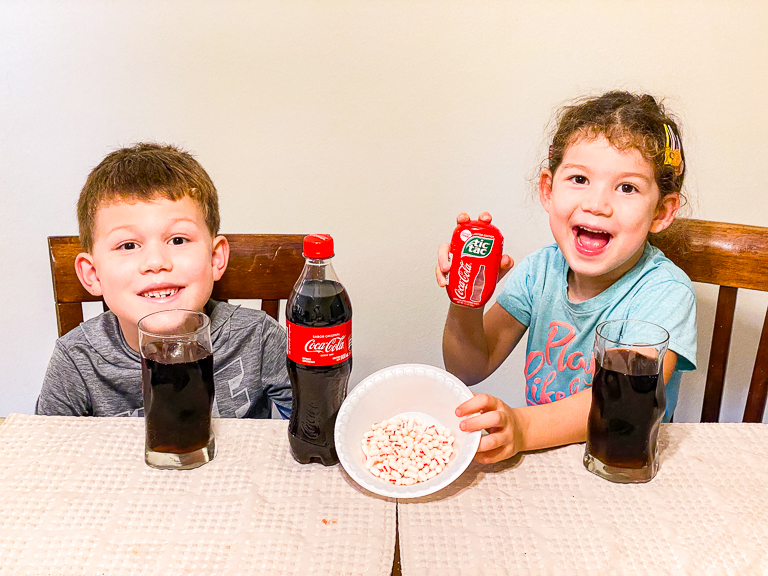 Tic Tacs are pretty much sugar, so I figured it would be best to have a Coke with real sugar instead of high fructose corn syrup. Does it taste different? Maybe? 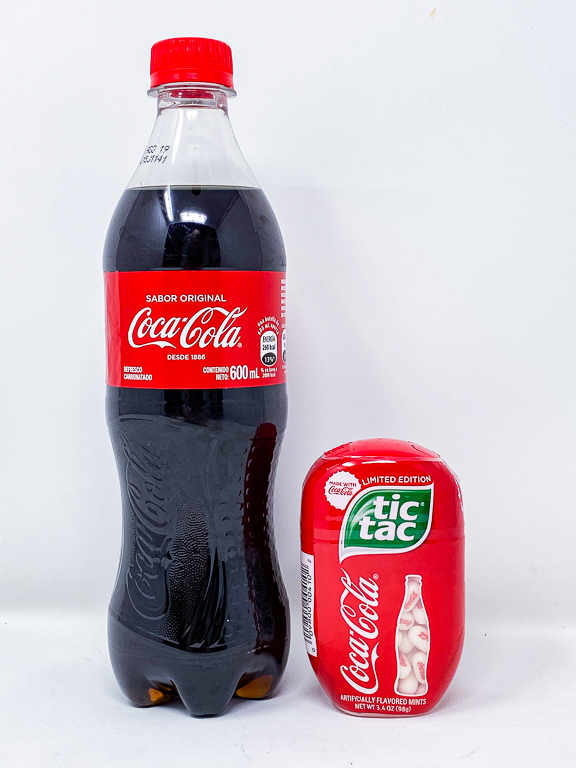 The packaging is nice and bright, with Coca-Cola colors. I like that you can see the mints through the little Coke bottle in the packaging. 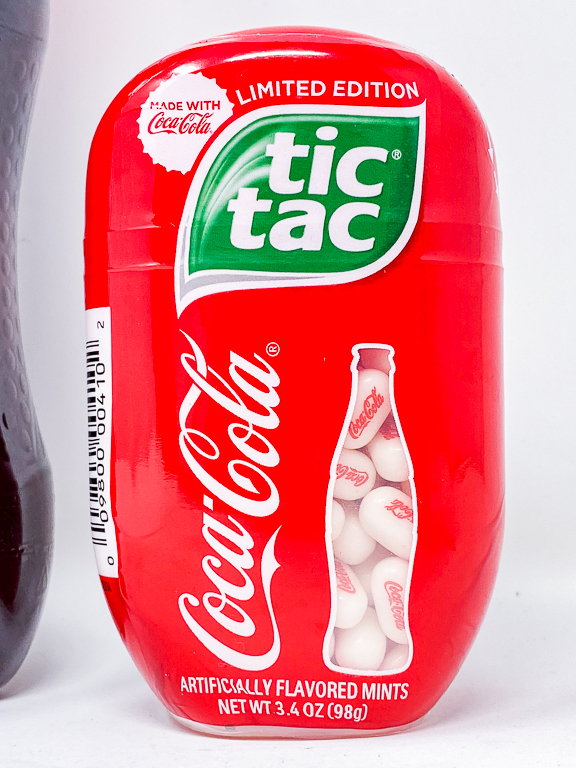 And each mint is white with a red Coco-Cola logo on it. 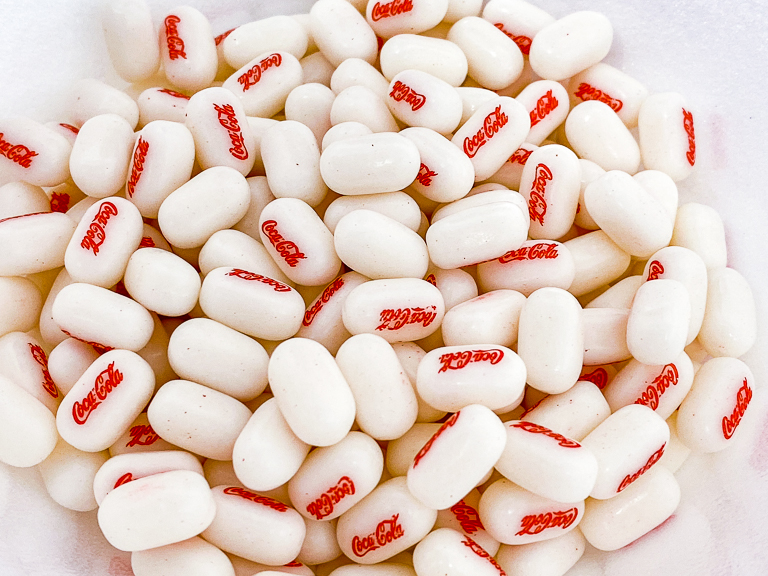 It's odd that they call them mints too. There's nothing minty about it.
It's also weird to me that these are 0 calories. Aren't these just sugar pills? In my quick research, I found that there's a little controversy over the labeling of these. Technically they're 1.5 calories each, but because food labeling is in increments of 5, you can round down and say it's 0. 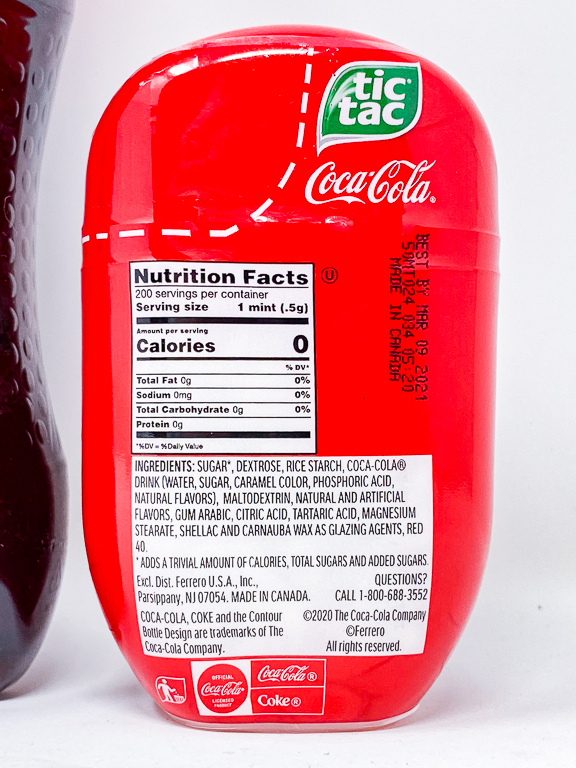 So that made this next part of my comparison a little more difficult to do. There's about 200 Tic Tacs in here, but how much sugar is that? Best I could tell in my quick looking, they're 90% sugar and 10% other things like flavoring and glazing.
The package is 3.4 oz, and 90% is 3.06 oz of sugar. That converts to 87 grams of sugar.
How much liquid Coca-Cola is that equivalent to? At 39 grams of sugar per 12 ounces, it's about 27 ounces. So you could either eat all 200 mints in the picture below, or drink the Coke in the glasses behind them. 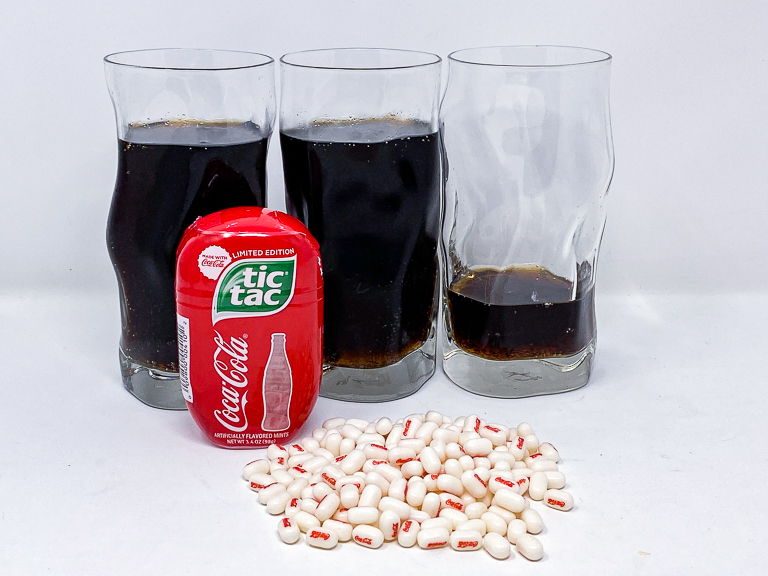 Now it's time to eat them! Not all of them. Just a few of them. 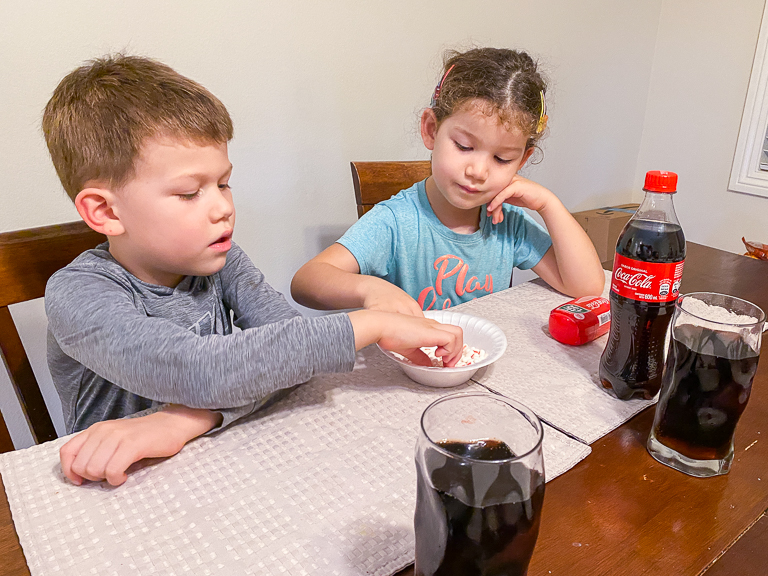 What kind of taster are you? When I have a new candy, I suck on it so I can taste the flavor fully. 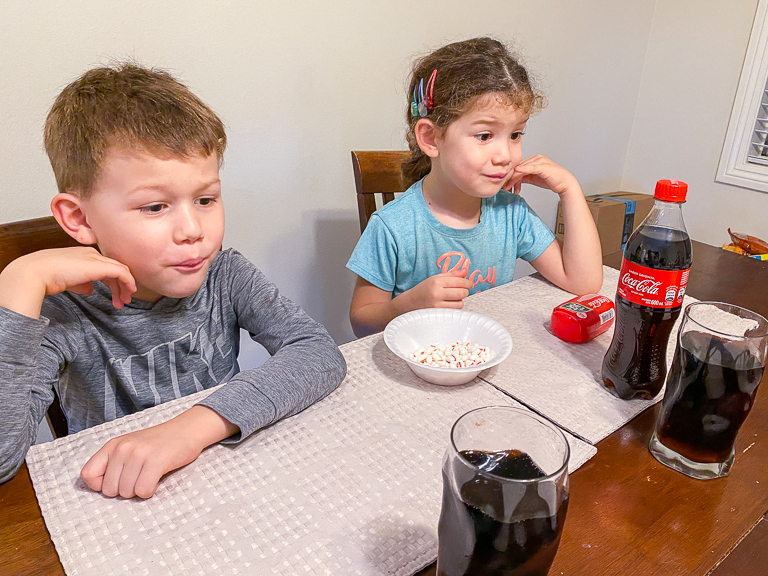 The kids are obviously from a different school. They were crunching away and already digging in for more while I still had a lot to go on my first mint. 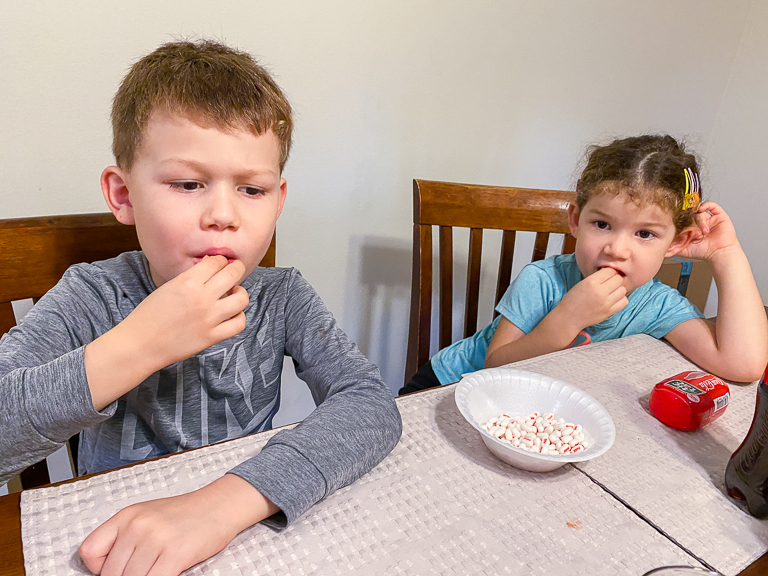 Do they taste like Coca-Cola? Actually, they really do. I'm not going to quibble over the subtleties of Coke flavor versus generic cola. Actually they've got a pretty strong cola taste, almost getting to the more concentrated syrup levels. And if you crunch them, it's a much stronger flavor too. 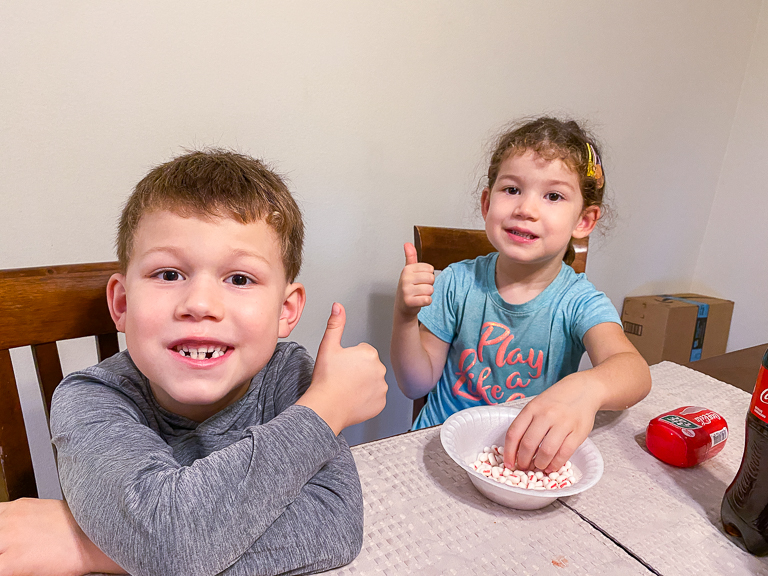 Which is maybe a little too strong for everyone. Theresa wasn't a fan. 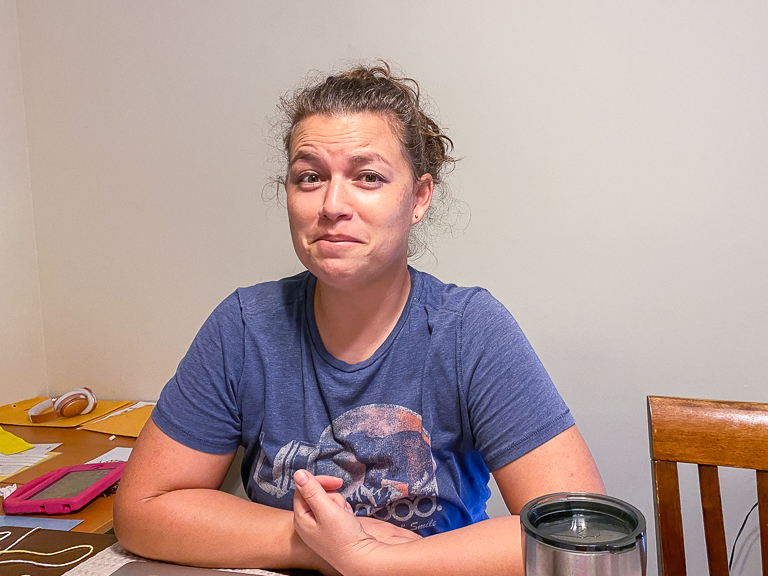 It's time for the soda now! 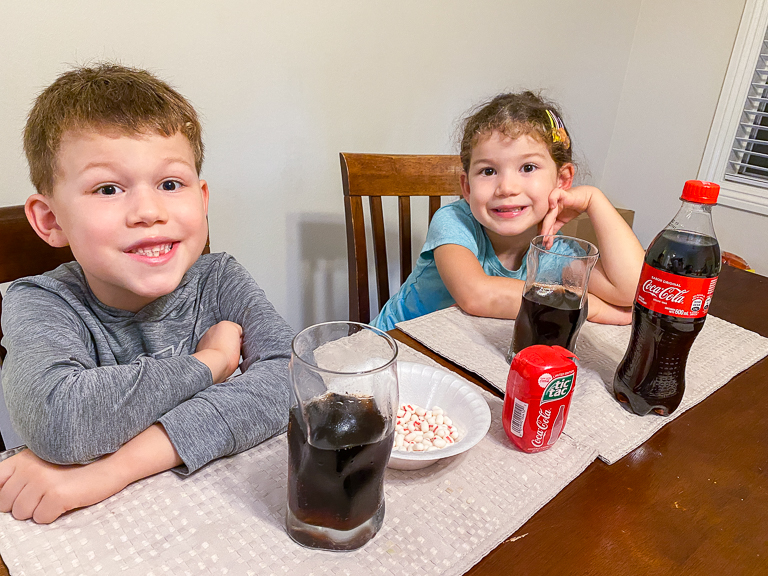 Both kids are fans of it. No surprise there. Both the Tic Tacs and the soda are good. 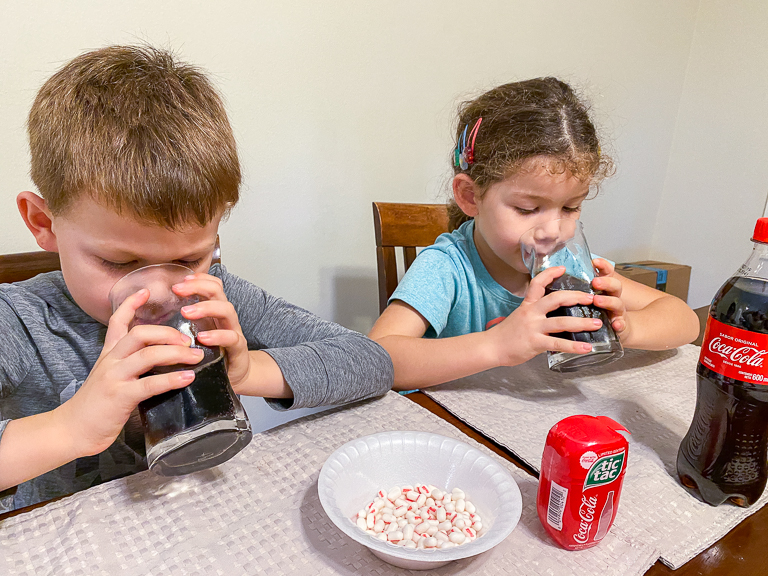 Ian remembers our science experiments with Mentos and diet Coke exploding, so he wanted to try it out with these Tic Tacs as well. Nothing explosive happened this time. Just a little light fizzing.
It was something fun to try! 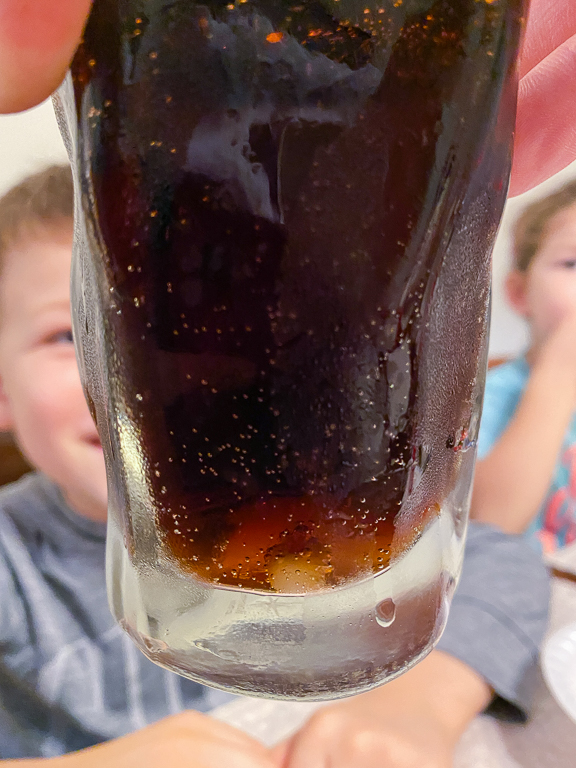