For this week of Halloween Treats, we've got to have a Halloween Cereal to go with it! Last year we had the three Monster cereals from General Mills. Frankenberry, Count Chocula, and Boo Berry.

This year, I was happy to see Kelloggs had some other Halloween options available to us. They've given us Froot Loops, Chocolate Frosted Flakes, and Apple Jacks all with Spoooky Marshmallows. 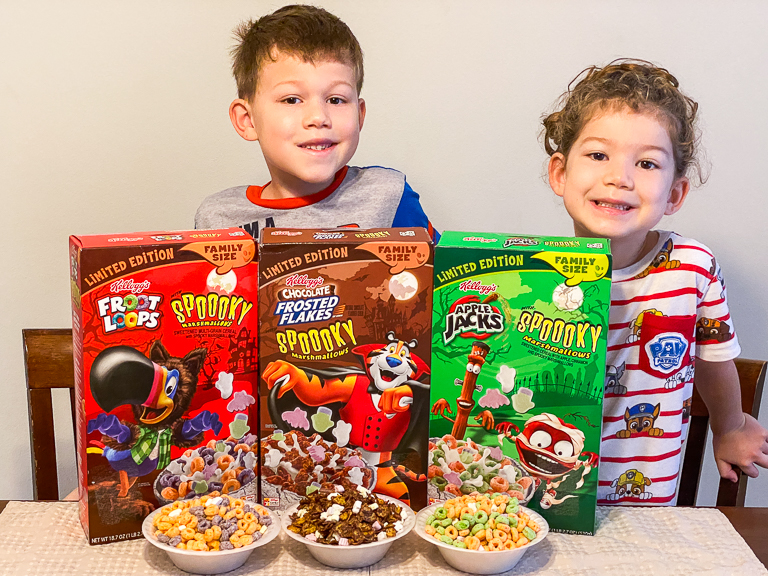 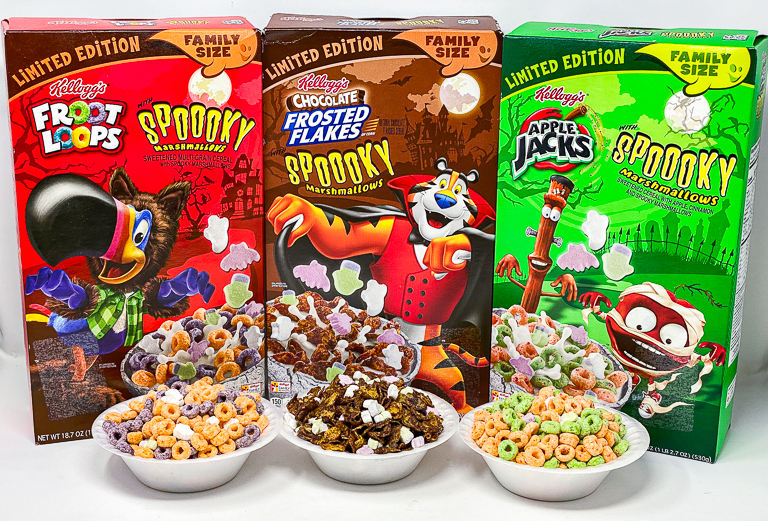 Thanks to a low battery in a smoke detector around 6:45am, everyone was up early. Let's have breakfast! 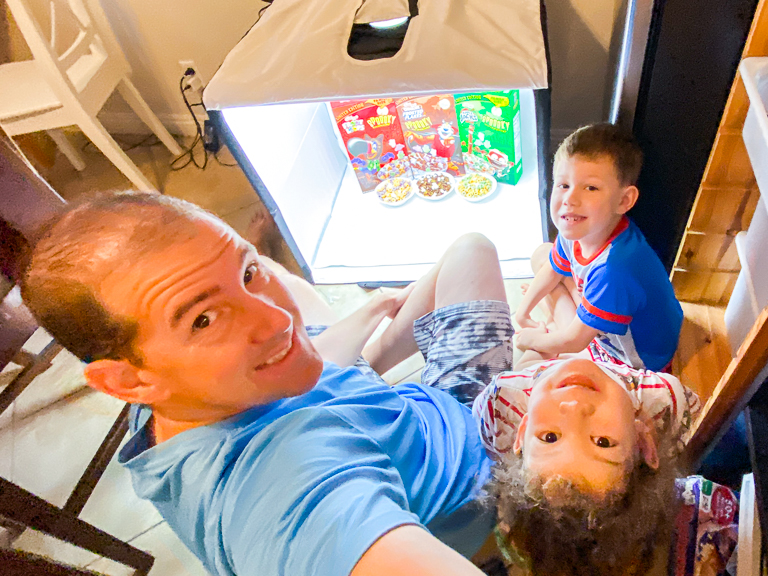 The back of each of the boxes are identical.
We've been asked to solve "The Mystery of the Vanishing Cereal!" There's 3 rooms, 3 suspects, and 3 types of cereal. Our job is to figure out which suspect ate which cereal in which room. 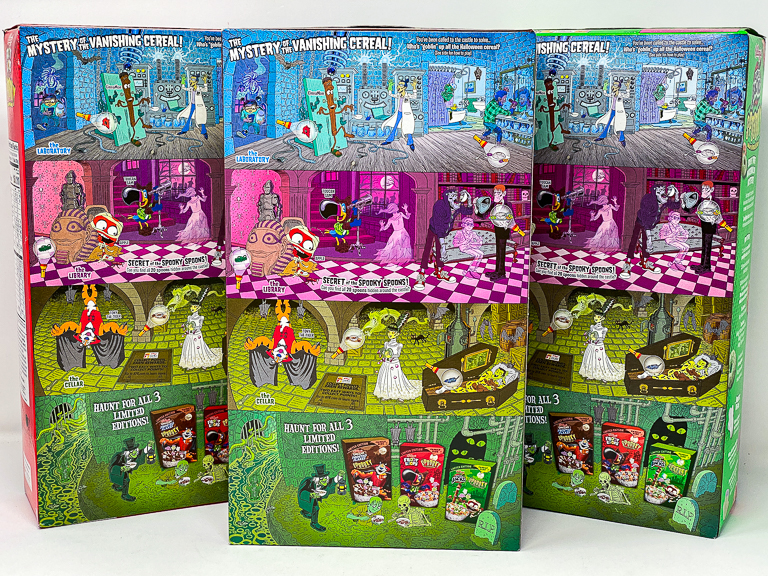 Trying to figure out the mystery. 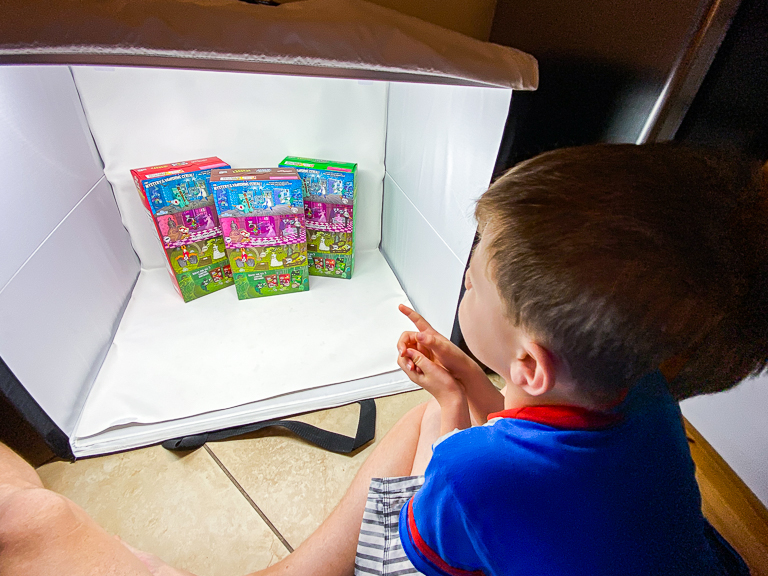 On the sides of the boxes, they're all identical. Even the Haunted Ha-Has Jokes on the bottom are the same. 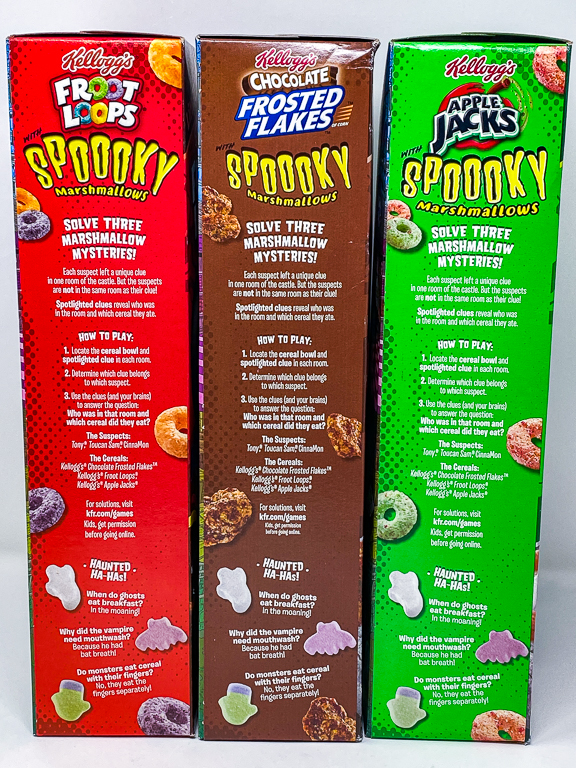 I had the kids get in their usual places for the standard picture I use to kick off the post. Afterwards, both of them were pretty interested in figuring out the mystery of the vanishing cereal. 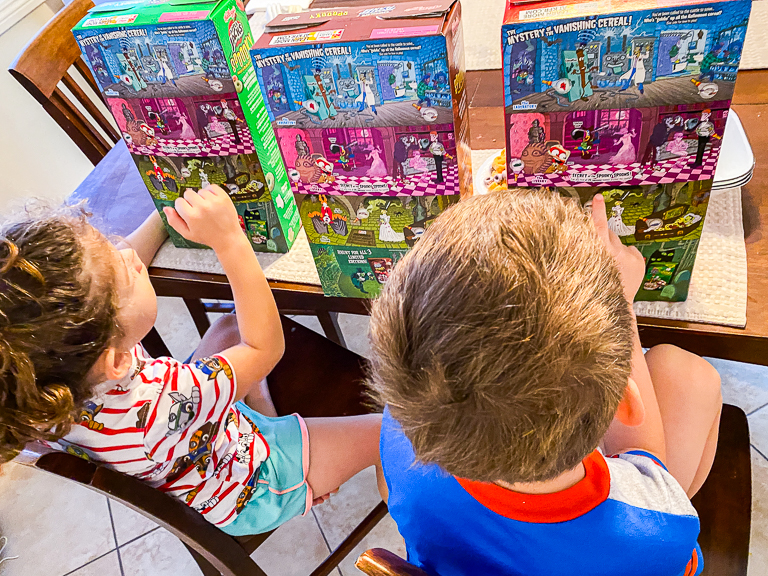 By their close observations, they were able to figure out that:
Tony the Tiger ate the Froot Loops in the Laboratory.
CinnaMon ate the Apple Jacks in the Library.
Toucan Sam at the Chocolate Frosted Flakes in the Cellar. 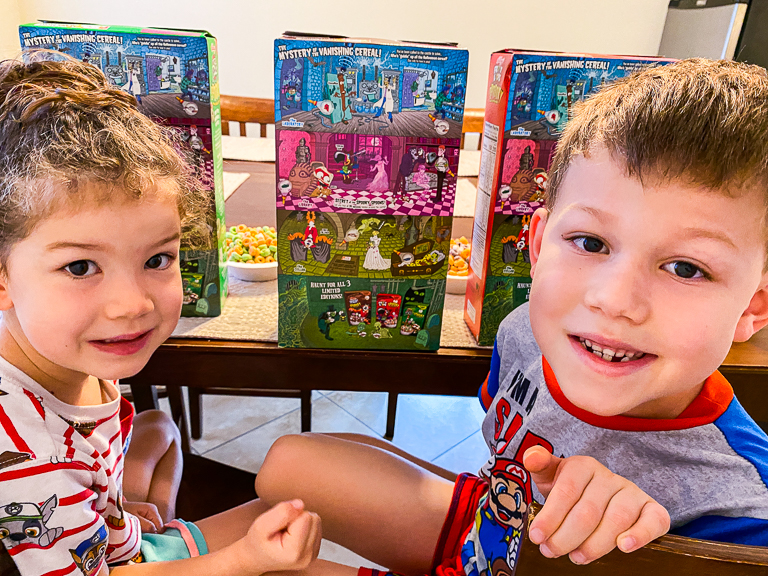 Alright, let's eat them! What should we start with? Ian suggested Apple Jacks. Alli had other thoughts, but she was okay giving Ian the choice today. 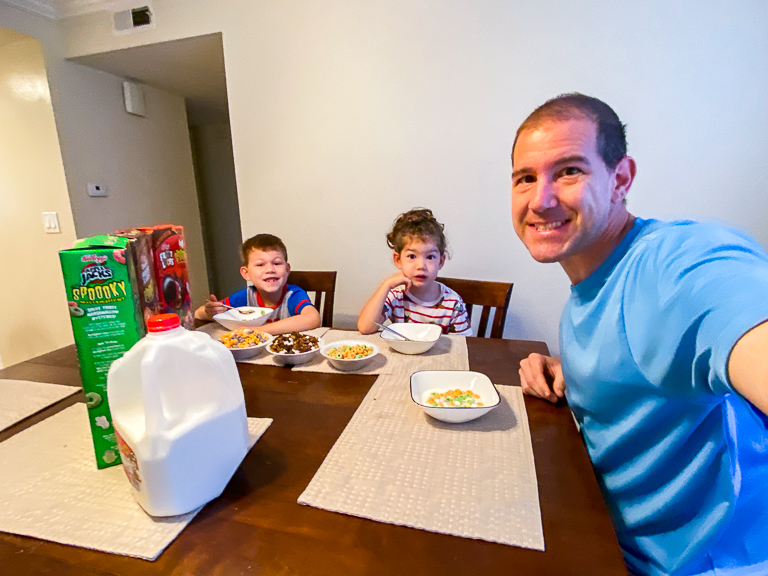 I haven't had Apple Jacks in the longest time. I don't really remember what they taste like. And the characters are new to me too. Their names were on the back of the box. There's CinnaMon the Jamaican cinnamon stick, an apple named Bad Apple. 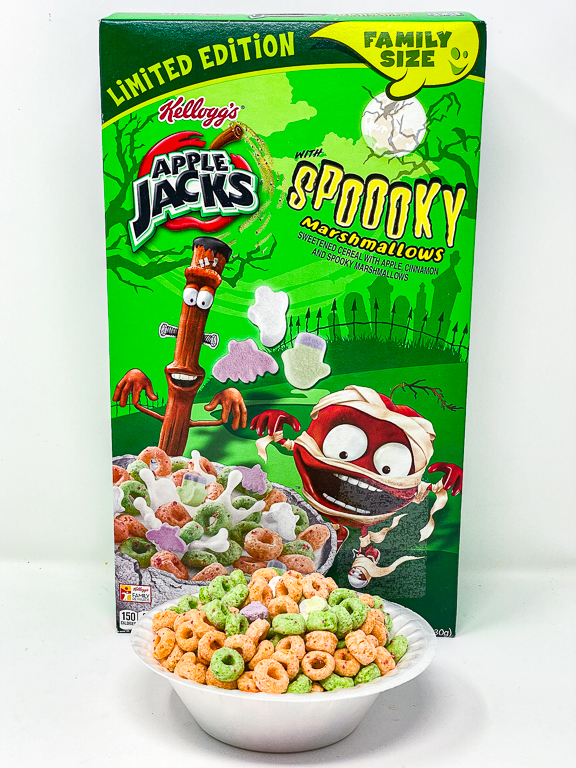 All of these Apple Jacks are speckled with red. There weren't very many marshmallows compared to all the cereal. 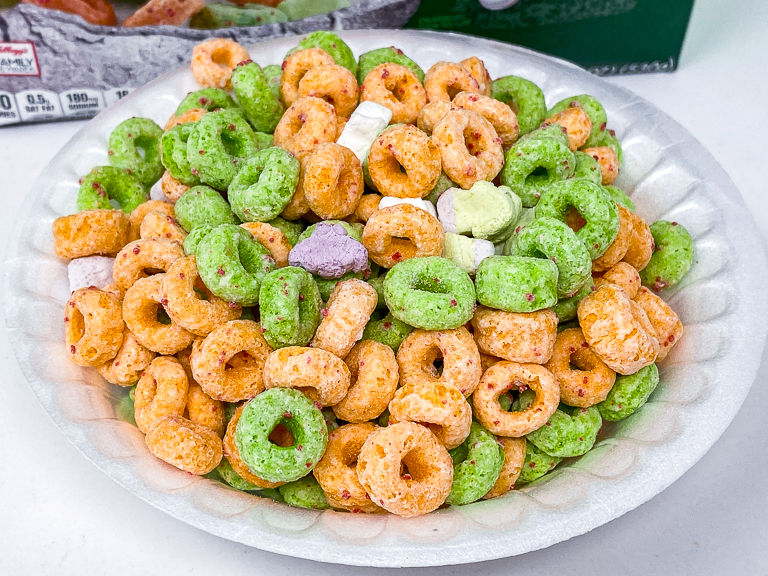 How's the flavor?
They forgot to put apple flavor in here. Alli said it tastes like sugar. Yep, that's what I'm getting too. Not even cinnamon flavor. No wonder I haven't had this cereal very often. 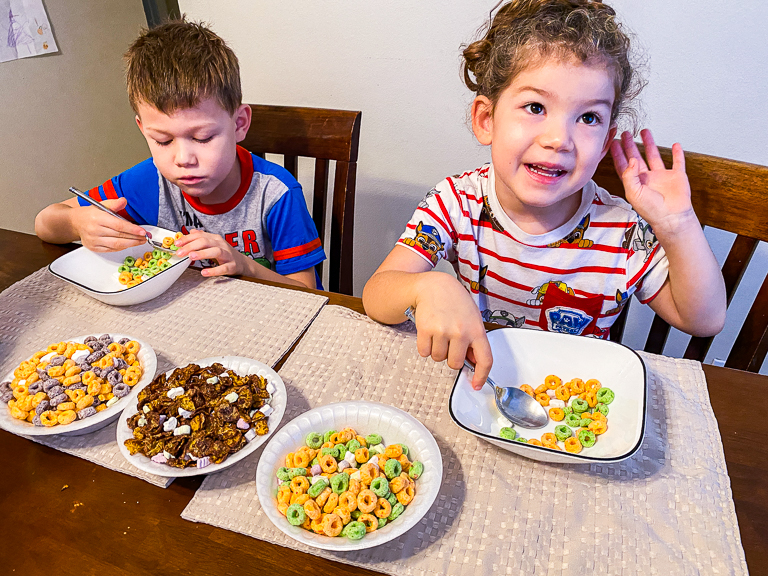 What are we doing next Ian?
Froot Loops! 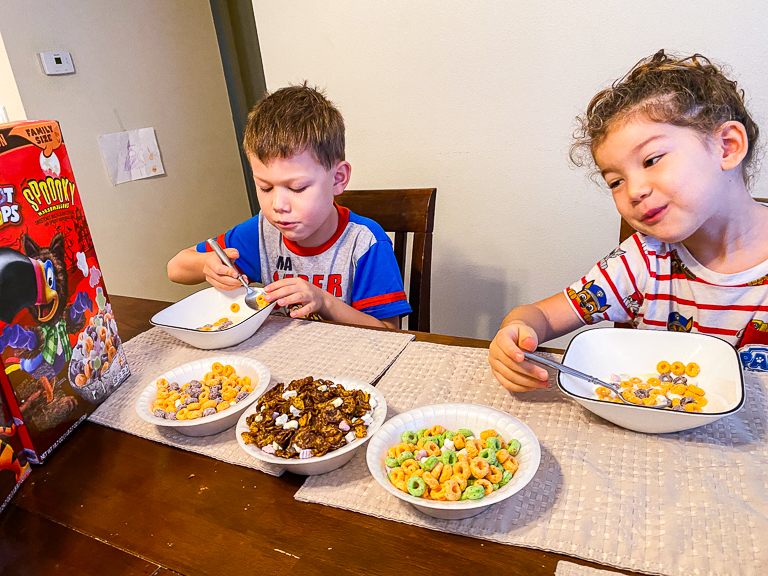 I see the Froot Loops are missing a few colors. Normally all 6 colors of the rainbow are represented, but in the Halloween version, only the orange and purple loops appear. 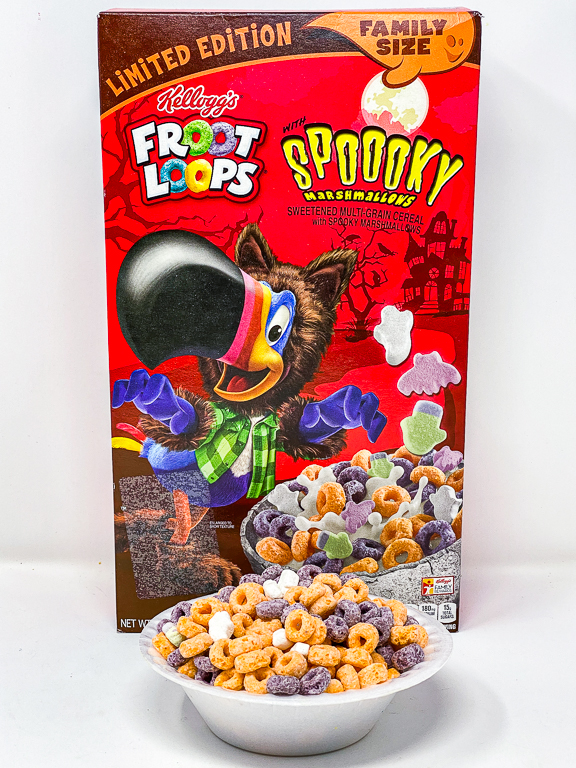 Again, not too many marshmallows to speak of. 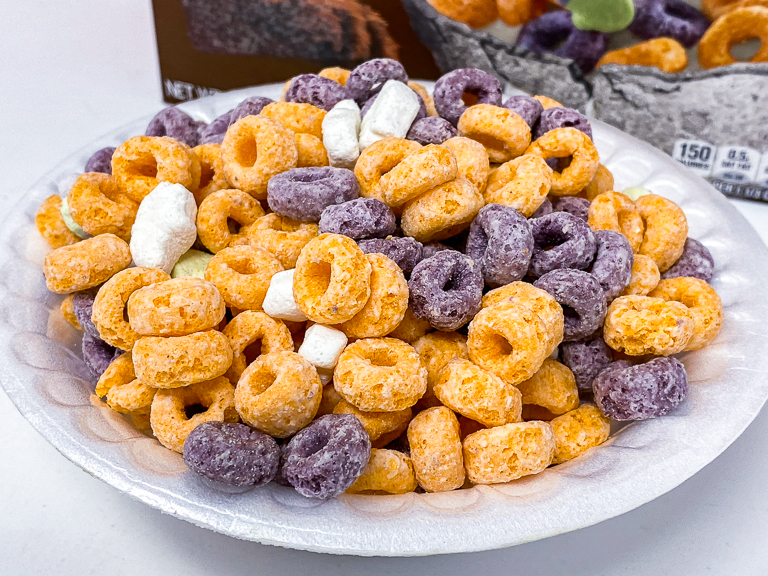 But while we're on the topic of marshmallows, I see there's 3 different marshmallow shapes, including a two-toned Frankenstein monster head, ghost, and bat. So that's what they look like on the box, but what do they really look like. 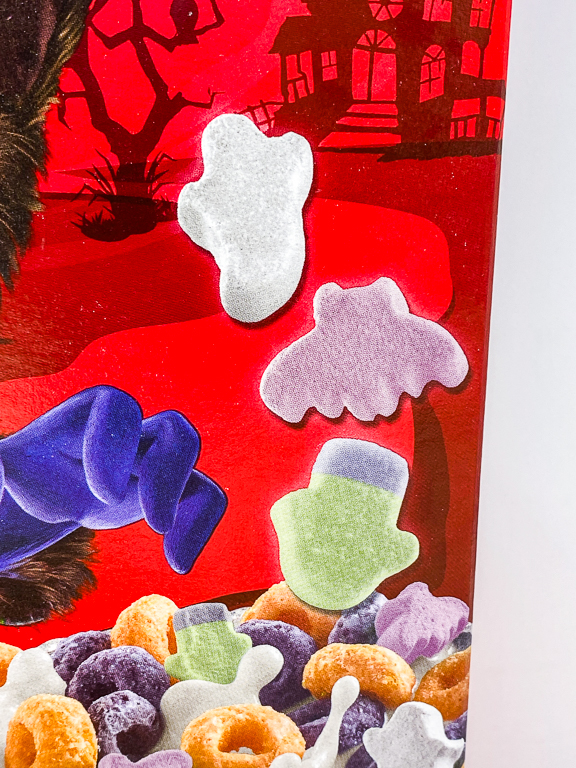 Not too bad at all. 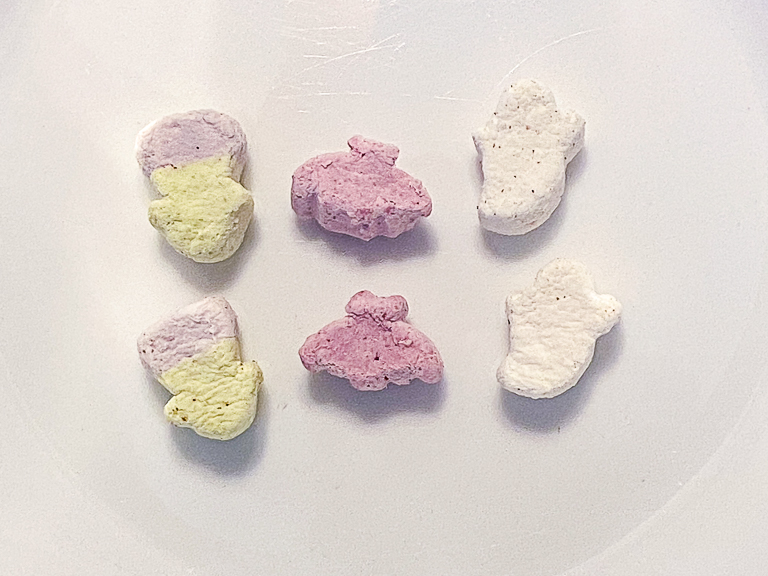 Alright Ian, I know you're excited for this one. You've obviously been saving the best for last.
Ian's most favorite cereal he's ever had was the Chocolate Frosted Flakes with Marshmallows. I've only seen them at the grocery store a couple times ever though, so he's been out of luck. Back in August, I'd seen that Kelloggs was going to be releasing this line of cereal for Halloween and it included Chocolate Frosted Flakes with Marshmallows. I told him and he's been super excited to try it. 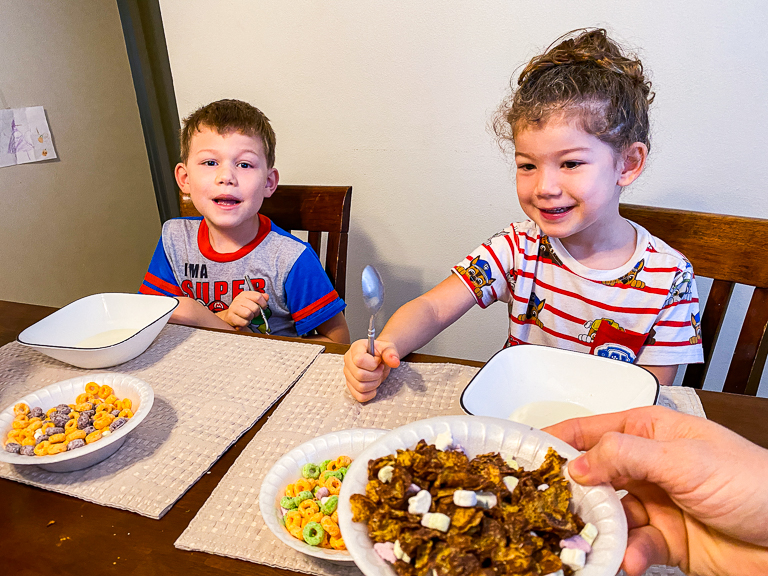 We're excited it's back! Even if it's only temporarily. 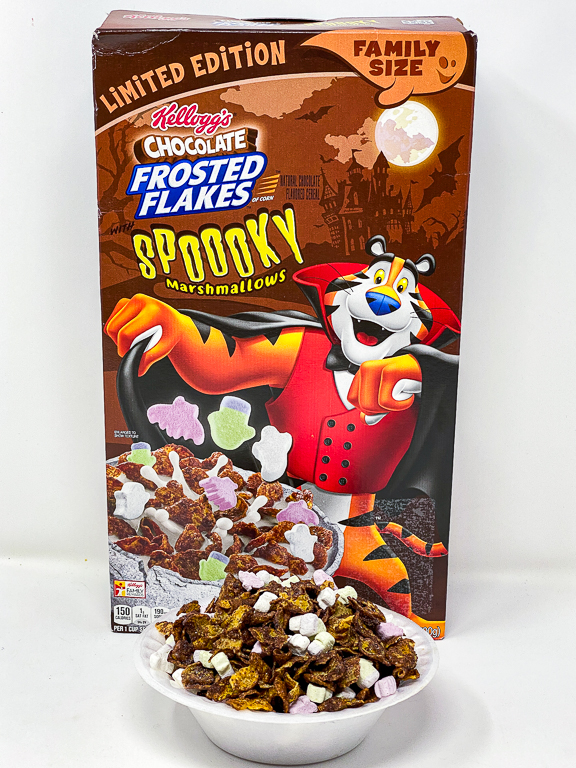 We figured out where all the marshmallows from the other cereals went. These Chocolate Frosted Flakes had a ton of Spoooky Marshmallows! 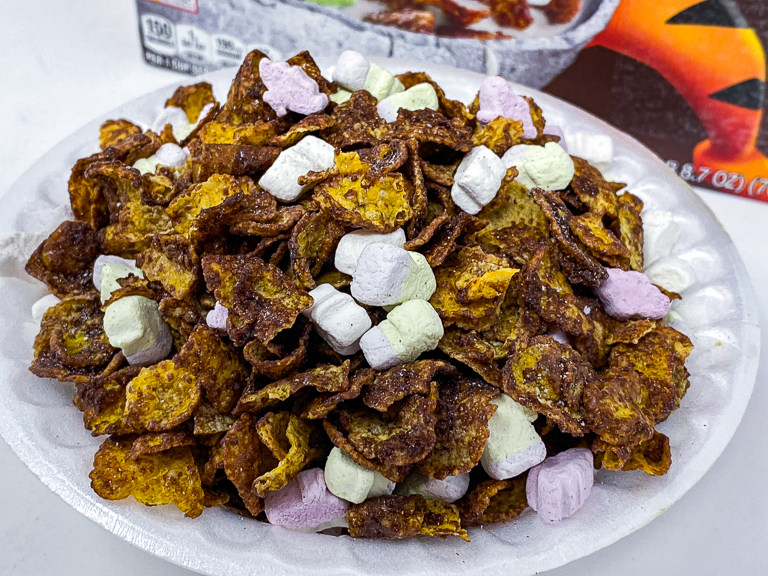 He asked for a lot. I gave him a lot. He dug into it, taking oversized bites. And after his first bowl, he asked for another. Sure, why not. You don't get this often. 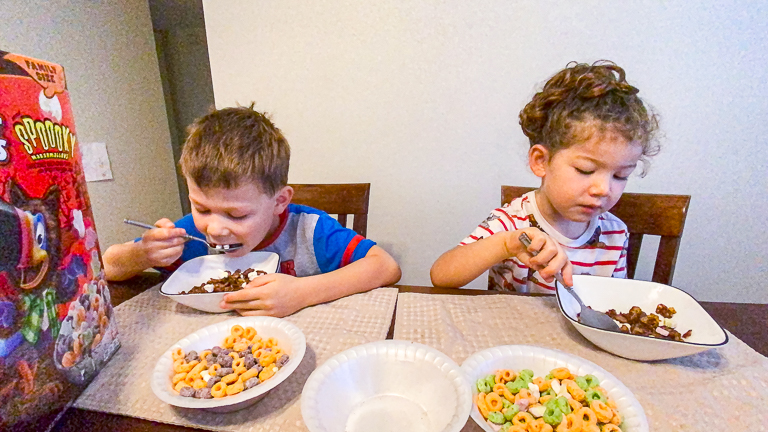 Grammy stopped by to see the cereal taste test. 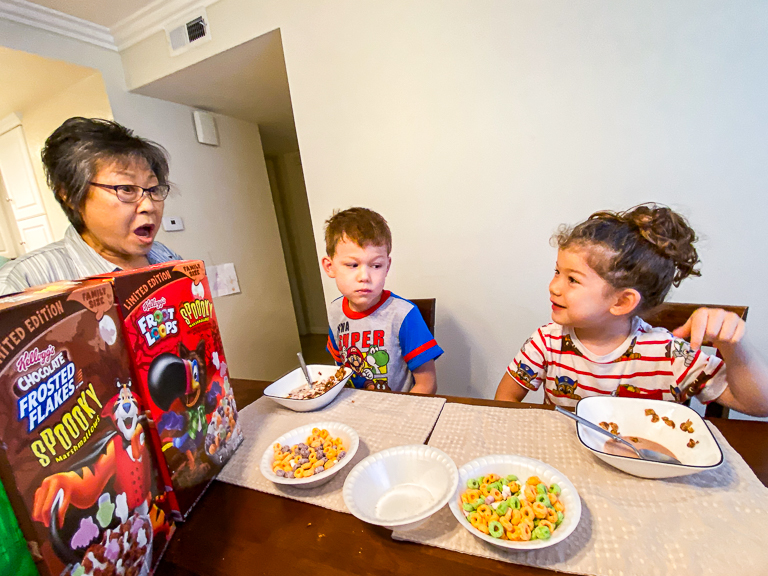 The Chocolate Frosted Flakes turns the milk into chocolate milk! 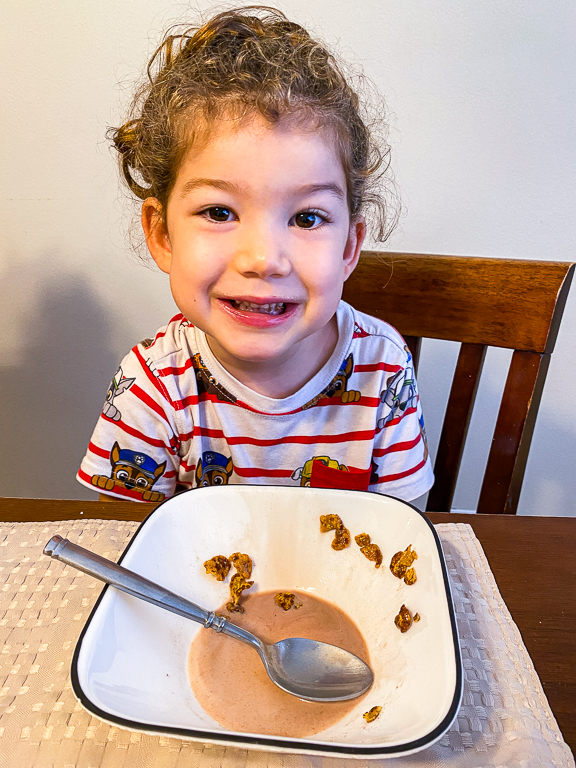 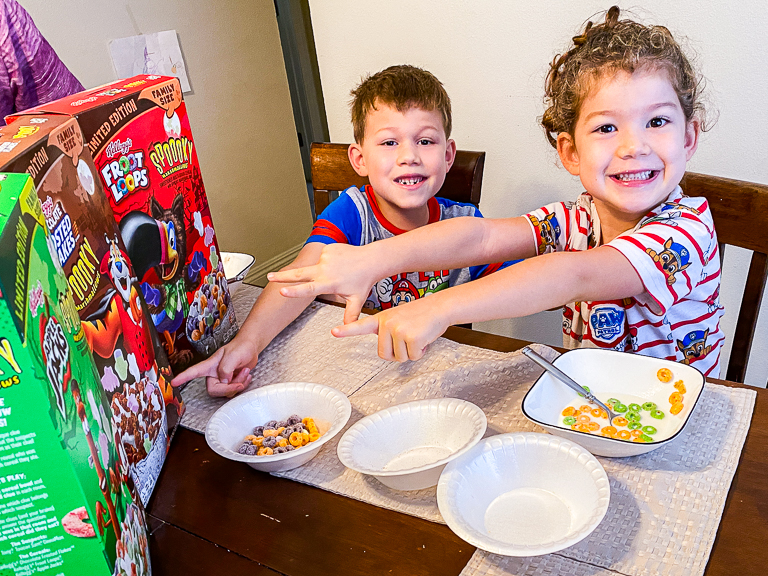