First a recap of past years. They've been doing this since 2013 and I've been along for the ride ever since.

Theresa has seen these up in my snack cabinet and has been wanting to crack them open. Let's get to tasting! 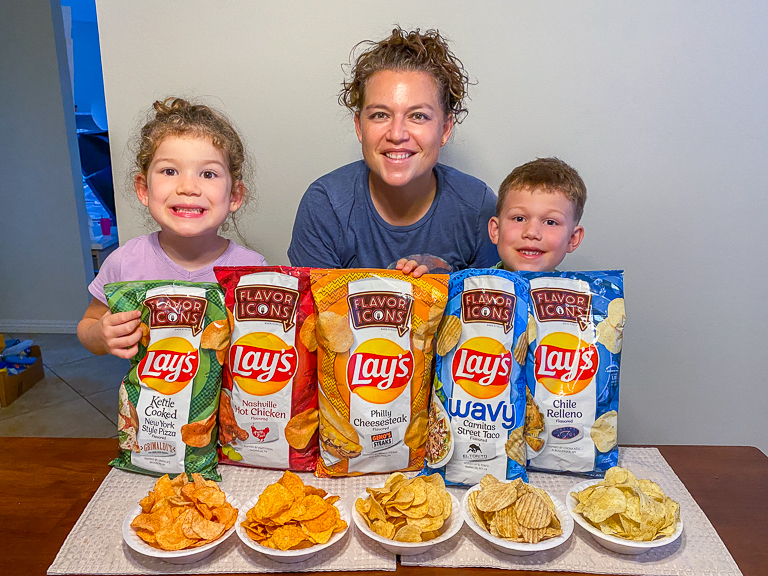 Here's our five chip flavors. I know we've tried varieties of some of these flavors before. For the Kettle Cooked New York Style Pizza, I remember Lay's made a Deep Dish Pizza style pizza inspired by Giordano's. And I've tried the Nashville Hot Chicken before when my brother picked up a bag of Kroger Brand Nashville Hot Chicken Chips.

Lay's Flavor Icons were released back at the end of July. According to the press release "In these uncertain times, America can always count on Lay's to up the ante on flavor – now introducing Lay's Flavor Icons, perfectly recreating the taste of iconic restaurant dishes in potato chip form. To "return the flavor" and acknowledge the economic impact of COVID-19, Lay's has enacted a $25,000 Gratitude Fund for each restaurant as a thank you for their inspiration in the kitchen and ongoing support of their local communities. 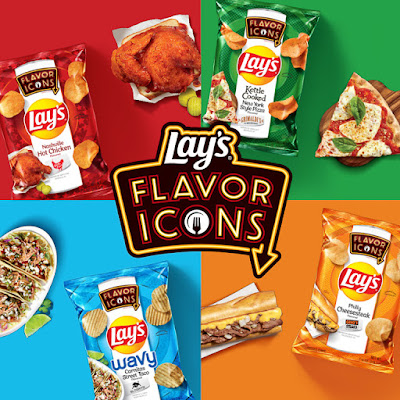 Enough talk, let's taste! Every single one of these chips promises No Artificial Flavors, so we'll see how they go about getting those flavors into the chips this year. 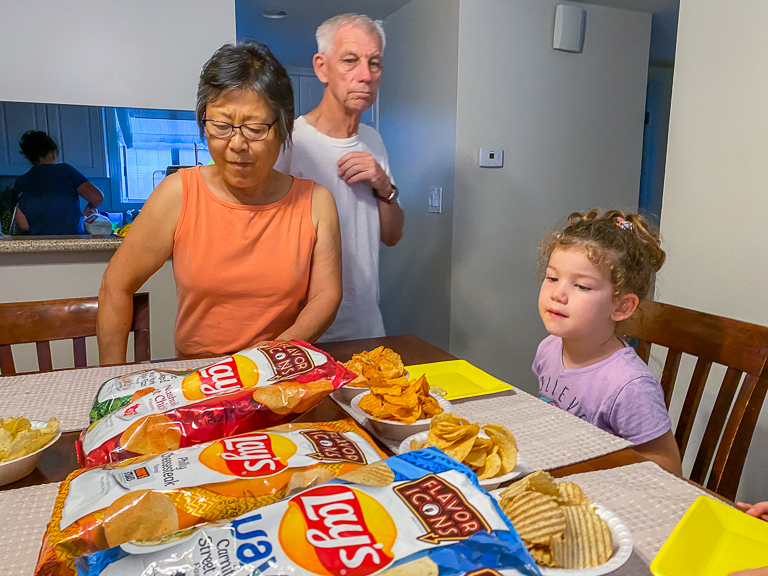 First up are the Kettle Cooked New York Style Pizza chips, inspired by Grimaldi's coal brick-oven pizzaria in Brooklyn New York. There's a Grimaldi's in nearby El Segundo California and I've had their delicious pizza. Let's hope Lay's can make it a tasty chip. 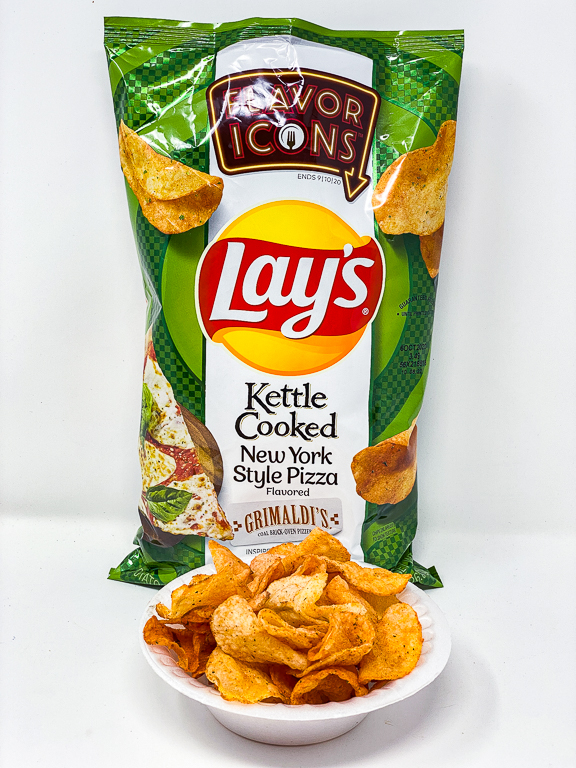 I love that the front of the bag has a big representation of the food the chip is meant to represent. This looks like their Traditional Pizza. 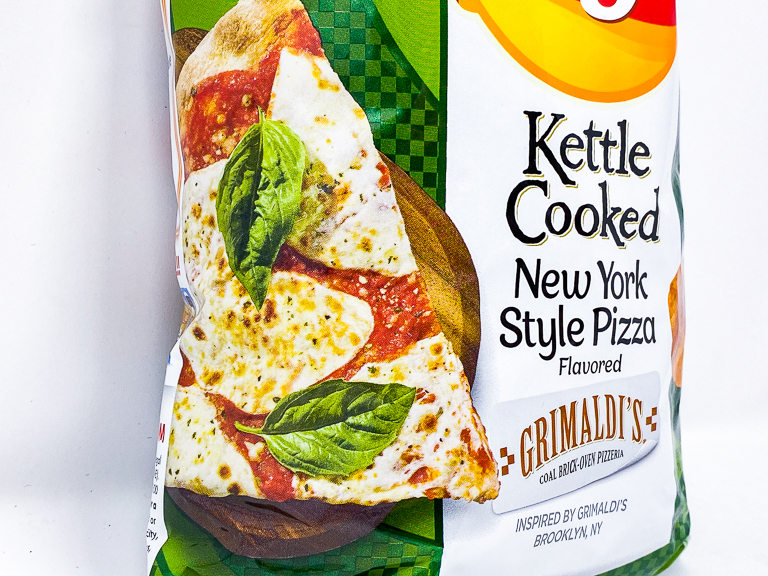 "Inspired by the dish that made Grimaldi's an icon in The Big Apple, here's a taste of their classic New York-style pizza."
How do you make a pizza chip? With flavors like tomato powder, mozzarella cheese, garlic, onion, and other pizza spices. How do they taste? I think they're pretty tasty. I like that they chose the Kettle Chips for this one since it gives it a nice crispy crunch! 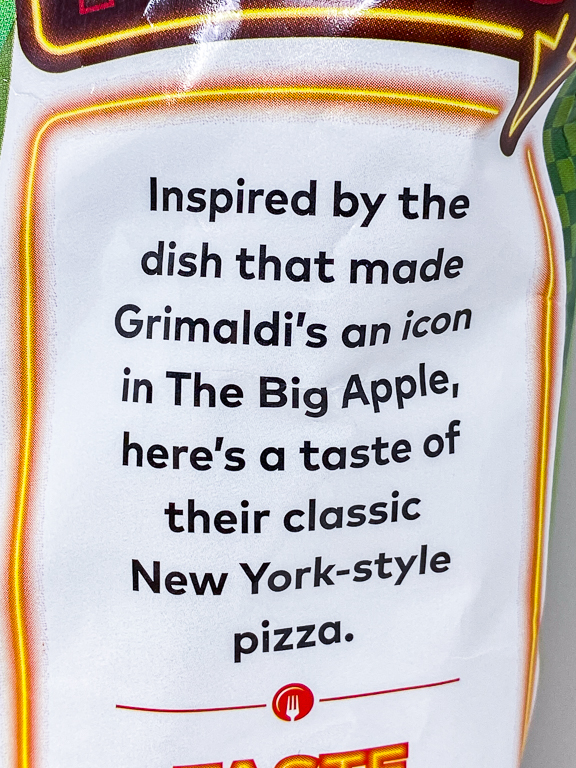 The milk is coming out so you know there's something spicy coming. 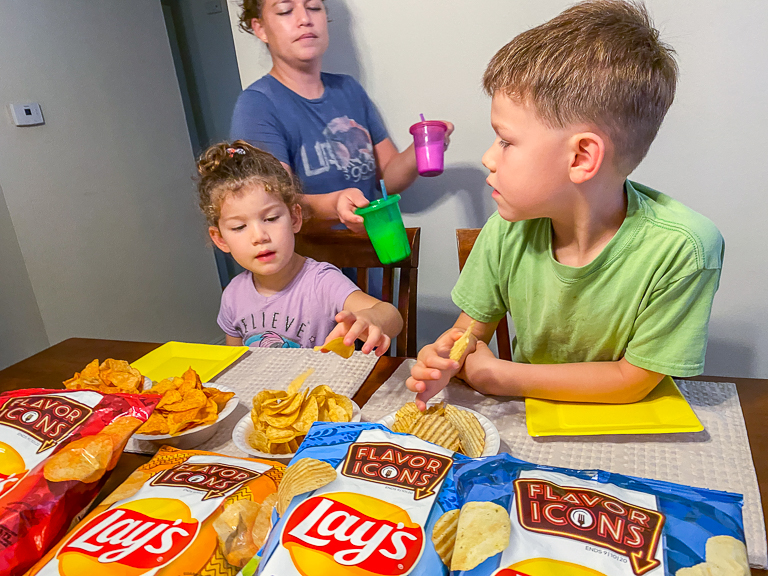 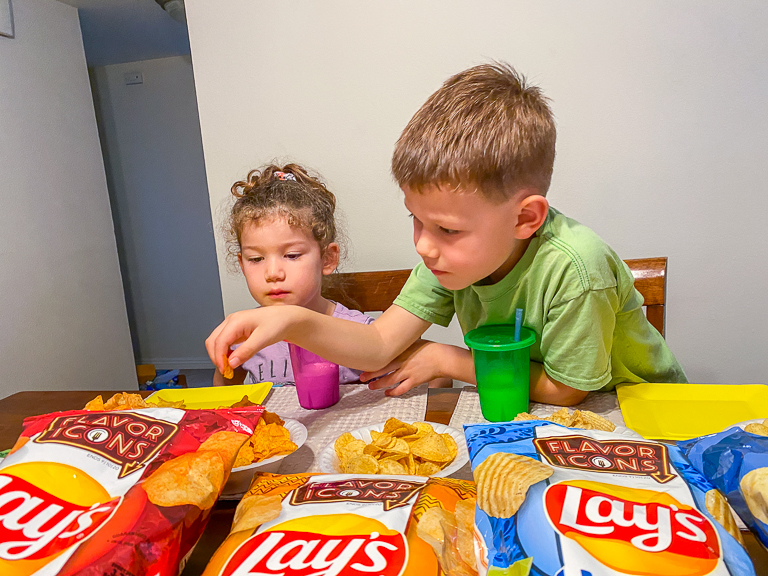 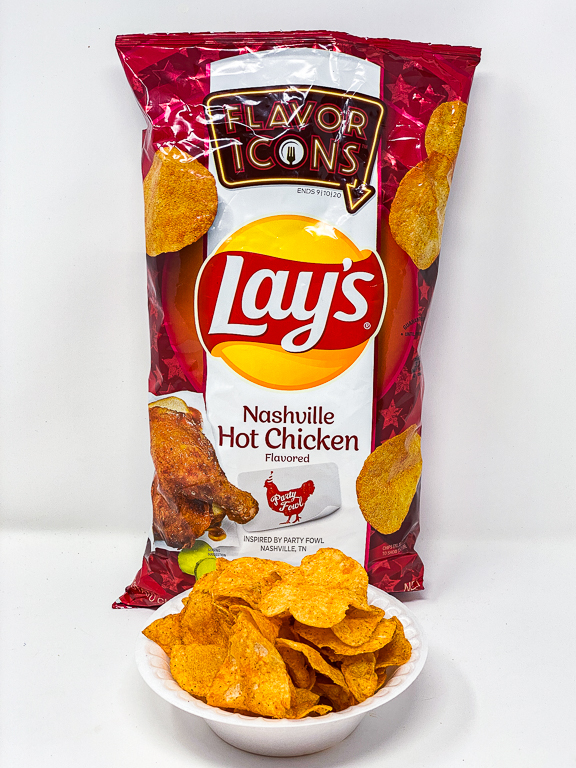 Nashville Hot Chicken is served on white bread with pickles. I wonder what flavors are going to end up in the chip. 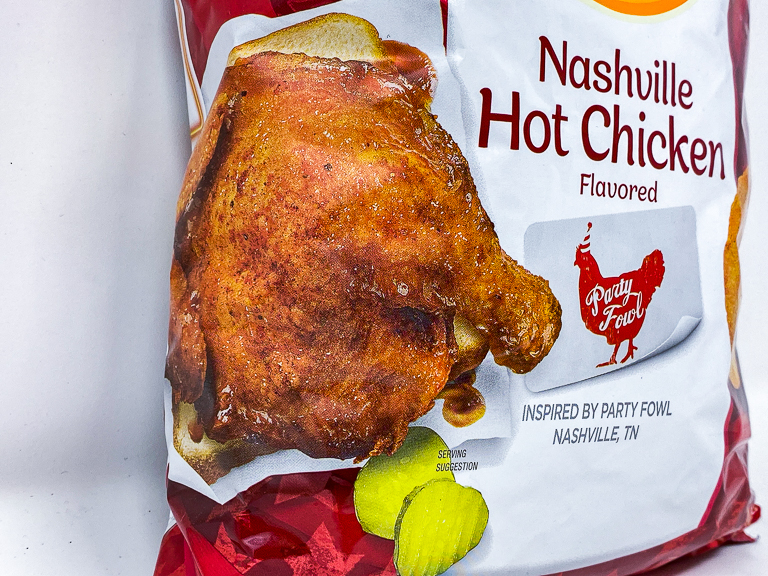 "Inspired by the Party Fowl dish that's the talk of Tennessee, here's a taste of their Nashville Hot Chicken."
To make these chips, Lay's uses salt, bacon fat, chicken fat, and other spices. To me, these were also really good. I'm a big fan of spicy foods and yes, these chips are spicy. It's a good thing the kids had milk to taste it with. I am getting a hint of chicken flavor, but it's different than the herb-savory chicken flavor you'd get from a bouillon cube. There's no pickle flavor to this either. But it is a hot and spicy chip. 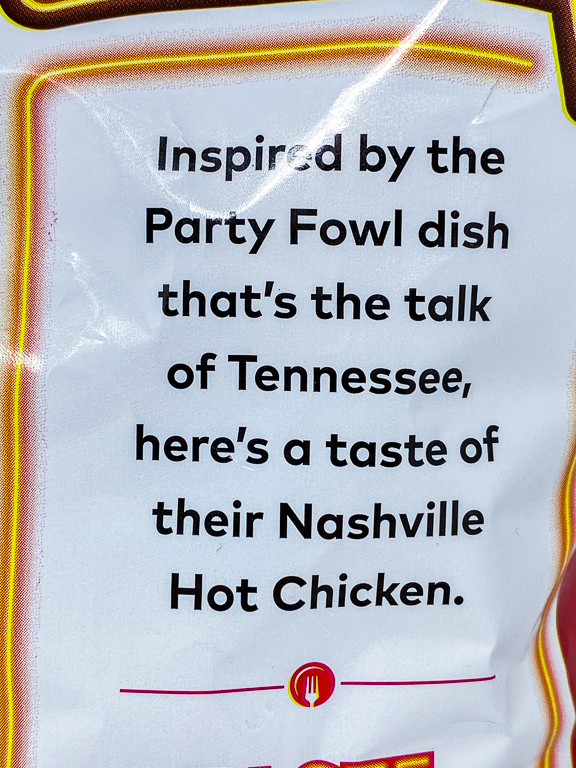 Our next Lay's chips is the Philly Cheesesteak inspired by Geno's Steaks in Philadelphia Pennsylvania. 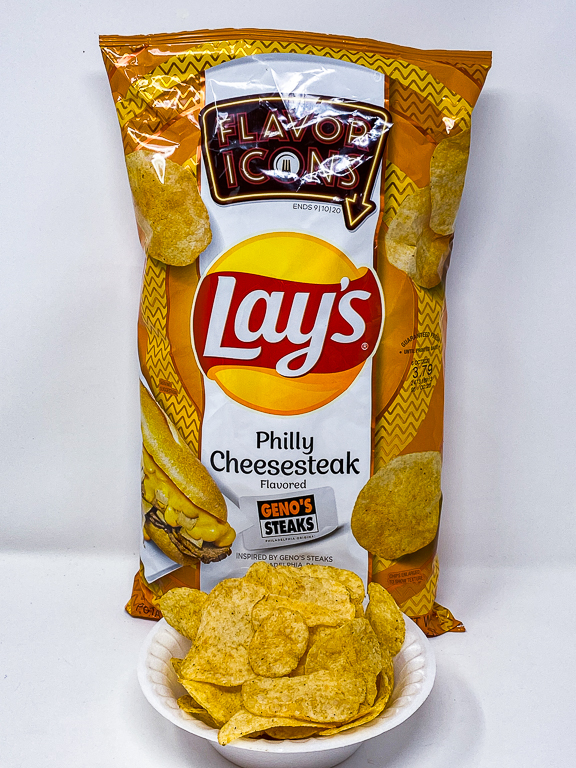 It's been so long since I've had a good cheesesteak. I might need to add it into the rotation of a meal to make at home. 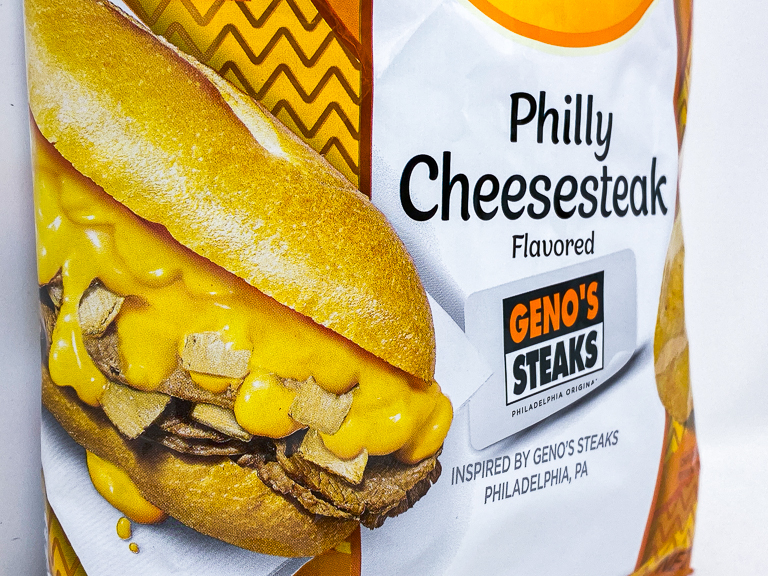 "Inspired by the dish that made Geno's Steaks a Philadelphia icon, here's a taste of their Philly cheesesteak."
This chip is delicious! The cheese flavor is the strongest overall flavor, but I can pick up hints of onion and beef. Indeed, looking at the ingredient list, for natural flavors it uses Beef, cheddar cheese, onion powder, brown sugar, and other tasty things. 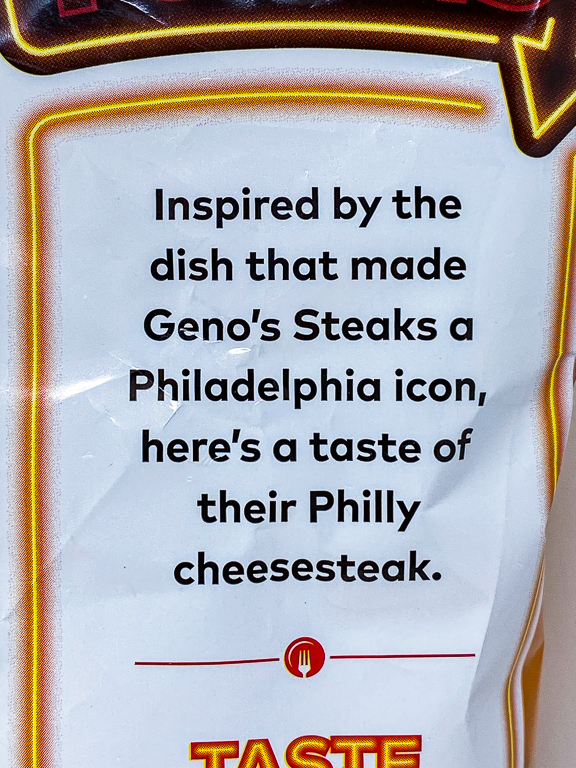 Our next chip is the Lay's Wavy Carnitas Street Taco, inspired by El Torito in Marina del Rey California. 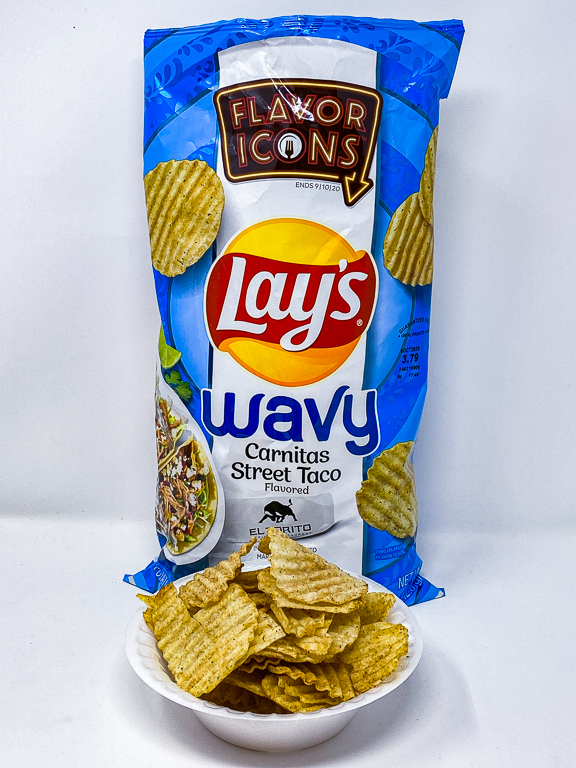 Street tacos are pretty delicious, and Southern Los Angeles has some pretty great restaurants that make them well. 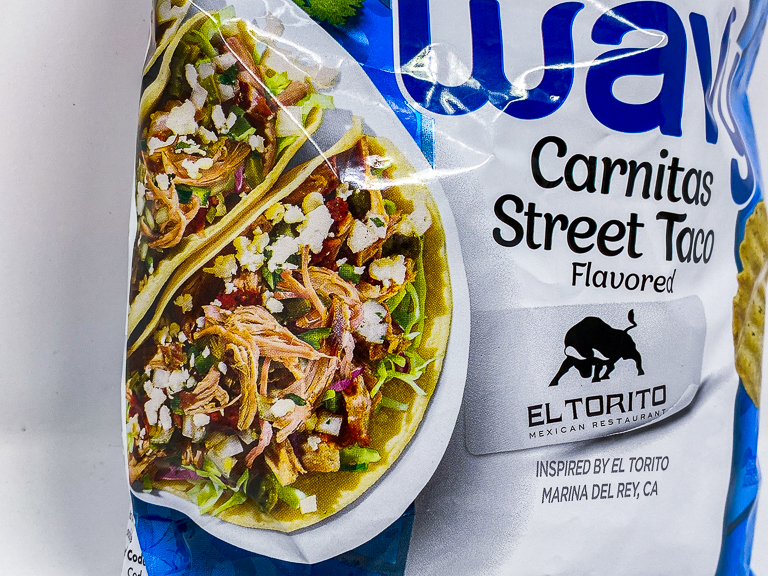 "Inspired by the dish from El Torito that has everyone in Los Angeles talking, here's a taste of their carnitas street tacos."
What natural ingredients do you use to make a Carnitas Street Taco? Pork, onion, jalapeno, and bacon fat, among other flavors. I would swear I taste a little cilantro and lime in there too, but I'm not seeing them on the ingredient list. So what did people think of them? 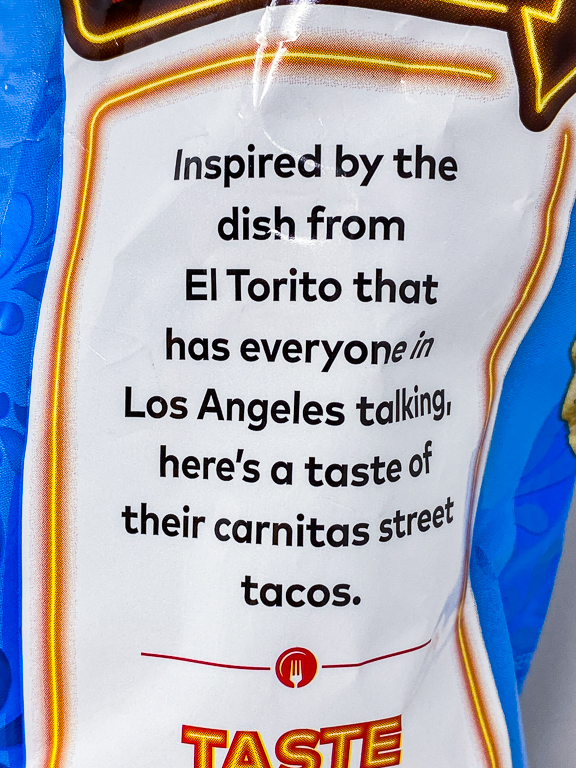 Well that's not a good face. 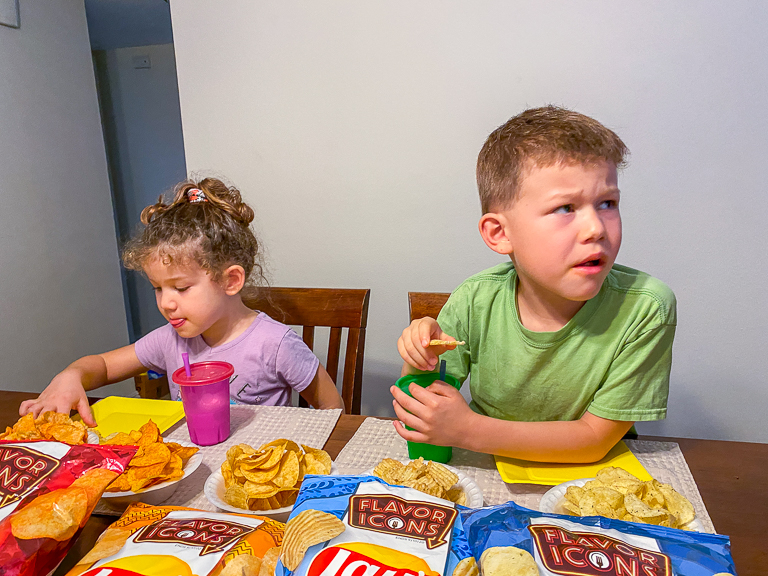 Theresa claimed it was the worst chip she has ever put in her mouth (that's pretty harsh). She went over to the trash can and spat it out. Ian, Richard, and Chi think it's yucky too. Alli and I don't think it's too bad though. It's not a favorite, and definitely not 10 thumbs up, (sorry Alli), but I can see what they're going for with it. 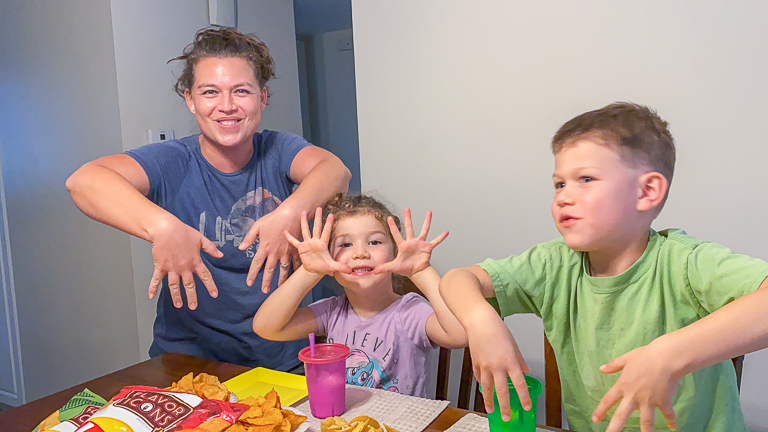 And that's all, right? Just four chip flavors to try according to the back of each of the bags.
No! There's a fifth chip flavor this year! 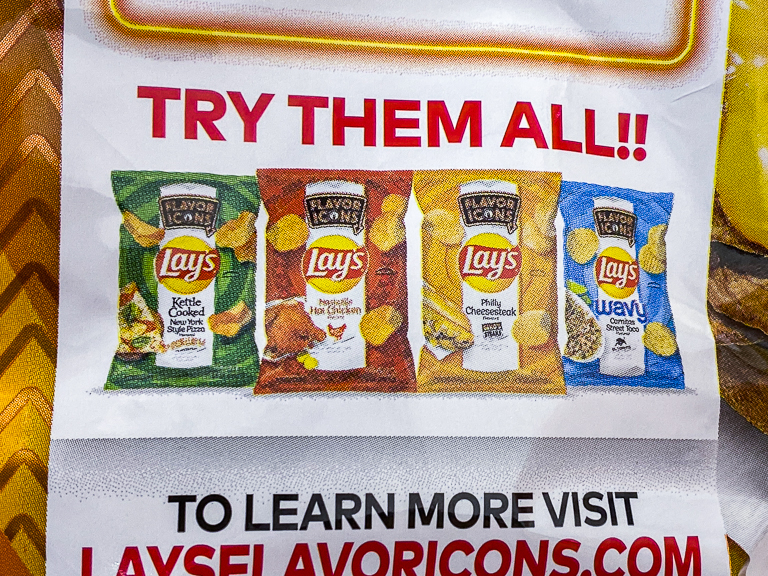 Lay's Chile Relleno chips are inspired by Cocina Azul in Albuquerque New Mexico. These chips are exclusive to Walmart and 7/11, so I guess that's why they didn't show up on the packaging with all the others. 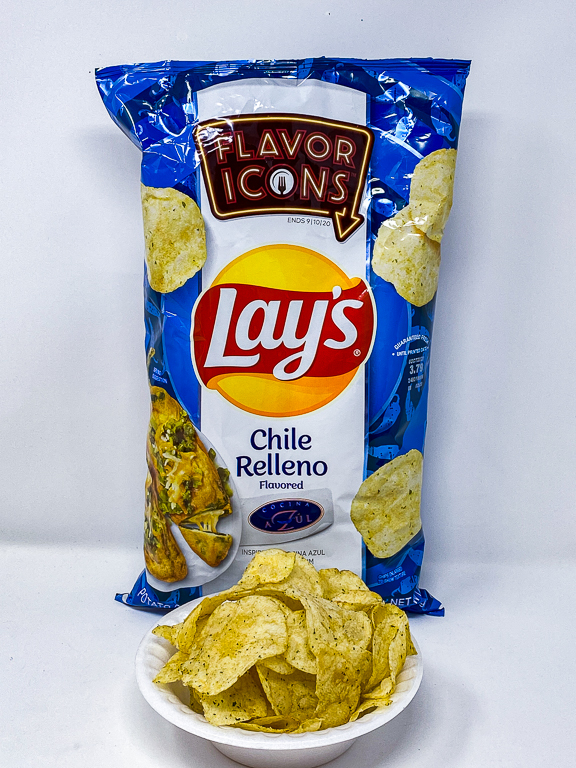 The Chile Relleno is a battered and deep fried green chile dish. 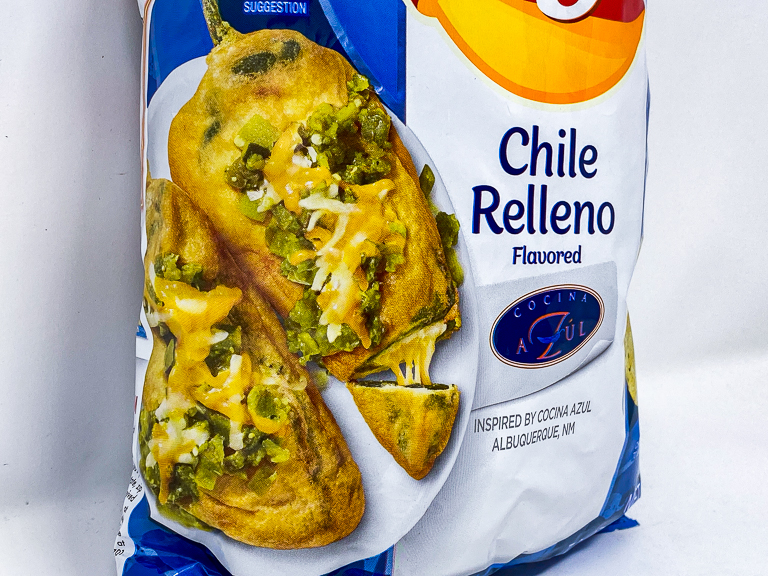 Inspired by the dish from Cocina Azul that's creating buzz all over Albuquerque, here's a taste of their Chile Relleno.
I'm definitely getting a bell pepper flavor from this one. Looking at the ingredients, yes, there's bell pepper. It also says there's cheddar cheese (I can't really taste it), sour cream, and chicken fat. Interesting that so many of these chips this year used animal fats. I guess they have good flavor. 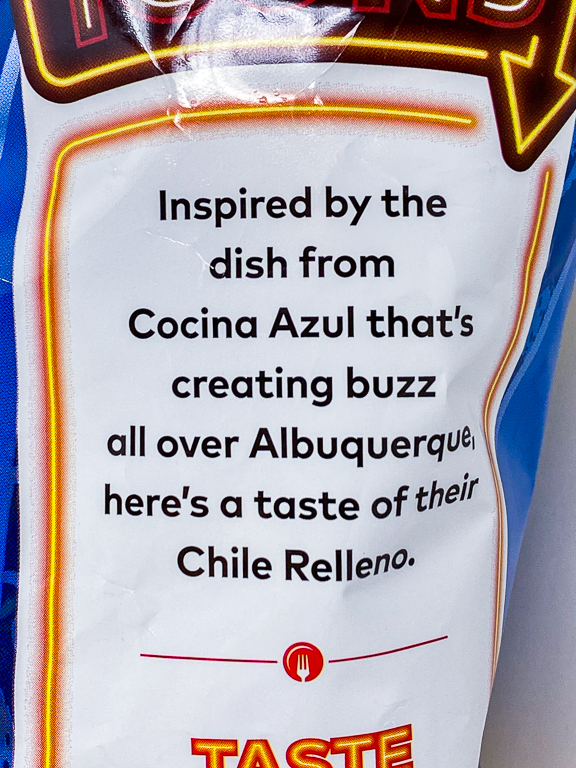 How did everyone feel about the chips this year? Feelings were mixed.
Theresa rejected 4 of the 5 flavors, saying this was Lay's worst year ever. Having only 20% that she'd eat again is not a good passing grade. For the rest of us, there were some winners and some losers. When it came time to vote for the favorites, five of us chose the Philly Cheesesteak. The one dissenter was Chi who voted for the Chile Relleno chips. 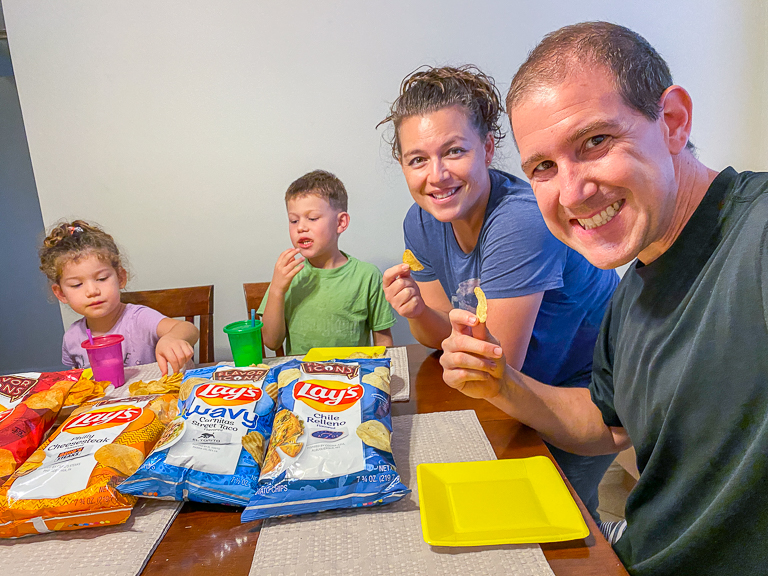 Little Miss Organized. Thanks for following along with our 2020 Lay's Chip Taste Test! 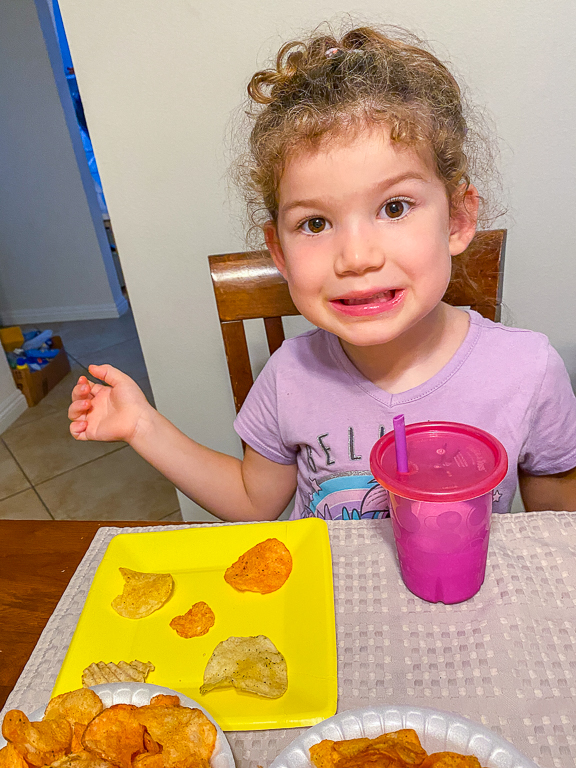