Happy Halloween! We've got lots of fun things going on today. So many that I'm going to breaking it up across a few different posts. We'll start with Halloween decorations and our Halloween Pumpkins! 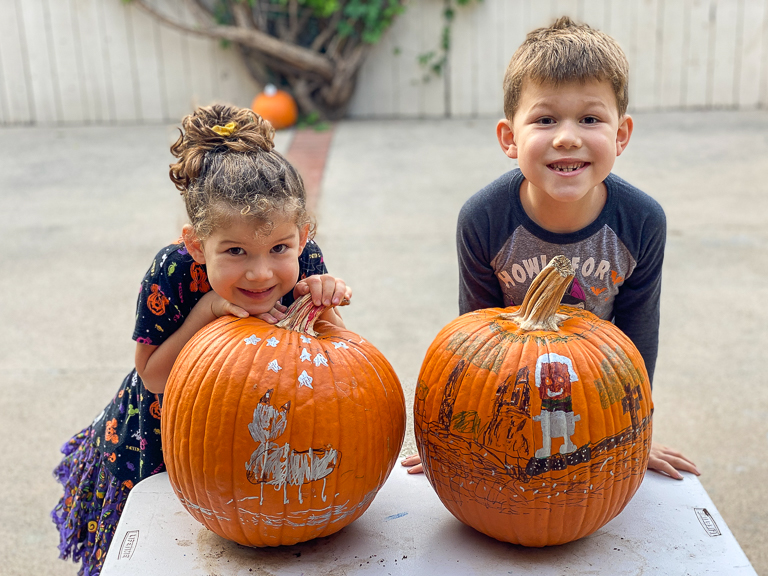 With all the closures and restrictions due to Covid, it's nice to have something to look forward to. Halloween has been on our radar since the beginning of October. Sams Club had really large pumpkins for only $6. We picked up 3 pretty early on and they decorated our porch for a few weeks. As Halloween got closer, it's time to start decorating the front of the house. Wow, look at Little Miss Muscles. 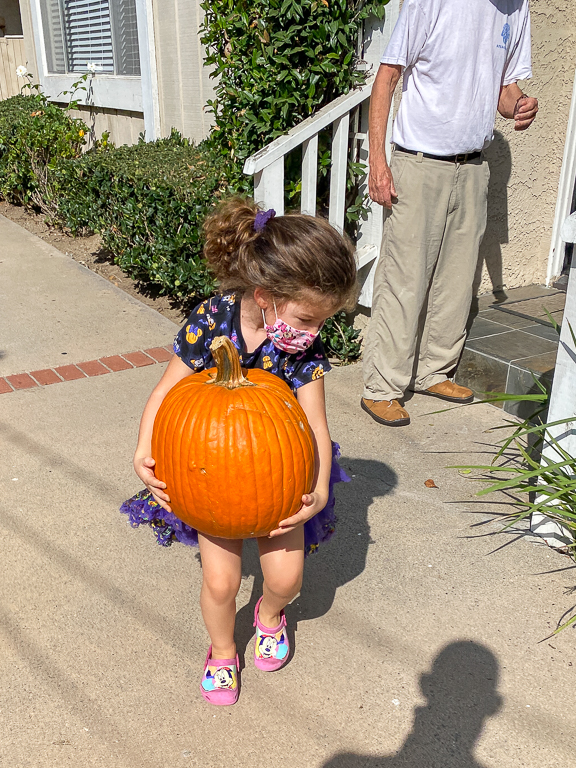 Nothing too crazy for Halloween decorations. A few pumpkins, some things hanging from the trees, and some lights. 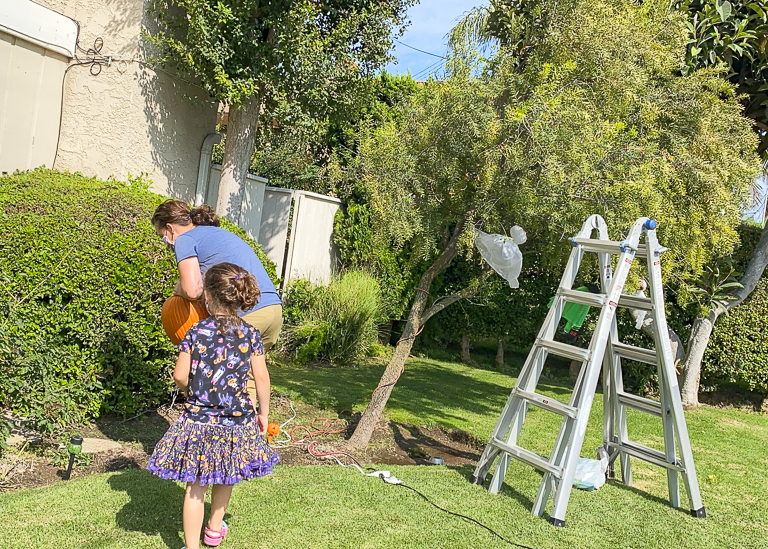 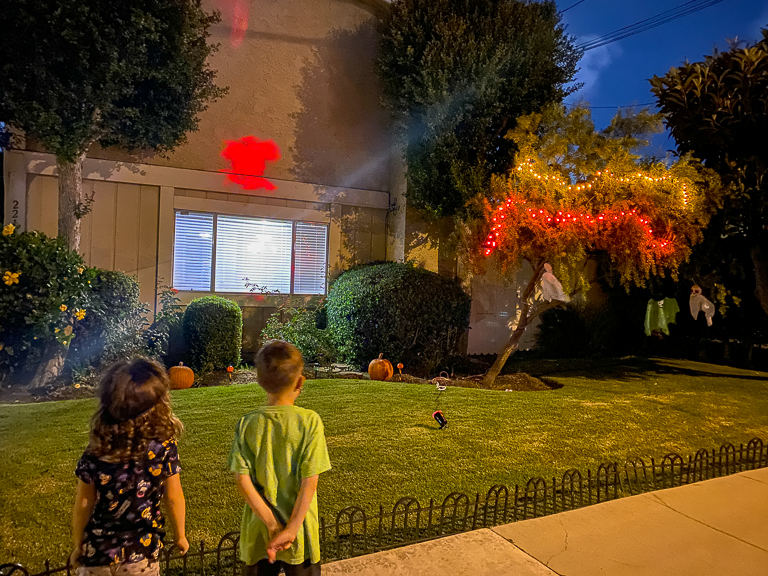 The day of Halloween is finally here! The kids dressed themselves in all Halloween garb. Even their socks! Theresa took a look at the tag inside Ian's shirt. Um, 3T. You've had that for a few years now, haven't you. 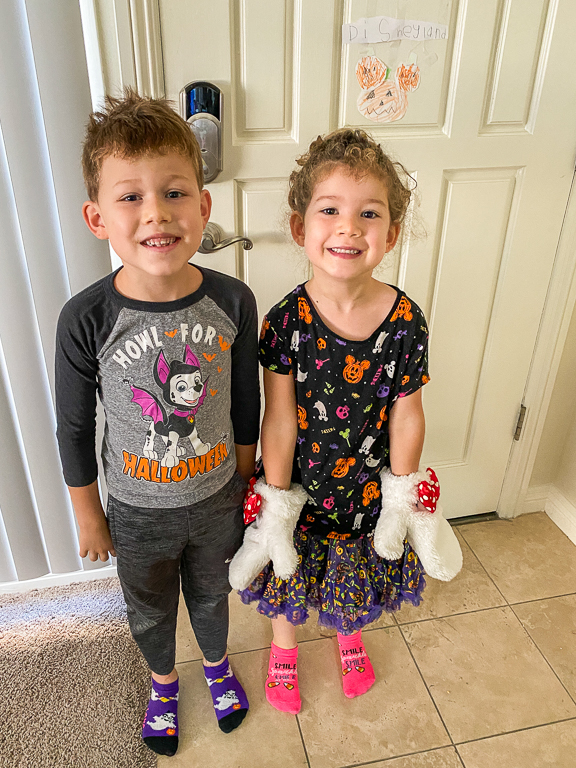 Throughout the week, I've noticed decorations the kids have created and hung up around the house. Good memory of the Disneyland pumpkin guys. 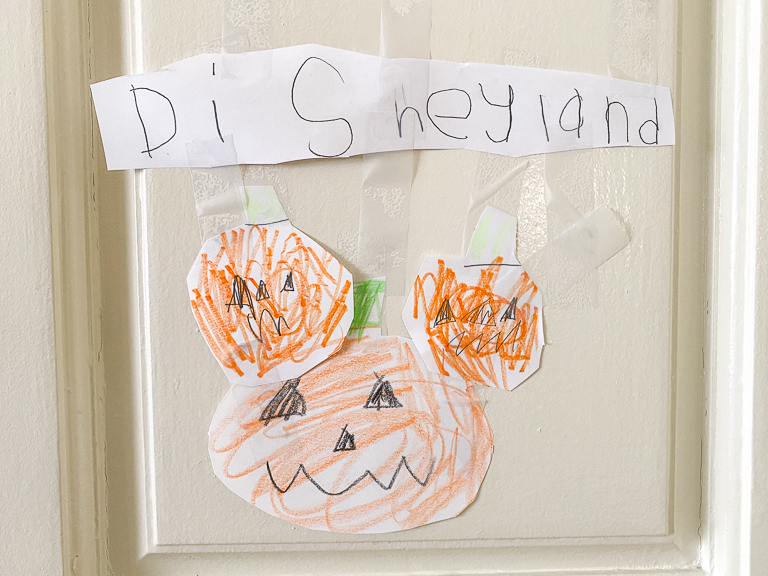 And they'd make even more decorations, or hang appropriate characters including Zero, and Pumpkin Duffy around the house too. 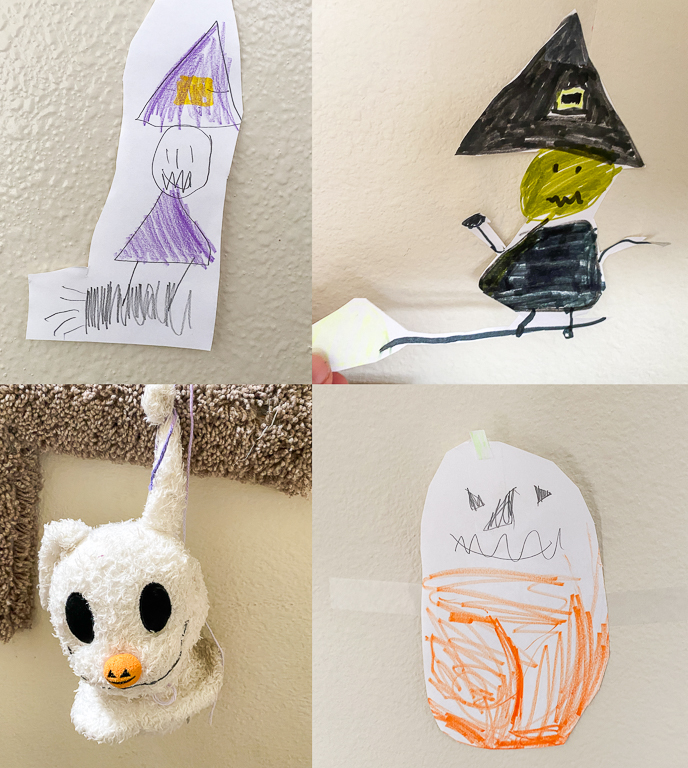 It's time to decorate our pumpkins and time to retrieve them from the front yard. Two of the pumpkins were just fine. When I went to pick this one up, the back if it fell out. 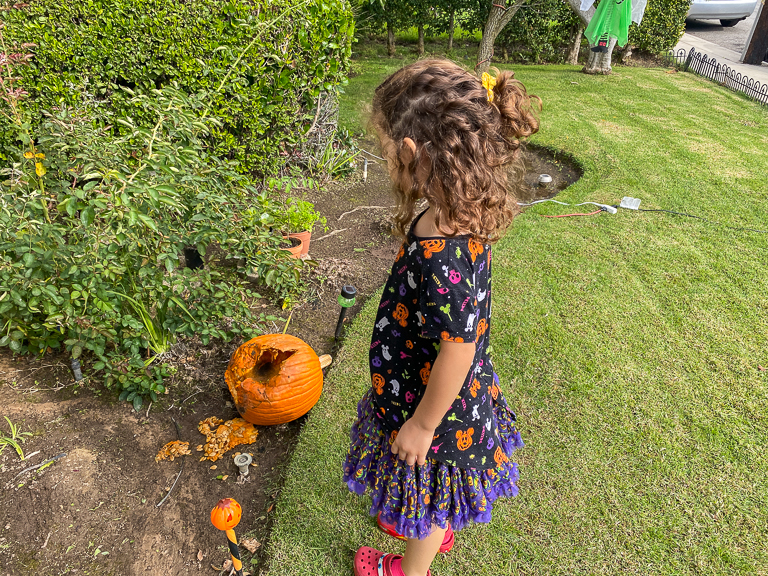 Hmm. I wonder if a sprinkler was hitting it or something. Alli said she thinks a kitty devoured it. Well at least there's two left. Just enough for the kids to use, but I'll have to find other ways to be creative this year. 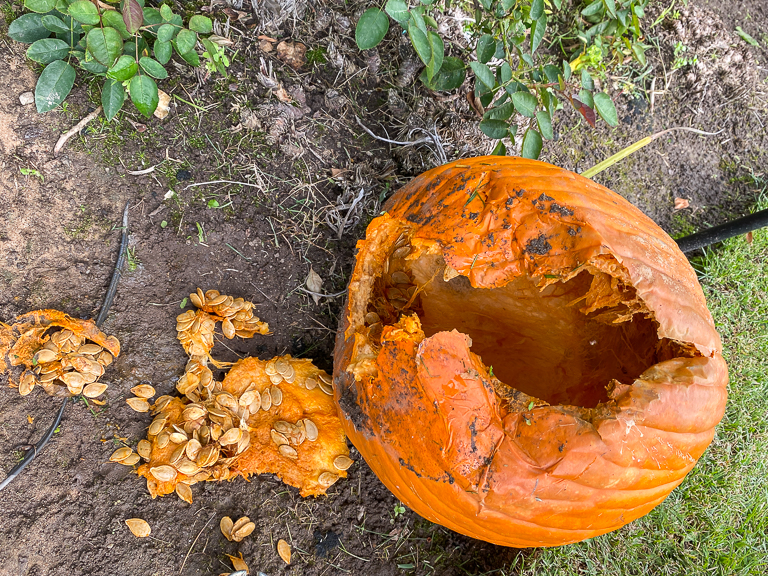 We gave them the option to either paint them, carve them, or use Sharpie markers on them. They ended up opting for the Sharpies. Well that should make cleanup a bit easier. 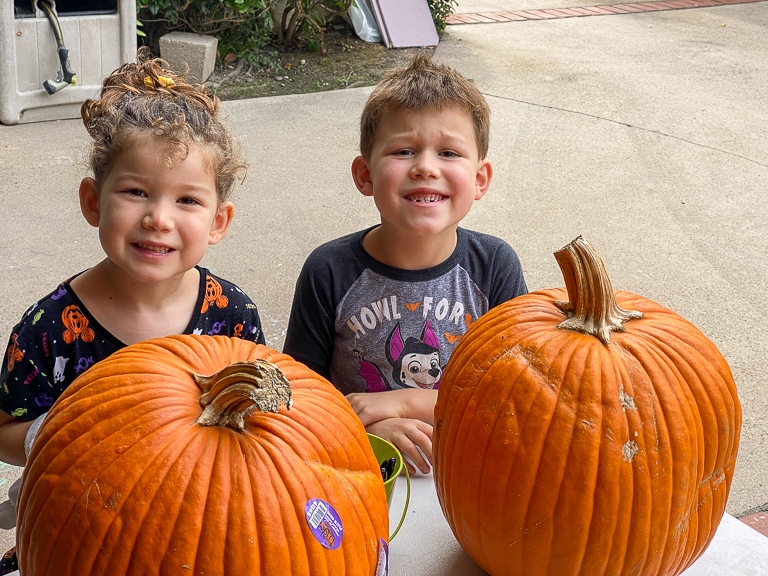 I love it Alli. A kitty cat and some stars. 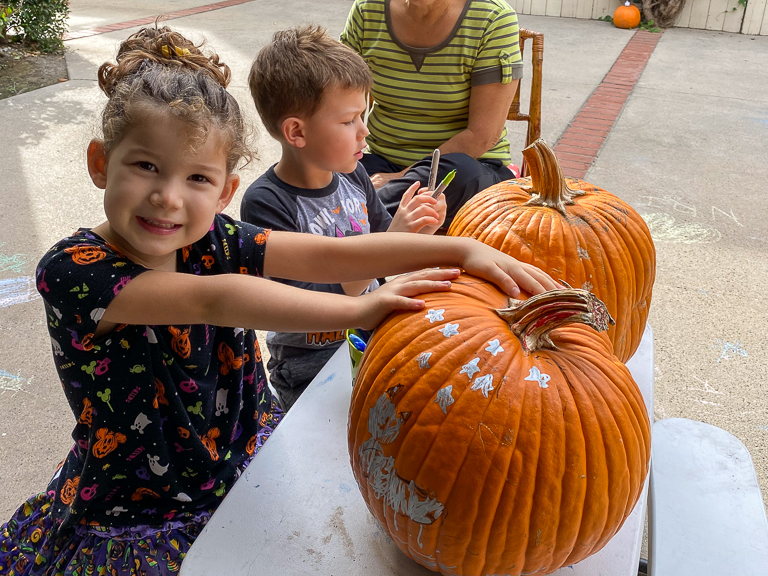 And on the other side, she drew a portrait of her cousin Aubrey. Looks just like her Alli. Why Aubrey?
Alli - Because when the virus is over, I want to go to her house.
I know girlie. I miss going on our trips to see family too. 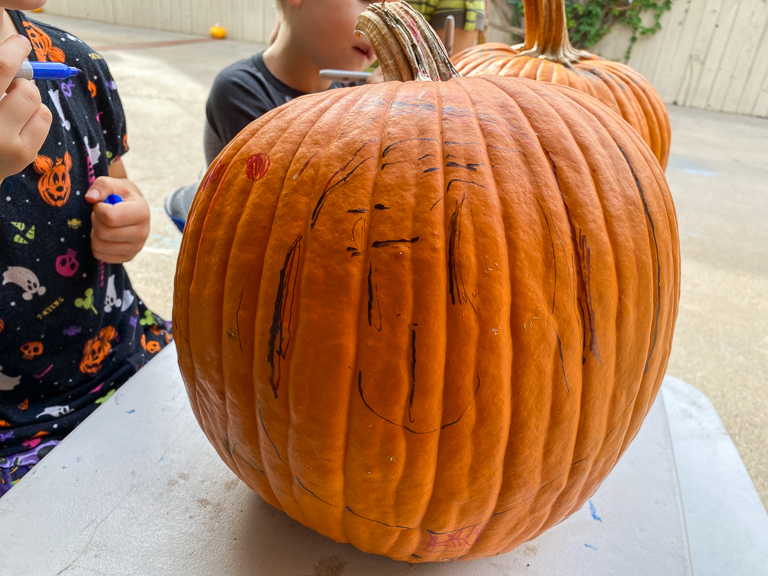 Ian has been getting really into Minecraft, so he's making a Minecraft pumpkin. 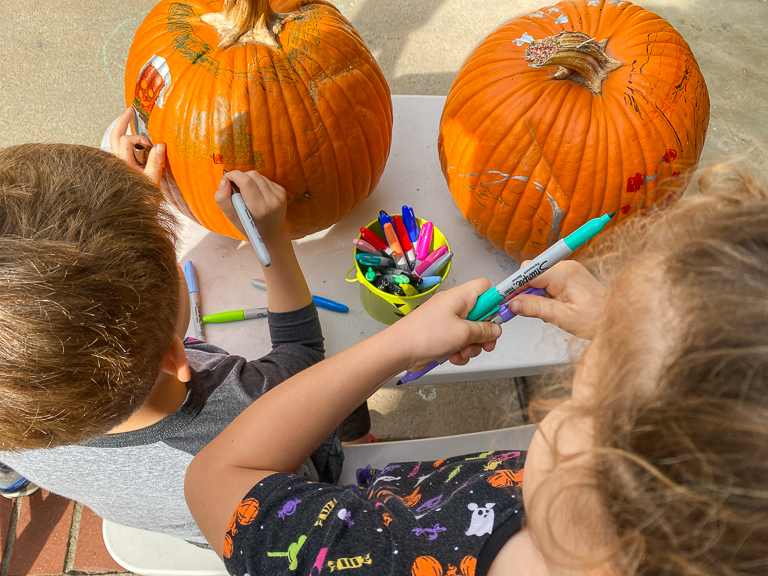 He said it took him a really long time. Probably over an hour.
Looking at the timestamps on my photos, you're right Ian. It did take over an hour. Nice work! 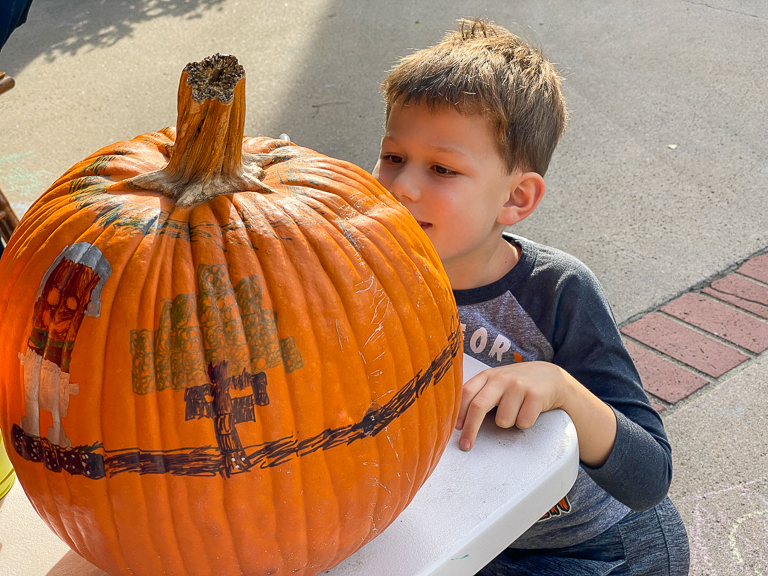 Pose with your pumpkins kids! 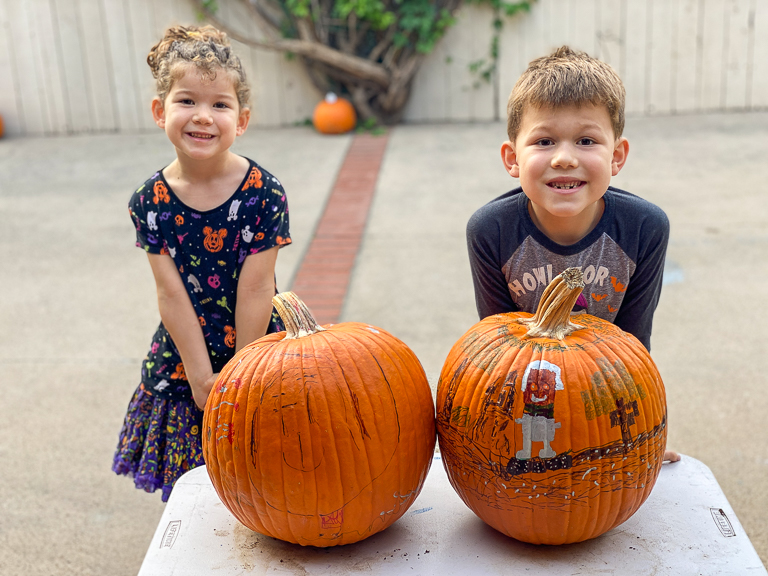 And here's the kitty that Alli is modeling her pumpkin after. It's a neighborhood cat that is always always around. She sees you walking and then she comes running towards you. Alli is showing off her pumpkin to her. 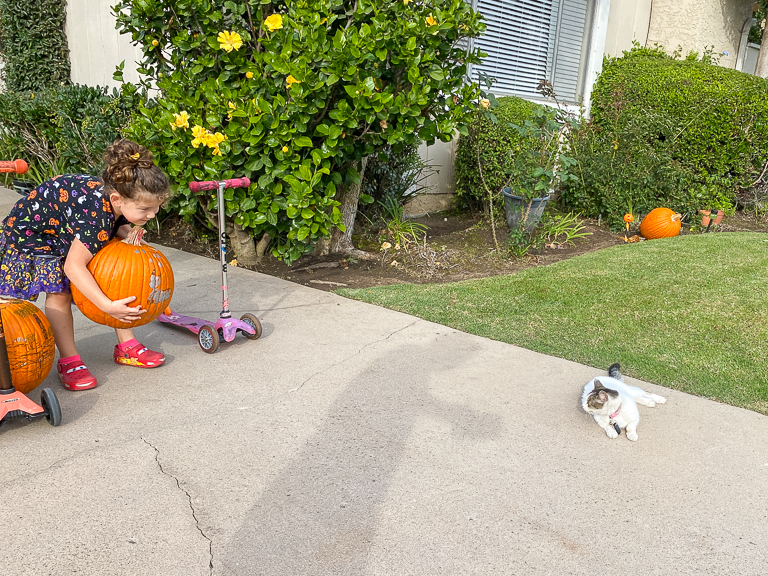 Nice pose! And nice job Alli and Ian with your pumpkins this year! Since you drew on them instead of carved into them, they might just last until Thanksgiving! 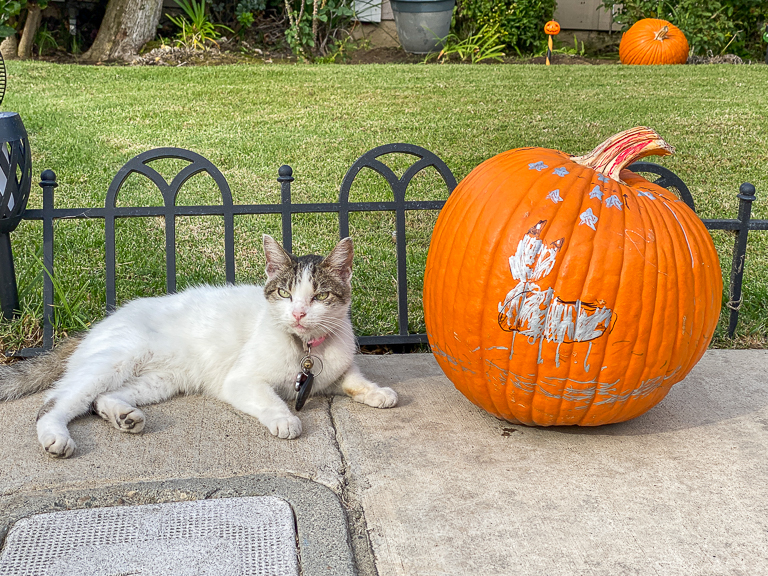