Time for another Saturday Morning Cereal! This time it's an interesting one from Captain Crunch. We're going to be tasting Captain Crunch's Sprinkled Donut Crunch! 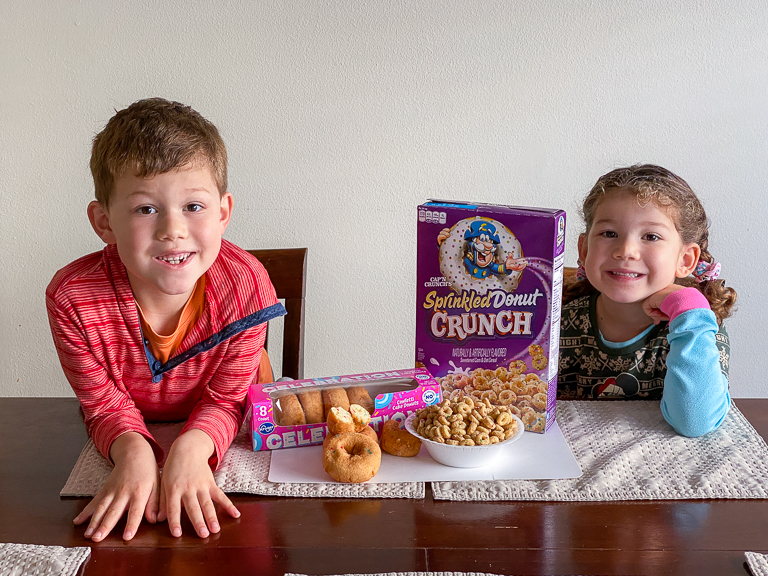 And of course to go with it, we're going to be having some real Celebration Confetti Cake Donuts. 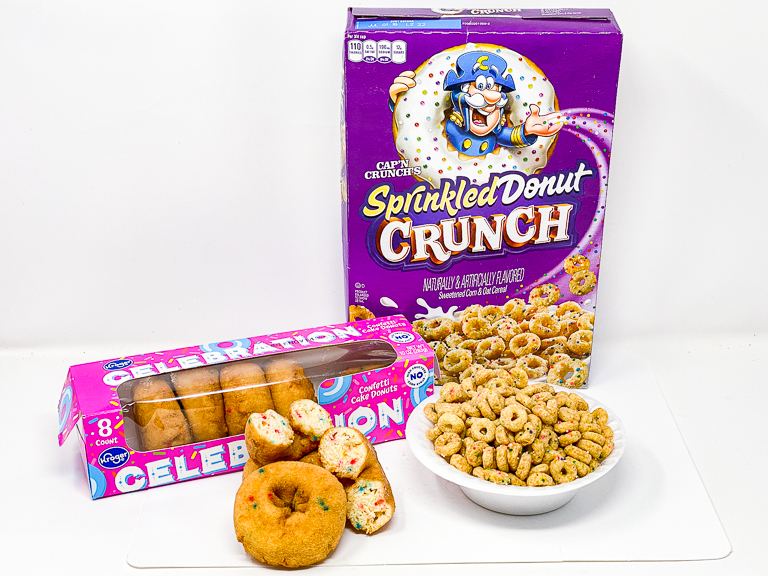 Back when we were trying Captain Crunch's Oops! All Berries! the side of the box invited us to "Try Our Fleet of Flavors!". There's the 3 pretty standard flavors, but then there's that one outlier. Sprinkled Donut Crunch? That's an interesting one. 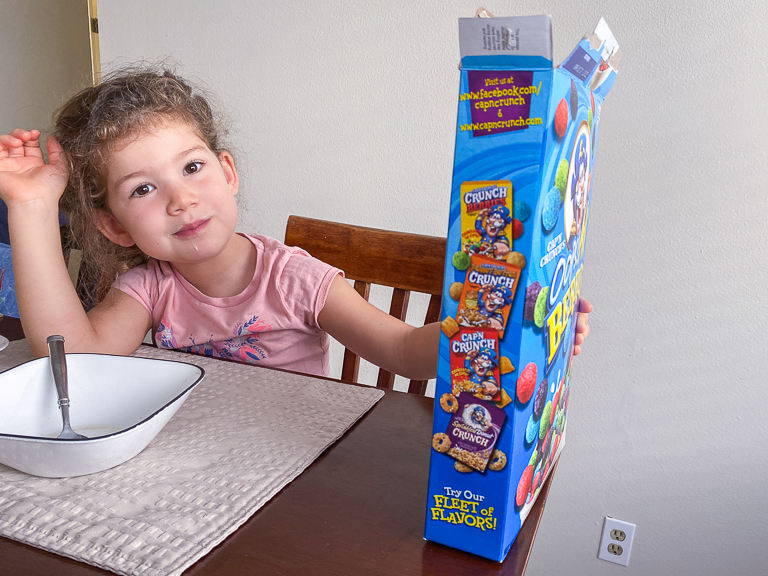 Even though the box of Oops All Berries was recent, no stores that I could find had these Sprinkled Donut Crunch cereals in stock. Fortunately for me, I was able to find an old, albeit expired, box! From the manufacturer's website:
- Finally a donut you can munch by the dozens
- Each vanilla donut-flavored piece is topped with colorful sprinkles and the stuff of dreams
I was thinking the cereal would be a little smaller, but it's about the size of a Froot Loop. And for sprinkles, they've got lots of little Nonpareils coating these mini donuts. 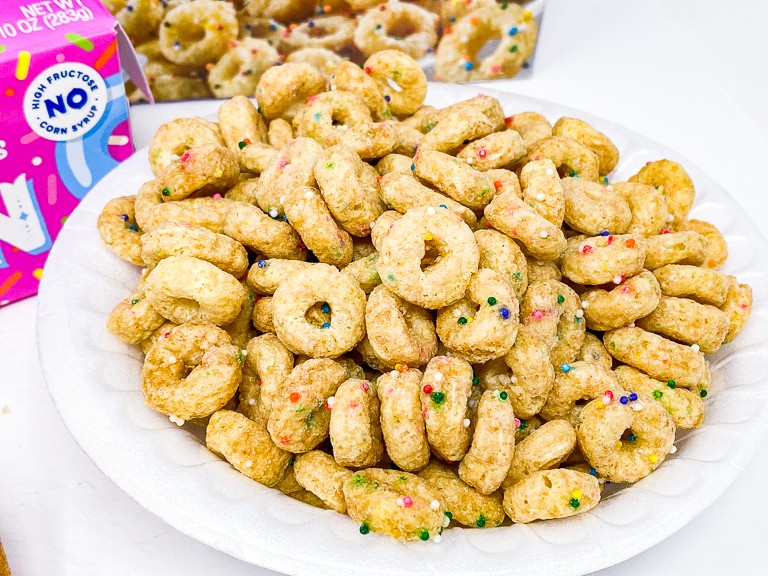 For our donuts, I found these Kroger branded Celebration Confetti Cake Donuts. 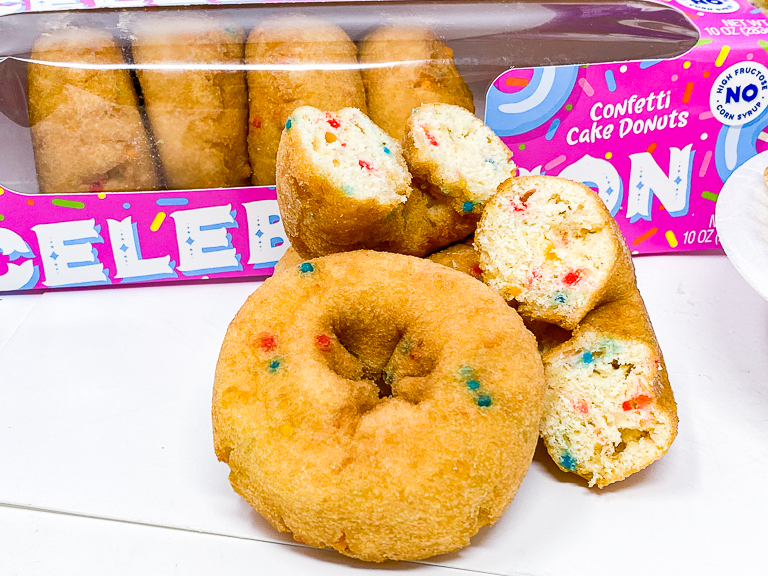 These also have sprinkles scattered in the batter. I'd say the donut cereal did a good job matching the actual donuts. 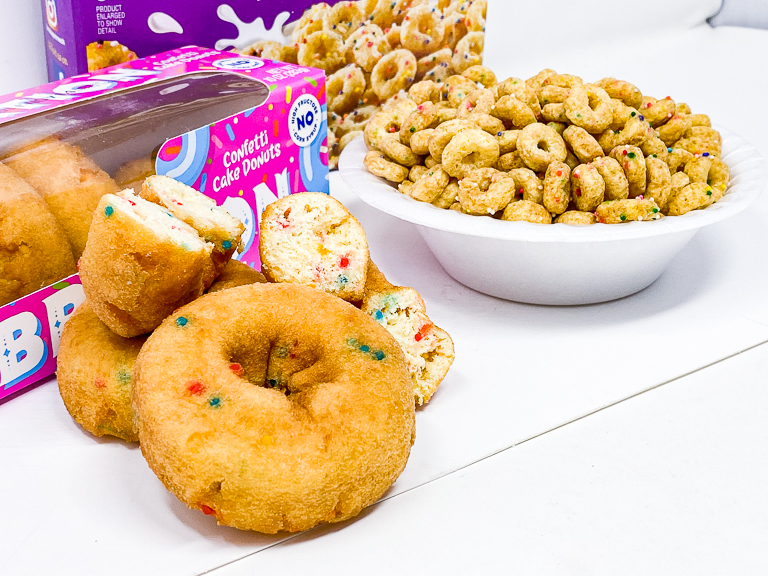 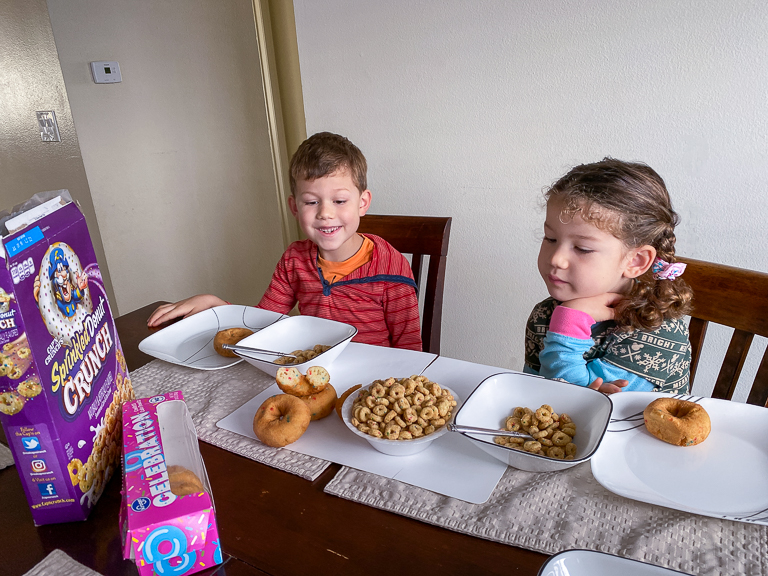 First, we'll try the Sprinkled Donut Crunch cereal. Dry to start, in order to get a better taste of the flavor. 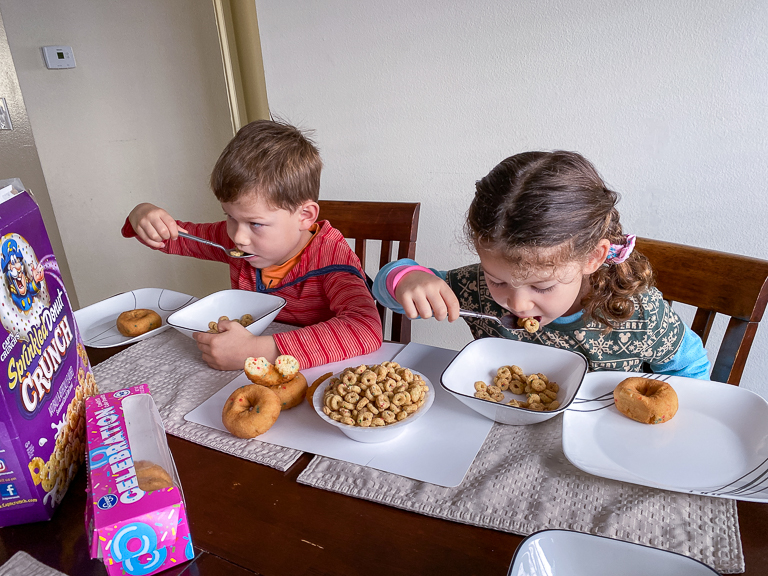 Uh, I don't think he particularly likes that flavor. It's got a bit of a vanilla flavor to it. The sprinkles don't really add much to it. It's really just like a vanilla flavored cereal. I don't get why he dislikes it so much. 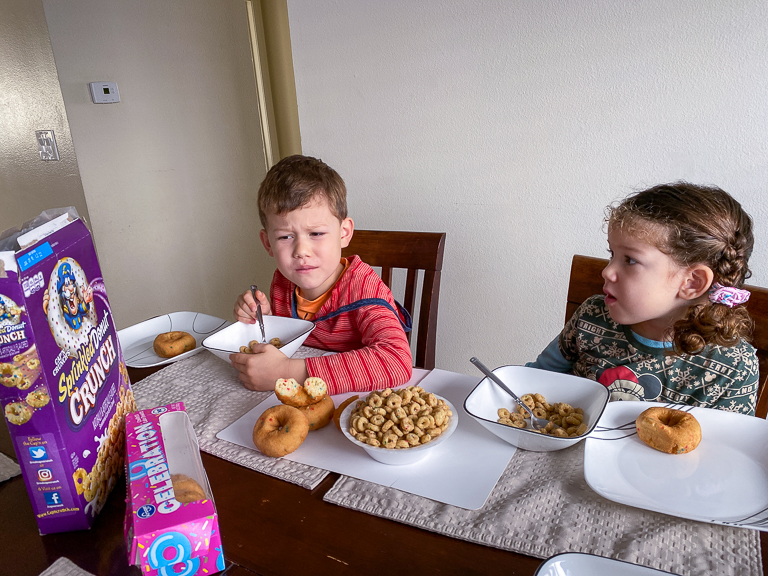 While Ian is moving on to the donut, Alli is ready to try hers with milk. 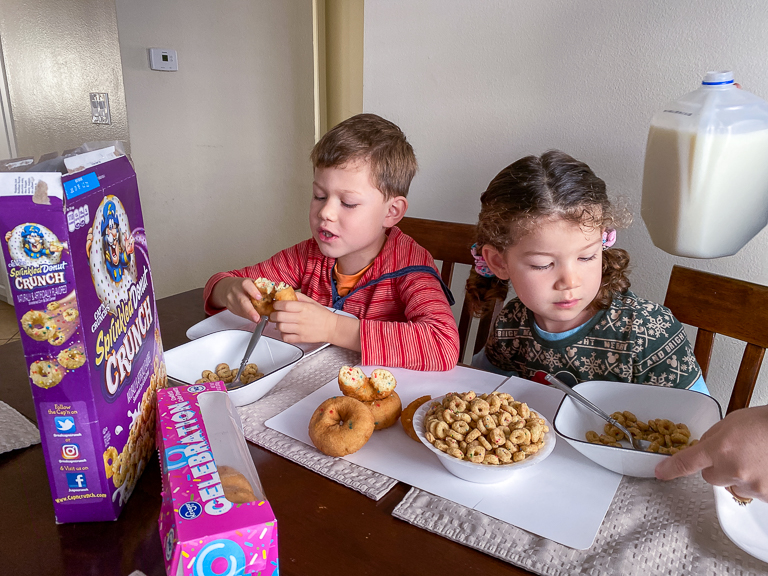 And Theresa is coming to join us for this one. Giving that Sprinkled Donut Crunch a try. 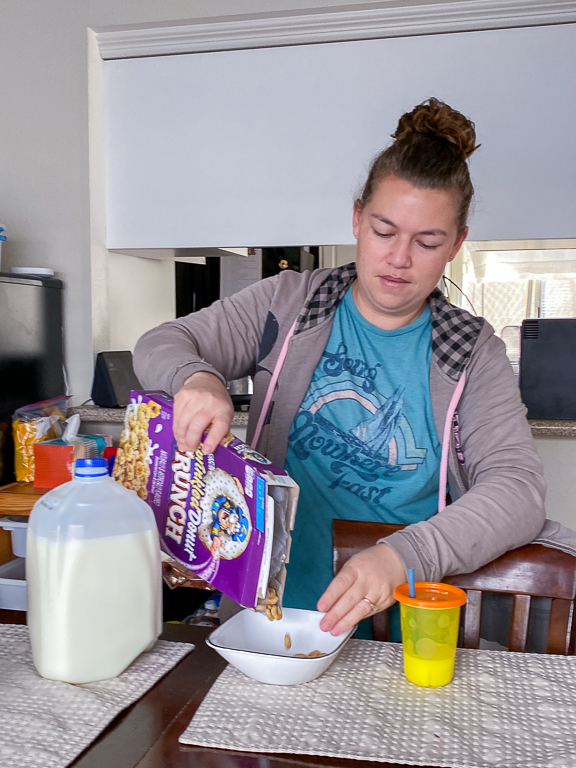 The faces this girl makes. Yes, those are donuts are pretty different sizes, aren't they. 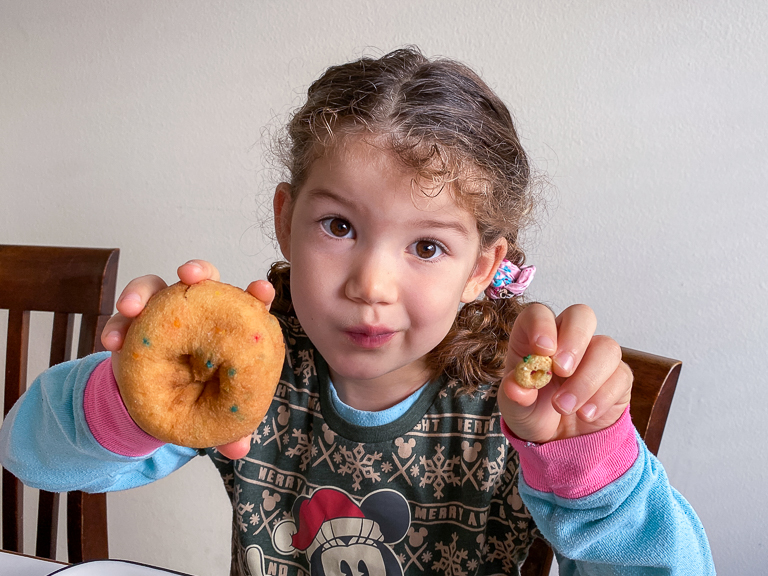 And check out these sprinkles on the inside too. 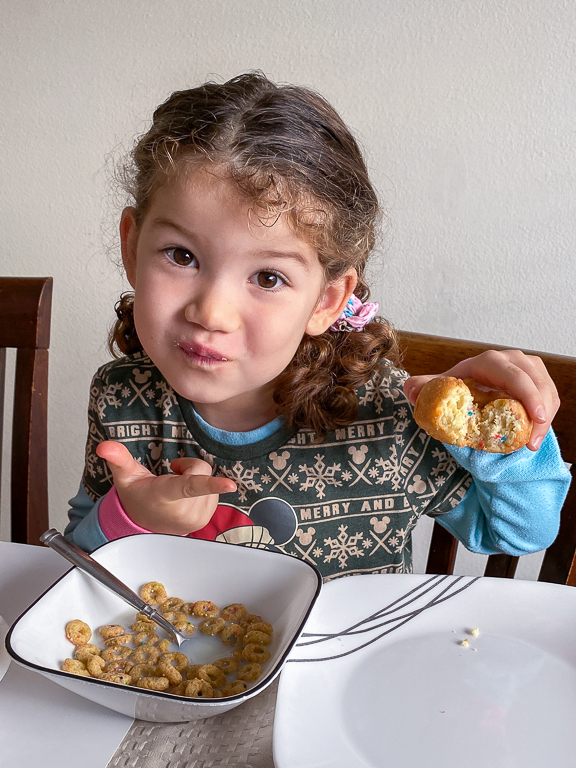 My breakfast this morning. 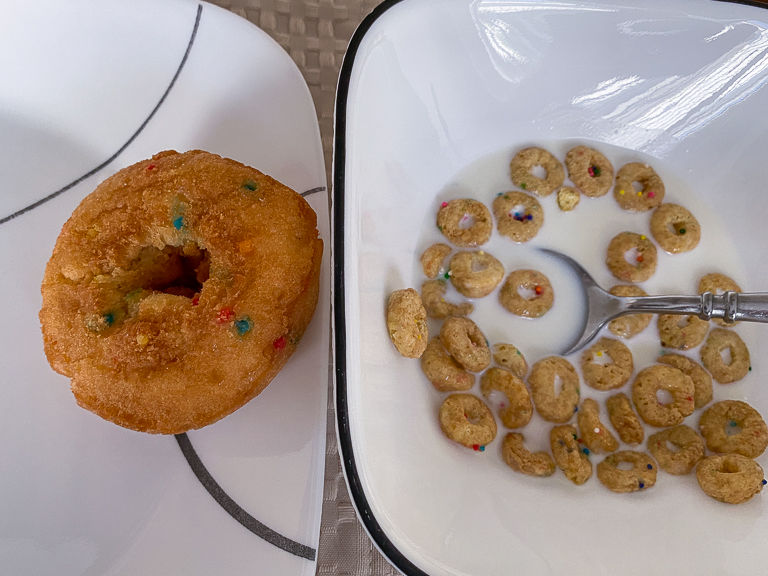 Thanks for the photo Alli.
As for the cereal, it's a vanilla flavored loop. I'm not getting any of the Crunch corn cereal flavor that I'm used to. It could be just about any brand at this point.
And as for the Kroger donuts... let's just say the entire rest of the box went into the bin after this. They were not good at all. 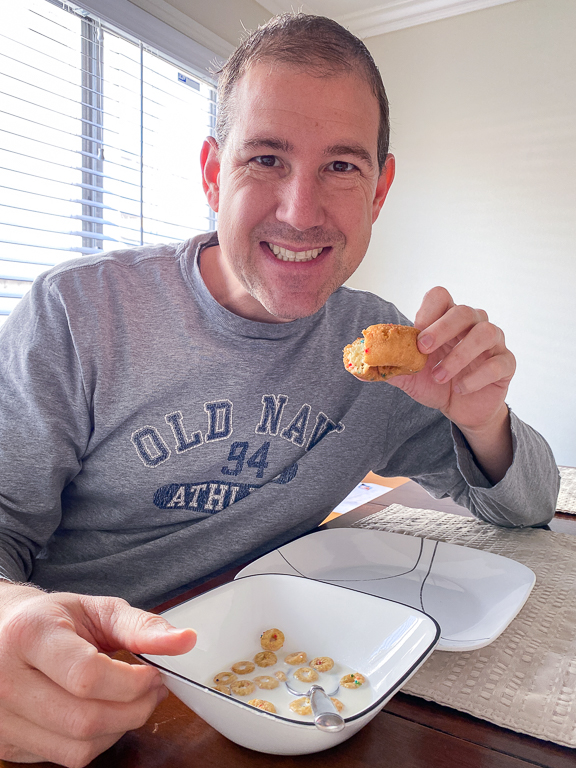 Theresa has switched over to Honey Smacks after her brief taste of Sprinkled Donut Cereal. 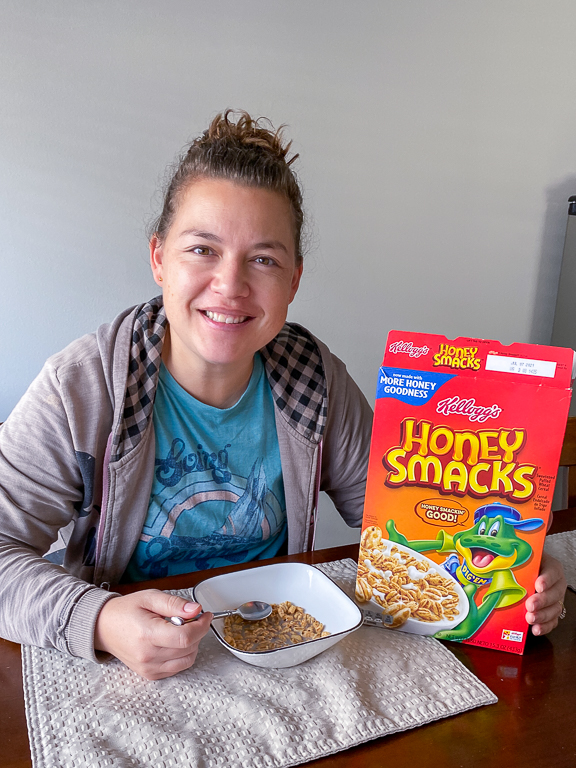 Ian has left his cereal mostly untouched, but finished the donut. 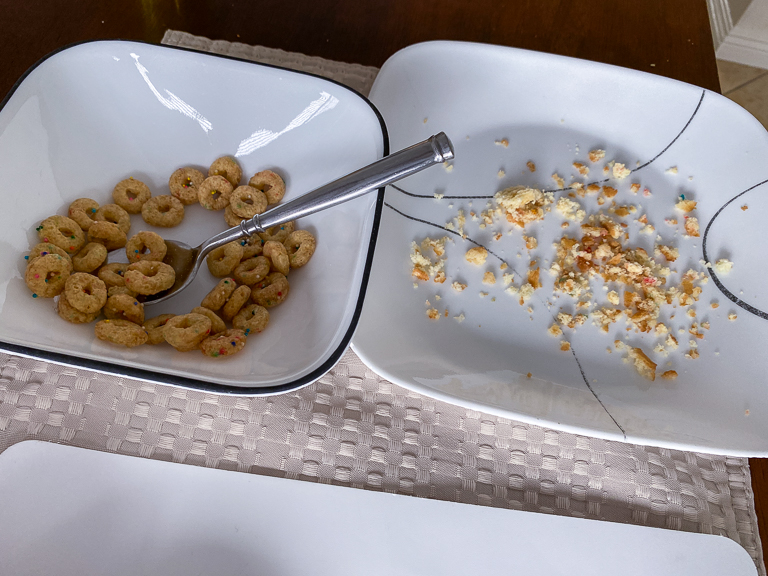 Our never-picky eater Alli is okay with both the donut and the cereal. She's enjoying the games on the back of the box. 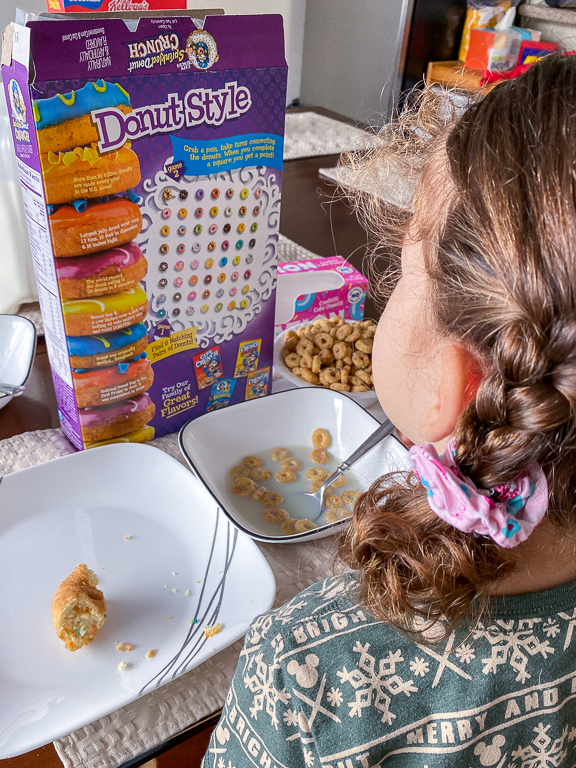 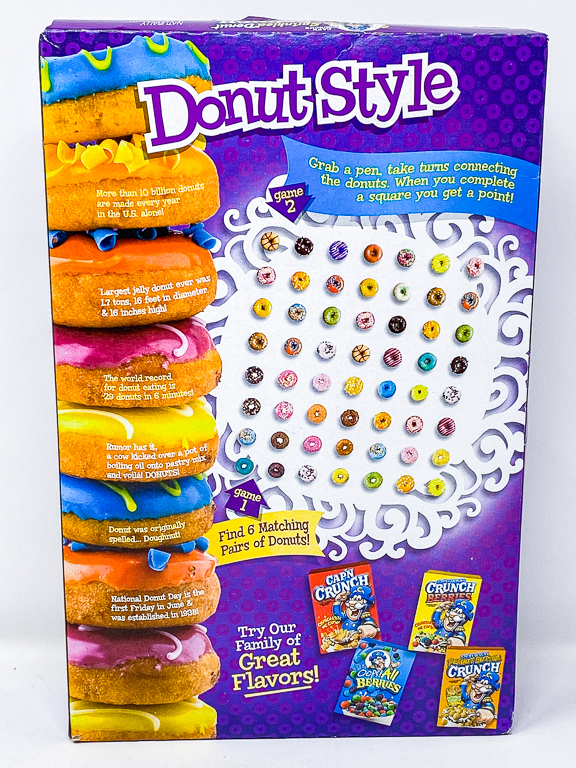 Check another flavor of Captain Crunch off that list! We're making our way through that Fleet of Flavors! 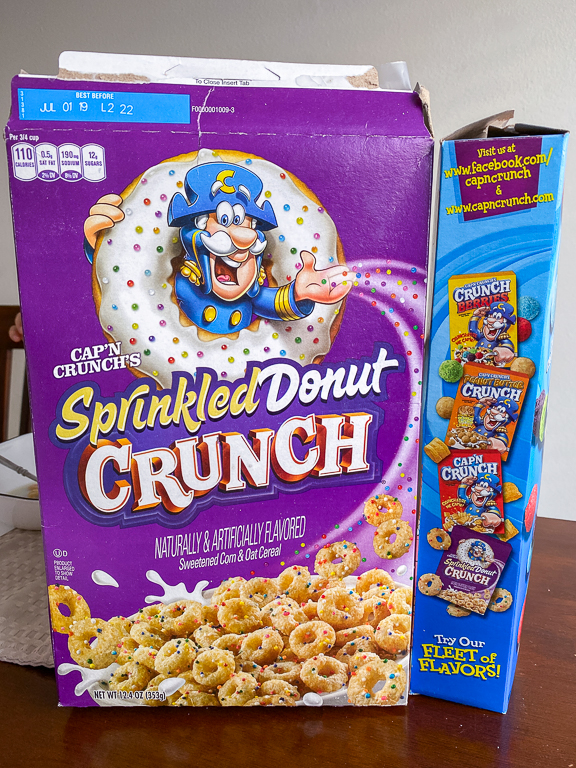