Halloween Costumes and Trick or Treating

Happy Halloween! When it came time to pick costumes this year, the kids have had a few ideas, but they kept coming back to this one. They have loved watching Phineas and Ferb all summer, but the episode/movie they've liked the most has been Phineas and Ferb the Movie: Across the 2nd Dimension (2011). In particular, they love when Dr. Doofenshmirtz meets the 2nd Dimension Heinz Doofenshmirtz. That whole song and dance number has been requested endless times as their bedtime song.

So when they decided to go as Doctor D from both dimensions, I thought that would be pretty obscure, but fun for them. If this was a regular Halloween, Alli might get recognized, but Ian probably wouldn't. But this isn't a regular Halloween, this is a Covid Halloween where trick-or-treating door-to-door isn't happening, and they only people really seeing their costumes are us. 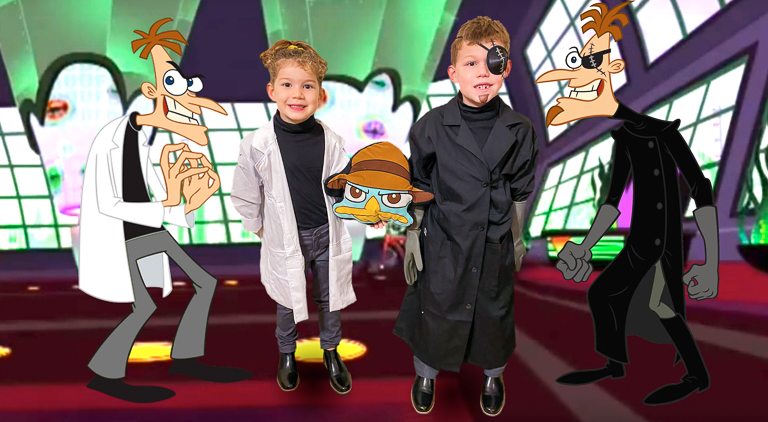 They thought it would be fun to sing their favorite song from the movie in costume too. I had them record their lines separately, then record another version of them dancing around a little, then pulled it all together into one video. I had them watch it to get their feedback and Ian's only complaint was "why do you have them (Both Dr. D's) singing too?"
More after the jump.
Stay in character Ian. Don't smile. 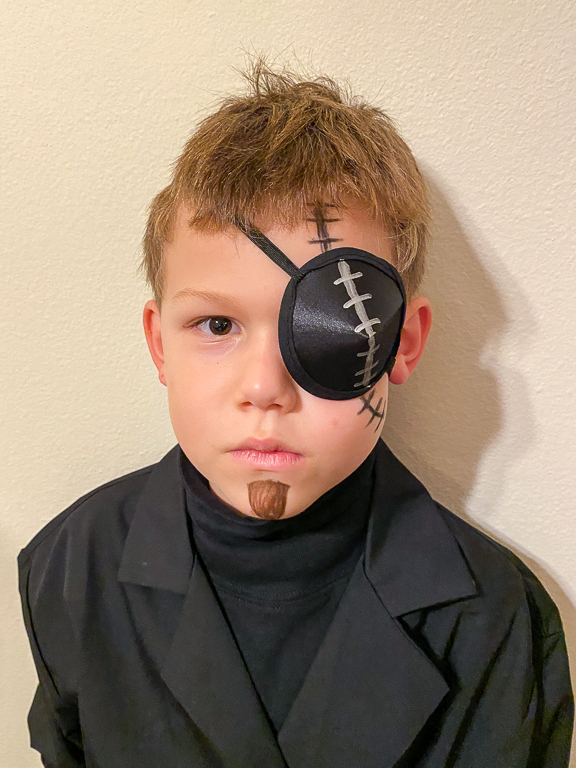 The Friday before Halloween, the kids liked attending virtual school in costume. 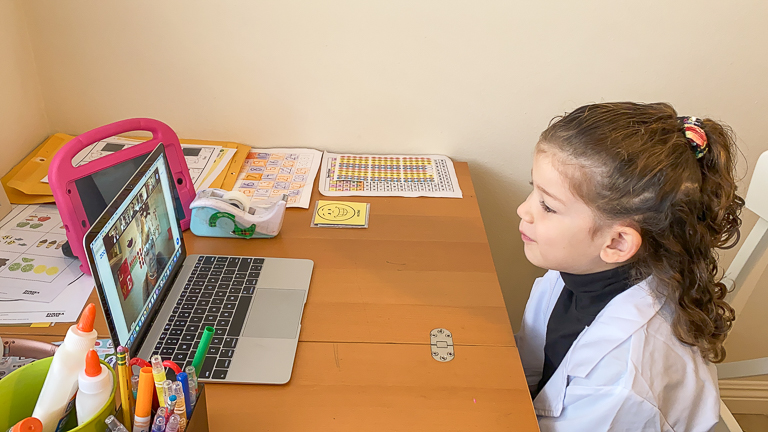 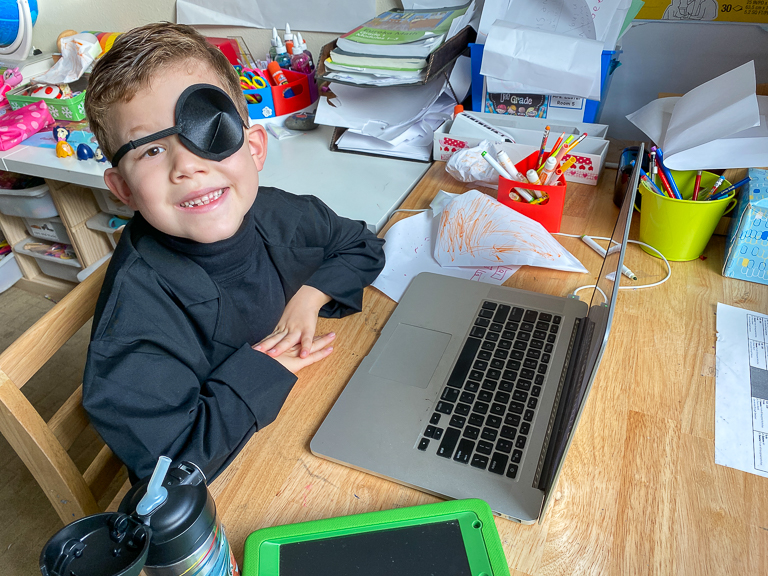 Also that Friday, there was a car parade at the school where the teachers were in the parking lot in costume. You could drive by and wave, then pick up a bag of candy. 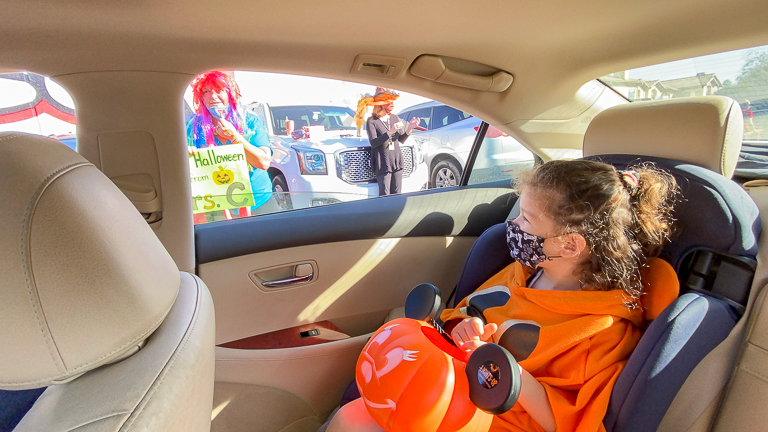 It was a pretty good mix of candy. 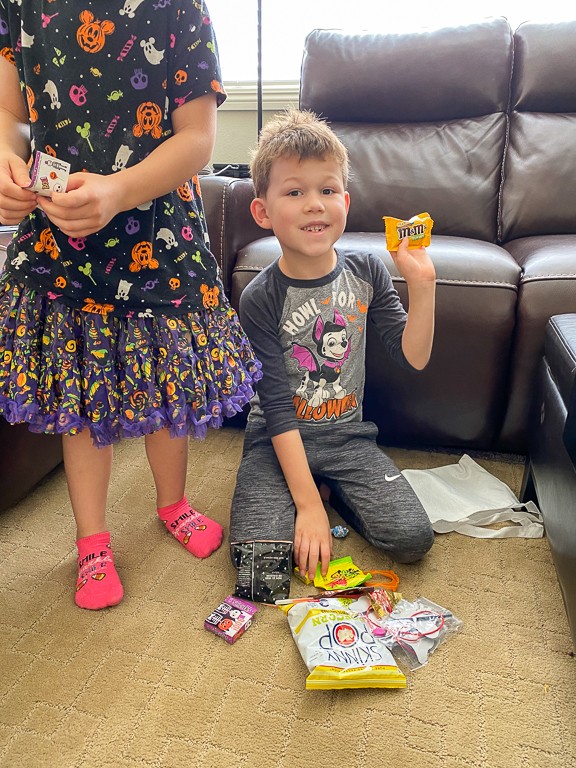 And we'll have a special post on one of these treats coming up. 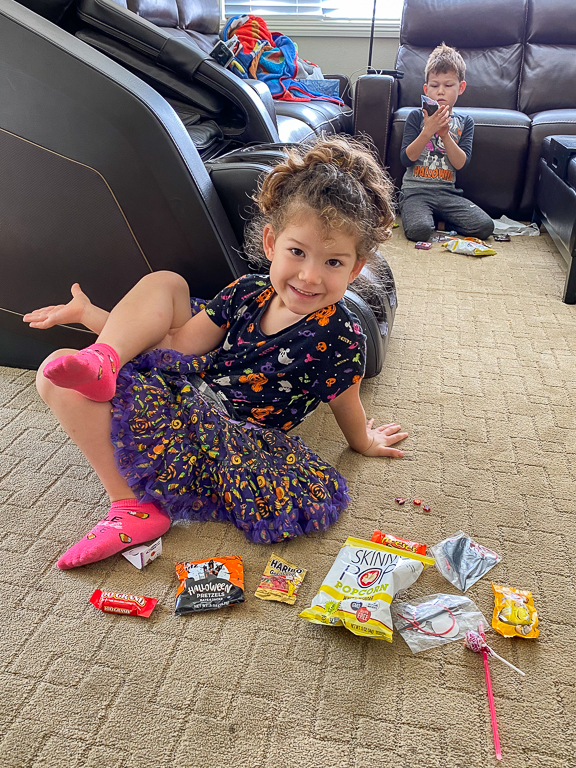 It's about time for the kids to go trick-or-treating, but first, they have made something special for us. For the adults, they made everyone pumpkin pails out of paper and tape. They colored them orange, folded them into a bag, and gave them a green handle. I love the creativity. 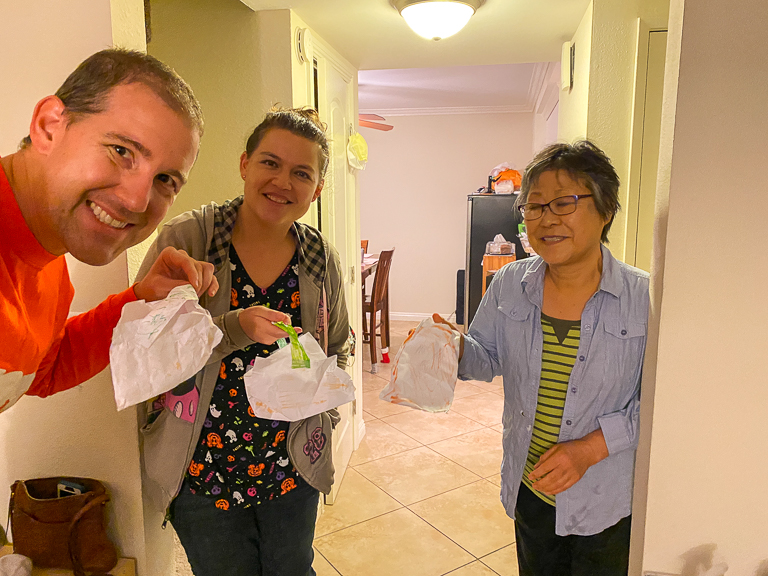 Then they ran and hid in different parts of the house and we had to find them. 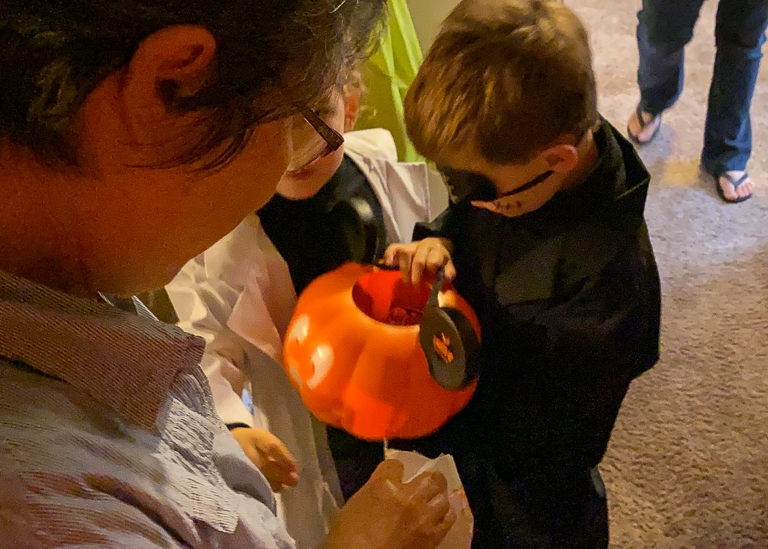 Once we did, they had special candy for us. From different trips to the store, they've acquired all our favorites, so when Grammy found them, they made sure to give her an Almond Joy. When I found them, Heath Bars. Grandpa got 100 Grand Bars, and Mommy got Reeses. Thanks guys! Very thoughtful. Time for the kids to go trick-or-treating. Again, not leaving the house, so we made due with what we had. The adults went behind different doors, the kids knocked and then got a treat. 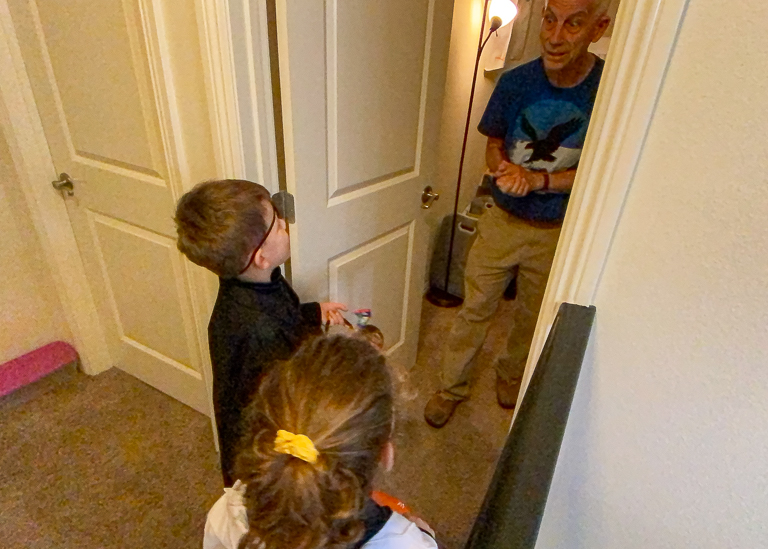 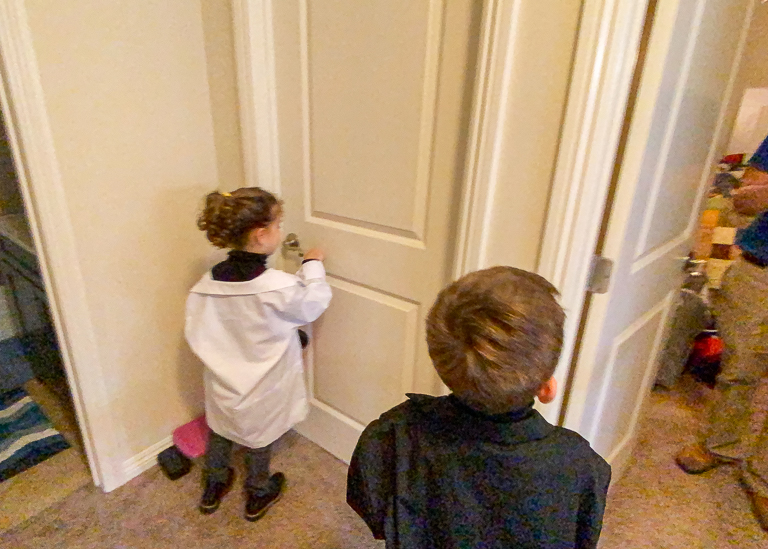 There was a little bit of candy, but Theresa did a great job by picking out glow sticks as the main give-away item tonight. 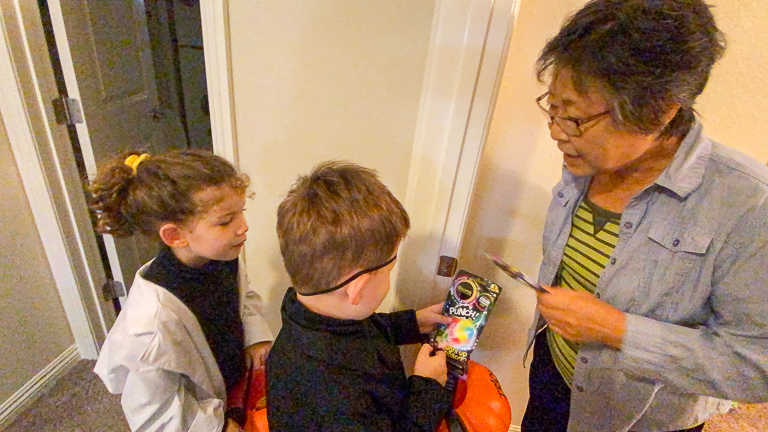 The kids got a bunch of them and really there's no reason to save them. Alli said that we should have a glow party! 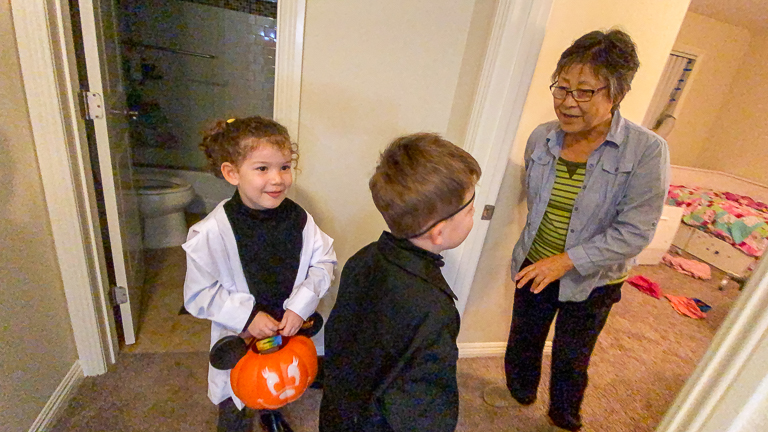 Perfect idea Alli! We turned out all the lights and played "keep the balloon in the air" with the light-up punchballs they both got. The kids loved it. Lots of laughing and giggling. 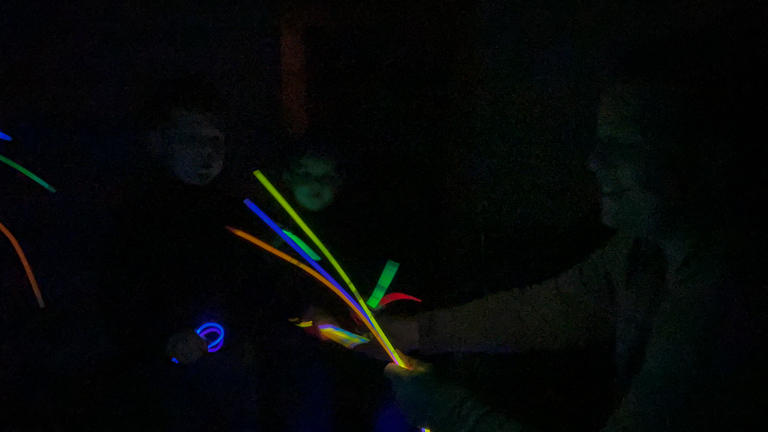 Despite staying at our house, it's been a fun and memorable Halloween! 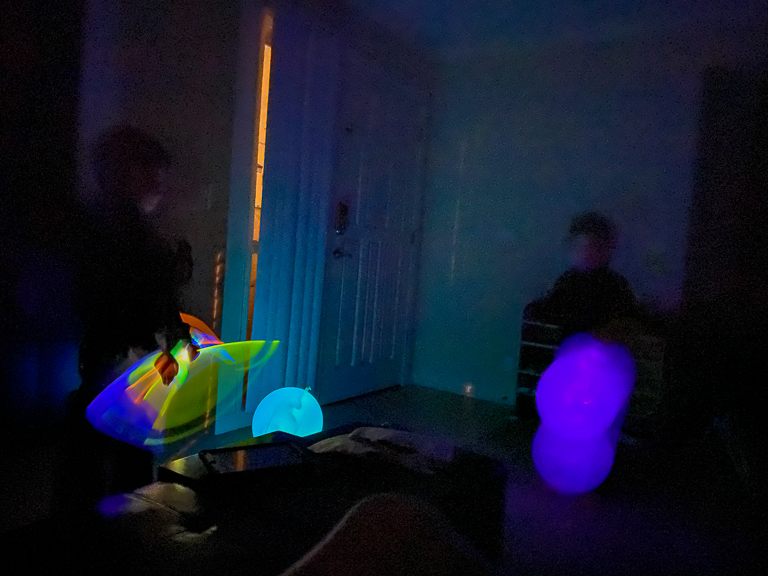