It's time for another Kids' Taste Test! Ian and Alli are always on the lookout for something they can make a taste test out of. Sometimes they get some weird ideas in their heads, but other times it's right in line with our usual taste tests.

Today's taste test is a results of having one of those giant bags of mixed Halloween candy. They saw all the different Tootsie Roll Fruit Chews and deemed them to be taste test material. 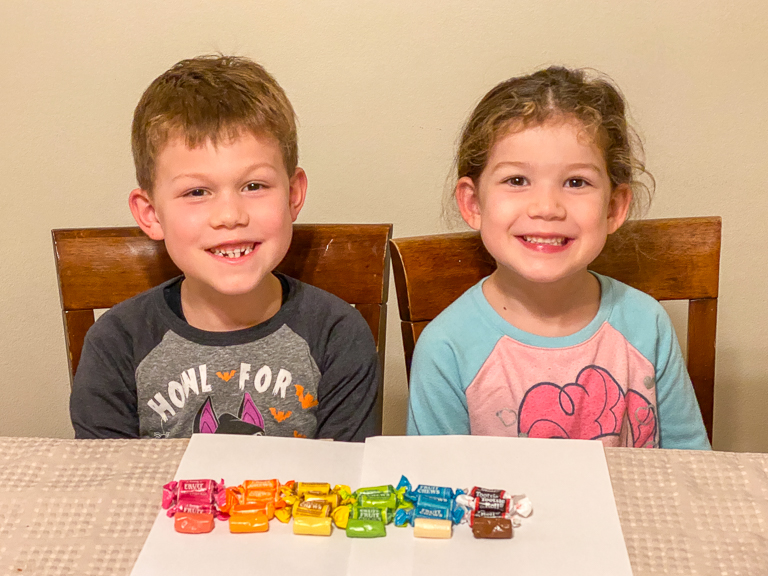 But before we get into that. What are we tasting Alli?
Alli - Tootsie Rolls
Alli is a pretty new reader, and as a new reader she's starting with phonics. Learning what each letter or letter combination says is important in sounding out whole words.
So when she sees the "oo" it makes the sound like zoo, moo, or toot. Which means we're having Toot-sie Rolls in our taste test today.
The kids went fishing in the bag for the different Tootsie Roll fruit chew flavors. 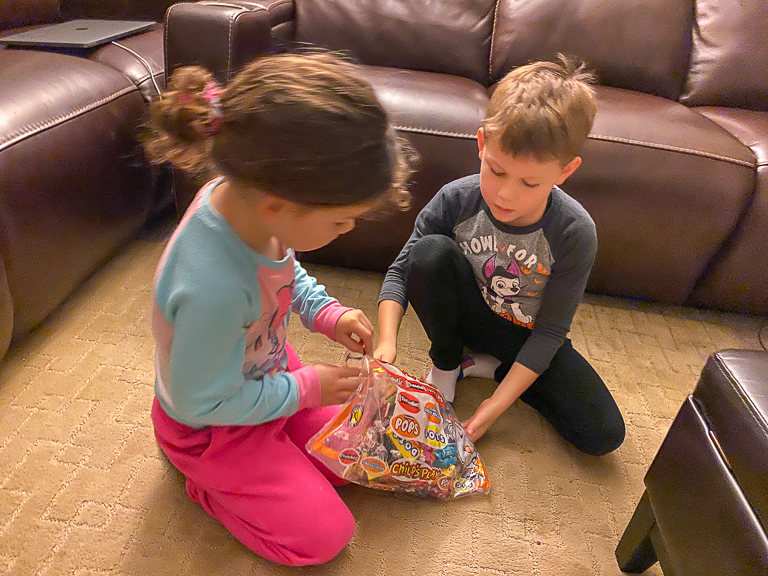 I asked them to find me 4 of each flavor. That yellow one was giving the kids some problems. Eventually they had to dump out the bag on the hopes of finding that 4th yellow. 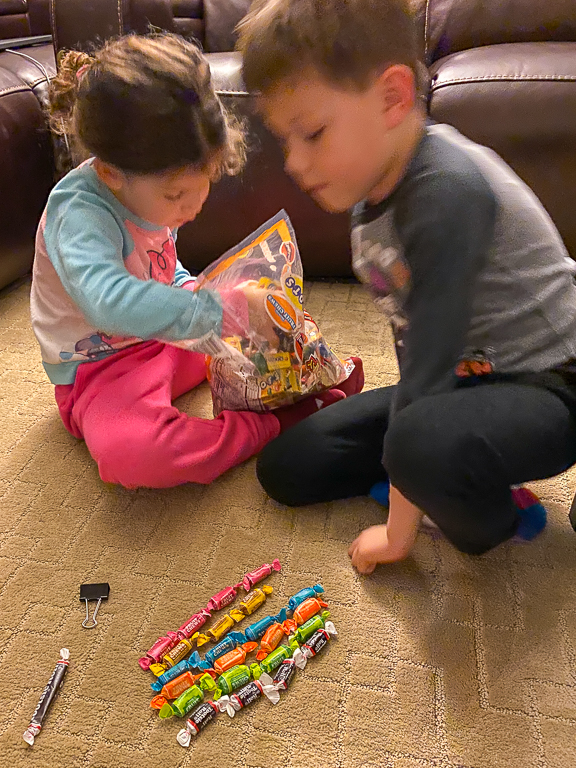 Success! They found it, Time to go take pictures. You guys are in charge of the setup and the pictures.
I asked how they wanted to set it up, and they chose a rainbow pattern. Red, Orange, Yellow, Green, Blue, and Black. 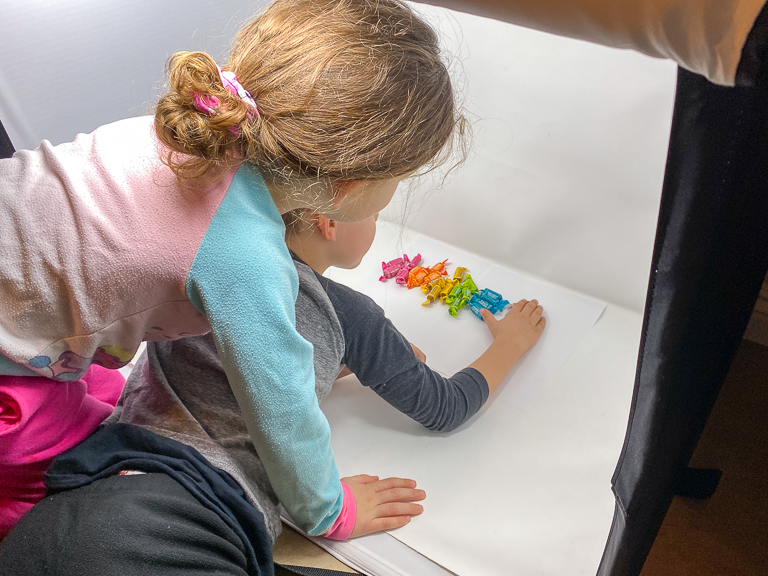 Kids are in charge. Alli, you're first up. She cycled through zooming in and out. 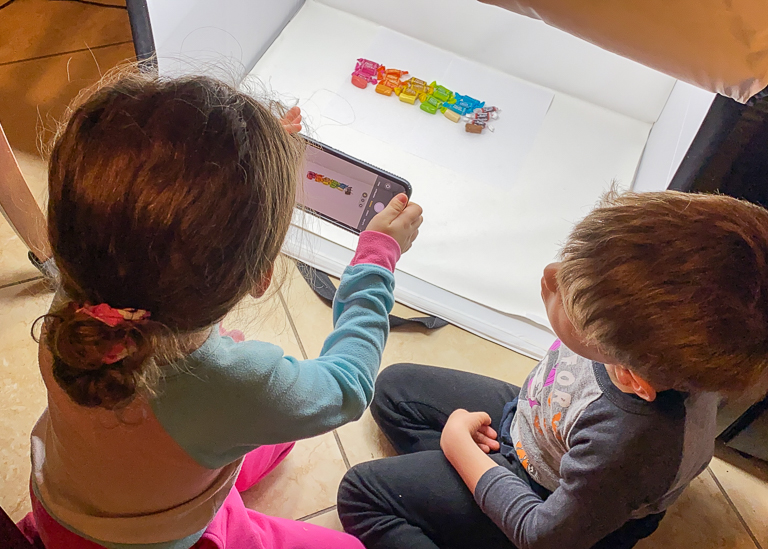 Nice one Alli.
Our Tootsie Roll Fruit Chews flavors today are:
Cherry, Orange, Lemon, Lime, and Vanilla. I looked it up, yes, Vanilla is a fruit.
And do you know what else is a fruit? Chocolate. It's the seed of a fruit, but I'm still saying it's a fruit.

Alright, Ian, you're up. 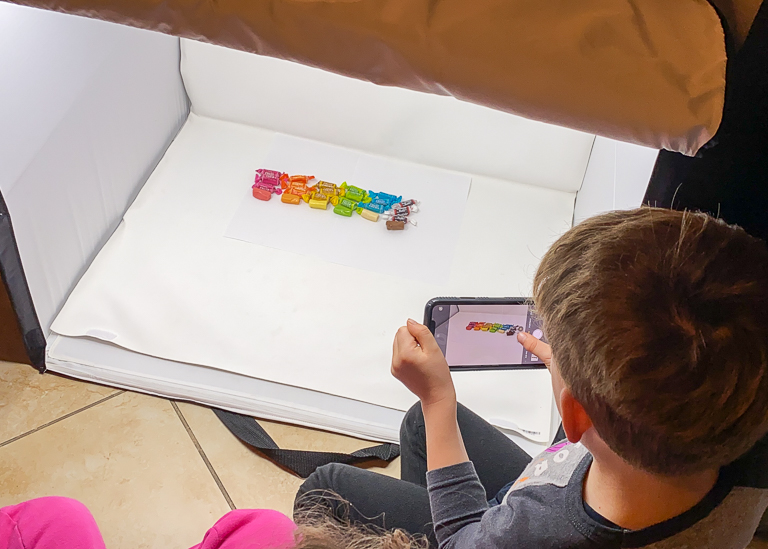 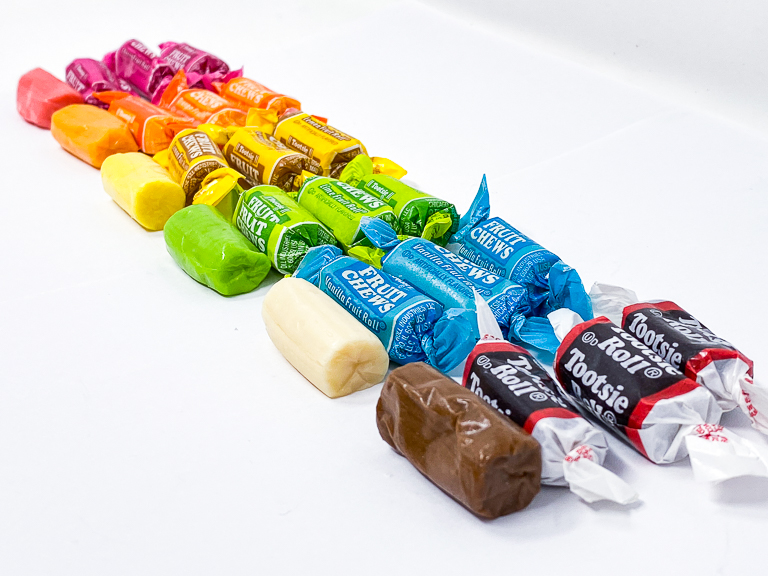 Alright, now it's time to taste test all these. We're going in reverse rainbow order now and starting with the original Chocolate Tootsie Roll. One other thing I appreciated was that these were all fresh candies, and as such soft and chewy. I'm sure you've had an old Tootsie Roll that is really hard to bite. These weren't that. 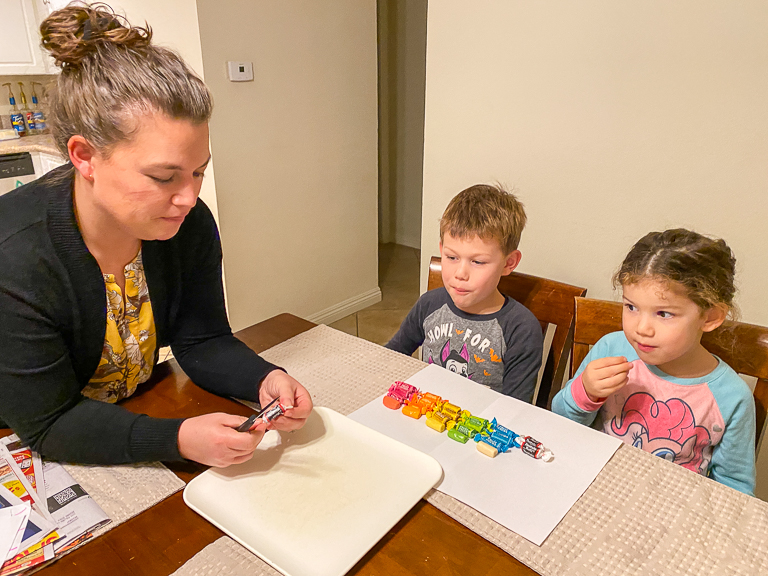 The original Tootsie Roll was created in 1907 and is considered to be a cross between a taffy and a caramel. It's that classic flavor that I'm sure everyone has tried before. It's not a rich chocolatey flavor, but instead, just a light chocolate flavor. 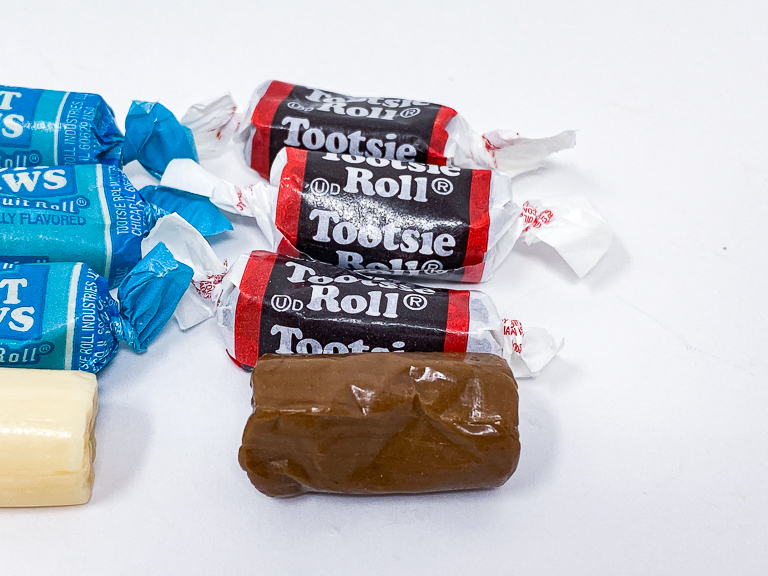 Next up is the Vanilla Fruit Roll. Hmm. Yes, I taste the vanilla. 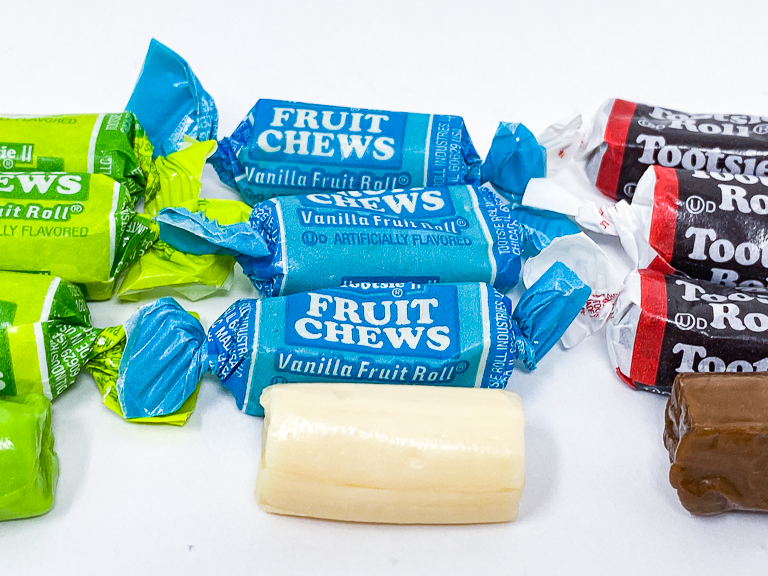 Ian said it tasted like a Root Beer. When we talked about it a little further, he changed that to be a Cream Soda. Yes, I can definitely see that. It's got a Sweet Vanilla flavor, and it's a little creamy like a Cream Soda. 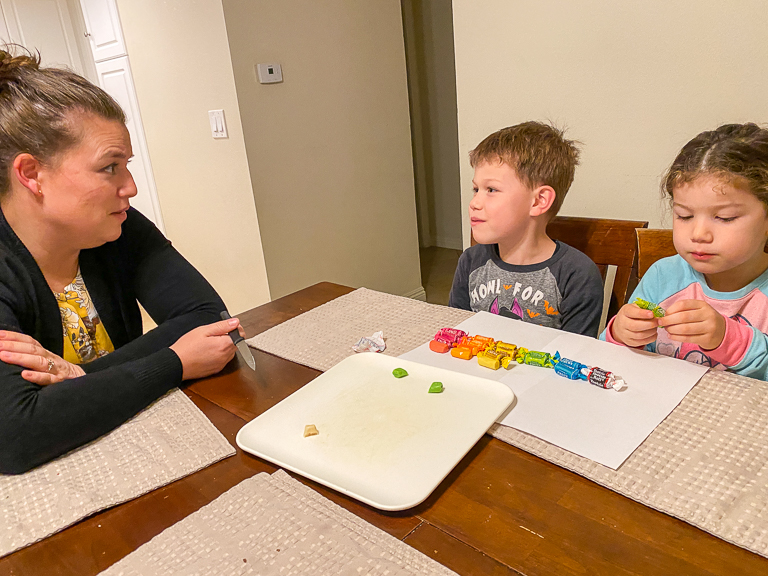 Next is the Lime Fruit Roll. This flavor packs a punch! I'm reminded of a lemon-lime soda, but the flavor is more intense. 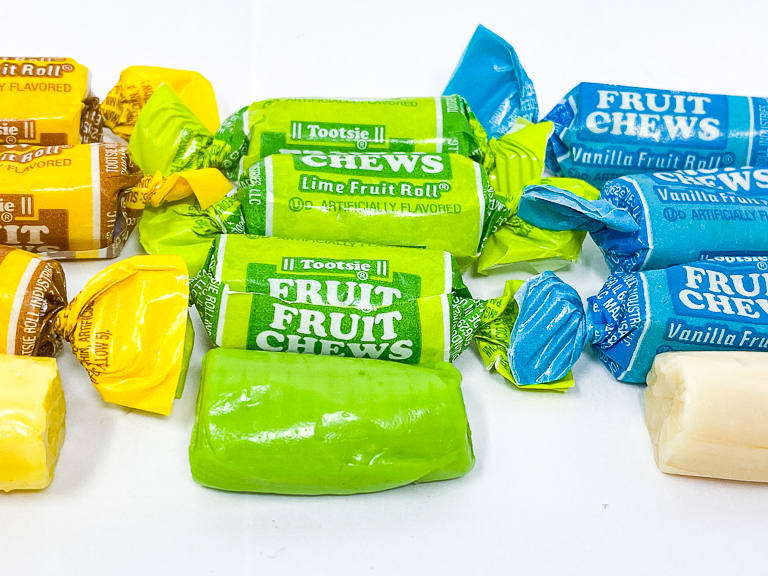 Next is the Lemon. After the Lime, I was expecting big things! 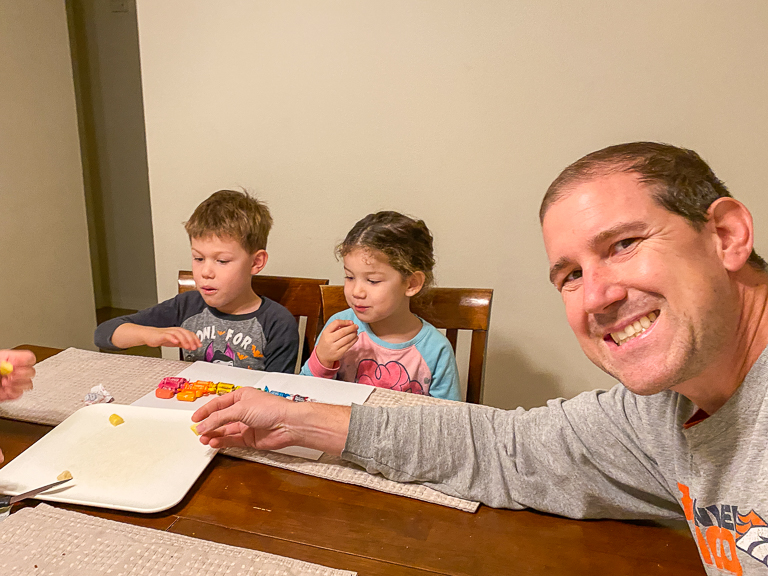 But after smelling it and tasting it, where is the flavor? 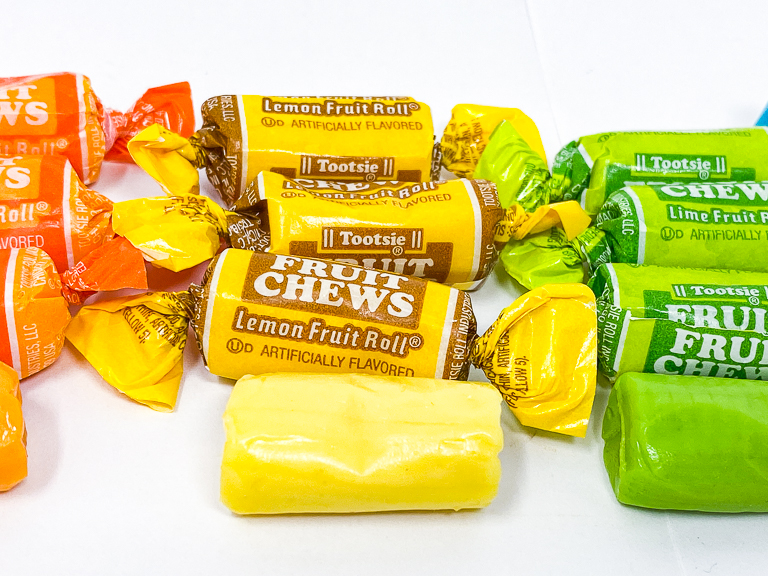 Alli said it was like a Sour Patch Kid with no sour. Theresa debated just spitting it out. 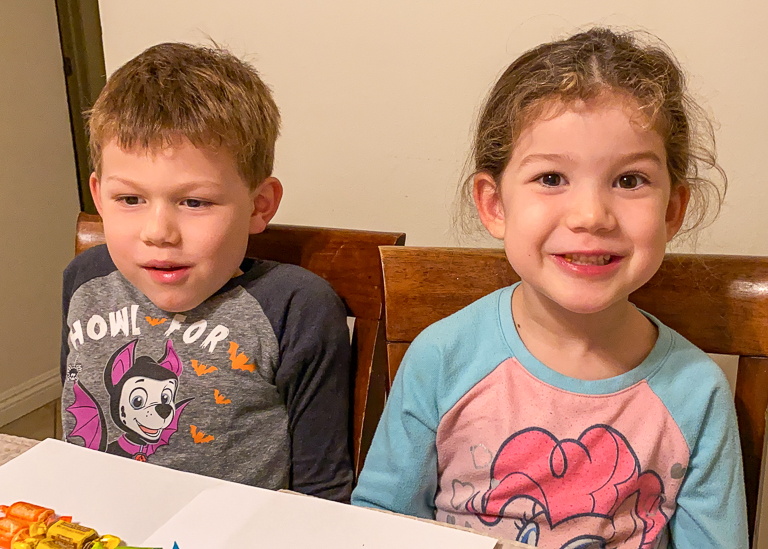 Next we'll move on to the Orange Fruit Roll. If you close your eyes, you'd almost think you were eating a Starburst Orange chew. 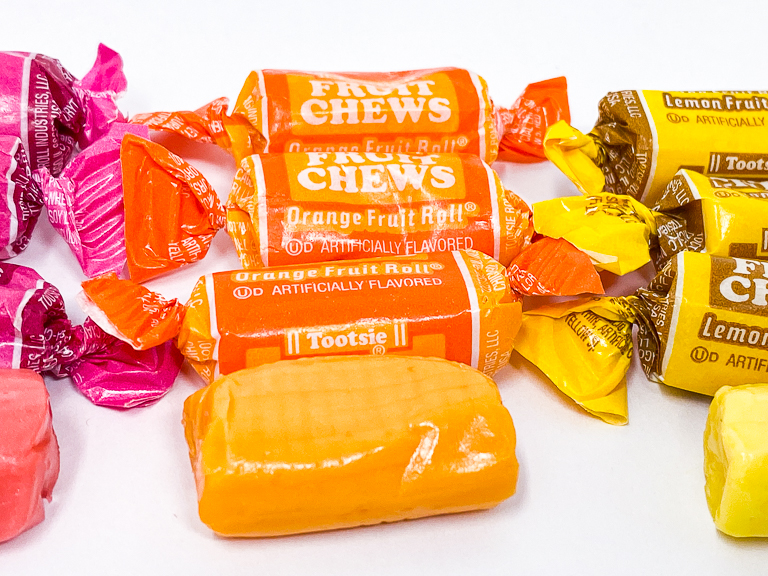 And the same thing goes for the Cherry Fruit Roll. It tastes a lot like Starburst Cherry. 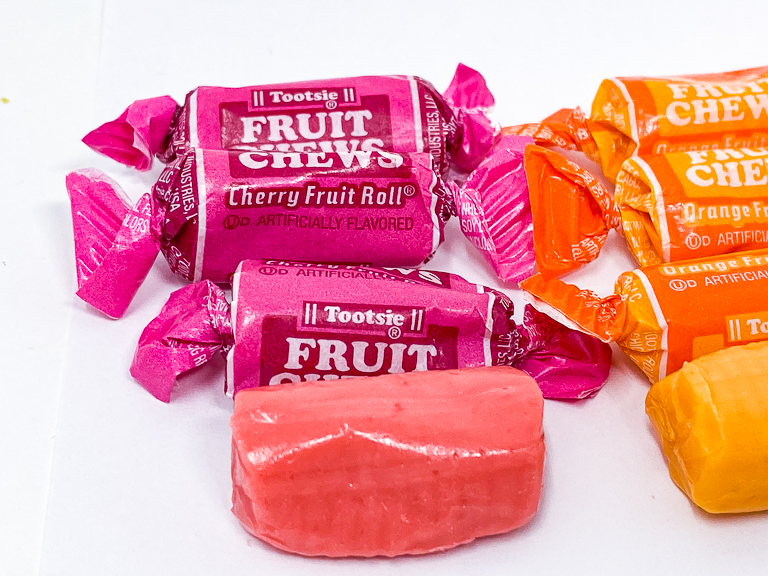 Time to make our picks. First we're going to pick our least favorite. The votes are in and it's 3 votes for Lemon and 1 vote for Vanilla.
And our votes for the winners are... Chocolate for Theresa and Alli, Cherry for Ian, and Lime for me.
I had to tell Alli that this was a picture and not a video, otherwise she was going to point to all 6 of them. 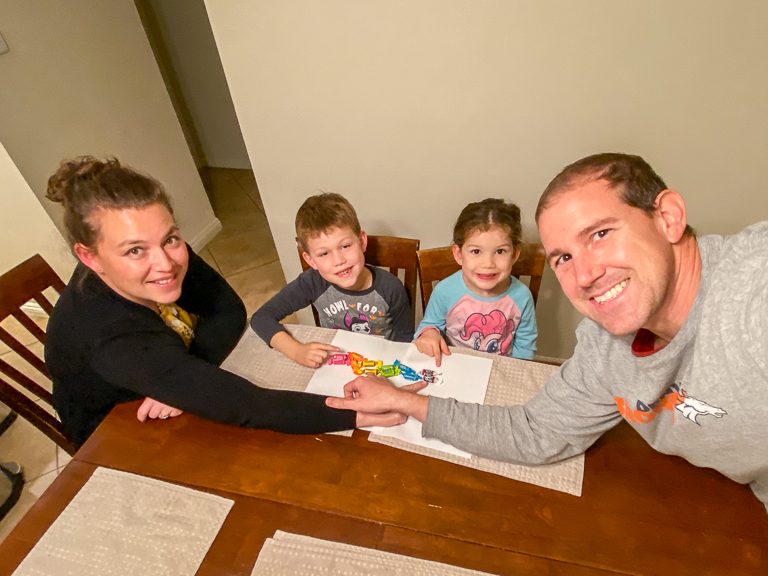