Today we're getting to try the brand new Kelloggs Froot Loops Ice Pops! We saw them at the Dollar Tree and knew we'd have to try them. 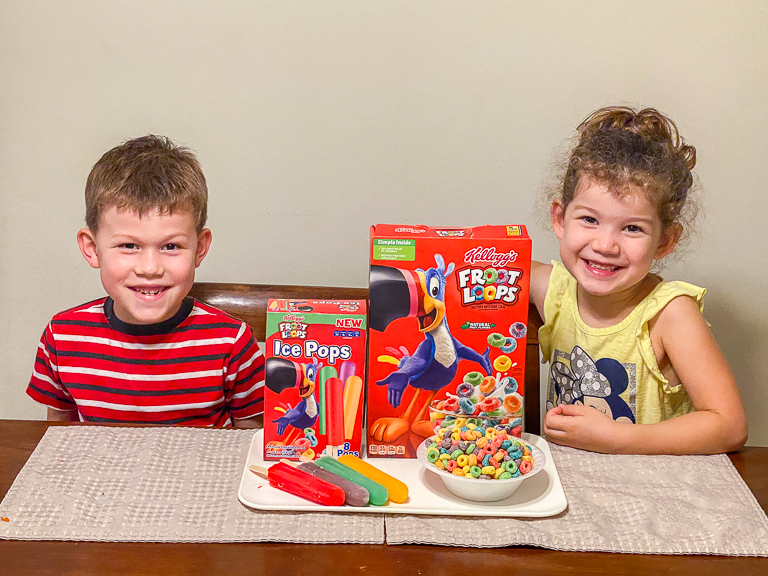 The regular Froot Loops cereal has 6 colors, so I was a little disappointed to see only 4 colors represented here. The box shows red, purple, green, and orange. These pops are red, purple, and orange, but that green pop looks off. A little too much blue. 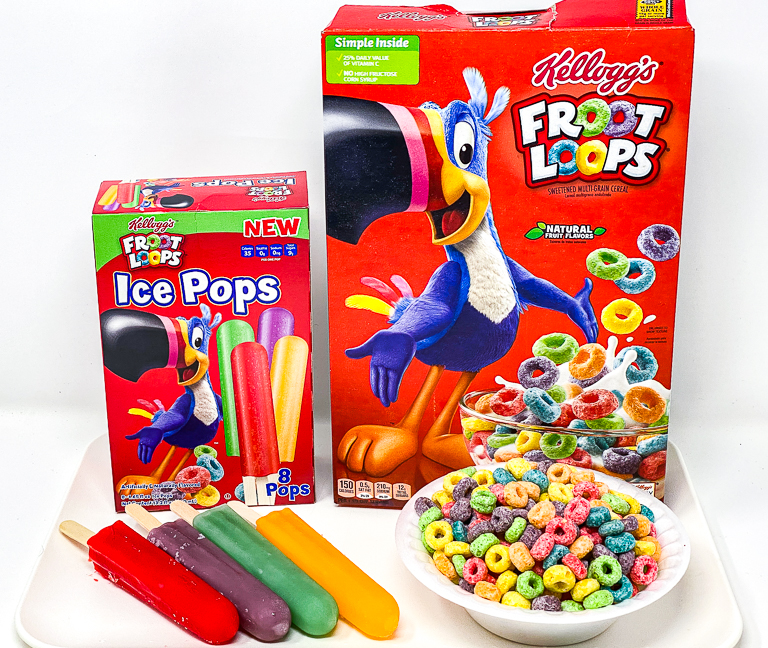 There are 8 Ice Pops in each pack. They are somewhat individually wrapped. The plastic on one is fused to the plastic on its neighbor, so you couldn't just pull it apart and have two wrapped pops. I used scissors to cut the side off each package and pull the ice pops out that way. 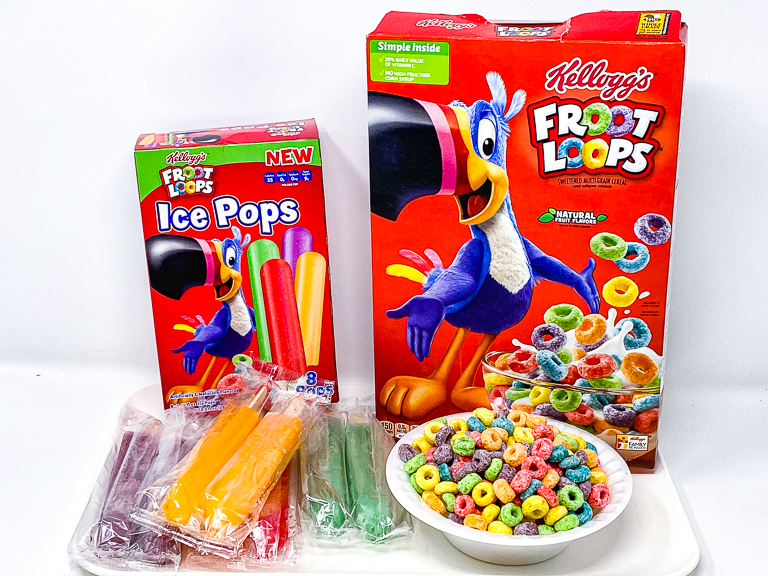 The colors do look bright. I wonder how they'll taste. I know the cereal is all the same flavor, despite having different colors. I wonder if the pops will follow the traditional red (cherry), purple (grape), green (lime), and orange (orange). 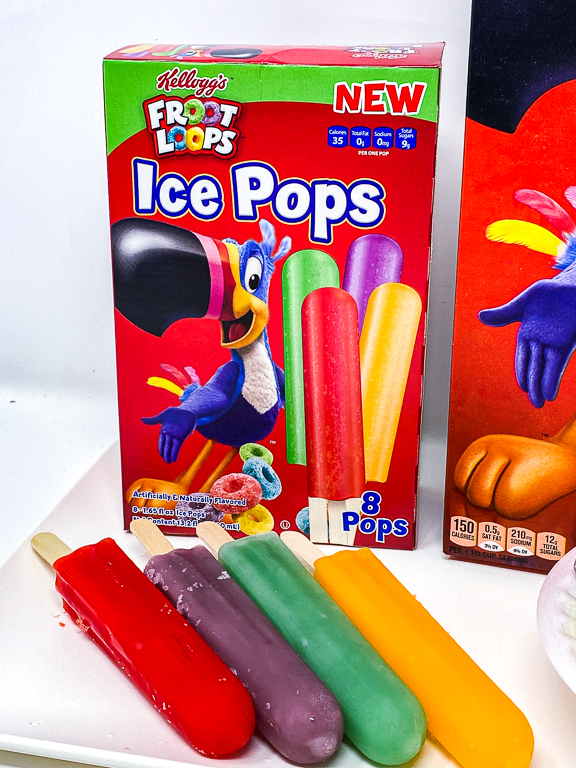 The side of the box is no help either, promising only Natural & Artificial flavors. 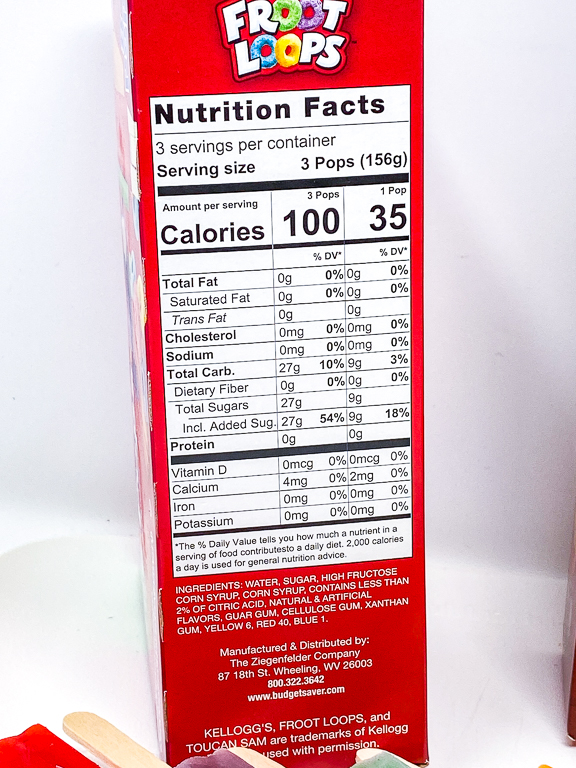 Comparing the Ice Pops to their Cereal Loop counterparts. Blue and Yellow are unrepresented, sadly. 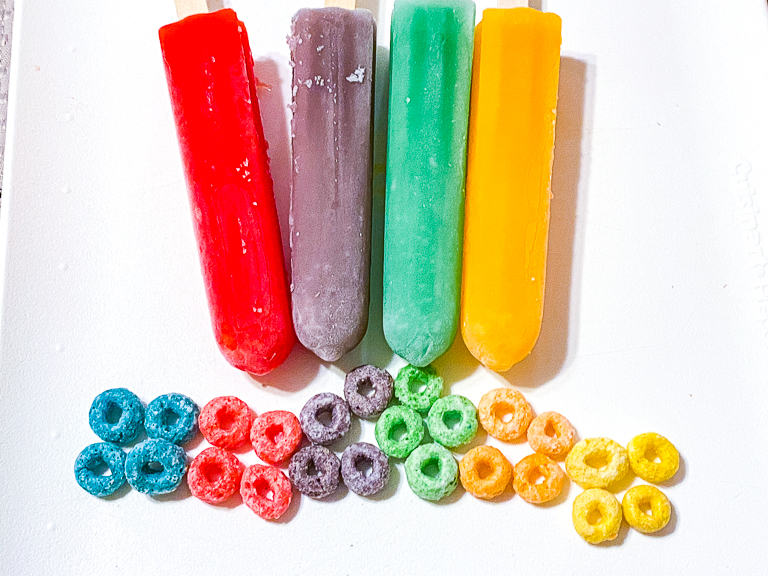 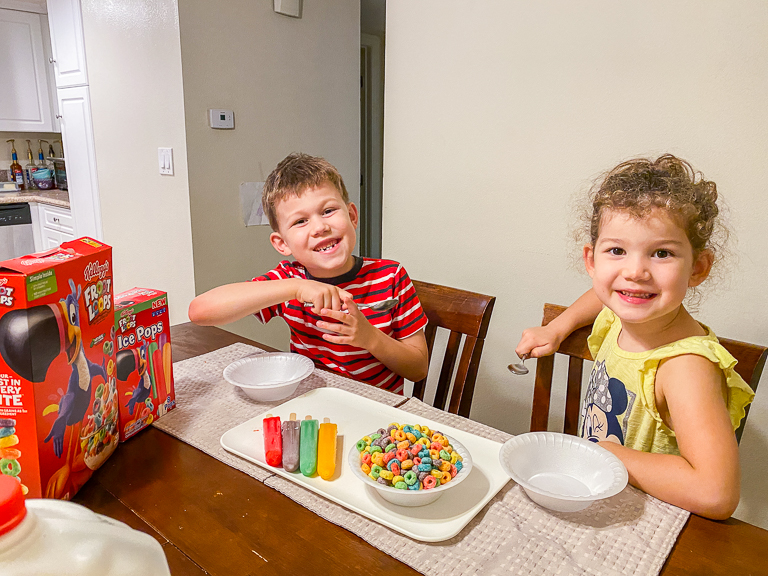 First we're going with the cereal. A little cereal and a little milk, it's a treat. Froot Loops cereal is tasty. 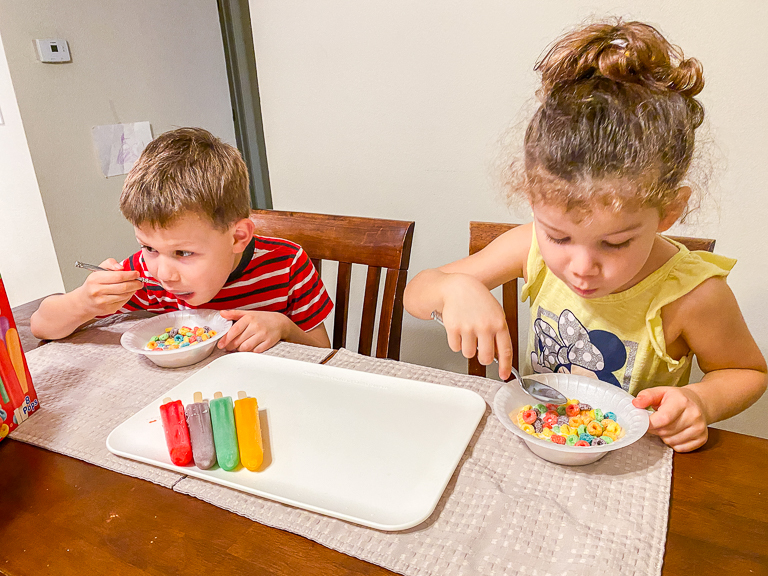 I grabbed a knife and started cutting up a few of the ice pops.
First we started with the orange pop. The flavor is... artificial? I didn't like it. I can't tell if they're going for an orange flavor and just got the mix wrong or what, but this is not like any ice pop I've had before. 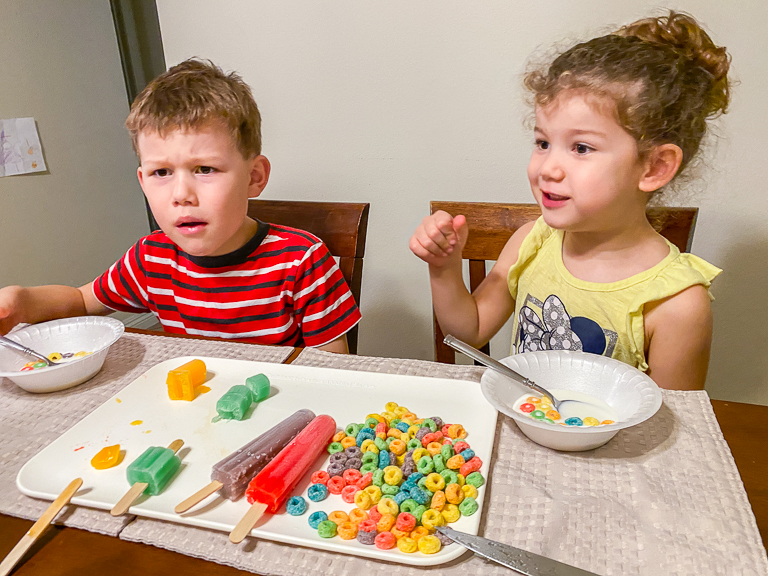 Ian shows his like or dislike very clearly on his face. It's a no from him. Alli is not a picky eater. She thinks the orange one tastes just fine.
Alright then, let's move on to the green(ish) one. And it tastes like... the exact same flavor as the orange colored one. Are these just different colors and all the same flavor?
I think it was at this point that Alli identified what she was tasting.
Alli - It tastes like ginger.
You know what. I think you're exactly right. That's the odd flavor I'm picking up from these pops. 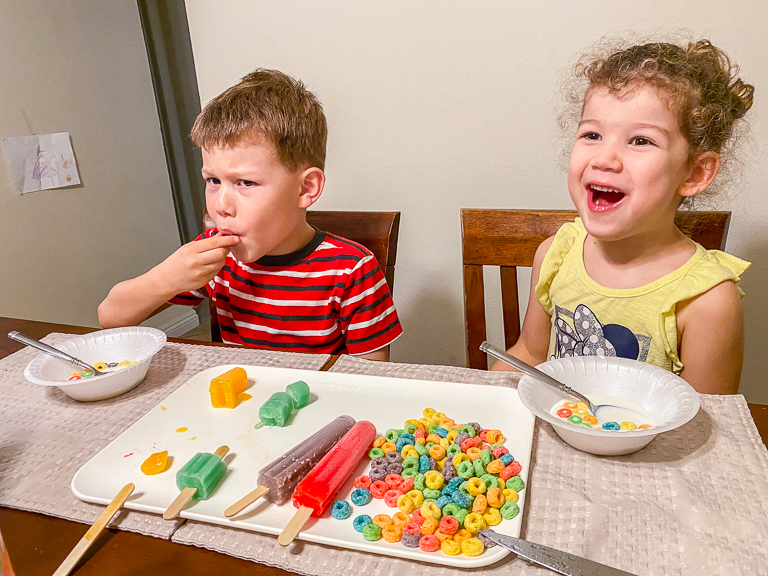 Will the purple be any different? Let's check with Ian.
Um, no. The purple taste the same. These are ginger pops. 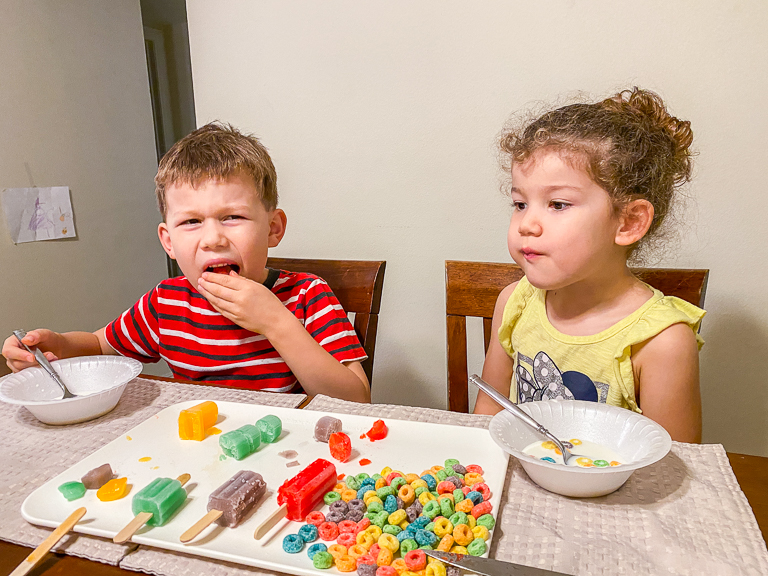 Same thing with the red ones. All of these have the same flavor. Alli gets a kick out of how much Ian doesn't like them. 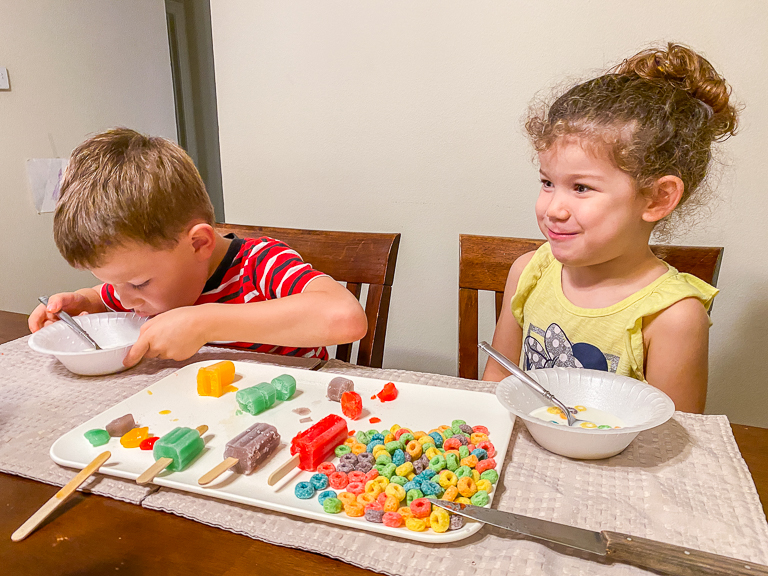 Time to vote. Ian gives these a big 10 thumbs down. Alli gives them 10 thumbs up. When questioned, she said they're just as good as the Sour Patch Kids Watermelon Ice Pops we bought at the same time, which everyone loved. 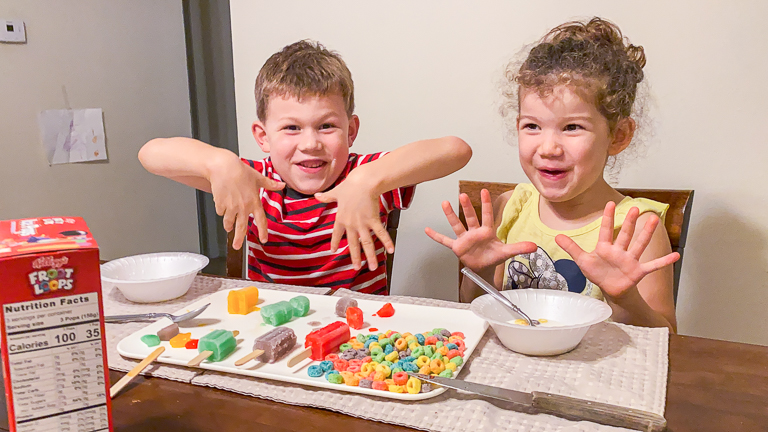 Hey Mommy, you've got to give these a try. Upon smelling them, she agreed with Alli that these smelled like ginger, and after taking a nimble also agreed that these taste like ginger too. She's not a fan. Rich and Chi tried it too with mixed results. They didn't love it, but didn't hate it either.

Ian is eyeballing Alli, going in for another piece of ice pop. 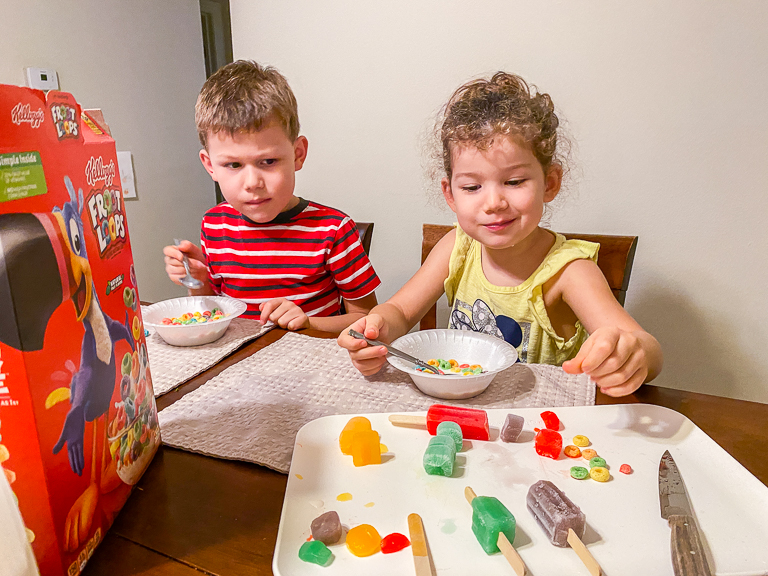 How about some more cereal to get that flavor out of our mouths. 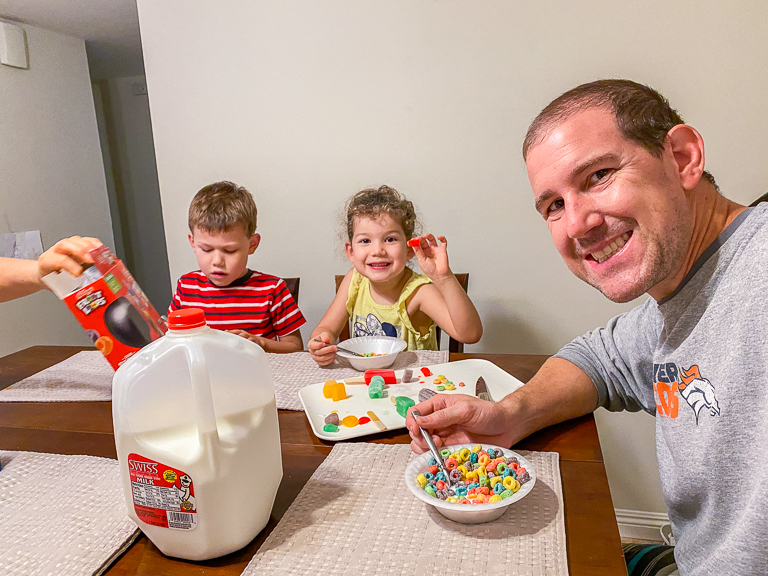 One of the few taste tests where there's lots of leftovers on the plate when we're all done. In the end, I guess it didn't matter that they didn't have all 6 colors. They all tasted the same anyway, so why even bother. 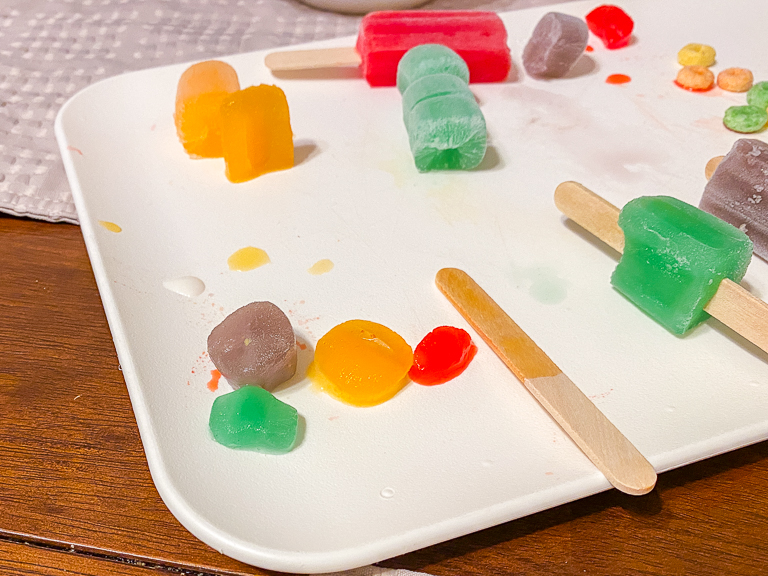 Despite how it tasted, we had some good laughs.
Posted by Joe at 6:00 PM