Thanksgiving is over, but why did we even bother making food in the first place? Brach's has us covered! In one bag of Candy Corn, they've provided an entire Turkey Dinner!

Despite my searching high and low for these here in Southern California, my brother had to ship me a bag from Colorado. 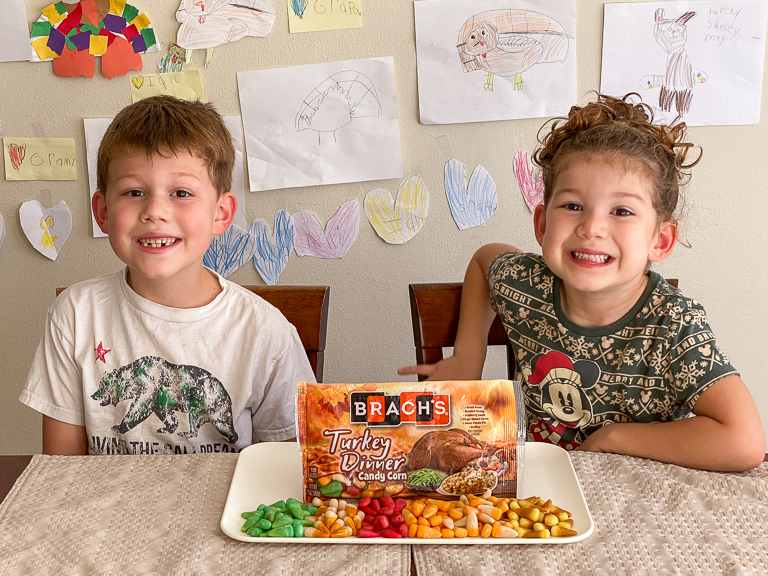 Who is ready to dig into this bountiful feast! There's 6 different flavors for us to try! 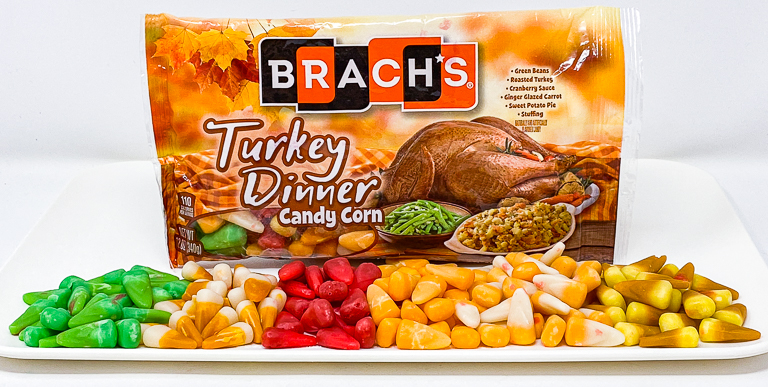 There's Green Beans, Roasted Turkey, Cranberry Sauce, Ginger Glazed Carrot, Sweet Potato Pie, and Stuffing (or Dressing, depending on where you're from). 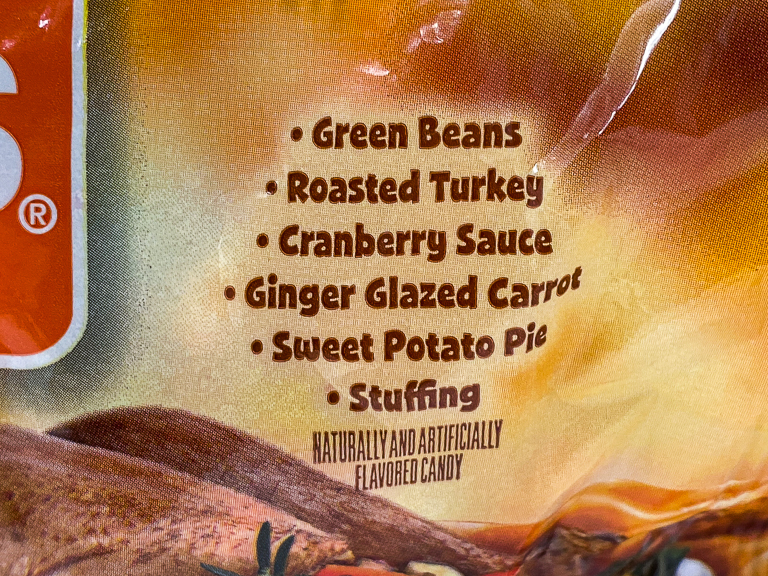 "Taste the joy of everyday moments with our rich variety of deliciously crafted confections. Share a little, or a lot, and make your memories sweeter."
The ingredient list isn't much help for determining what these will taste like. The only things that stand out are Salt, Natural and Artificial Flavors, and Sesame Oil. 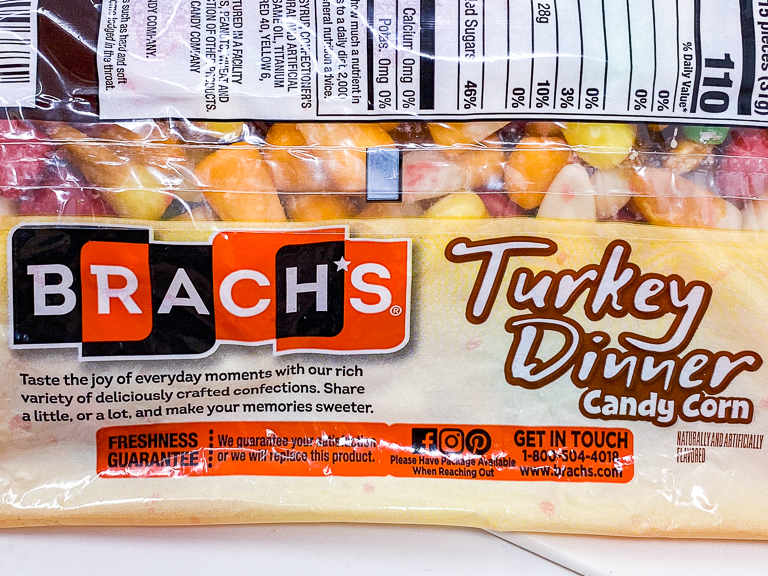 Cutting a slit in the bag and getting a big whiff. Oh my. 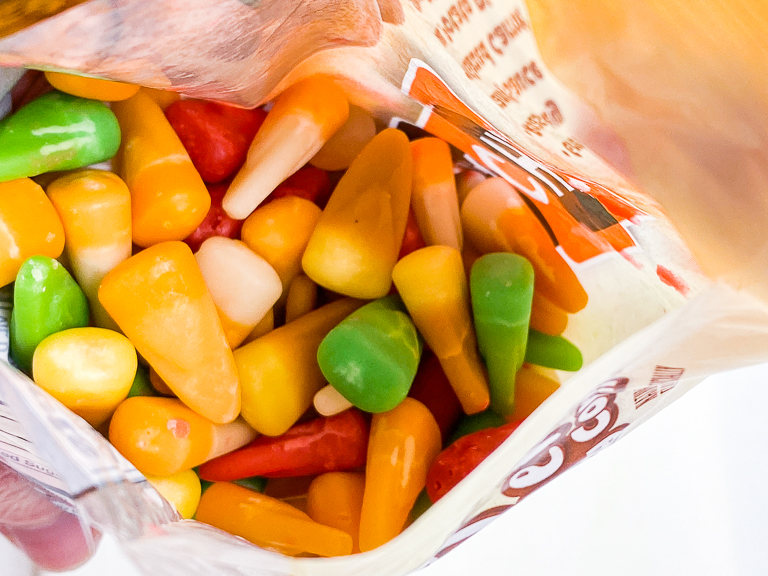 Theresa, you've got to come smell this.
You know, some things are just hard to describe. I think pictures are better at expressing the feelings. 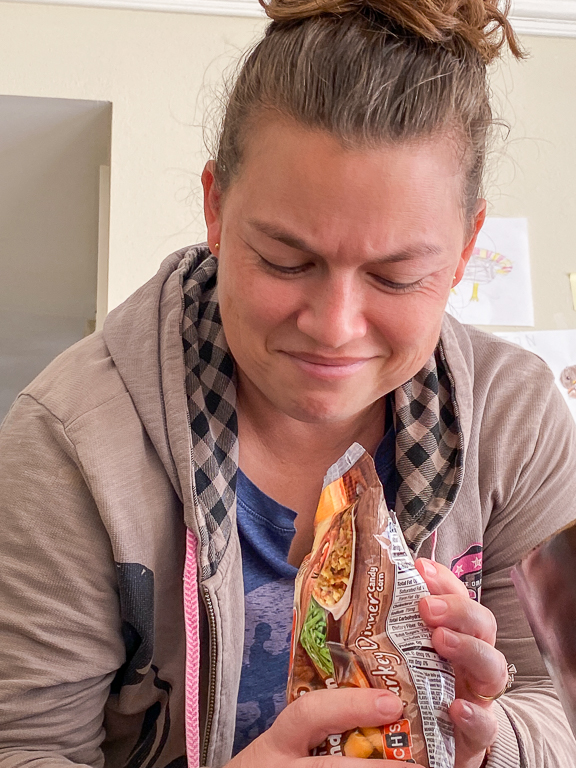 There's no decoder for what is what. These all have the same general smell right out of the bag, so that's not too helpful. They're coated with a Shellac according the in ingredient list, so that's likely masking the inside smell. I sorted everything by color and I think I have an idea of what colors I might pick for each of these. We'll go forward with it and see if I'm right. 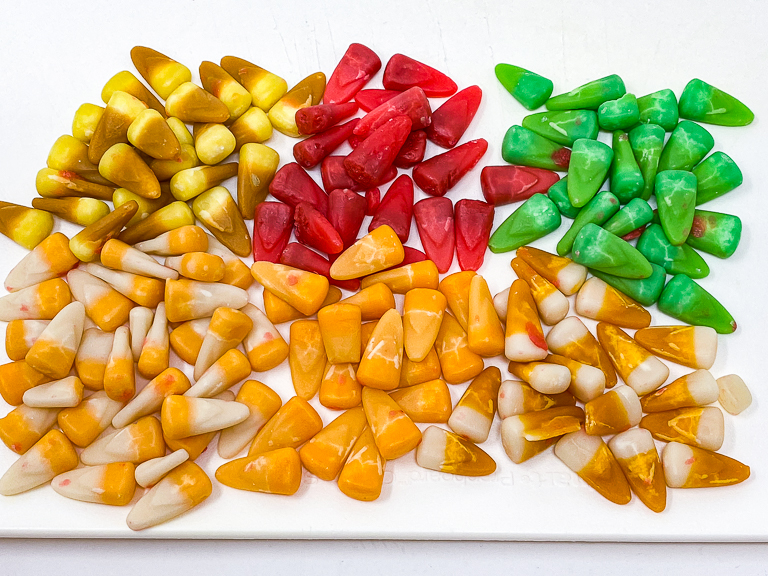 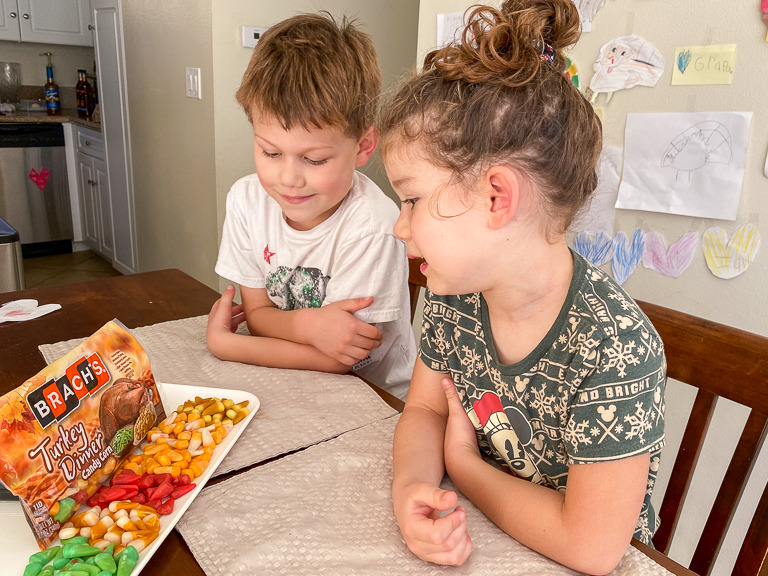 I'm under no such delusions. I have a strong feeling these are going to be like the Jelly Belly Bertie Botts Every Flavor Beans. You know they're going to be bad, but you go ahead and eat them anyway.
Nothing to it, but to do it. Let's get started! 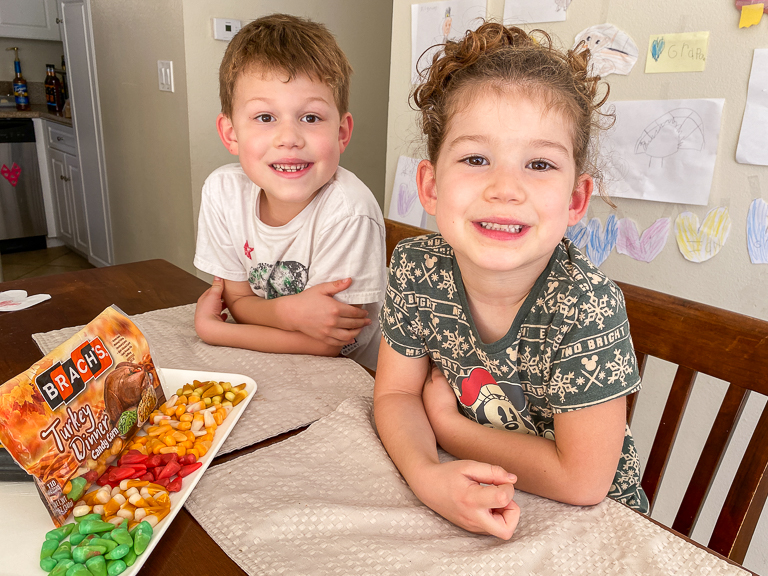 We're going to attempt to try them in the same order as the packaging lists, which means our first candies are Green Beans.
Oh man... How did they even get this flavor? It tastes bitter and green, and is in no way tasty. It's still got sugar in it, but eww, this is terrible. We're one flavor in and both Theresa and Ian have visited the trash can to spit it out. Alli gets such a kick out of it. 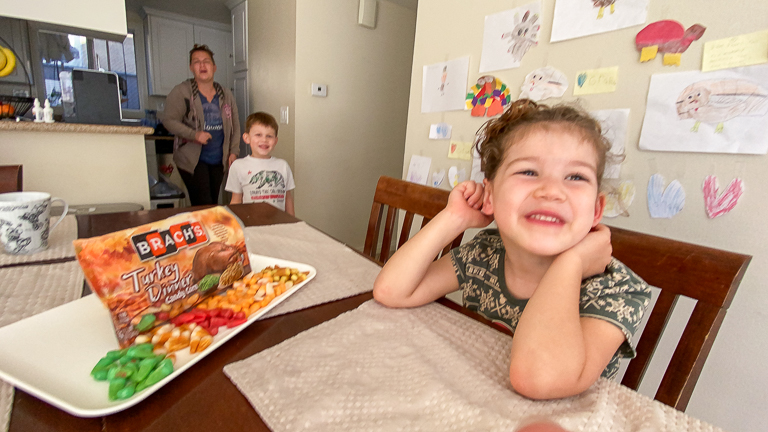 Roast Turkey is brown and white, perhaps for the turkey skin and the white meat?
Chewing one up. Wow, that does taste like turkey gravy. It's certainly not good, but it definitely taste like gravy. 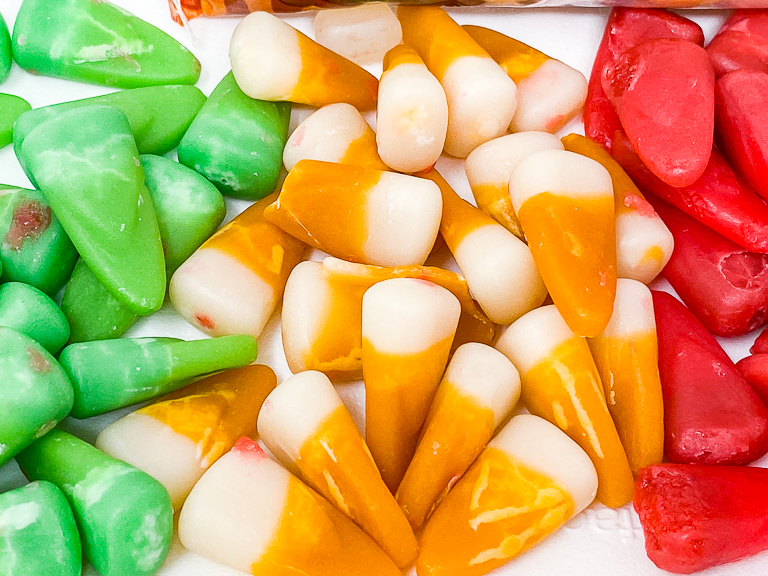 If anything is going to be good, it's the Cranberry Sauce flavored candy corn. And sure enough, it's alright. I'm not going to say that it's cranberries, but it's sweet, not bitter, and has a pleasant overall taste. 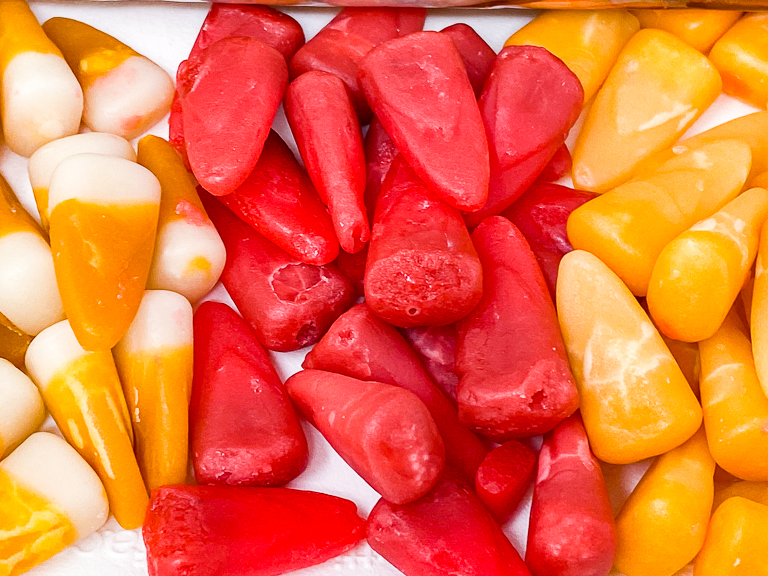 Ginger Glazed Carrot is next, with an orange base and a lighter orange top. Well the ginger is certainly coming through. Very strongly. If there's carrot flavored anything in here, it's subtle. 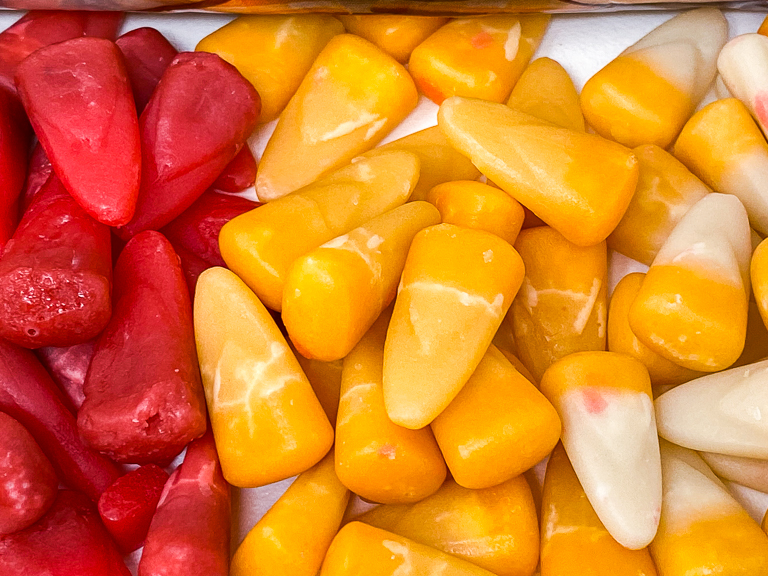 The expressions people are making during this taste test are just the best! 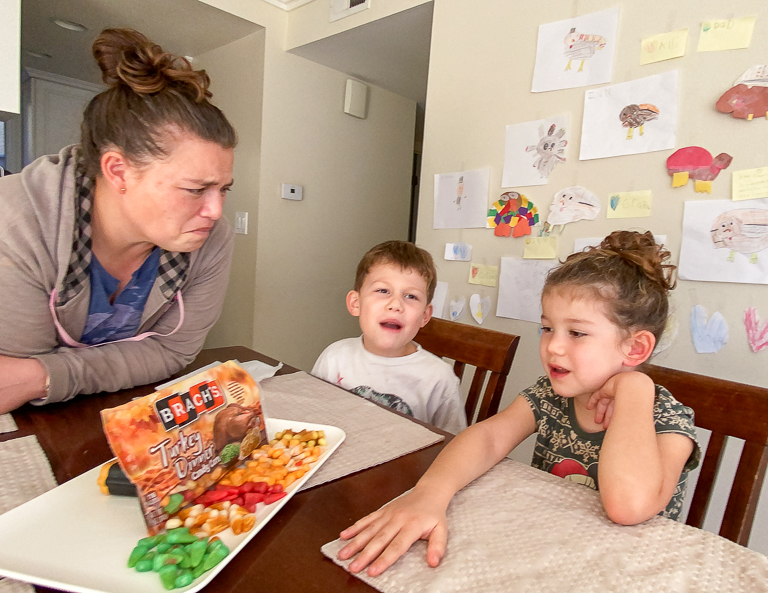 Sweet Potato Pie is the appropriate color, with orange for the sweet potatoes on the bottom, and white for the whipped cream on top. These ones, actually aren't bad. I'm getting a light cinnamon flavor to it. 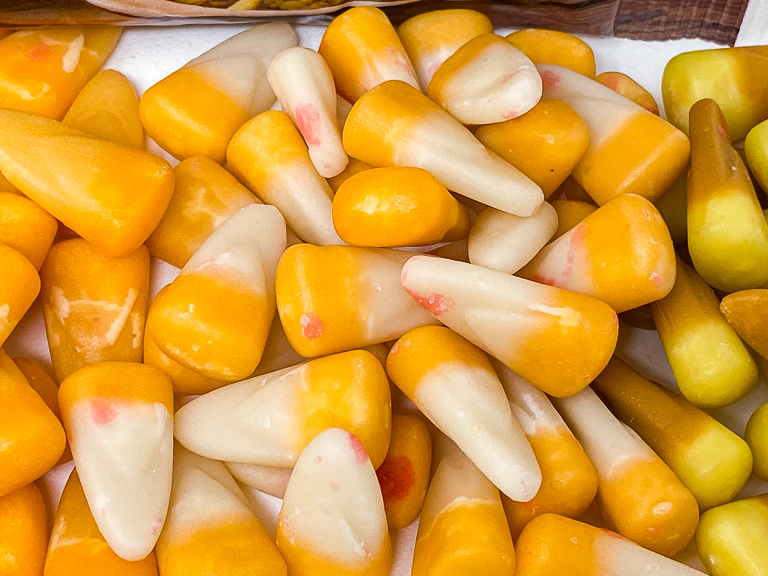 Last is the Stuffing. I did a pretty good job guessing which was which. These have a powerful taste. The sage is present, but there's an overwhelming flavor of something else that we are all hating. Bleh! 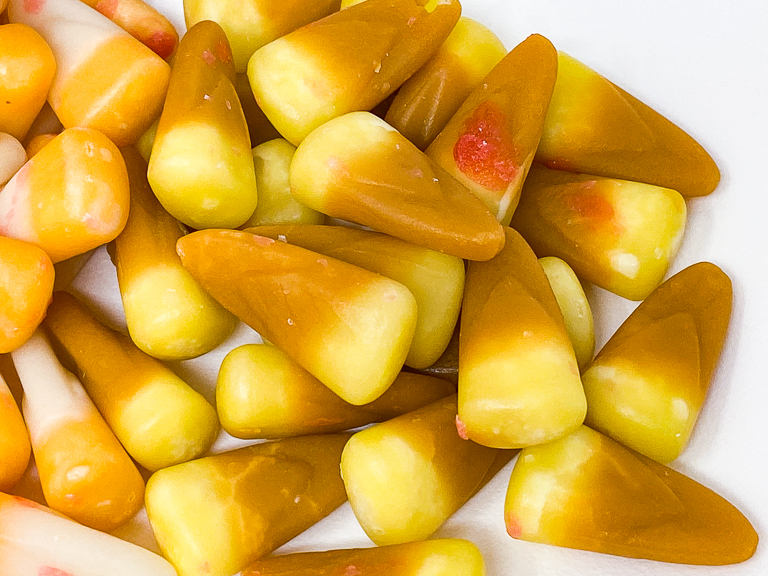 What are our overall thoughts? Let's see, Theresa spat 5 of 6 out. Ian spat 4 of 6 out. Alli didn't spit any out, but frequently commented that "this one is not good". In the end, the Cranberry Sauce was the only flavor that any of us could say we actually enjoyed. Ian asked if we could throw them all right into the trash. Not quite yet. I think it's better to share! 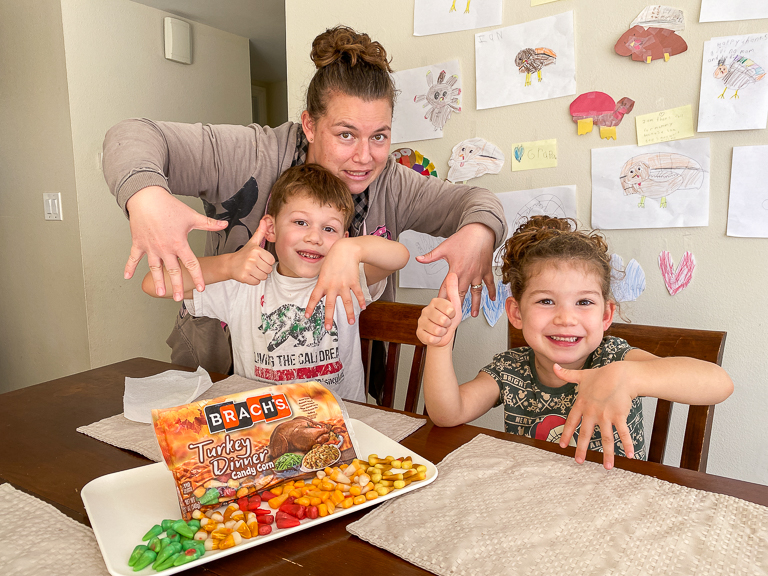 Grammy and Grandpa! Want to come taste these with us?
They went through each of them, also agreeing that the Stuffing flavor is the worst, That quote from the front of the packaging "Deliciously crafted confections" was a swing and a miss today. But you know, it did follow through on "making memories sweeter". Not in the way they're probably intending though. We all laughed and groaned about how bad these were, which is going to make this a fun memories when I think about it later. 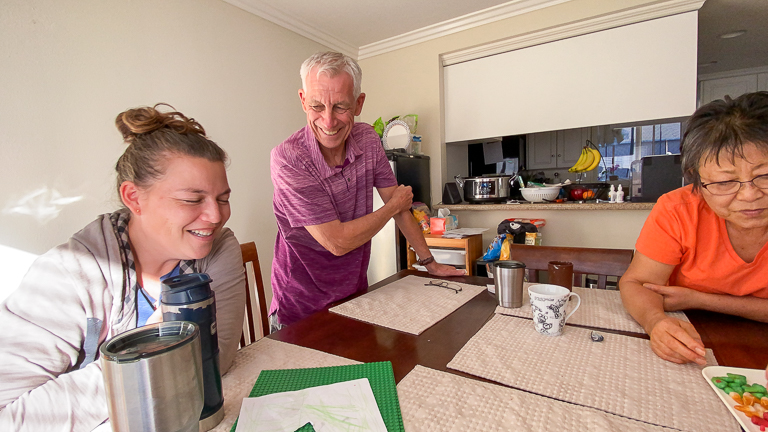 Let's check in with the Colorado family and see how they're liking it.

The faces say it all. There was a lot of spitting in the trash can there too. The only edible one was Cranberry. 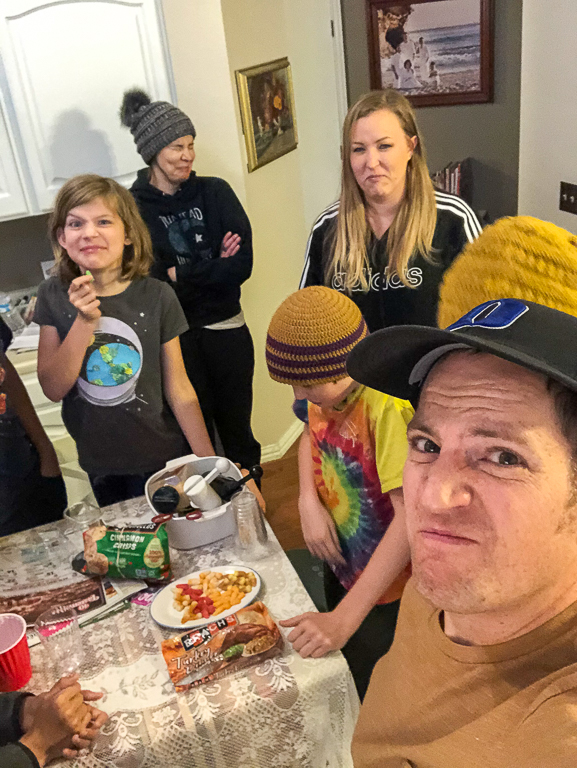 Well it was something... I really don't want to end these Thanksgiving Treats on that note. Let's see if I can find one more thing... 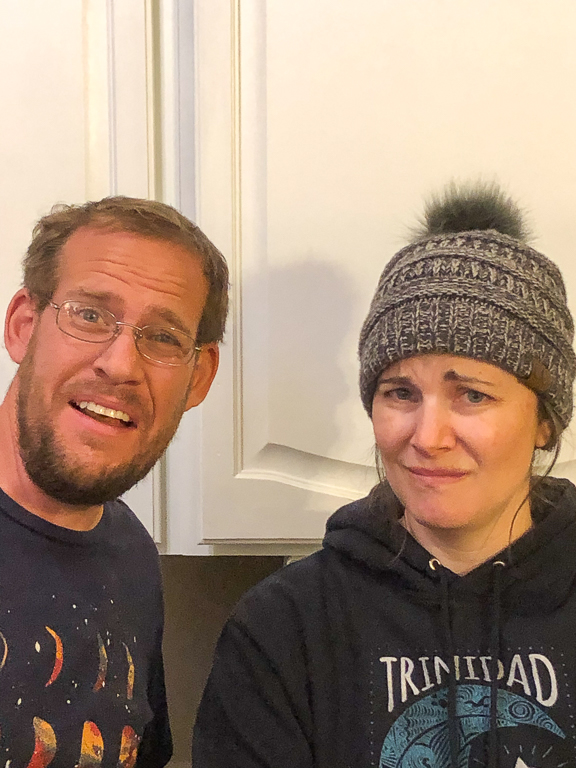